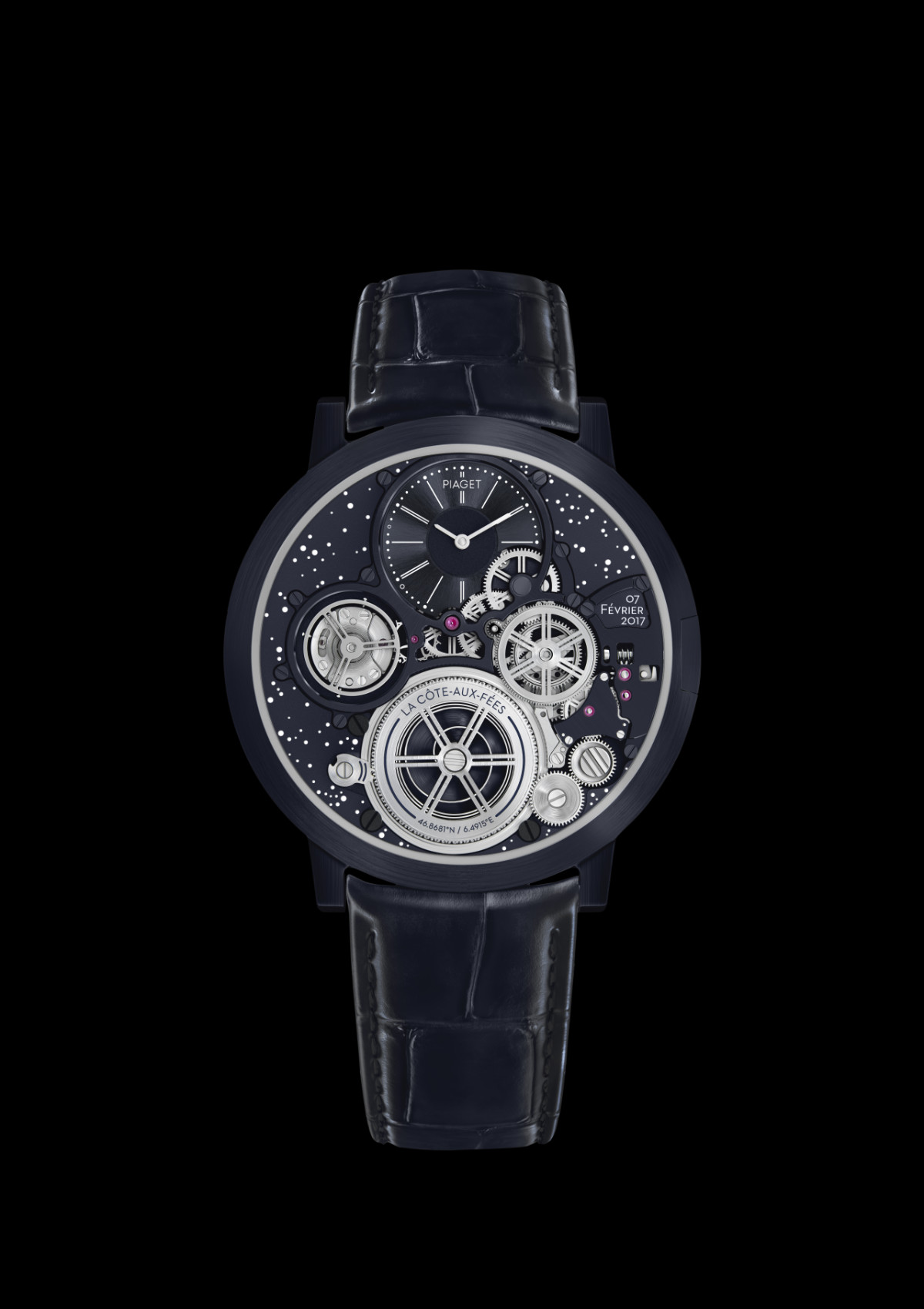 Piaget unveils a unique Altiplano Ultimate Concept (AUC), a beacon of technology and design which pays tribute to the first “beats” of this ground-breaking timepiece. This one-of-a-kind watch follows last years’ release of the AUC with a green dial in reference to La Côte-aux-Fées, where it all started.

The Altiplano Ultimate Concept (AUC) started as an idea, a vision, a dream. Not everyone believed it was possible, but the philosophy at Piaget has always been to always push the limits, to always challenge what exists, and as Valentin Piaget always like to say, “to do what has never been done before.” Piaget’s engineers, watchmakers, and designers continued to search for solutions to make the dream come true and after four years of research and development, on February 7th, 2017 at 7:47 pm, the AUC took its first “beat”. 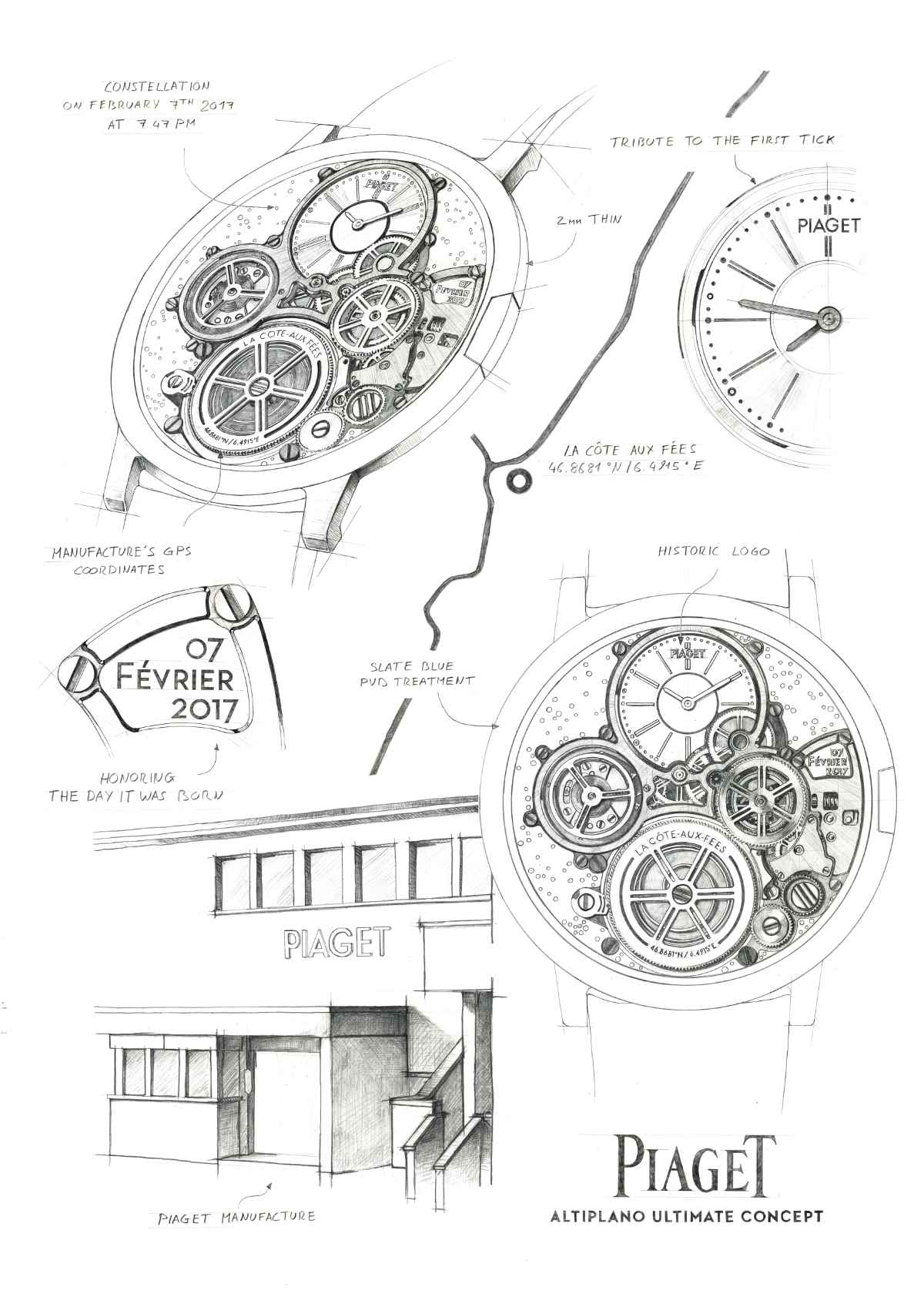 THE JOURNEY SO FAR

The creation of ultra-thin timepieces has been part of Piaget’s know-how since the very beginning. The Maison’s founder, George Edouard Piaget, was supplying famous watch brands with ultra-thin watch components as early as 1874, an expertise that brought him respect and recognition in the watchmaking community in the Jura Mountains – the birth of Swiss watchmaking – and far beyond.

In 1957, the Maison introduced the world’s thinnest mechanical movement, the Calibre 9P that measured a mere 2mm in height. The 9P was the start of a series of record breaking ultra-thin movements, including the 12P in 1960, the 1200P and the 1208P in 2010, and the ground-breaking 900P in 2014. Obtaining world records, has never been the driving force at Piaget, it has always been about the quest for uttermost elegance. 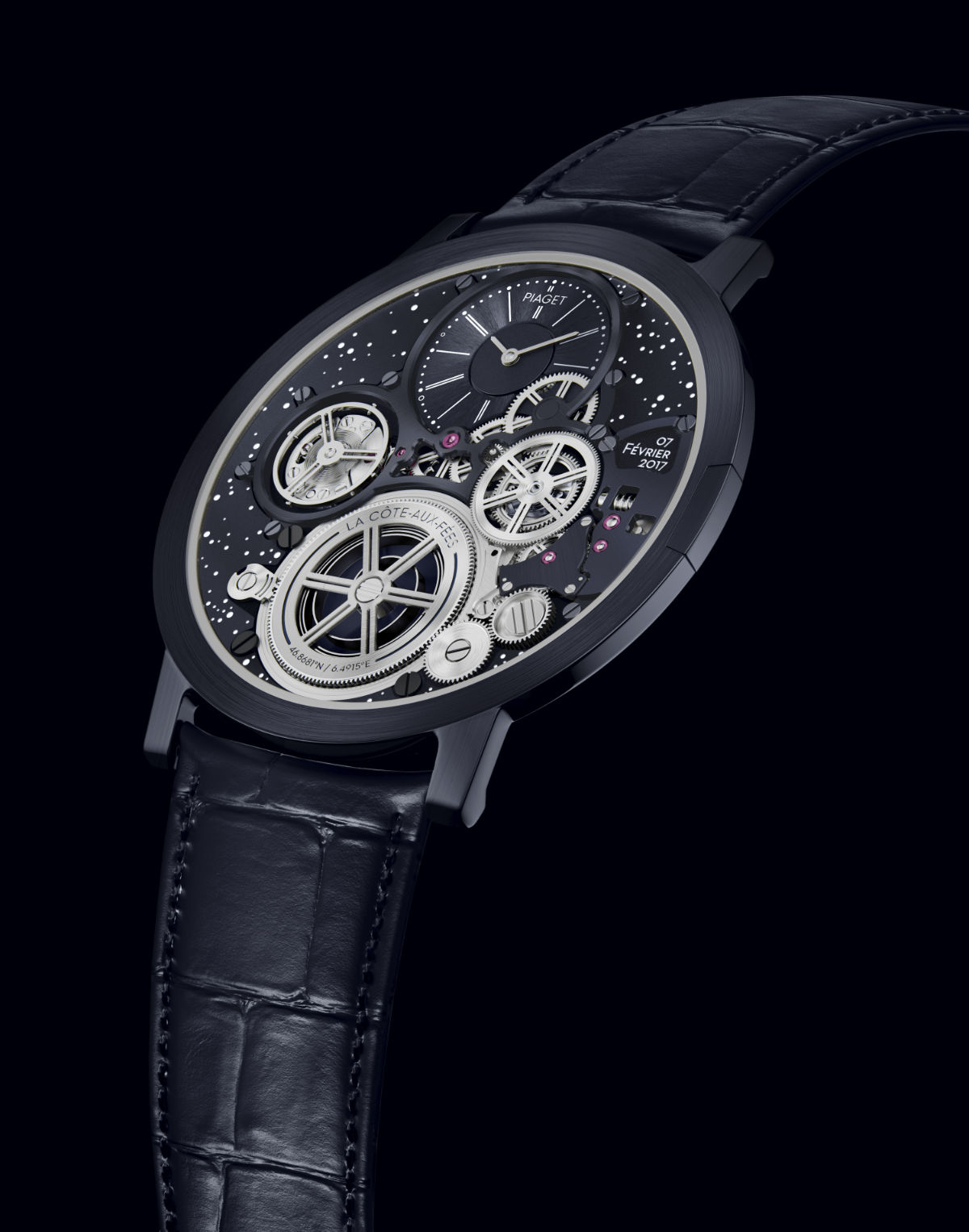 The AUC was first presented in Geneva at the Watches & Wonders fair in 2018 to huge acclaim from the watch community and the world’s press. Only two years later, Piaget made it reliable for everyday wear. In April 2020 the first timepiece left the Piaget workshops for the big wide world, and in November of the same year, the timepiece won the prestigious Aiguille d’Or prize from the Grand Prix d’Horlogerie de Genéve. Since then, collectors all over the world have been enjoying this feat of micro-mechanical engineering that remains one of the world’s thinnest timepieces today. 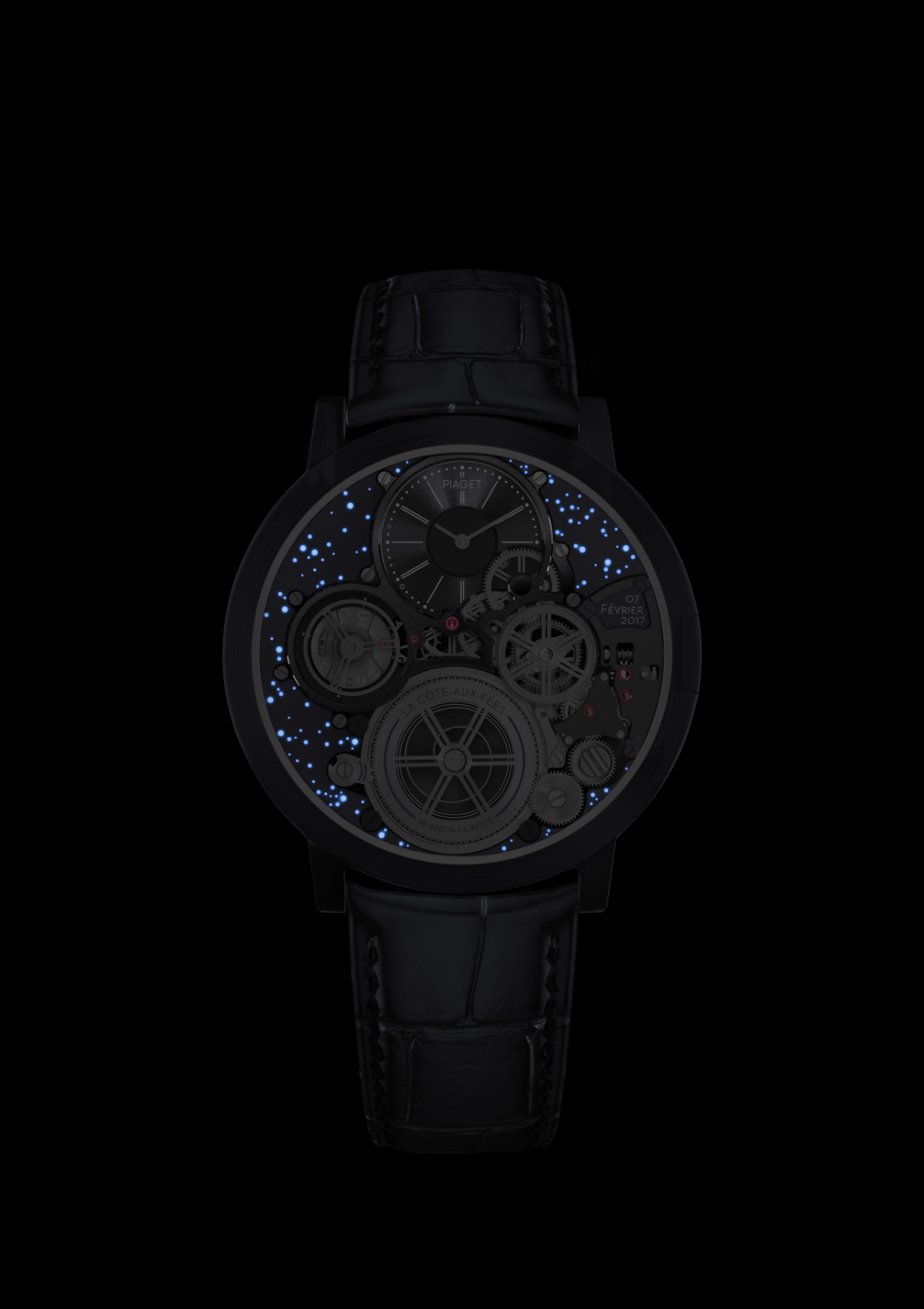 A FEAT OF TECHNOLOGY

Most timepieces are made up of four layers: 1) the bezel and crystal, 2) the dial and hands, 3) the movement, and 4) the case back. Piaget removed this four-layer construction to create a fusion of components with the bridges, dial, and hands, on one side, and the case back, movement, main plate and bezel on the other, all coming together as one. This fusion of watchmaking construction features five patents that have enabled the Maison to create a timepiece that is a mere 2mm in height, from the underside of the caseback to the top of the sapphire crystal. 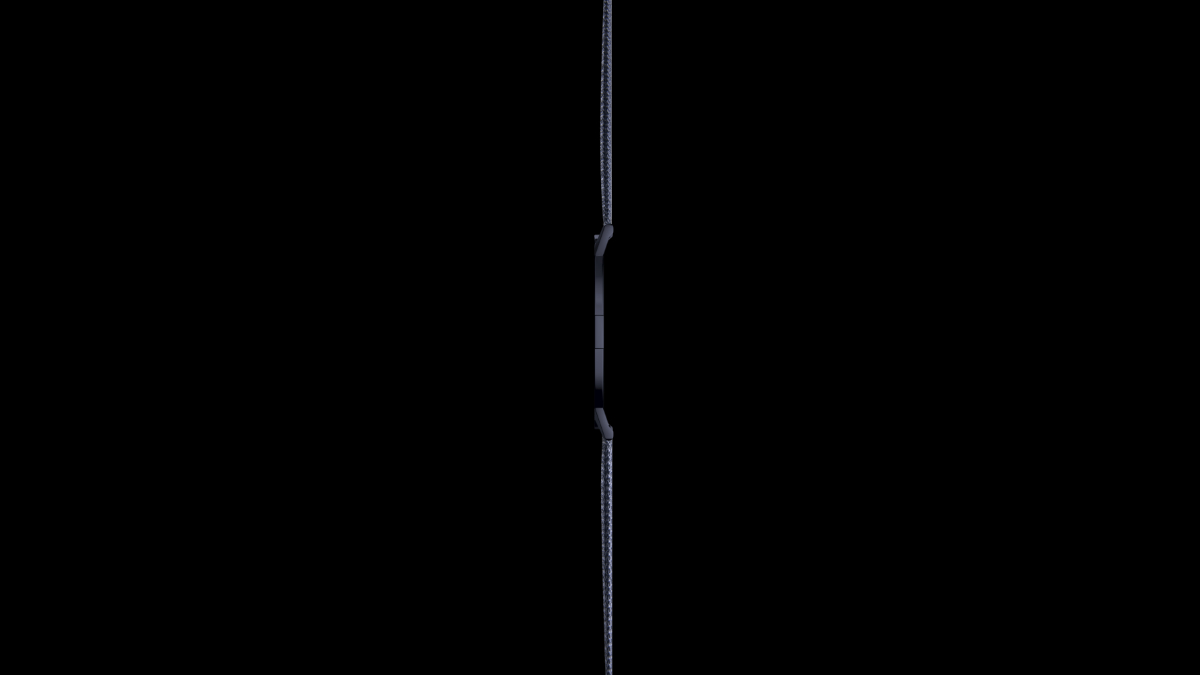 The new AUC unique piece is a celebration of the AUC adventure with several stylistic details that recall this incredible journey. Starting at the top of the dial, the Piaget logo is in a historic font that is the same typeface used in the logo above the manufacture in La Côte-aux-Fées, the village where Piaget was born and remains today. Two enlarged circles sit among the dots of the minute ring, marking the time – 7:47 – when the AUC first came to life. At 2:30, the birthday of the AUC – 7th February 2017, is inscribed in a small window. And a “La Côte-aux-Fées” inscription has also been engraved onto the ratchet wheel along with the manufacture’s GPS coordinates. Completing the tribute, the background of ground of the dial features stars illuminated with Super-LumiNova that
replicate the sky above La Côte-aux-Fées es at the exact date and time of the AUC’s birth. 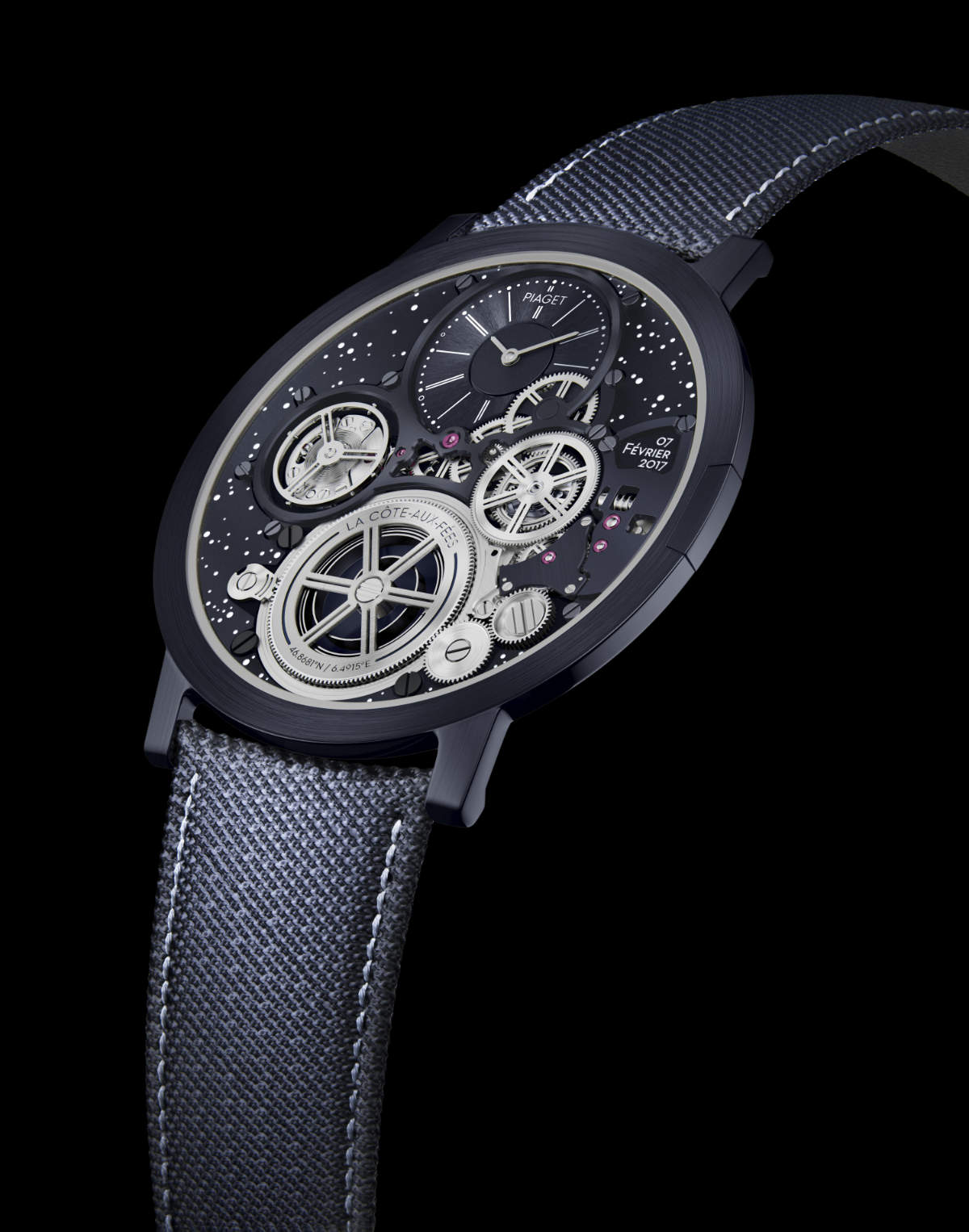 The caseback, bezel and lugs have all been satin brushed making a nice contrast to the case band that is polished. The timepiece is paired with an extremely thin dark blue alligator strap that does not exceed 1.5mm, in keeping with the watch’s ultra-thin design. The timepiece comes with a power reserve of 40 hours and is a spectacular fusion of horological elements.

THIS ONE-OF-A-KIND TIMEPIECE, WITH ITS DESIGN THAT HONOURS LA CÔTE-AUX-FÉES AND THE VERY FIRST BEAT OF THE AUC, ATTESTS TO THE MAISON’S LEGITIMACY AND INVENTIVENESS IN PUSHING THE LIMITS OF CREATIVITY AND REFINEMENT WHERE DESIGN AND TECHNOLOGY BECOME ONE. 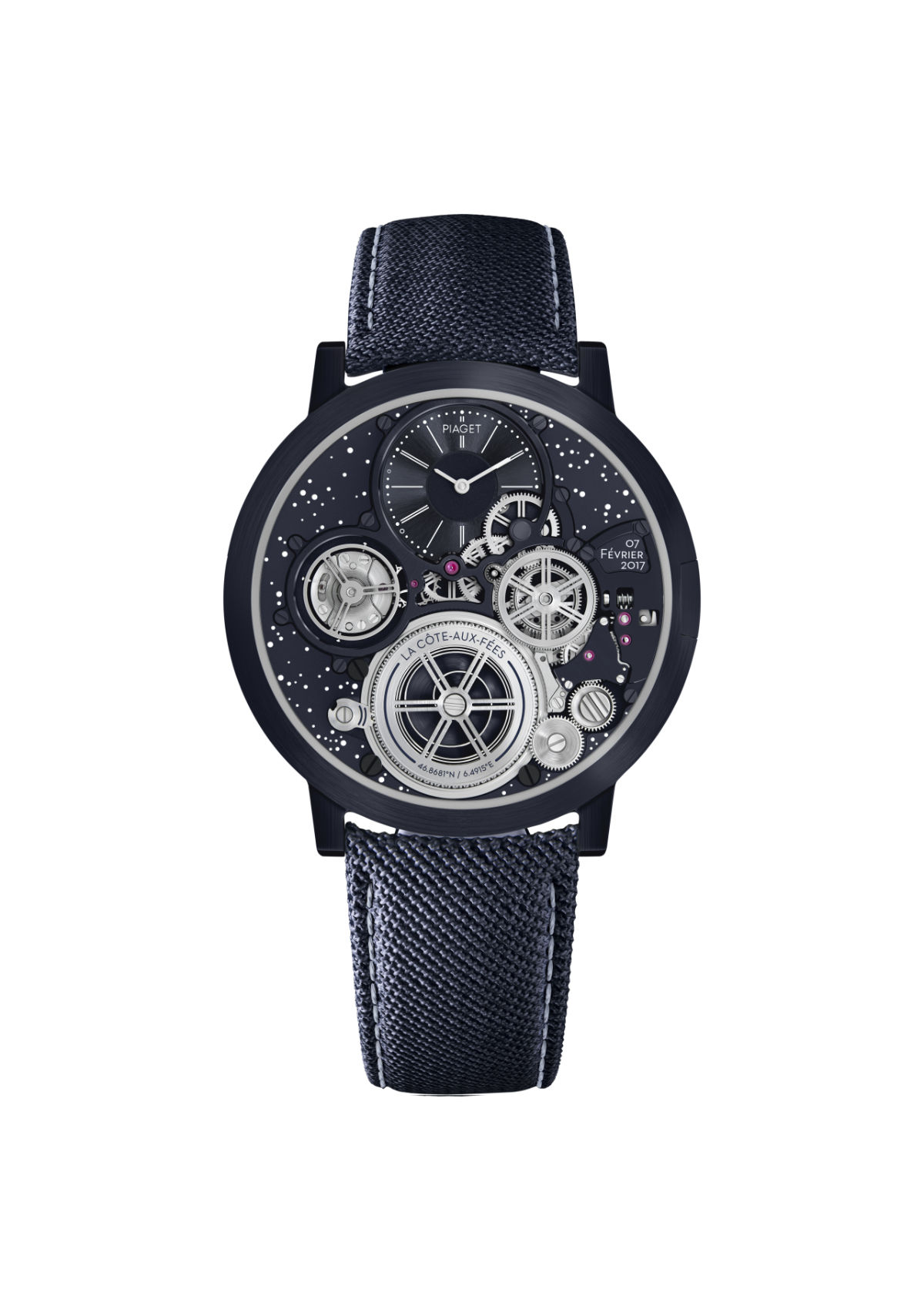 Rectangular-shaped crown recessed into the caseband

Monobloc bezel integrated into the frame with 0.2mm thick crystal

"La Côte-aux-Fées" and the Manufacture's coordinate engraved onto the ratchet wheel.