For the very first time, Piaget has created this year a rainbow setting with a spectacular array of green tsavorites and coloured sapphires ranging from red, orange, yellow, blue, indigo and violet and taking centre stage around the bezel and on the lugs.

Sourcing progressively-sized, coloured gemstones of this calibre is extremely challenging. Piaget’s gemmologists searched long and hard for the exact colours, carat, cut, and clarity. The setting of this piece also demanded particular patience and expertise from the Maison’s gem-setters who needed to create the perfect colour and size transition from one gemstone to the next using an intricate technique called “Sertie Descendu” that magnifies the brilliance of each gemstone. 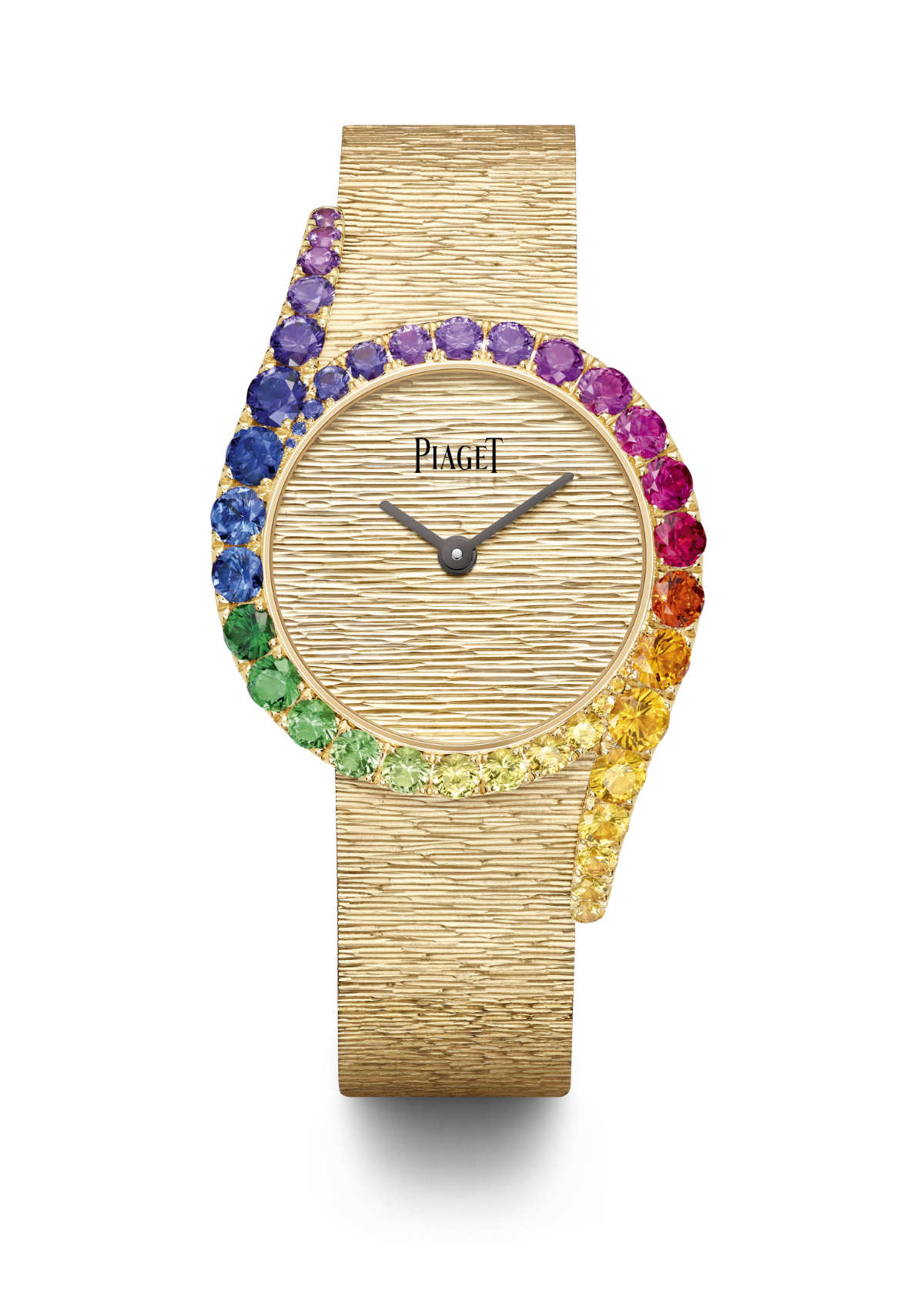 The Limelight Gala Precious Rainbow watch showcases a 32mm rose gold case with a matching dial. Both the bracelet and the dial have been decorated with Piaget’s signature Palace Décor. This timepiece is the perfect fusion of the Maison’s expertise in watchmaking, goldsmithing and gem-setting. 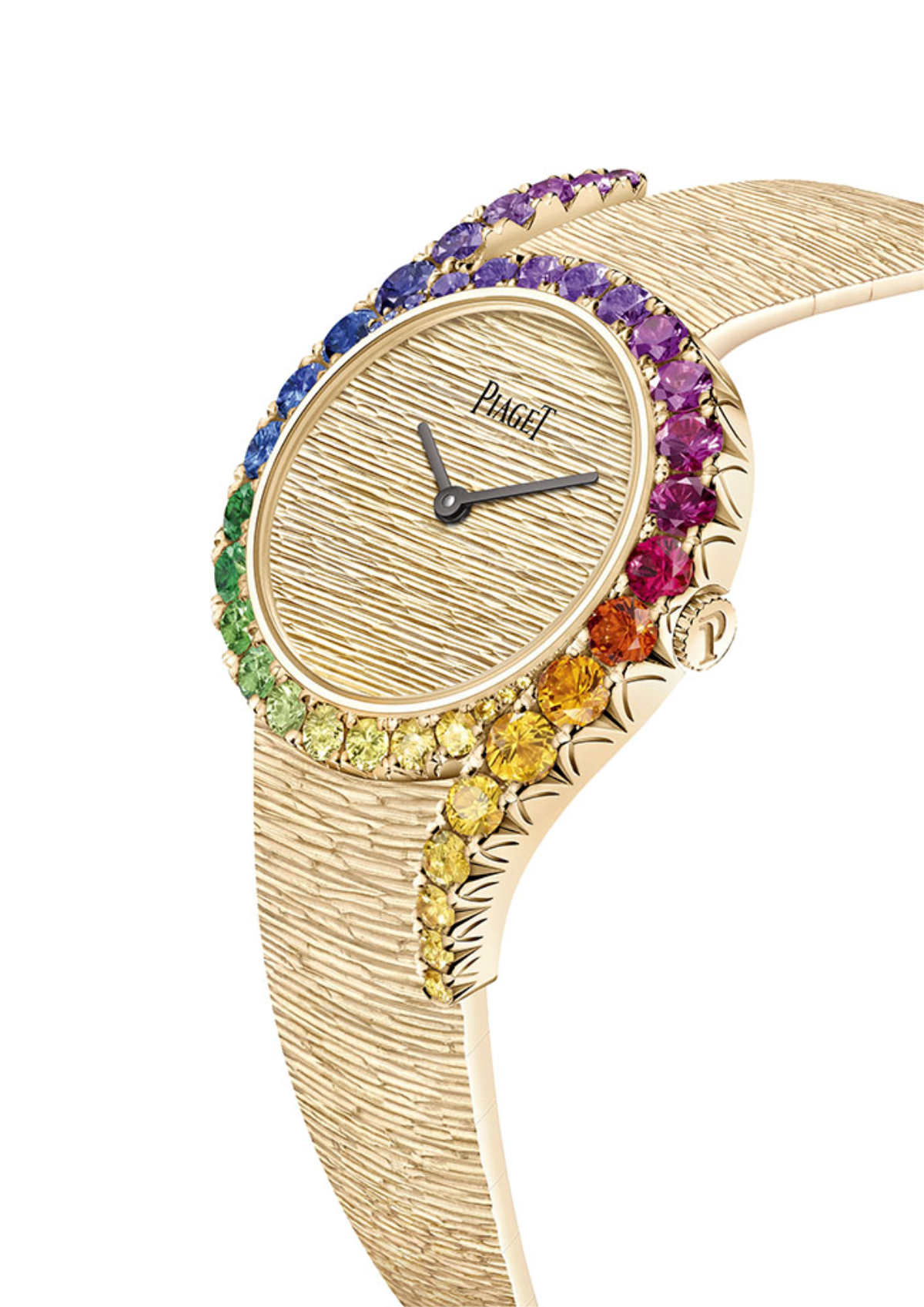 Piaget is one of the rare Maisons that has the savoir-faire to craft hand-made gold bracelets. The work of a chainsmith is similar to that of an Haute-Couture dressmaker. The artisan will start with hundreds of gold links, which will be tightly assembled. The next step is the soldering of the countless miniature links that will result in a bracelet of remarkable suppleness. Only a few artisans, who work in Piaget’s “Atelier de l’Extraordinaire”, have the expertise to hand-engrave this pattern. The decoration alone took two hours to complete on the dial and eight hours to finish across the bracelet.

Piaget’s Limelight Gala is a celebration of extraordinary women.

The Altiplano Ultimate Automatic is rich from a legacy in ultra-thin movements that date back to 1957 and 1960 – with the birth of the historically thin 9P and 12P movements – the Altiplano collection continues the journey of the Maison’s savoir-faire in ultra-thin watchmaking.

The Altiplano Ultimate Automatic has an unusual and innovative construction that merges the case with the movement. This watch displays an ex-centred blue dial at 10 o’clock and a beautiful view on the movement. In spite of the watch’s thinness, the dial has incredible depth thanks to a reverse assembly of the bridges on the dial side of the watch. The raising of the bridges also prevents the watch from stopping when pressure is exerted on the sapphire crystal. The crystal will naturally and safely bend during everyday life or underwater, for example. So, instead of the crystal touching and stopping the hands, it is blocked by the raised bridges. This invention is protected by a patent that covers several of Piaget’s ultra-thin movements. 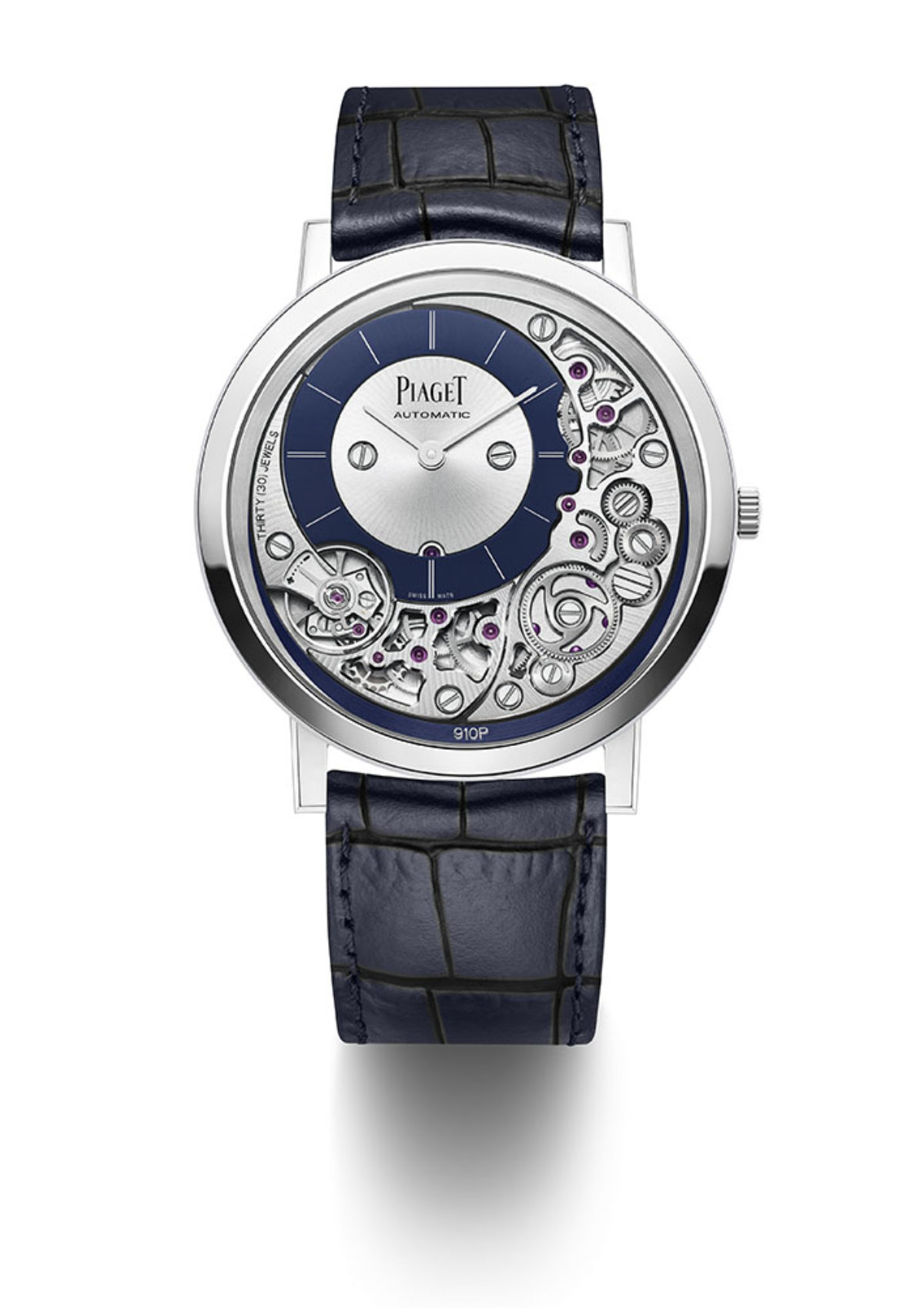 The suspended barrel is held by one single bridge on the dial side and a peripheral rotor made of blue-coloured 22K gold that is highly visible as it spins around the outside of the movement, winding the watch as it goes. The rotor is made out of gold to give enough weight to make it turn efficiently and its peripheral design helps Piaget’s watchmakers to shave even more millimetres off of the movement’s height.

Receiving these watch prizes is such an honour for Piaget and its artisans and encourages the Maison to cultivate its savoir-faire and expertise to continue to innovate. 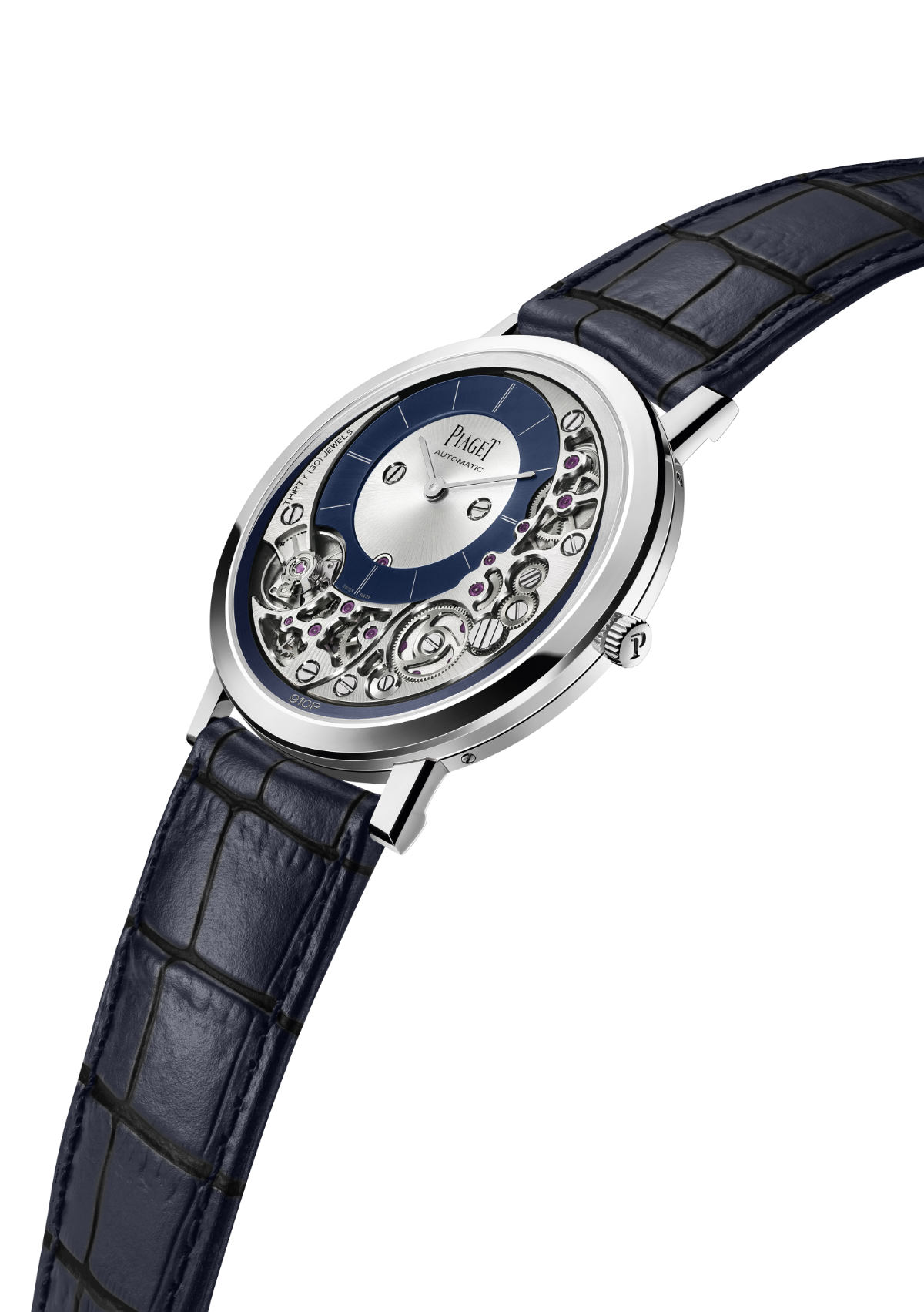 Piaget epitomizes daring creativity – a quality that has continued to permeate through the Maison since its beginnings in 1874. From his first workshop in La Côte-aux-Fées, Georges-Edouard Piaget devoted himself to crafting high-precision movements in a feat that formed the very foundations of our pioneering name. In the late 1950s, Piaget unveiled the ultra-thin movements that would later become the Maison’s trademark and the cornerstone of the Altiplano collection. As a true innovator of the watch and jewellery world, Piaget strongly believed in creativity and artistic values. It is within the walls of our “Ateliers de l’Extraordinaire” where master artisans continue to harness rare skills that have been preserved and perfected from generation to generation, transforming gold, stones and precious gems into dazzling works of art. Through its pursuit of masterful craftsmanship, the Maison has created emblems of daring excellence channelled into its collections including Piaget Altiplano, Piaget Polo, Limelight Gala, Possession, Sunlight, Piaget Rose and Extremely Piaget.

In a unifying spirit and based on the GPHG's founding values of neutrality, independence and universality, 2020 sees the establishment of the Academy of the Grand Prix d’Horlogerie de Genève (GPHG). A major initiative, the Academy invites experienced men and women who believe in the common destiny of watchmaking to take part in the various stages of watch selection. It is composed of several hundred members, all experienced and significant stakeholders in the key watchmaking-related sectors, divided into colleges and forming a vast network of ambassadors worldwide. Members of the Academy have the fundamental mission of proposing the eligible watch models – in parallel with the traditional brand entries – and taking part in the various votes to determine the winners.