Girard-Perregaux unveiled the Laureato 38mm Copper, a mid-sized, unisex model with a fascinating dial. Termed 'copper' the appearance of the dial is complex and dynamic, evincing different shades depending on the available light source. With over 230 years history, Girard-Perregaux has amassed vast experience, skilfully utilising light for the delectation of watch aficionados. Despite being a new model, this latest creation remains a Laureato, a byword for ageless design since the inaugural version was first launched in 1975.

An appreciation of light

La Chaux-de-Fonds is the home of Girard-Perregaux as well as a Unesco World Heritage Site. The city has been dedicated to watchmaking since the 18th century. The streets, arranged in a grid-like pattern, are lined with tall buildings fitted with large windows. The architecture of the city was purposely designed to capture available natural light, a useful resource when working at a watchmaker's bench. For over 230 years, Girard-Perregaux has appreciated the value of natural light and its positive influence on the timepieces it continues to produce.

With the arrival of the Laureato 38mm Copper, the Maison, once again, shows its capacity to master light. The dial is not merely a one-dimensional surface, but encompasses a Claus de Paris motif. This traditional pattern is composed of multiple pyramidal structures that engage with light, bestowing tiny pockets of brilliance and shade. Viewing an image of the dial does not adequately convey how it looks when affixed to the wrist. While the dial is termed 'copper', its dynamic character is far more complex, transitioning from tawny brown to pink-toned gold with multiple shades in between. 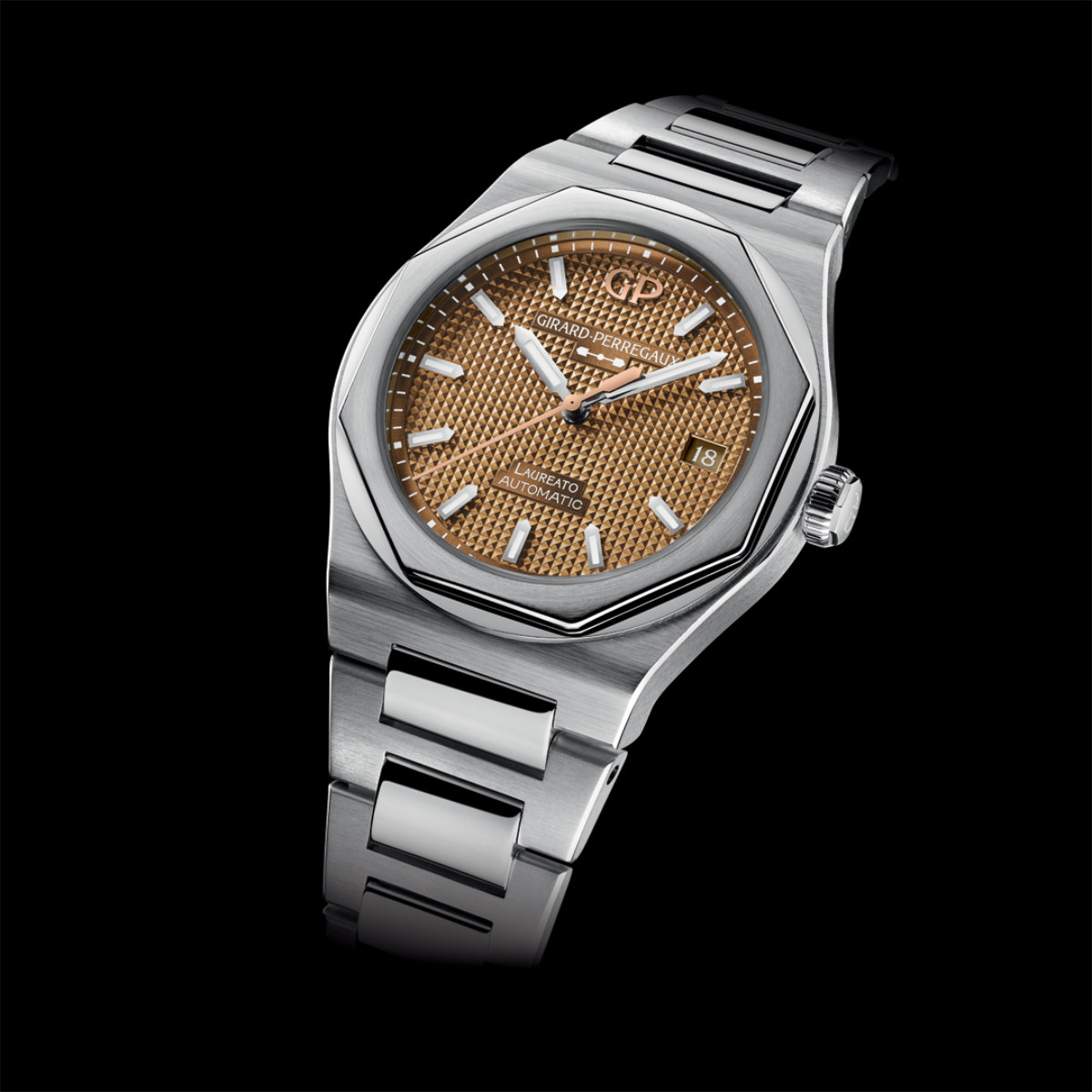 Reintroducing the 38mm with a new dial but reassuringly Laureato

Captivating onlookers with its metallic-themed dial, the Laureato 38mm Copper is mid-sized and unisex, sidestepping gender stereotypes. Baton-type hands and index enunciate the hours and minutes. These elements uphold the Laureato's timeless design language, much loved by purists since the inaugural model was unveiled in 1975. Both the hands and indexes are treated with luminescent material, augmenting readability in dim light.

A golden central sweep seconds hand sits in harmony with the copper dial, reinforcing the metallic yet warm character of the composition. Moreover, the dial is complemented with the GP logo, again depicted in golden hues. The Maison's single bridge emblem makes an appearance, providing a respectful nod to the iconic movement of the Tourbillon with Three Bridges from the 1860s.

Although the Laureato 38mm Copper is unequivocally new, its origins remain clear to see. The beloved octagonal bezel and fluid-like integrated bracelet, cascading downwards around the wrist, are signature details which continue to endure. Encased in stainless steel, the Laureato is a byword for versatility, proving suitable for all roles, whether sporty, casual or formal. It is this consistent approach to design which has endowed the Laureato with an ageless appearance that has remained immune to changing fashions. 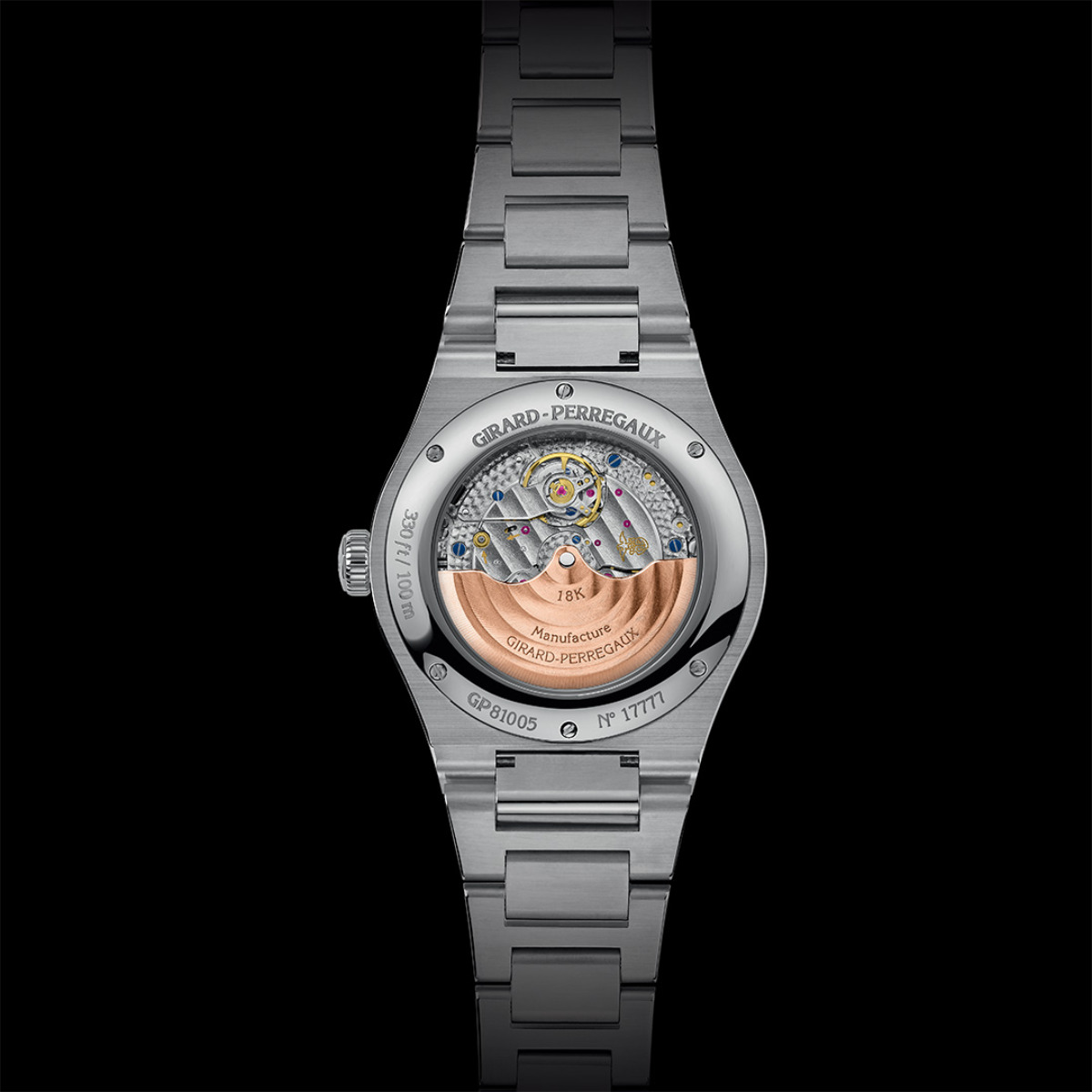 Housed in a slender case, just 10mm in height, the Laureato 38mm Copper is equipped with a self­ winding movement, the Calibre GP03300. Visible via a see-through case-back, the in-house movement is enriched with a plethora of refined details, perpetuating the Maison's reputation for exquisite finishing. Some components feature no less than four different decorations ranging from bevelling, mirror-polishing, satin finish, snailing, sunray finish to various engravings. The bridges are decorated with straight Cotes de Geneve and the pink gold oscillating weight is embellished with circular Cotes de Geneve. 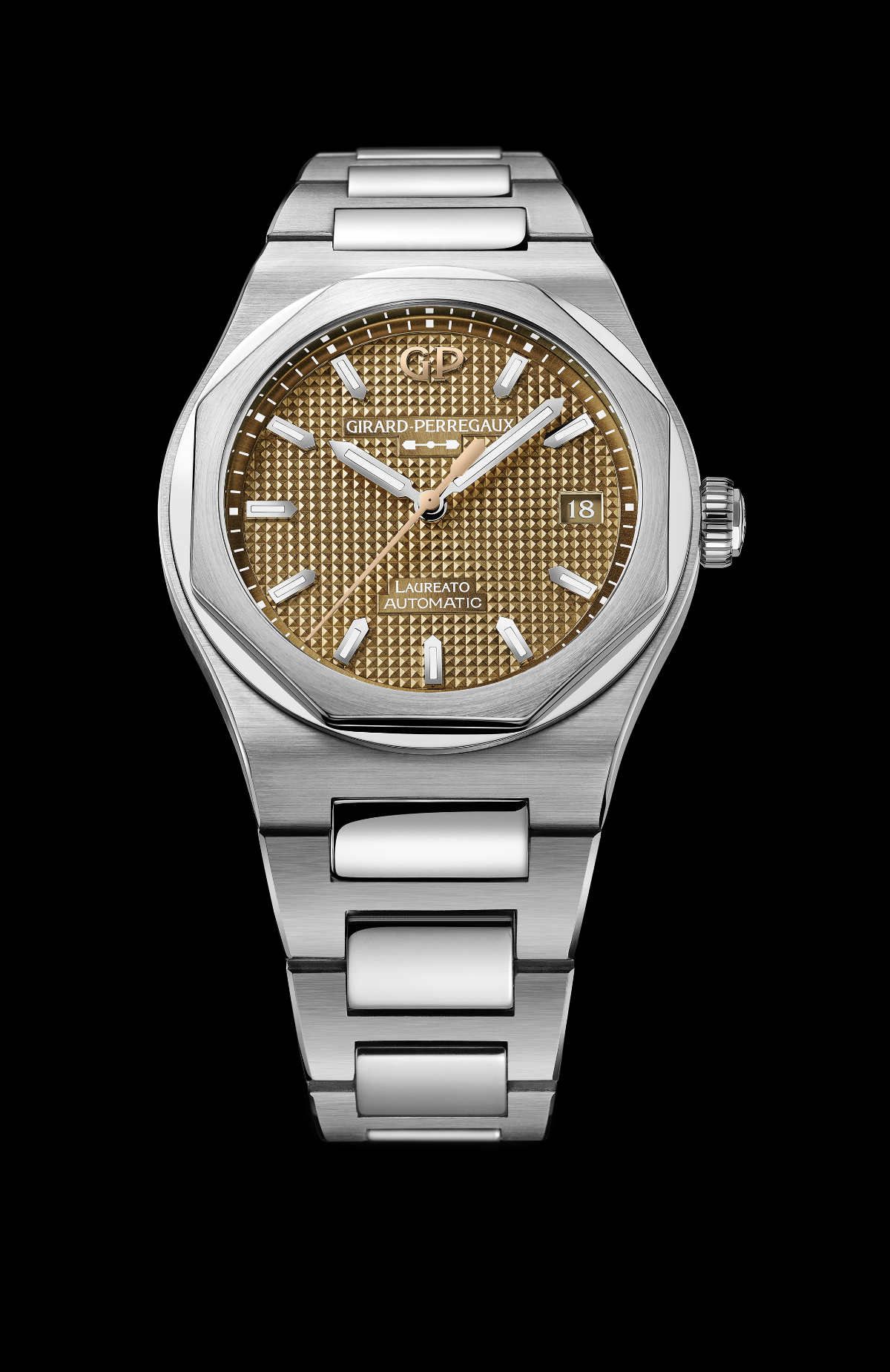 Laureato, a lesson in design

In terms of design, the 1970s were extraordinary. Creativity imbued a variety of objects with timeless aesthetics and notable functionality. This prowess for design was manifest with the styling of several highly original watches and the era continues to be acknowledged for its visionary approach to design. Indeed, during this era, several prestigious brands released watches encased in steel with integrated bracelets. However, only a few designs from this period have retained their eye appeal despite the onset of years.

From the outset, the design of the Laureato united a number of different shapes to form a distinctive, yet cohesive, look. Each Laureato comprises an octagonal bezel that sits atop a circular ring which in turn is positioned above an angular tonneau-shaped case. But despite having geometric, clean-cut lines, the Laureato's case also has a gentle character, reminiscent of a rock shaped by nature and devoid of harshness. Throughout the composition there is an exquisite interplay between polished and satin finished surfaces. Both finishes are clearly defined and discrete from one another, thereby optimising the effect. Lastly, the exterior is completed with an integrated bracelet that ergonomically hugs the wearer's wrist, bestowing a comfortable fit. It is this assemblage of contrasting forms that has led to the Laureato's unique profile, making it instantly recognisable when viewed from afar.

At the time of its launch in 1975, the inaugural watch was called the 'Quartz Chronometer'. However, in Italy, the model soon became known among the cognoscenti as the 'the graduate (Laureato in Italian) of the school of Girard-Perregaux'. This affectionate name served as an acknowledgement of the model's prize-winning success and extraordinary precision. Ultimately, the name was adopted by the Maison. Coincidentally, the octagonal bezel sits atop the case, like a laurel crown sits upon the head of a laureate.

Over the years, subtle changes have been made to the design of the Laureato, but the essence of the original 1975 model has always been retained. In 2017, Girard-Perregaux released the fifth generation of the Laureato, a design that has been adopted for the new Laureato 38mm Copper.

There are some iconic buildings, cars and items of furniture produced during the 1970s that will always remain timeless exemplars of accomplished design. The Laureato, an in-house design, could be considered a worthy member of this exclusive club. 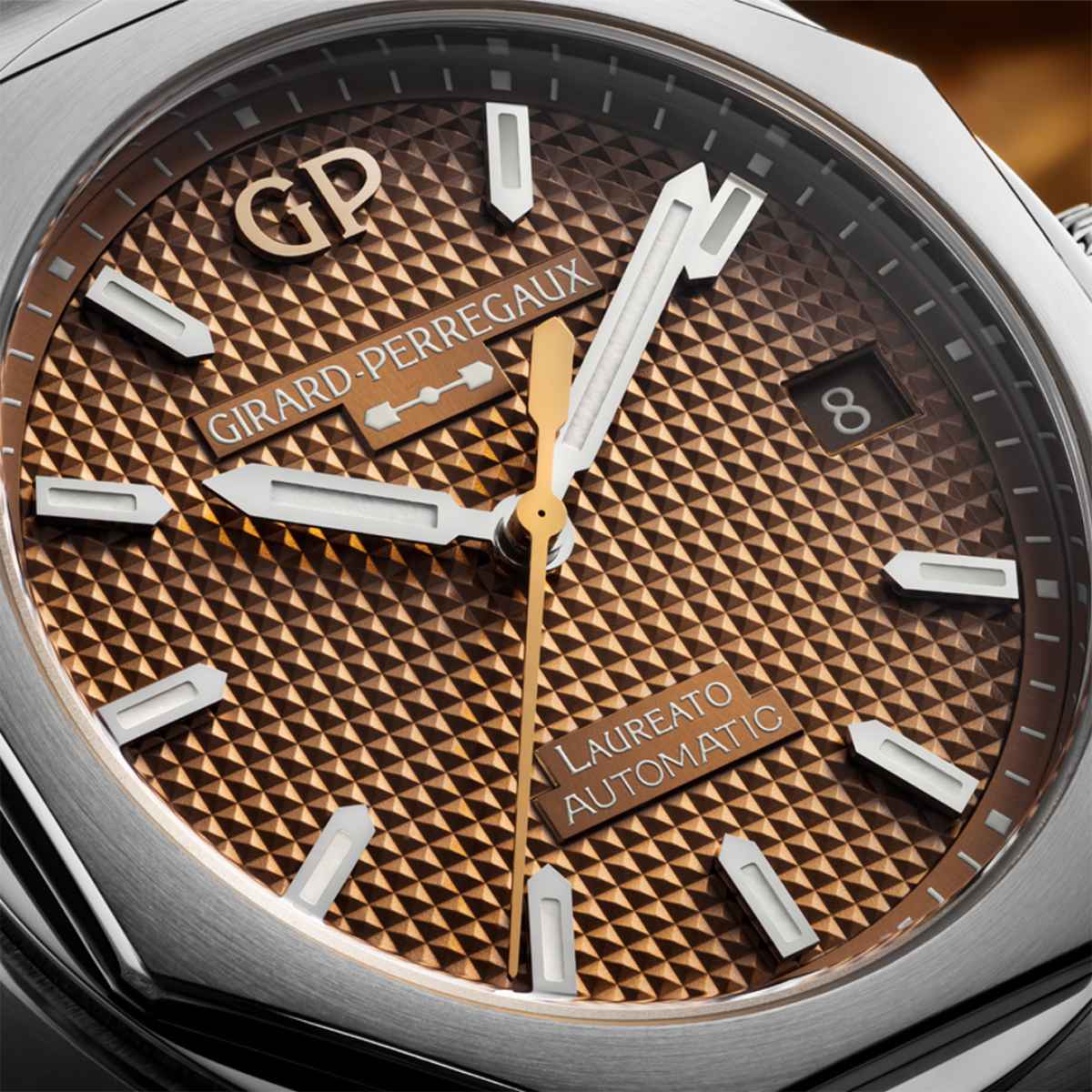 Innovation has always been at the heart of Girard-Perregaux's culture ever since it was founded in 1791. During the 1970s, the Swiss brand was at the vanguard of quartz timekeeping, a technology that promised a future of unprecedented precision. In fact, the frequency of 32,768 Hz was set by the Maison and subsequently adopted as the universal standard for quartz watches.

It was perhaps inevitable that the inaugural Laureato of 1975 was equipped with an in-house, COSC­ certified quartz movement, the Calibre 705. During this period, most of the traditional Swiss watchmaking industry was in decline, ill-prepared for the shift to battery-powered timepieces.

Quartz watches remain attractive to many clients, however, Girard-Perregaux has also produced in­ house mechanical movements for over 230 years, a claim few other watch brands can make. In 1995, as mechanical watchmaking began to enjoy a renaissance, Girard-Perregaux released the Laureato 8010 fitted with an in-house automatic calibre. Today, the Laureato 34mm is fitted with a quartz movement, while the 38mm, 42mm and 44mm models all feature in-house mechanical movements.

The 81005 Copper will be the only 38mm in the Laureato permanent collection. It will go on sale in December 2022 and will be available worldwide in limited quantities through all authorised Girard­ Perregaux retailers. 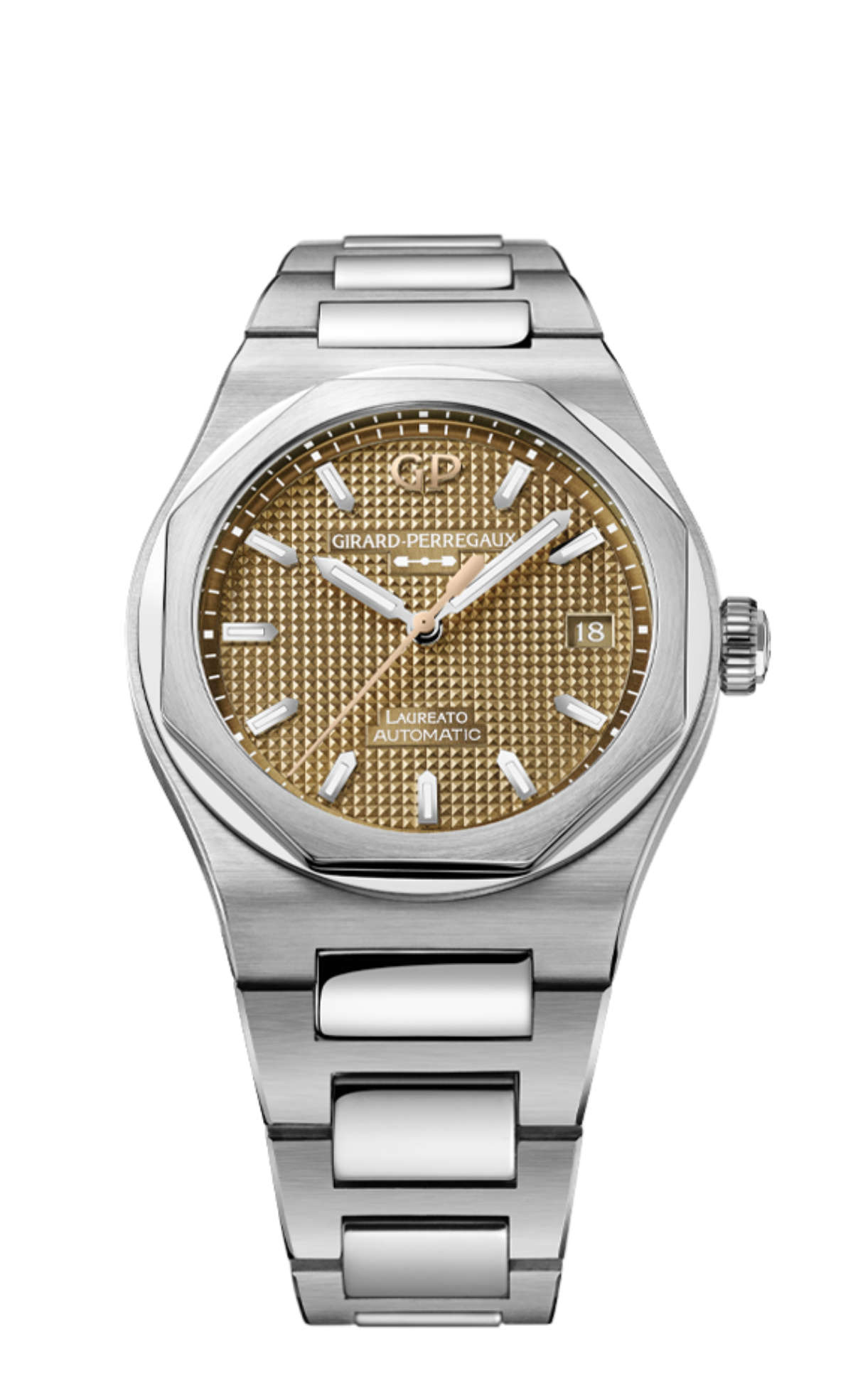 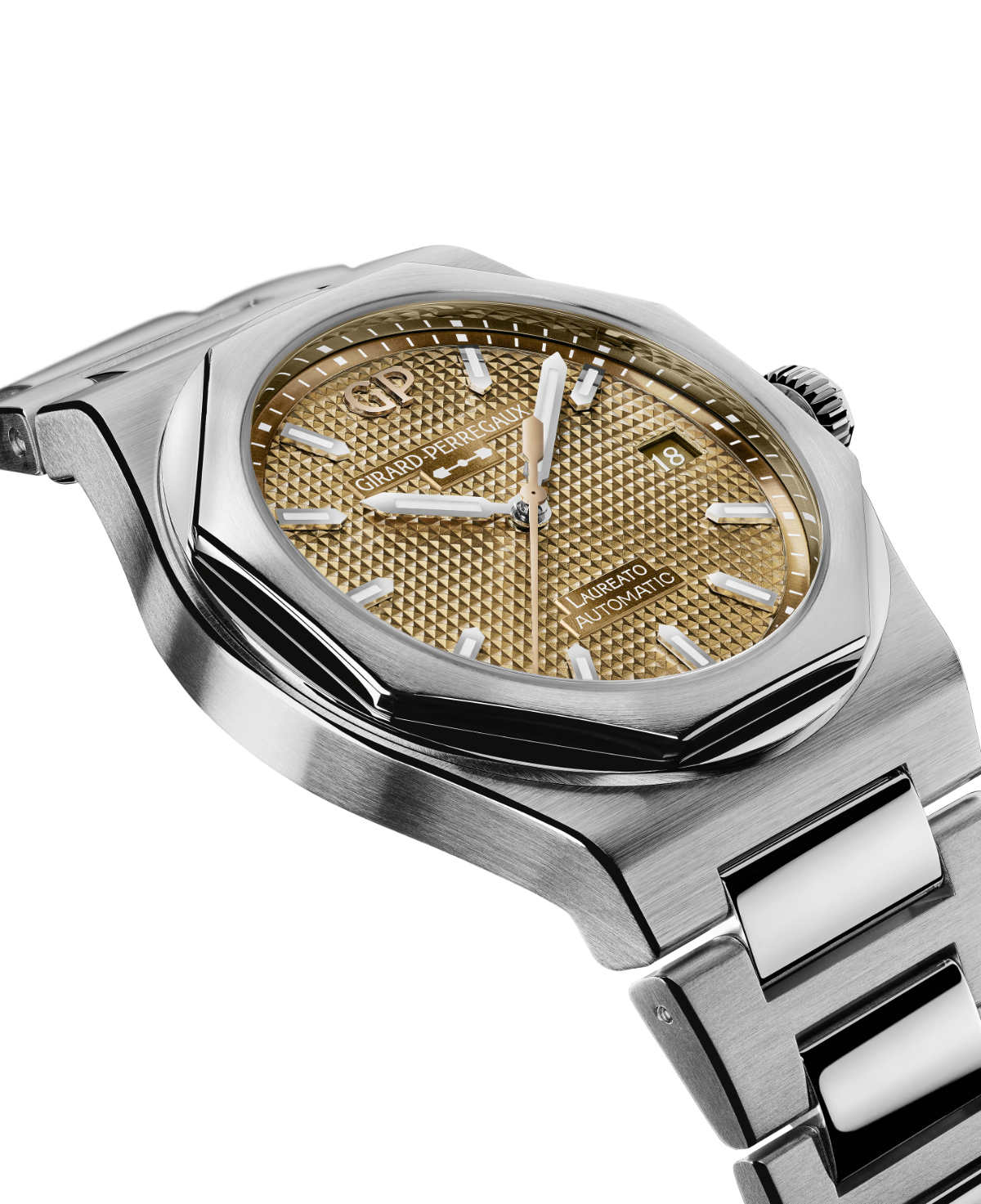 Founded in 1791, Girard-Perregaux is one of the oldest fine watchmaking manufactures still in operation and is appreciated by those in the know. Indeed, the firm's history is dotted with exceptional creations that skillfully blend aesthetics and functionality. These models include the iconic Laureato, born in 1975, as well as the legendary Tourbillon 'With Three Gold Bridges,' a watch that made the invisible visible, transforming bridges from just a technical element to an integral part of the timepiece - a first in watchmaking. Girard-Perregaux's place at the vanguard of horological innovation is confirmed by over one hundred recorded patents together with numerous prizes and distinctions. It remains one of the few watchmakers to retain Manufacture status for over two centuries by mastering all the required horological skills in-house and making watches infused with a notable degree of authenticity. While Girard-Perregaux respects its heritage, it continues to look ahead, embracing new technologies, state of the art materials, and fresh takes on iconic shapes.