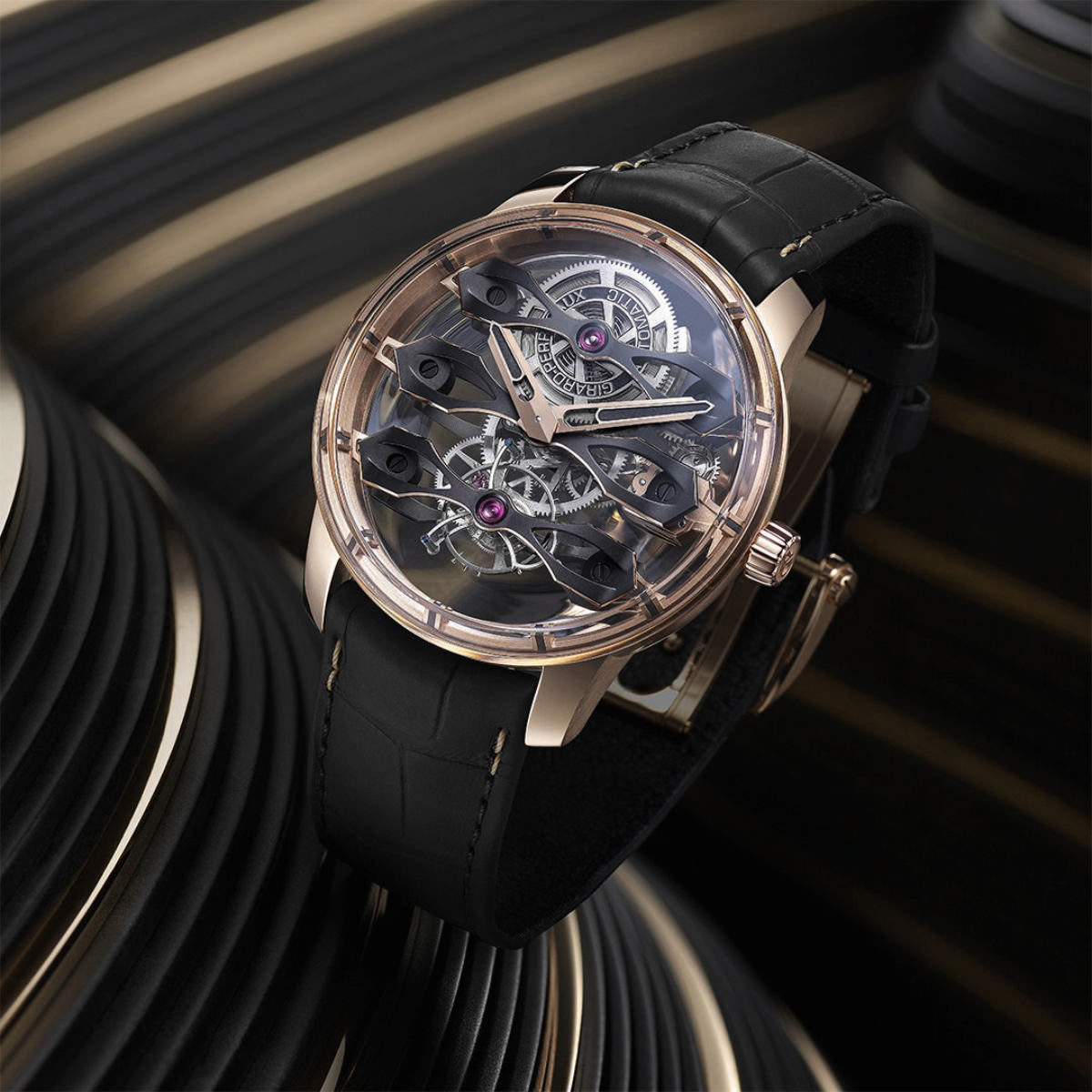 In 1867, Girard-Perregaux unveiled the 'Tourbillon with Three Gold Bridges' and an icon was born. Unusually, the bridges, three functional parts typically hidden from view, were made an aesthetic element. By taking this decision, the Manufacture became known for making the invisible visible. This approach has been employed on several subsequent Girard-Perregaux models. With the advent of the new Tourbillon with Three Flying Bridges, the Maison perpetuates this design philosophy but with a few fascinating twists along the way. 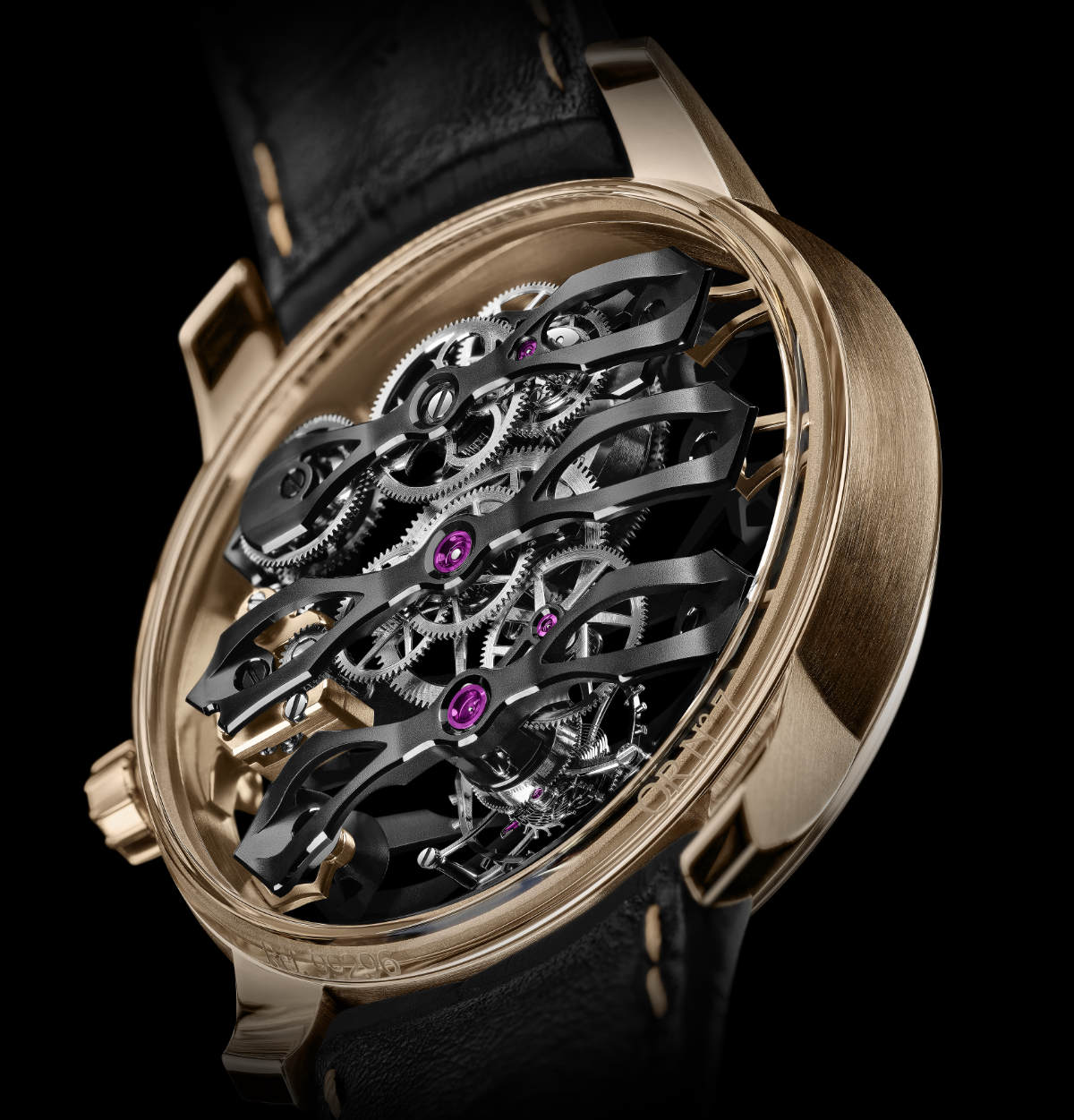 Last year marked the 230th anniversary of Girard-Perregaux. As part of its celebrations, the Manufacture was revisiting its iconic models and releasing a number  of new creations, often infused with a dose of modernity. The Tourbillon with Three Flying Bridges is endowed with three Neo Bridges formed of pink gold, the first time all three Neo bridges have been made from this noble metal. Interestingly, after releasing the Free bridge in 2020, the release of the new Tourbillon with Three Flying Bridges will be the final subfamily to join the company's Bridges collection.

The three bridges not only support the geartrain, barrel and tourbillon, they also act as the mainplate. The result is that the bridges appear to float in mid-air, seemingly untouched by gravity. This unusual construction required the Maison to affix the indexes to the flange which in turn is attached to the case. 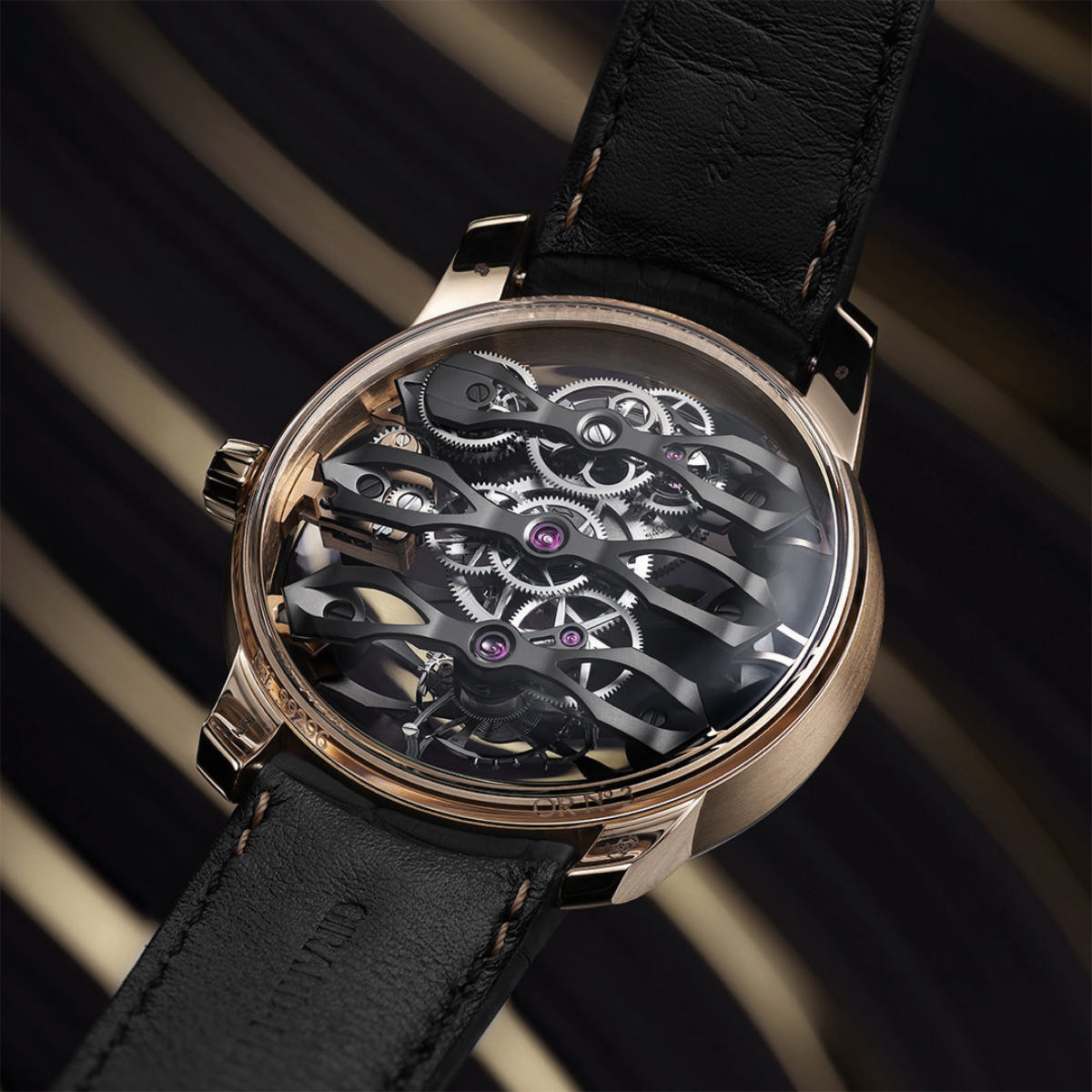 The upper and lower surfaces of the pink gold bridges are dressed in black PVD coating. They are the very antithesis of conspicuous consumption. Only the slim, vertical flanks of each bridge are exposed, providing a clue to their noble composition. Indeed, the bridges can be described as 'super discreet luxury' where only those in the know are aware of their precious nature. Each bridge is painstakingly chamfered by hand using a small piece of boxwood, a technique employed for hundreds of years. It takes a time-served artisan one full day to achieve a perfect finish. While the Tourbillon with Three Flying Bridges appears contemporary, it still upholds many of the traditional techniques synonymous with Haute Horlogerie. 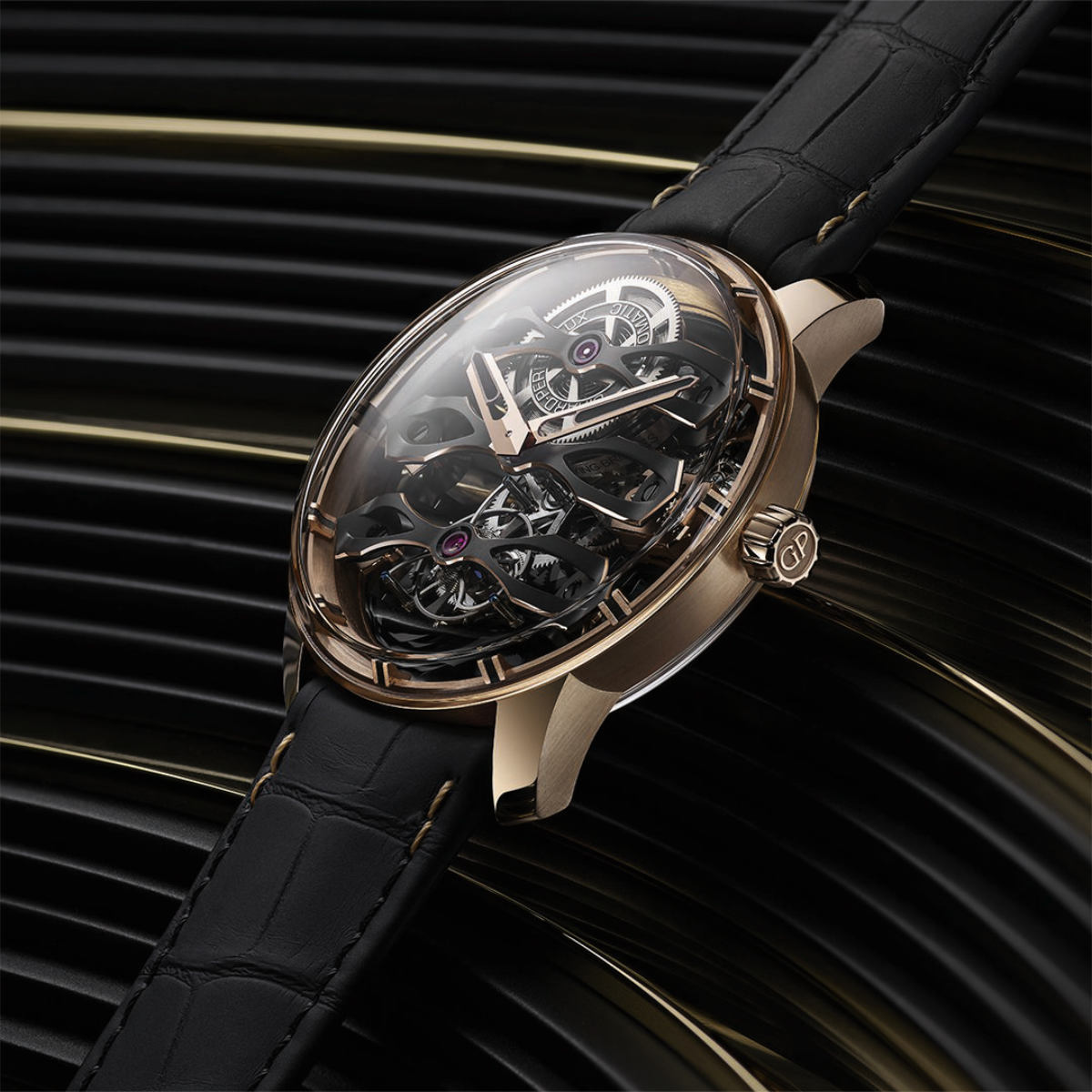 Patrick Pruniaux, CEO of Girard-Perregaux, remarks, "We wanted to create a watch that provides a bridge to our past but also demonstrates our vision for the future. It draws on the talents of our artisans and watchmakers, pairing traditional methods with innovative techniques. The Tourbillon with Three Flying Bridges embraces three-dimensional architecture, allowing the wearer to see many parts typically hidden away. Since its inception, Girard-Perregaux has made the invisible visible, something I expect it will continue to do for the next 230 years. However, where our team has chosen to  add a slight twist is by making the bridges from gold and then shrouding them in black PVD, save for their sides. It seems wonderfully indulgent, a trait synonymous with luxury, that will remain a secret to most people, except for those in the know." 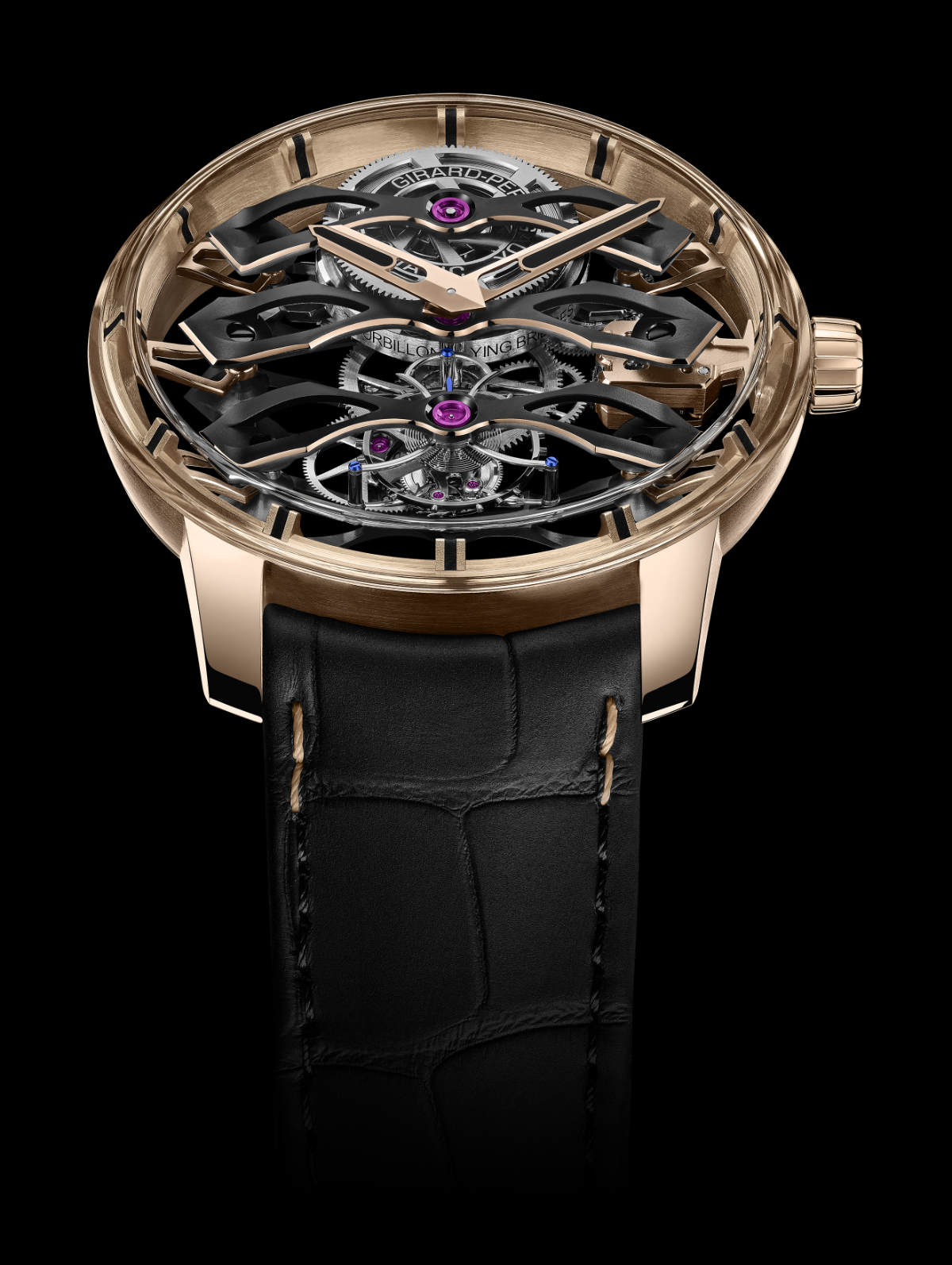 A notable characteristic of this timepiece is that it plays with three dimensional forms, positioning various dial elements at different heights, a characteristic shared in common with some of the world's finest architectural  structures. Despite its  complexity, the dial remains clean, uncluttered and simple to read, with the barrel, gear train and tourbillon arranged along a north-south axis. The barrel is positioned in the upper portion of the dial and sits above a white gold micro-rotor, harnessing energy from the motion of the wearer's wrist. The vertical sides of the rotor are engraved with the watch's model name, a subtle detail which perfectly demonstrates the Manufacture's obsession with the minutiae. 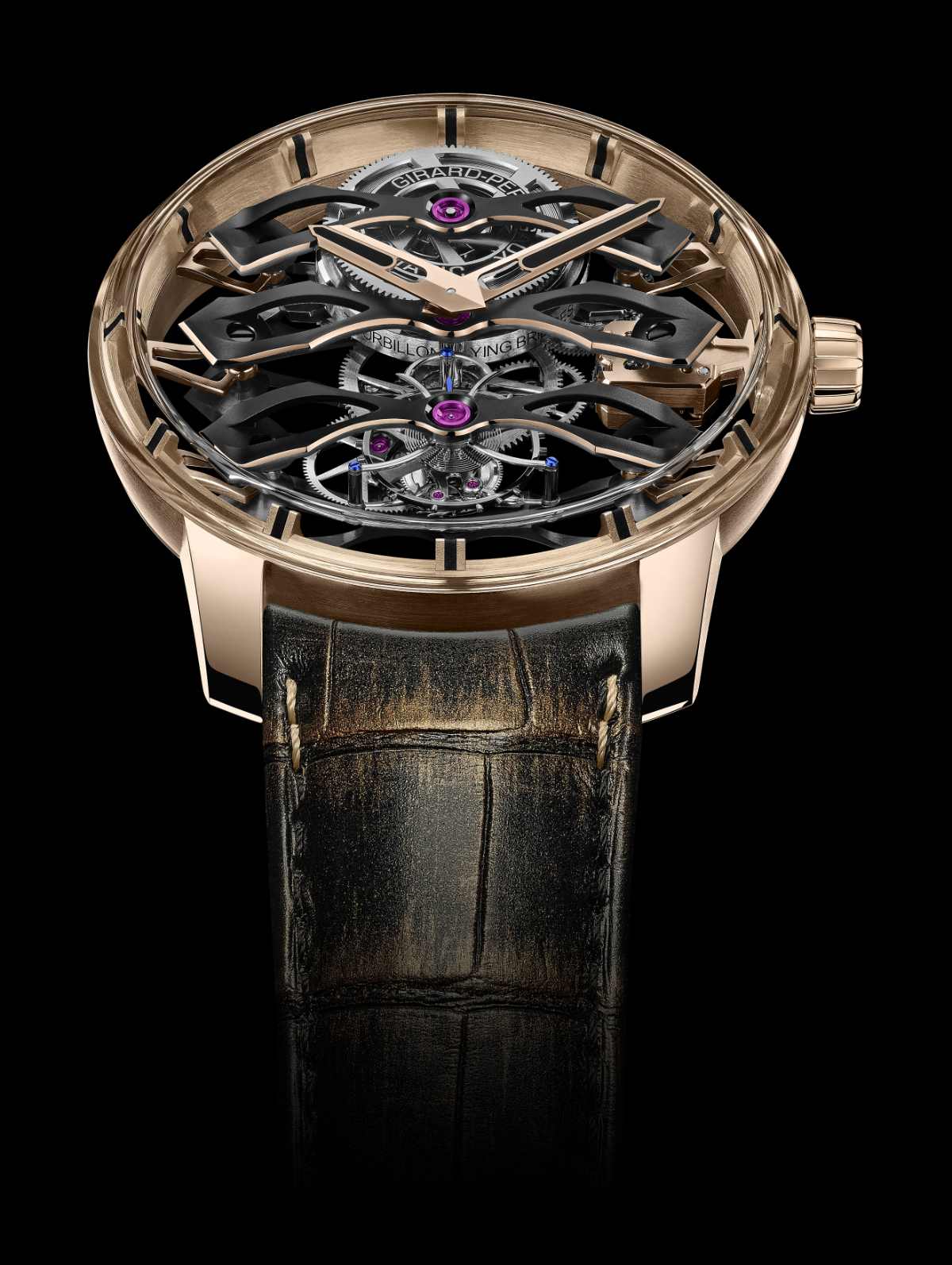 The tourbillon is positioned to the base of the dial. Its cage is lyre-shaped, a historical design dating back to the 19th century, albeit in this instance it is made of ultra-modern Grade 5 titanium. A blued hand on the cage rotates 360° every minute and serves as a small seconds display. The tourbillon cage is comprised of 79 components and weighs a mere 0.25 grams. This remarkably low mass mitigates energy consumption, thereby contributing to the movement's  impressive power-reserve  of 60 hours (minimum). 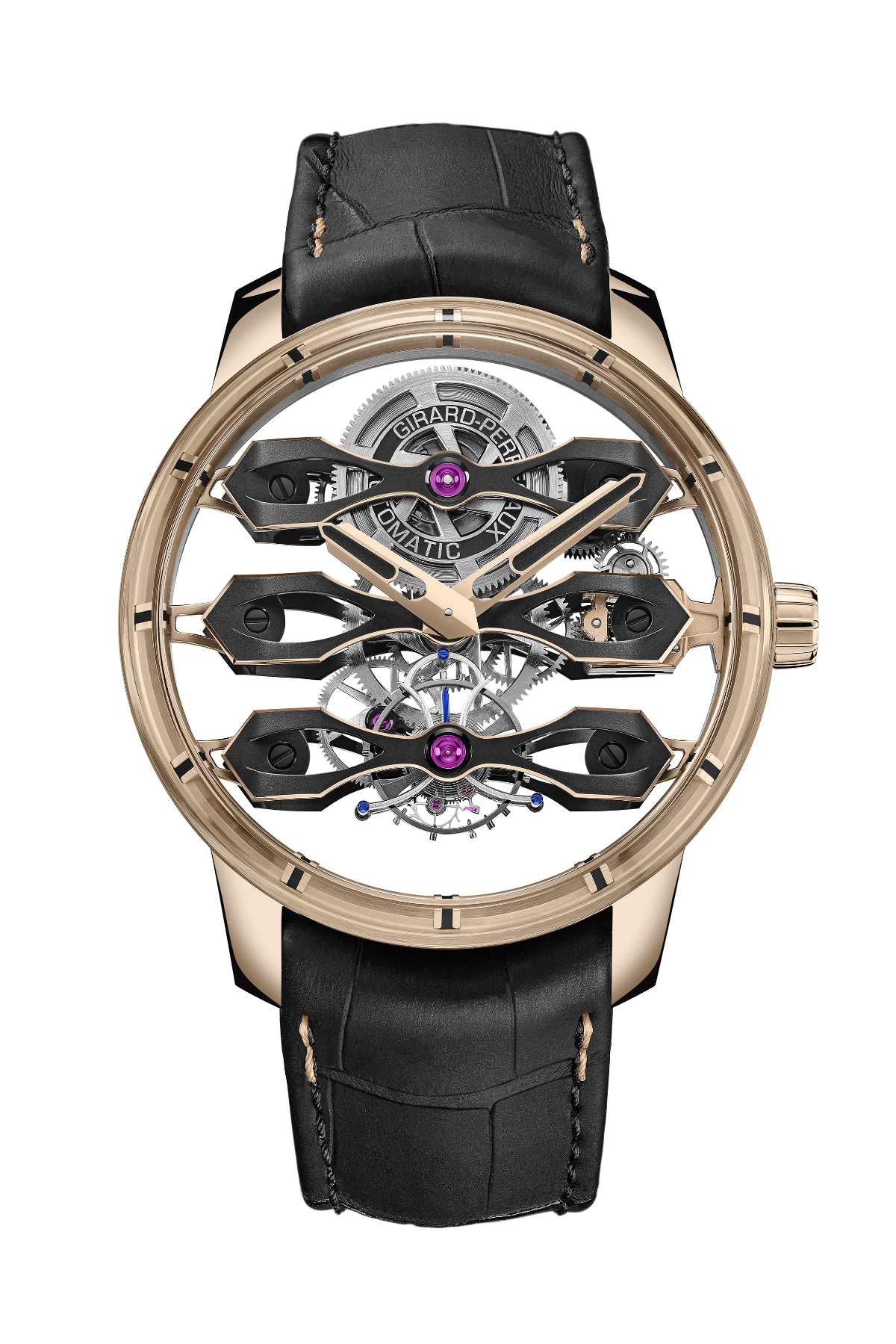 The sapphire crystal, positioned atop the dial, has gently sloping sides that curve downwards to the outer edge of the case middle, hence the model eschews a conventional bezel. To achieve this eye­ catching aesthetic, it takes between  four to  five times more material than a regular  sapphire  crystal. It also necessitates much expertise to polish the crystal box to a flawless conclusion. Surprisingly, having expended much effort making this upper  sapphire  crystal, the time-served  craftsperson  has to repeat the exercise and make a similar crystal box to shroud the underside of the watch head. By equipping the Tourbillon with Three Flying Bridges with upper and lower crystal box sapphire crystals, the Manufacture has imbued the model with a harmonious degree of symmetry.

The Tourbillon with Three Flying Bridges is available worldwide in all authorised Girard­ Perregaux retailers. 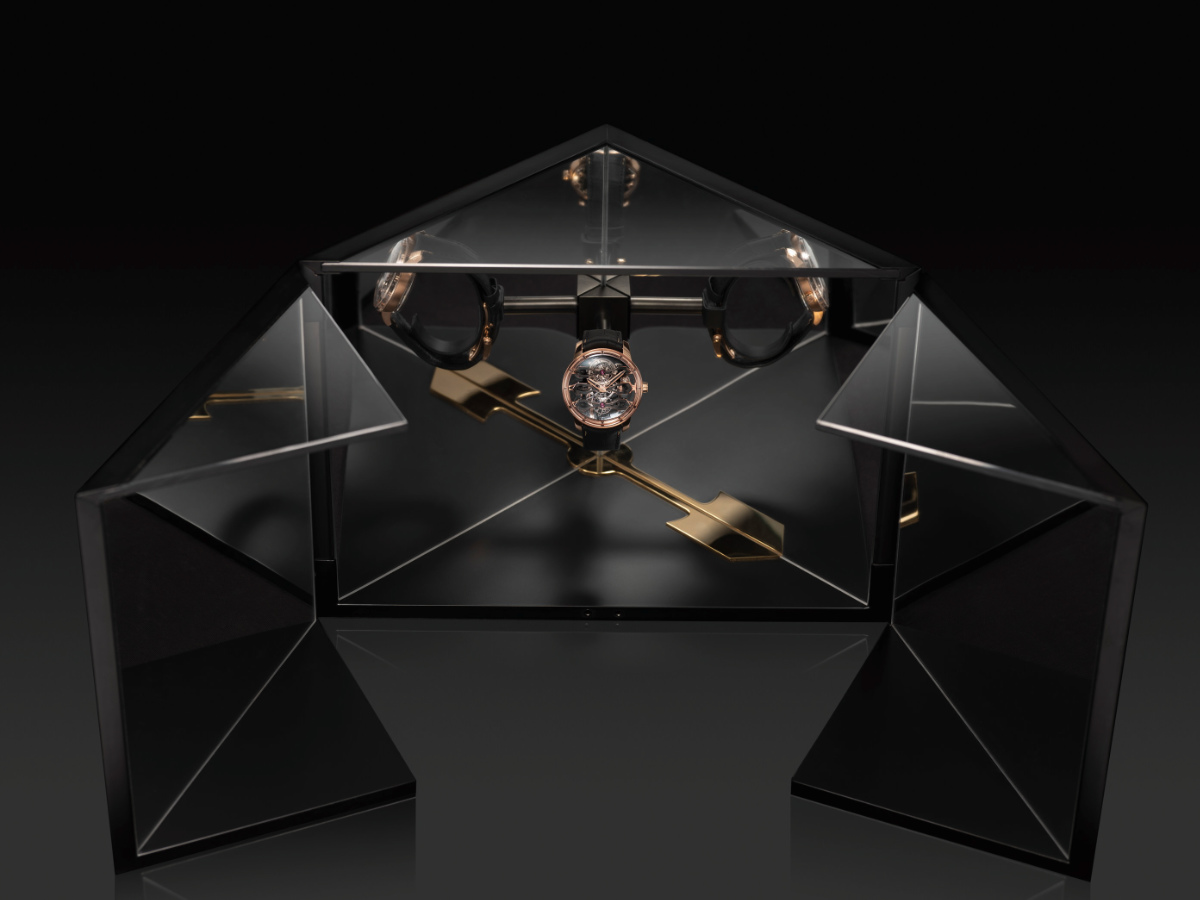 Founded in 1791, Girard-Perregaux is one of the oldest fine watchmaking manufactures still in operation and is appreciated by those in the know. This year the company celebrates its 230th anniversary, a fitting testament to the brand's watchmaking expertise. Indeed, the firm's history is dotted with exceptional creations that skilfully blend aesthetics and functionality. These models include the iconic Laureato, born in 1975, as well as the legendary Tourbillon 'With Three Gold Bridges,' a watch that made the invisible visible, transforming bridges from just a technical element to an integral part of the timepiece - a first in watchmaking. Girard-Perregaux's place at the vanguard of horological innovation is confirmed by over one hundred recorded patents together with numerous prizes and distinctions. It remains one of the few watchmakers to retain Manufacture status for over two centuries by mastering all the required horological skills in-house and making watches infused with a notable degree of authenticity. While Girard-Perregaux respects its heritage, it continues to look ahead, embracing new technologies, state of the art materials, and fresh takes on iconic shapes.

Girard-Perregaux is part of the Kering Group, a world leader in luxury apparel.