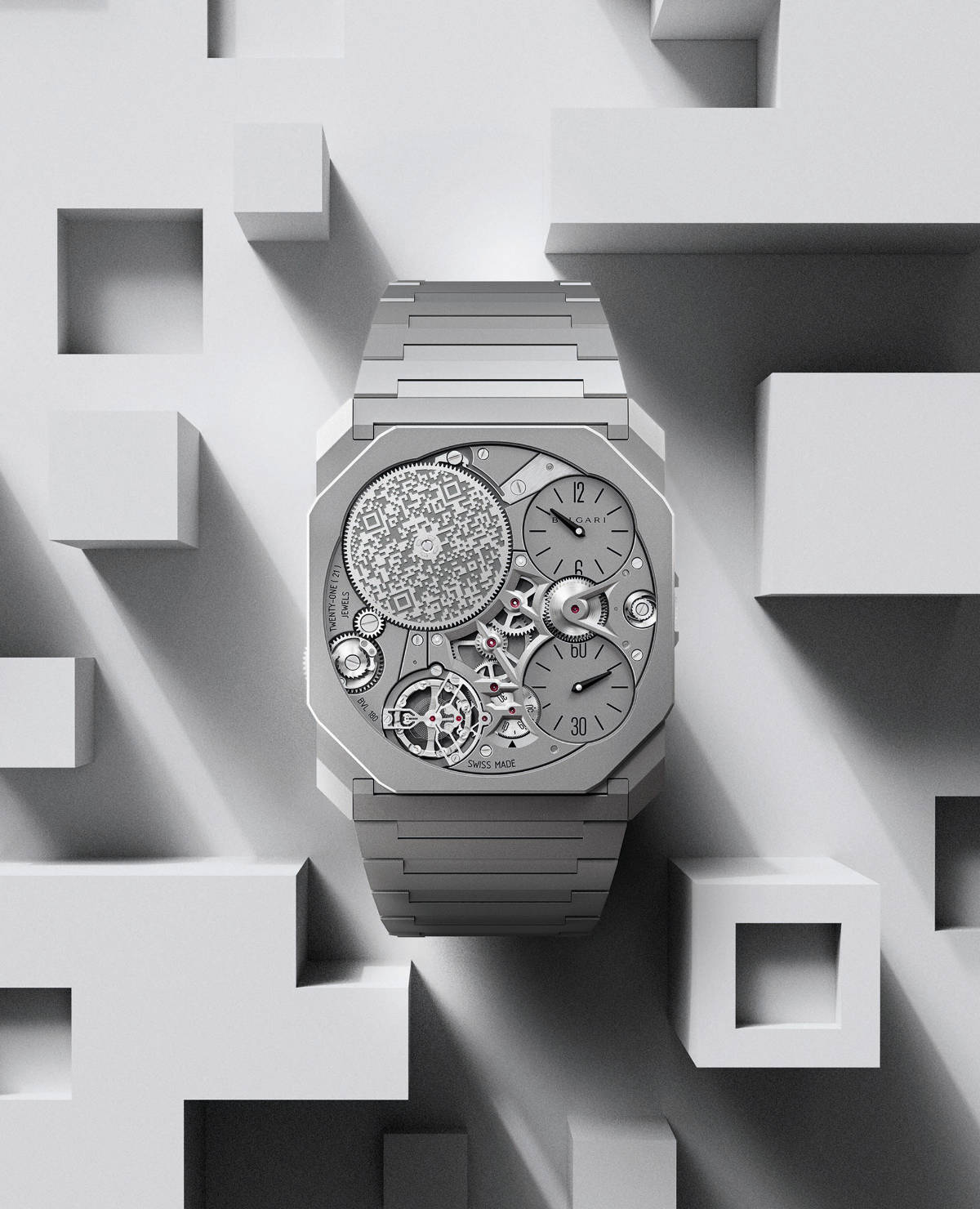 ABOVE AND BEYOND THE RECORD, A NEW DIMENSION

Octo Finissimo Ultra is far more than the world's thinnest mechanical watch. Over and above the record itself, it symbolises a mindset, an ability to innovate and to redefine the codes of Haute Horlogerie. It is also the ultimate stage in a unique adventure – as well as an opening onto a whole new dimension.

The measurement is astonishing: 1.80 mm thick! In other words, as thin as a 20 euro cent coin – and not for the movement alone, but for the watch as a whole, from the caseback to the top of the sapphire crystal. A thinness world record for a mechanical watch and the eighth for the Octo Finissimo collection. A significant new breakthrough for Bulgari in the world of contemporary Haute Horlogerie.

"Can we do it? No sooner was the question asked three years ago than our teams answered: how are we going to do it?" recalls Antoine Pin, Managing Director of the Bulgari Watch Division. “This ability to meet challenges is embedded in the brand's DNA. As for the word ‘ultra’, it expresses this desire to go beyond the limits, to play with extremes, an idea that we love in-house!”

An eighth world record that takes its place in a proud lineage. A classic example of what happens when the journey experience is as important as the destination. Without the expertise acquired by Bulgari over the years, the Octo Finissimo Ultra could never have been created. Better still, no one would have dared to attempt this insane feat. For it takes audacity and confidence to set off in pursuit of this ultimate ambition: to create the world's thinnest reliable and robust mechanical watch. 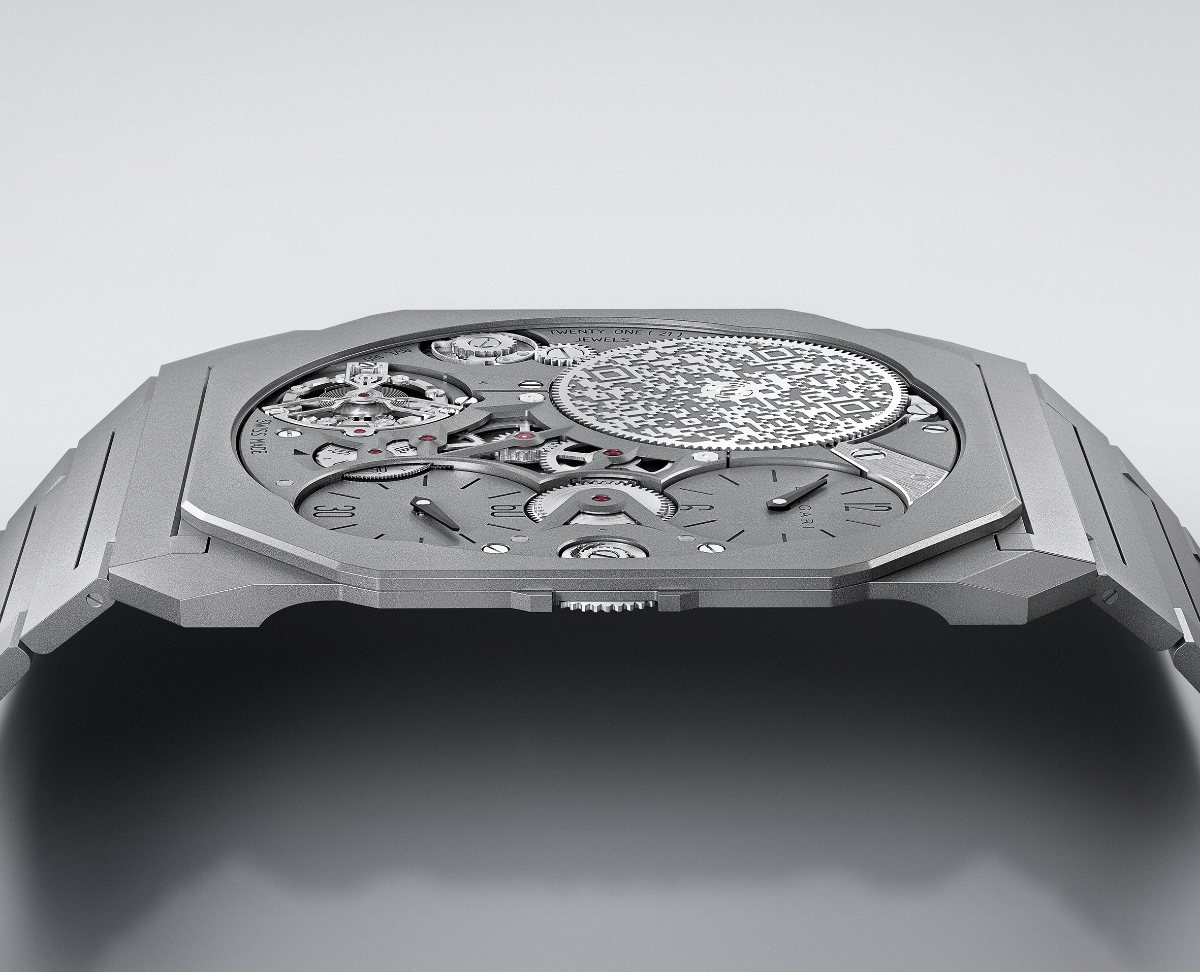 Although indispensable, the expertise acquired was not enough. The designers, engineers and watchmakers had to start from scratch when they realised the scale of the challenge. One does not create the finest mechanical watch in the world by relying solely on existing concepts. You have to envisage a complete paradigm shift, to forget everything and rebuild. This is what leads Fabrizio Buonamassa Stigliani, Bulgari’s Product Creation Executive Director, to state that "the challenge of this eighth record was the most difficult to overcome, since we had to break the rules not only in terms of movement design, but also of the case, the caseback, the bracelet and the folding clasp. To achieve this degree of thinness, you not only have to review your way of thinking, but you must also draw upon a wide range of skills, play with multiple materials and adapt to a multitude of new constraints. In this sense, the Octo Finissimo Ultra is unquestionably the ultimate complication in this vast field of possibilities represented by ultra-miniaturisation."

The Octo Finissimo Ultra also retains all the codes of the collection, starting with the purity and elegance of its design – an additional constraint that the R&D teams working on this project set themselves. This premise notably involved the monochrome style signature of sandblasted titanium, a 40 mm octagonal case – although a larger size would have simplified matters – and an integrated bracelet as thin as the watch. As for the seconds display on the wheel at 6 o'clock, it is once again off-centred – another collection signature – in relation to the indication of the hours and minutes on two regulator-type counters.

This world-record thinness also plays on the perception of the visible and the invisible: the Octo Finissimo Ultra appears to be both a two-dimensional and a three-dimensional object. From the front, the timepiece reveals volumes and invites an immersion in the depth of the mechanism, while the components come to life on various levels and offer a truly three-dimensional vision. Viewed in profile, the watch that is as barely visible as a sheet of paper magically becomes a two-dimensional object. Finally, when worn, the Octo Finissimo Ultra triggers a physical sensation that is doubtless unequalled.

With its QR code engraved on the barrel’s ratchet wheel, the Octo Finissimo Ultra opens up new horizons in contemporary Haute Horlogerie. Once scanned, this individual key invites you into a new dimension, connected to a unique timeless experience. Each of the ten first Octo Finissimo Ultra timepieces will be delivered with an exclusive NFT artwork which, thanks to blockchain technology, guarantees the authenticity and uniqueness of the watch. It also gives each owner exclusive access to a digital universe dedicated to their own watch. In this sense, the Octo Finissimo Ultra represents the transition from ultra-miniaturisation to immateriality. 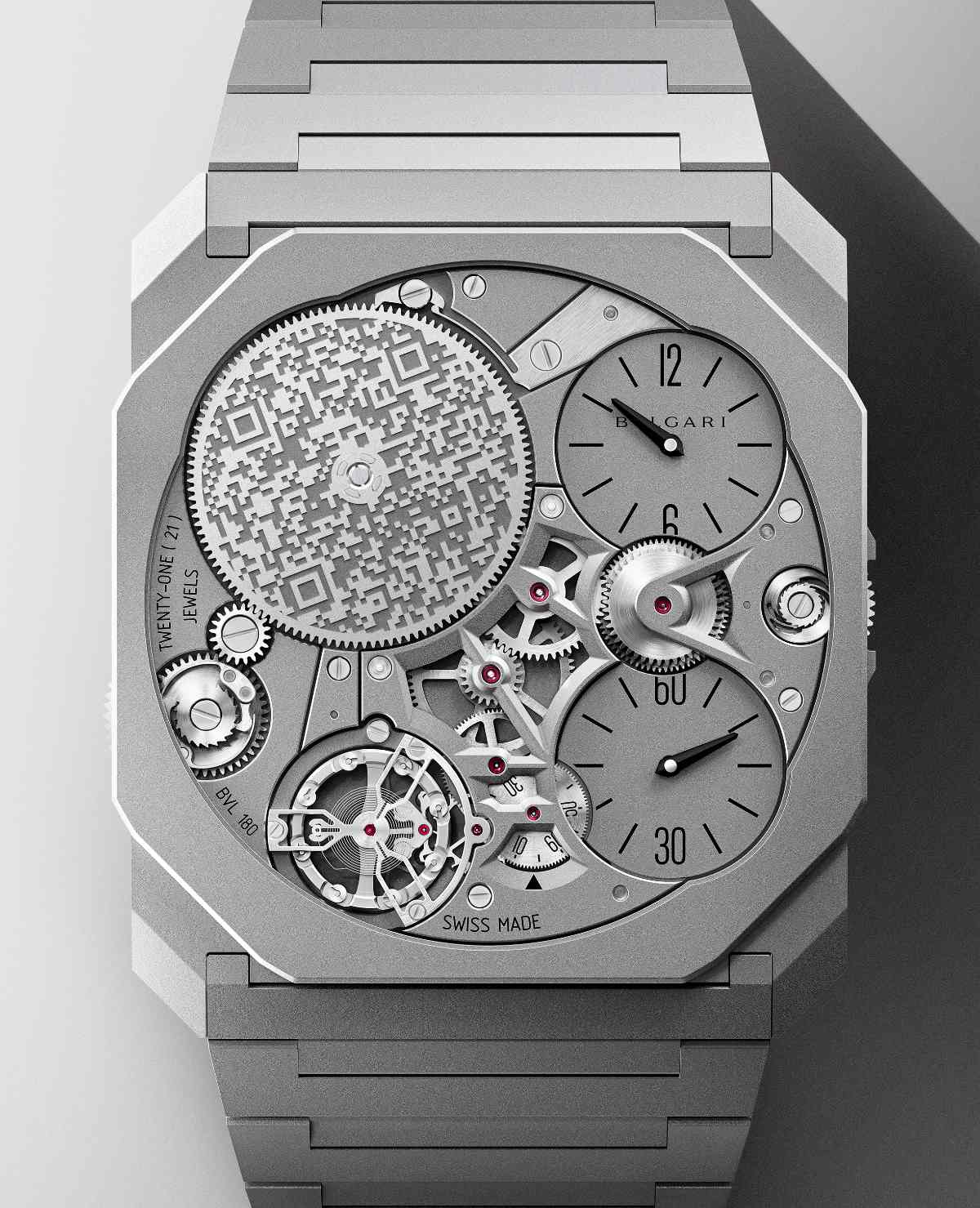 The Octo Finissimo Ultra is a challenge to the laws of physics. To achieve this degree of thinness, you have to start from scratch, reinvent everything and find innovative solutions. Eight patent applications have been filed.

Three years of research and development were required for several technical teams involved in this adventure at Bulgari in the Vallée de Joux and Neuchâtel; as well as avant-garde movement development specialist Concepto in La Chaux-de-Fonds. The Octo FinissimoUltra thereby stems from multiple skills pooled to meet a major challenge: to overcome all the difficulties – of which there were many – in order to create the world’s thinnest mechanical watch. Whatever happens, the result will remain a landmark in the history of contemporary Haute Horlogerie.

Like a sprinter for whom each hundredth of a second gained represents exponential efforts, the quest for a new record is always a matter of surpassing oneself (on this topic, have a listen to the B*Maestro "What it takes to break a record?" podcasts available on all platforms). In the same spirit, reducing the thickness of a watch by one or two extra millimetres requires the use of extremely ingenious solutions. That is why the construction of the Octo Finissimo Ultra uses the caseback as a mainplate on which the 170 components of the BVL Calibre 180 are integrated. The volume of the bracelet links also had to be totally rethought since, at 1.80 mm thick, they fit perfectly into the continuity of the thinness of the case, yet are twice as thin as an ordinary Octo Finissimo bracelet. In addition, the folding clasp had to be designed according to new parameters. Another issue for a watch measuring 40 mm in diameter and only 1.80 mm thick was the overall rigidity required, which was achieved by developing the case middle, bezel and titanium lugs as well as the caseback/mainplate element in tungsten carbide, a particularly dense, hard and ultra-resistant combination of carbon and tungsten. Moreover, in order to take advantage of the entire surface of the watch, the hours and minutes dials, the large barrel – which stores 50 hours of power reserve – as well as the escapement made light of the circular geometry of the bezel opening by doing things a little differently. 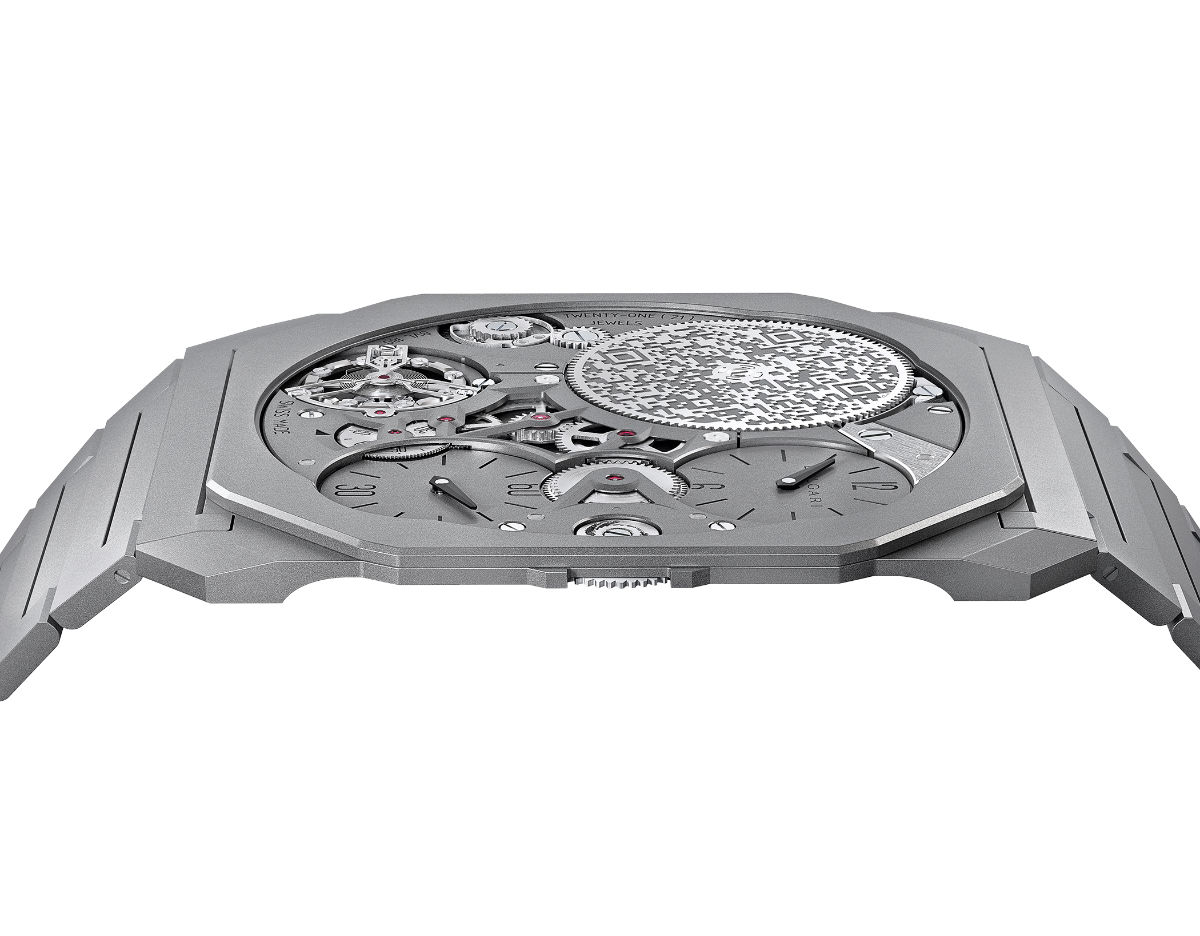 The laws of physics cannot be ignored, so they had to be taken into account while venturing way off the beaten track to find a way of housing all the components of a mechanical watch within a mere 1.80 mm thickness. At this level of thinness, and when all the components of an ordinary watch are indispensable, one has to rethink not only components’ design and production – to restricted tolerances – but also their functions. And ideally, whereas a component serves a single function in an ordinary watch, some of them need to serve up to four functions in an ultra-miniaturised watch. Such is the case with the dial, which, in addition to displaying time indications, also serves to hold other components in place. Another example of a problem to be solved was the crown for winding and setting the watch. If it had to fit on a 1.80 mm thickness, a classic vertical crown would be much too small and impossible to handle properly. The solution adopted was to use two horizontally placed knobs – one for winding and the other for setting – which enable easy handling when the watch is on the wrist. Driven by this same determination to achieve unprecedented thinness, all the watch functions were built in the same horizontal plane. Another ingenious innovation lies in a differential gear mechanism serving to handle time-setting without disturbing the gear train. A total of eight patent applications have been filed. They relate to the watch glass assembly, barrel structure, oscillator module, differential display, modular structure, bracelet, bimetal case middle-mainplate/caseback, as well as the Bvlgari Singvlarity technology. 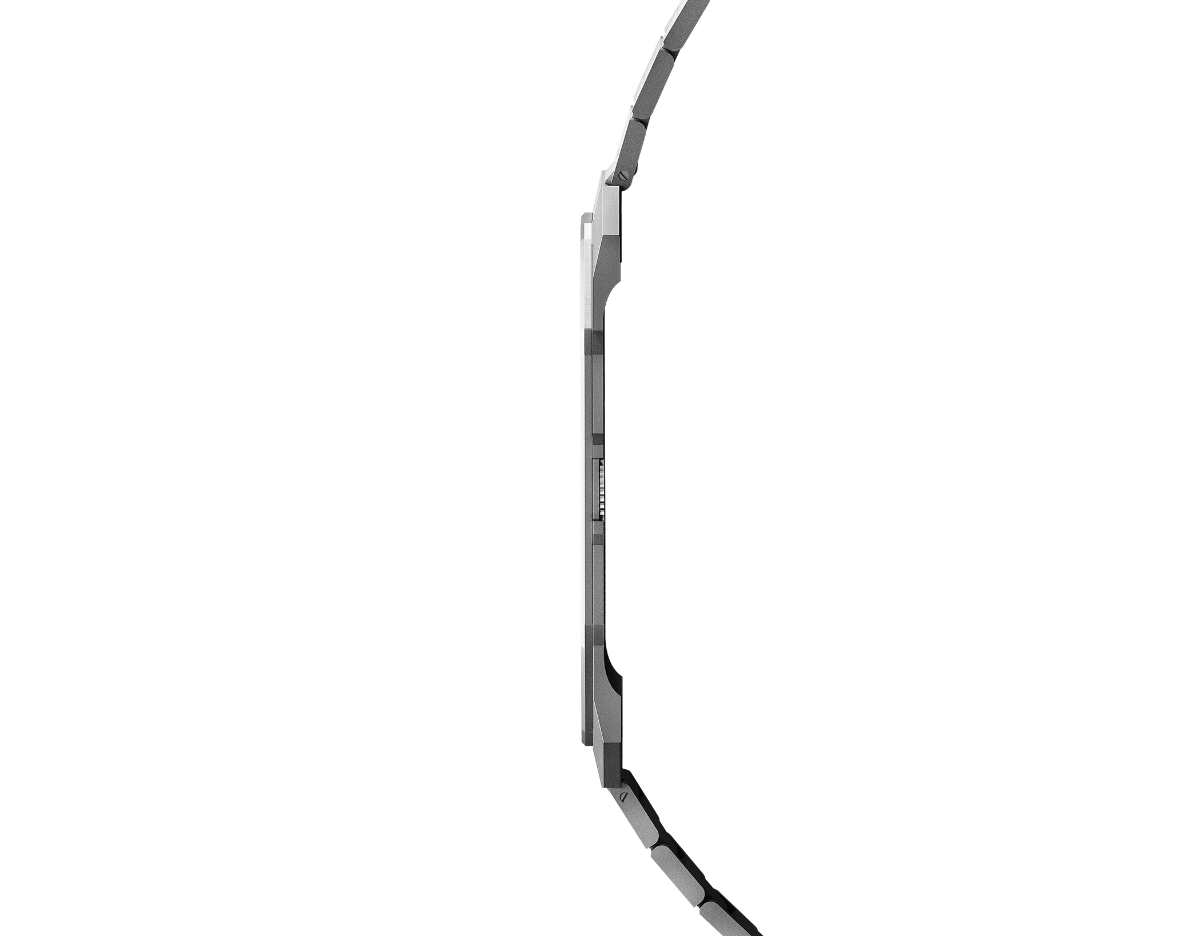 The Octo Finissimo Ultra is a bridge between the real and virtual worlds, between past and future. An exclusively mechanical watch connected to a new dimension.

The Octo Finissimo Ultra is more than a watch to be worn on the wrist; it is a global ecosystem that opens up new worlds. Its mechanics defy the laws of physics and extend into a non-physical world. The QR code engraved on the barrel’s ratchet-wheel is a gateway to a discovery journey in which each owner will find a world dedicated to their watch, its design and its history. This exclusive space will notably feature interviews, making-of segments, a virtual 3D tour of the movement, and an exploration of the visible/invisible concept linked to the watch.

Each of the ten owners of the Octo Finissimo Ultra will receive an exclusive NFT artwork guaranteeing the authenticity of the watch and the link to its owner. The world's thinnest watch thus becomes the vault of its unique work of art, an everlasting bond guaranteed by the Bvlgari Singvlarity tech, the eighth patent of this creation. So as to maintain the surprise effect that is often part of the world of NFTs, this entire digital ecosystem will be unveiled when the first Octo Finissimo Ultra hits the market in a few months’ time.

A resounding success in the physical world, the Octo Finissimo Ultra and its distillation of mechanical ingenuity invites the best of watchmaking into the digital world, that of NFTs and blockchain. 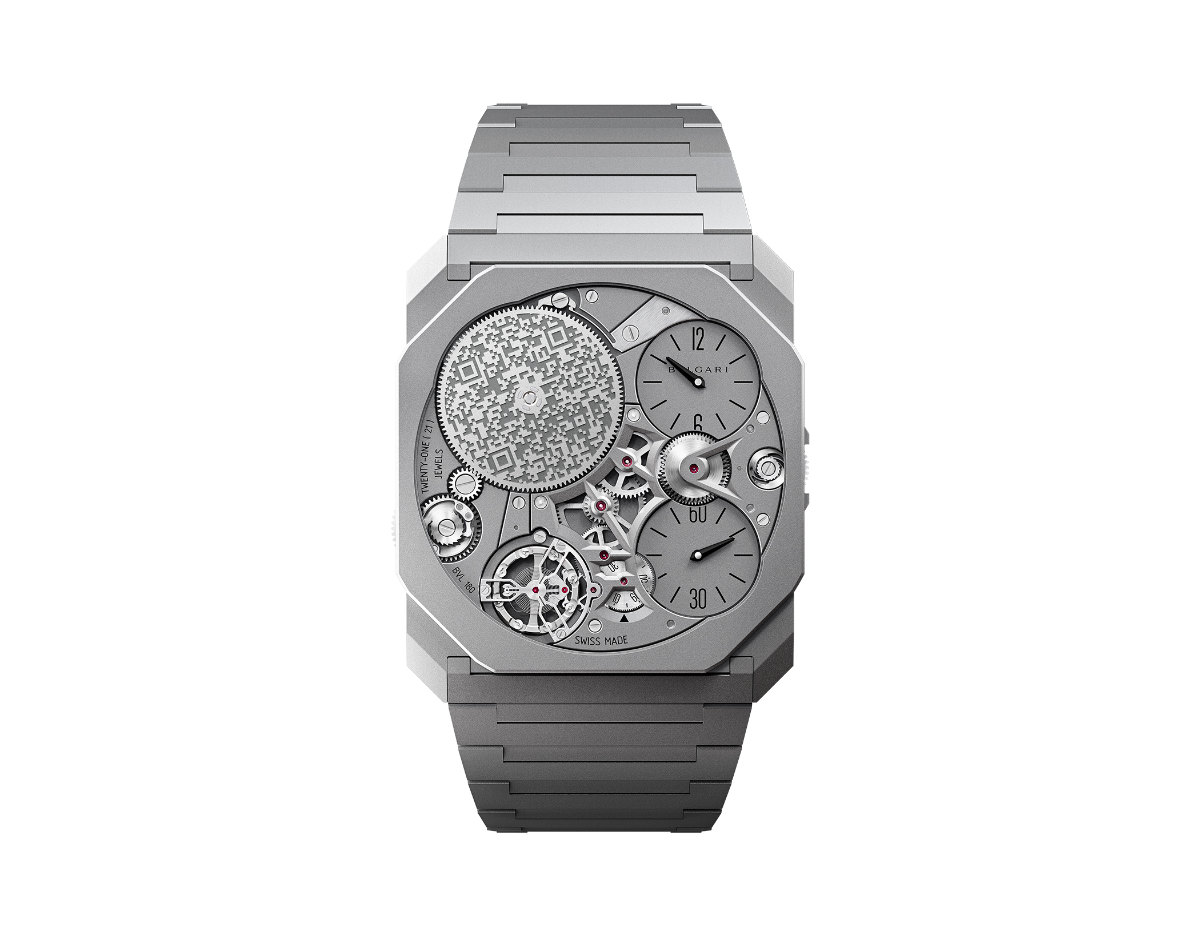 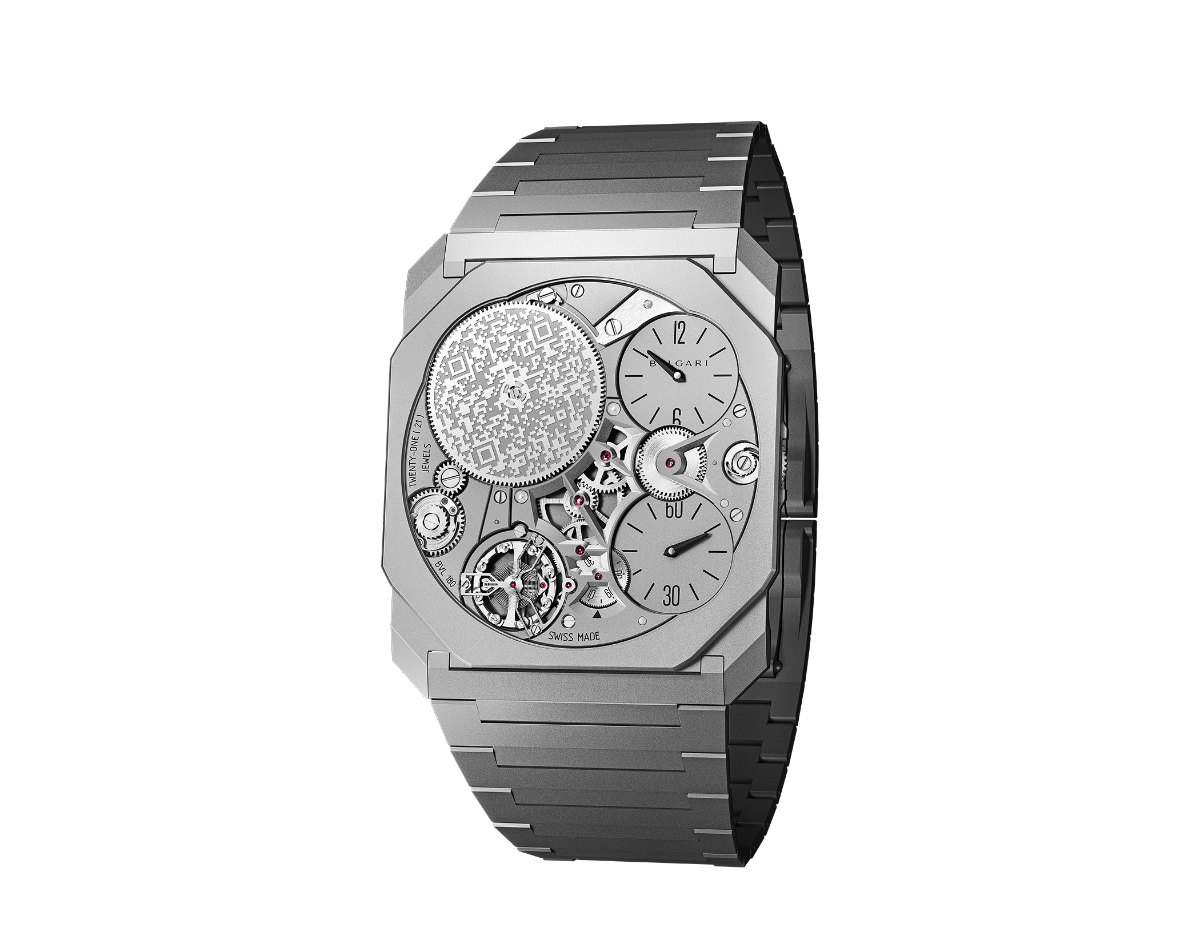