Discover new colours of La Esmeralda Tourbillon that can be manufactured for a maximum of eighteen pieces per colour. 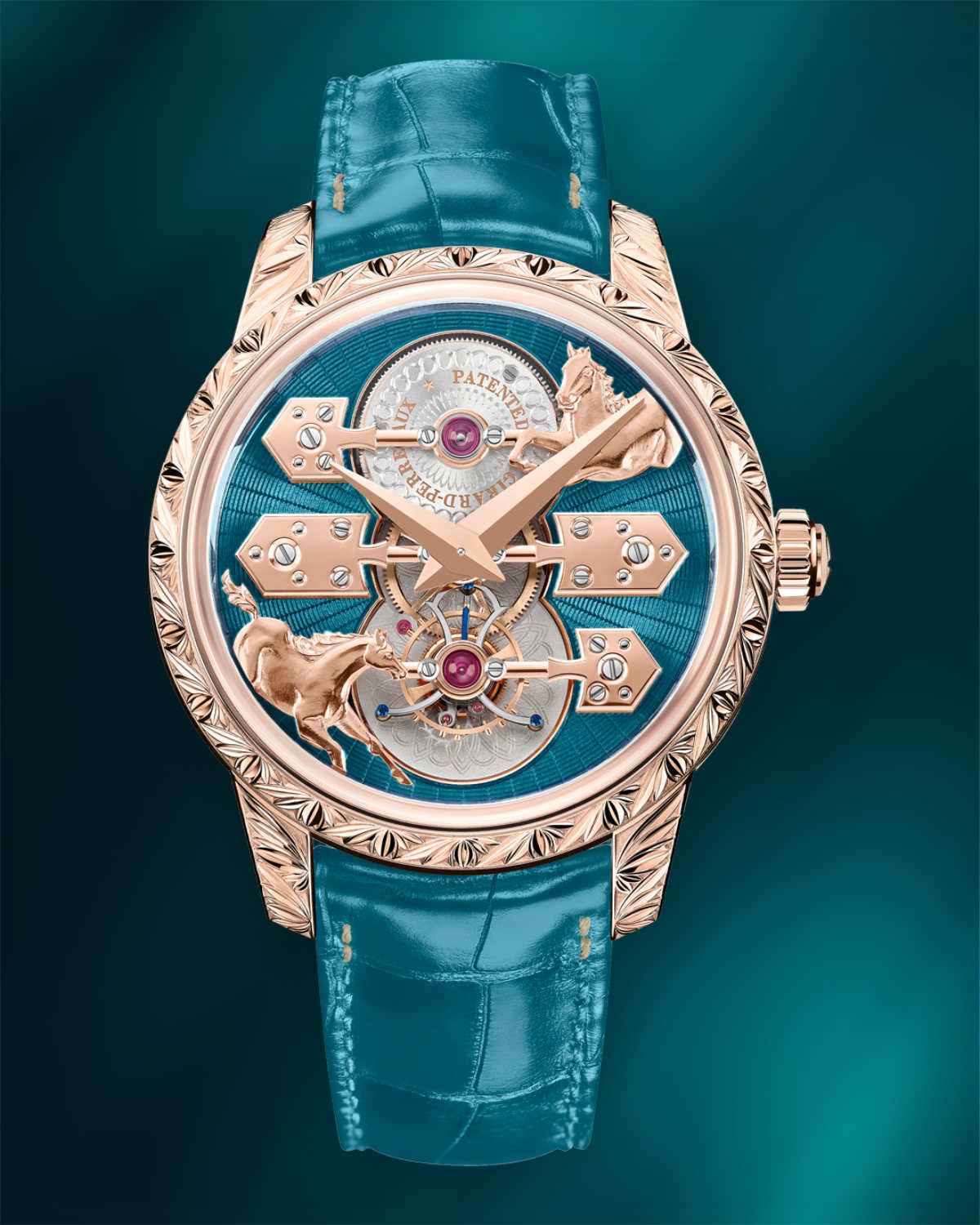 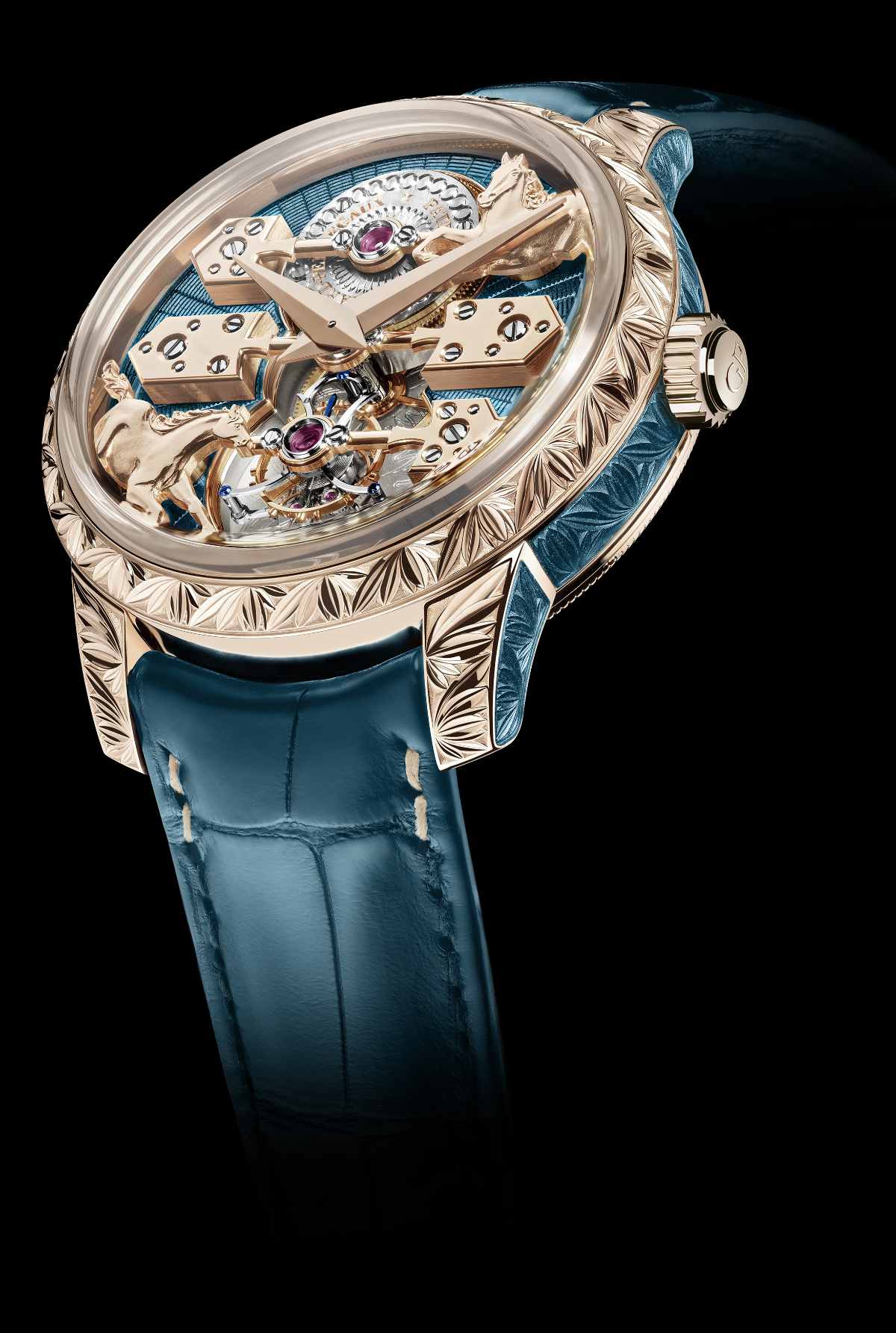 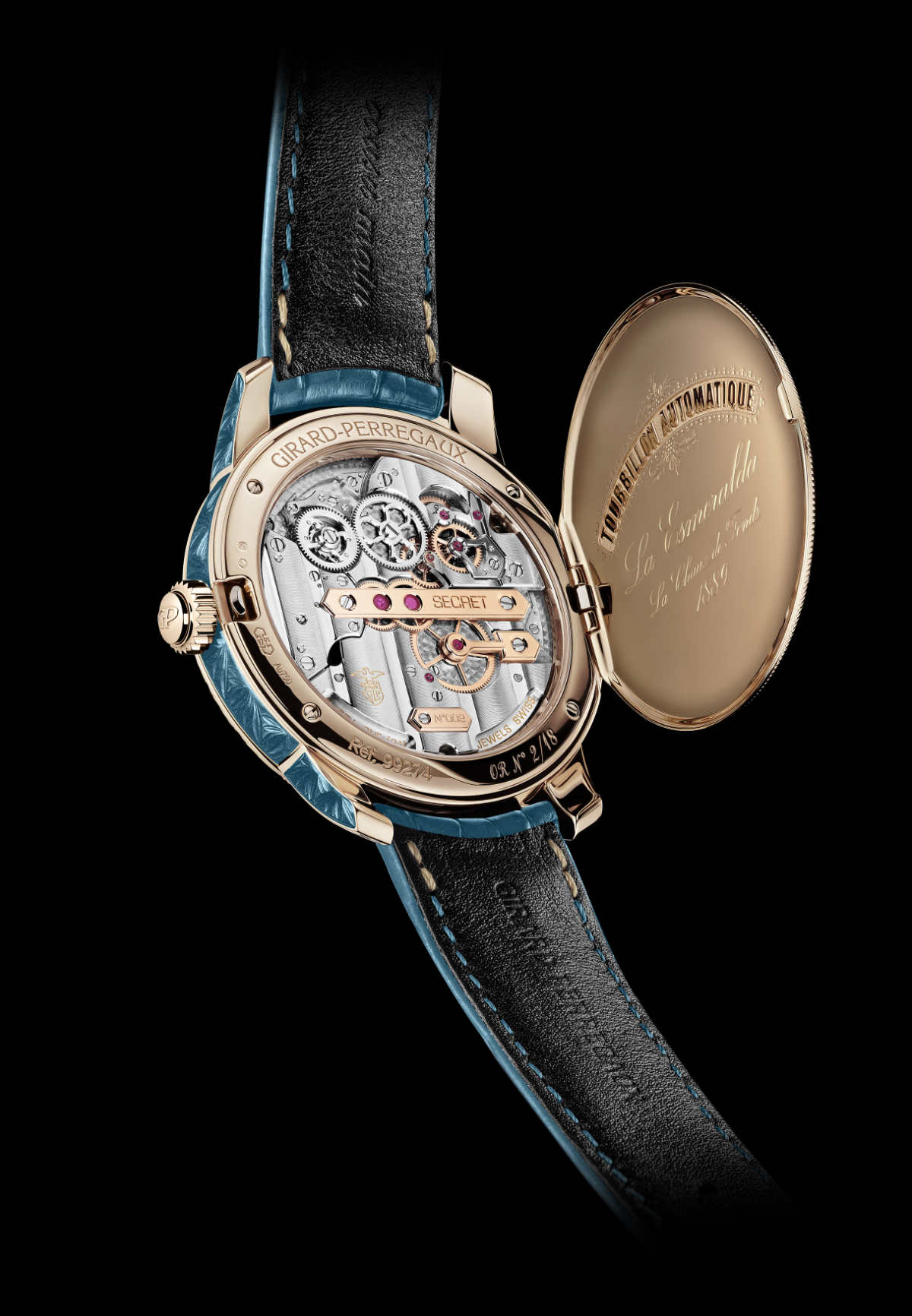 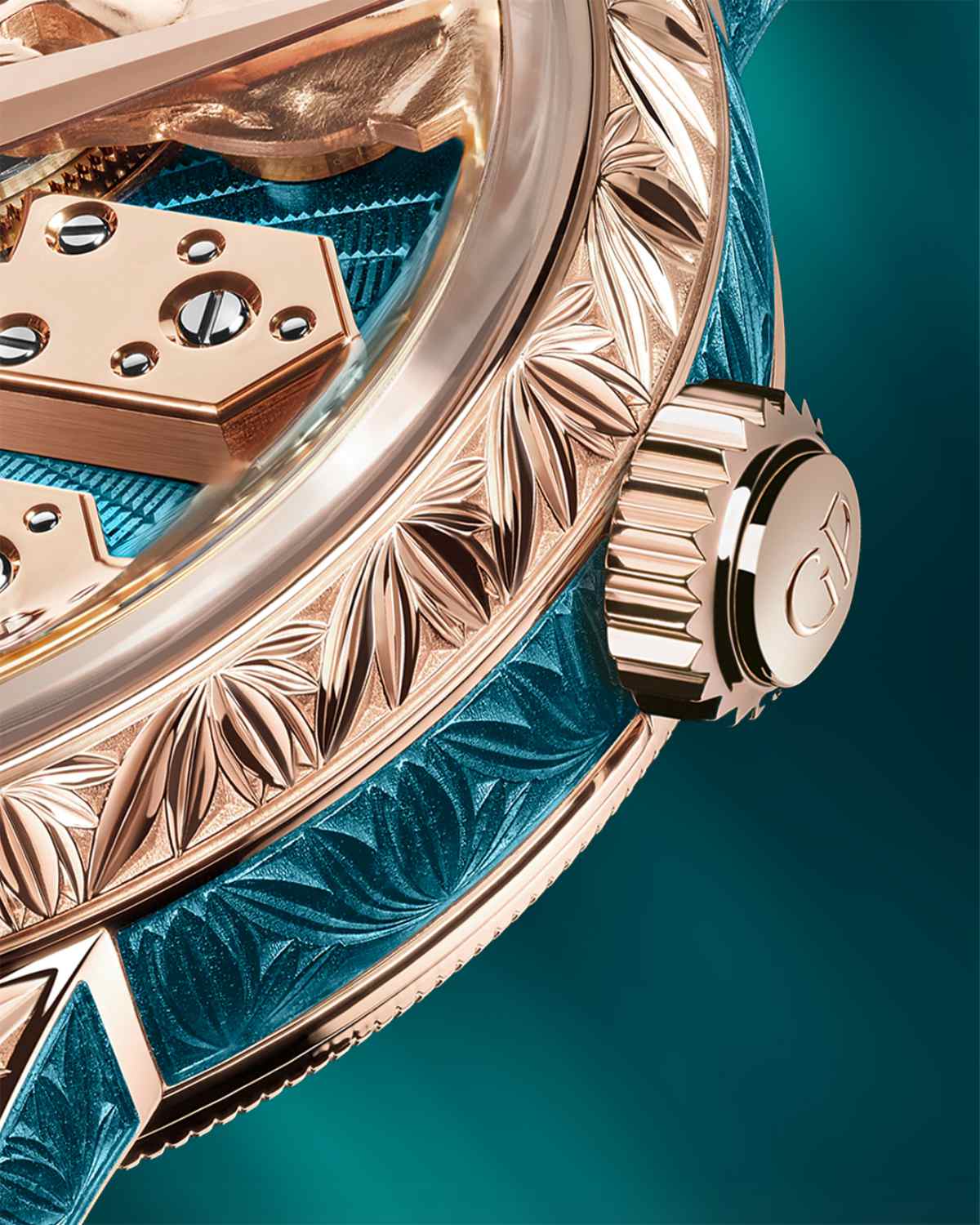 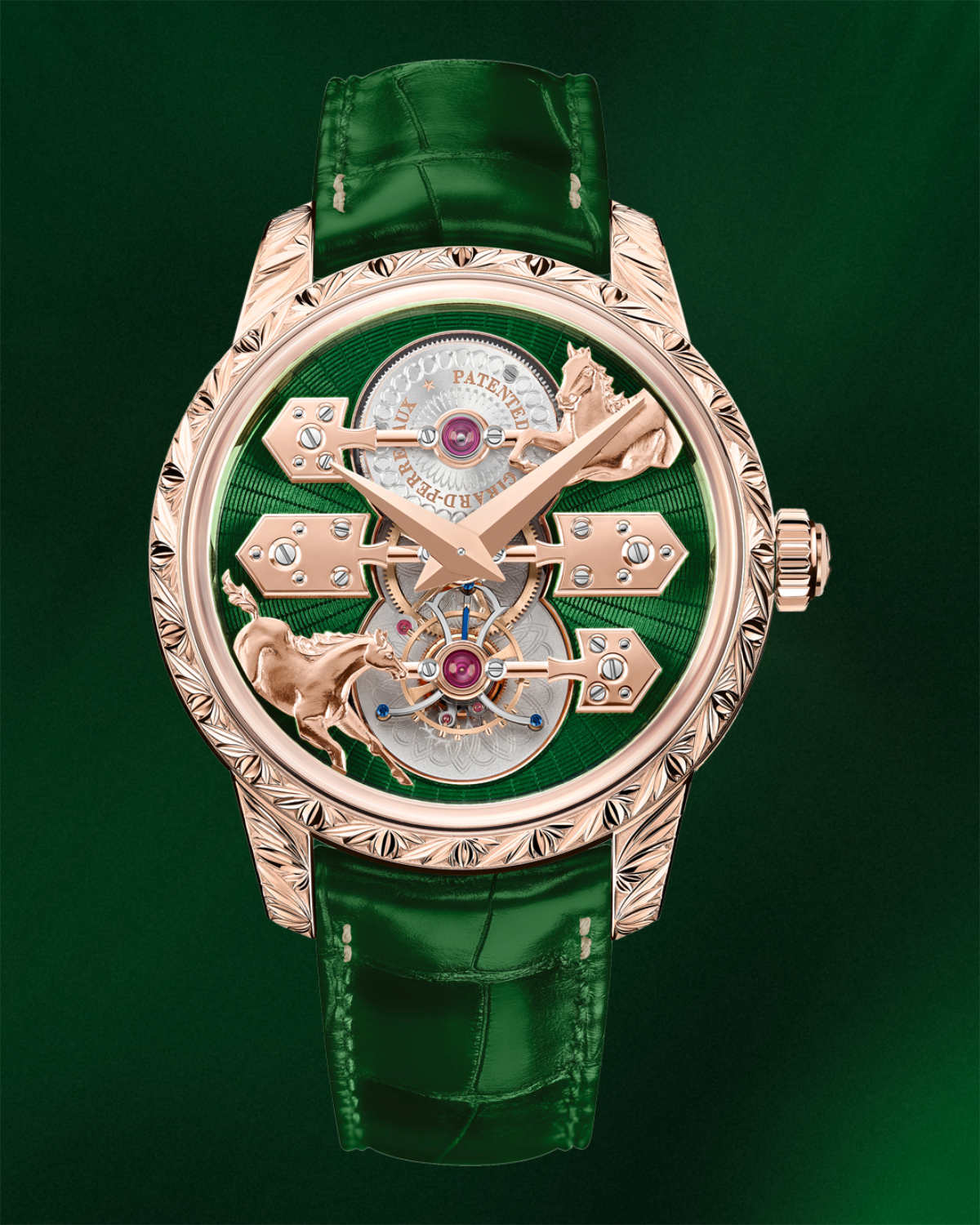 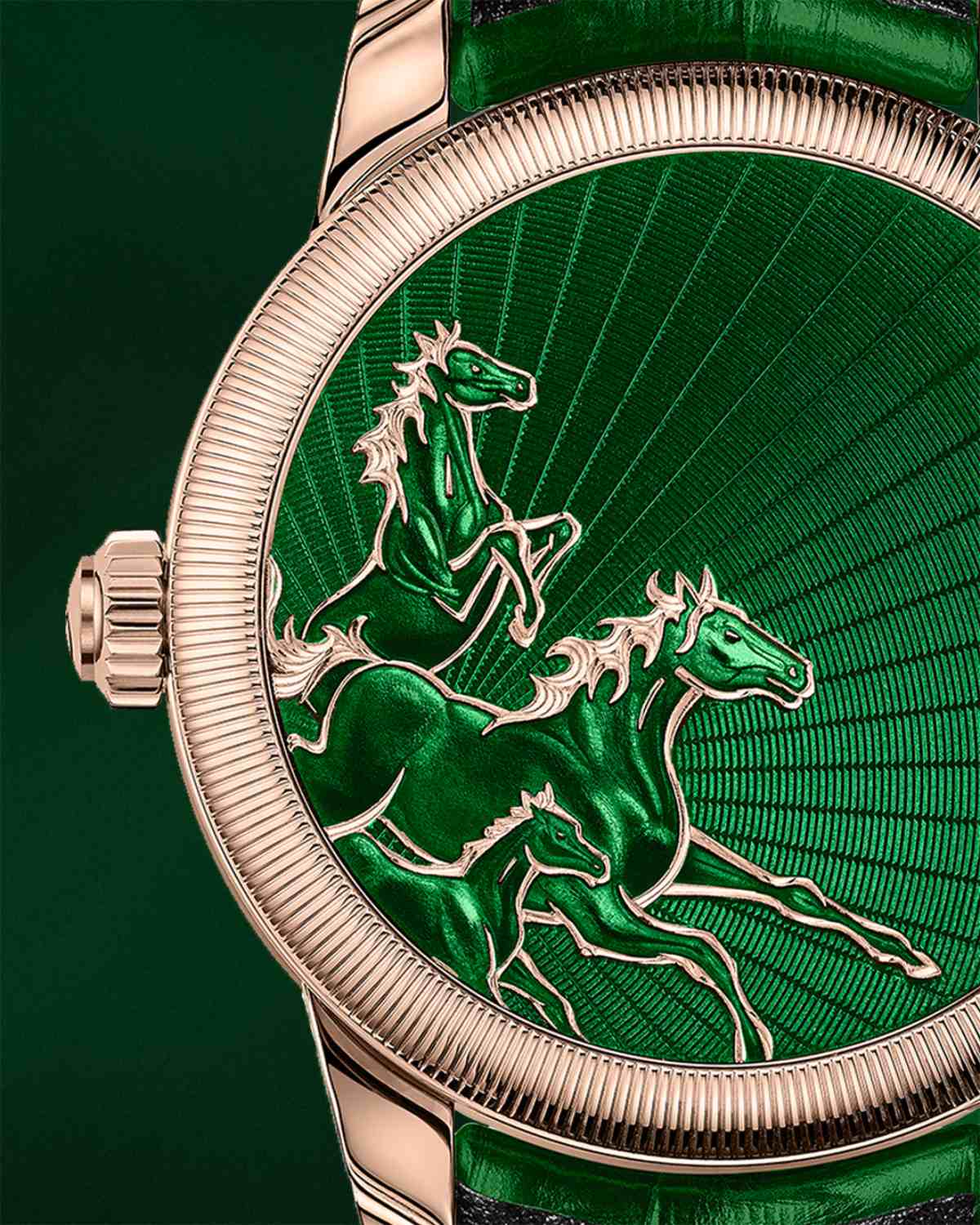 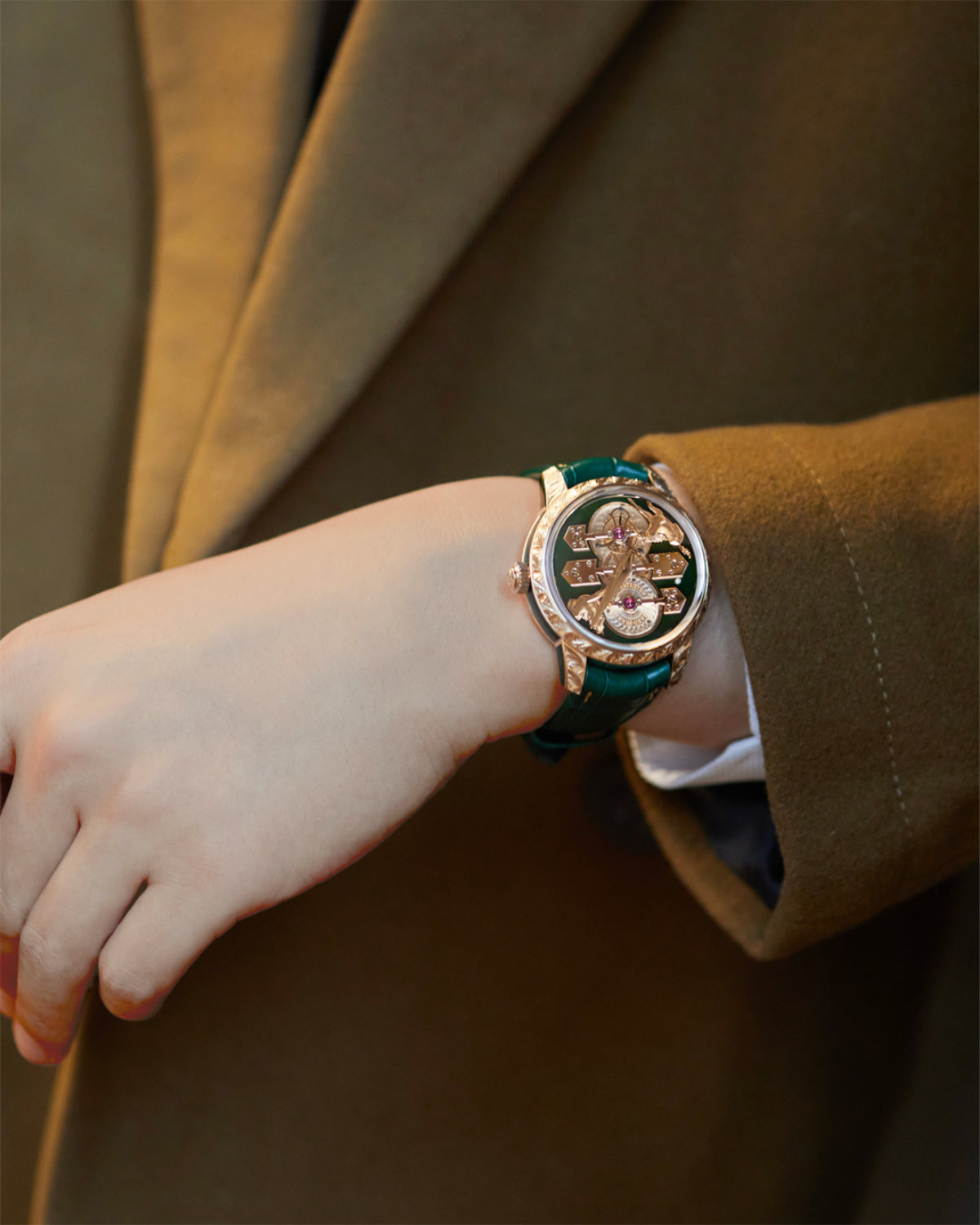 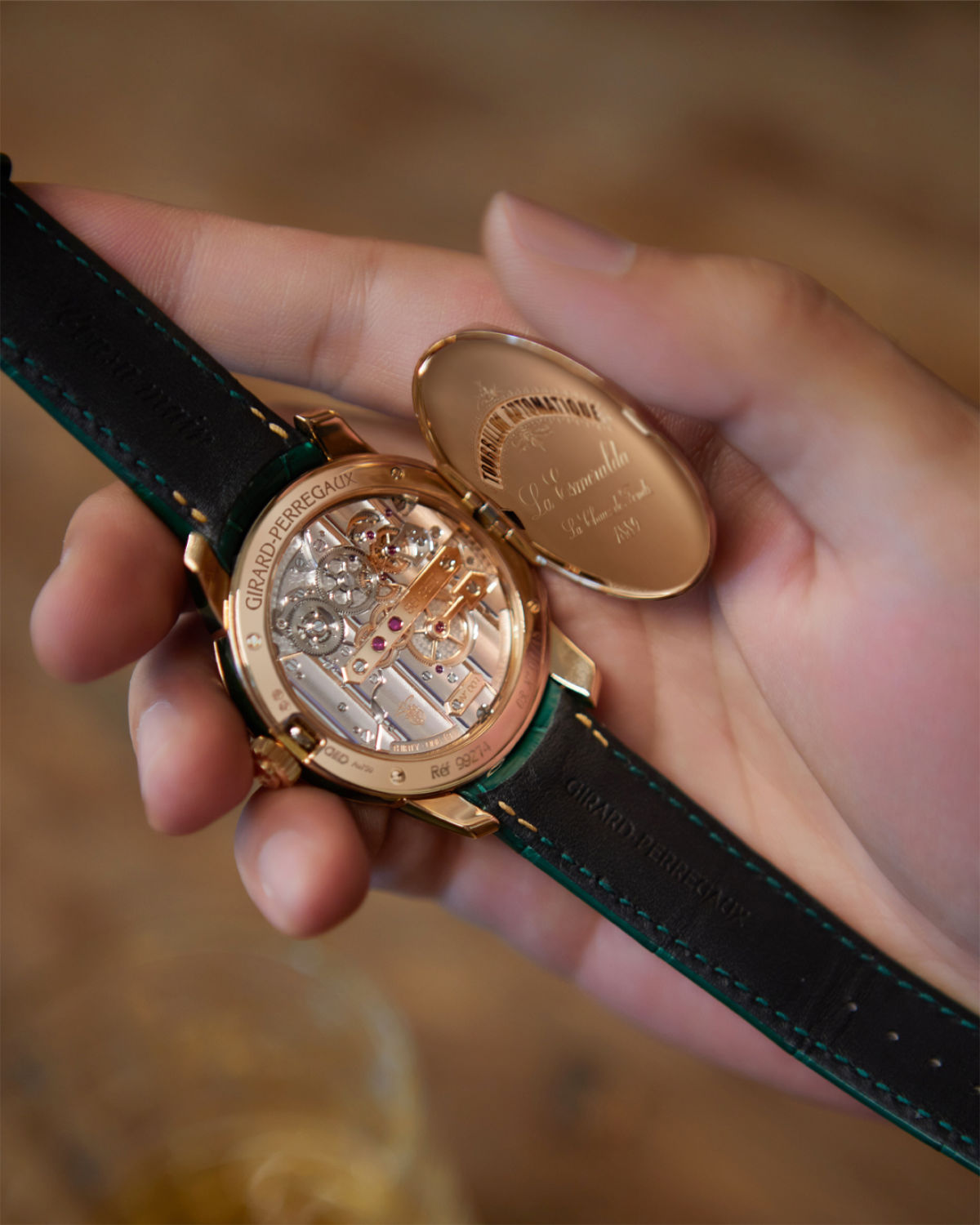 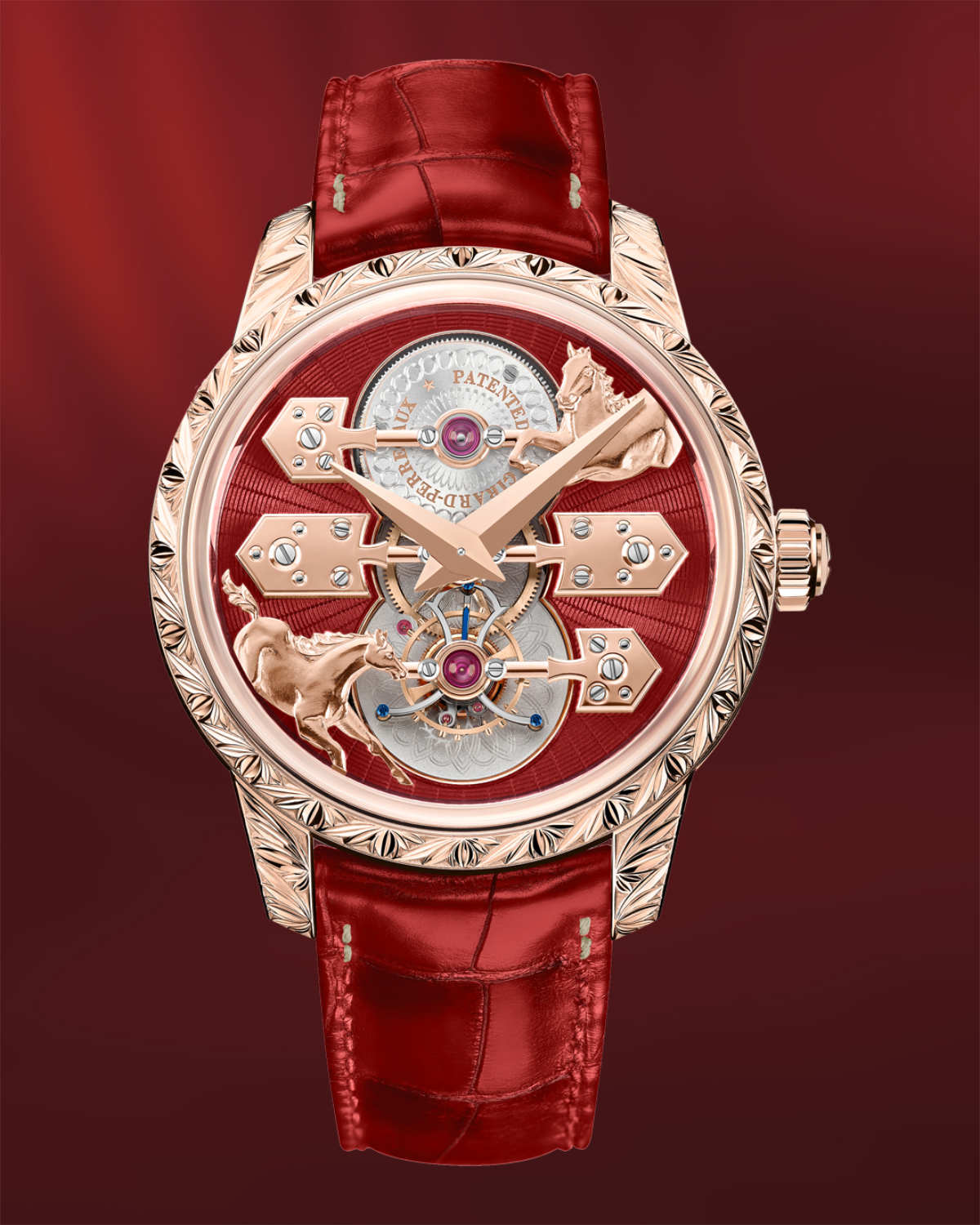 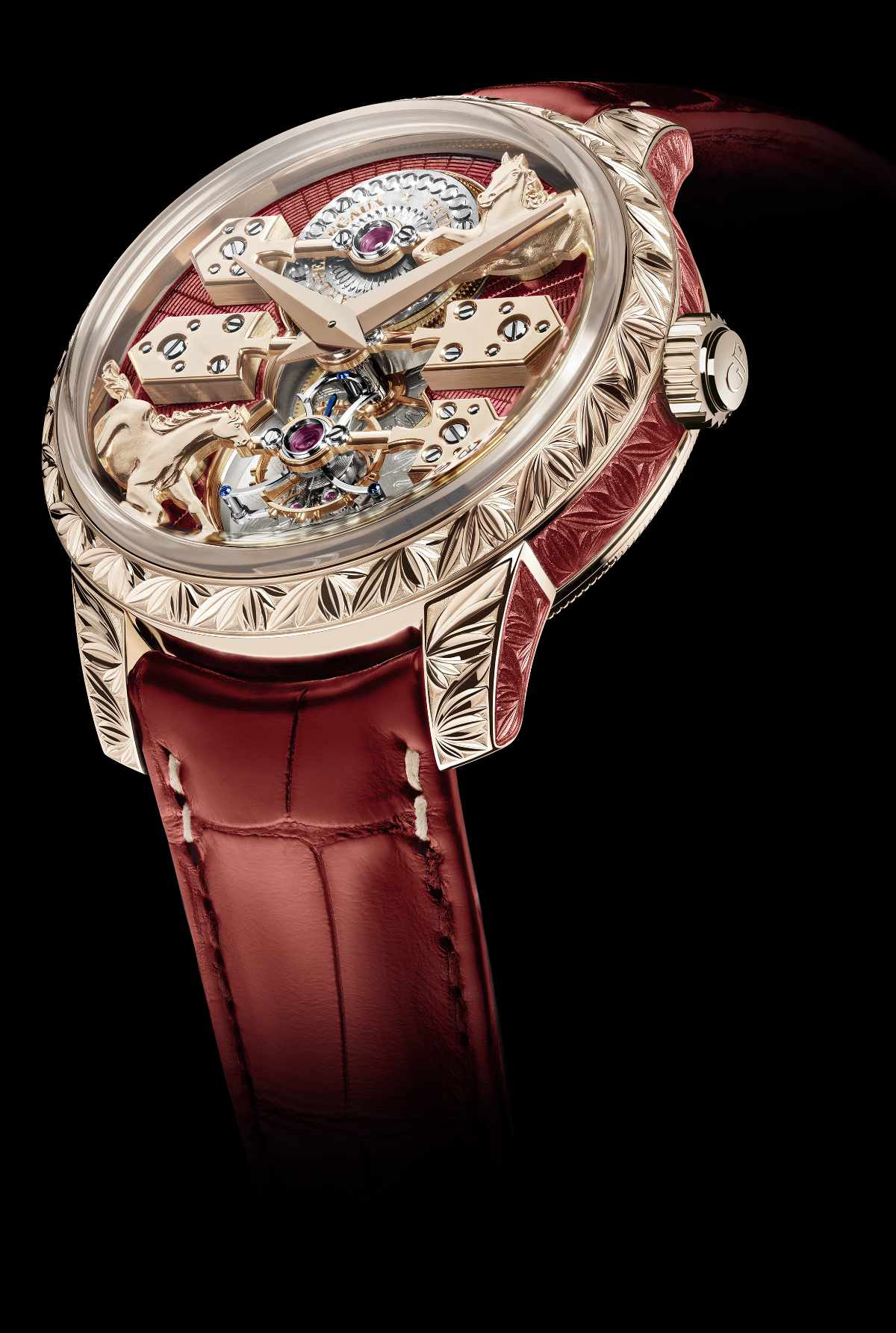 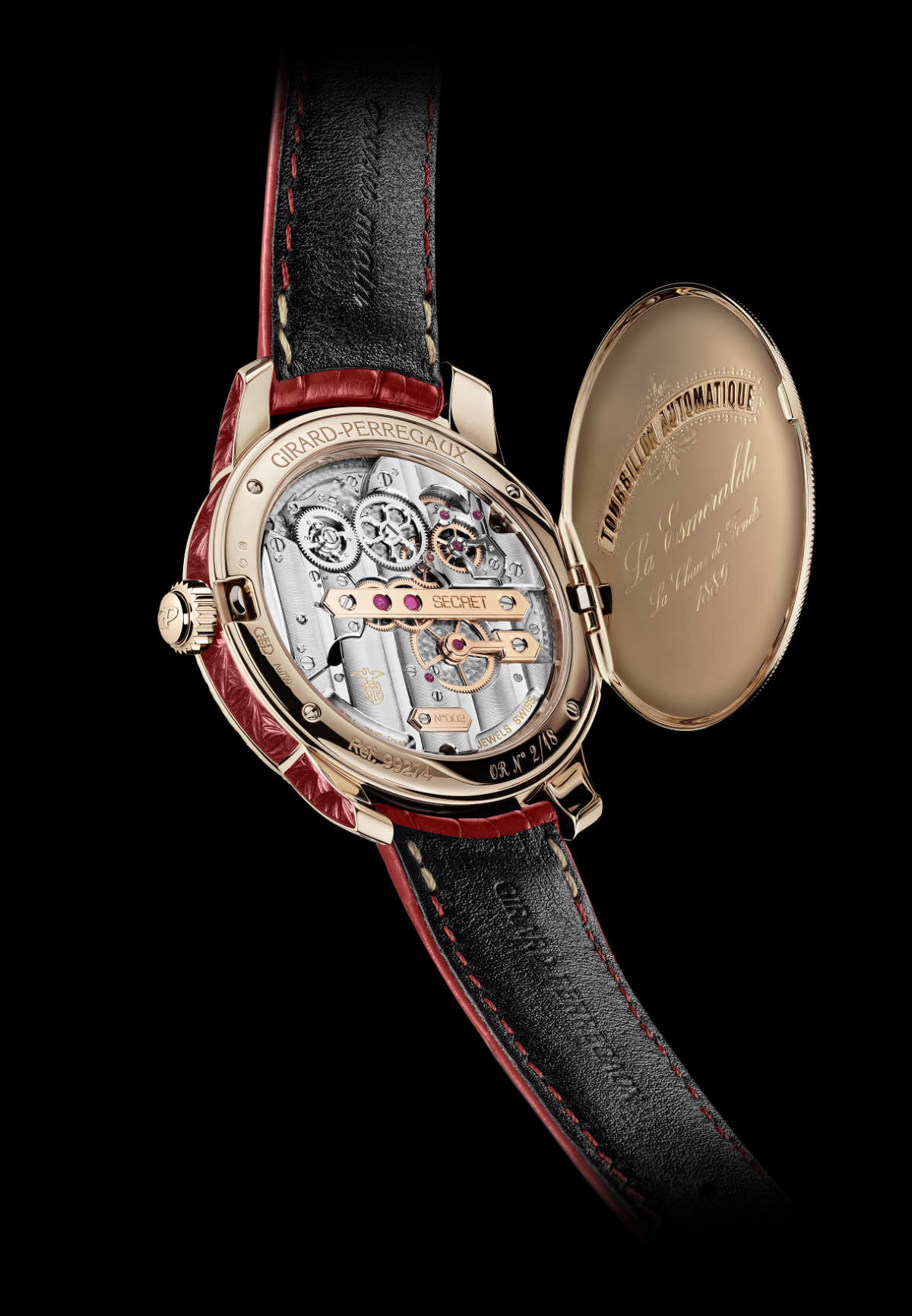 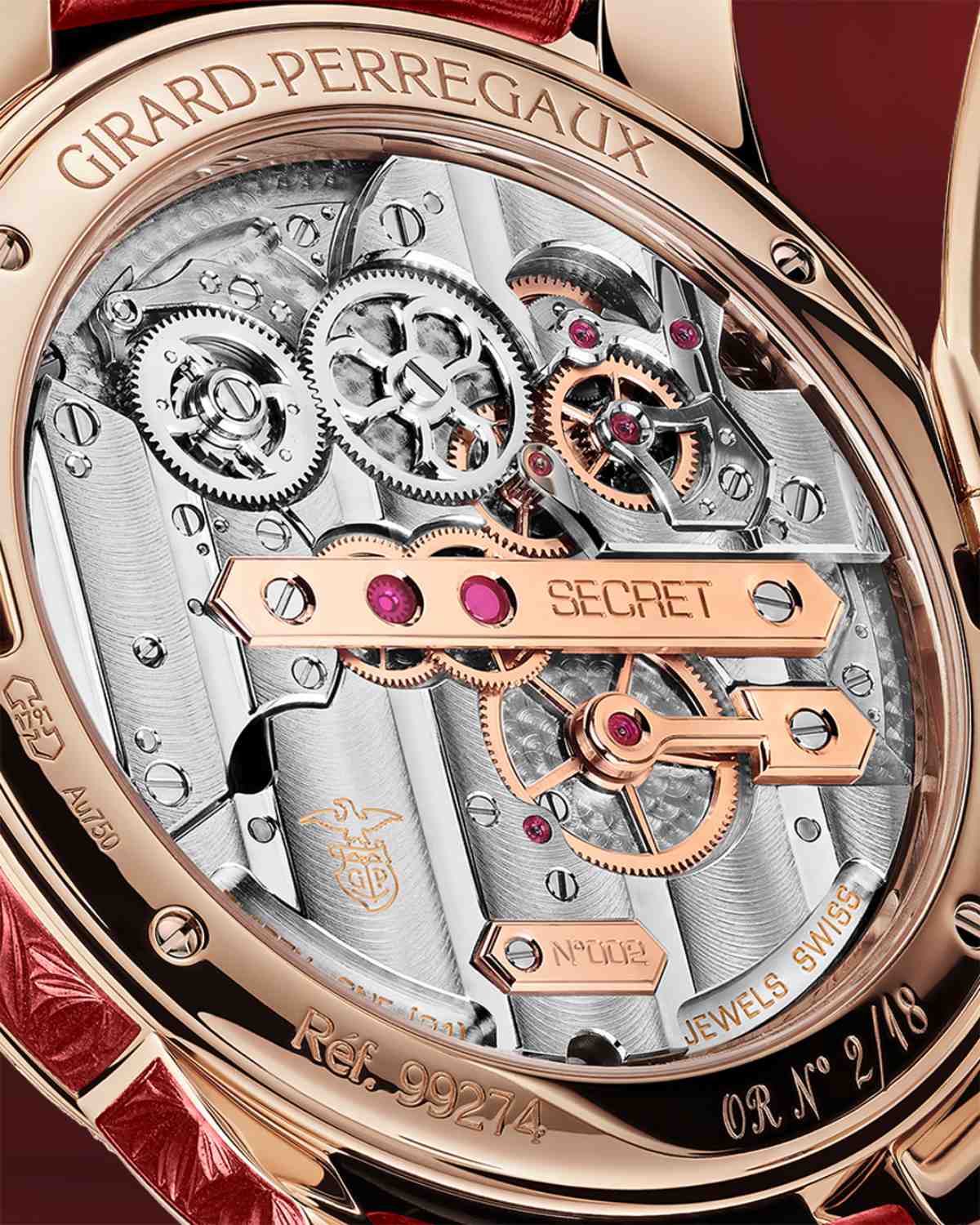 La Esmeralda is the famous prize winning pocket watch made for the ‘Exposition Universelle’ in 1889. This legendary pocket watch blend ed extraordinary precision with several artistic crafts. As the Manufacture celebrates its 230 year anniversary, it has revisi ted its iconic timepiece of 1889 and created a wristwatch that both celebrates the Maison’s heritage and showcases its amassed and c onsiderable know-how.

Birth of a legend

During the 19th century, ‘Universal Exhibitions’ were held, showcasing the latest technological advances of their day. Various nations would participate and the most meritorious exhibits won prizes, medals and distinctions. While other countries would also go on to host world expositions, Paris proved a particularly popular venue for such events, hosting the ‘Exposition Universelle’ in 1855, 1867, 1878 and 1889.

In 1860, Constant Girard, a brilliant watchmaker who spent most of his life dedicated to the field of chronometry, created a tourbillon chronometer equipped with three nickel silver bridges. Later, in 1867, Constant entered the Observatoire of Neuchâtel competition where his watch won first prize, setting a record that remained unchallenged for many years. Again, in 1867, the same watch won a medal at the Exposition Universelle, Paris. What differentiated Constant’s work from that of his peers was that he didn’t restrict his efforts to technical details alone but also expended much effort refining the architecture of his movements. In particular, the famous three bridges he employed on his watches were not merely functional, but also designed to be visible and attractive. Over time, the design of the arrow-shaped bridges became increasingly stylised, encompassing numerous facets. Furthermore, the three bridges were ennobled, transitioning from the nickel silver found on the early pocket watches to the now famous golden bridges. A legend was born.

Constant would visit Paris again in 1889, entering another pocket watch for the ‘Exposition Universelle’. The renowned watchmaker unveiled the Tourbillon with Three Gold Bridges, a pocket watch housed in a sumptuous pink gold case, measuring 56mm in diameter and fitted with a detent escapement. The case was elaborately engraved by Fritz Kundert, an acclaimed artisan based in the ‘Neuchâtel mountains.’ In September 1889, the watch received a diploma and gold medal at ‘Exposition Universelle’. After the event, a famous watch and jewellery retailer, Hauser, Ziwy & Co, which operated ‘La Esmeralda’ stores in Paris and Mexico, was tasked with selling the prize-winning watch.

The watch, ultimately called ‘La Esmeralda’, was sold to Porfirio Diaz, then president of Mexico (1830-1915). In 1970, a descendent of the president offered the Manufacture the opportunity to purchase the watch and it now forms part of the Maison’s museum collection.

While La Esmeralda was a highly precise pocket watch, its charms were not merely restricted to its engraved case and golden bridges. For instance, it was fitted with a sumptuous white grand feu enamel dial. Moreover, Poire Stuart hour and minute hands, featuring a filigreed design, contributed to the watch’s elegant mien. Finally, the savonette case, incorporating a hinged dust cover, was beautifully engraved with three horses. However, despite having extensive archives, Girard-Perregaux can find no record regarding the significance of said horses. Indeed, the horses have now become known as the ‘equine mystery’.

A re-interpretation of a legend. An eternal charm.

Last year, as Girard-Perregaux celebrated its 230th anniversary, the Manufacture unveiled La Esmeralda Tourbillon "A Secret" Eternity Edition, a wristwatch employing the Maison’s legendary watchmaking know-how as well as encompassing an array of artistic crafts, executed to an exceptional standard. This creation re-interprets the design of the legendary 1889 ‘La Esmeralda’ pocket watch and references many of its extraordinary refinements. However, it is not a facsimile of what has gone before, but a tasteful homage to Constant Girard’s prize-winning watch of yesteryear. It is perfectly in tune with the expectations of a modern-day audience but respects La Esmeralda and seeks to capture its eternal charm.

Patrick Pruniaux, CEO of Girard-Perregaux, remarked, “La Esmeralda is unquestionably our most famous watch and as the current custodian of our Maison, I am always mindful that we should treat such a legend with due reverence. This year, the Manufacture is celebrating its 230th anniversary and we were keen to ensure this milestone did not pass by unnoticed. Already this year we have unveiled several fabulous watches, however, La Esmeralda "A Secret" Eternity Edition is without doubt the most ambitious creation we have released to date. It draws upon our vast knowledge of Haute Horlogerie, in particular tourbillons, embraces several types of artistic crafts and, at the same time, honours the history of La Esmeralda, a watch that continues to exhibit lasting appeal.”

Three gold bridges span the dial, similar to those fitted to La Esmeralda of 1889. However, on this latest model, Girard-Perregaux has once again made the invisible visible by bringing the horses engraved on the back case of the original pocket watch up to centre stage of this new timepiece. Indeed, two hand-engraved galloping horses form the right and left ends of the barrel bridge and tourbillon bridge. Each bridge is painstakingly finished and features concave bevelling, mirror-polishing, flanks with horizontal ‘traits-tirés’ and rounded off arms. It requires 40 hours to finish all three bridges, while the additional engraving found on the barrel bridge and tourbillon takes an extra 50 hours to complete.

While the La Esmeralda Tourbillon "A Secret" Eternity Edition celebrates the Manufacture’s history and upholds many of its historical techniques, it also incorporates cutting-edge technology. For example, the elaborately formed mainplate is made using a CNC-machine and produced to infinitesimal tolerances unimaginable back in the 19th century. However, once milled, the mainplate is finished to the exacting standards befitting the term ‘Haute Horlogerie’. This is just one example of how Girard-Perregaux has repeatedly juxtaposed modern-day know-how with traditional expertise.

The mainplate (caseback side) is embellished with a new form of finishing, an industry first exclusive to Girard-Perregaux. Where some high-end watches feature a bevelled edge, presented at 45°, spanning the surface and the flank, this model encompasses concave bevelling. This involves creating a curved recess between the surface and flank, catching light wonderfully and transitioning from one shade to another.

As its name implies, the watch is fitted with a secret cover. By pressing the crown pusher, the secret cover opens, revealing the self-winding movement, the Calibre GP09600-1506. Beneath the secret cover, the mainplate is fitted with a motion-work bridge and marking plate. Both are made from pink gold and incorporate traits-tirés and hand-polished angles, thereby emulating the shape of the famous Gold Bridges. The motion-work bridge is marked ‘secret’. The inside of the hinged secret cover is hand-engraved with various inscriptions, albeit these can be personalised on request.

Both the barrel and the mainplate (dial side) are enlivened with various guilloché patterns, performed using a traditional rose-engine lathe, operated by a time-served artisan. The rose-engine lathe is a manually operated machine, devoid of power or electronics. The expert places the dial in the machine and with one hand rotates it at a steady speed. He or she employs their other hand to press the chisel or cutter against the dial to remove material. The pattern is created by using various ‘rosettes’. This technique requires several years to master. Indeed, in order to create a beautifully defined pattern the artisan must ensure the rotational speed and the pressure they apply to the chisel remain constant at all times.

The dauphine-type hour and minute hands are formed of pink gold and circumnavigate an intricate and beautifully appointed dial. Beyond its three iconic bridges and the aforementioned guilloché dial, the watch is endowed with several additional delights for the delectation of purists. The central area of the dial and mainplate is recessed, accommodating the barrel, centre wheel and tourbillon cage. A rhodium plated barrel sits in the upper portion of the dial and features golden engraved text. This detail recalls the text found on the barrel of the original La Esmeralda, declaring the model’s patented status. A white gold micro-rotor sits beneath the barrel, out of sight, energising the mainspring with minimal user input.

A tourbillon cage is positioned in the lower portion of the dial. Made using state-of-the art technology, the lyre-shaped cage, comprised of 78 components, weighs just 0.3g. This low mass helps mitigate power-consumption, contributing to the model’s power-reserve of at least 50 hours. A blued steel hand is affixed to the tourbillon cage and serves as a small seconds display.

The pink gold case is totally hand-engraved, honouring the skilful work of Fritz Kundert, the artisan tasked with engraving La Esmeralda in the 19th century, as well as the dedication and skill of the modern-day artisans of La Chaux-de-Fonds. The bezel, caseband, lugs and buckle are engraved with a delicate leaf motif. The outerpart of the cover is adorned with a fluted pattern. Additional engraving graces both the inside and exterior of the secret cover.

La Esmeralda Tourbillon "A Secret" Eternity Edition is introduced as part of the Eternity Edition series, paying homage the eternal beauty of enamel. This contemporary Interpretation has taken use this métier d'art one step further than Its historical forebearer, extending the enamelling onto the outer case sides and lugs - all of which has been executed in-house. The enamel comprises a mixture of silica, minium, potash and soda which are ground into a powder. Additional metal oxides are then added to create different coloured enamels. The powder is dusted onto the dial and then fired in an oven that typically operates at about 800°C. This process is repeated on 5-10 occasions to achieve the desired lustrous appearance. Grand feu enamelling takes much expertise to master, however, even with experience the repeated firings can still result in cracks appearing, air bubbles and colour imperfections. Inevitably, many dials fail to pass muster and are discarded. However, the main benefit of this protracted process is that flawless grand feu enamels dial will retain their colour forever, promising a lasting joy.

To the rear of the watch, the back of the blue enamelled secret cover features three horses, again inspired by the original La Esmeralda and adorned with a sunray guilloché decoration and blue grand feu enamel. The horses return, but their origin remains an enigma or, as they say at the Manufacture, ‘an equine mystery’.