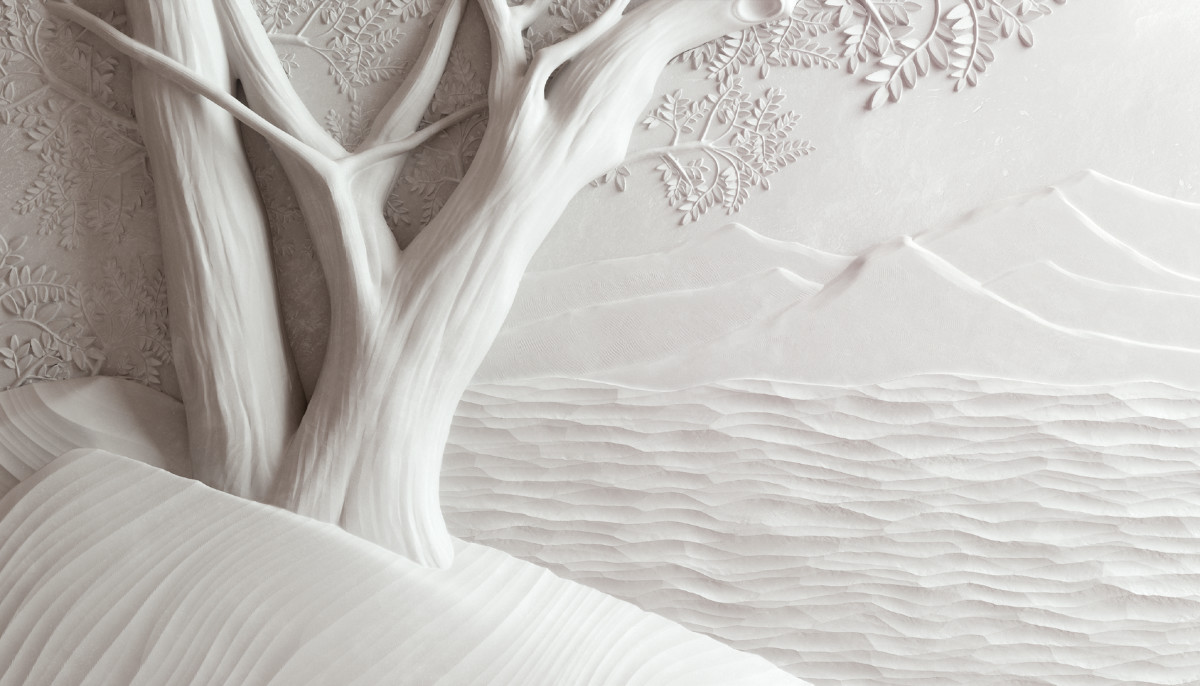 IT COULD BE A TIGER, OR A GIRAFFE. 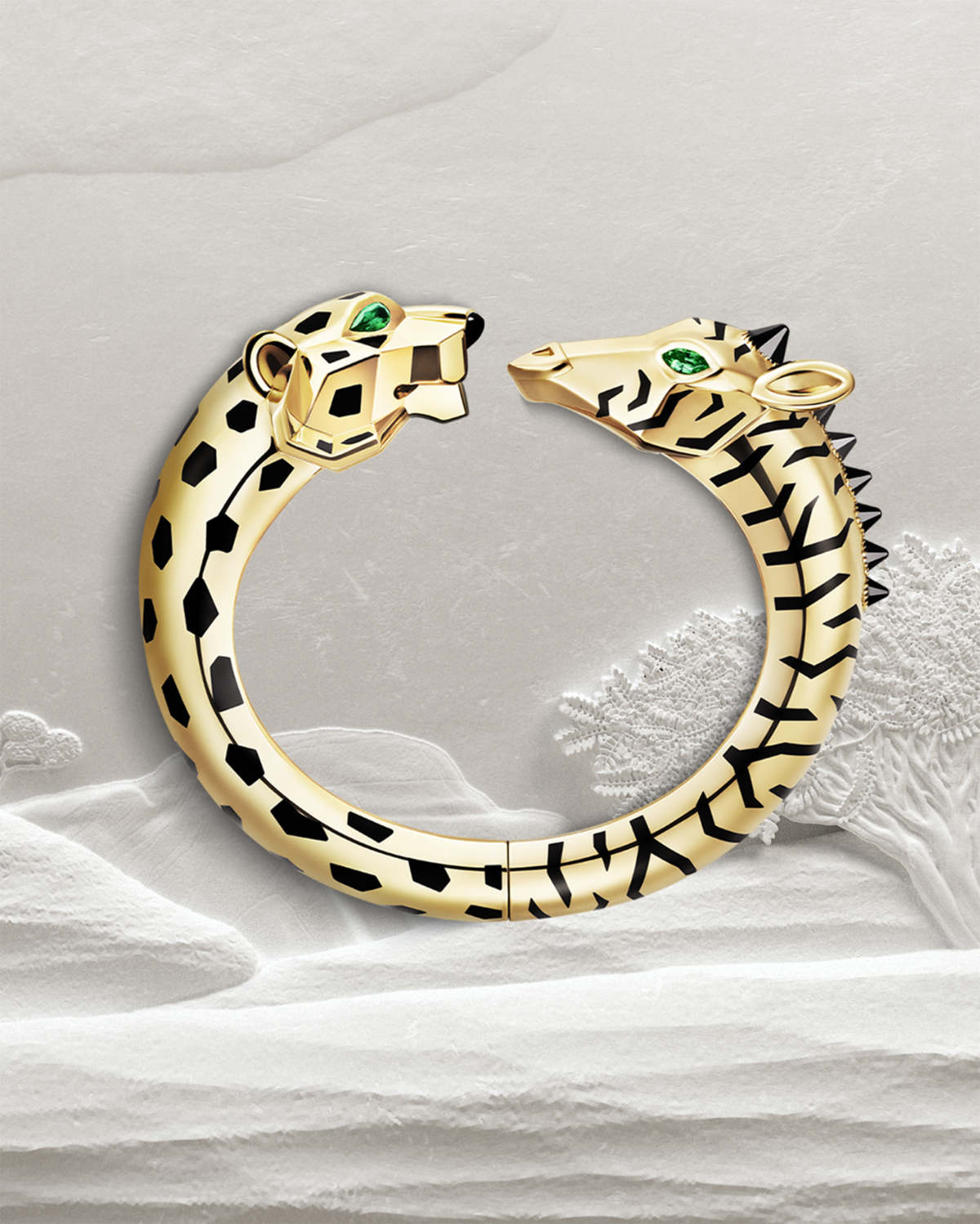 A CROCODILE, OR A ZEBRA. 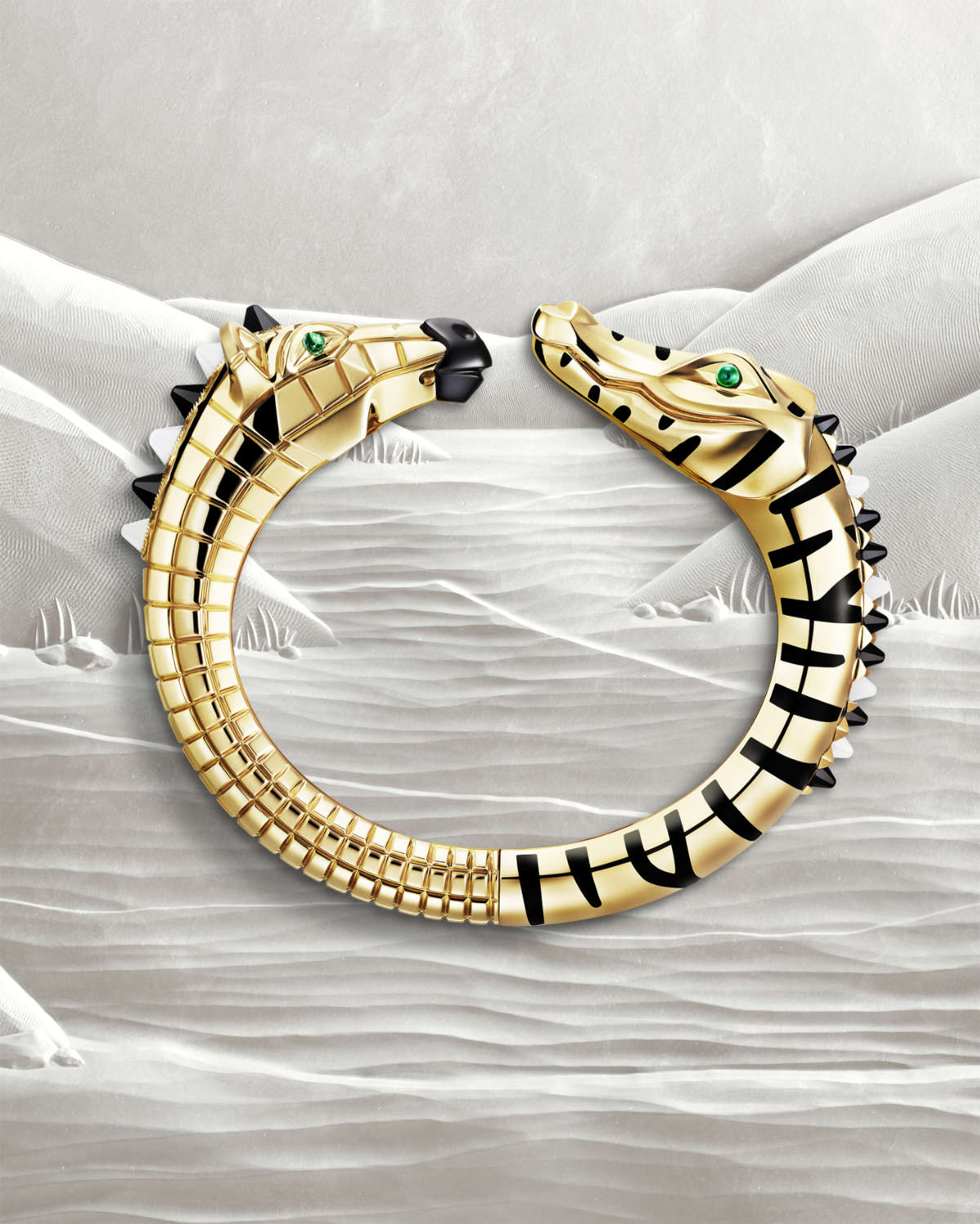 WILD AND UNTAMED, MORE THAN EVER BEFORE.

The Cartier menagerie plays with a new jewellery and watchmaking collection that spurs unexpected encounters between animals. 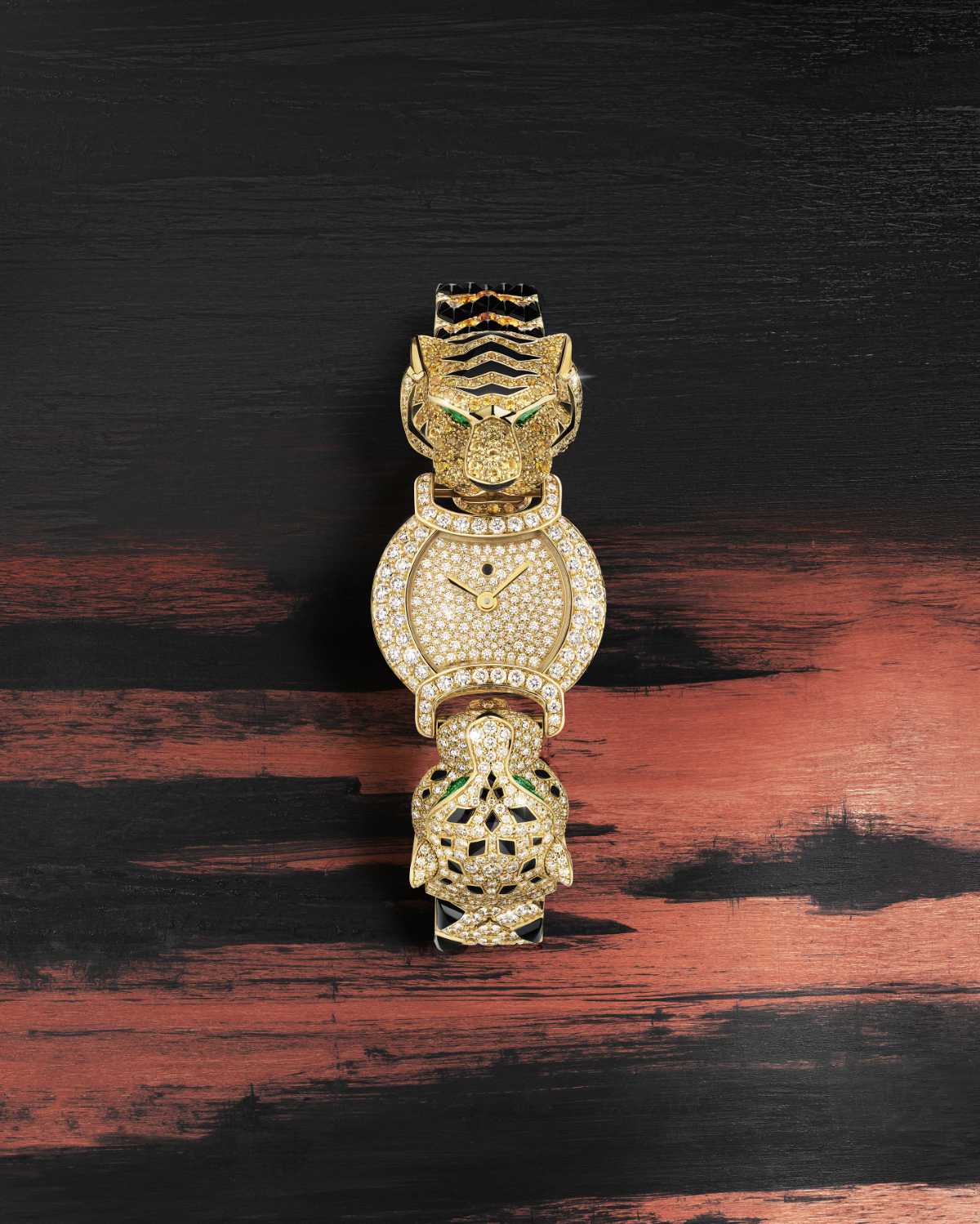 Essentially, the concept is tête-à-tête-inspired jewellery. Bracelets, necklaces and watches that contrast two animals from Cartier’s fauna. While their heads stay true to the image we have of them, their bodies are transformed: the scales of the crocodile adorn the zebra, which passes on its stripes to the panther. Meanwhile, the giraffe and tiger exchange their fur... there is a playful and creative carnival which pushes the imposed boundaries of figuration. 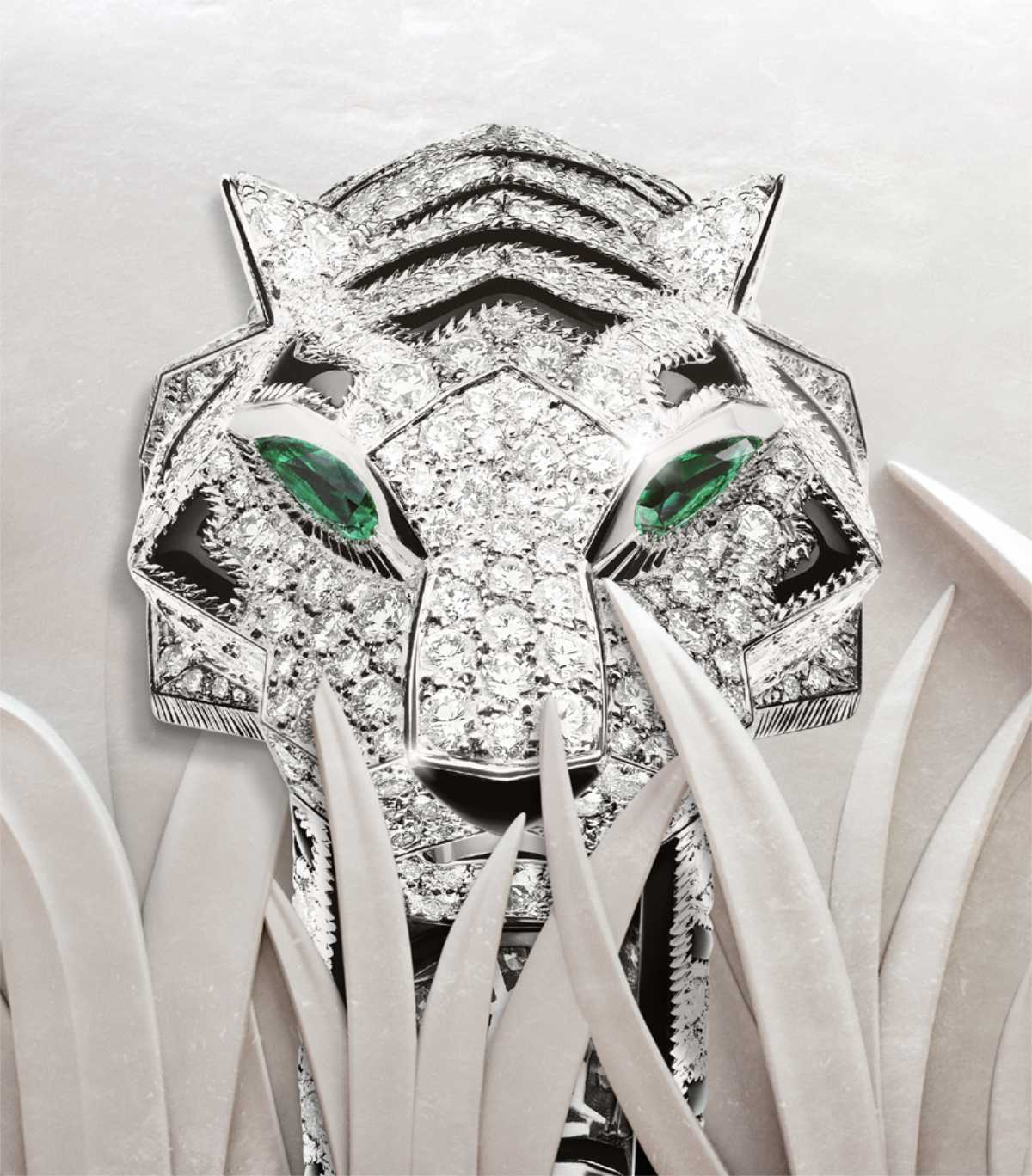 With its Indomptables collection, Cartier dares to create jewellery hybrids through strong, graphic pieces: bracelets, watches and sculptural torques featuring powerful volumes. From the ears to the jaw, eyes and nose, the aesthetic tension lies in the scale of the design, which is clean and precise. Produced by Cartier’s jewellery and watchmaking creative studios, this extravagant collection is characterised by its ultra-realistic design that emphasises the depth of every detail. It features ten spectacular pieces, all bearing the naturalist hallmark of the Maison. 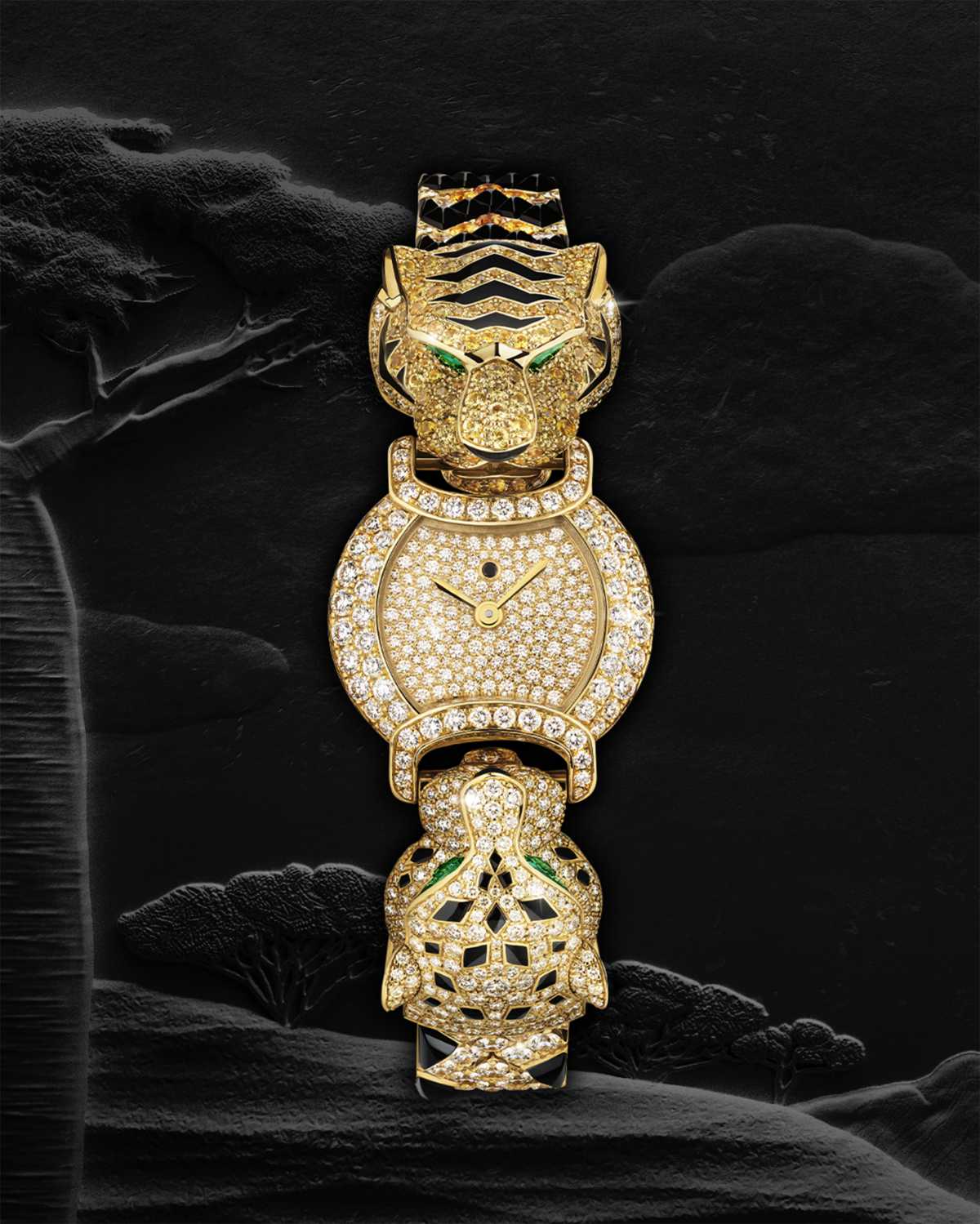 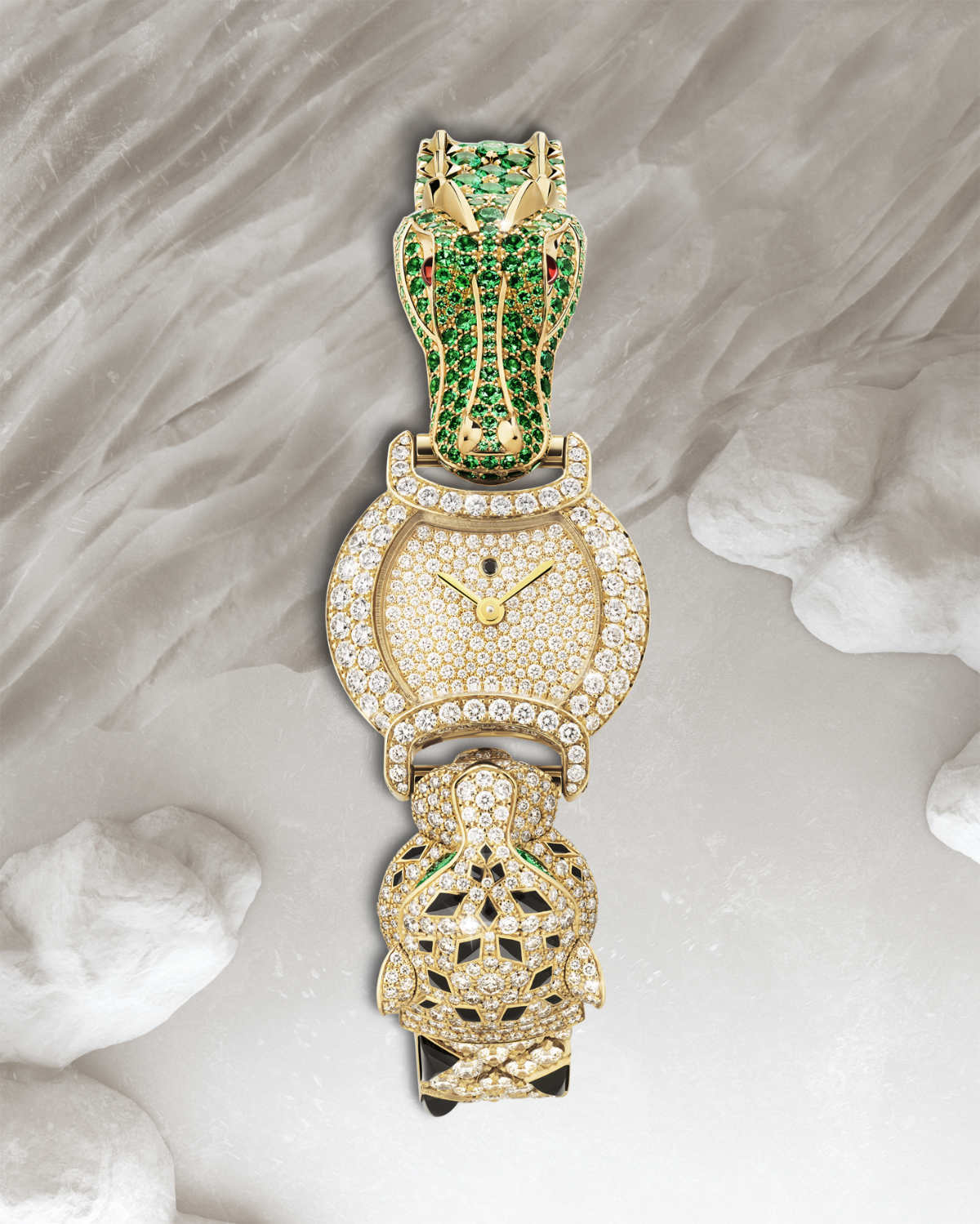 Two torque necklaces that can be worn as a choker, with one version in yellow gold, feature a tête-à-tête between the zebra and the panther who exchange their black lacquer spots. A version completely paved with diamonds that confronts the giraffe and tiger. Three watches with shagreen-set diamond dials are framed by two bars, one side bitten by a panther and the other by a crocodile, zebra or tiger whose heads are movable. 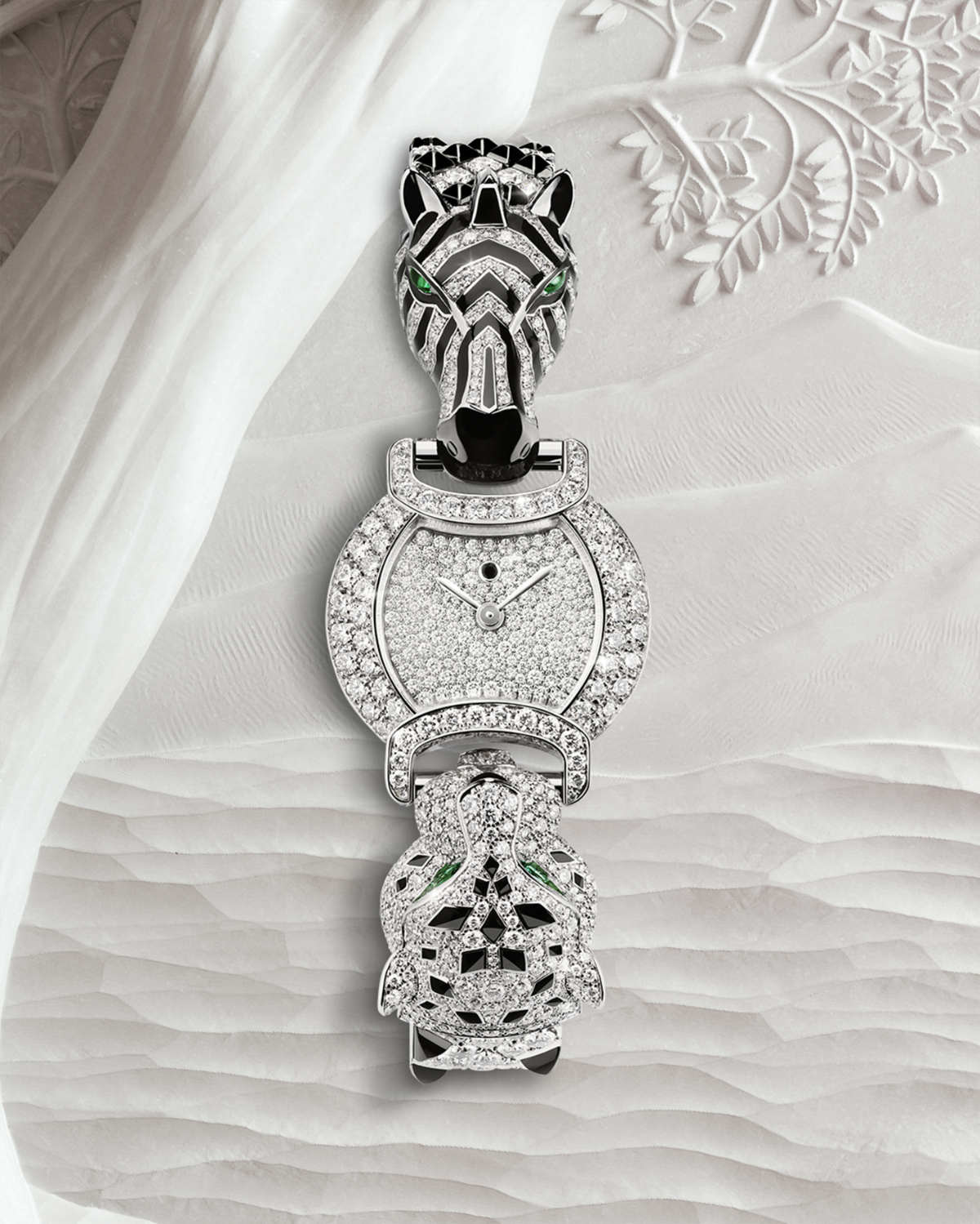 REPRODUCING THE SPIRIT OF THE ANIMAL: THE CHALLENGES OF SAVOIR-FAIRE

Innovative, surprising and playful, the Indomptables collection jewellery pieces have been the subject of many workshop hours at the Cartier design studios. A novel approach to onyx, cut to make a zebra or panther’s nose, as well as diamonds, with which Cartier explores all possibilities through several setting techniques. 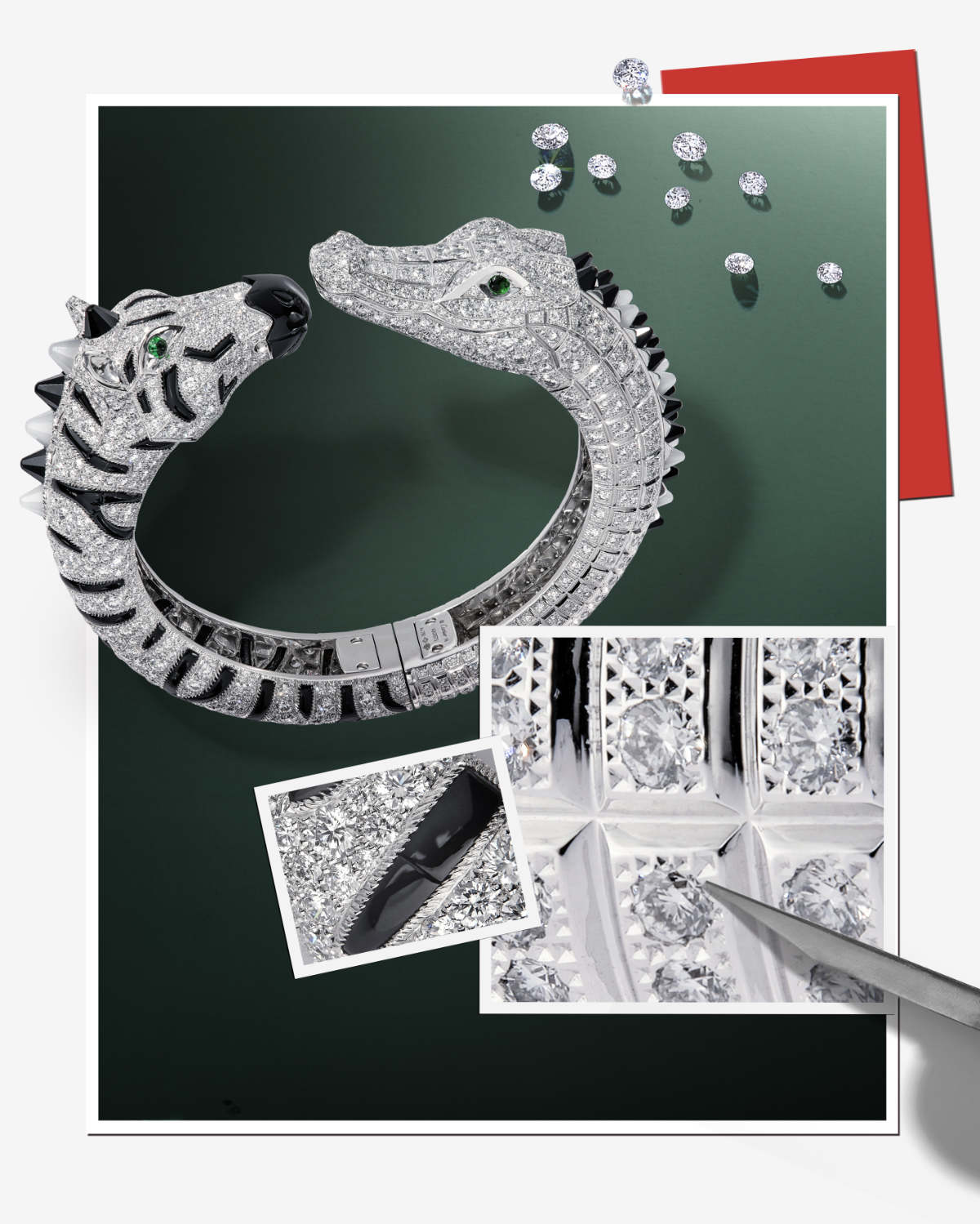 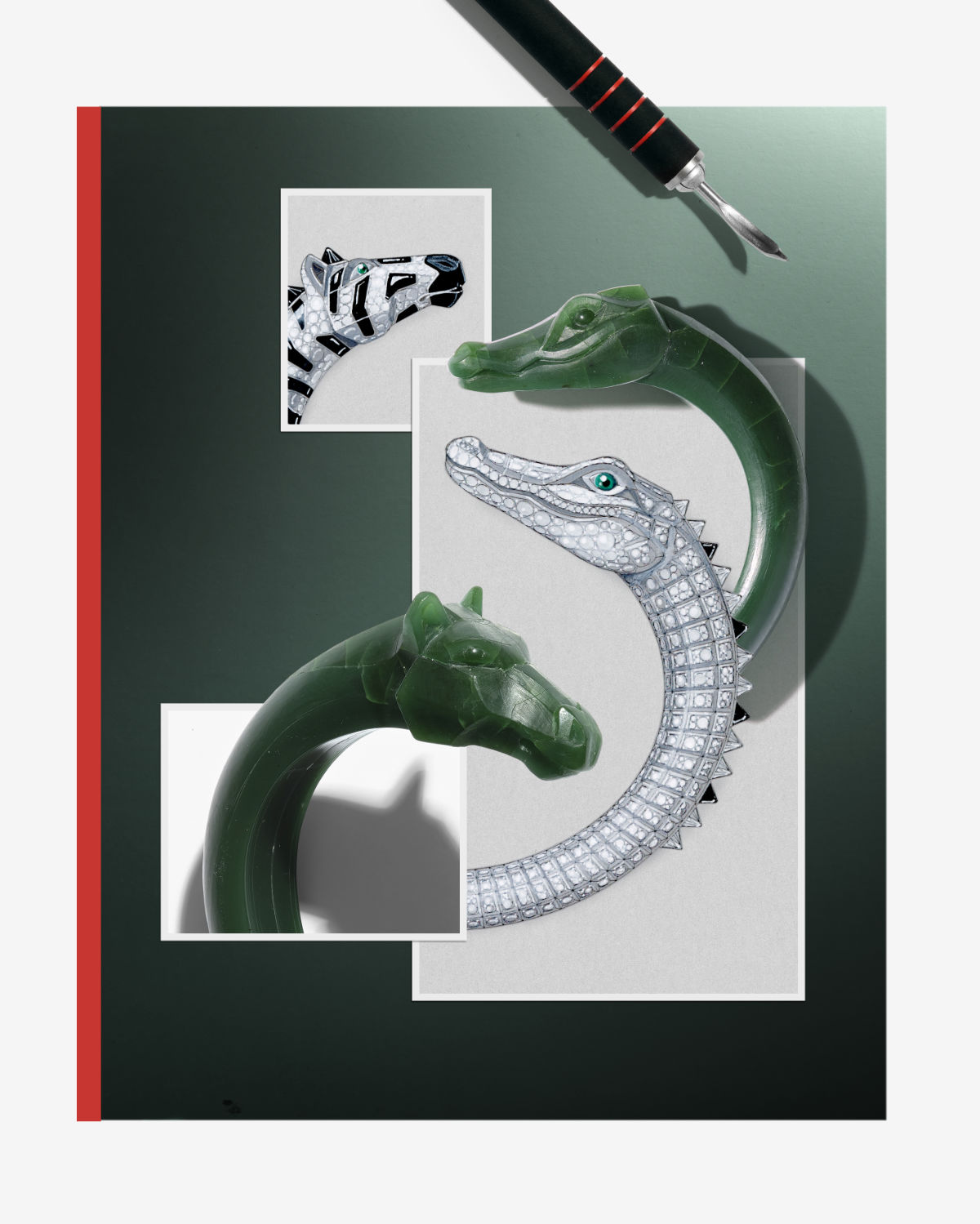 A shagreen diamond setting that adorns all animals in their jewellery form, a setting that maximises the stones’ radiance. The illusion diamond setting on the crocodile bracelet consists of faceting the shiny metal to create an illusion where diamonds and metal merge. And finally, in a fur setting, which is unique to each animal: the Maison’s traditional jewellery making skillset that encircles each stone with minuscule elongated and curved metal grains, transforming them into fur threads that evoke the animal’s coat. 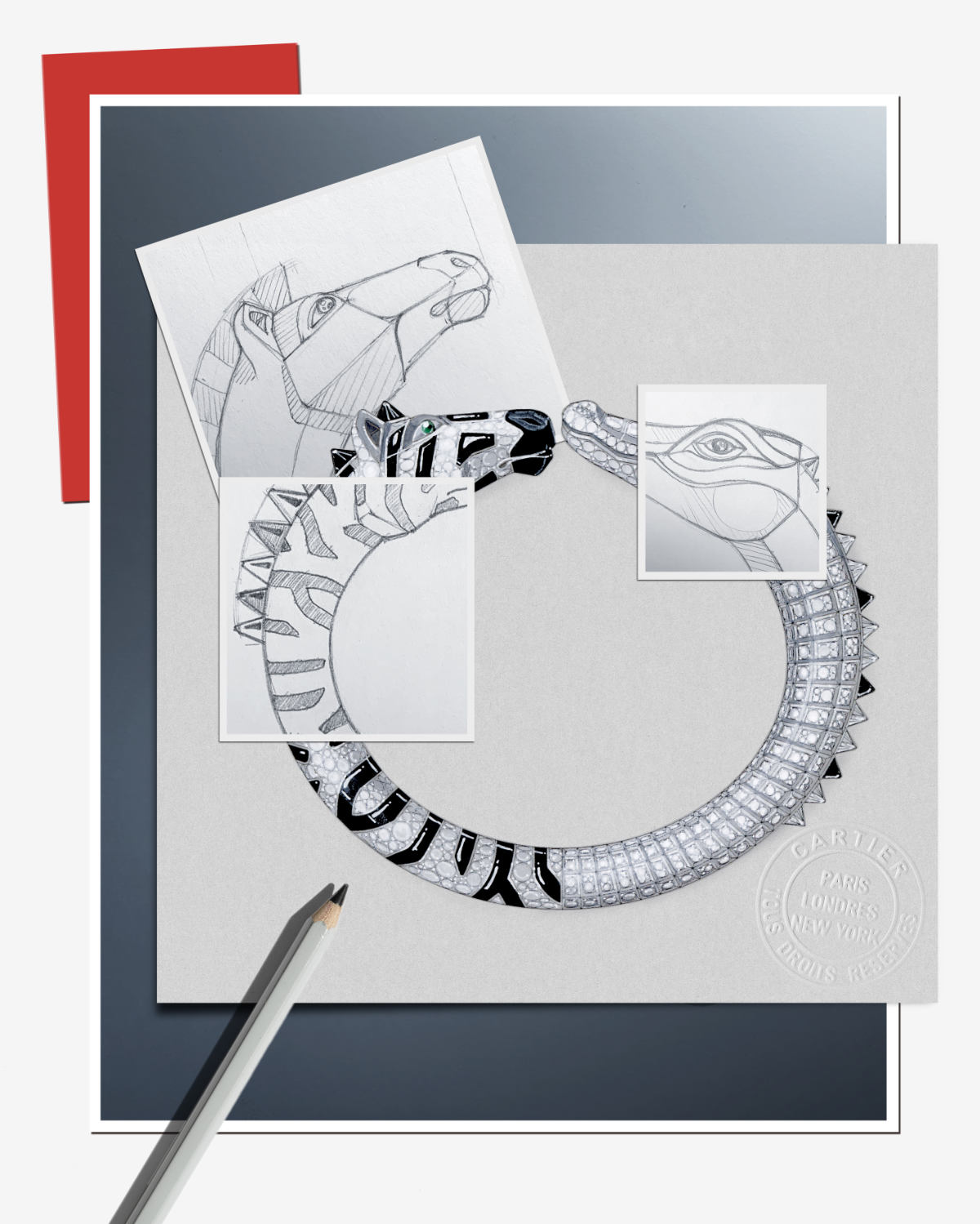 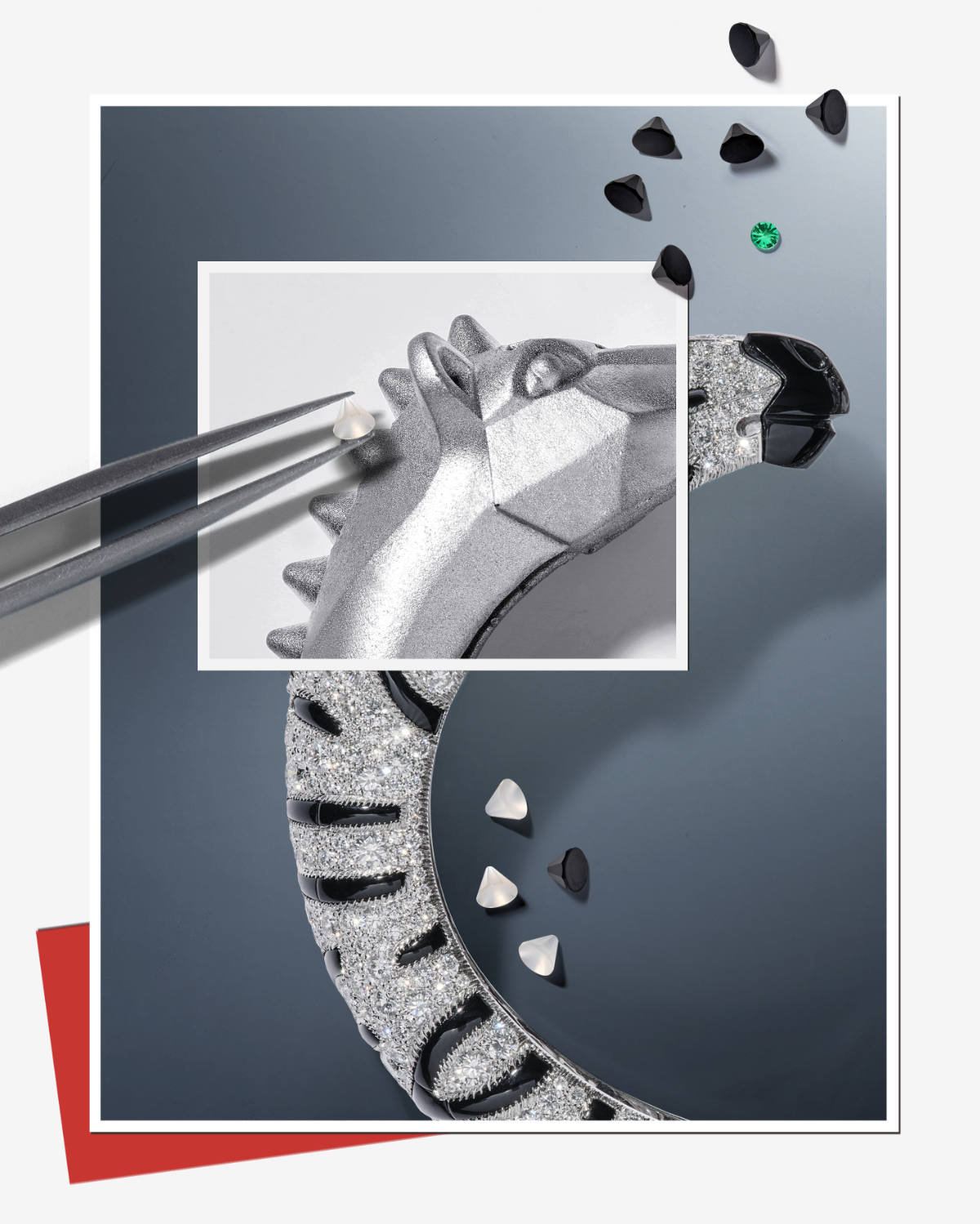 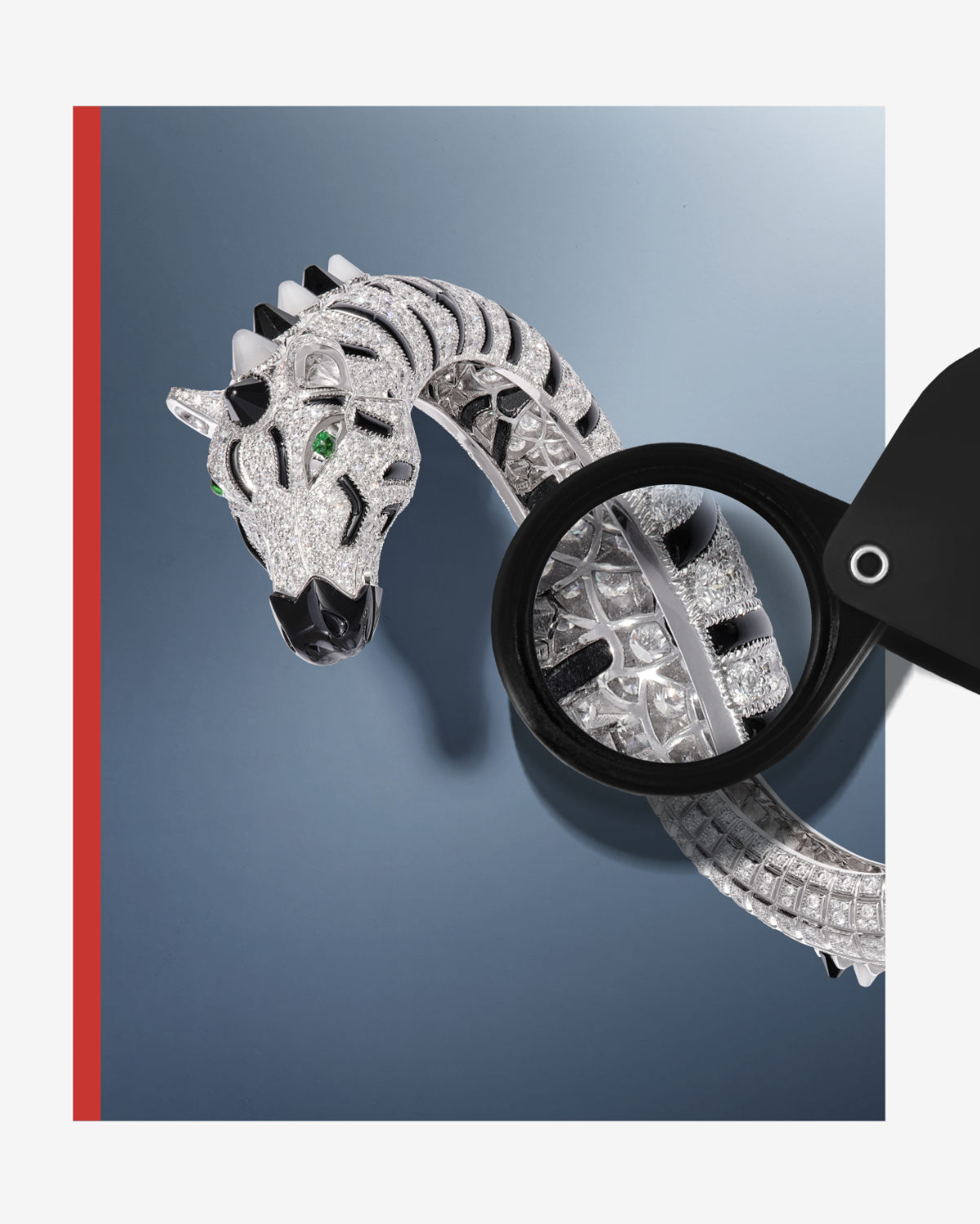 THE TÊTE-À-TÊTE: A THEME DEAR TO CARTIER

The tiger, zebra, giraffe and crocodile are four animals that are characteristic of Cartier’s menagerie, which is ruled over by the Maison’s ultimate emblem, the panther.

Throughout their lives, Cartier has provided them with countless tête-à-tête. This bracelet design, inspired by ancient times, was quickly adopted by the Maison and became highly popular during the 1930s. Two decades later, Jeanne Toussaint, the creative director at the time, revived this type of piece. She promoted a naturalist approach and challenged designers and craftsmen alike to create ever more realistic interpretations of wildlife — of which the Panther is the most emblematic. The “Toussaint taste” was also, in Jeanne’s own words, a "taste for depth". With a passion for sculptures and architecture, she encouraged the amplification of volumes, an approach which is exemplified by these two-headed bracelets. 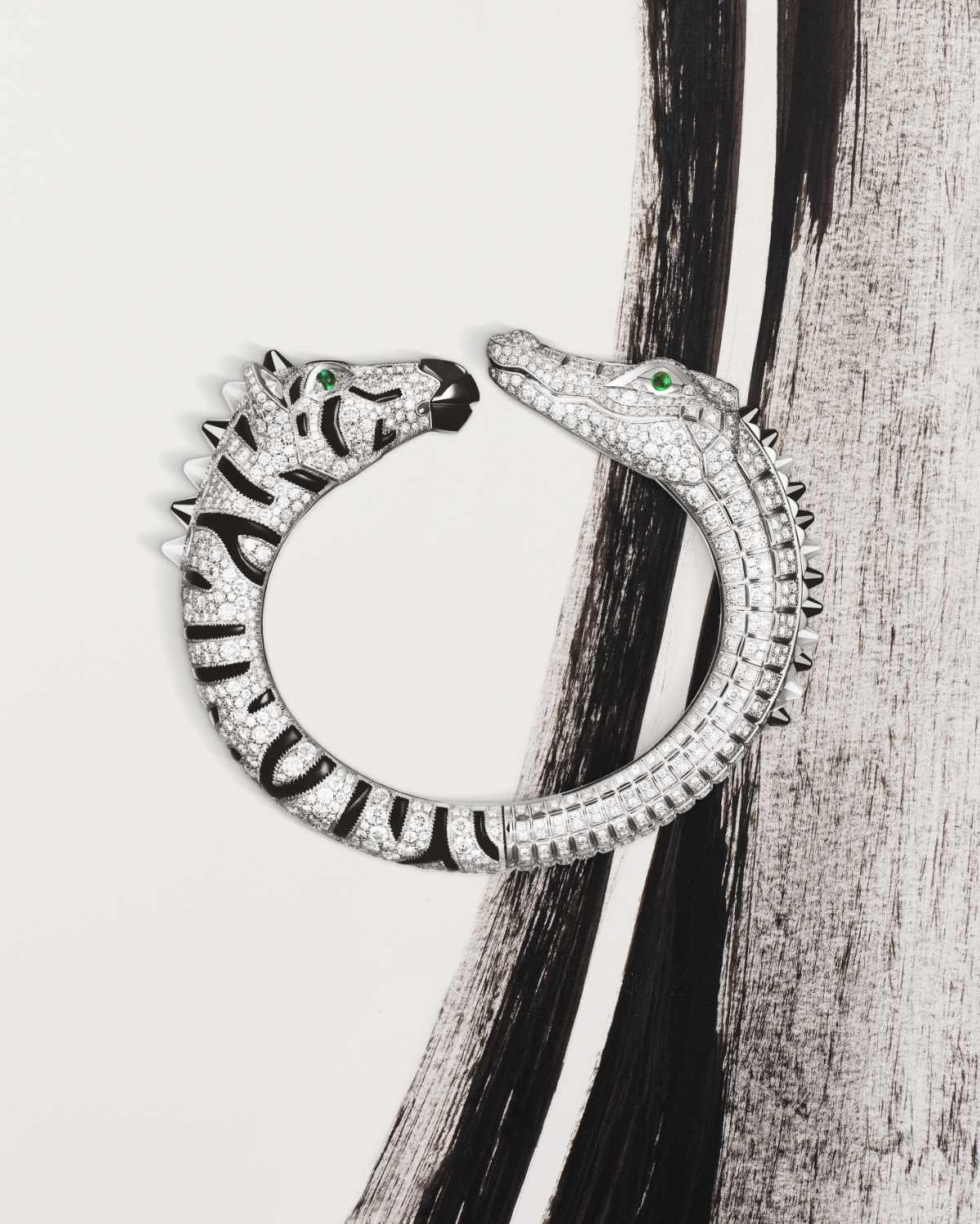 In the 50s and 60s, these head-to-head chimeras or panthers became popular again thanks to strong-willed women who embraced them with style. Then in the 1980s and 1990s, Cartier expanded the animal theme of these bracelets to include new wild animals such as the zebra and giraffe through creations in yellow gold and black lacquer, with designs that revealed a new facet of these animals that were increasingly powerful and graphic. 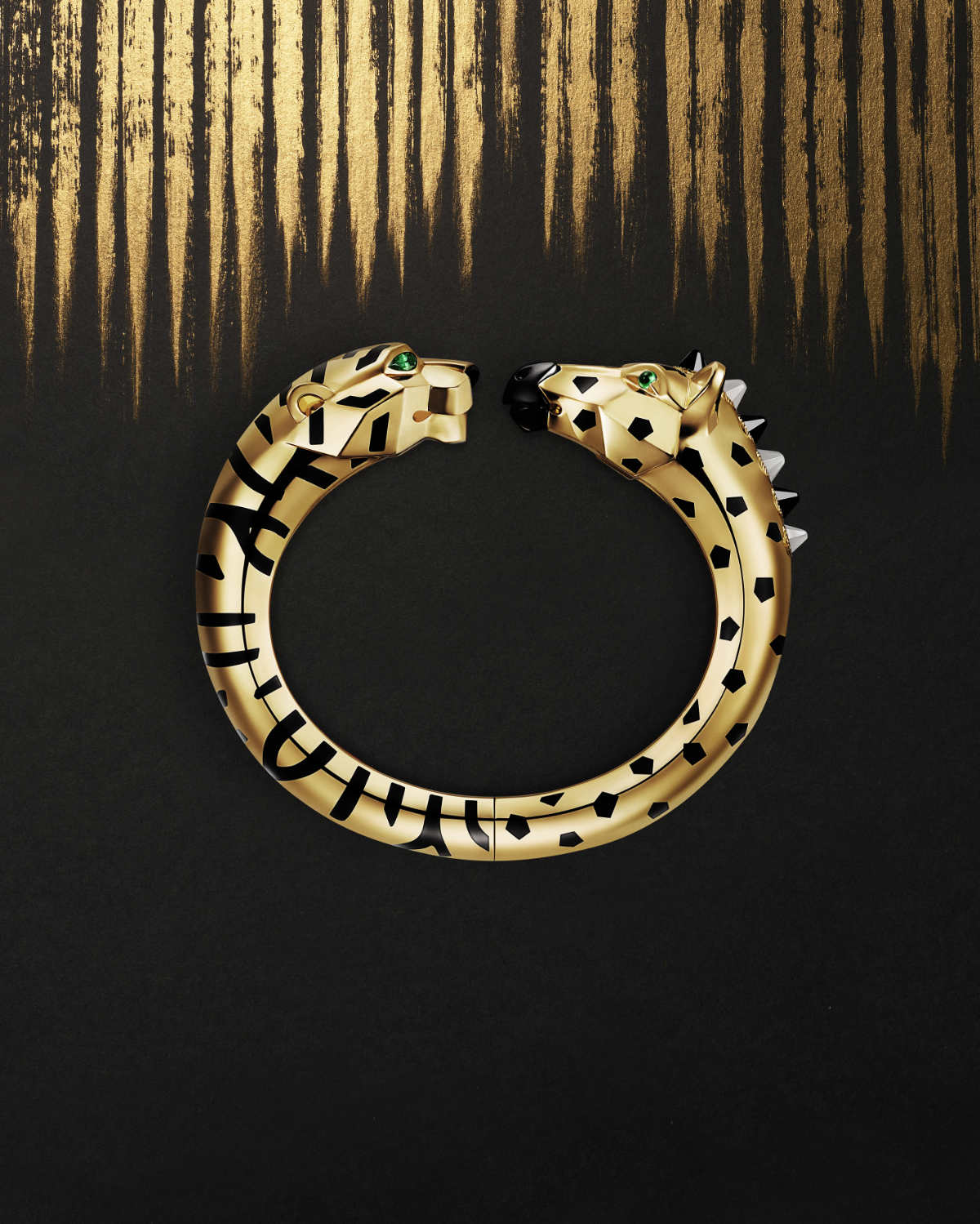 “With their shapes, colours, forms, and effects of volume and stylisation, the tête-à-tête bracelets of the collection reveal an unprecedented dimension of Cartier’s menagerie and its symbolic power. Animal jewellery has the ability to reflect the personality of its wearer, as well as their mood, attitudes and character traits. It’s an opportunity to deliver a message,”Pierre Rainero, Director of Image, Style and Heritage. 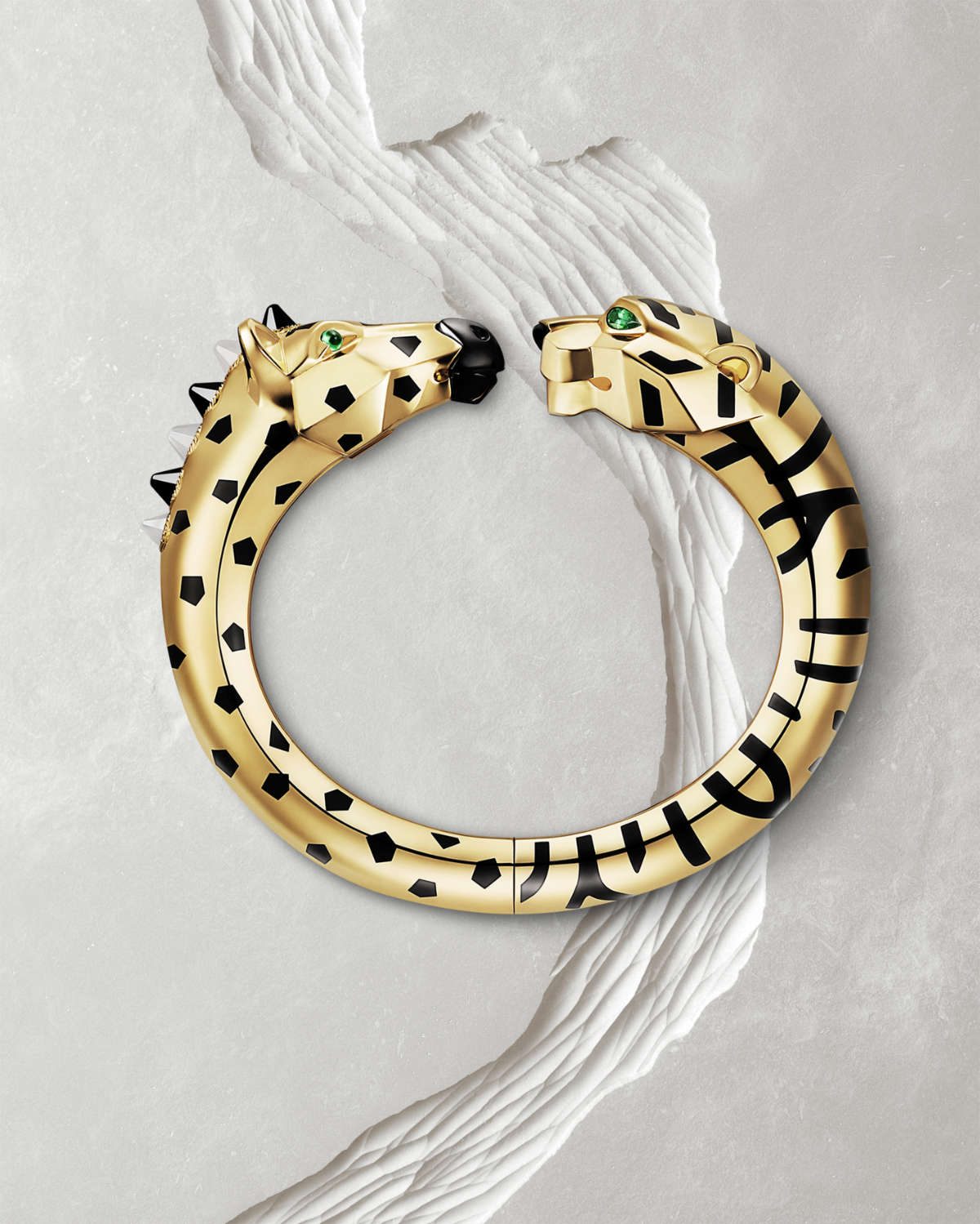 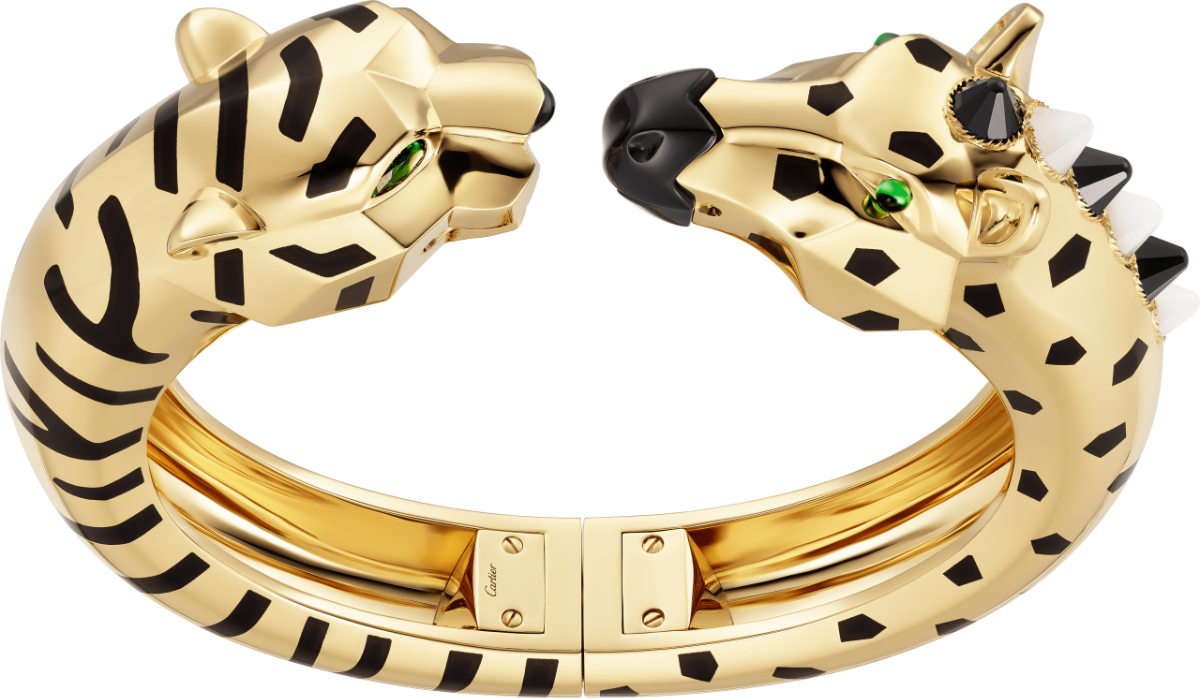 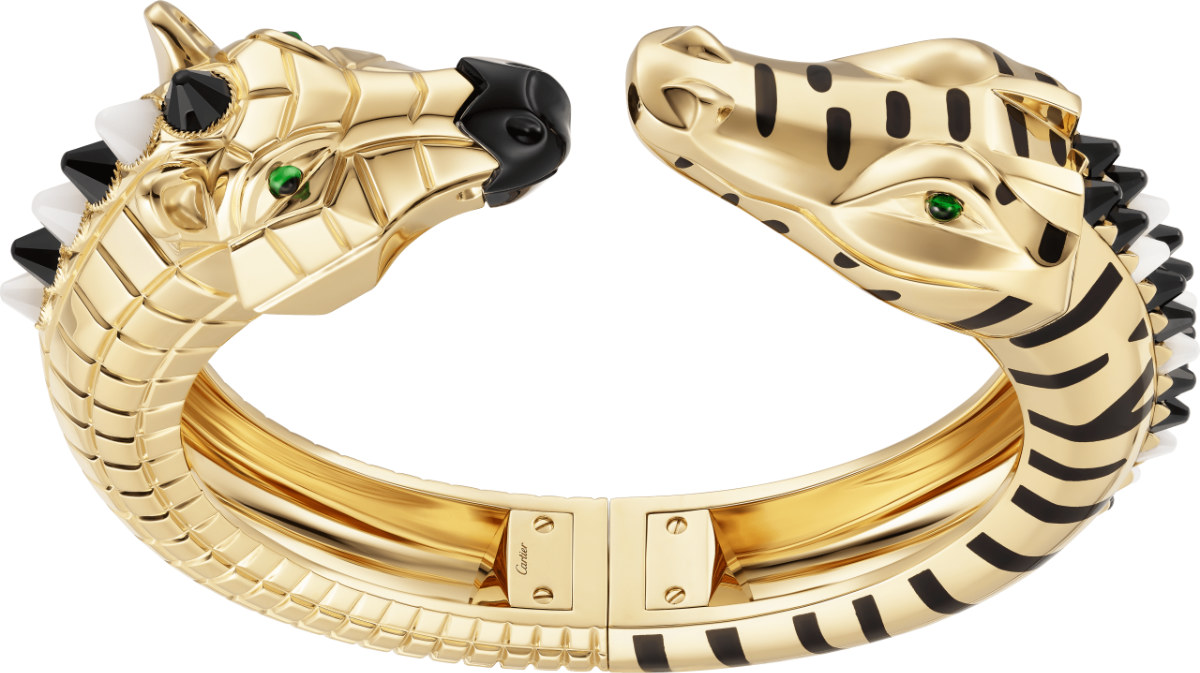 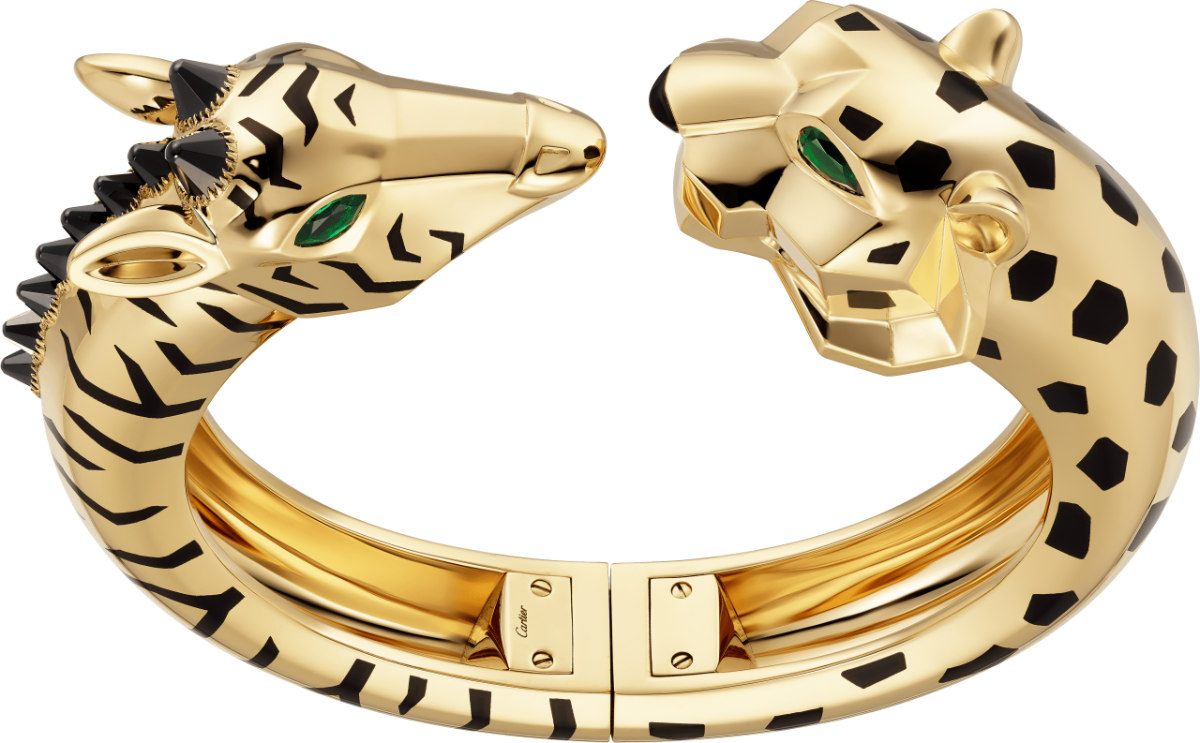 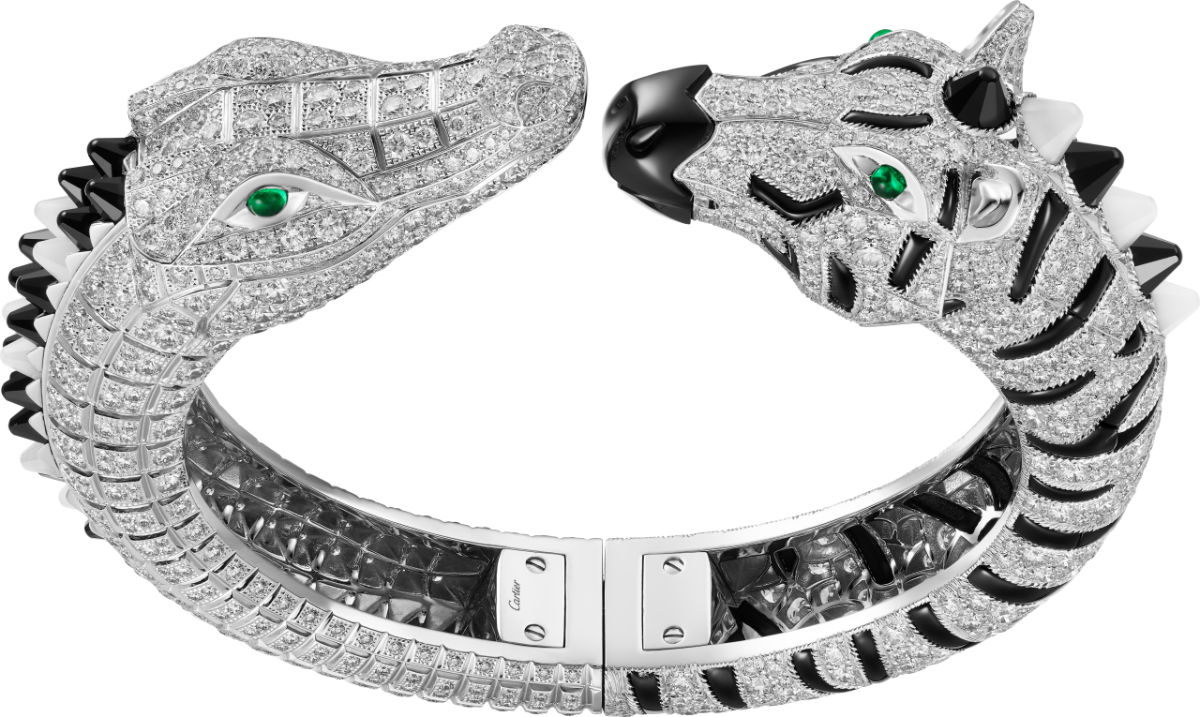 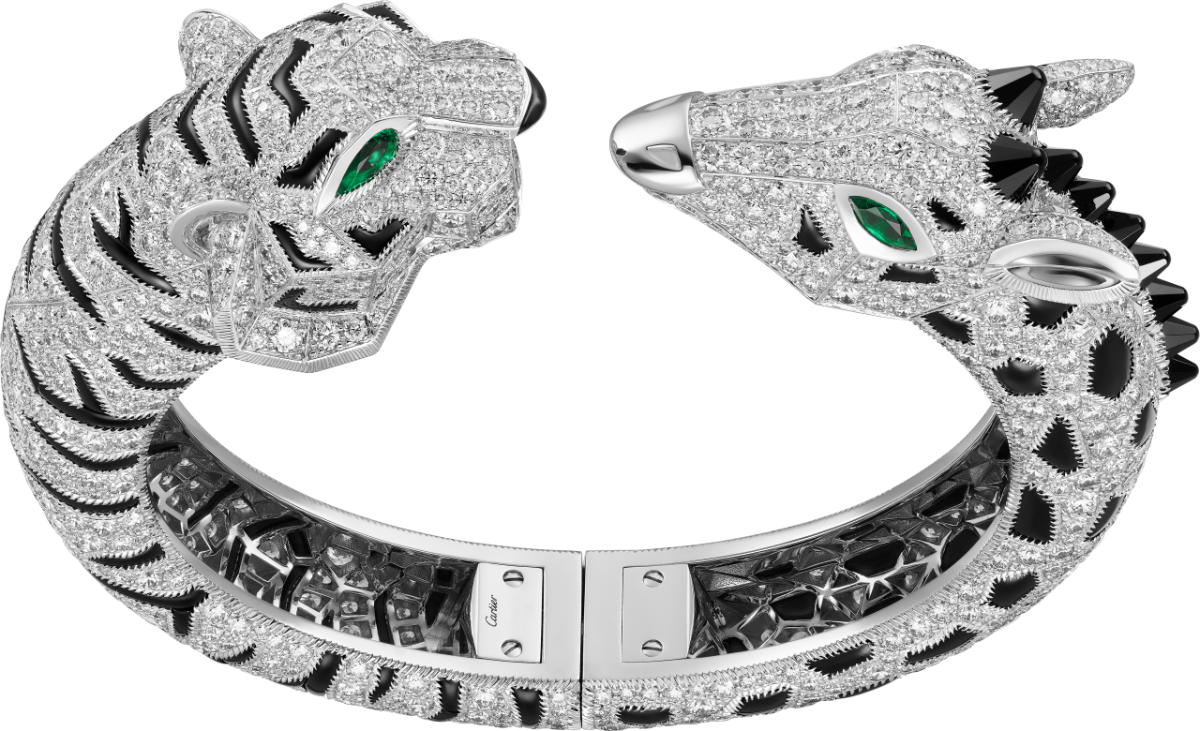 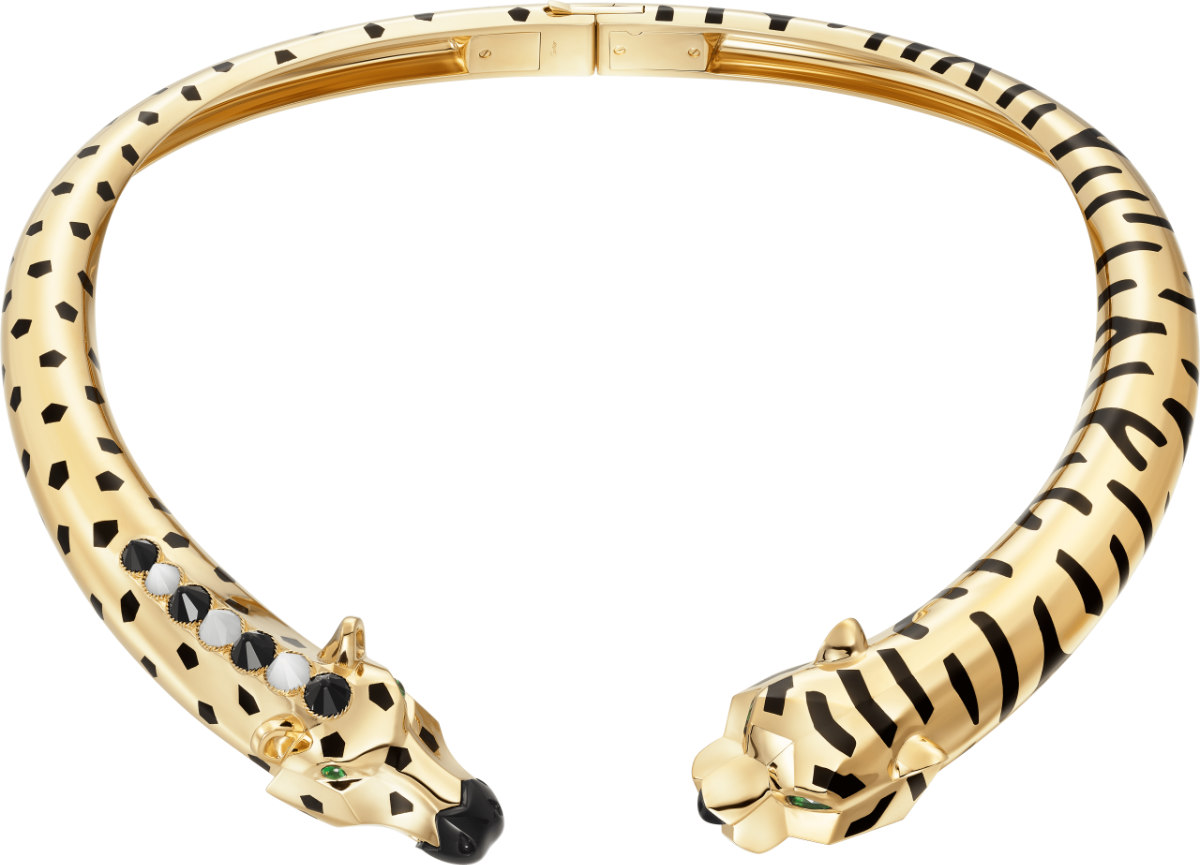 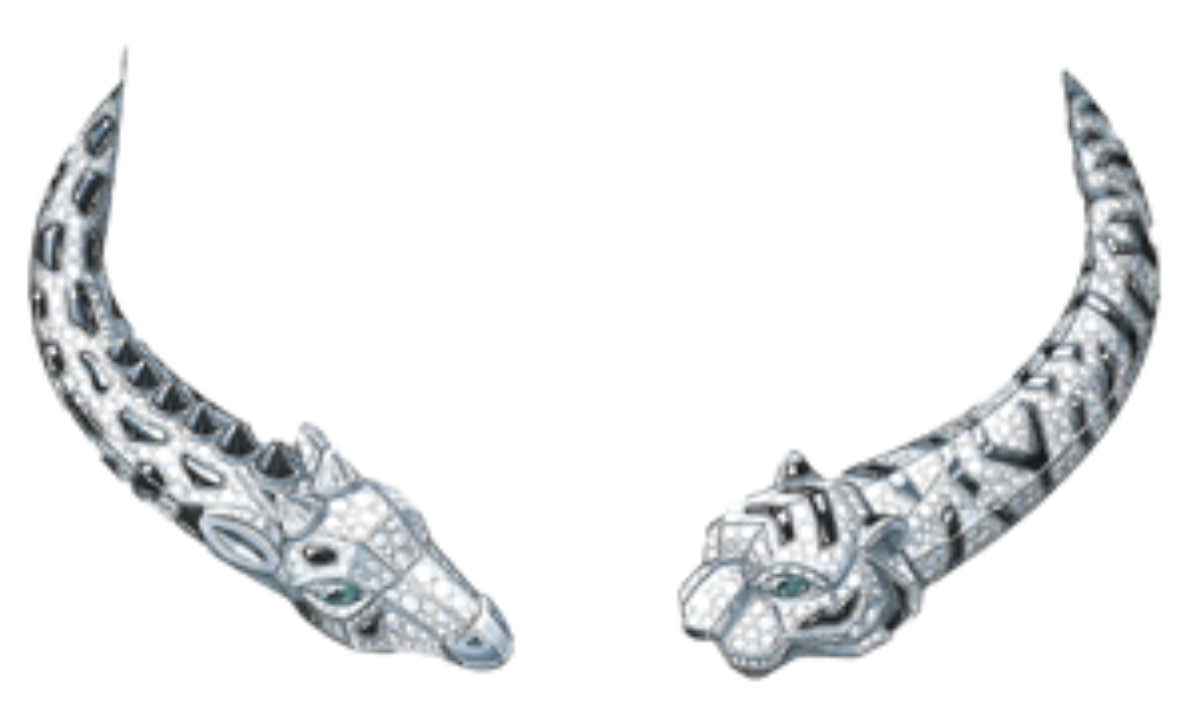