Last year, Girard-Perregaux was announced as the Official Watch Partner of the ultra-luxury British performance car manufacturer, Aston Martin and of the Aston Martin Aramco Cognizant Formula One™ Team (AMF1). Since the organisations began working together, they have collaborated on two watches: the Tourbillon with Three Flying Bridges Aston Martin Edition and the Laureato Chronograph Aston Martin Edition. Now, Girard-Perregaux has, for the first time, worked with the AMF1 Team, creating a new model, the Laureato Absolute Chronograph AM F1 Edition, featuring two industry firsts. This ground-breaking watch unites two worlds, namely, micro-mechanics and the extreme performance of Formula OneTM.

In the competitive world of F1, a mere fraction of a second can mean the difference between success or failure. Besides aerodynamics and engine power, weight is of huge importance, hence teams continuously research new innovative materials that promise to provide precious weight savings. In this instance, the AMF1 Team has brought its incredible understanding of lightweight, materials to the world of Haute Horlogerie.

The new Laureato Absolute Chronograph AM F1 Edition features a cutting-edge 44mm case. Its composition blends titanium powder and carbon elements taken from two F1 race cars used during the 2021 season, representing a first in the watch industry. Using a high-tech manufacturing process, the individual components are brought together and mixed with a tinted resin. The resultant material proffers superior ductility to that of steel. Each watch will have its own visual identity and will look uniquely different from any other timepiece on the market.

Patrick Pruniaux, Girard-Perregaux’s Chief Executive Officer, remarked: “From the outset, working with Aston Martin has been a joy. It has not just been a case of putting our name on a Formula One™ car. On the contrary, we have collaborated on various projects, resulting in the production of two very different watches. Working together has led to some innovative and interesting ideas, culminating in the creation of new exciting products. It has also led to some wonderful friendships forming between both companies’ personnel. With our previous collaborative models, the emphasis was on style and elegance. However, with this latest watch we sought to work closely with the F1 side of the brand, focusing more on the idea of performance.” 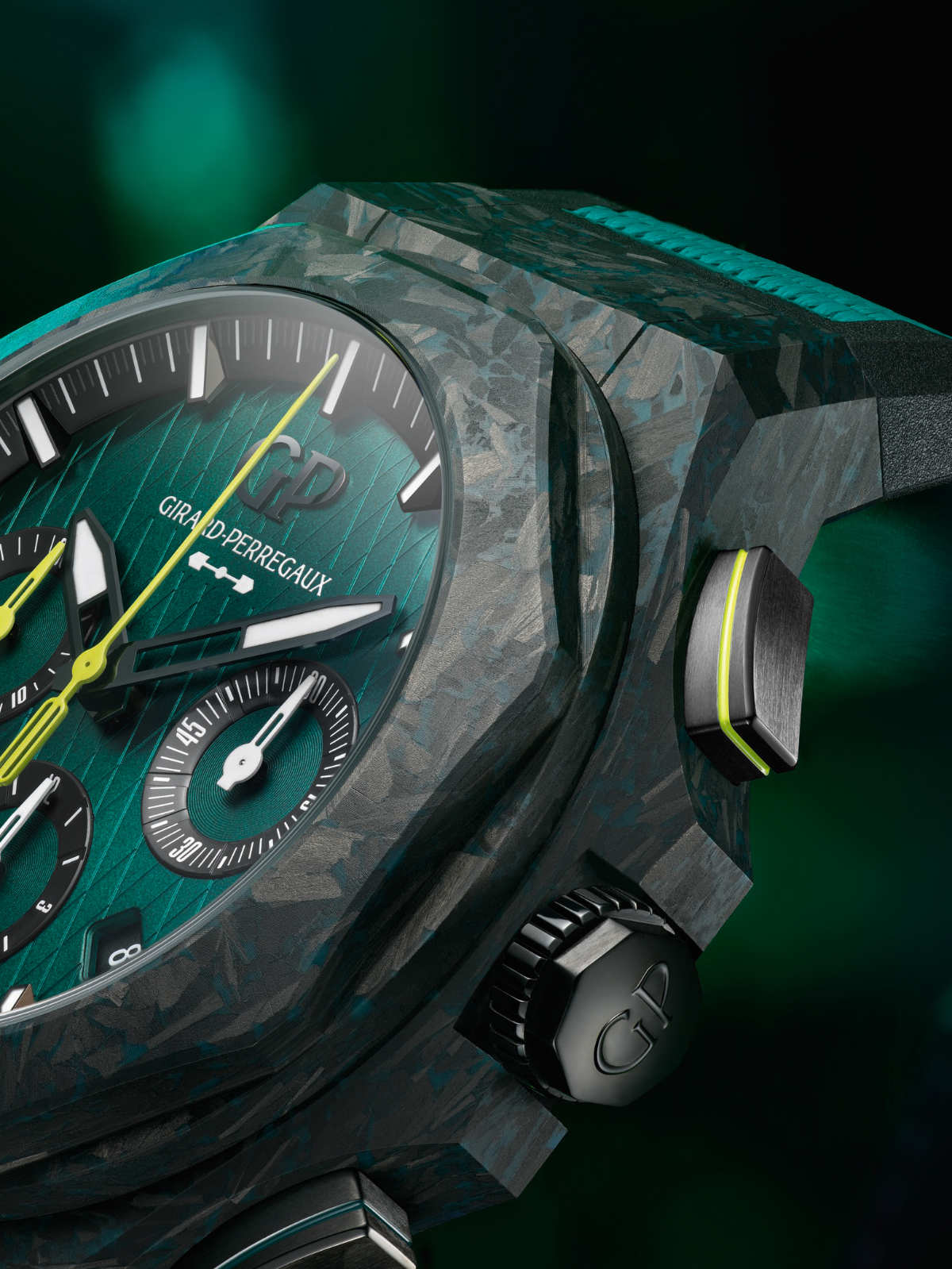 Mike Krack, Team Principal of Aston Martin Aramco Cognizant Formula One™ Team, added: “As a team, we have the determination to succeed – and that ambition requires us to analyse every element of our performance package. That includes managing the materials we use to build our cars, measuring their weight, their strength, all in a bid to find that critical extra thousandth of a second in lap-time. Girard-Perregaux is a valued partner to our organisation, and we have worked together to share and combine our knowledge to improve each other’s brands. The new Laureato Absolute Chronograph AMF1 is the first example of this collaboration, and a stunning example of the work we can achieve together.”

The Girard-Perregaux Laureato Absolute Chronograph AM F1 Edition is housed in a 44mm highly innovative titanium and carbon case, an industry first. However, the Manufacture’s inventiveness also extends to this model’s strap, a further ‘world premiere’. The GP Rubber Alloy, presented in Aston Martin Racing Green, is made of FKM rubber (FKM) and carbon elements taken from two Formula One™ race cars used during the 2021 season. The process for creating this pioneering composition is highly technical and requires specialised equipment. Moreover, making such a technical strap necessitates extensive research into the compatibility of the materials used. The resultant strap proffers superior suppleness and resistance when contrasted with conventional rubber. In this instance, its appearance is enriched with a fabric-effect façade. The buckle, with its micro adjustment system, allows the wearer to fine-tune the union between the strap and their wrist. 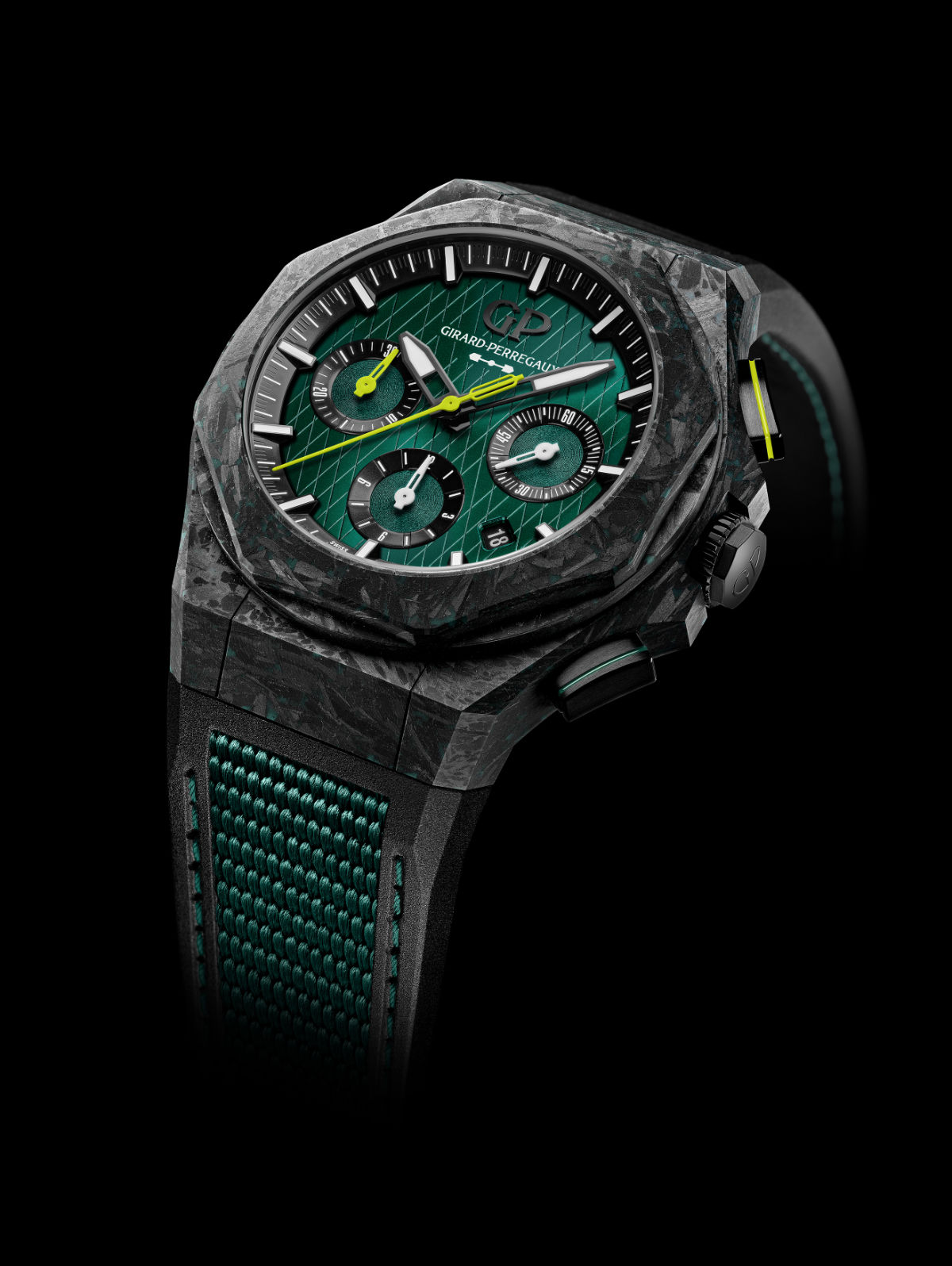 Aston Martin has always been a byword for style and performance

Having been born on a racetrack 109 years ago, Aston Martin has always enjoyed a proud association with racing.

Over the years, it has participated in various forms of international competition, enjoying much success. However, while performance is a critical part of the marque’s DNA, Aston Martin is acknowledged as an iconic global brand synonymous with style, luxury, and exclusivity.

Aston Martin fuses the latest technology, time honoured craftsmanship and beautiful styling to produce a range of critically acclaimed luxury models including the Vantage, DB11, DBS and DBX and its first hypercar, the Aston Martin Valkyrie.

This is celebrated with the new Girard-Perregaux Laureato Absolute Chronograph AMF1 Edition which incorporates several design influences from the prestigious ultra-luxury British marque’s products.
The dial on the watch is presented in sunray ‘Aston Martin Racing Green’ and is adorned with cross-hatching, a motif that can be traced back to the Aston Martin ‘AM’ badge of 1921.

Many sports cars feature hollowed-out components that provide structural rigidity while at the same time mitigating mass. Moreover, the openings seen on several Aston Martin cars facilitate cooling. This new watch features open-worked hands throughout to imbue the design with a note of sportiness. A splash of lime is used to identify the chronograph hands to echo the design of the AMF1 car. The counterweight on the central chronograph hand emulates the side strakes widely used on numerous Aston Martin road cars. While the automotive influences are clear to see, some details are very subtle and may only be spotted by devotees of Aston Martin and those in the know. 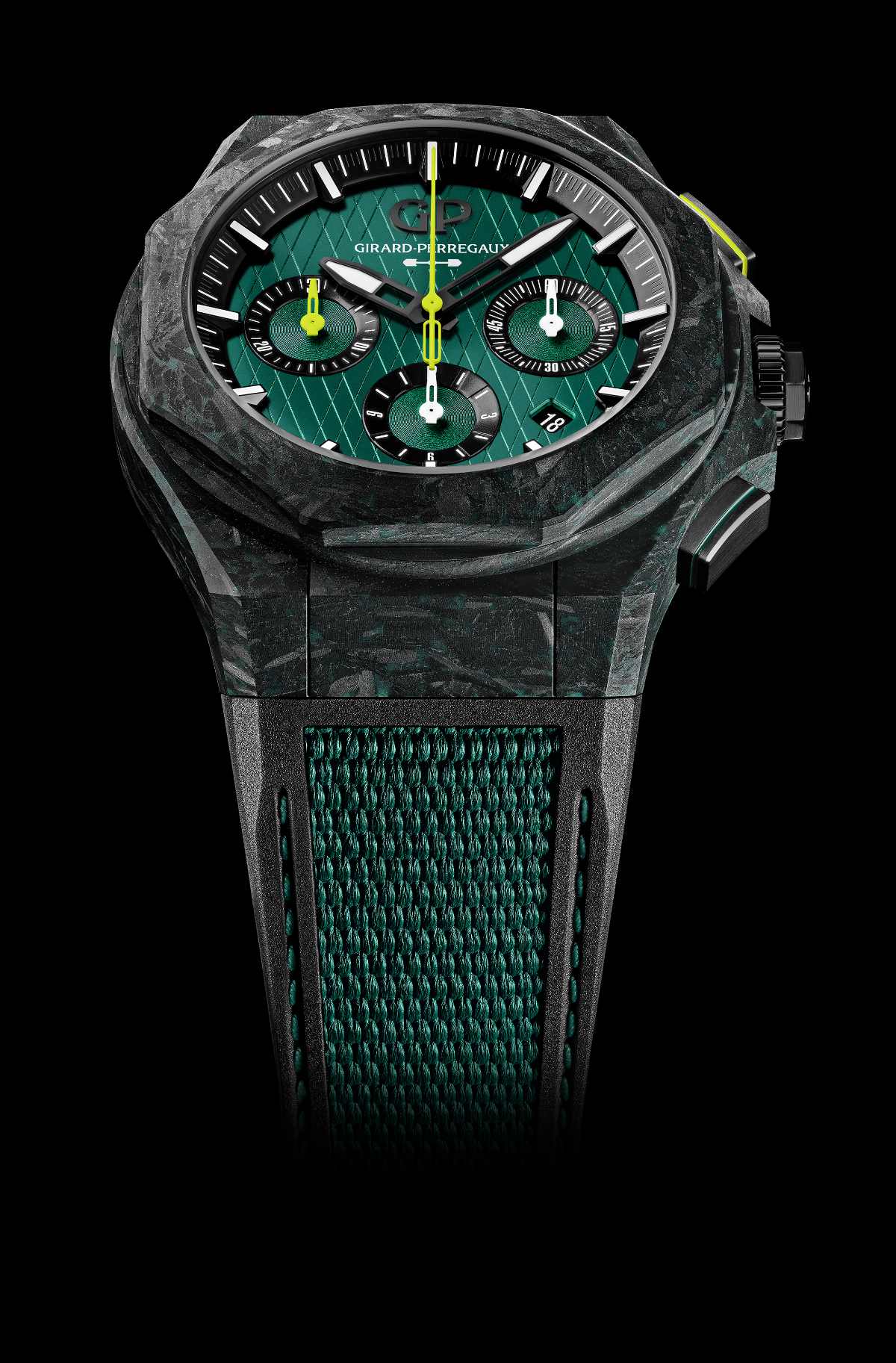 The Aston Martin Aramco Cognizant Formula One™ Team is based in Silverstone, England, close to the iconic racetrack. With this in mind, the Girard-Perregaux Laureato Absolute Chronograph AM F1 Edition is limited to 306 pieces, the total distance drivers Lance Stroll and Sebastian Vettel will aim to cover on race day (5.891km x 52 laps) at the 2022 British Grand Prix. The model is immediately available worldwide in all authorised Girard-Perregaux retailers. 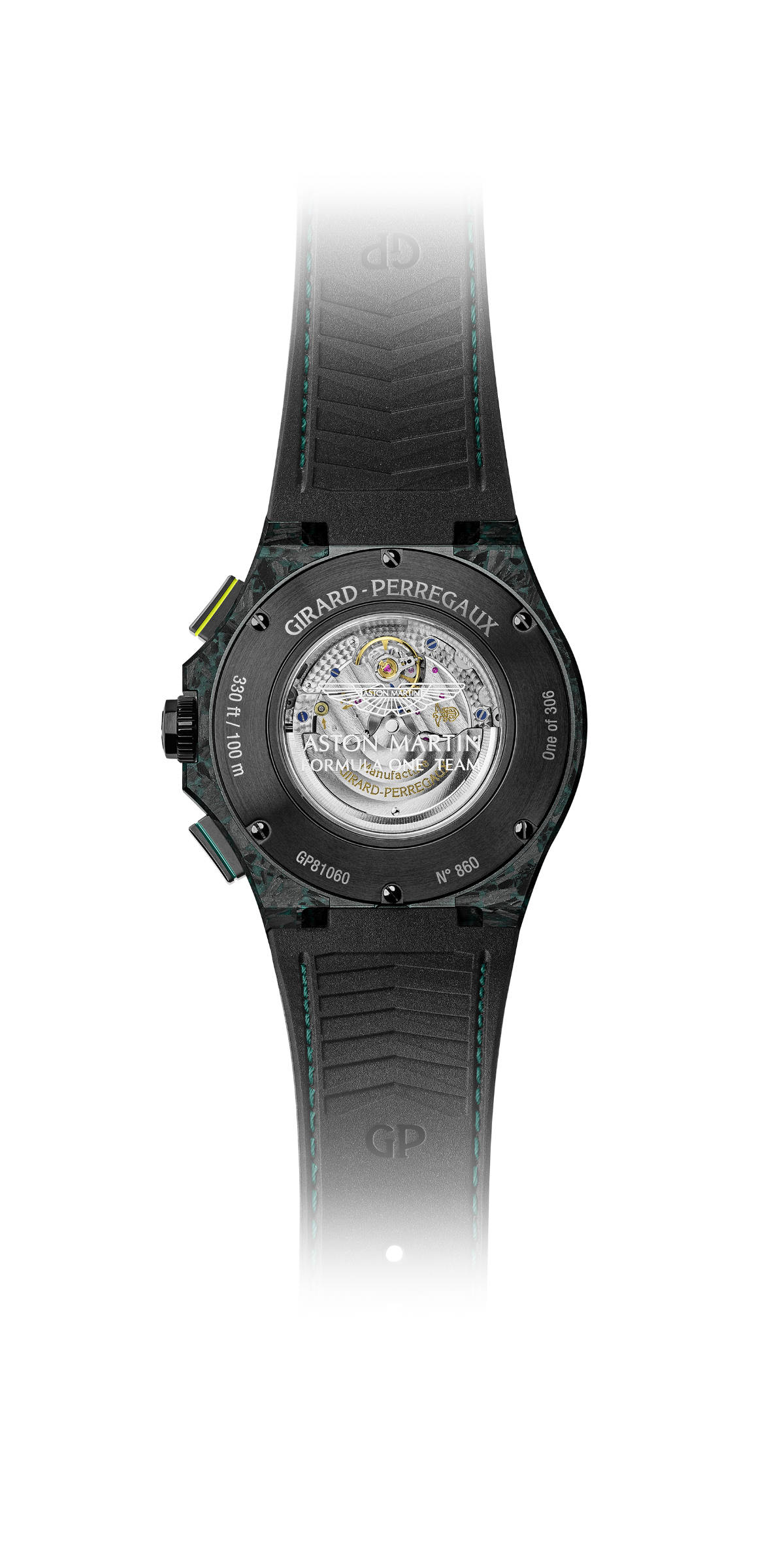 GP Rubber Alloy in Aston Martin Racing Green – a mix of rubber and carbon extracted from two Formula One™ race cars used during the 2021 season, fabric effect and green stitches

Founded in 1791, Girard-Perregaux is one of the oldest fine watchmaking manufactures still in operation and is appreciated by those in the know. Indeed, the firm’s history is dotted with exceptional creations that skillfully blend aesthetics and functionality. These models include the iconic Laureato, born in 1975, as well as the legendary Tourbillon ‘With Three Gold Bridges,’ a watch that made the invisible visible, transforming bridges from just a technical element to an integral part of the timepiece - a first in watchmaking. Girard-Perregaux’s place at the vanguard of horological innovation is confirmed by over one hundred recorded patents together with numerous prizes and distinctions. It remains one of the few watchmakers to retain Manufacture status for over two centuries by mastering all the required horological skills in-house and making watches infused with a notable degree of authenticity. While Girard-Perregaux respects its heritage, it continues to look ahead, embracing new technologies, state of the art materials, and fresh takes on iconic shapes.

Aston Martin’s vision is to be the world’s most desirable, ultra-luxury British brand, creating the most exquisitely addictive performance cars. Founded in 1913 by Lionel Martin and Robert Bamford, Aston Martin is acknowledged as an iconic global brand synonymous with style, luxury, performance, and exclusivity. Aston Martin fuses the latest technology, time honoured craftsmanship and beautiful styling to produce a range of critically acclaimed luxury models including the Vantage, DB11, DBS and DBX and its first hypercar, the Aston Martin Valkyrie.

Lagonda was founded in 1899 and Aston Martin in 1913. The two brands came together in 1947 when both were purchased by the late Sir David Brown, and the company is now listed on the London Stock Exchange as Aston Martin Lagonda Global Holdings plc.

2020 saw Lawrence Stroll become the company’s Executive Chairman, alongside significant new investment, a move that led to Aston Martin’s return to the pinnacle of motorsport with the Aston Martin Aramco Cognizant Formula One™ Team and commenced new era for the iconic British marque.

Aston Martin returned to Grand Prix racing in 2021 having last competed in the sport more than 60 years ago. With one of the most iconic emblems in the world emblazoned above the garages and a growing team of passionate men and women at its heart, this is a team with both a rich heritage and a fresh perspective. Alongside collaborative and strategic partners, the Silverstone-based team is bringing new energy to the sport with a determination to shake up the order and compete at the sharp end.

A growing family, where like-minded people from all walks of life are encouraged to be a part of our journey and given a platform to thrive, our mission is to use the global platform of motorsport to engage a new wave of fans – showcasing the technology and innovation which live at our core while representing the values that resonate with the changing world in which we live.