On October 5th 1962, one of cinema’s most iconic characters made his on-screen debut. Since that first instalment, the James Bond franchise has spanned an incredible 60 years. Based on the novels by Ian Fleming, the 25 action-packed films, produced by EON Productions, have laid the foundation for a global cinematic legacy.

Everybody has a favourite. But for OMEGA, there remains a particular fondness for GoldenEye in 1995, which was the first time James Bond wore an OMEGA on his wrist. This mission was the beginning of an innovative and stylish partnership that continues to this day. Just as James Bond has evolved throughout his time on screen, so too have the OMEGA watches he’s worn on his wrist.

Following Pierce Brosnan’s James Bond, it was Daniel Craig who took the role of 007 for five memorable films. The actor has been an OMEGA ambassador throughout his time in the role and has become an avid fan of the brand’s watches. Alongside him, Naomie Harris as Moneypenny (Skyfall, Spectre and No Time To Die) also joined the OMEGA family, delivering both elegance and female empowerment on and off screen.

It was Lindy Hemming, the Oscar-winning costume designer who worked on five Bond films between GoldenEye (1995) and Casino Royale (2006), who proposed that 007 should wear an OMEGA. Talking about her choice of the Seamaster, she said, “I was convinced that Commander Bond, a naval man, a diver, and a discreet gentleman of the world would wear this watch.”

Hemming was quite right in linking OMEGA with the British Royal Navy. The company has an authentic connection to the United Kingdom’s Ministry of Defence (MoD), having delivered more than 110,000 watches to pilots, navigators and soldiers during World War II.

The Seamaster 300, originally released in 1957, was issued to military divers around the world and, in 1967, a famous batch of 2nd generation Seamaster 300s was also delivered to the MoD for issue to certain units and so it is entirely plausible that Commander Bond would have been issued with an OMEGA watch.

THE WATCHES TRUSTED BY 007

From built-in lasers, to grappling hooks and bombs, there’s been no shortage of fun when it comes to James Bond’s OMEGA watches. Worn with impeccable style, these are the memorable pieces and moments that the spy and his Seamasters have shared. 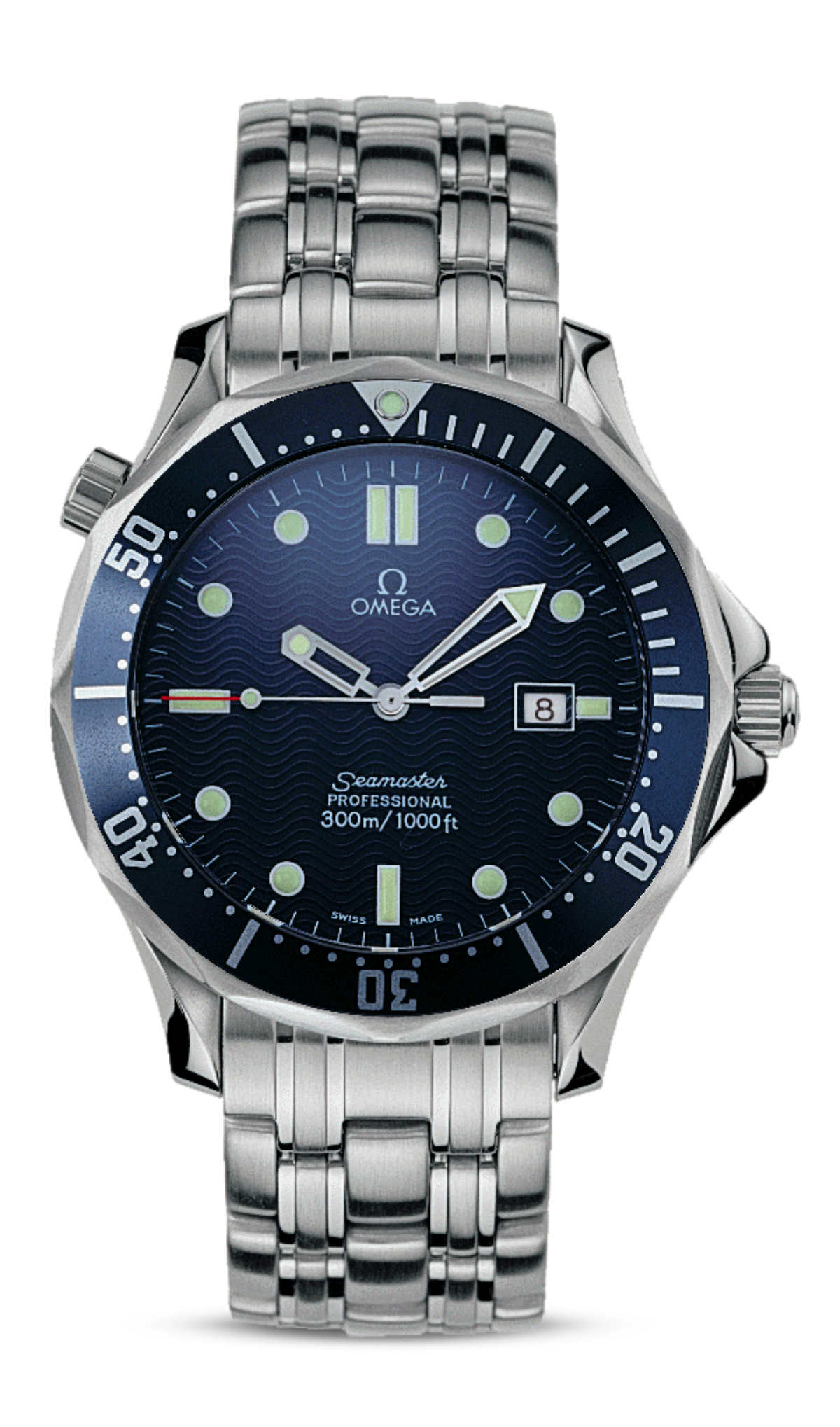 Bond uses a laser installed in his Seamaster to cut an escape hatch in the floor of Alex Trevelyan’s train. Later, in Cuba, Trevelyan confiscates the watch and uses its helium release valve to disarm two limpet mines that 007 has planted. 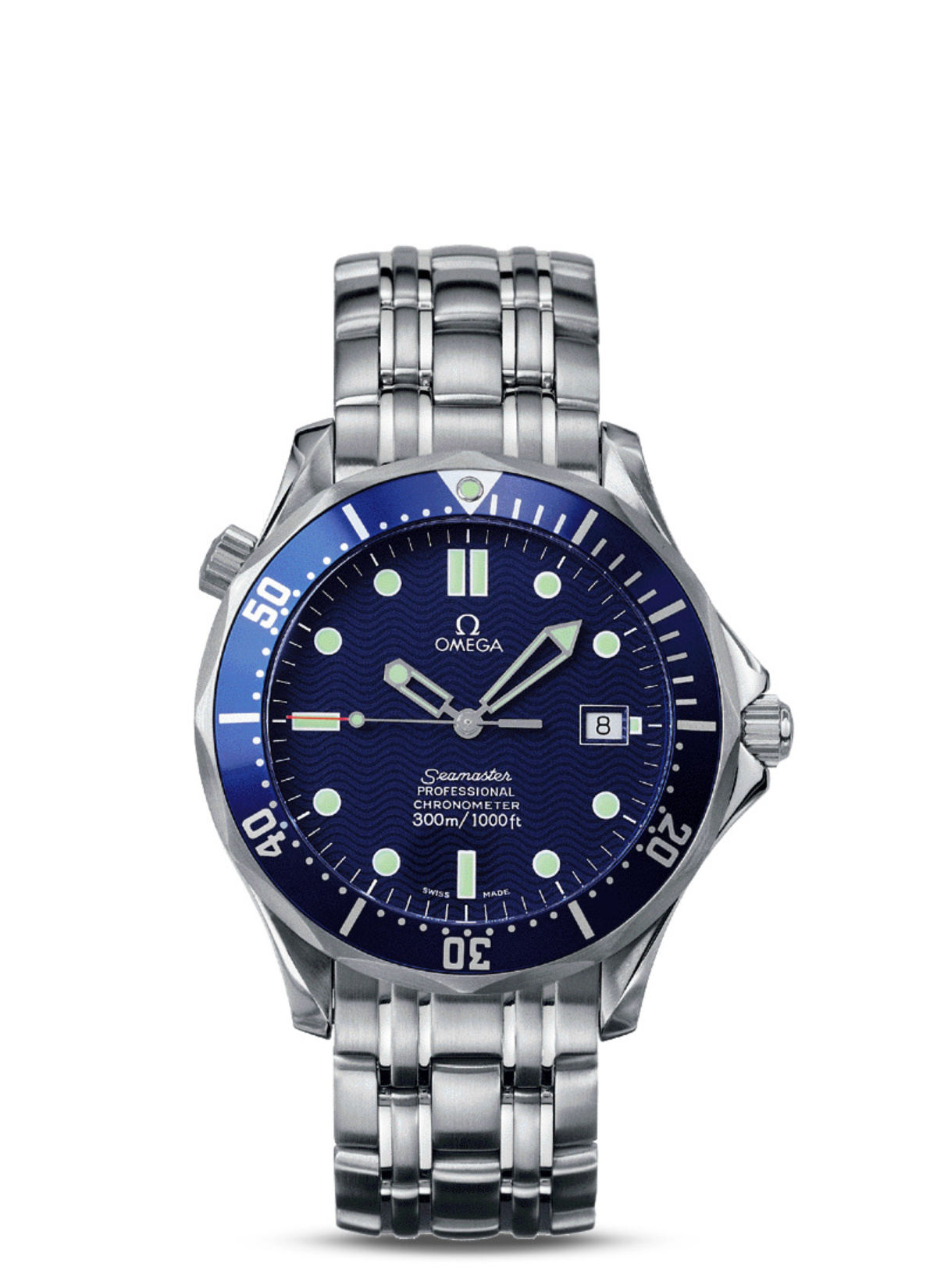 Bond wears a version of the Seamaster 300M that has been modified in agent Wai Lin’s bicycle shop, using the watch to extract the helium release valve when onboard Elliot Carver’s stealth ship. The valve forms part of a remote detonator, which 007 combines with a glass jar and a grenade to blast a hole in the ship. 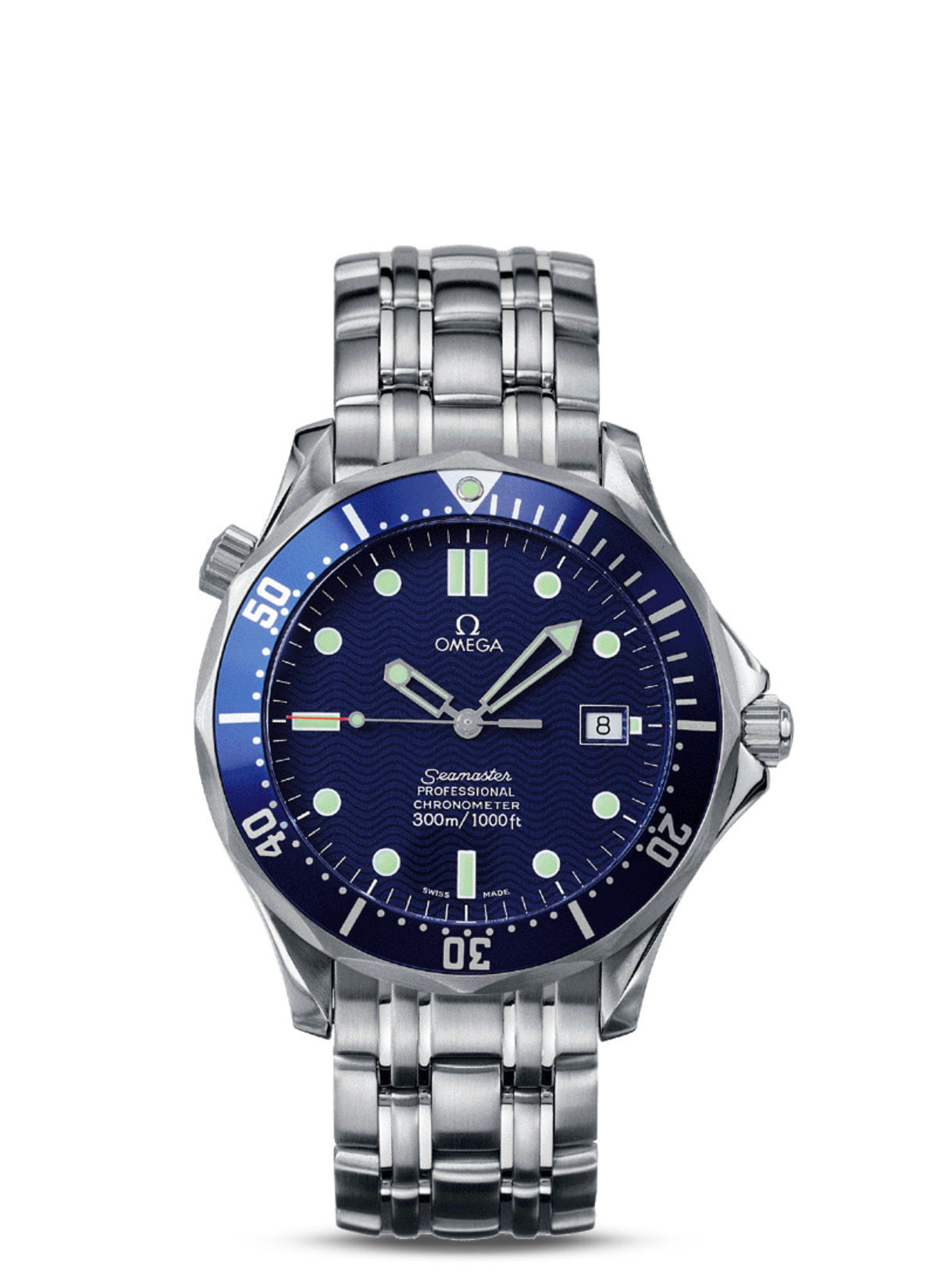 When Bond and Elektra King are buried in an avalanche, 007 activates the LEDs on his Seamaster watch face by pressing the screw-down crown, illuminating the inside of his ski jacket. Then, in a nuclear bunker, Bond fires a miniature piton with a high-tensile wire from the watch to elevate himself to a gantry. 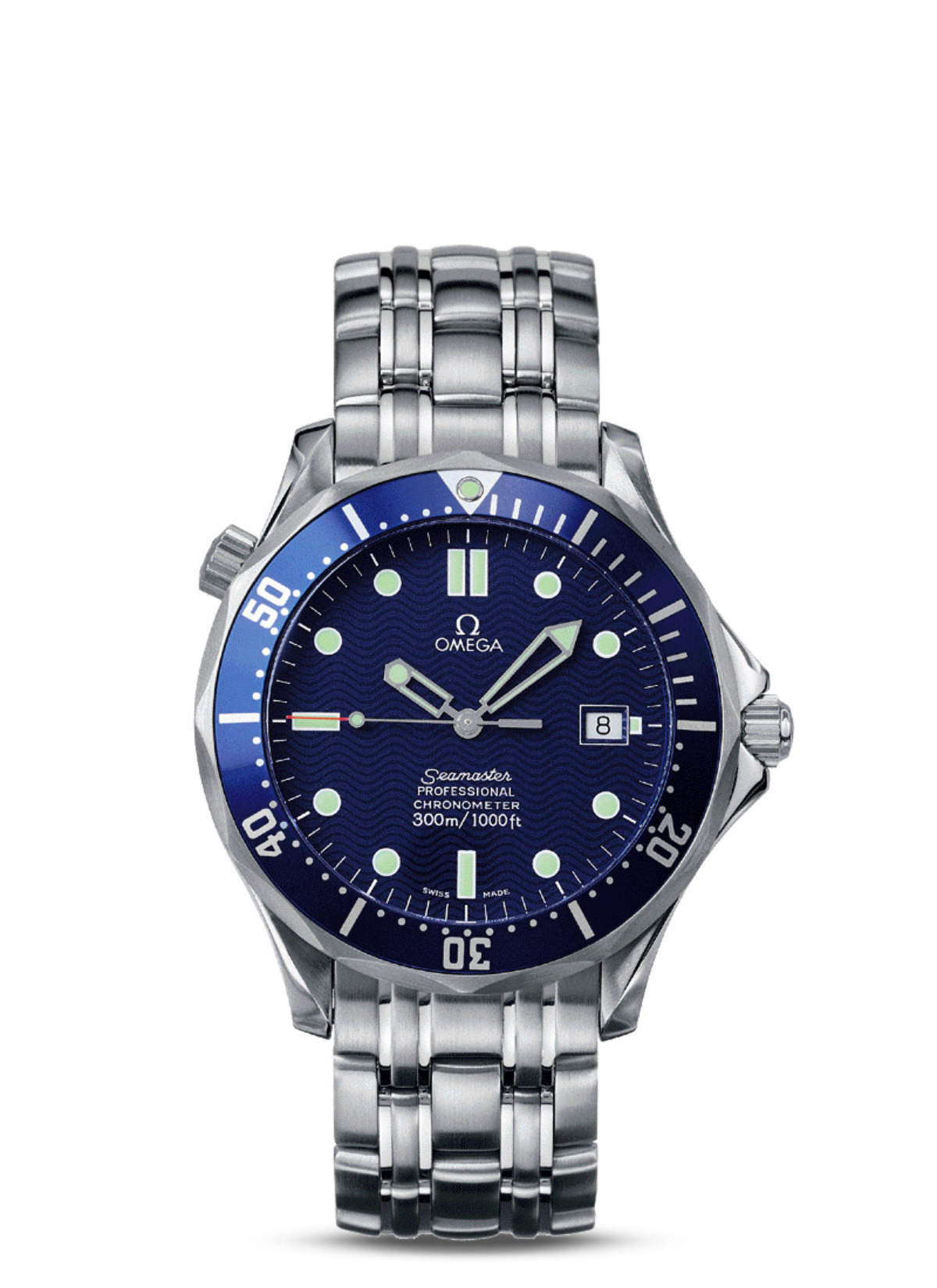 The Seamaster’s helium release valve comes into play once more when Bond again employs it as a detonator, inserting it into C4 explosive he has placed beneath the diamonds in Van Bierk’s briefcase, which he then explodes in Colonel Moon’s North Korean compound. After his release from captivity, Q furnishes 007 with a new watch fitted with a laser, which he uses to slice a hole in the ice palace when he rescues Jinx. 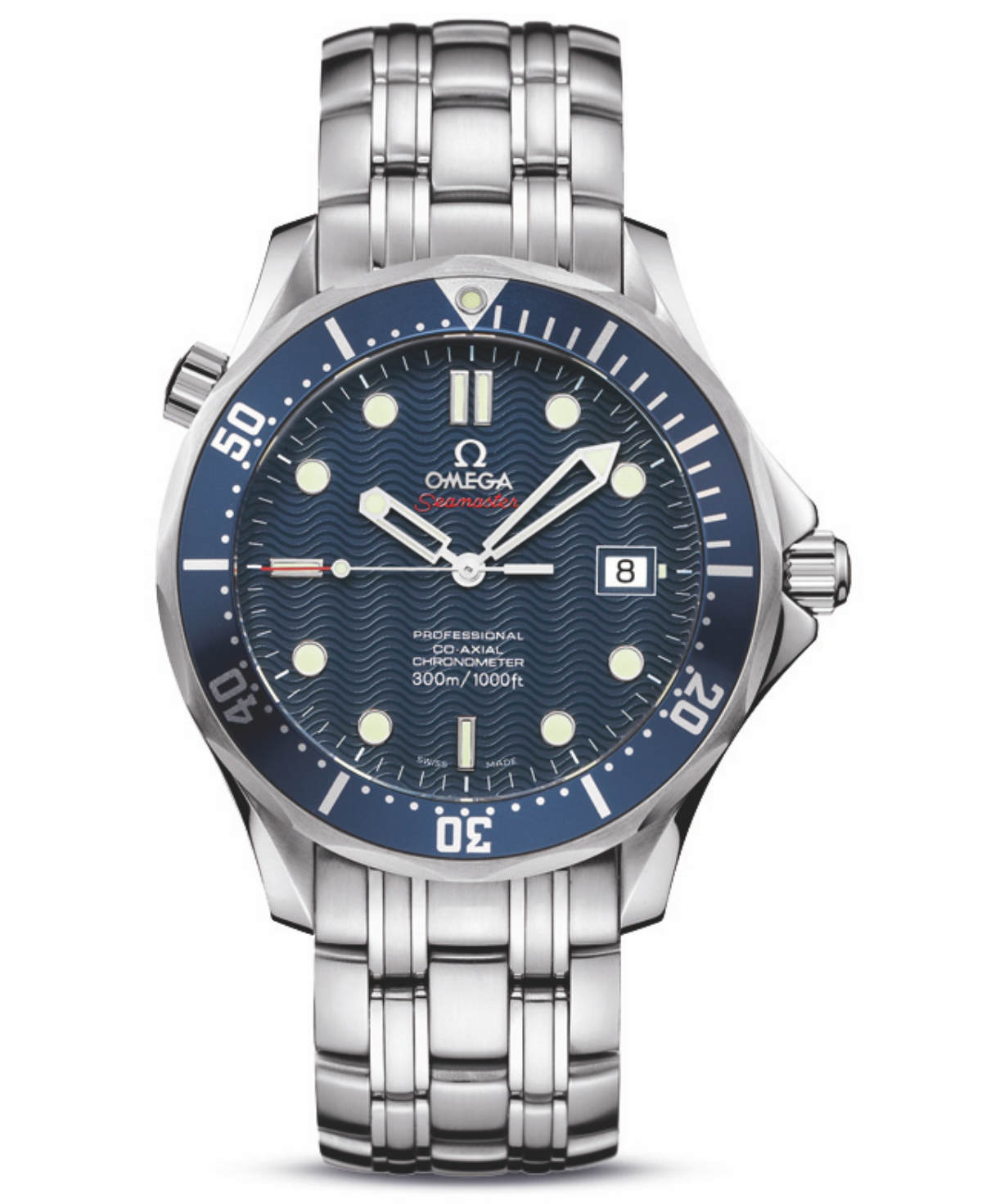 To tie in with the story of Bond becoming a 00, Bond wears two different watches. First, he sports a black Seamaster Planet Ocean 600M model. Then, once he has earned his double-0 status, he switches to the Seamaster Diver 300M. 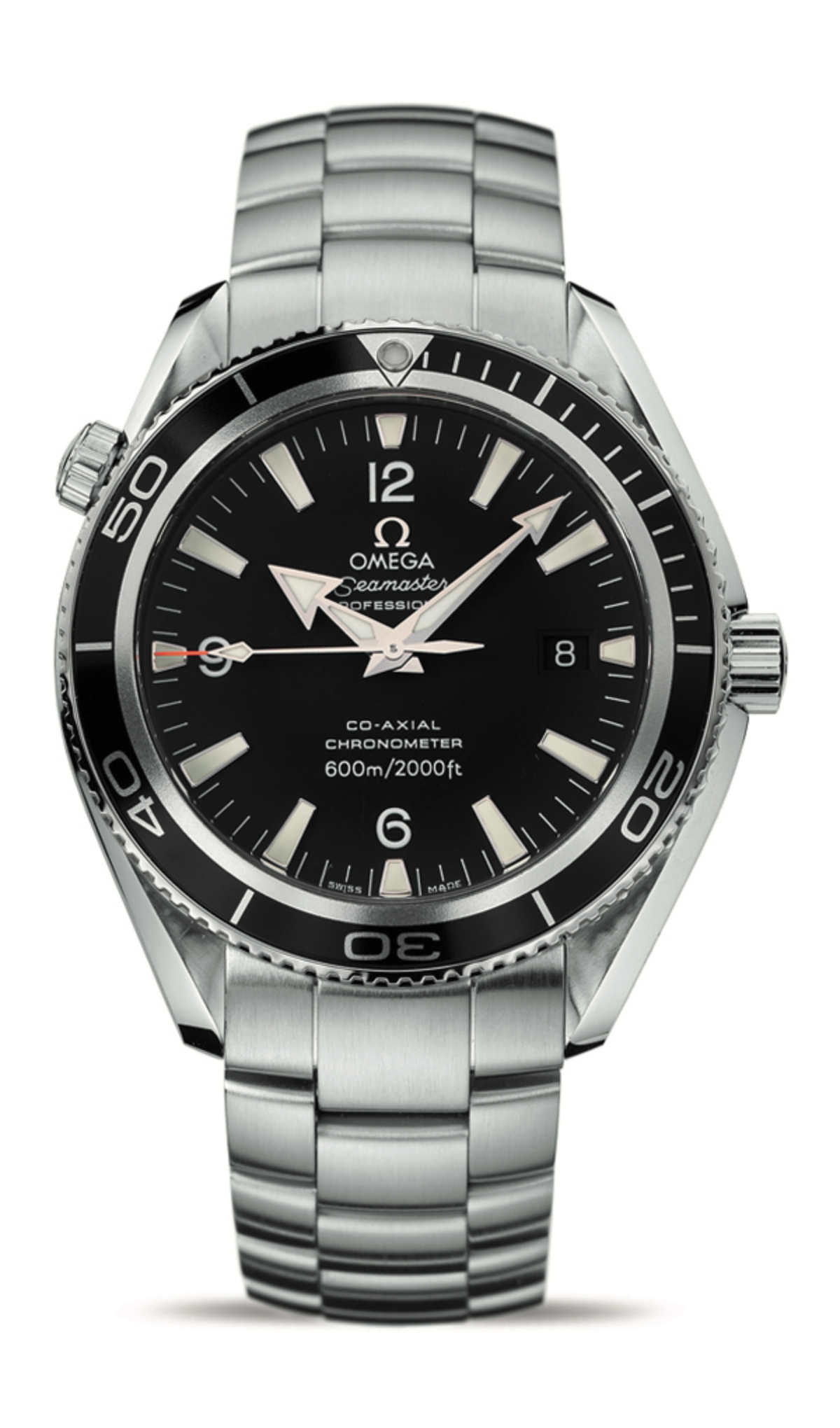 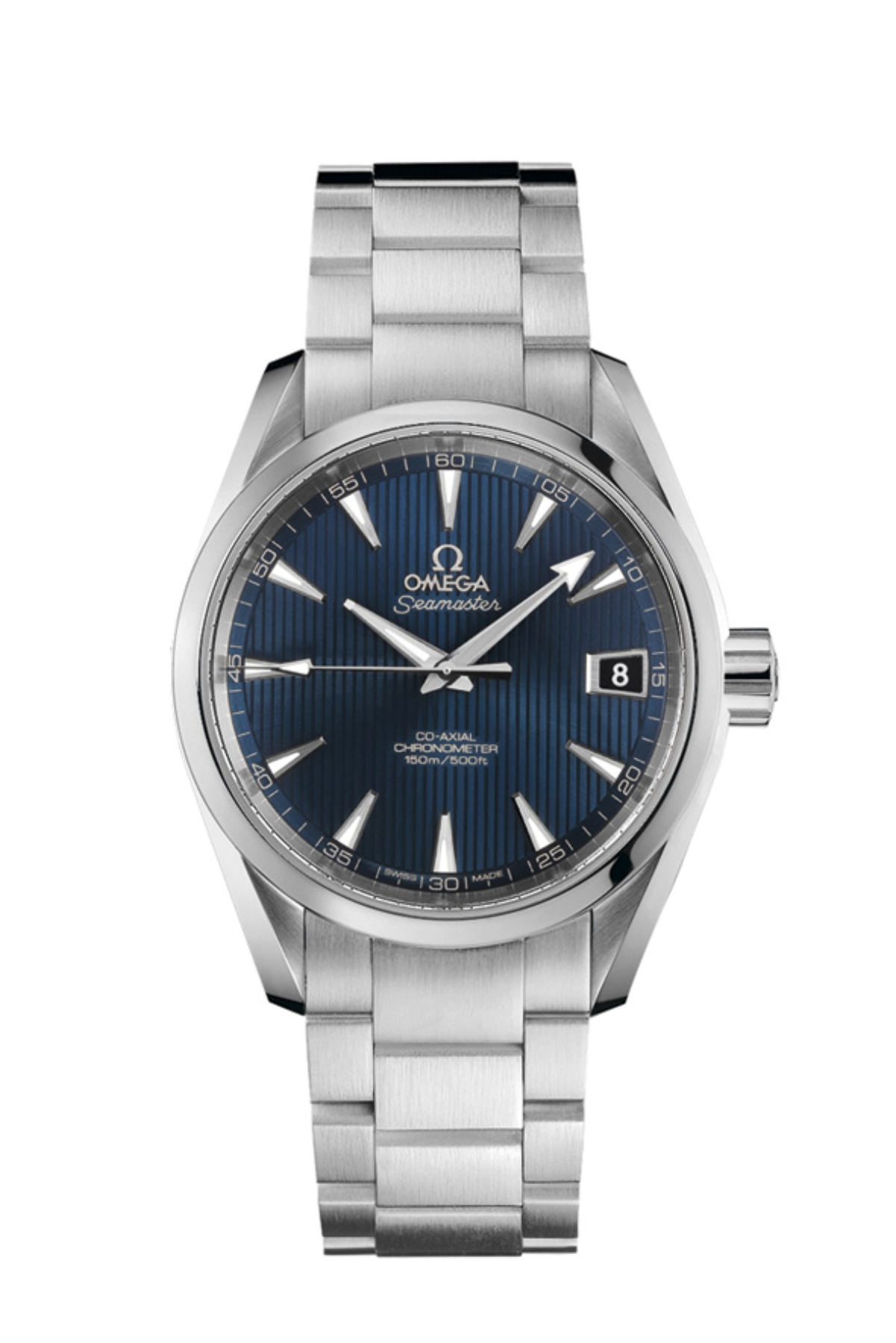 Bond again wears two different OMEGA Seamaster watches. First, he sports the 42 mm Planet Ocean 600M with a black dial and bezel when on his mission in Istanbul. Later, he dons the Aqua Terra with a blue dial. 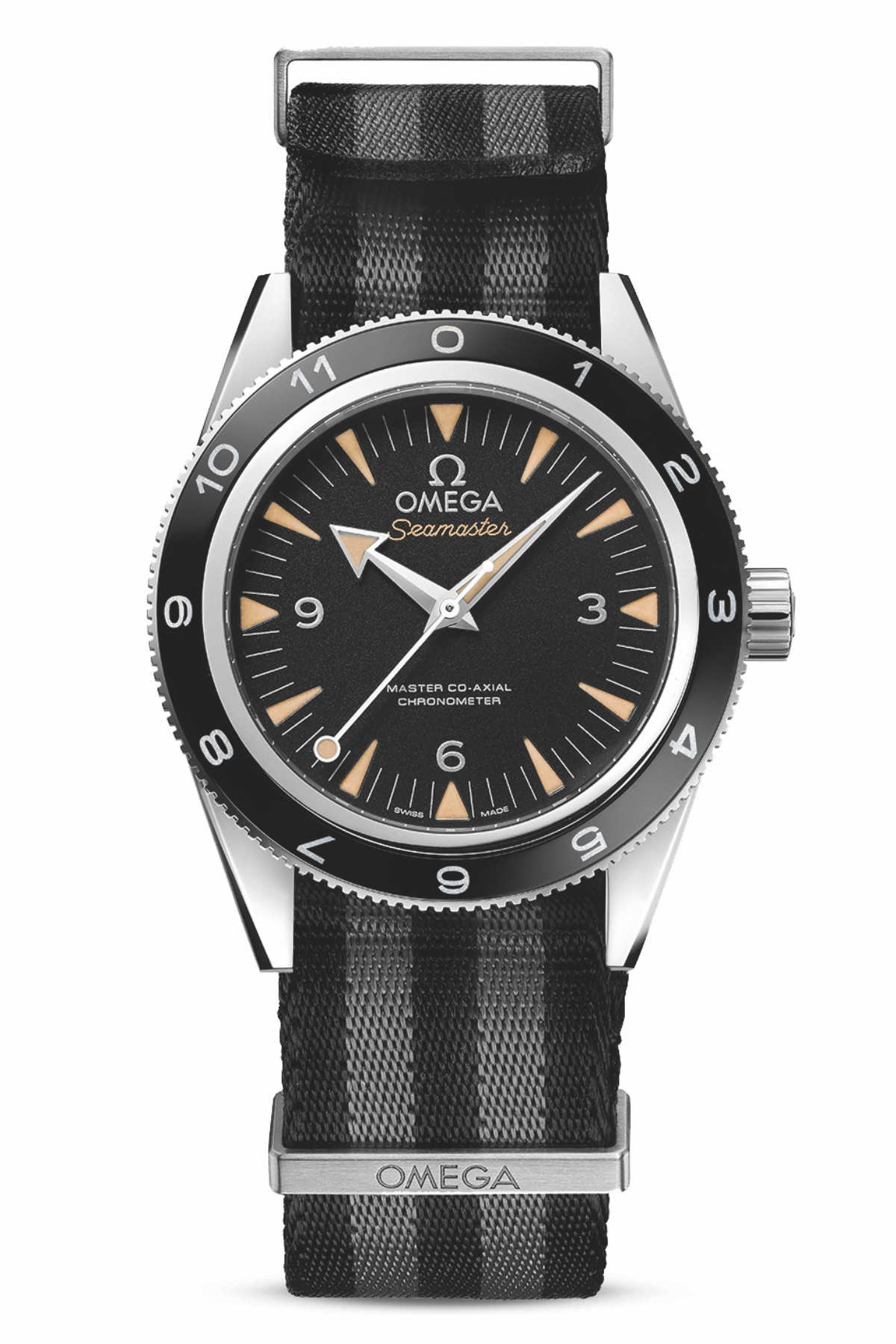 After wearing the Seamaster Aqua Terra, Bond receives his Seamaster 300 from Q when he’s told that his Aston Martin DB10 has been reassigned. It proves a vital bit of kit when 007 manages to prime the watch’s explosive device when cuffed to a chair and then slips it to Madeleine. ‘Tempus fugit,’ he says (meaning time flies), prompting her to throw the watch towards the villain just as it explodes, allowing the heroes to escape. 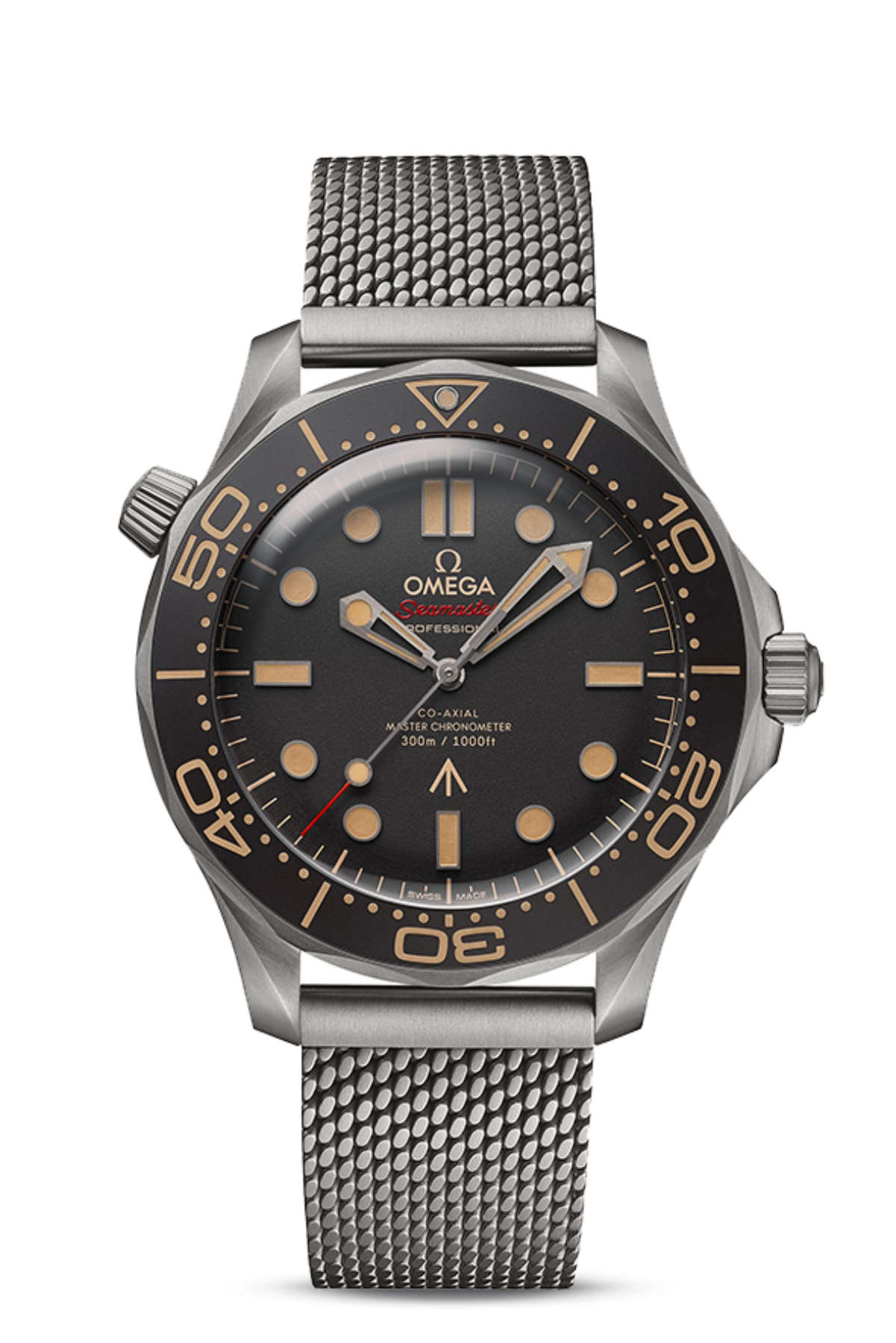 Q modifies Bond’s Seamaster Diver 300M on the flight to Safin’s lair, fitting a limited-range electromagnetic pulse device, designed to disable electronics. Bond employs the pulse first to gain entry to Safin’s base and then to dispatch Primo by targeting the henchman’s bionic eye.

Marking the 60th anniversary of the James Bond franchise, two new OMEGA watches have been crafted. Each one pays homage to the spy through innovation and impressive materials – with a touch of film magic infused within the design. 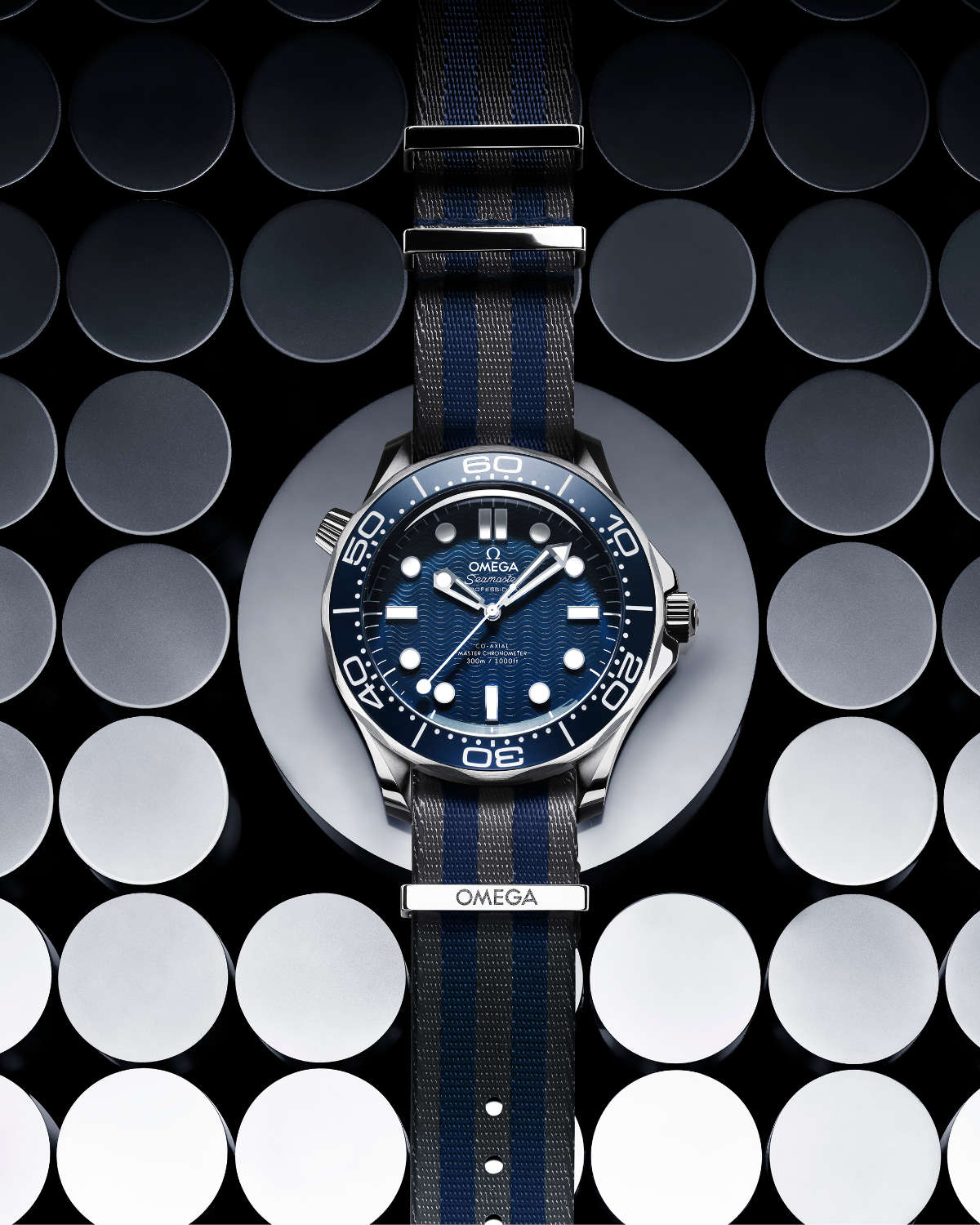 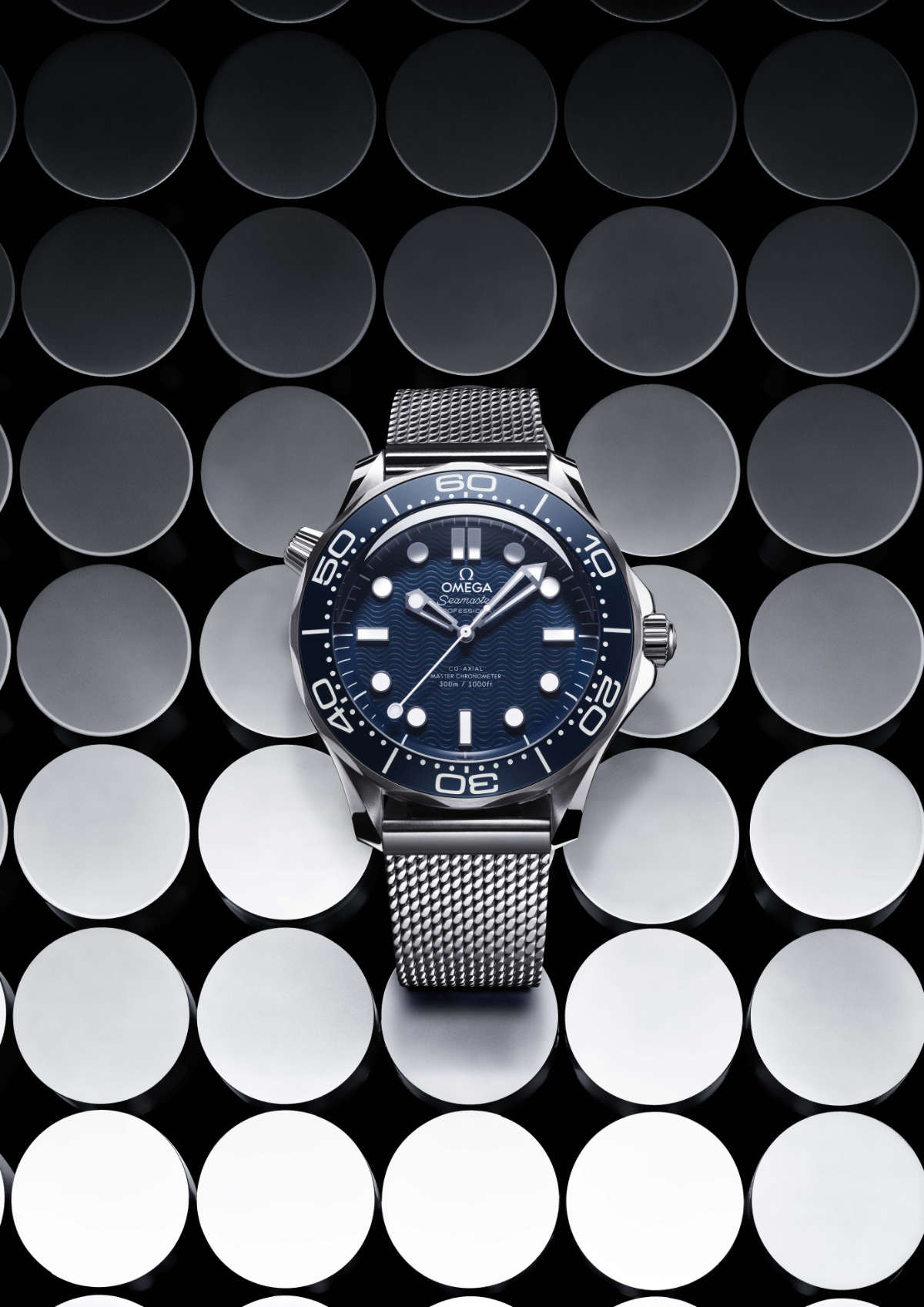 Inspired by the very same Seamaster that 007 wore in GoldenEye, this 42 mm timepiece in stainless steel creates watchmaking magic through its film-themed caseback, which replicates the famous 007 opening sequence - with Bond in silhouette and a spinning gun barrel design. This dynamic scene plays out beneath the sapphire, decorated with micro-structured metallisation. The patent pending “moiré” effect animation is linked to the running of the lollipop central seconds hand, so the action never stops. 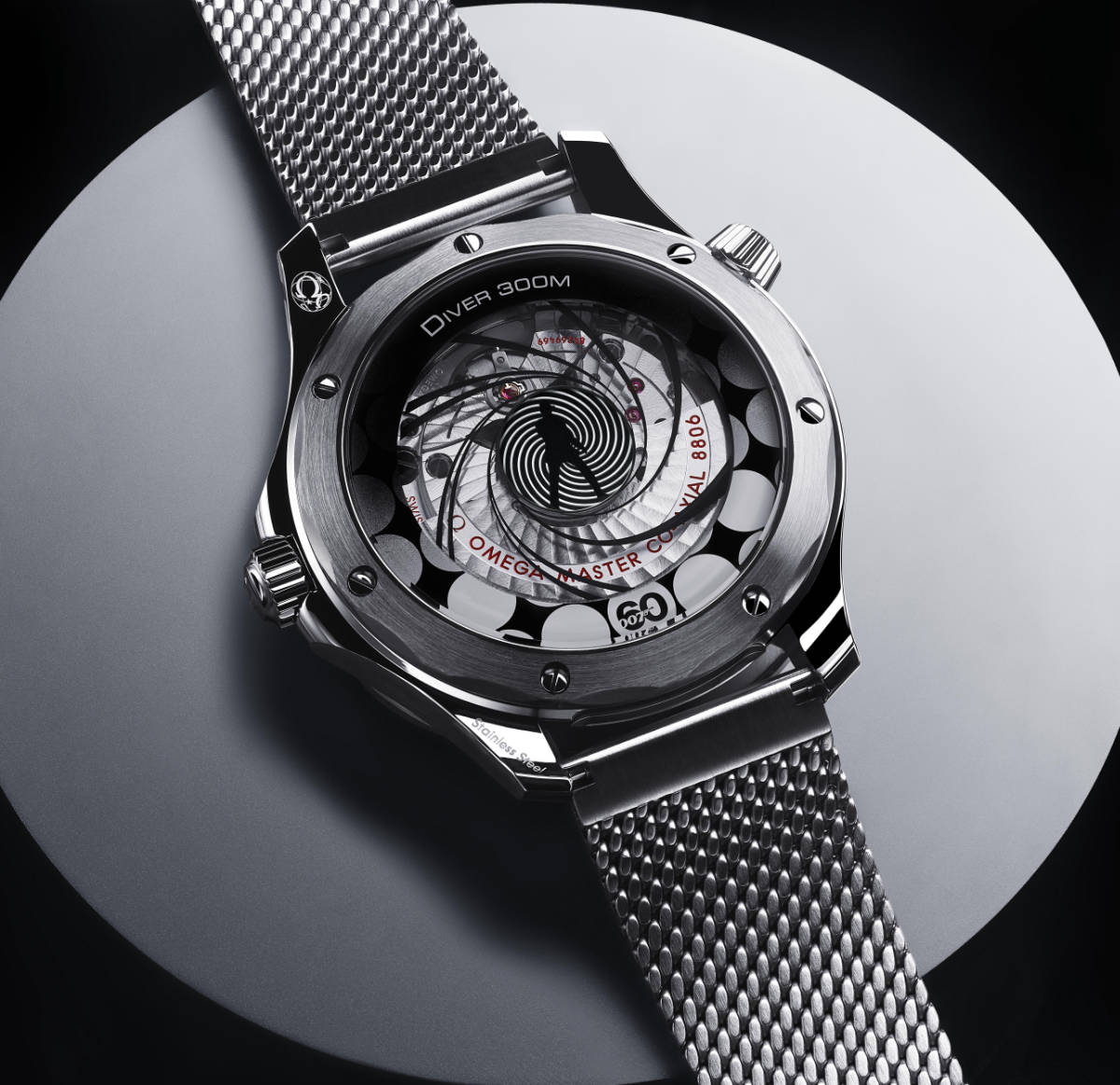 The watch is driven by a precise Co-Axial Master Chronometer Calibre 8806 and is presented on a mesh-style bracelet – in the same style as James Bond’s OMEGA watch in No Time To Die.

The bezel and dial are both made from blue oxalic anodized aluminium, with the dial featuring laser-engraved waves, and the bezel featuring a diving scale filled with white Super-LumiNova. Also spot the commemorative “60” which replaces the diving scale’s traditional inverted triangle, and luminescent green dot which links to the minute hand. 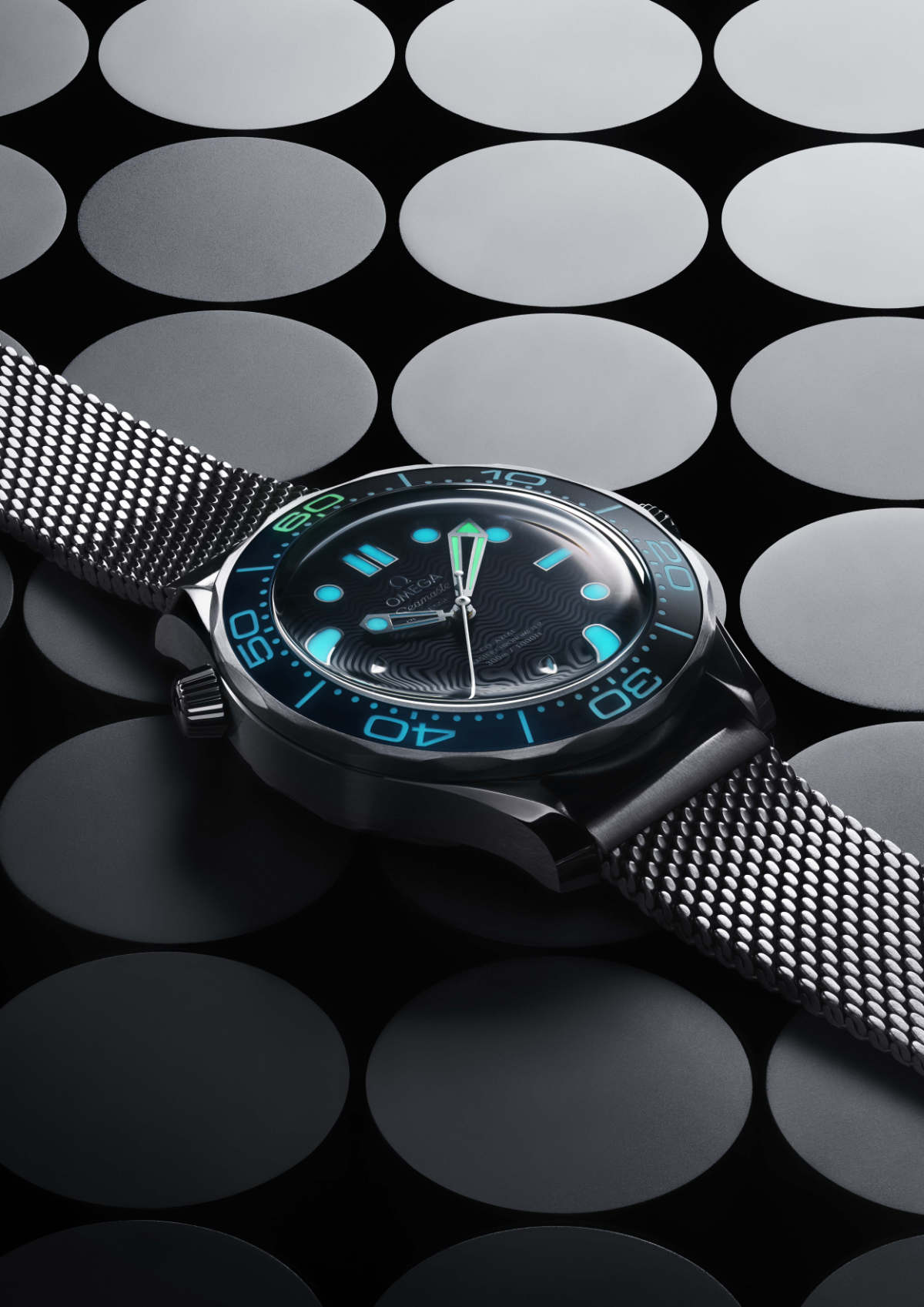 For collectors of the steel version, there’s a blue wooden presentation box in the original Diver 300M wave pattern, with three dots inspired by the classic Bond opening title sequence, including a secret push button on the right. 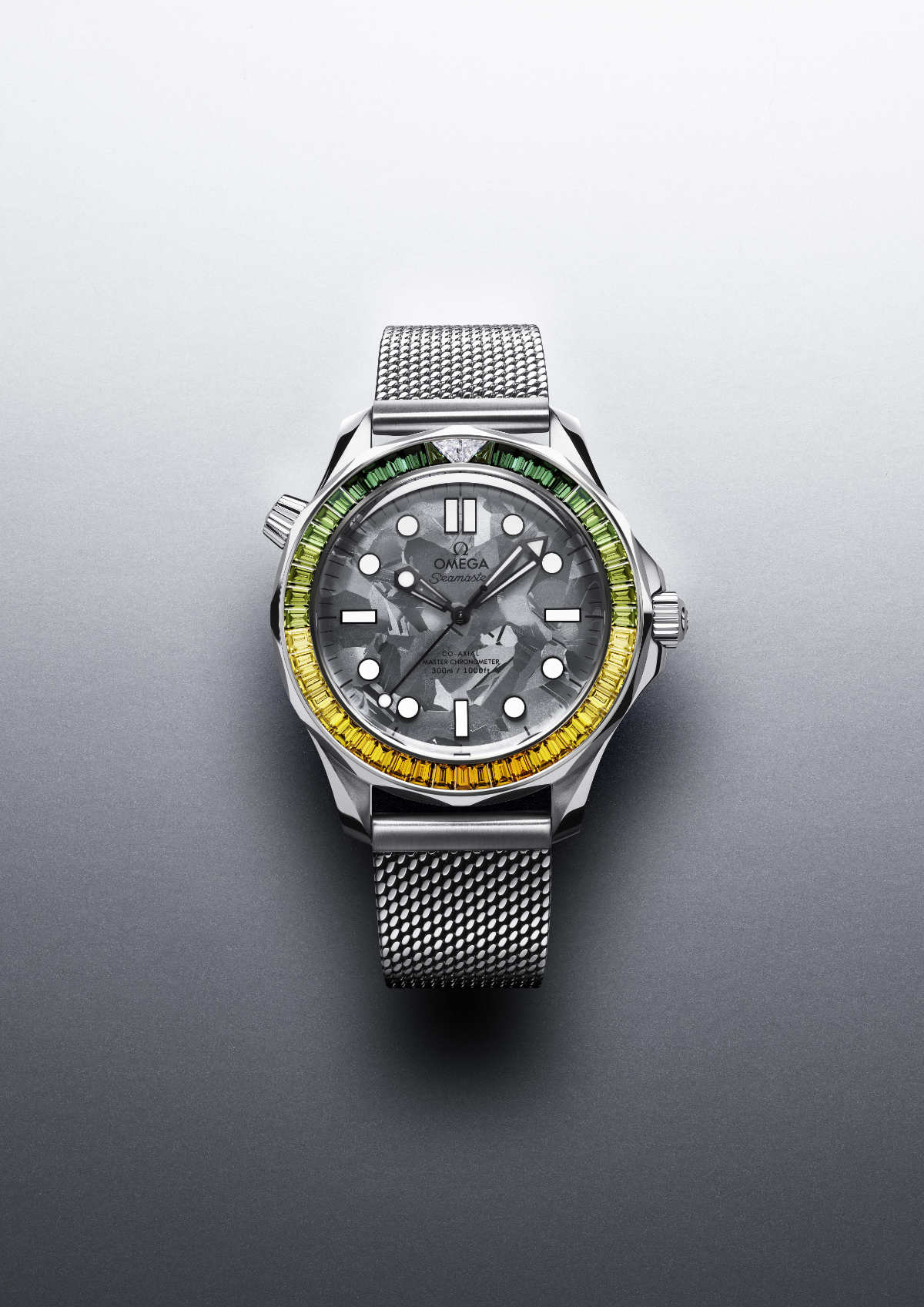 OMEGA’s own 18K Canopus Gold™ has been used to craft this special 42 mm watch. An exclusive white gold alloy known for its brilliant shine and long-lasting effect. In a nod to the beautiful sands of Ian Fleming’s Jamaican home, GoldenEye, the dial has been made from natural grey silicon. Thanks to the crystallites, the pattern on each one is totally unique, guaranteeing the wearer that no two dials are ever alike.

In tribute to the Jamaican flag, the bezel is circled with a paving of green and yellow treated natural diamonds in 10 different tropical shades, which range from extra dark forest green to cognac, passing through olive, yellow, gold and gold/cognac. Two additional clear diamonds at 12 o’clock add some vibrant sparkle to the look and make reference to the 60th anniversary. 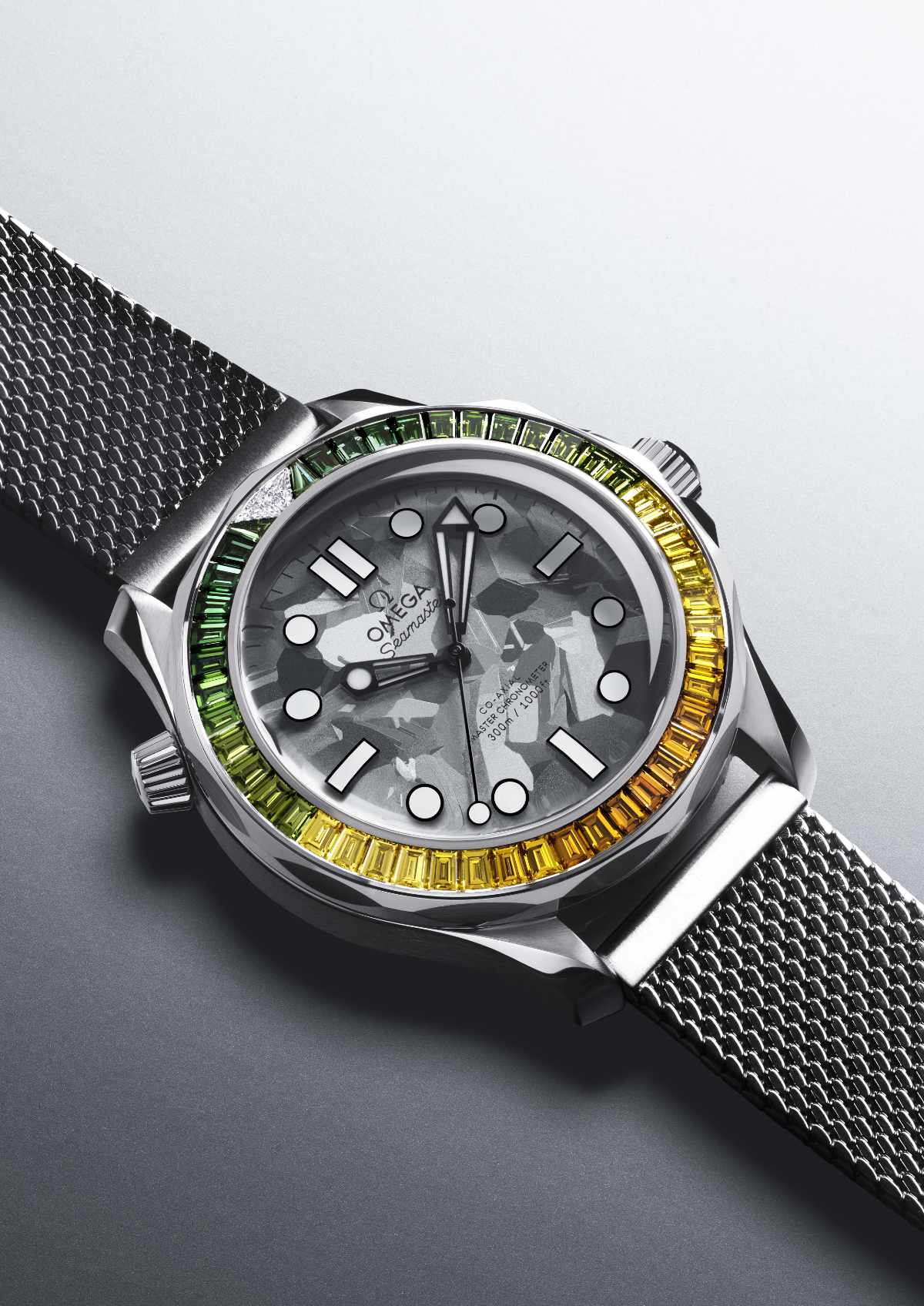 Like the steel model, the film-themed caseback replicates the famous 007 opening sequence - with Bond in silhouette and a spinning gun barrel design. As the lollipop seconds hand moves, this dynamic scene plays out beneath the sapphire, decorated with a patent pending micro-structured metallisation, known as a “moiré” effect animation.

The watch is powered by the luxury Co-Axial Master Chronometer Calibre 8807, and comes presented on a bracelet and buckle in 18K Canopus Gold™

Owners of this edition receive their watch in a mango tree box with mother-of-pearl marquetry and a 60 Years of Bond logo. The use of mango tree references a famous song from the first James Bond film, while the mother-of-pearl is a nod to the shells of Crab Key. This elegant box also includes the film-inspired dots.

If a watch just isn’t enough to celebrate your love for 007, OMEGA has a range of accessories that offer even more secret agent style. 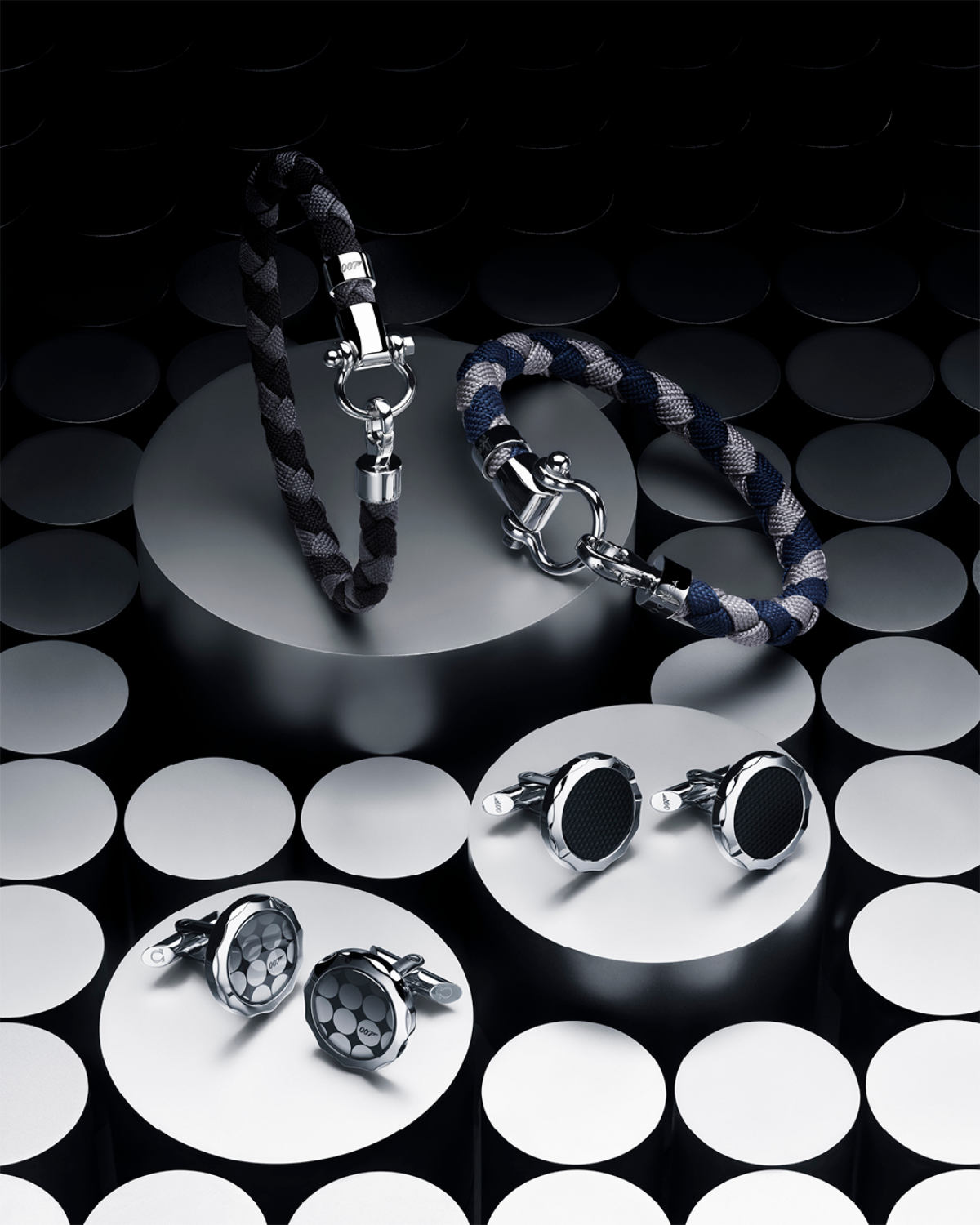 A sailing bracelet in brushed titanium, with multi-coloured nylon braiding, inspired by the NATO strap worn in No Time To Die. The designs features a moveable decorative ring with engraved 007 logo.

A sailing bracelet in stainless steel, with blue and grey nylon braiding, featuring a moveable decorative ring with engraved 007 logo.

A sailing bracelet in black and grey nylon braiding, inspired by the NATO strap worn in Spectre. Available in standard and slim-fit sizes, it includes a moveable decorative ring with engraved 007 logo. 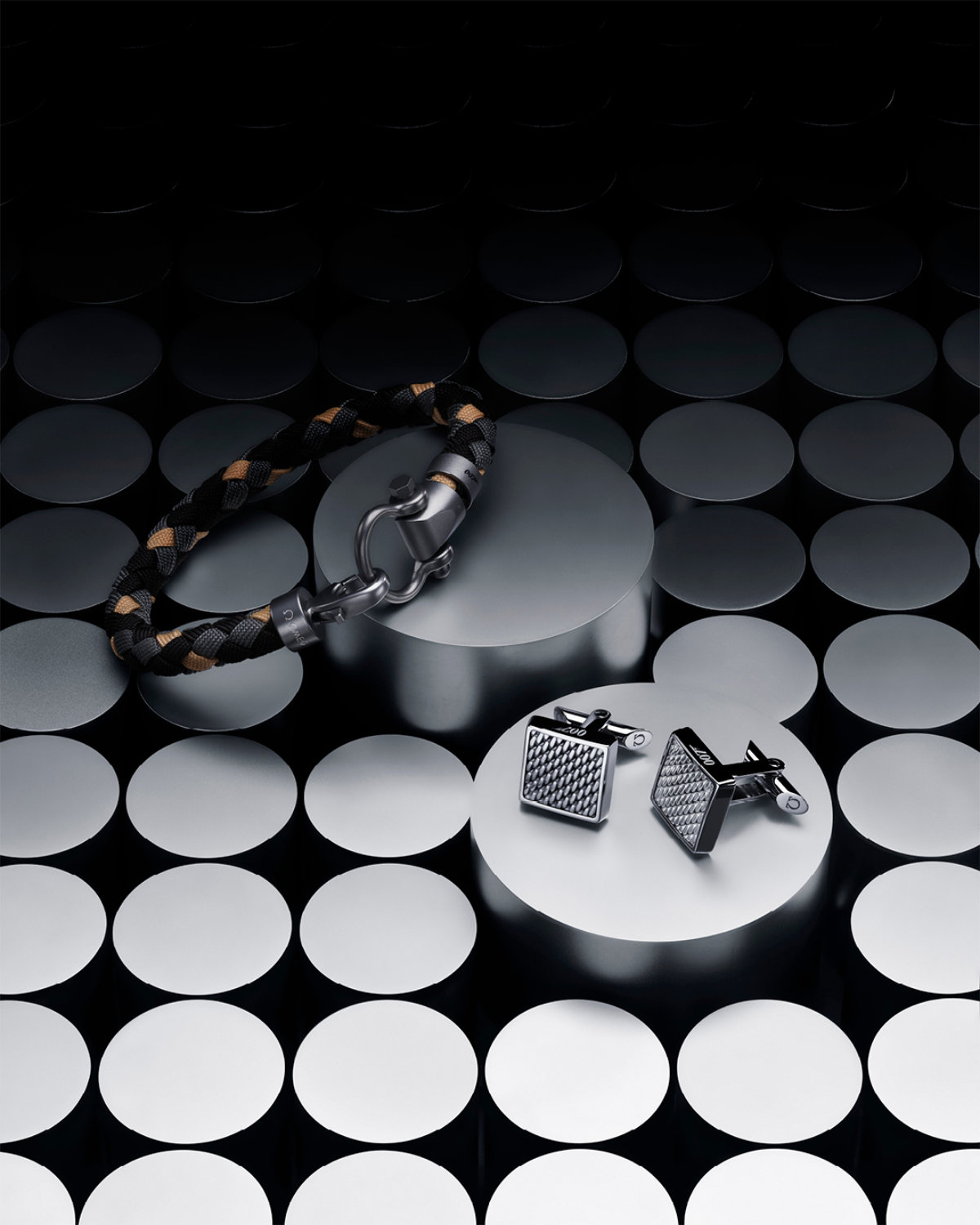 Round stainless steel cufflinks with plates inspired by Bond’s OMEGA in Quantum Of Solace. Each piece features stems engraved with the 007 logo.

Round stainless steel cufflinks. Matching the caseback of the 60th anniversary watch, the design feature dots inspired by the iconic James Bond opening sequence from 1962. The 007 logo is engraved on the toggles.