« Moon Race » is perhaps the most exciting epic of modern times.

This space race is staged through four key episodes in the conquest of the Moon. It combines the finest craftsmanship with lunar meteorite and the most spectacular natural stones. These four creations all feature an authentic fragment of the spacecraft that shaped history. Each of them has travelled more than a million kilometres in interplanetary space before being presented in the Louis Moinet travel trunk, which invites you on a journey through space.

Luna 9 was the Soviet space probe that made the first successful lunar soft landing. It was a real feat at the time, following a long series of failures. Soviet astronautics lost 26 space probes between 1962 and 1965 without a single success.

Launched on January 31st 1966 from the Baikonur Cosmodrome, Luna 9 landed in the Ocean of Storms (Oceanus Procellarum) on February 3rd 1966, giving the world the first panoramic images of the lunar surface. 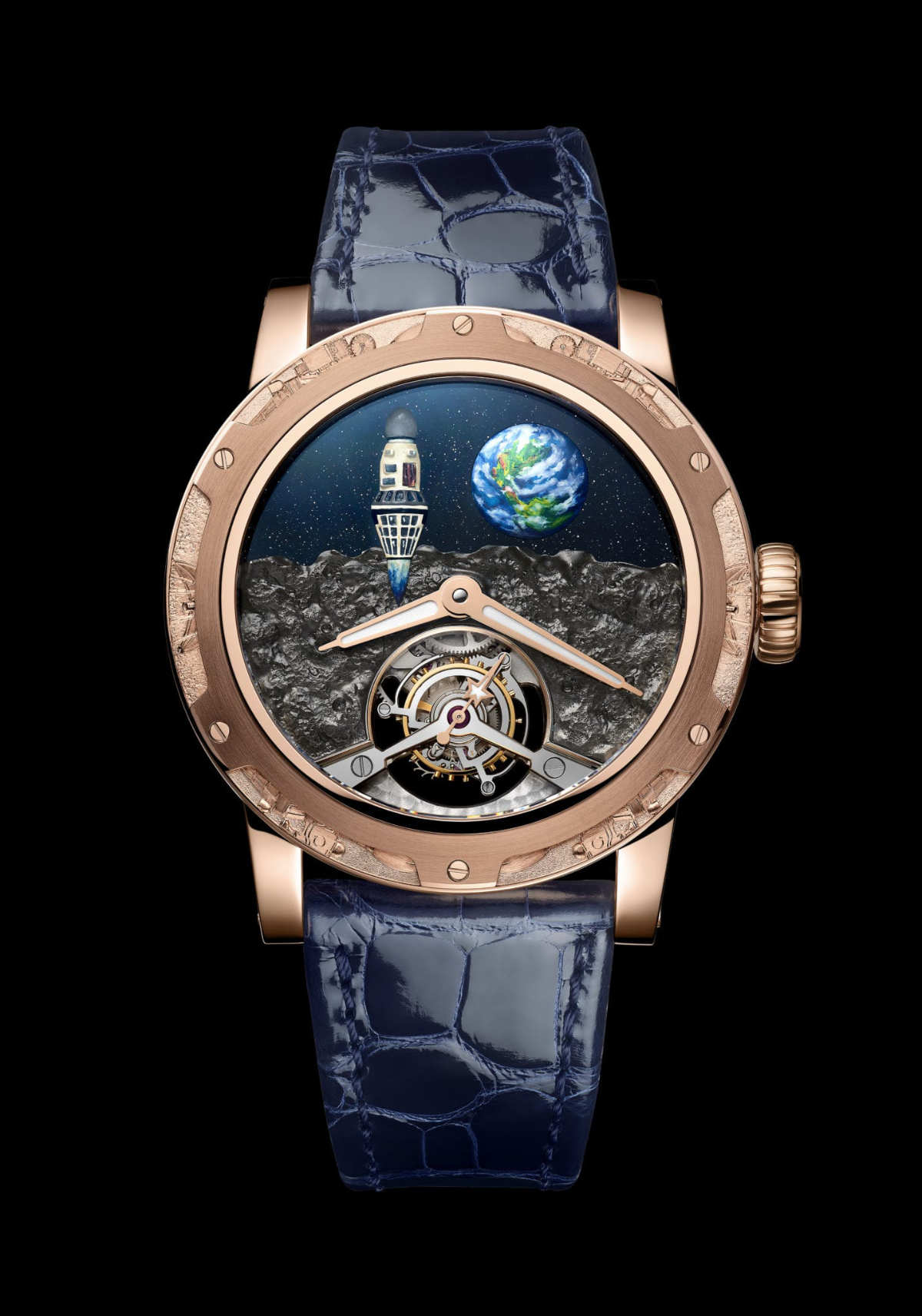 The dial depicts the soft landing of Luna 9. The spacecraft is hand-engraved and then entirely painted. It includes an original piece of woven fibre from Luna 24. This piece made the journey from the Earth to the Moon and back – over a million kilometres through interplanetary space – aboard Luna 24.

The Moon is entirely hand-engraved, then blackened in the old-fashioned way to give it an enigmatic appearance.

The sky is made of black astralite, also known as aventurine glass. This material has been preserved for more than 50 years to be used for a major artistic work. The countless sparkles of its particles resemble gold spangles, stars shining against the pure backdrop of the sky.

The Earth is depicted in a highly detailed artistic miniature painting, standing out against the sky thanks to the volume of its applique.

They represent Luna 9, as well as the lunar landing capsule. Ejected just before the lunar impact, it then separated from the rest of the spacecraft. The 100-kilogram capsule hit the lunar surface at a speed of 4 to 7 metres per second, protected by an airbag. The first images of the Moon were taken by this capsule and sent back to Earth via its antennae.

While the Russians were attempting to send a crew to the Moon, the U.S. orchestrated a succession of Apollo space missions, drawing ever closer to this goal.

It was Apollo 11 that enabled humankind to set foot on the Moon for the first time. The giant Saturn V rocket left the Kennedy Space Center on July 16th 1969, and the crew landed on the night star on July 21st 1969.

The first steps on the Moon were filmed by a video camera and broadcast live, an event watched by hundreds of millions of people around the world. 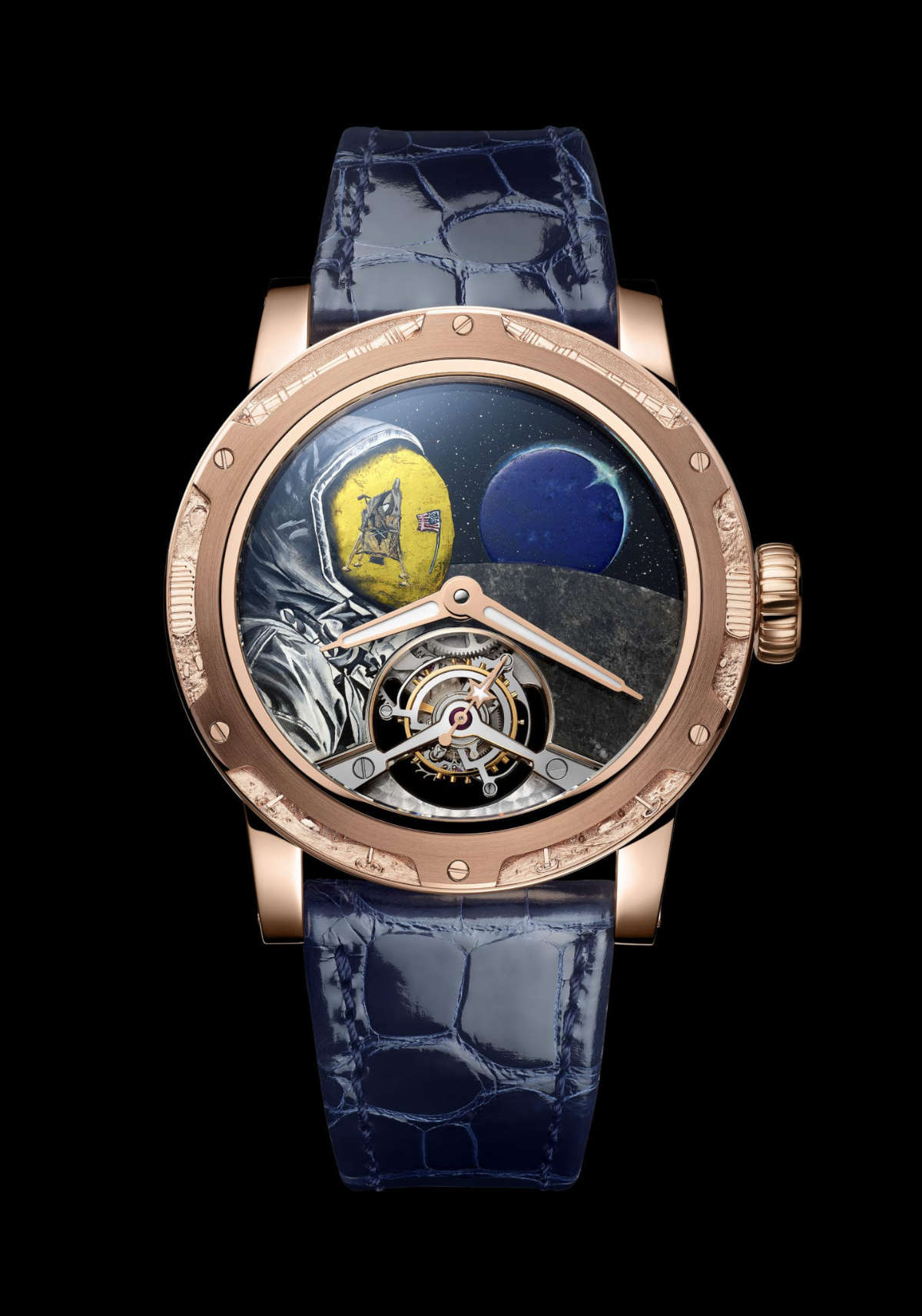 "Man on the Moon" represents the modern-day Christopher Columbus, the first man to walk on the Moon! His astronaut's suit is hand-engraved and coloured using a miniature painting technique. His visor is an authentic fragment of the polyimide film that protected his spacecraft across a wide temperature range (-250°C to 400°C). This material was used to travel from the Earth to the Moon and back – more than a million kilometres in interplanetary space – on Apollo 11.

The miniature painting on this visor represents the reflection of the lunar module. In order to achieve the finest details, the painter trims the hairs of their brush one by one, using only the last one to create the finest decorations.

The Moon is represented by a real lunar meteorite, named Dar Al Gani 400.

This lunar anorthosite is a rock found on Earth in 1998 and ejected from the Moon following the impact of a celestial object.

The curved Earth is embodied by that "azure stone" used for 7,000 years by the greatest civilisations: lapis lazuli. It floats in a sky of exceptional quality crafted from black aventurine.

They represent the Saturn V rocket, the famous space launcher developed in the 1960s for the Apollo moon programme. This huge rocket was over 100 metres high, weighed 3,000 tonnes, had 11 engines and could launch a 45-tonne payload to the Moon.

The engravings in the centre depict man's first step on the Moon, while those at the bottom show the foot pads of the Apollo lunar module as it lands.

Apollo 13 is the third mission in the space programme to take a crew to the Moon.

When landing at the Fra Mauro crater, a site heavily impacted by asteroids, a serious accident damaged the spacecraft. The mission was abandoned, and the return journey required going around the Moon before returning to Earth.

So was Apollo 13 a success or a failure? The objective was of course not achieved, yet this highly dangerous mission can be considered as one of the most spectacular rescues ever carried out. The return to Earth was due to the unfailing will and tenacity of human beings, from the crew to the control centre in Houston. 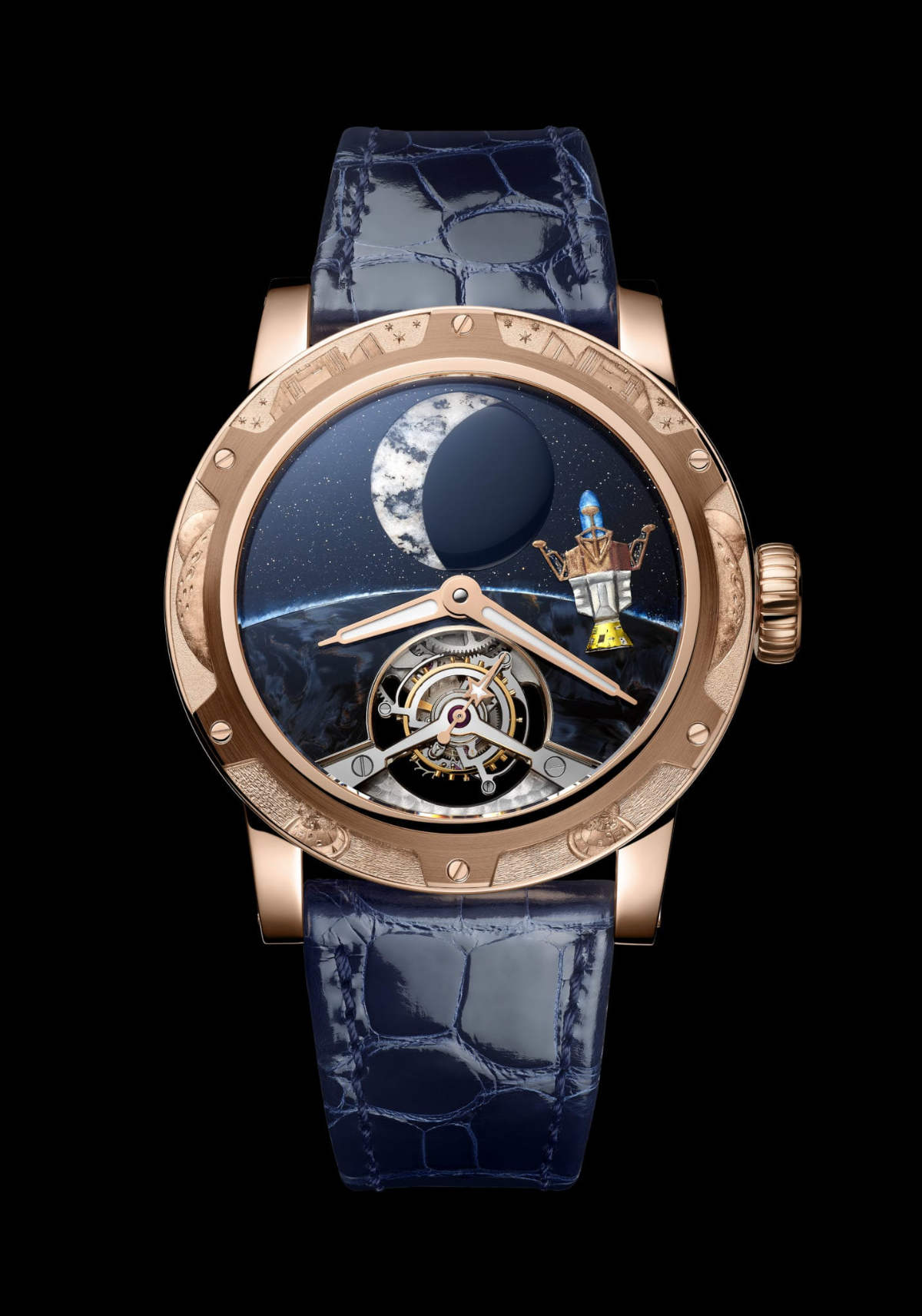 "Around the Moon" depicts the spectacular rescue of Apollo 13, which managed to reach Earth with a badly damaged spacecraft.

The spacecraft is hand-engraved and then enhanced with a fragment of the polyimide film that protected it on its return journey, particularly during its atmospheric re-entry.

This material travelled from the Earth to the orbit of the Moon and then back to Earth. In total, it travelled more than a million kilometres through interplanetary space aboard Apollo 13.

The spacecraft can be seen heading towards Earth, having circled the Moon. Onyx, a variety of agate used since antiquity for its deep black colour, embodies the mysterious face of the night star. It is set against granite from the Bernese Oberland, found by Daniel Haas at an altitude of over 2,000 metres.

The blue Pietersite from Namibia was chosen to evoke the beauty of the Earth. Its shimmering effect is due to the many multicoloured fibre inclusions that give it bluish tones with an incomparable silky appearance.

Black astralite completes the picture. This material has a history, since its origins date back to Murano at the beginning of the 17th century. It is the result of a lucky mistake – when a glassmaker dropped copper filings into molten glass that was slowly cooled – and its name comes from the Italian word "all'avventura". That is why astralite is also known as aventurine, or even river gold.

The astralite adorning the Moon Race watch was acquired and carefully preserved by the father of Daniel Haas, our partner in the field of exceptional stones. The Haas family has been a pioneer in the sourcing and cutting of natural stone dials for two generations.

They represent the Odyssey service and command module, the only one capable of returning the crew to Earth with its heat shield.

In the centre, a view of the Moon shows a distant Earth, the ultimate quest of the imperilled mission. Finally, we see the command module that landed in the Pacific Ocean.

Luna 24 is the last probe of the Luna programme to land on the Moon, in the unexplored region of Mare Crisium. It brought back 170 grams of lunar soil samples (regolith). The analysis of these samples proved to be valuable, proving the existence of water on the lunar regolith.

It was not until 32 years later that a new probe landed on the Moon (Moon Impact Probe, India). China also landed a probe (Chang'e 3), but in a controlled manner (soft landing) in 2013, subsequently bringing back samples from the Moon in 2020 (Chang'e 5). 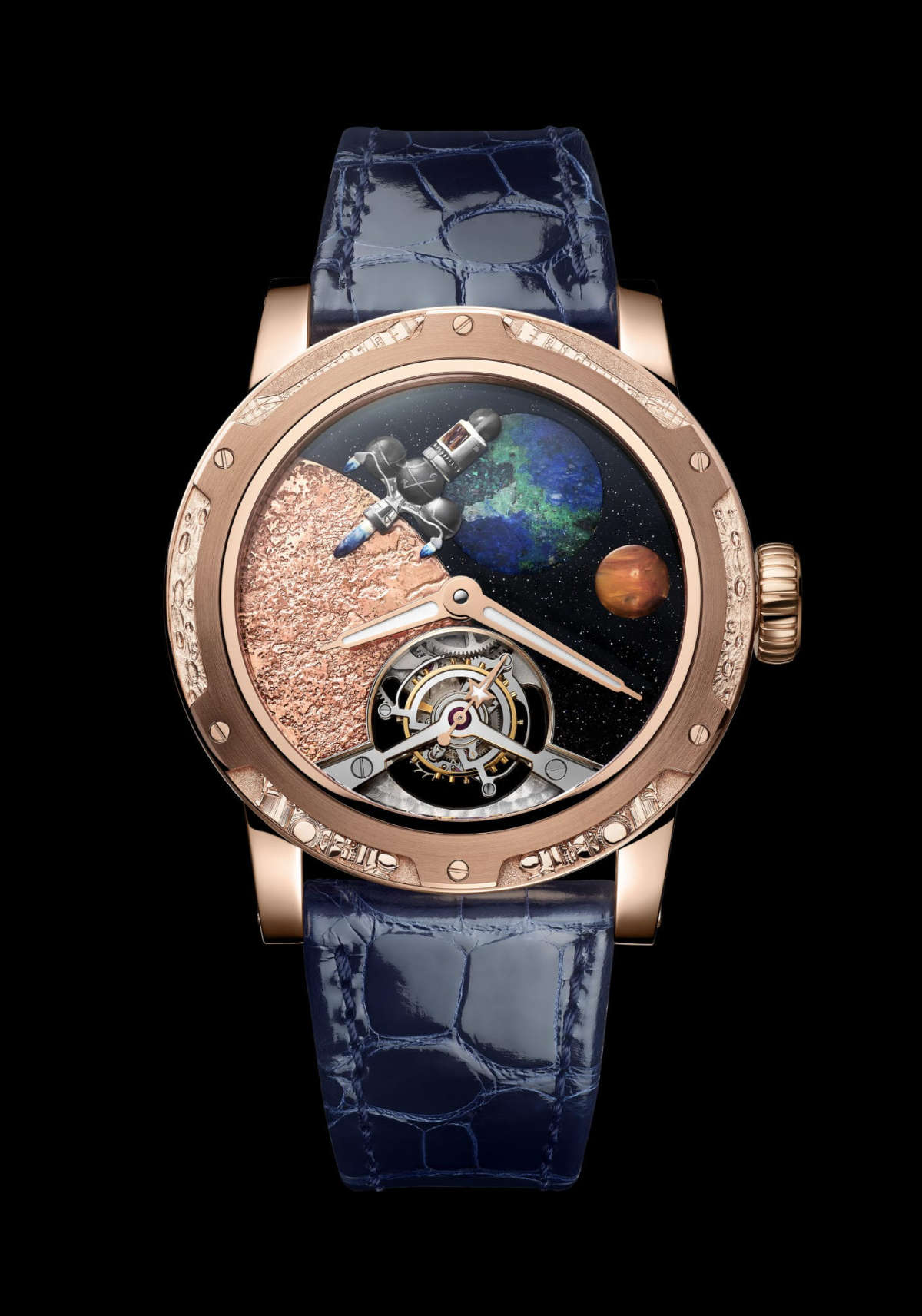 "Last on the Moon" is the final episode of the "Moon Race". One of the results of Luna 24 was the proof of the existence of water on the Moon.

Luna 24 is depicted on its journey back to Earth. Its prodigious design is hand-engraved, and a real piece of Luna 24 (resin-coated braided fibre) adorns its side. This material has travelled over a million kilometres through interplanetary space from the Earth to the Moon and back, aboard Luna 24.

The Moon is shown here in high contrast, with copper etching to highlight its craters.

Another of Nature's mysteries, azurite has been transformed into malachite by a phenomenon known as pseudomorphosis. This metamorphosis allows it to retain part of its appearance while morphing into malachite. The result is a very special mineral: azurite-malachite, which perfectly embodies the Earth.

It is complemented by a yellow Pietersite sun, which fully deserves its nickname of "storm stone". It lights up the sky with black aventurine of exceptional quality.

They represent the Proton rocket, a Russian heavy launcher capable of placing a 22-tonne payload into low earth orbit. It was used on many Soviet space missions, including Luna 24. Developed in the early 1960s, this rocket remains Russia's main launcher, with over 400 Protons launched to date.

The centre is decorated with lunar engravings, while the base of the bezel features the incredible design of the Luna 24 space probe. 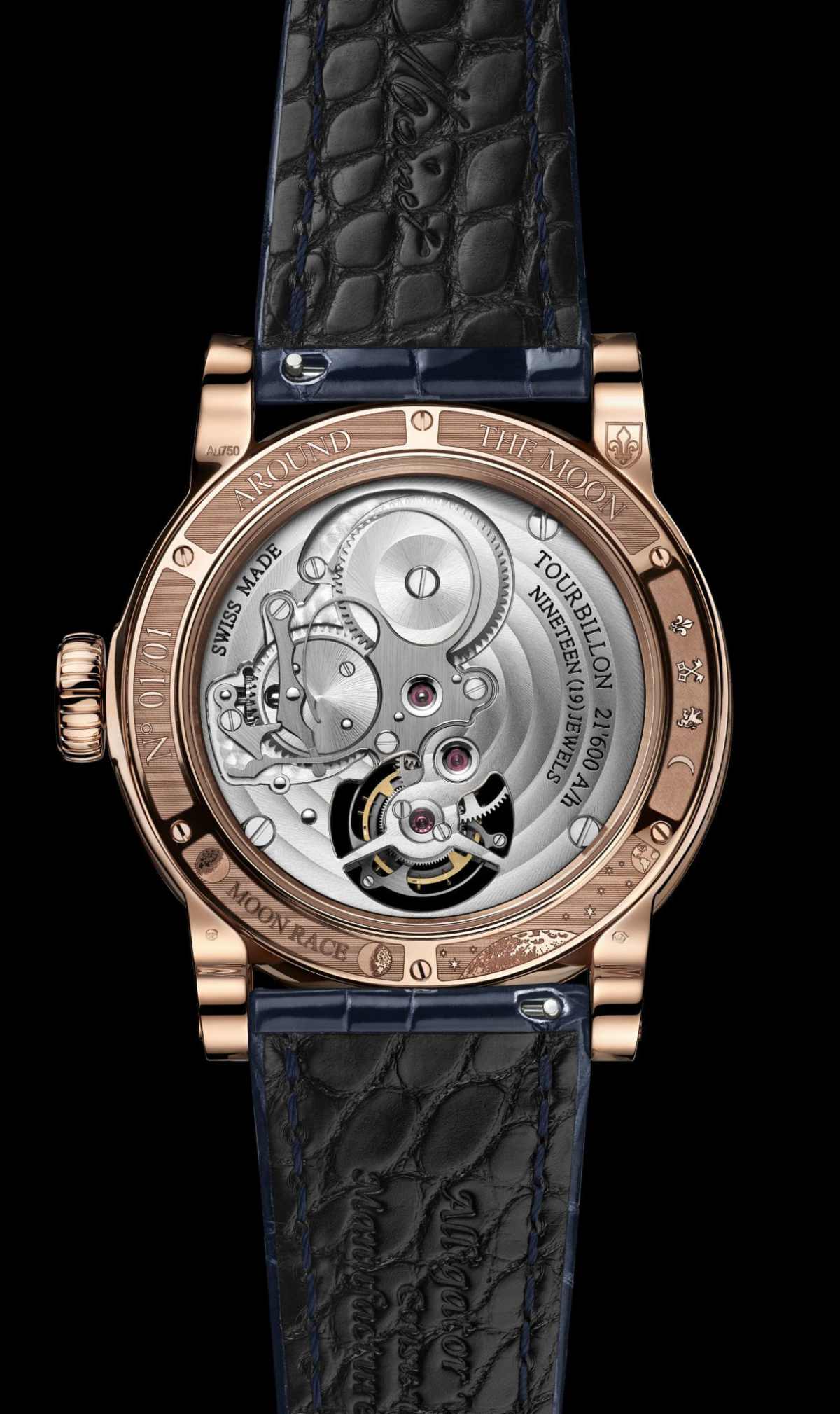 The trunk evokes the journey through space. It houses the four one-of-a-kind "Moon Race" creations.

It is made of natural elm burr wood and adorned with a black-lacquered Fleur de Lys pattern. The domed lid is topped by two cognac-coloured leather straps.

Its interior is made of black leather, and the inside of the cover features an 18th century treasure: the drawings of the Sphere of Copernicus & Sphere of Ptolemy, by Buy de Mornas. The printing is enhanced with watercolours, making this creation truly one of a kind. 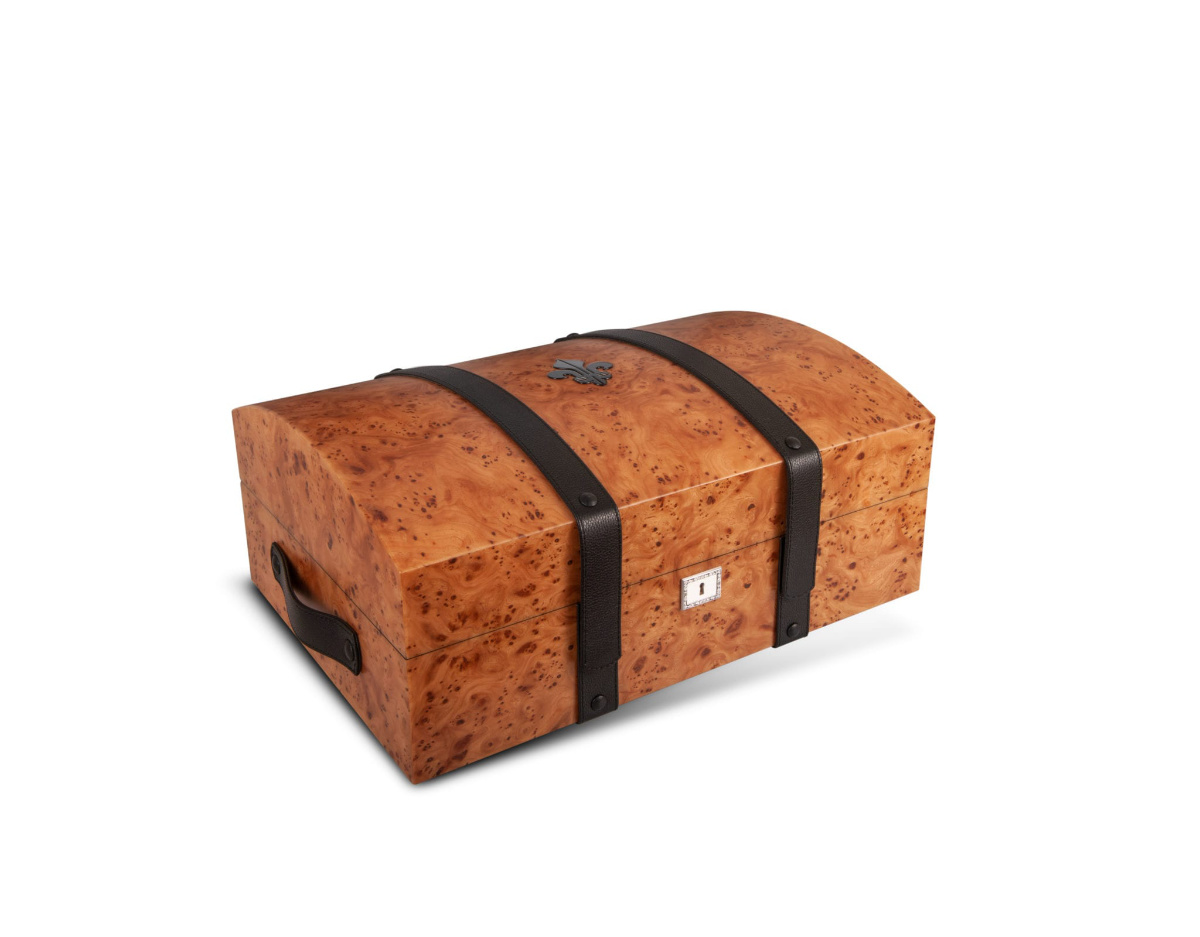 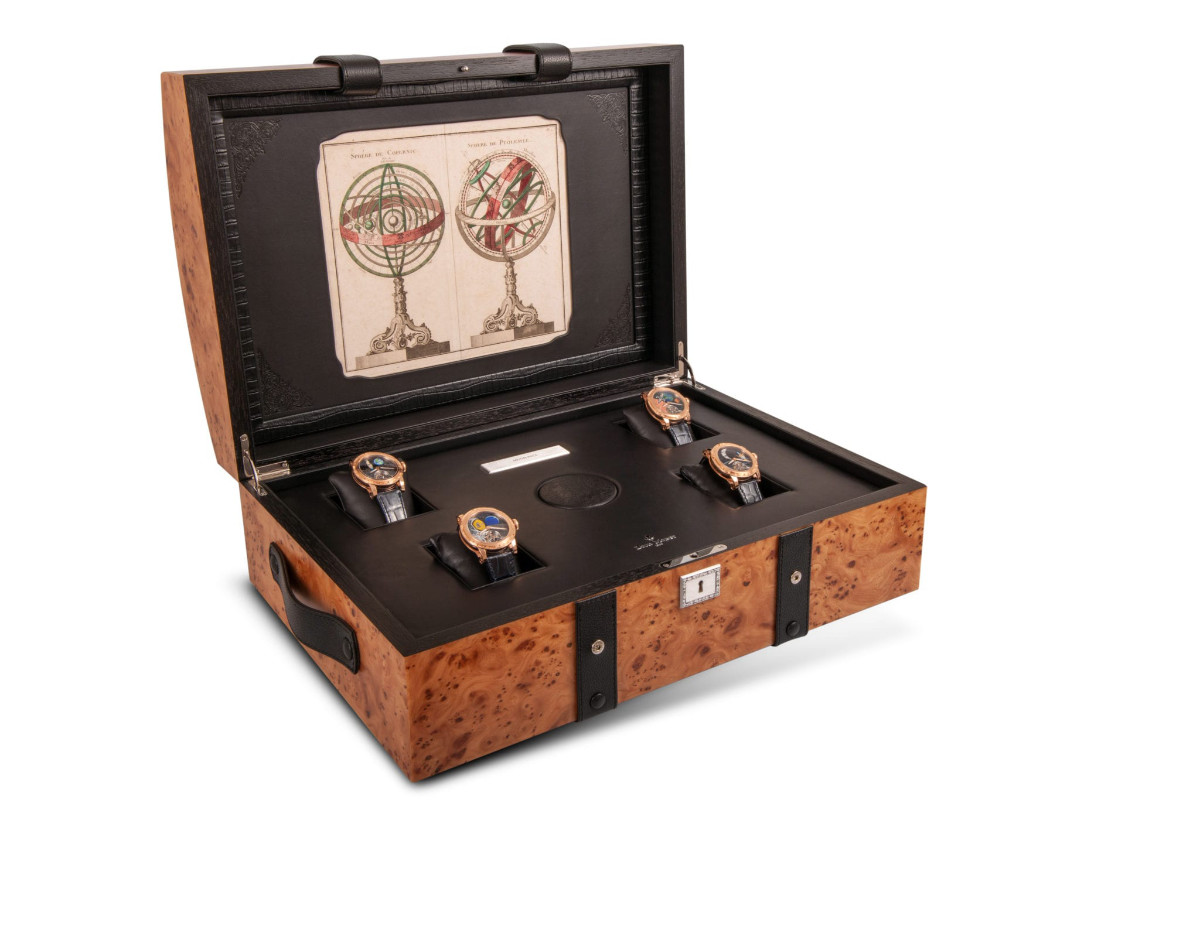 Provenance of the space-travelling materials

They are sourced from an expert who has personally acquired them from astronauts themselves, their families or their entourage, as well as from reputable auctions – thereby ensuring the best possible guarantees of authenticity. 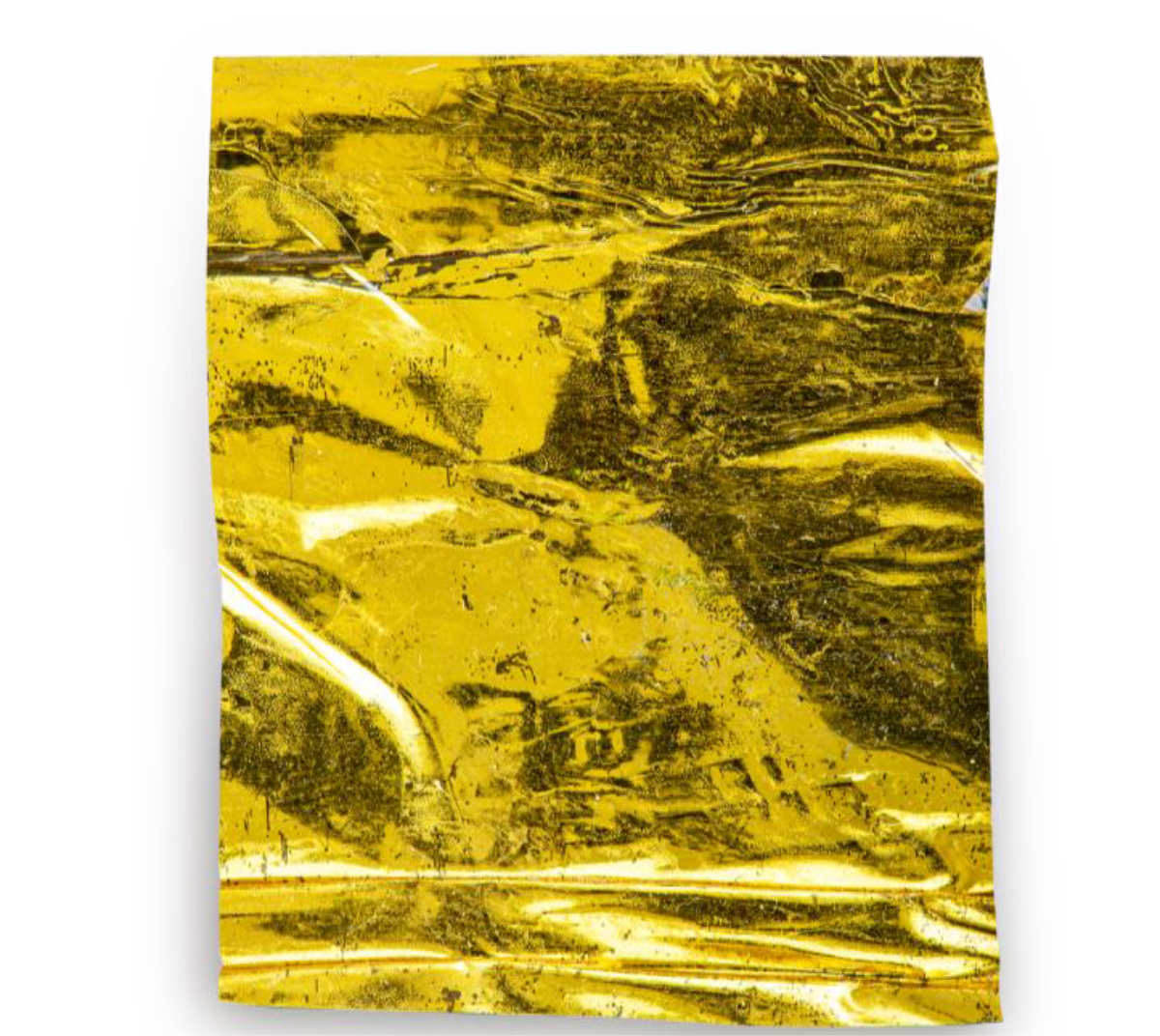 Jean-Marie Schaller created Les Ateliers Louis Moinet in St-Blaise (NE) in 2004. The fully independent firm was established to honour the memory of Louis Moinet (1768-1853): master watchmaker, inventor of the chronograph and high frequency (216,000 vibrations per hour) in 1816 (certifications by Guinness World Records™). Louis Moinet was a watchmaker, scholar, painter, sculptor, and teacher at the School of Fine Arts – as well as the author of the Traité d’Horlogerie, a watchmaking treatise published in 1848 that remained a definitive work of reference for a century.

Today, Ateliers Louis Moinet is perpetuating this legacy. The firm’s mechanical timepieces are produced as one-of-a-kind models or limited editions only and comprise two categories: “Cosmic Art” and “Mechanical Wonders”. Louis Moinet creations often make use of unusual and rare components, such as extraterrestrial meteorites or prehistorical materials. The brand’s core values are creativity, exclusivity, art and design. This uniquely creative mechanical approach combined with bespoke fine watchmaking has enabled Louis Moinet to win some of the most coveted honours around the world, including a UNESCO Award of Merit, six Red Dot Design Awards (including one Best of the Best Award), a Horological Creativity Contribution Award, gold and bronze medals in the International Chronometry Competition, ten Good Design Awards, four Middle East Watch of the Year Awards, two Robb Report “Best of the Best” Awards, three German Design Awards, two MUSE Design Awards, a Moscow Grand Prix Award, and a “Chronograph of the year” distinction from Begin Magazine, Japan.