Manufacture Breguet invites you to escape with a new interpretation of its Hora Mundi model within the Marine collection, a timepiece combining technical and aesthetic feats.

Travel at a click. The Hora Mundi became an instant hit at the time of its launch. This mechanical watch, which had taken three years to develop and been awarded four patents, featured a critical asset in the shape of an instant-change dual-time display with memory function.

This technical feat is accomplished via the pusher and crown. Having selected the first cities time and date, the owner of the watch need only set the second city. The watch mechanism then calculates the time and date by means of a clever system of cams, hammers and an integrated differential.

At that point, simply pressing the pusher is enough to travel from one end of the planet to the other, all without disturbing the accurate running of the watch.

The dial offers a fascinating interpretation of the world on the wrist by a play on materials and superimposed plates. On the first gold base, the hand-guilloché waves lap gently against the shores of the continents. The sunburst dial base attired in abyssal blue creates the impression of a permanent waltz of the wave motifs. This effect may also be due to the way in which the continents are depicted: an additional plate made of sapphire is composed of the metallised meridians and the continents are treated to horizontal satin brushing, while their coastlines are subtly outlined with a metallic turquoise border. Finally, an outer flange serves as a support for the various elements present on the dial. The result features brilliantly crafted dimensions and surfaces thanks to various treatments requiring several weeks of work. 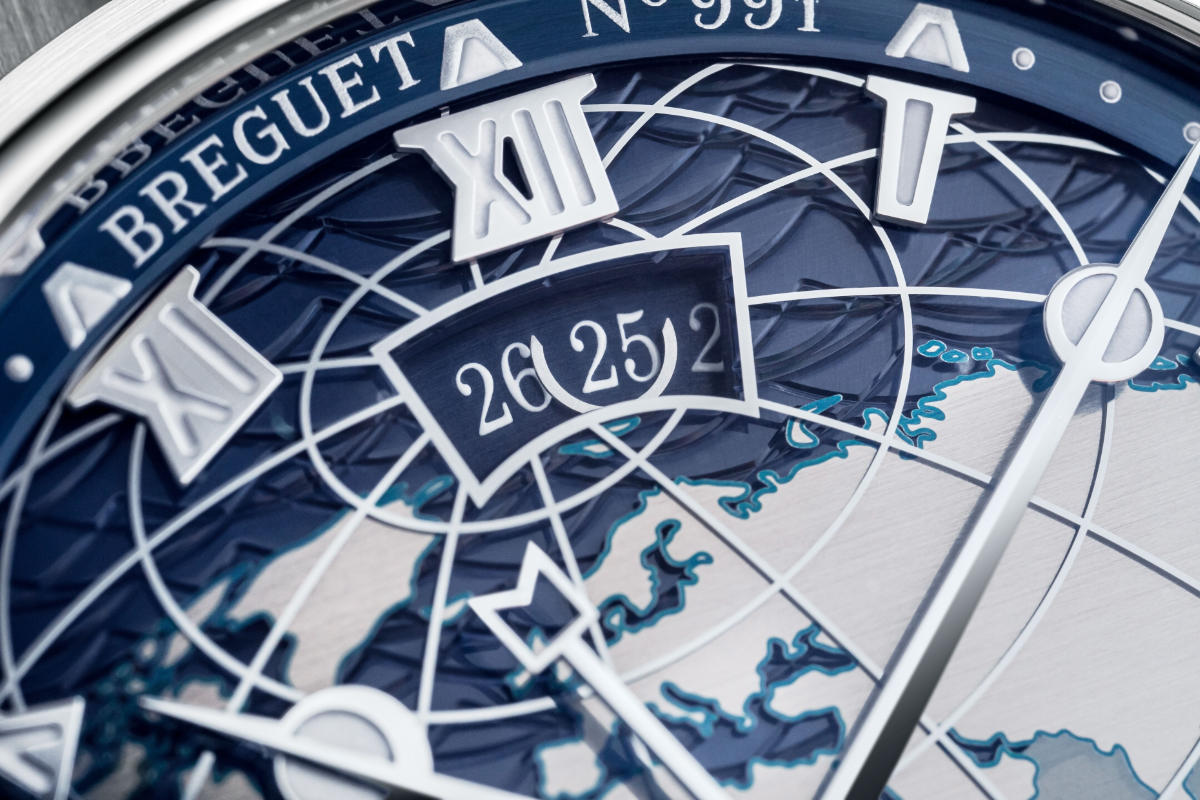 The importance of details

Making the dial legible while endowing each indication with a special aesthetic: for Breguet, luxury resides in the details – which is notably why the hours and minutes hands as well as the hourmarkers are adorned with luminescent material ensuring nocturnal legibility. The Sun and Moon positioned at 4 o’clock are hand-hammered to create a strongly realistic result. While the sun is a luminous rose gold, the moon is rhodium-plated and exudes a mysterious grey appearance. Displayed through a 12 o’clock aperture, the date features an additional retrograde hand ingeniously placed beneath the aperture dial and featuring a delicately rounded “U-shaped” tip serving to encircle the date of each passing day.

The subtle finish referred to as brouillage is an ancient watchmaking decoration that has been updated and creates a matt yet shiny effect. It also facilitates reading while remaining discreet. The cities corresponding to the different time zones are indicated at 6 o'clock. A metallised anchor appearing above the window serves to determine the place whose current time you wish to consult.

The 43.9 mm-diameter case, available in a choice of white or rose gold, houses Calibre 77F1 whose balance oscillates at a frequency of 4 Hz. This mechanical self-winding movement is fitted with an escapement made of silicon – a material with multiple properties that is resistant to both corrosion and wear. It is also insensitive to the effects of magnetic fields. Calibre 77F1 features a unique asset in the form of its patented additional modules for the dual time-zone mechanism, the second time-zone display, the programmable and reprogrammable mechanical memory wheel and the pointer-type day/night display. 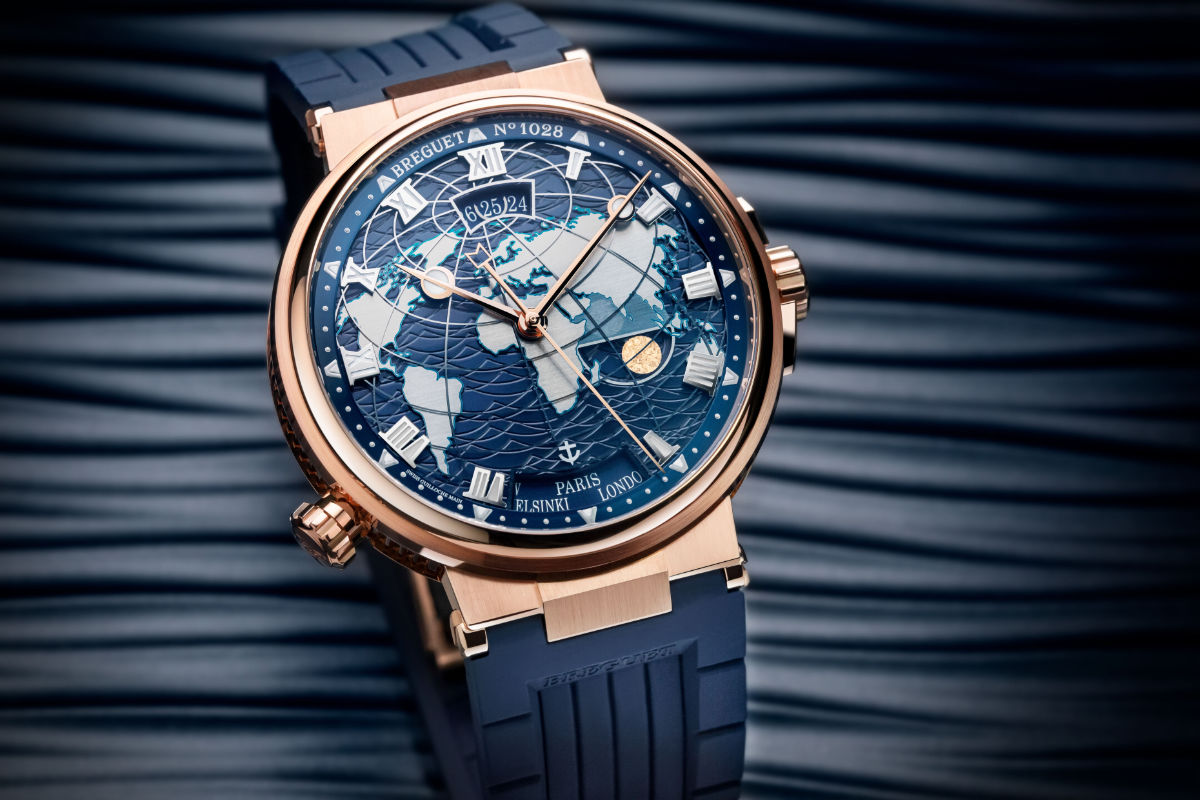 Part of this exceptional mechanism with its 55-hour power reserve can be admired through the sapphire caseback, elegantly adorned with Côtes de Genève, guilloché and snailed finishing.

Ready to travel the world, the new Marine Hora Mundi is available with either a leather strap, a rubber strap or a gold bracelet. 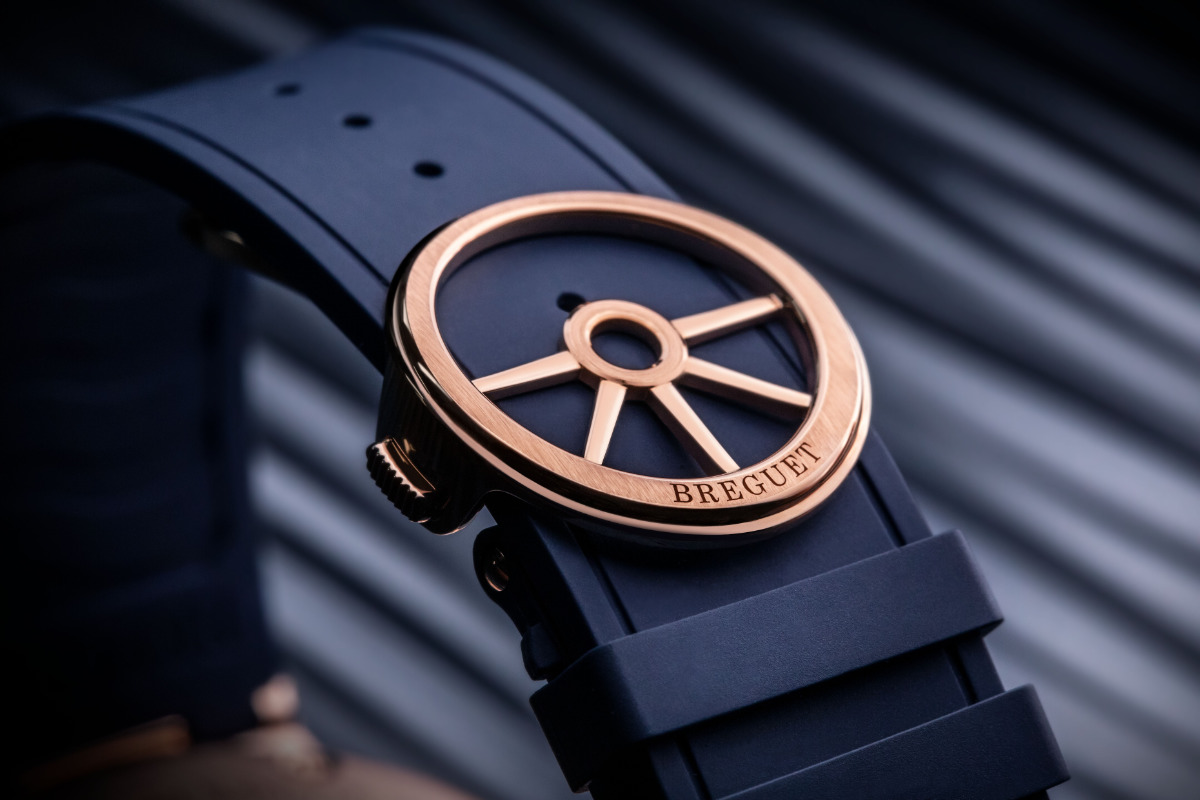 Breguet and the Navy

Recognised as an outstanding scientist and technician, Abraham-Louis Breguet linked his destiny to that of the French Navy in 1814 when he became a member of the Bureau des Longitudes by royal decree, alongside academics such as Delambre, Biot and Laplace. One of the bureau's roles was to solve astronomical problems related to the determination of longitude at sea. It was however one year later that King Louis XVIII awarded Breguet one of the most honourable titles of the era: that of Watchmaker to the Royal Navy. The fleets of the greatest explorers sailed equipped with a Breguet timekeeping system. Today, the Marine line with its elegant yet sporty look is one of the brand's emblematic collections. 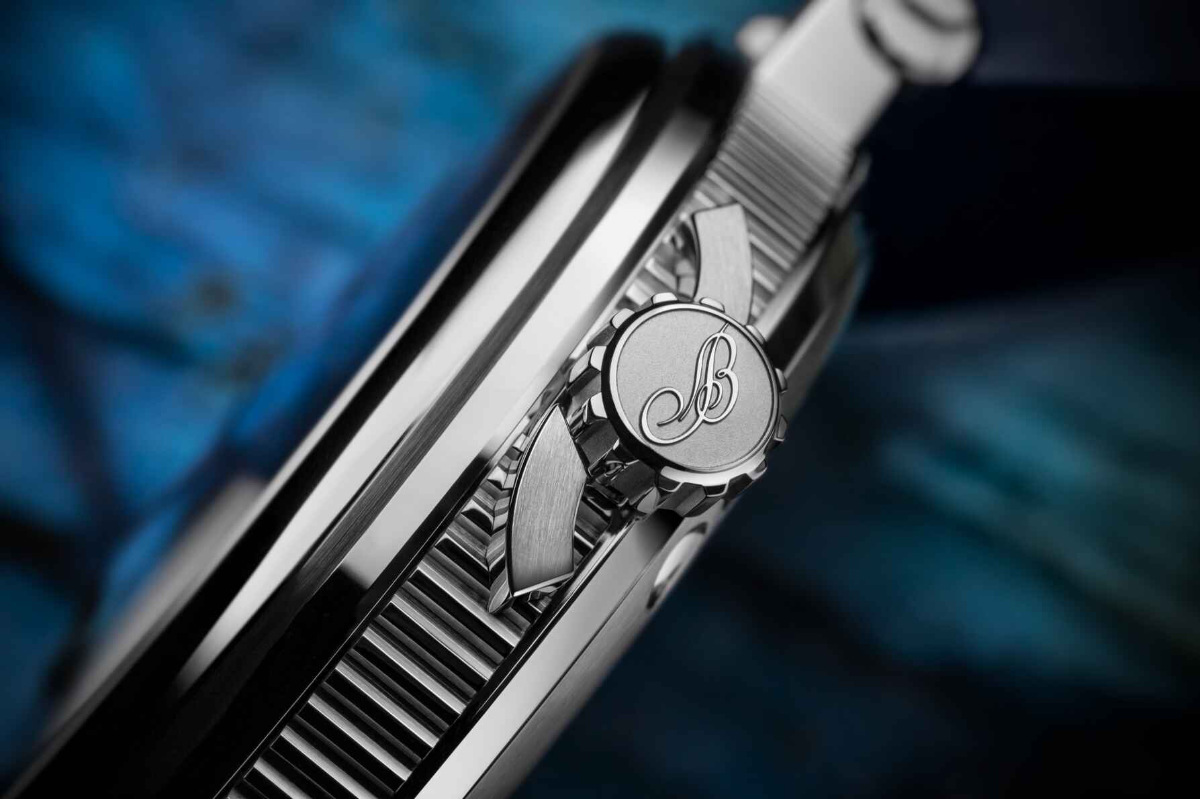 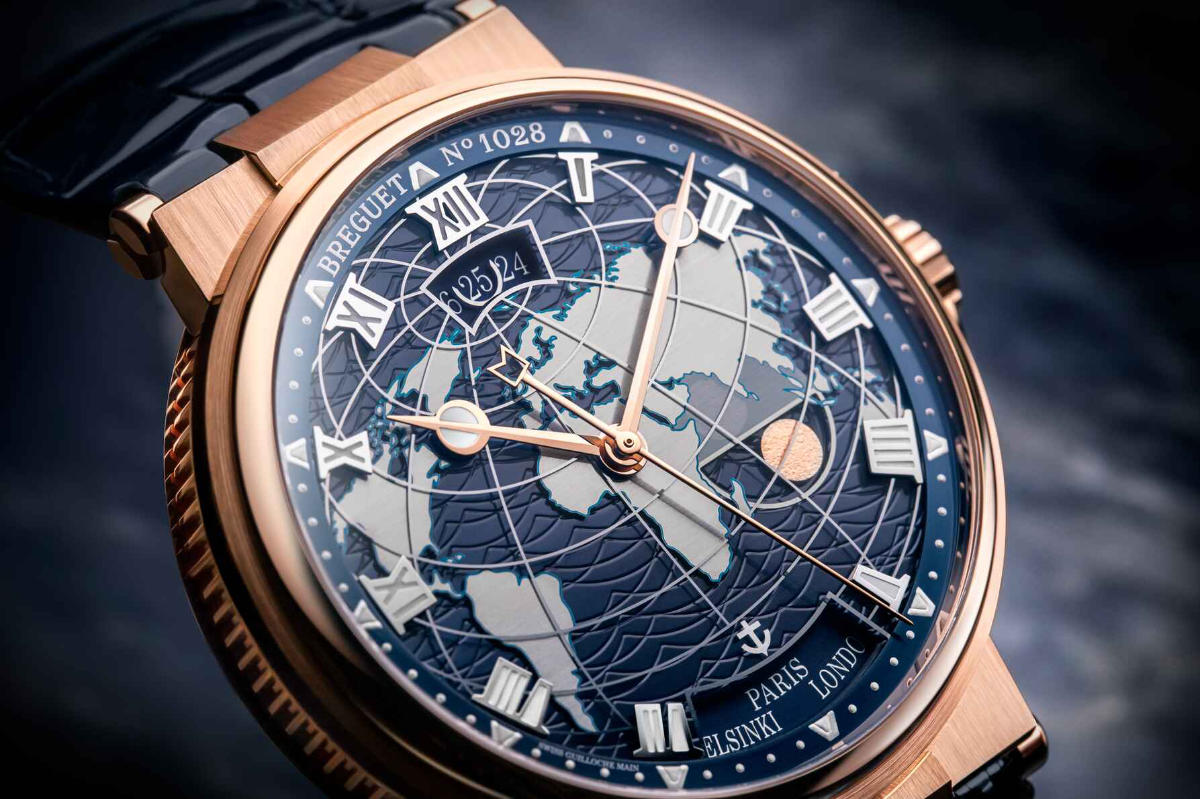 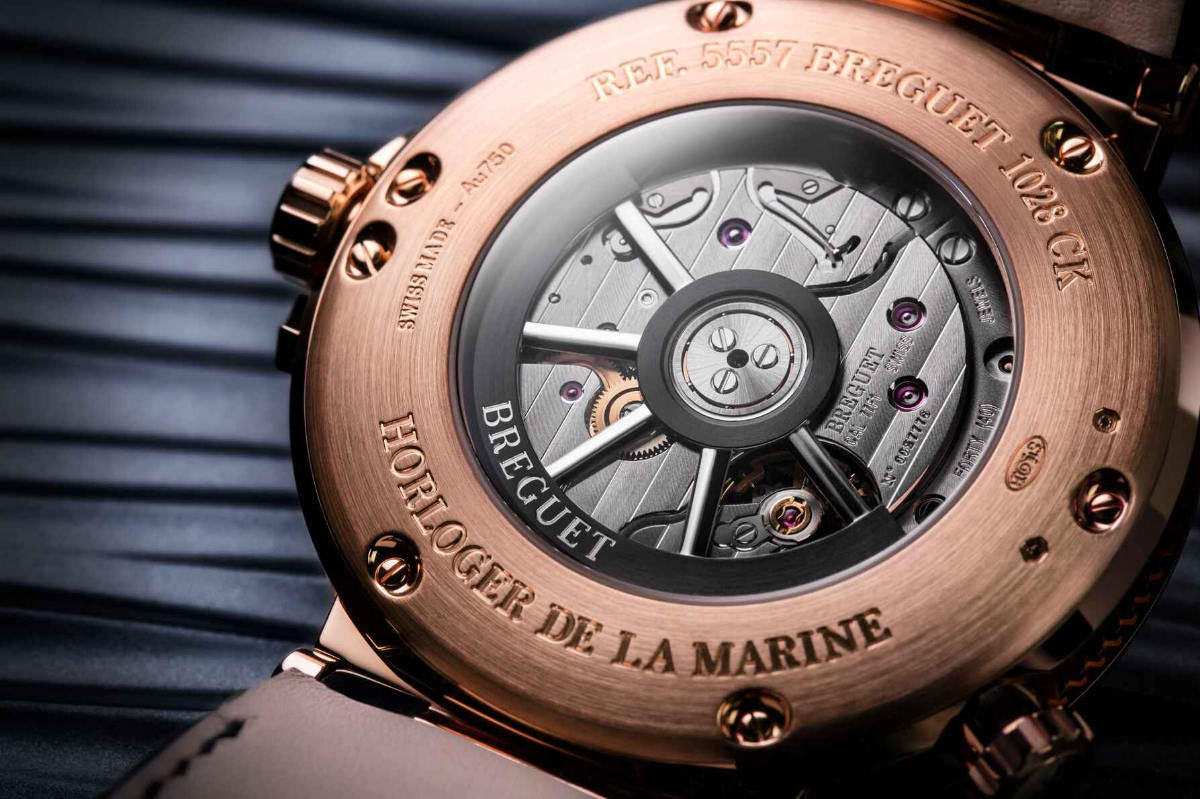