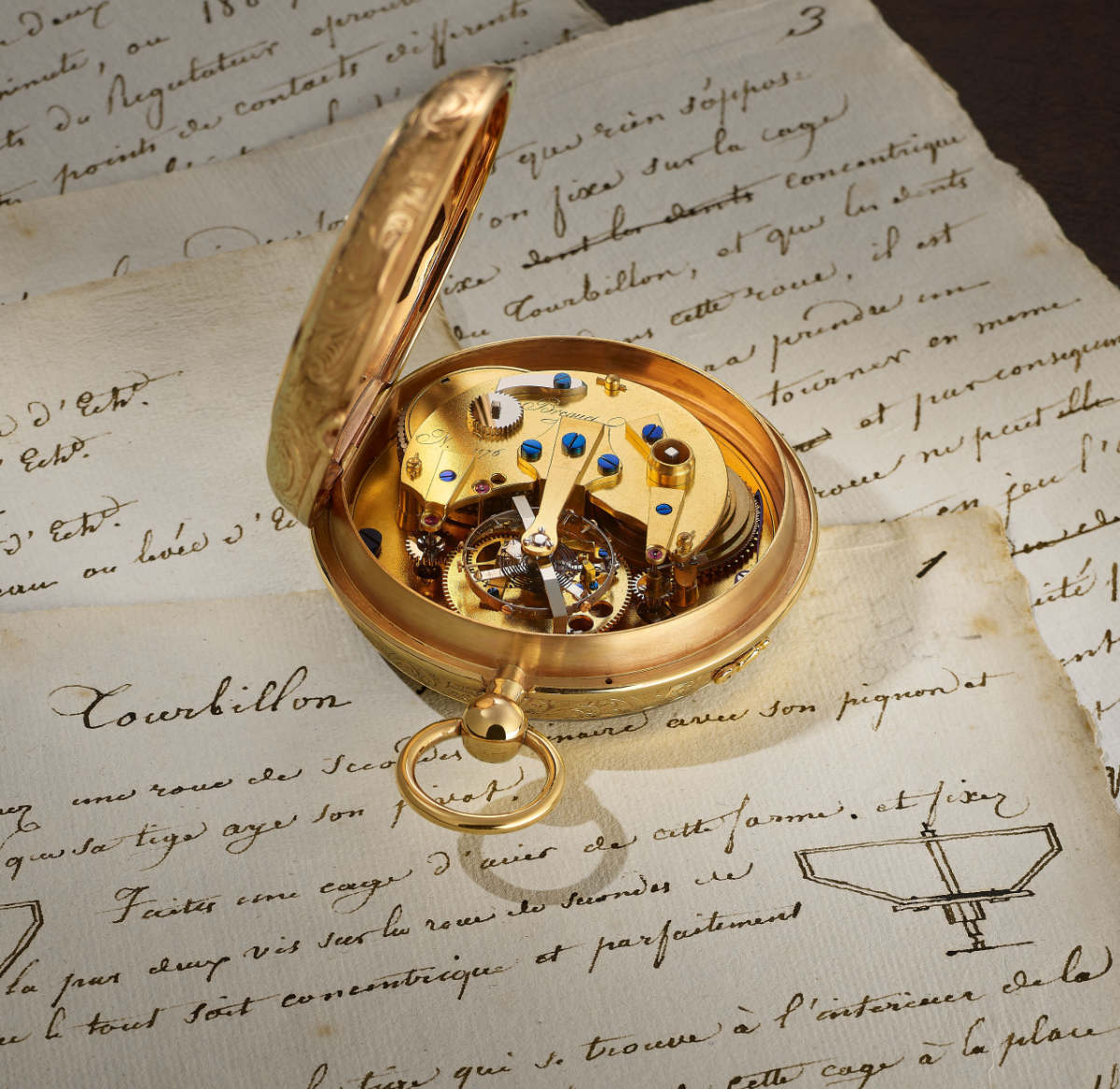 Breguet invites fans, enthusiasts, and collectors to celebrate Tourbillon Day on June 26. On this day, Breguet boutiques across the globe offer the chance to discover the collections and learn more about this unique complication.

Abraham-Louis Breguet obtained the patent for the Tourbillon on June 26, 1801. For more than two centuries, his masterpiece of ingenuity has continued to evolve and develop, refined by generations of watchmakers and engineers. As heir to this history, and custodian of this unparalleled invention in the world of watchmaking, the House of Breguet continues to meet daring challenges by creating timepieces that emerge from the junction between art, beauty, and technology. A mission that attracts regular investment, whether in ultra-modern control equipment or Research and Development. A large number of patents have been filed along the way, to perpetuate the most famous invention in watchmaking. Numerous Tourbillon models in the current collection attest to the desire of Breguet to perfect the invention of 1801. Here are seven of them, all of which have added to the fame and glory of this mechanical masterpiece over the years.

The Tourbillon seems to float in space with no visible link to the rest of the movement. The key to achieving this mysterious construction lies in the use of sapphire. The Tourbillon is mounted between two sapphire plates, while its carriage is attached to a third, representing a novel solution, which has been patented. 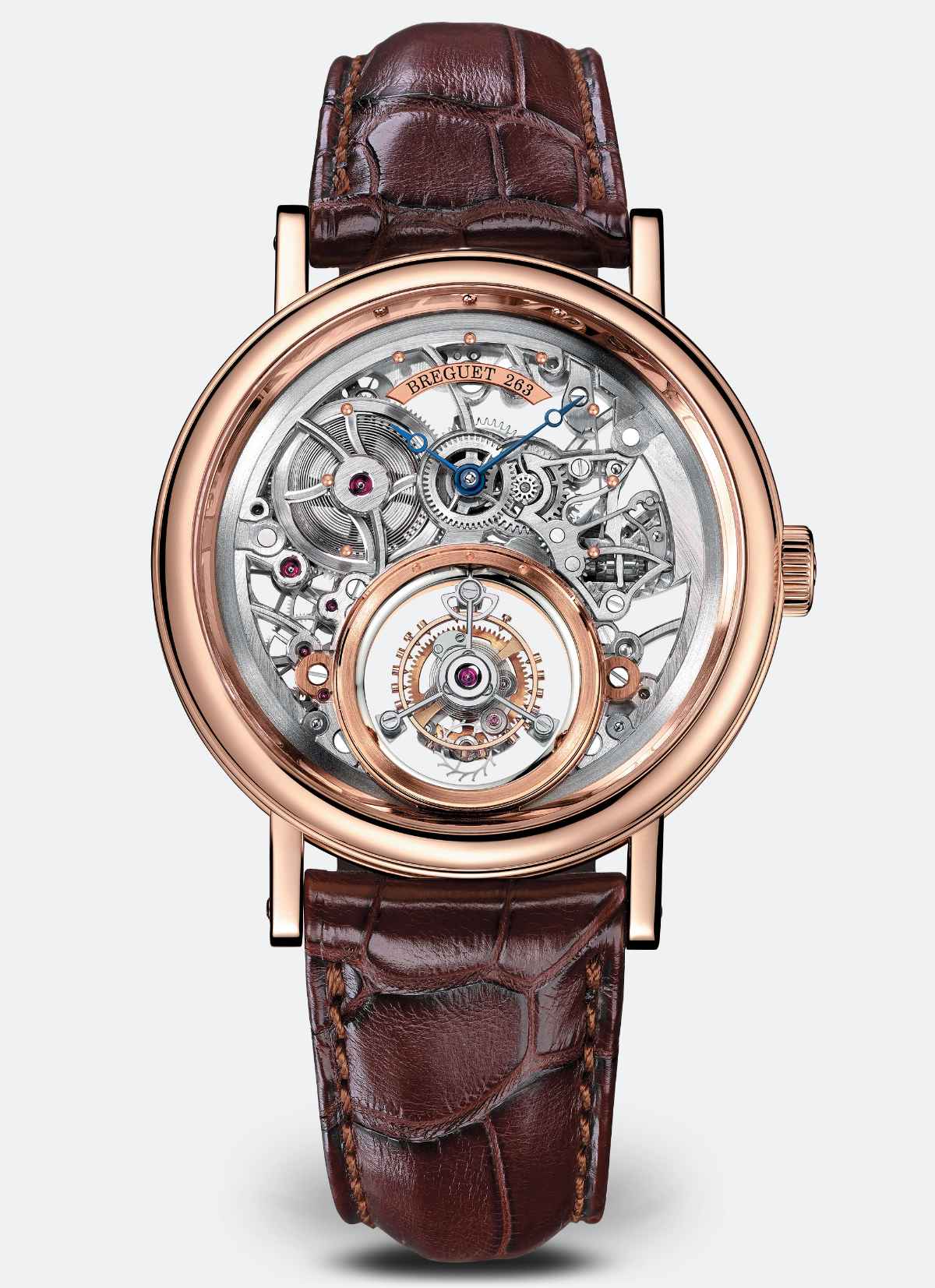 This barrel-shaped model has a Tourbillon powered by a manual winding movement. The contours of this caliber are identical to those of the case. Breguet’s watchmakers had to overcome a series of significant challenges to create a movement that perfectly fits the tonneau shape. The architecture of the piece puts the Tourbillon in perspective, accentuating the technical skills that went into making it. A unique element, the Tourbillon bridge, acts as the 6 o’clock marker on the dial. 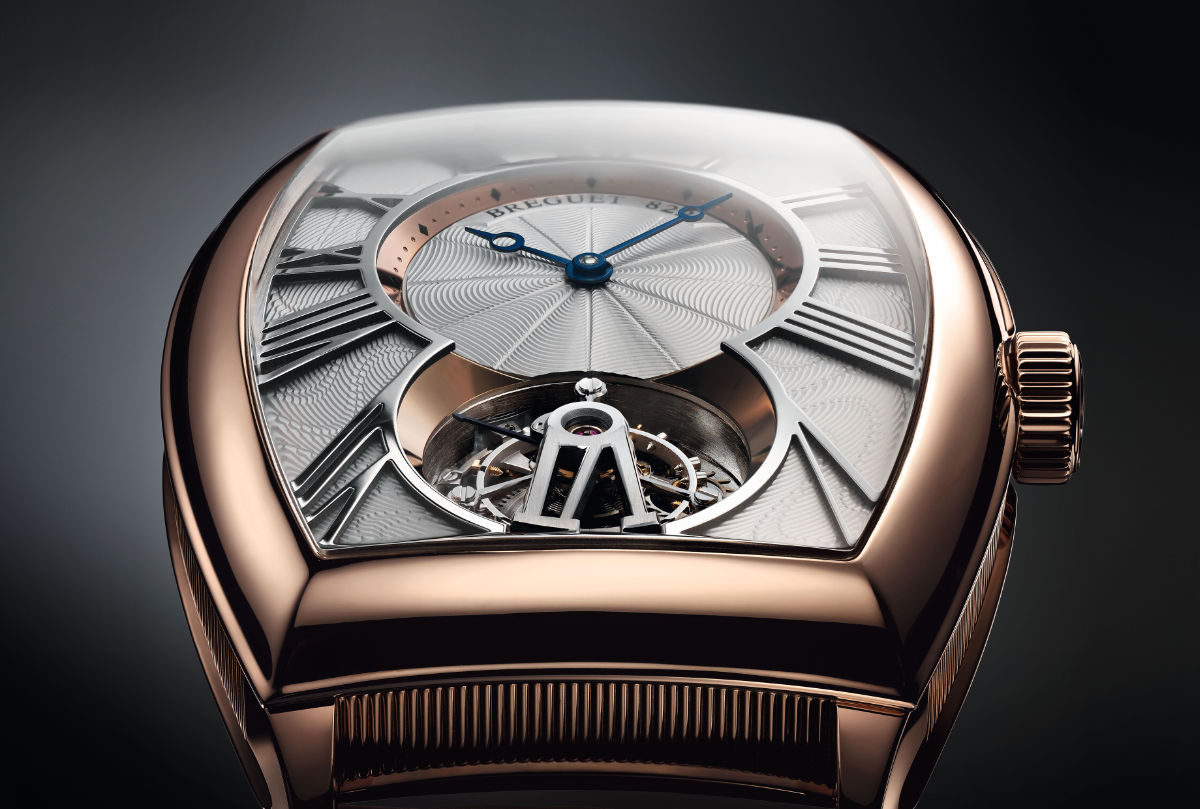 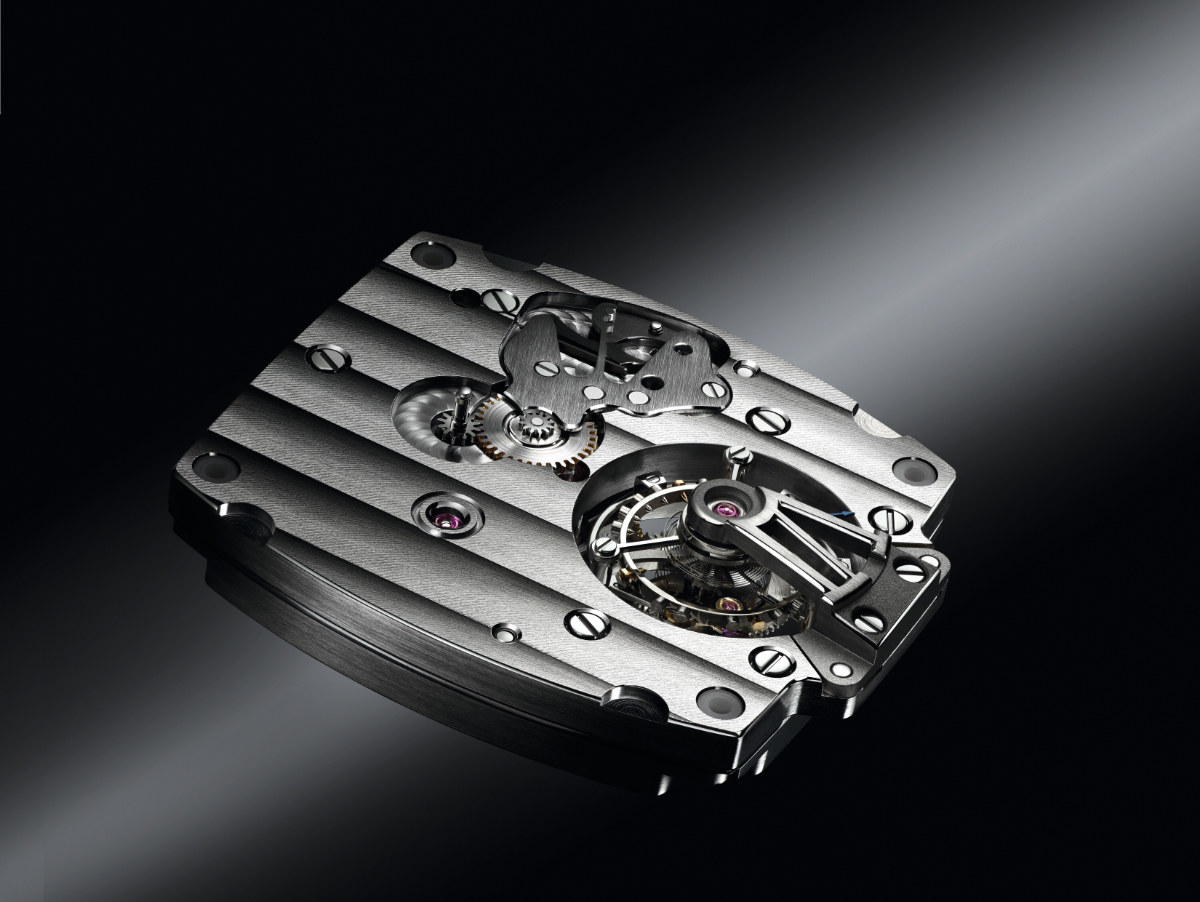 The Tourbillon carriage of this piece adopts a geometry directly inspired by the first sketches of A.-L. Breguet. A patented mechanism provides anti-shock protection. A veritable feat – the balance spring with the famous raised terminal curve called the Breguet overcoil is made of silicon, a material insensitive to magnetic fields, according to a patented process. 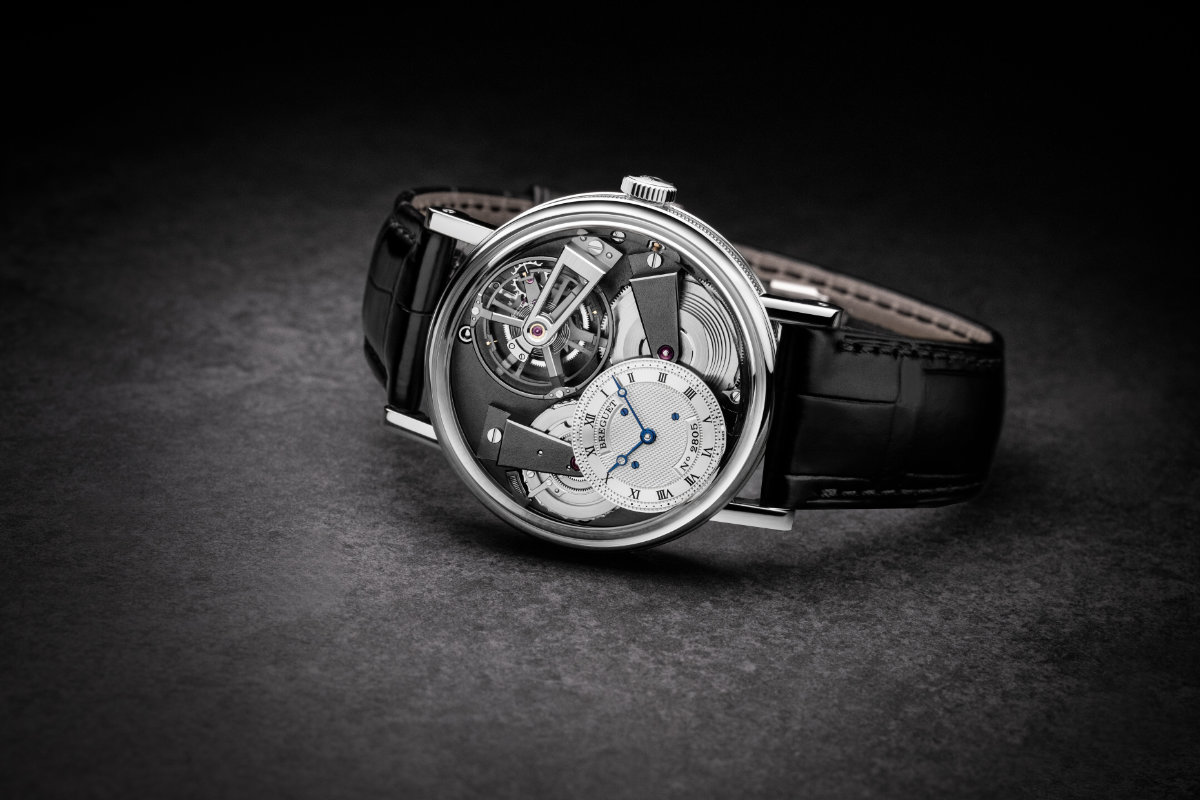 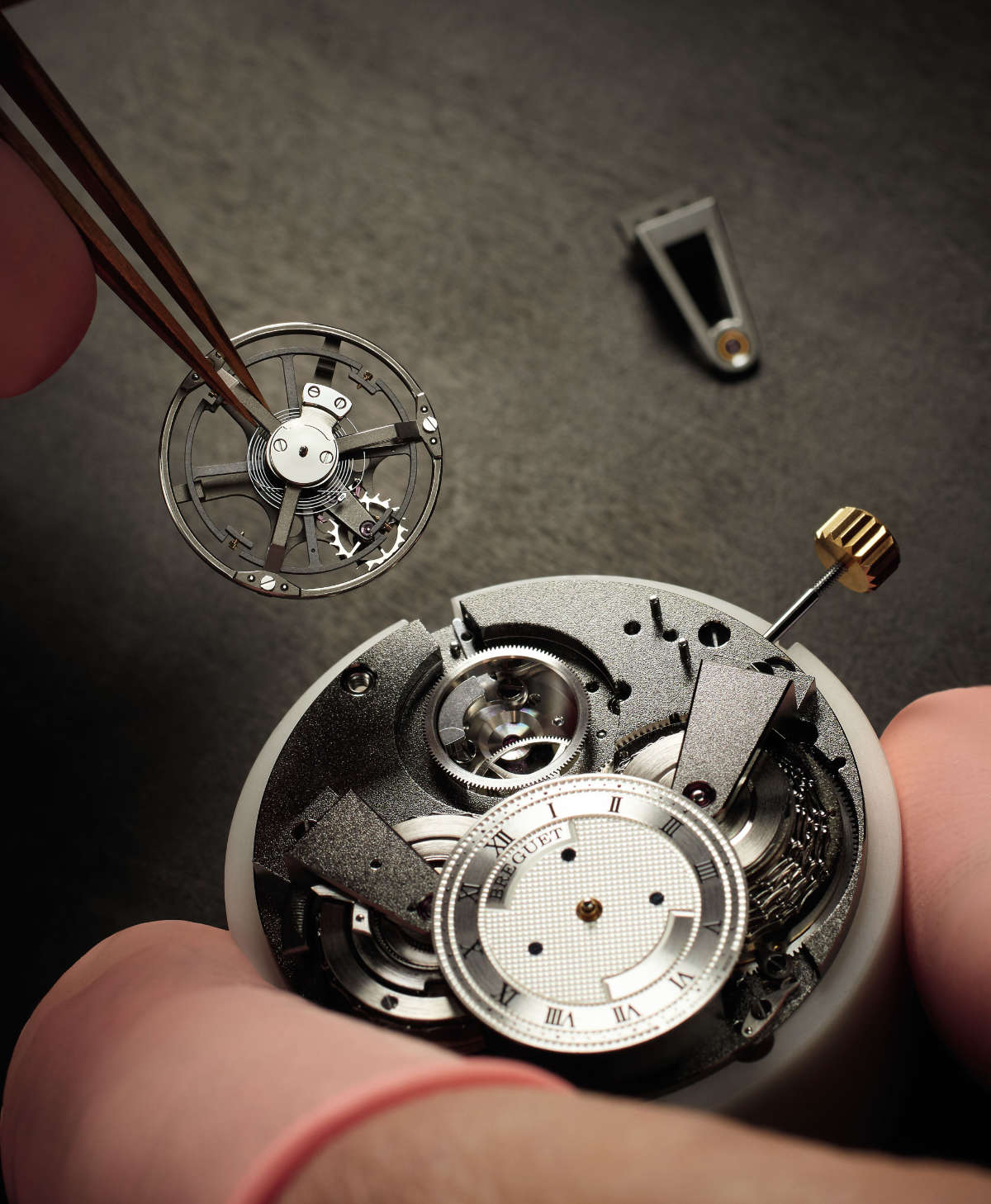 At the heart of its movement, incorporating a perpetual calendar and the running equation of time, is a cam placed on a sapphire disk. It performs one revolution per year and faithfully reproduces the cycle of the equation of time. This patented transparent disk, which indicates the 12 months of the year on the periphery, offers a glimpse of the Tourbillon below. The indication of the equation of time is provided by the finger-piece, which follows the shape of the cam. 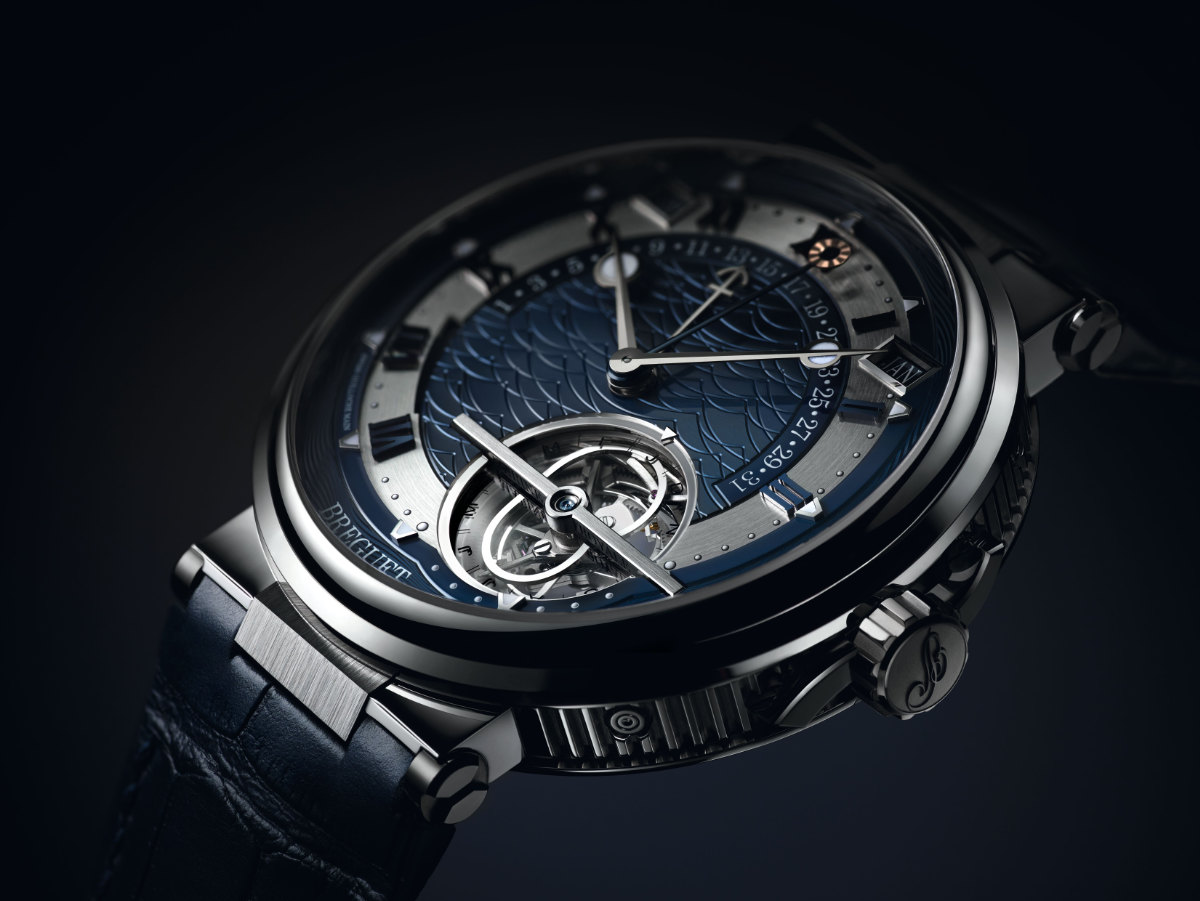 Modern technologies have played a key role in the design of this ultra-thin Tourbillon with a movement only 3 millimeters thick, thanks to a titanium carriage, a silicon balance spring and escape wheel. As the construction of the movement has been redesigned, the rotation of the carriage is propelled by a peripheral toothed wheel. 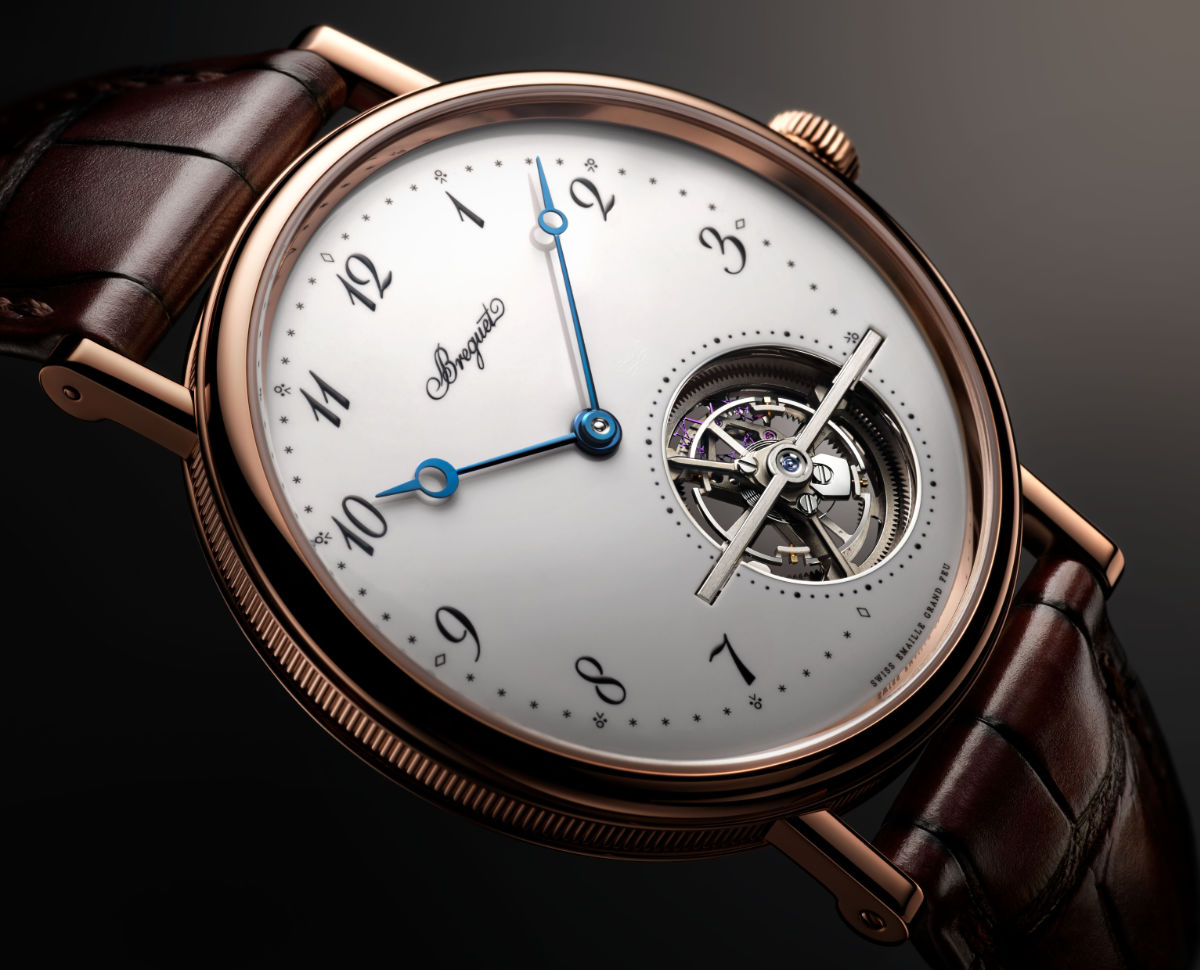 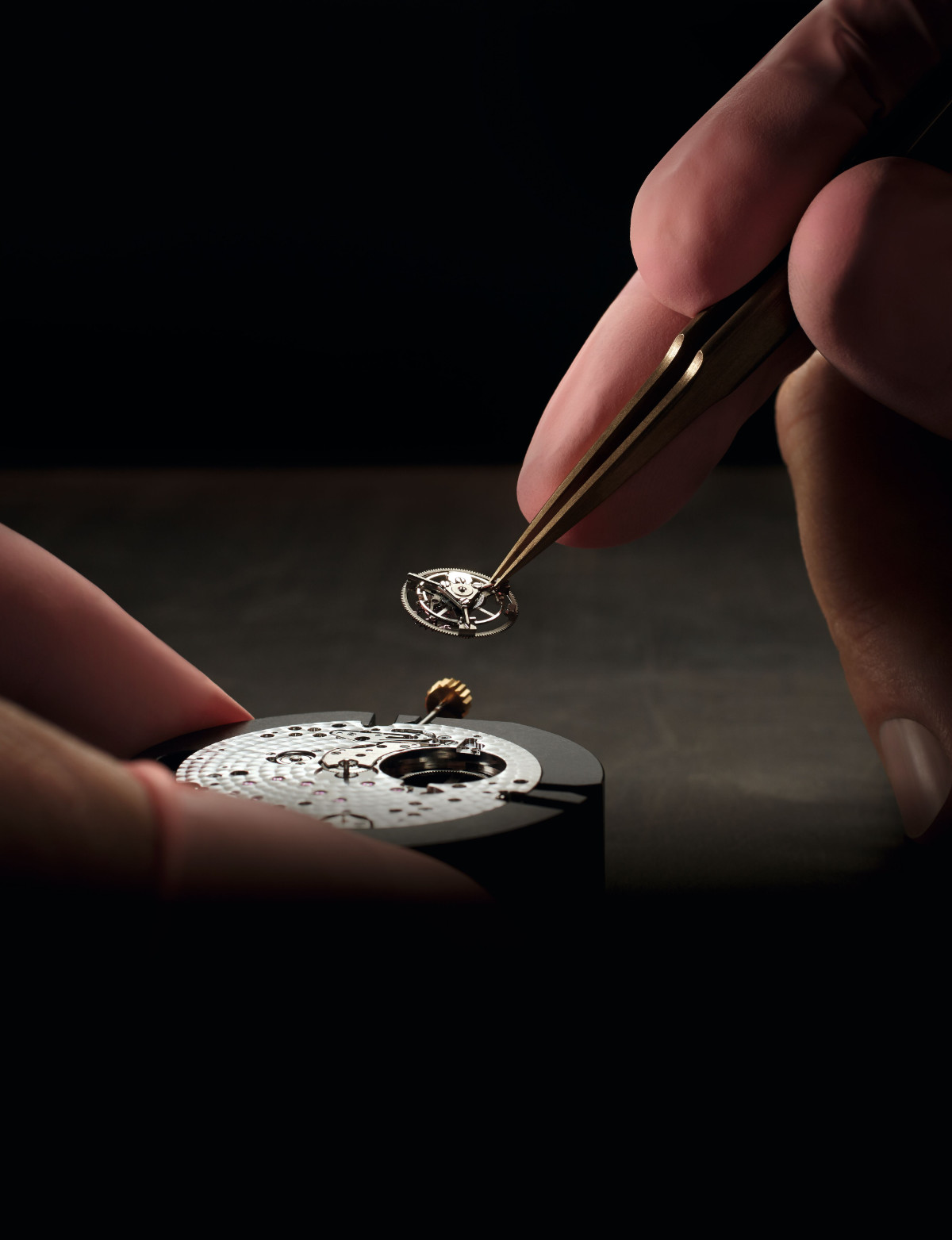 The extra-thin caliber of this timepiece features a balance wheel oscillating at a high frequency of 4 hertz, while maintaining a comfortable power reserve of 80 hours. This is made possible by the high energy barrel, the design of which is patented. The caliber is fully skeletonized. The gold plate and bridges have been hollowed out and hand-decorated so as to display the mechanical anatomy of the movement. 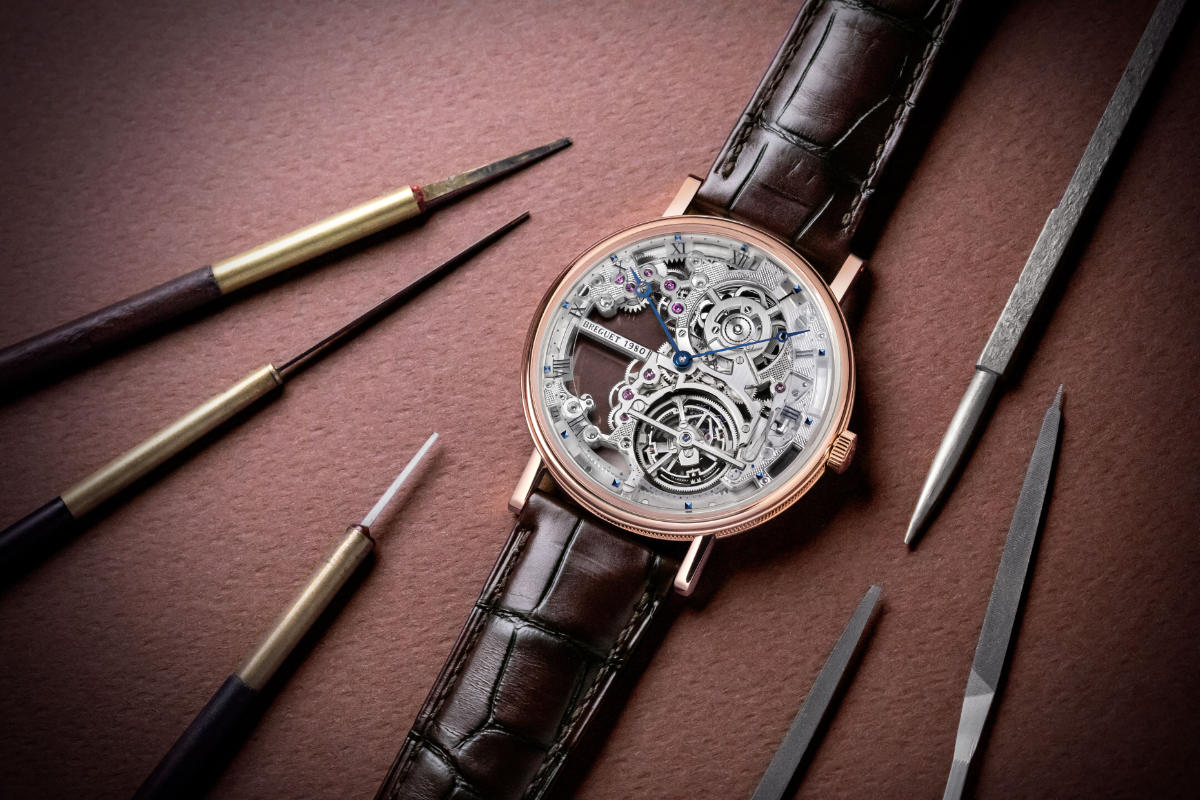 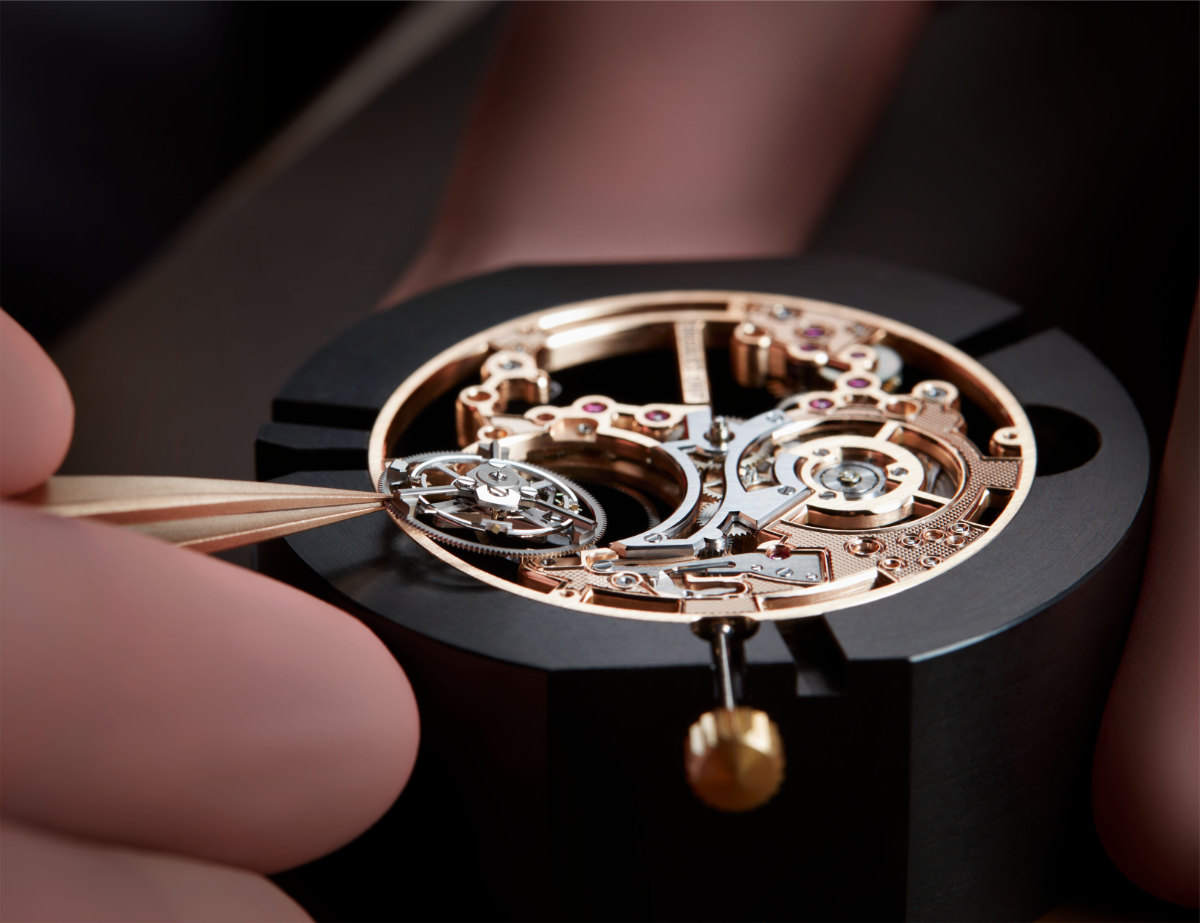 The astute construction of this movement has been covered by several patents. The two mechanical hearts beat independently from one another, each driven by their own barrel. Like a delicately chased sculpture, the entire movement pivots around its axis to the rhythm of one revolution every 12 hours. The various calibrations are done manually, such as the poising and balancing of the Tourbillon carriages.

Patented on June 26, 1801, the Tourbillon underwent more than 10 years of development. When he finally released the results of his research to the public, Abraham-Louis Breguet did not write just one page on watchmaking. No, in fact, he started a book that even 220 years later, is not finished yet – far from it. 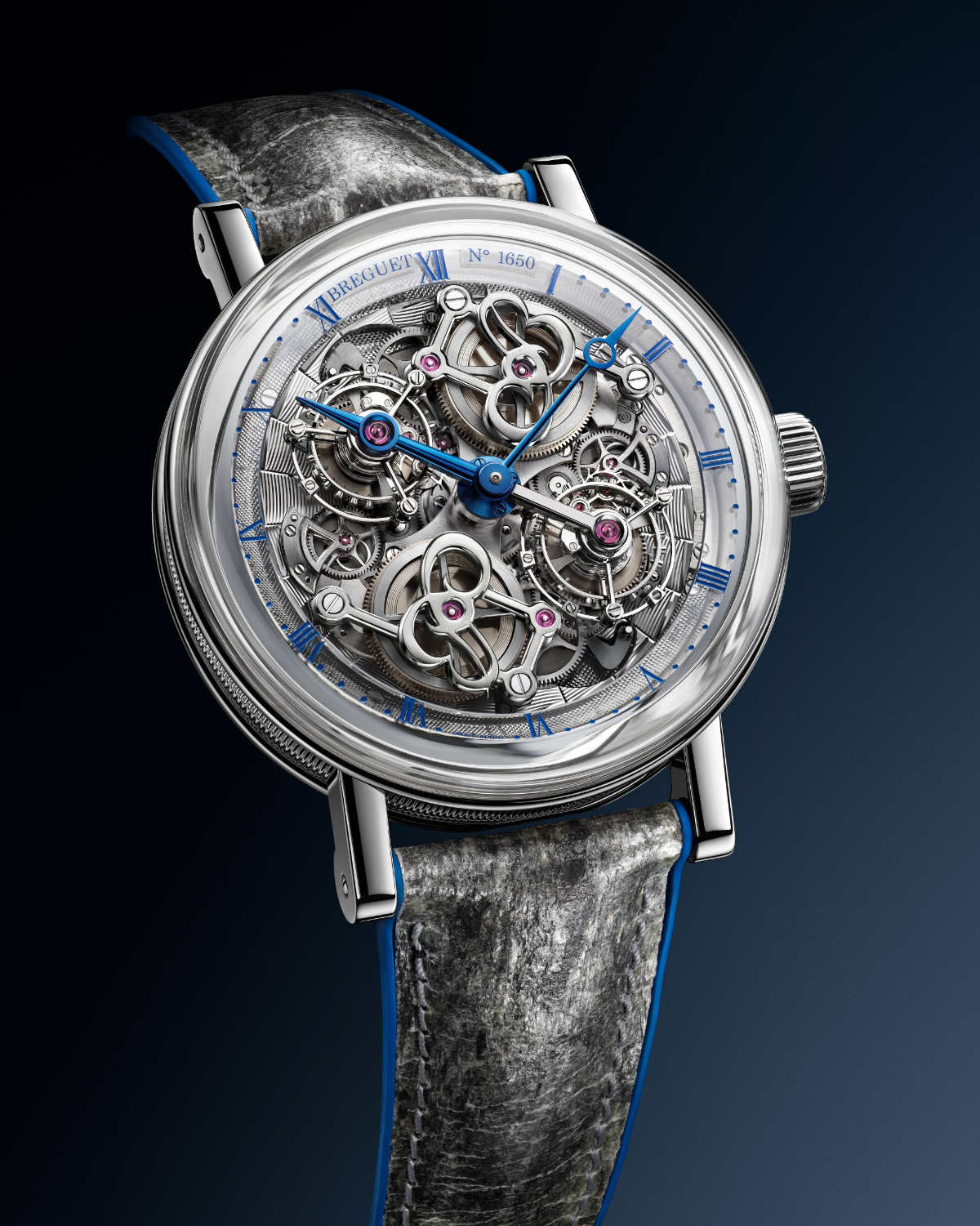 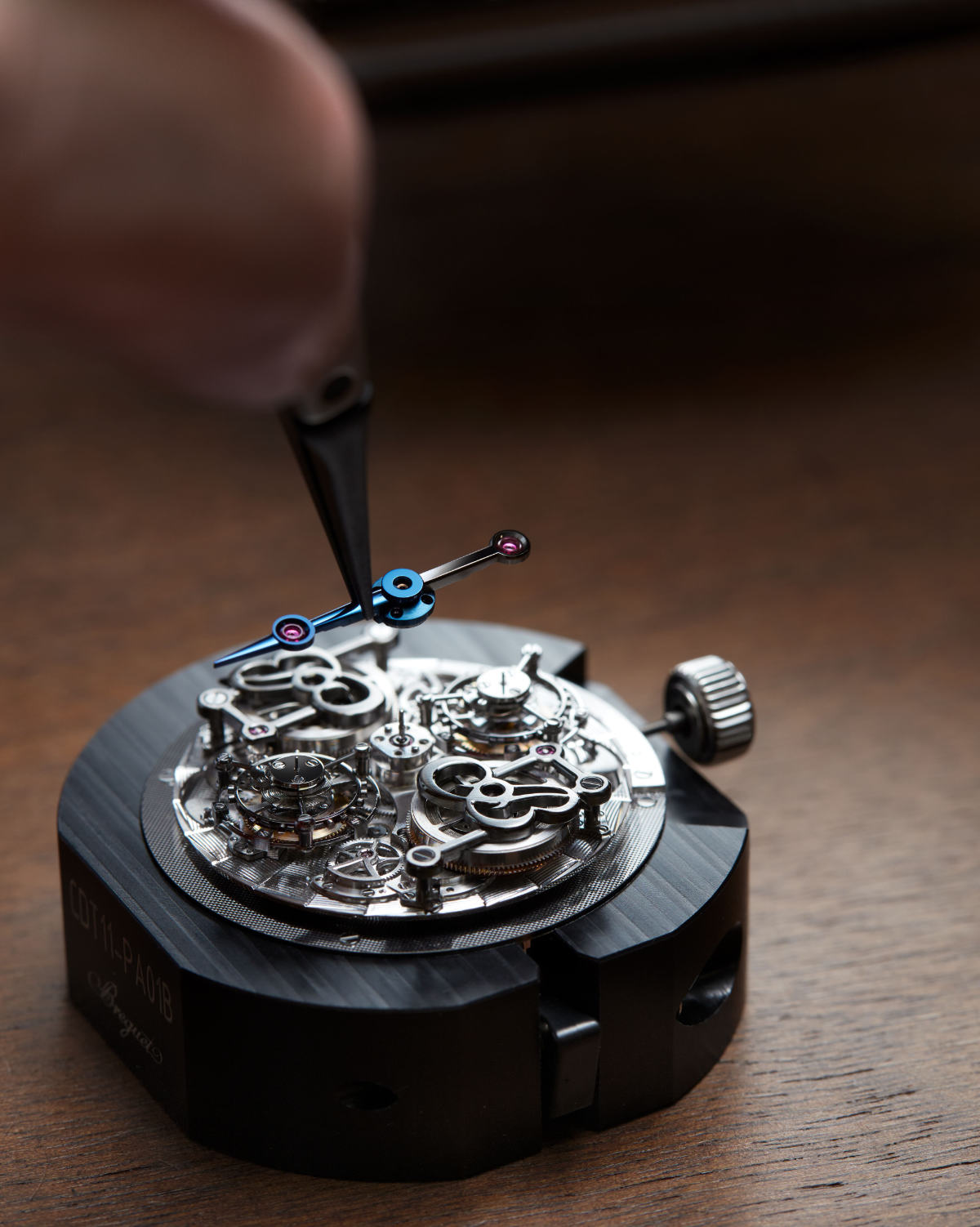