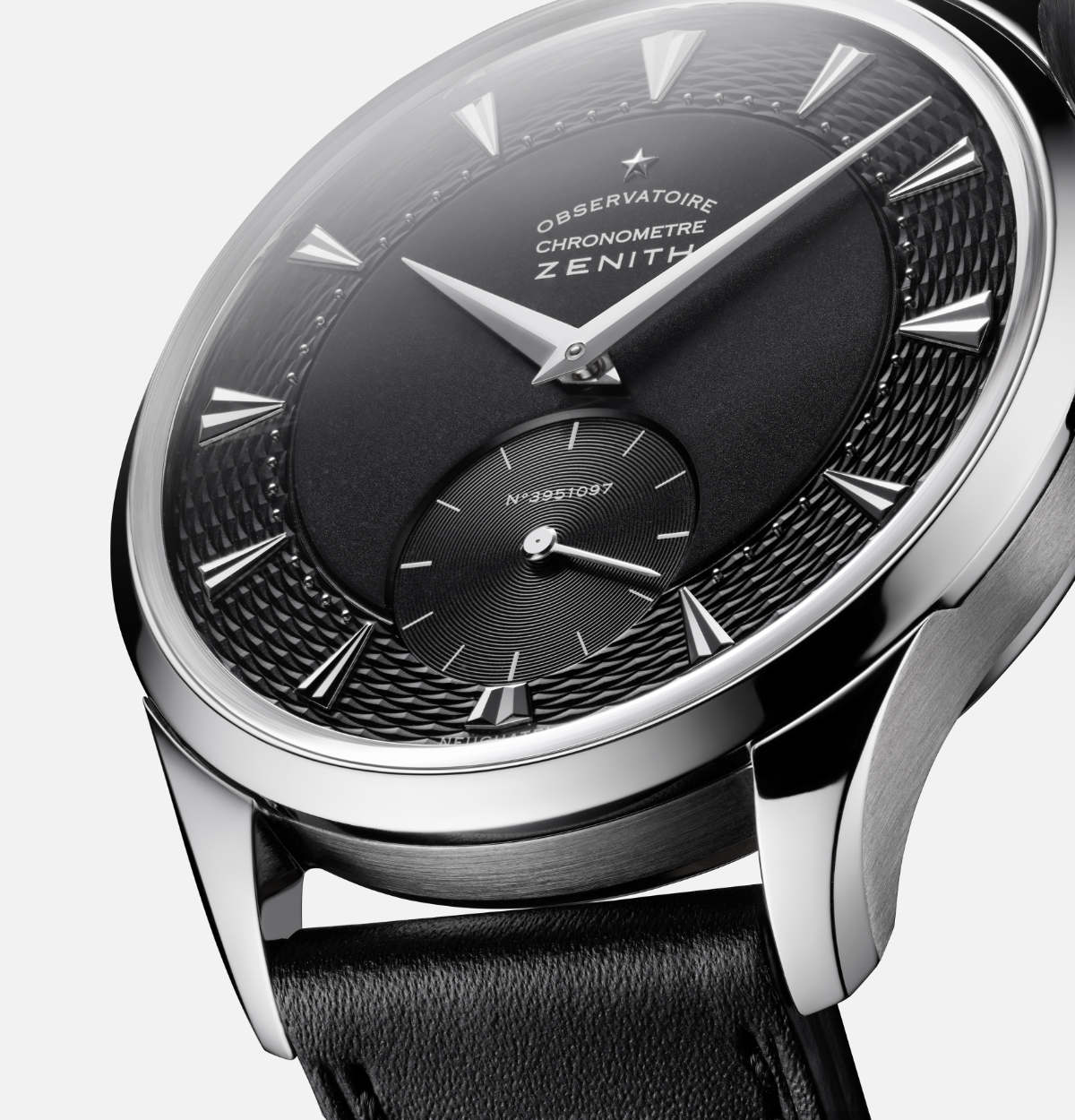 A monumental collaboration in watchmaking is born. ZENITH makes its most awarded movement from the golden age of chronometry competitions available to acquire for the first time ever. An idea initiated by Phillips’ Aurel Bacs and Alexandre Ghotbi, with whom ZENITH had already worked with on unique pieces and exclusive editions, Phillips in Association with Bacs & Russo invited renowned independent watchmaker Kari Voutilainen to restore and hand-decorate a batch of ZENITH Calibre 135-O movements, all of which took part and won in observatory chronometer competitions. The result is a contemporary chronometer produced in a series of 10 pieces and sold exclusively by Phillips in association with Bacs & Russo.

In a privatized cinema in Geneva, guests were invited to journey back in time to the 1950s and back with the premiere of a short film that recounts the tale of this extraordinary collaboration. The story begins during the last great decade of observatory chronometer competitions, an era of watchmaking that’s brimming with creativity and the pursuit of chronometric perfection. It is during this decade that ZENITH solidified its reputation as a preeminent maker of precision chronometers with the Calibre 135-0, the most highly awarded observatory chronometer ever made. Seven decades later, Phillips auction house, whose expertise in the field of rare and sought-after vintage pieces of historical significance as well as modern artisanal watchmaking is unmatched, proposes a new kind of challenge for ZENITH: To work with one of the most highly esteemed living independent watchmakers in order to restore and decorate a handful of Calibre 135-O movements that actually took part in and won observatory chronometer competitions, and to house them in a totally new watch that is at once historically inspired and contemporarily singular.

On the genesis of this one-of-a-kind collaborative effort, ZENITH CEO Julien Tornare shared, “I’ve known Aurel Bacs and Alexandre Ghotbi for years. We’ve had discussions about ZENITH’s patrimony and what were the hidden treasures that remained to be uncovered. Specifically, they asked about the Calibre 135. Then I had the idea, why don’t we collaborate with Phillips to create a special series around this movement? The beauty of having such a rich patrimony as ZENITH’s is to share it.”

“Wouldn’t it be great to do a sort of super limited edition with Calibre 135?” recounted Aurel Bacs. “Julien and Romain (Marietta, Head of Product & Heritage at ZENITH) came back to us and said ‘guys, we have a surprise for you.’ But who would’ve thought that they would come with the real, observatory tested, sort of Formula 1 winning movements? This is how it all started.” 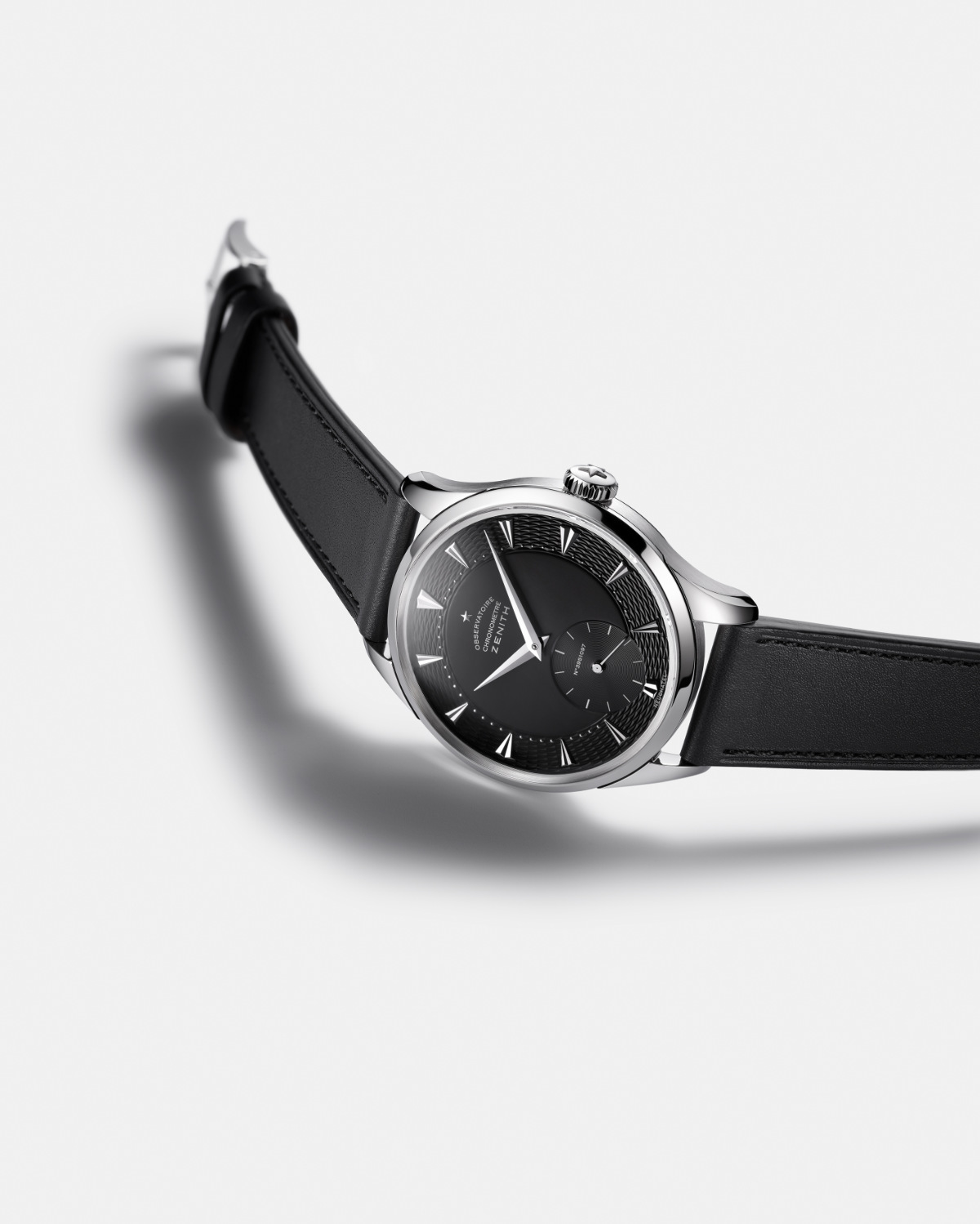 ZENITH’s contribution to the world of precision chronometry is nothing short of inspirational. Ever since its foundation in 1865 and right up until today, the Manufacture has never veered from its pursuit of precision. One area where ZENITH excelled was in observatory chronometer competitions, having amassed more awards than any other watchmaker with well over 2’330 chronometry prizes to its name. In the mid-20th century, one movement outshone all others during the golden era of observatory chronometer competitions and reigned supreme: the Calibre 135-O.

Developed from 1945 onwards by Ephrem Jobin, the Calibre 135 was produced from 1949 until 1962 in two distinct versions: a commercial variant, and a second iteration made solely for taking part in chronometry competitions at the Observatories of Neuchâtel, Geneva, Kew Teddington, and Besançon. These "O" movements, which were never commercialized nor cased in wrist or pocket watches, underwent exhaustive testing through drastically different temperatures, shocks and running in 6 different positions, consistently delivered optimal chronometric performance with minimal variations in rate. With over 230 chronometry prizes, the Calibre 135-O holds the most awards of any observatory chronometer calibre in the history of watchmaking.

The 10 movements chosen for this very limited edition belong to the "serial winning" years from 1950-1954, when the 135-O won the competition 5 years in a row – an unheard of and unmatched feat. They were prepared for the competitions and fine-tuned yearlong by the Zenith Laboratoire de Chronométrie. All 10 movements were awarded prizes within the 1st category range and had all been regulated by celebrated Zenith chronométriers Charles Fleck & René Gygax, who worked on the prize-winning movements five years in a row and bolstered Zenith’s reputation as an undisputed leader in precision chronometry. 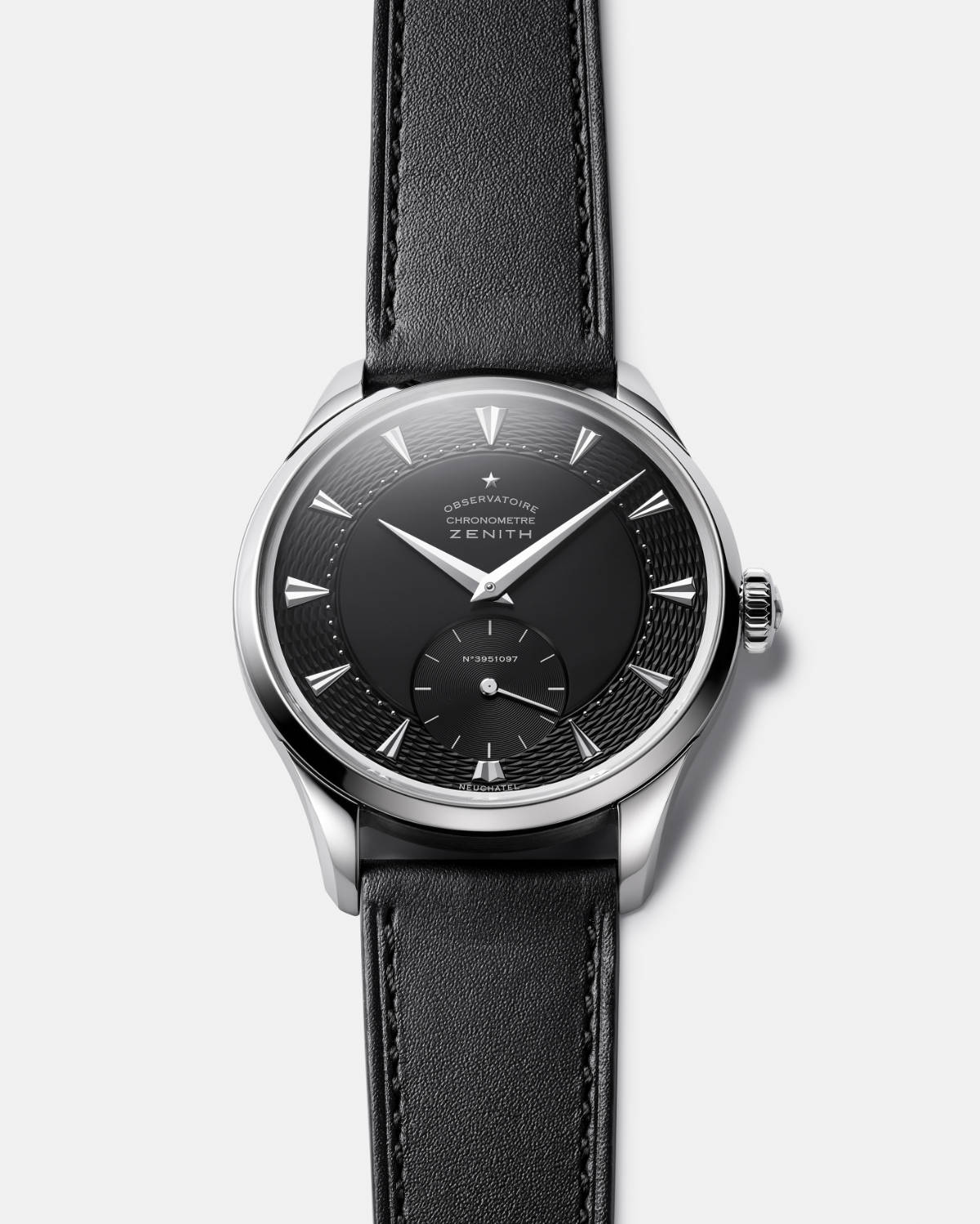 Tasking Kari Voutilainen with the restoration and finishing of these historical movements elevated them from raw competition pieces to haute horlogerie creations of the highest order. Alexandre Ghotbi affirmed, “These calibres were made for competitions. They were not made to be worn or to be aesthetically pleasing. So, if we’re going to make a wristwatch out of this legendary calibre, who should we ask to take it to the next level? Immediately we said, Kari Voutilainen. He’s an absolute master”.

True to its original era, the Calibre 135 Observatoire is inspired by past commercial wristwatch versions of the Calibre 135, yet unlike anything ever made in the past, the Observatoire Limited Edition draws inspiration from several 1950s references by combining the most emblematic details with contemporary accents. The 38mm platinum round case features tapered lugs that seamlessly fit under the bezel, as well as an oversized notched crown emblazoned with the modern Zenith star logo.

Beneath the sapphire glass box, the slightly domed black dial in sterling silver by Kari Voutilainen’s Comblémine atelier features guilloché engraving in a fish-scale motif. Triangular hour markers and applied polished dot markers in rhodium-plated German silver and solid gold hands are juxtaposed in a blend of vintage elegance and contemporary opulence. The oversized second counter at 6 o’clock is inscribed with the movement’s serial number, denoting the unique nature of each of these watches and how each was thoroughly regulated by revered chronométriers Charles Fleck or René Gygax, then passed on the supremely skilled hands of Kari Voutilainen and his dedicated team of artisan watchmakers. The dial is signed "Neuchâtel" at the bottom, as Zenith, Kari Voutilainen and the historical Observatory where the Calibre 135-O competed and won during the golden years of chronometry competitions are all based in the Canton of Neuchâtel.

For the first time in the history of the Calibre 135 and certainly for the “O” variant, the observatory chronometer movement that has been impeccably decorated and finished by Kari Voutilainen is visible through a sapphire display back. Cleaned and finished by the master restoration watchmaker, the aesthetic of the historical movement has been refined with hand chamfered and polished edges on the gold-coloured bridges, bevelled and polished screw-heads, circular graining on the main plate, snailed brushing on the ratchet and crown wheels and much more. 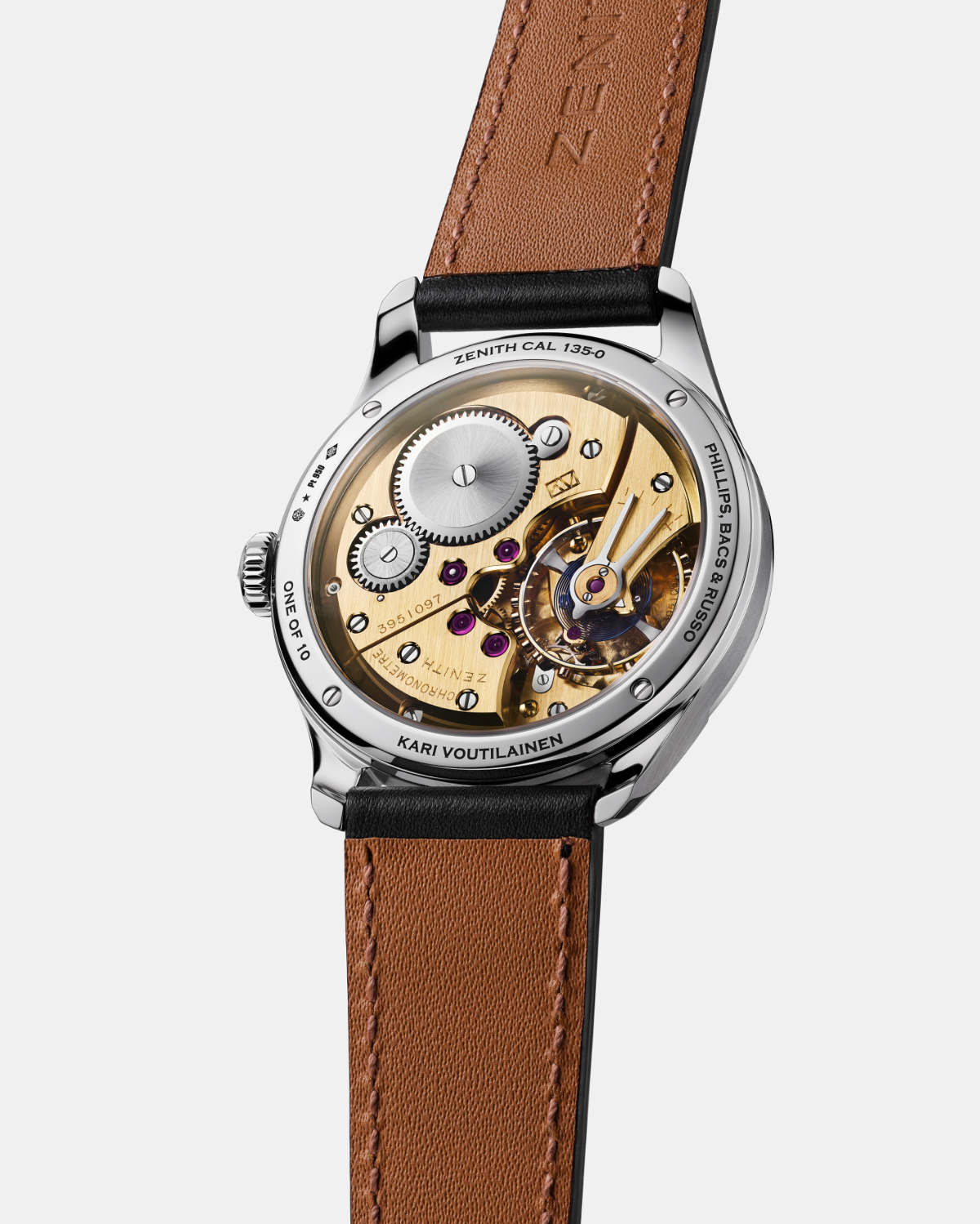 Carefully preserving the original regulation and fine-tuning of the movements by Fleck and Gygax while restoring and decorating the movements, Kari Voutilainen highlighted, “The persons working on these movements were the best watchmakers at the time. They had the know-how to make things precise. That precision doesn’t disappear after 70 years. Our duty was not to touch that performance.”

Perfectly fitting the historical context of this exceptional series, the Calibre 135 Observatoire is delivered in a wooden box crafted from walnut wood with brass fasteners, inspired by the containers in which the chronometry competition calibres were transported from the Zenith Manufacture to the Neuchâtel Observatory when competing for a first prize at the time. Secured within it is a book-shaped leather box containing the watch as well as the original historical wooden transport box for the movement.

A previously unheard-of collaborative effort that has drawn on many specific talents and expertise, the Calibre 135-O Observatoire celebrates not only ZENITH’s legacy as a maker of some of the most precise chronometers known to mankind, but also the spirit of Neuchâtel artisanal watchmaking and the art of restoration and superlative decoration. Sold exclusively by Phillips. 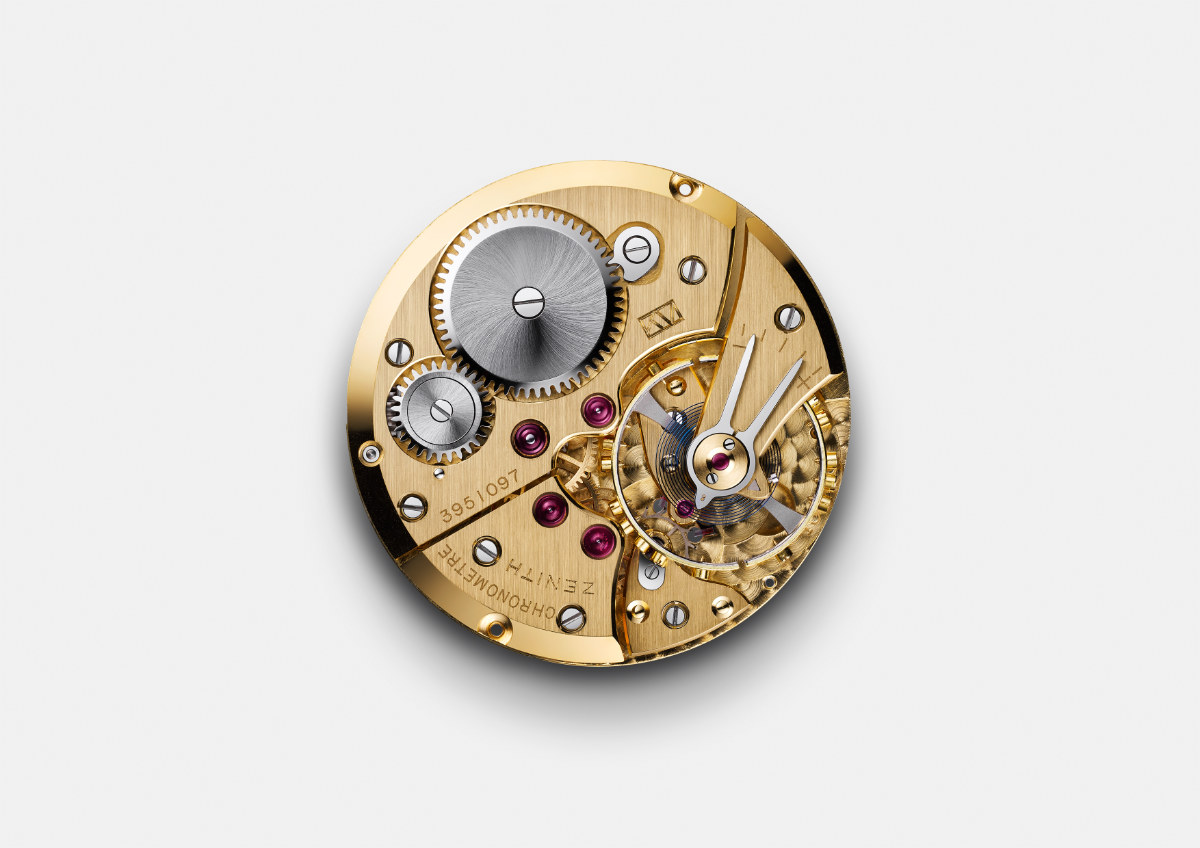 ABOUT PHILLIPS IN ASSOCIATION WITH BACS & RUSSO

The team of specialists at Phillips Watches is dedicated to an uncompromised approach to quality, transparency, and client service, achieving a global auction sale total of $209.3 million in 2021, the most successful year for any auction house in watch auction history.

A selection of our recent record-breaking prices:

Phillips is a leading global platform for buying and selling 20th and 21st century art and design. With dedicated expertise in the areas of 20th Century and Contemporary Art, Design, Photographs, Editions, Watches, and Jewelry, Phillips offers professional services and advice on all aspects of collecting. Auctions and exhibitions are held at salerooms in New York, London, Geneva, and Hong Kong, while clients are further served through representative offices based throughout Europe, the United States and Asia. Phillips also offers an online auction platform accessible anywhere in the world. In addition to providing selling and buying opportunities through auction, Phillips brokers private sales and offers assistance with appraisals, valuations, and other financial services.

- Hours and minutes in the centre. Small seconds at 6 o'clock

- Meticulous traditional hand-finishing and decoration on the movement