Zenith continues to push the limits of performance and design to the extreme for the trailblazers who forge their own path and leave a mark on time with the DEFY EXTREME, an all-terrain 1/100th of a second chronograph. Zenith is also continuing to express the notion of high-frequency precision through light, colours and motion across the DEFY collection with a number of new highly chromatic creations. 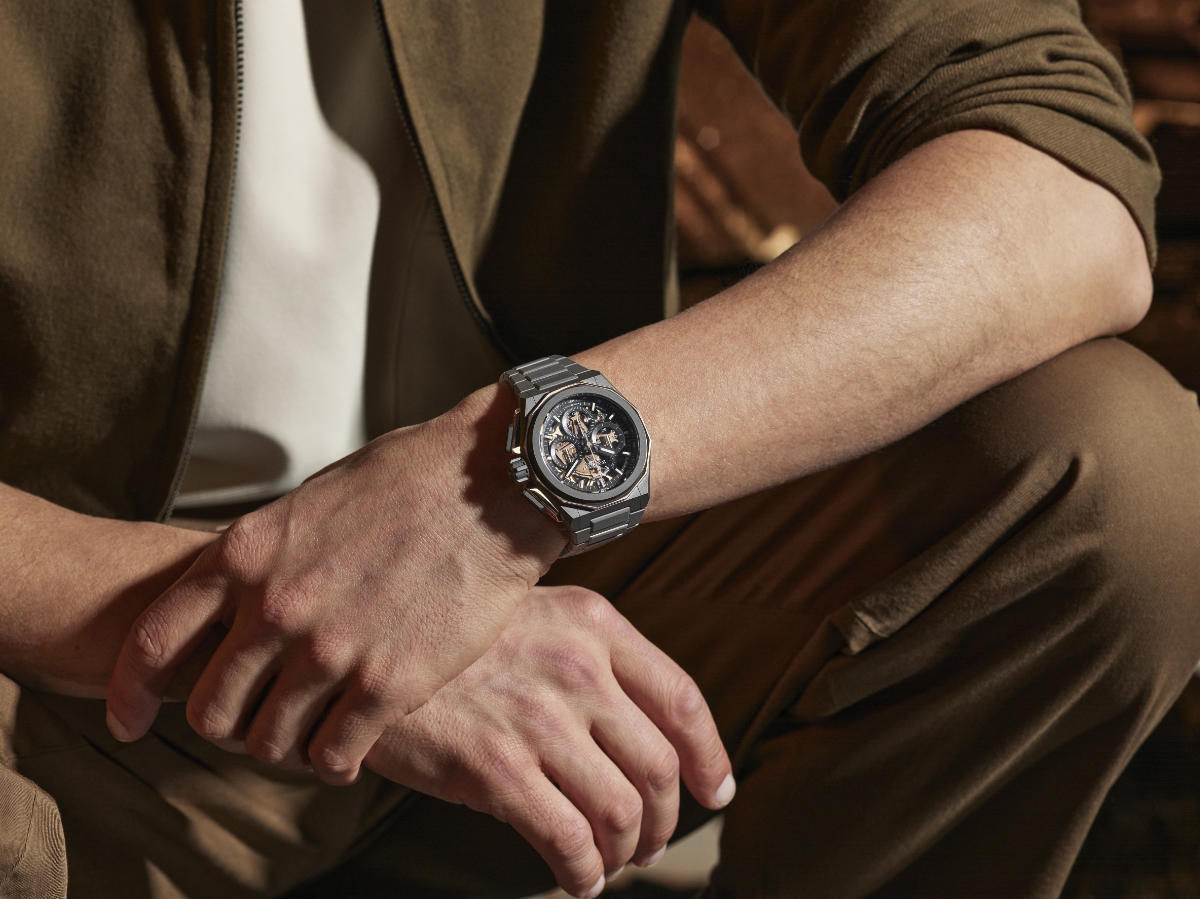 Zenith is pushing form and function to new heights in its DEFY collection of resolutely futuristic watchmaking with the DEFY Extreme, a new expression of superlative precision and ruggedness. This is the high-performance chronograph for those who forge their own path on the road less travelled and leave their mark.

The DEFY Extreme is essentially a supercharged DEFY, where the outlines and details are accentuated and further holistic details are masterfully integrated: A larger 45mm case with a water-resistance of 200 metres, sharper lines, more pronounced edges, and an overall silhouette that exudes robustness, resilience and a penchant for exploring new horizons. The design is reinforced by the addition of components protecting the pushers, and screw-down crown. One of the DEFY Extreme’s most striking elements is the twelve-sided ring placed under the bezel that extends down to the twelve-sided case back; reminiscent of the DEFY A3642 from the 1960s and its faceted bezel. The interplay between materials and their finishes serves to add another dimension of modernity. The matte titanium and matte titanium with rose gold versions feature an entirely matte-finished microblasted surface for a monolithic look, while the titanium version with blue accents is finished to bring out the different facets of the metal with polished, satin-brushed and matte surfaces.

Zenith continues to push the limits of performance and design to the extreme for the trailblazers who forge their own path and leave a mark on time with the DEFY EXTREME.

The dial of the DEFY Extreme has been conceived in a way to enhance legibility while allowing a clear view of the groundbreaking 1/100th of a second chronograph calibre, with two escapements beating at 36’000 VpH for the timekeeping part and 360’000 VpH for the chronograph. Consisting of a transparent sapphire crystal, the dial features applied oversized and slightly overlapping chronograph counters that emphasize volume and legibility. The hands as well as the applied hour markers are also extra-large and filled with copious amounts of Super-LumiNova guarantee readability in the darkest situations. And to further enhance the tonality of the watch and the depth of the movement, the movements are coloured galvanically to match and complement their sturdy exterior: Black for the matte titanium, blue for the polished titanium and gold for the titanium and rose gold.

Because uncompromising performance in extreme conditions also means adapting to the environment around us, each DEFY Extreme comes with three different straps with quick strap-change mechanisms: A mircroblasted or polished and satin-brushed titanium bracelet, a rubber strap with a folding buckle matching the case and, a first for Zenith and the DEFY line, a Velcro® strap that can be easily and precisely adjusted on the go, with the textile material perfectly suited for any situation – and certainly not afraid of getting wet. Going beyond a simple cosmetic switch-up, each option offers different properties for a different wearing experience, perfectly adapted to its surroundings and the activities it takes on, no matter how extreme.

Zenith has found a most suitable setting for the DEFY Extreme collection, by becoming Official Timekeeper and Founding Partner of Extreme E, a new off-road electric racing championship. On this exciting new partnership, Zenith CEO Julien Tornare shared “Building a green and sustainable future is something very much at the core of what Zenith is doing today and the reason why we began the ZENITH IS GREEN initiative two years ago. We are absolutely thrilled to join Extreme E as its Official Timing Keeper and Founding Partner. It’s exciting to be at the start of what will undoubtedly become the future of off-road extreme racing, while also bringing environmental issues to the forefront. When we conceived the DEFY Extreme, this is exactly the kind of environment we envisioned for it: Innovative, off the beaten path and pushing the limits of performance to the extreme, where every millisecond counts and every racer can leave his mark.”

After coming together to drape the Zenith Manufacture in Le Locle with a unique work of art, Zenith and Felipe Pantone have collaborated in creating an object that is at once a feat exceptional watchmaking prowess and a piece of wearable kinetic art: the DEFY 21 Felipe Pantone.

Using the DEFY 21 1/100th of a second chronograph as his canvas, world-renowned contemporary artist Felipe Pantone reinterpreted it to incorporate his strikingly colourful aesthetic while playing with frequencies - visually and mechanically. To achieve his “visible spectrum concept”, where all the detectable frequencies of light and its refracted colours come into play with the highest-frequency chronograph in production, Zenith sought new solutions and technologies to make it a reality. This includes the “rainbow” PVD silicon coating applied for the very first time on a movement’s bridges, the intentionally distorted lightning-bolt central hour and minute hands filled with the same rainbow PVD treatment as the movement, and a moiré optical effect produced by fine alternating white and black bands using precise laser-engraving and lacquering techniques.

Introducing the Defy 21 Felipe Pantone, a highly chromatic and visually striking timepiece that brings a different notion of art to watchmaking.

Limited to 100 pieces and sold out within 24 hours of its commercial release, the DEFY 21 Felipe Pantone comes with a second iridescent rainbow-effect strap, as well as an artwork and certificate signed by the artist himself.

Zenith continues to highlight the concept of high-frequency precision through striking creations in its 1/100th of a second chronograph, the DEFY 21. This translation of high oscillation frequencies into single regions of the visible light spectrum began with the DEFY 21 Ultraviolet in 2020, which features the world’s first violet-coloured chronograph movement, standing out against the entirely muted case in matte microblasted titanium.  Now, Zenith applies the same striking effect in cool tones of deep indigo and electric blue in the DEFY 21 Ultrablue.

Zenith continues to highlight the concept of high-frequency precision through striking creations in its 1/100th of a second chronograph, the DEFY 21.

The partially open dial features slightly overlapping closed chronograph counters, finished in a grey tone matching the deep grey of the case with contrasting white markings for legibility. The vividly blue movement is accentuated by the DEFY 21’s uniquely avant-garde movement conception and design with open and angular bridges. A white-tipped central 1/100th of a second chronograph hand makes a complete revolution above the dial in one second.

Zenith has taken an unexpected and novel approach when it comes to colourful watches with the bejewelled DEFY 21 Spectrum series. Whether it’s the coloured chronograph movements achieved through innovative pigmentation processes or the natural brilliance and hue of precious stones, the DEFY 21 Spectrum is exploring the notion of high-frequency precision in a vivid and precious manner.

Aptly named Spectrum after the range of colours produced by the different wavelengths of visible light, this collection of dazzling DEFY 21 pieces consists of five models that take on different frequencies of visible light. The common element across these five models is the 44mm stainless steel case, which has been entirely embellished with 288 brilliant-cut white diamonds. Each version features a bezel set with 44 baguette-cut precious stones, with matching coloured movements and rubber straps: green tsavorites for the green edition, orange sapphires for the orange edition, blue sapphires for the blue edition, amethyst for the purple edition, and black spinels for the black edition. Each version is limited to 10 pieces.

Zenith continues to express the theme of high-frequency chronometry through light and colours in the scintillating DEFY 21 Spectrum bejewelled collection.