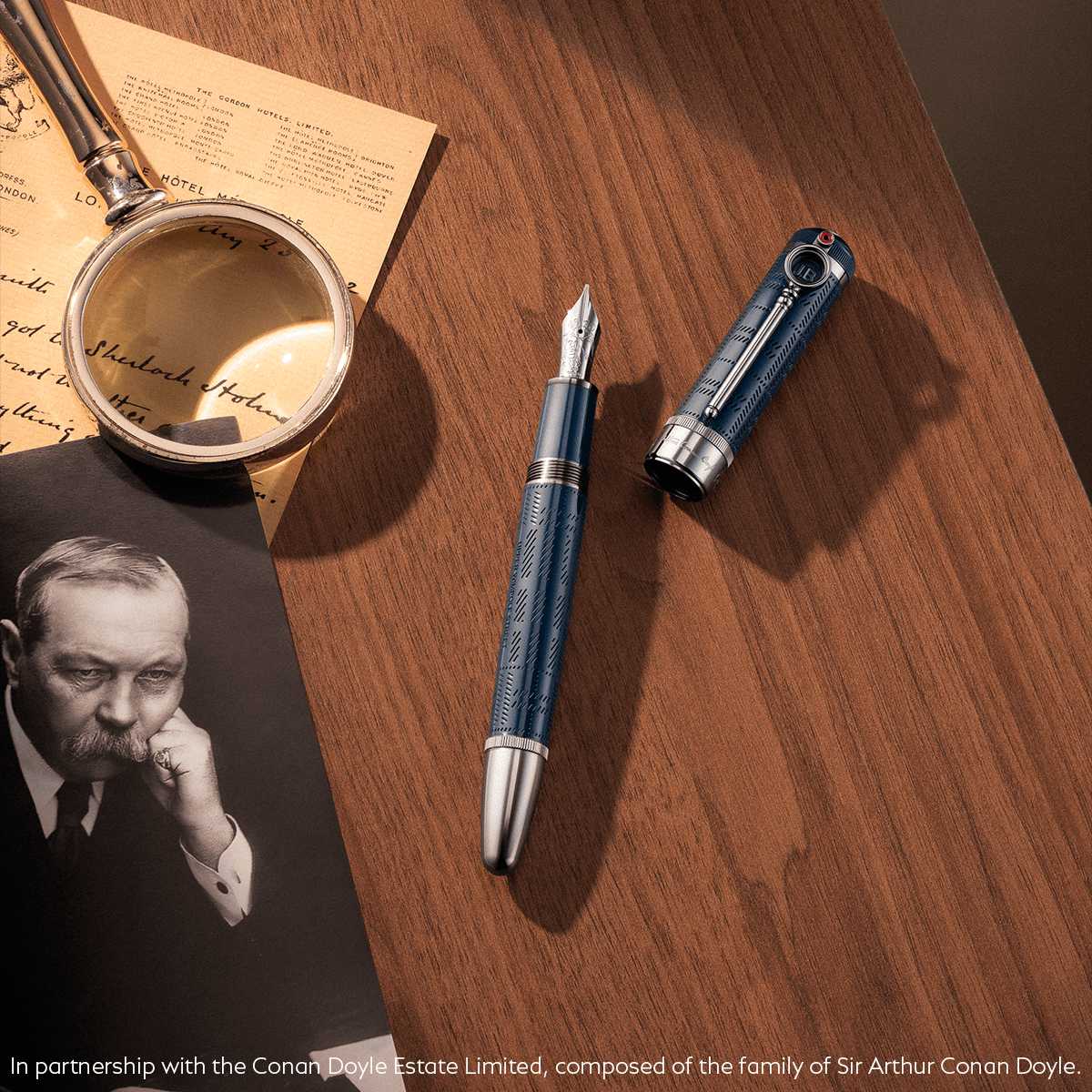 A homage to the literary legacy of one of the most influential writers of the 19th and 20th centuries and creator of Sherlock Holmes, the world’s most famous detective.

With its Writers Edition, Montblanc pays tribute to the creativity and cultural influence of some of the world’s greatest literary figures. Among those great writers is Scottish-born Sir Arthur Conan Doyle (1859-1930), best known for the 60 stories he wrote about Sherlock Holmes, the beloved fictional consulting detective. While Doyle trained in medicine and practiced as a doctor, his passion for storytelling produced a body of work that includes nearly 200 novels, short stories, poems, historical books as well as pamphlets. His spirit of adventure and exploration took him to faraway places including the Arctic and Africa where he volunteered as a doctor during the Boer War, writing a chronicle that decried the shortcomings of the British forces, and earned him a knighthood from King Edward VII for services rendered to the Crown. Later in life, he turned his focus to spiritualism, becoming one of the movement’s most ardent supporters. 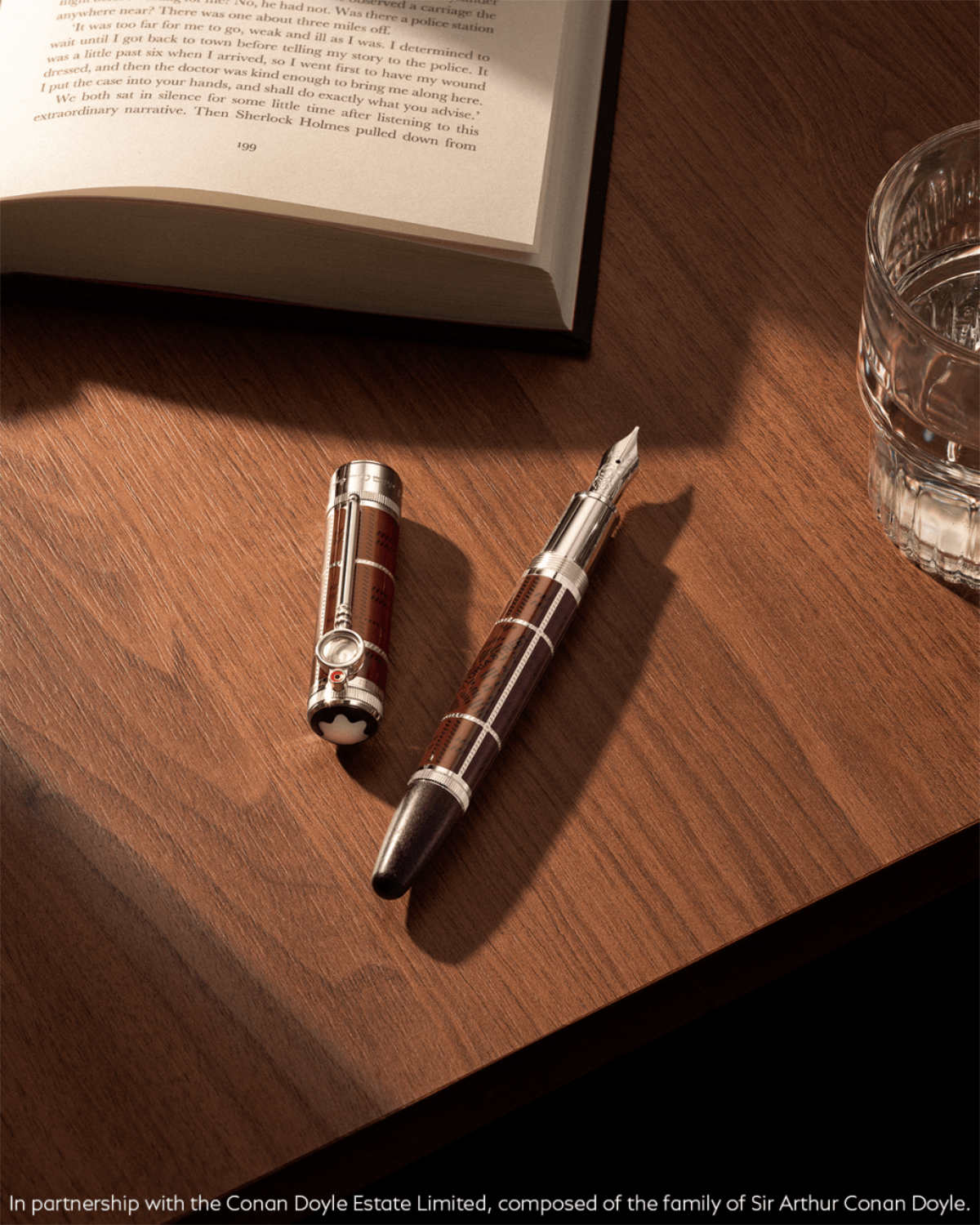 The new Montblanc Writers Edition Sir Arthur Conan Doyle collection is inspired by the many tales of Detective Sherlock Holmes and the extraordinary life of his originator with design details telling the stories that have captivated readers for generations. Known as one of the essential instruments of any detective solving a crime or mystery, the clip on each of the editions is shaped like a magnifying glass in homage to the great Sherlock Holmes. The exceptional author´s likeness can be found engraved on every nib on each of the four editions that make up the collection, accompanied by a special story element from the theme of the respective edition. 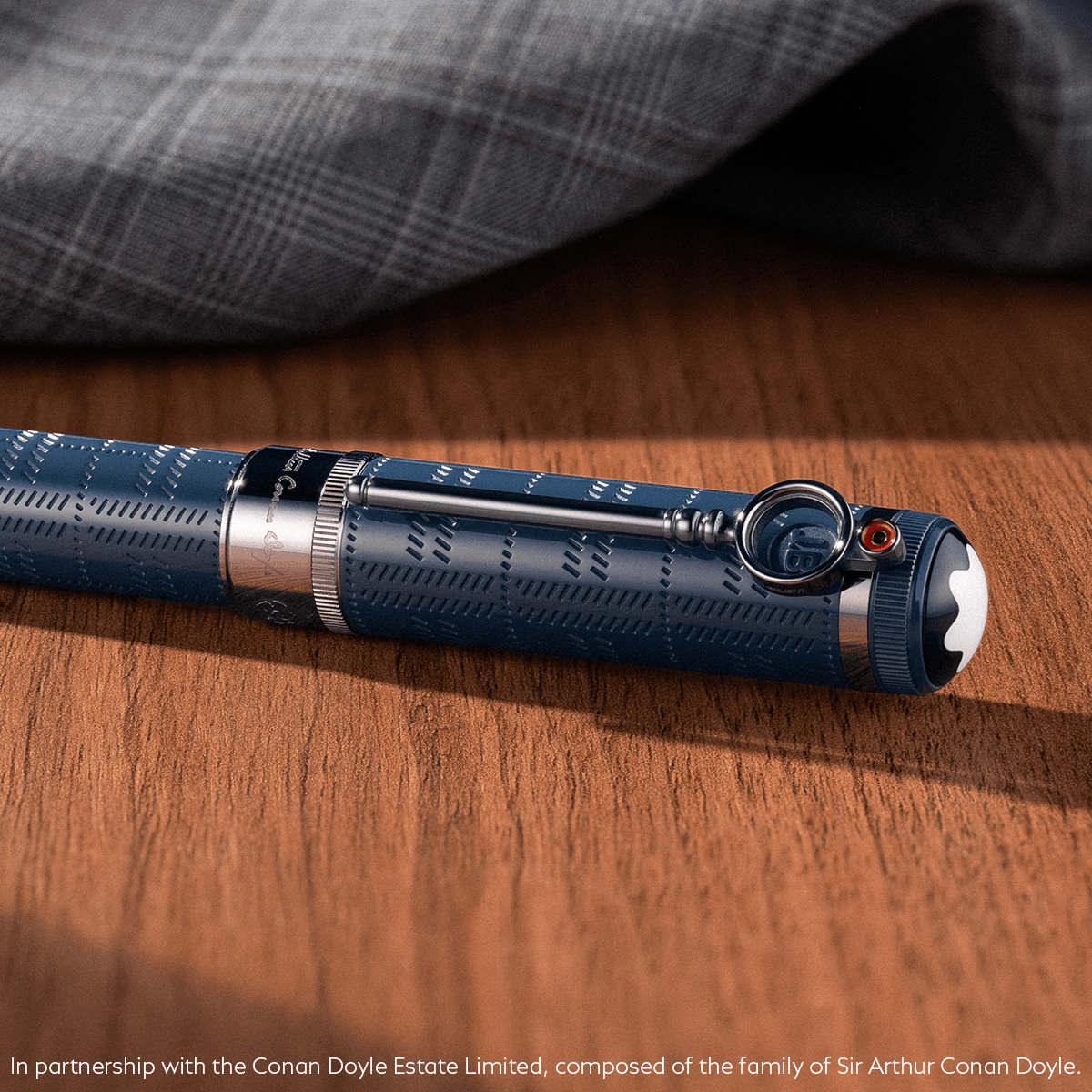 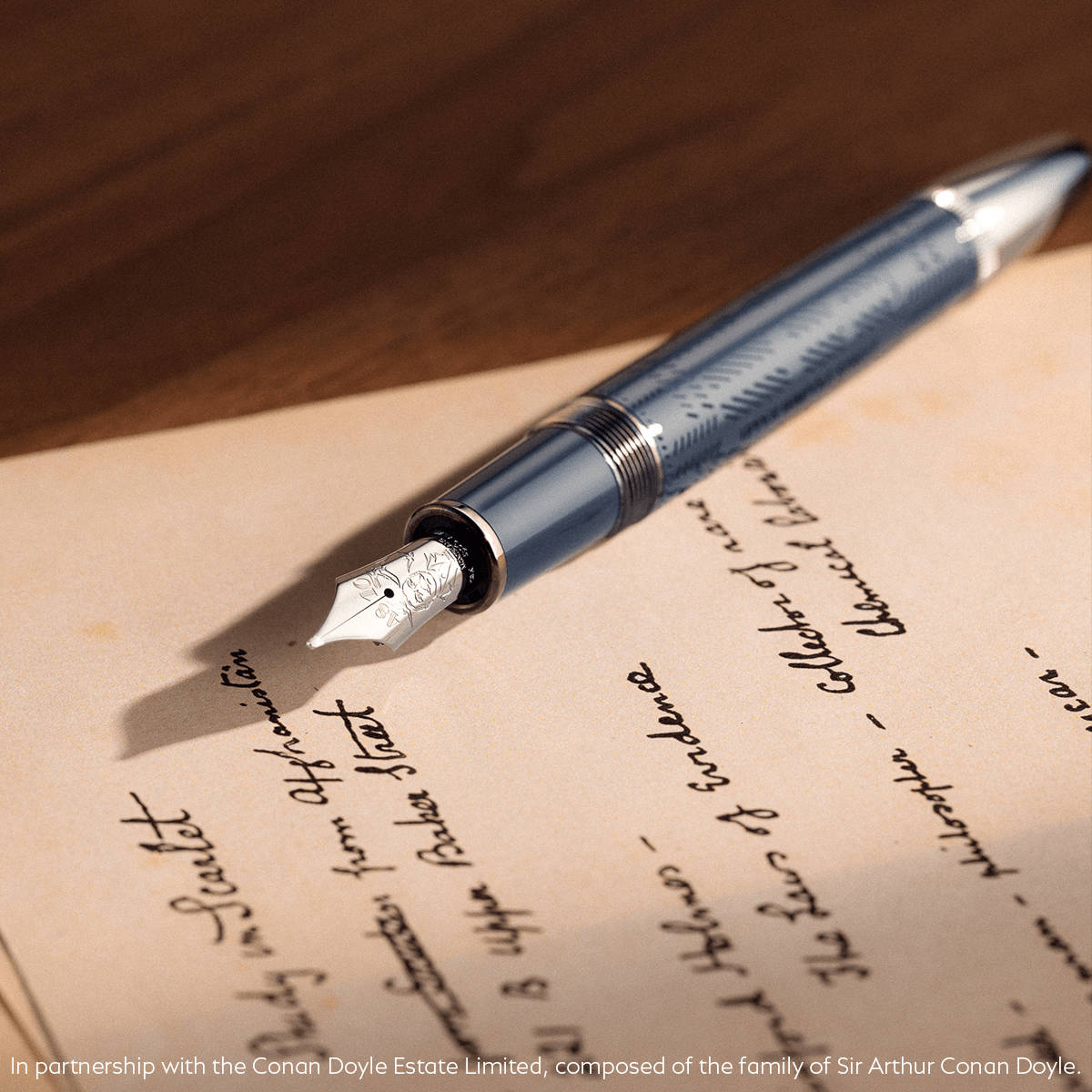 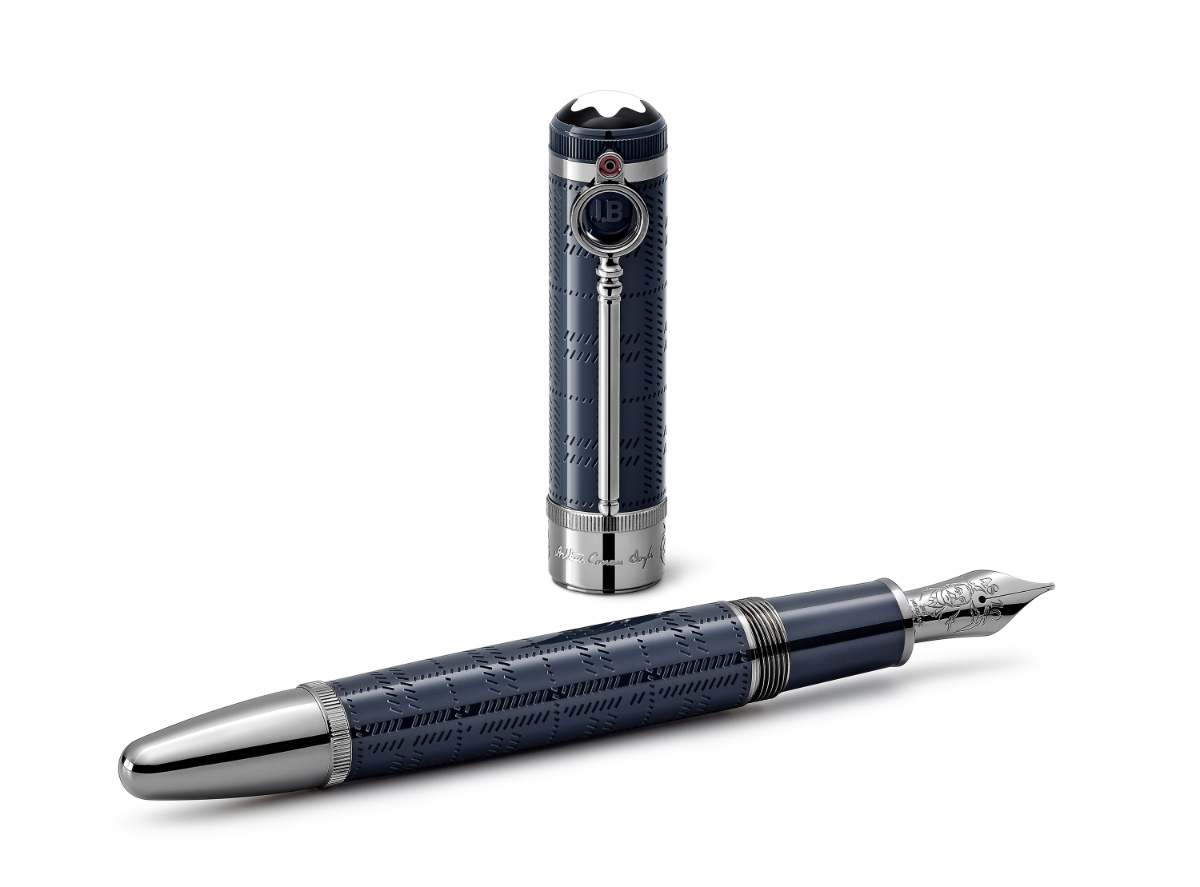 Made from precious resin with ruthenium coated fittings, the cap and barrel of the Writers Edition Sir Arthur Conan Doyle are decorated with a pattern based on an original Sherlock Holmes tartan. as well as excerpts from an old street map of Victorian London, spotlighting “Upper Wimpole Street” where Doyle had his medical practice, and “Baker Street”, the residence of Sherlock Holmes. The dark grey tone of the resin evokes the dark foggy streets of London often described in Sherlock Holmes mysteries. 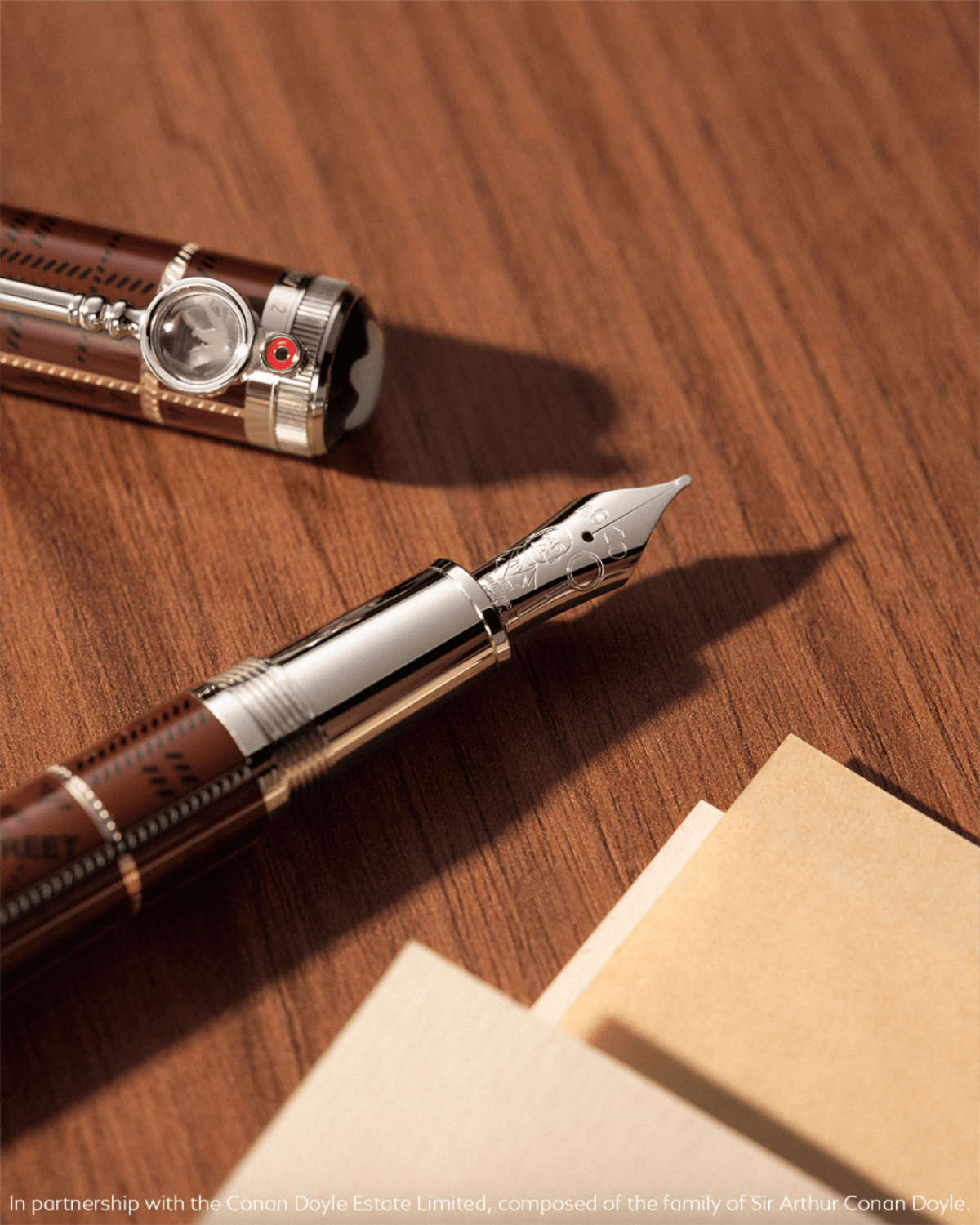 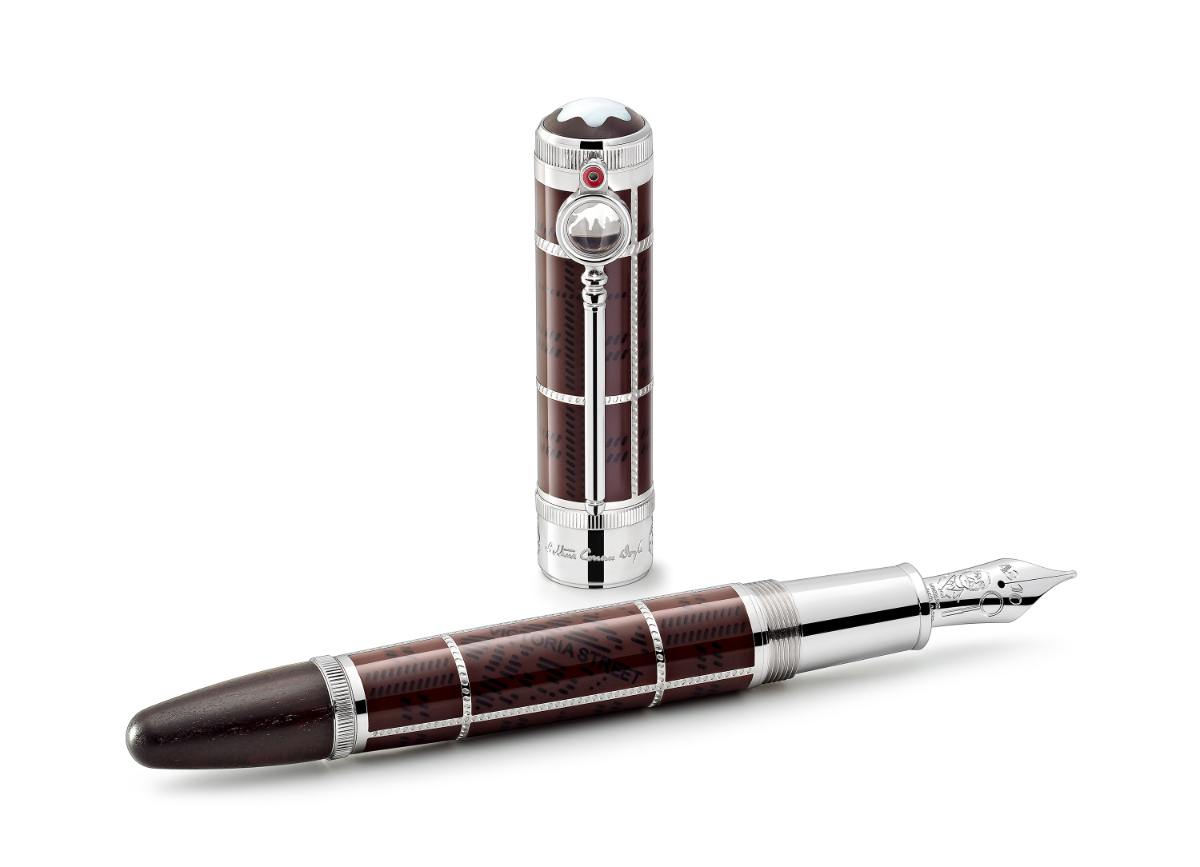 A tribute to the stories of Sherlock Holmes in a dark brown lacquer that recalls the detective’s pipe, the limitation number of 1,902 Fountain pens and 1,902 Rollerballs for the Writers Edition Sir Arthur Conan Doyle Limited Edition 1902 is a reference to the first publishing date of The Hound of Baskervilles, one of the most famous of the Sherlock Holmes novels. 1902 also happens to be the year Doyle was knighted by the King.

Cap and barrel in brown lacquer feature the London street map with “Victoria Street” where Doyle´s Psychic bookshop was located, and “Baker Street”, the residence of Sherlock Holmes, as well as the tartan pattern. 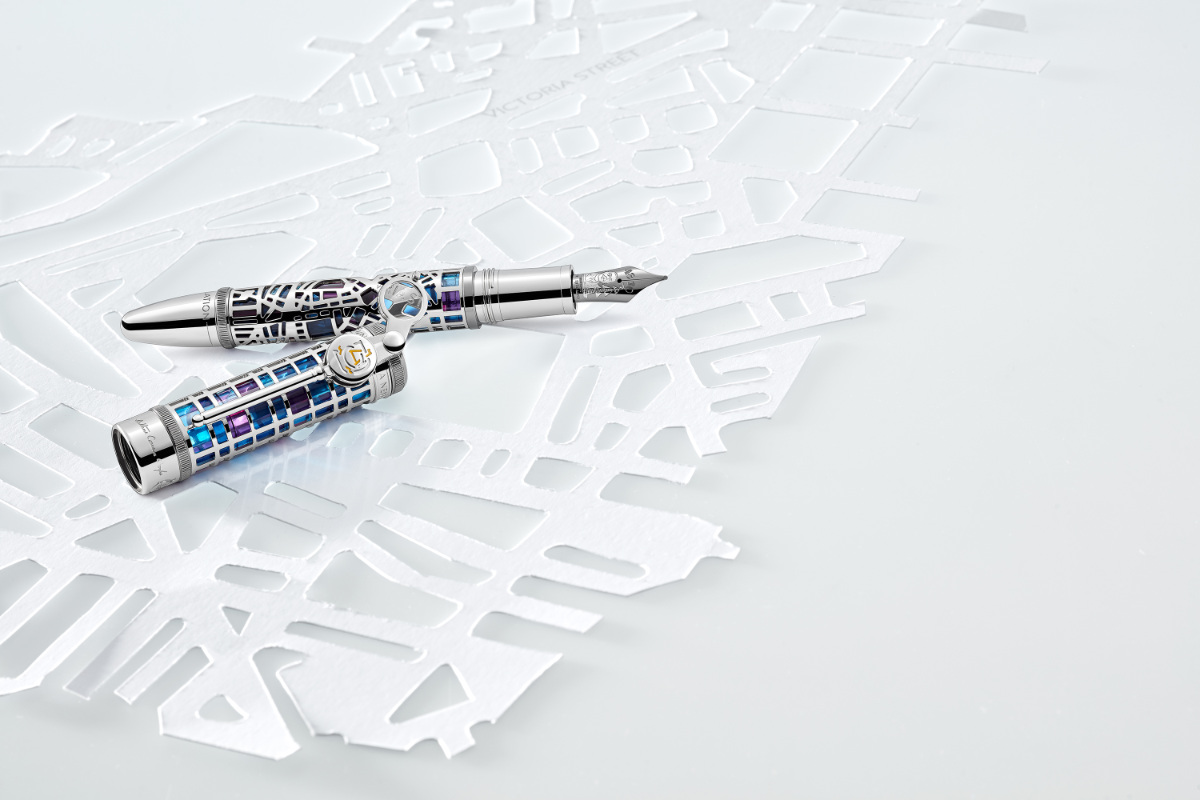 The limitation number of the Writers Edition Sir Arthur Conan Doyle Limited Edition 97 is a reference to 1897, the year Sir Arthur Conan Doyle’s House “Undershaw” in Surrey was completed. It was in this family home that the writer penned many of his most important works including The Hound of Baskervilles. The edition features an Au 750 solid white gold skeletonized overlay on different translucent lacquer fields inspired by the stained-glass windows at Undershaw. 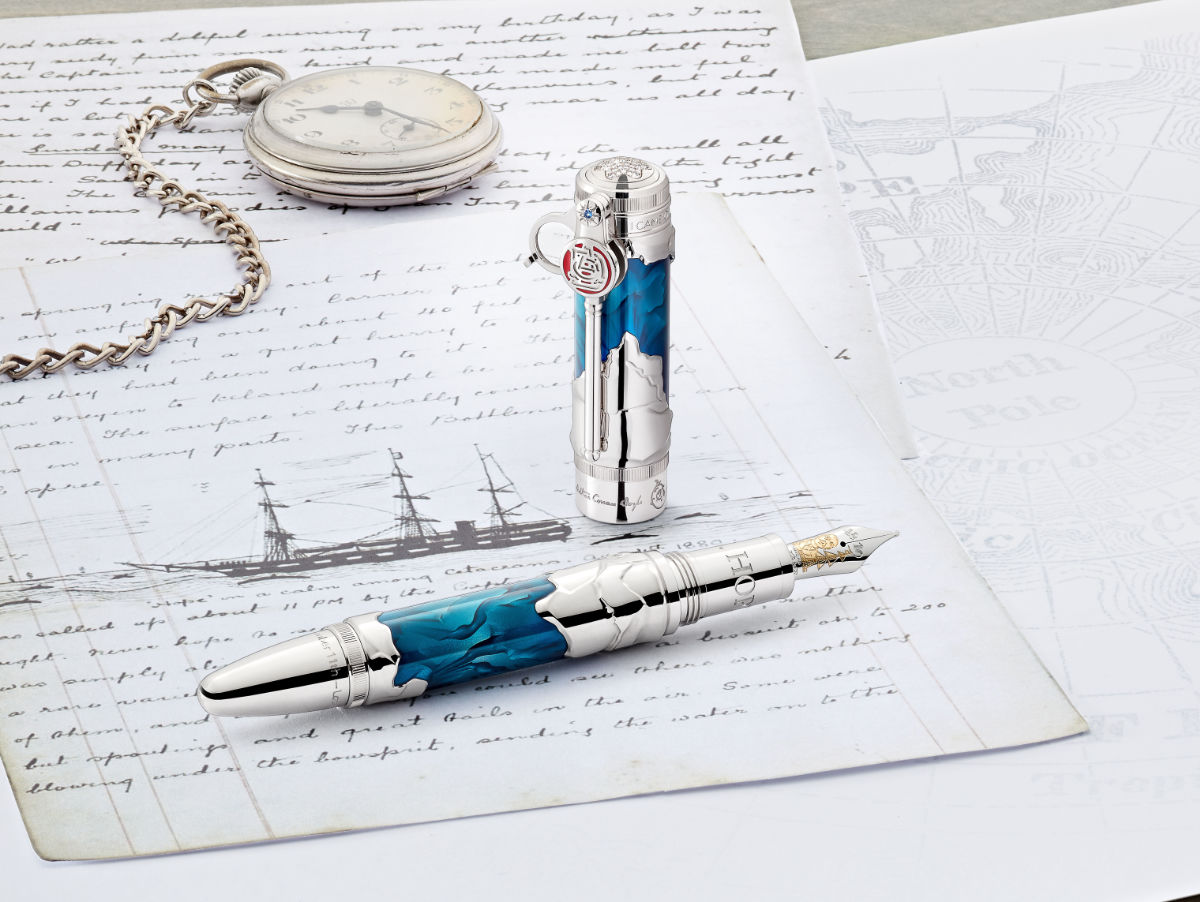 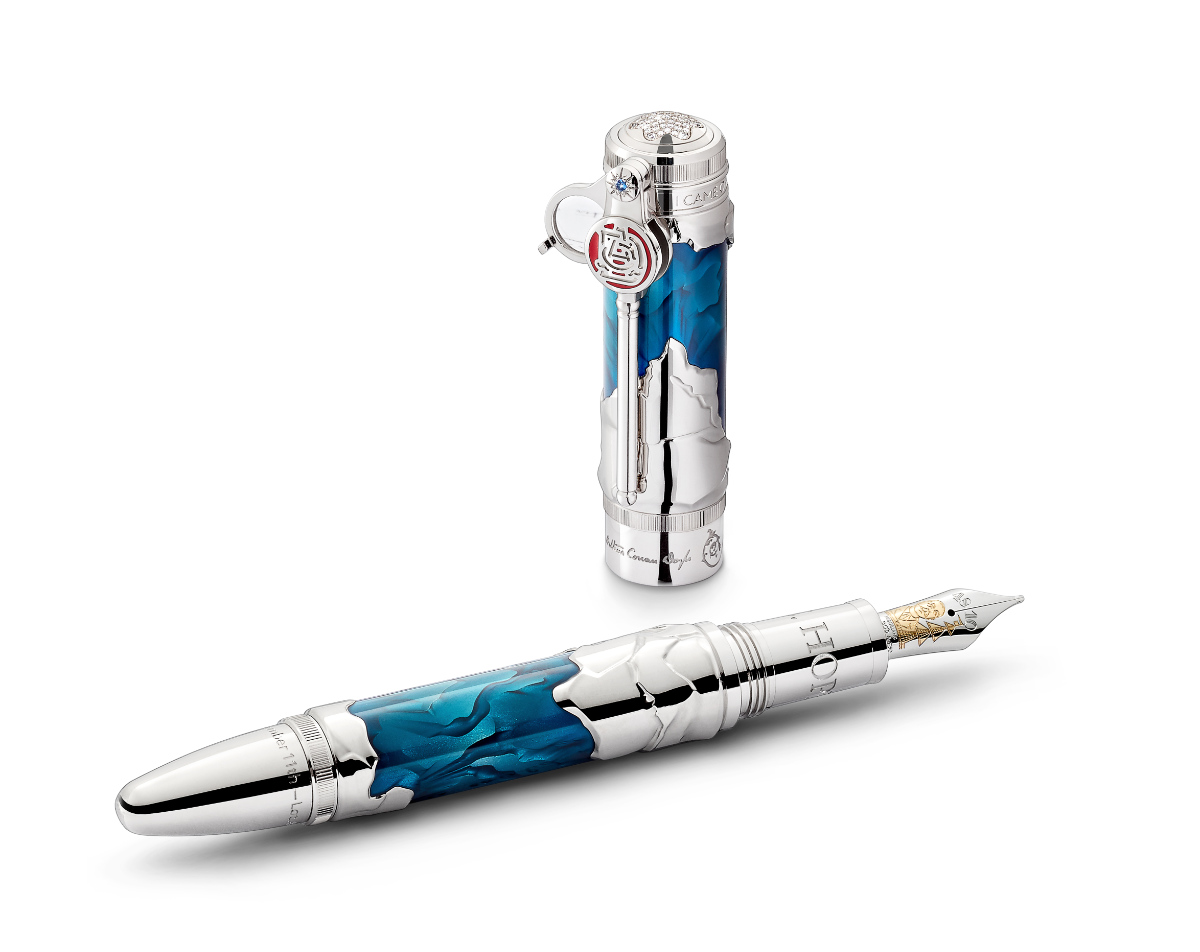 Doyle experienced the spirit of exploration early in his life when at just 20 years old, he was offered the post of ship’s surgeon on a whaling boat setting sail for the Arctic Circle. The cap and barrel of the Writers Edition Sir Arthur Conan Doyle Limited Edition 8 are adorned with 3-dimensional icebergs in solid Au 750 white gold, surrounded by translucent blue lacquer reminiscent of the icy waters of the Artic.

To complete the tribute to the great Sir Arthur Conan Doyle, Montblanc is introducing a selection of matching writing accessories. A fine stationery notebook made from woven velvet featuring a street map of London and Sir Arthur Conan Doyle´s signature. A matching red ink colour in a glass ink bottle is inspired by the first Sherlock Holmes novel A Study in Scarlet. A single leather pen pouch embossed with a street map of London and tartan pattern completes the assortment. 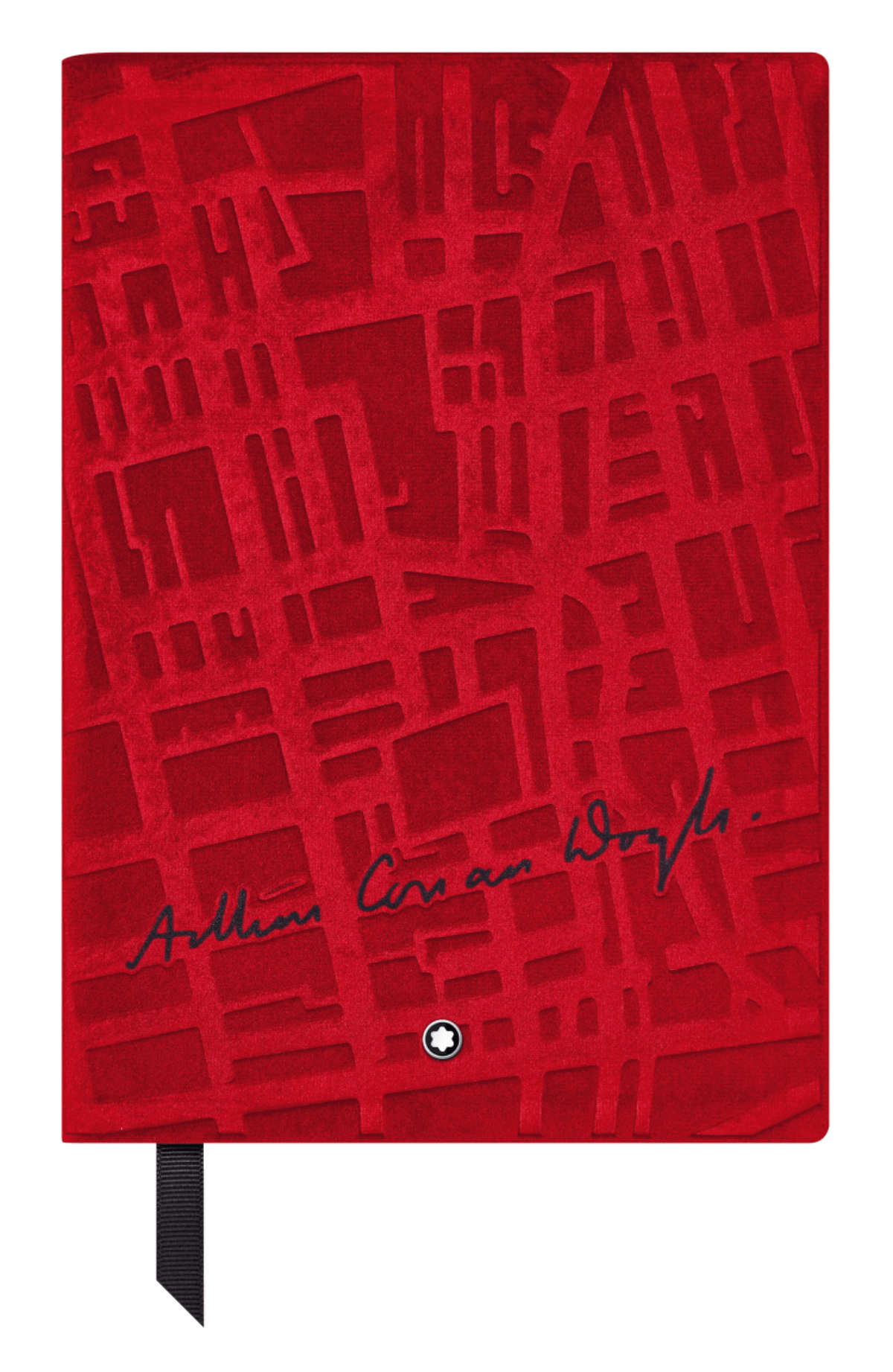 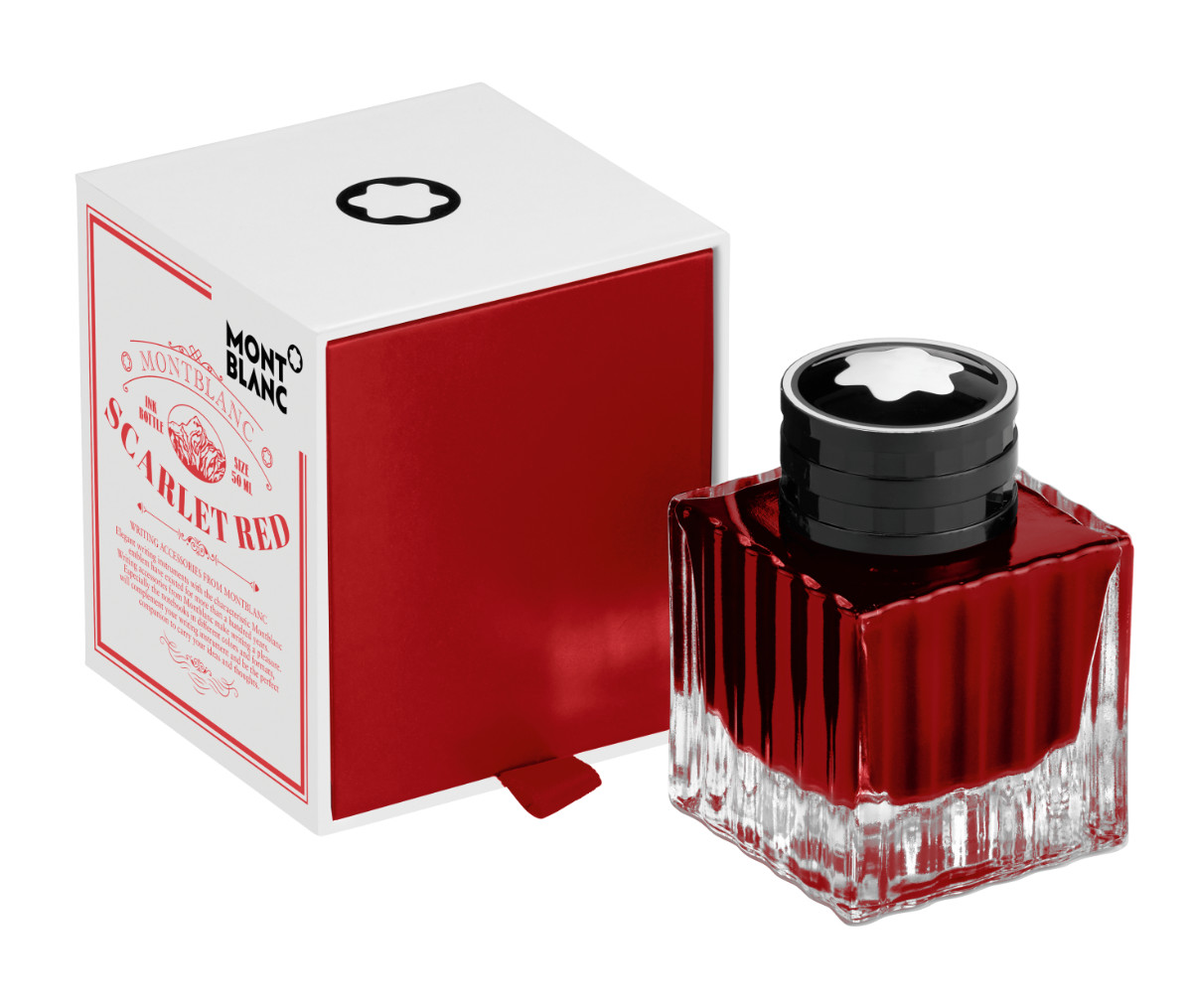