A writing tribute to the great pioneer and visionary founder of the prestigious Ferrari automobile marque.

With its latest Great Characters Edition, Montblanc pays tribute to the life and legacy of Enzo Ferrari, the Italian motor racing driver, entrepreneur and founder of the Scuderia Ferrari, and subsequently of the Ferrari automobile company. The same passion for craftsmanship and innovation that defines the Ferrari brand has been applied in Montblanc’s atelier to create three different writing instrument editions that tell the story of an exceptional racing champion and engineering maverick who led his company to unparalleled prestige and created a legend that lives on. Ferrari racing cars are more decorated than any other marque, having participated in every Formula One World Championship since the first season in 1950. Under the leadership of Enzo Ferrari, the Scuderia Ferrari team brought home 9 Drivers’ Championships and 8 Constructors’ Championships, making it the most successful team in Formula One to date. 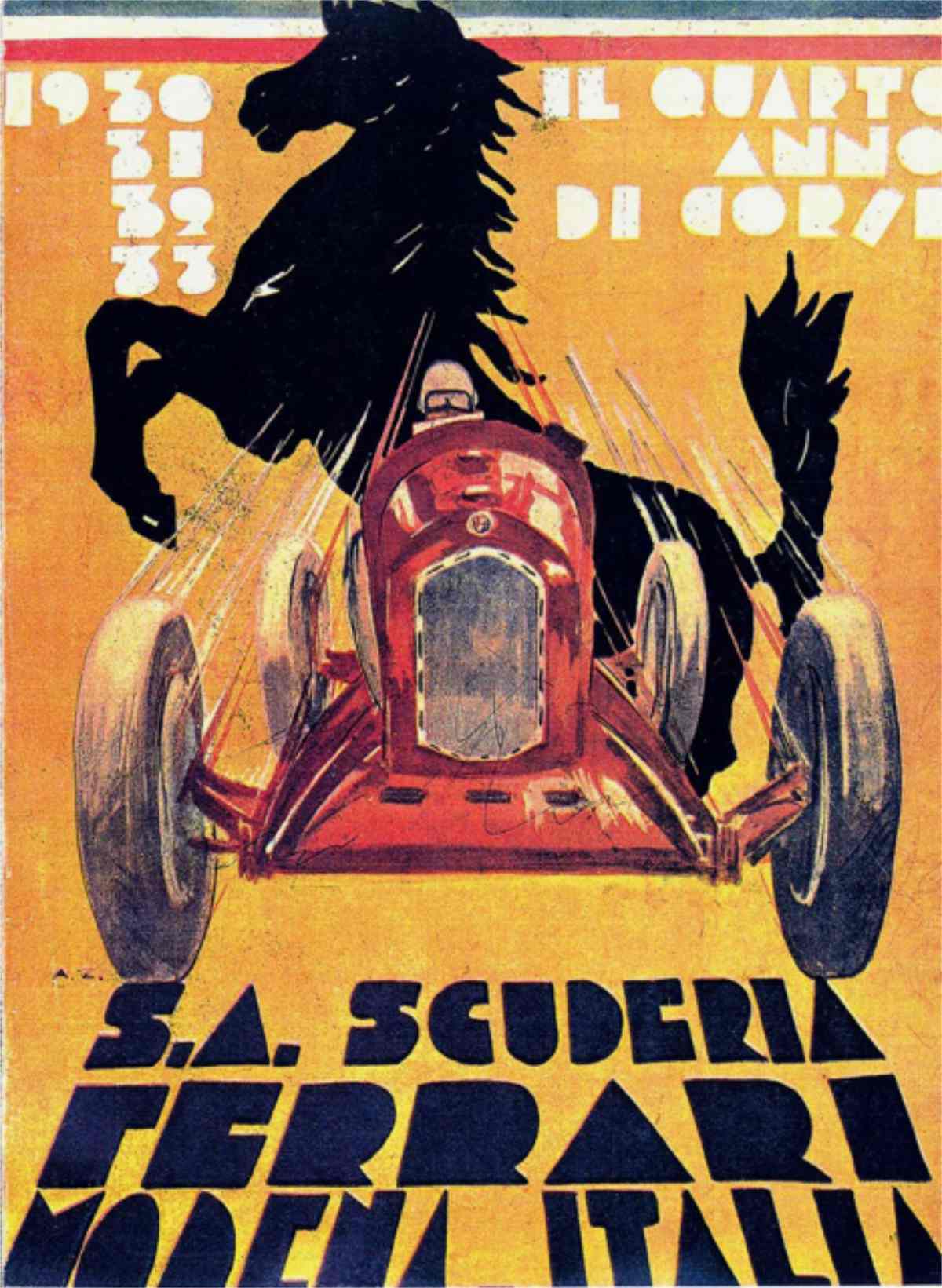 Race for speed and innovation: The story of Enzo Ferrari

Born on 18th February 1898 in Modena, Italy, Ferrari developed a passion for automobile racing as a young boy after attending a number of races with his father.

On 17 June 1923, the 25-year-old Ferrari, by now a driver for Costruzioni Meccaniche Nazionali, won his first race at the Circuito del Savio in Ravenna. In the following year, 1924, Enzo Ferrari won first place three times, and by the end of his racing career, he had participated in over 40 races – often claiming one of the top places. However, Enzo Ferrari wanted to be more than a racing driver. His professional training as a constructor perfectly prepared him to found his own racing team, Scuderia Ferrari, in 1929.

In 1947, the first car built under the Ferrari marque in the company’s Maranello factory was the 125 S, a 1500cc 12-cylinder engine car that went on to win the Rome Grand Prix that year. By the late 1950s, the Ferrari brand was famous all over the world with sales more than tripling between 1950 and 1960, leading to Enzo Ferrari implementing a series of changes to accelerate the growth of the company and the production of new models in the 1970s. Enzo Ferrari, who spent a reserved life, and rarely granted interviews, died on August 14, 1988, in Maranello at the age of 90, leaving behind him one of the most admired automotive legacies. 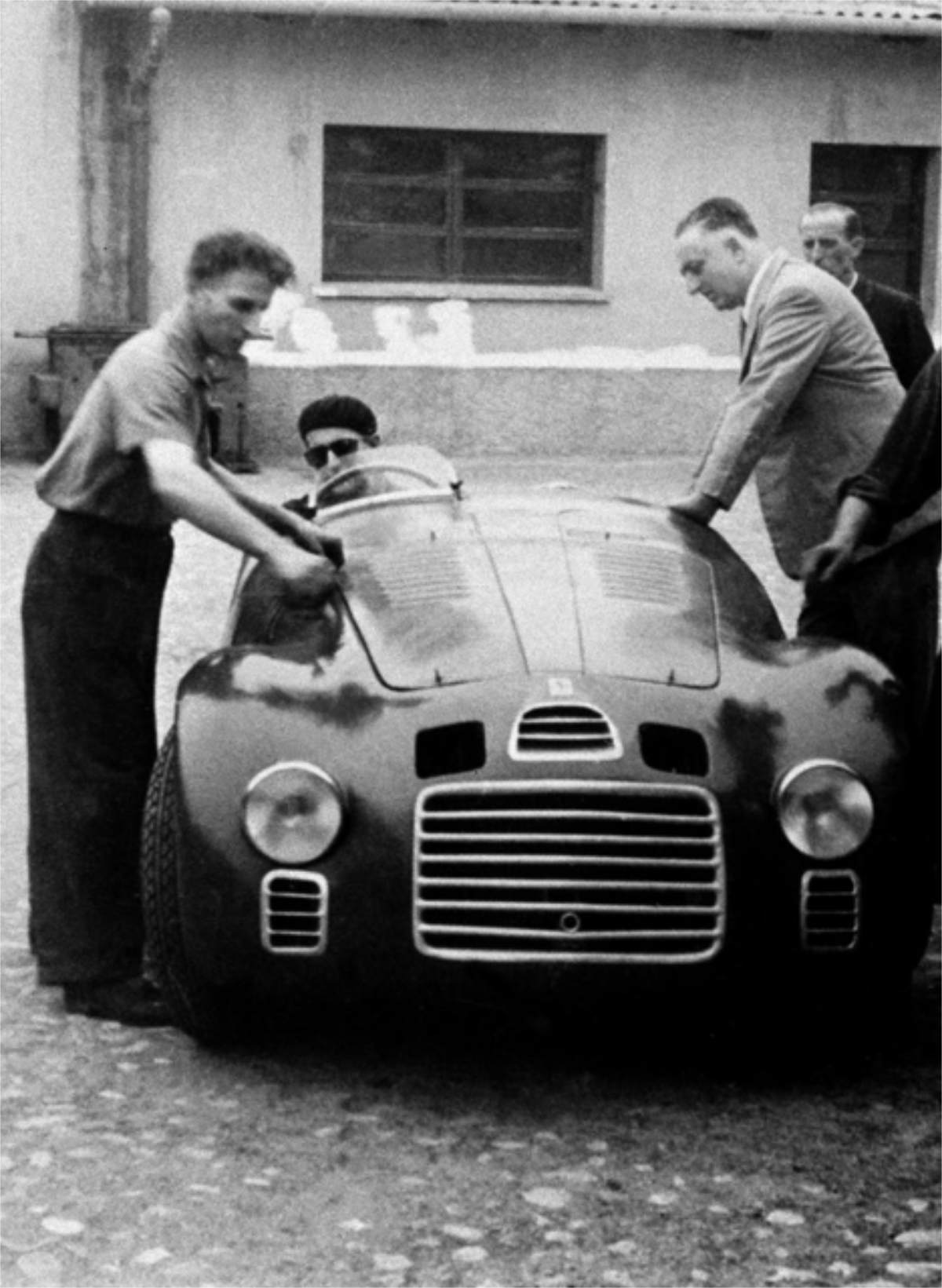 Every design detail of the new Great Characters Enzo Ferrari Special Edition evokes the achievements and character of this pioneer of speed and automotive engineering. The color of the precious resin of the cap and barrel is inspired by the Ferrari color “Rosso 70 Anni”. The cone is engraved with two dates, one marks the birth of Enzo Ferrari and the other his first victory on a racetrack in 1923. The Montblanc emblem that crowns the writing instrument in yellow resin represents the colour of the city of Modena. It is embedded in a metal grid, inspired by a vintage car grill. 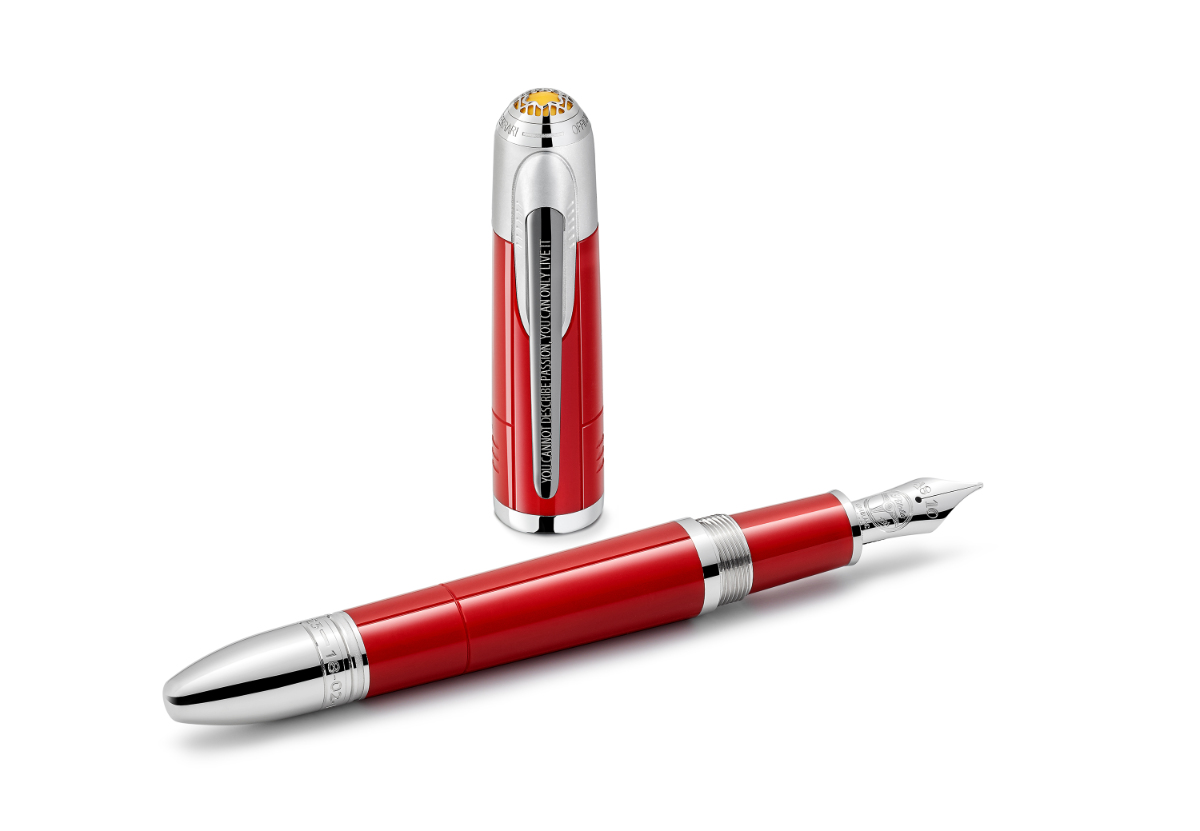 The ring on the cap top features the engraving “OFFICINA MECCANICA ALFREDO FERRARI”, a reference to Ferrari’s father Alfredo´s workshop and his birthplace. The writing instrument’s metal ruthenium-coated clip is laser-engraved with Enzo Ferrari’s own words: “You cannot describe passion, you can only live it”. The back of the cap reveals the iconic “Prancing horse” logo of Ferrari with a famous quote by Countess Paolina Biancoli (Le porterà fortuna), who gave the horse to Enzo in recognition of her son who had it painted on his plane during World War I for good luck. The edition is available as a Rollerball and Ballpoint, as well as a Fountain Pen with an Au585 solid gold rhodium coated nib engraved with a Ferrari 250 GTO wheel, one of the most famous Ferrari cars, with the addition of the word - ”Pilota”.

With a limitation number of 1898 to mark the year of Enzo Ferrari’s birth, the Great Characters Enzo Ferrari Limited Edition 1898 features a cap and barrel made from metal evoking the surface of the original Ferrari 125 S engine. The two dates engraved on the cone reference the production date of his first car at his Maranello factory, as well as the date of the first racing victory ever for a Ferrari branded car. Testament to the importance of Maranello, the ring on the cap top is embossed with the address of the Ferrari factory where his vision became reality. 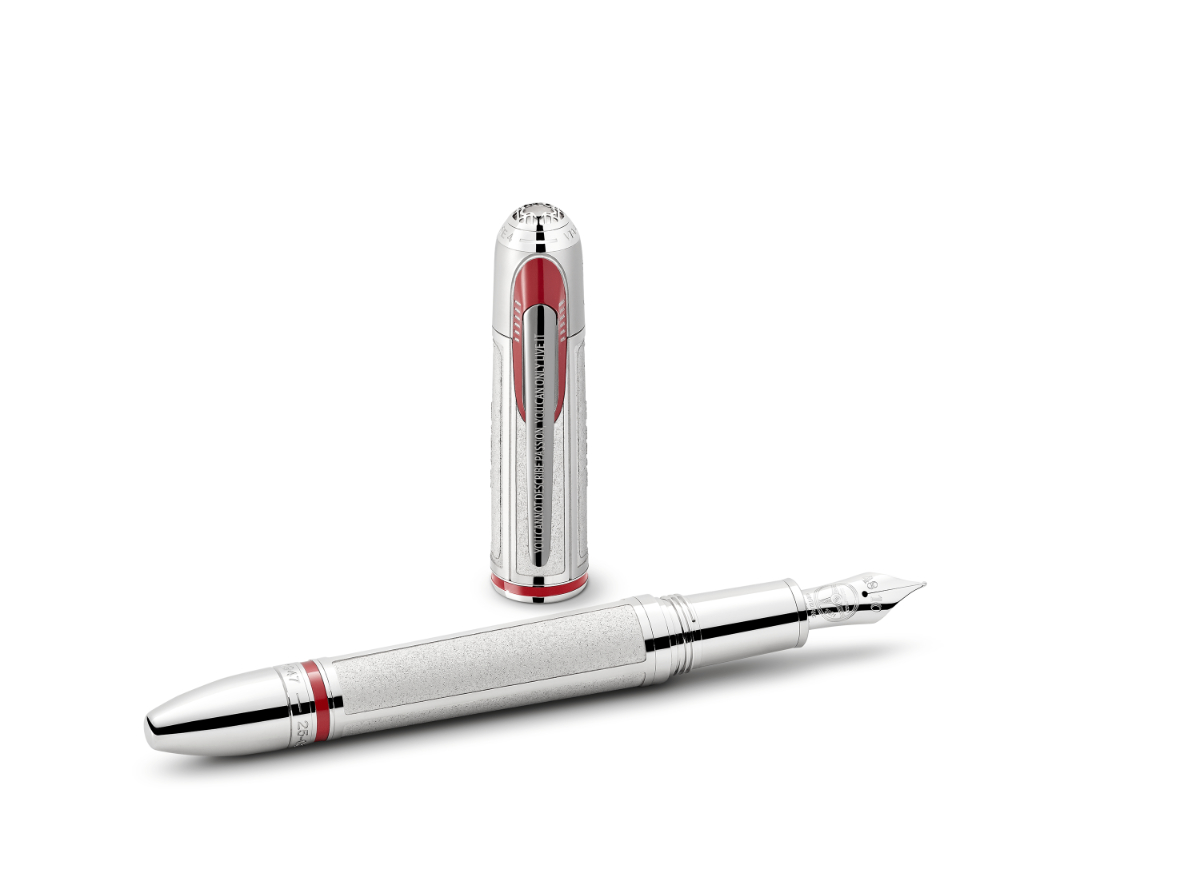 The Montblanc emblem, set atop both the Fountain Pen and Rollerball Pen of this edition in the metal grill, is in frosted quartz to resemble the frozen windows on which Enzo Ferrari would practice his signature as a young boy dreaming to be a race driver one day. The Au750 solid gold rhodium-coated nib has been embellished with a Ferrari 250 GTO wheel, one of the most famous Ferrari cars, and with the word “Commendatore”, a nickname widely used for Enzo Ferrari.

With a limitation number of just 98 pieces in homage to the Cavallino Rampante, the Prancing Horse bestowed as a personal emblem to the founder of the Ferrari legend 98 years ago, the cap and barrel of the Great Characters Enzo Ferrari Limited Edition 98 are airbrush lacquered by hand in “Rosso Corsa”, the official racing colour of Italian vehicles and drivers. The cap is decorated with the number 29 in reference to year the Scuderia Ferrari was founded, as well as with an engraving of the Cavallino with the words ‘Sono uno che ha sognato di essere Enzo Ferrari’ (‘I am one who dreamt to be Enzo Ferrari’). The same emblem in yellow gold adorns a special mechanism offering a glimpse inside the barrel, where the Prancing Horse is revealed when turning the cone to fill the fountain pen with ink, just like gas being poured into the tank to bring a powerful engine to life. 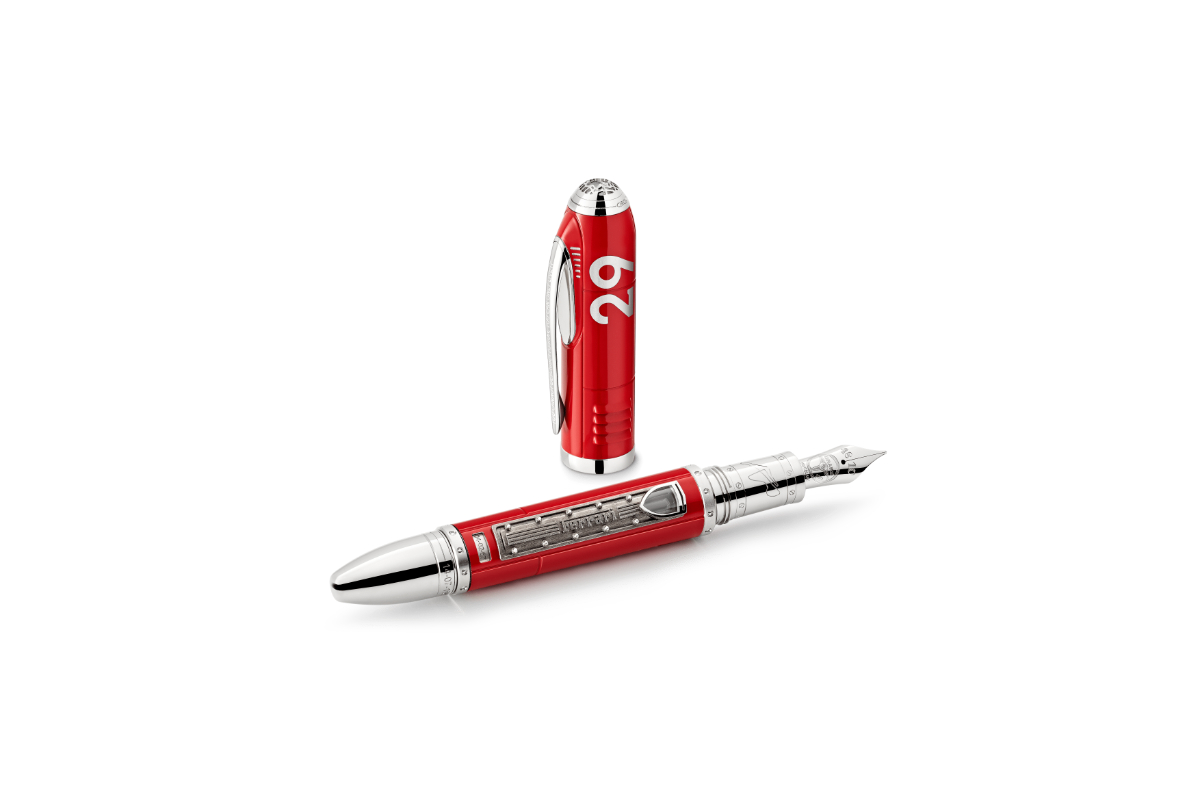 The dates engraved on the cone, 14/07/1951 and 11/09/1988, refer to two of the most important Formula One victories for Ferrari. The first being the very first victory in F1 for the Scuderia while the latter was a double win at the Italian Grand Prix one month after Enzo Ferrari’s death, symbolizing the continuity of the brand racing heritage. A rotatable slider in matt white gold on the barrel reveals the dates of five historical Ferrari victories, namely the first ones in the most famous international competitions.

The shape of early Ferrari racing cars is reflected in the dynamic design of the clip, decorated with Enzo Ferrari’s motto ‘You cannot describe passion, you can only live it’. The base of the clip is lacquered in Rosso Corsa and around it are six lines to each side, representing a Ferrari V12 engine. Four air vents on each side of the cap are inspired by those on the side of the bodywork of the 1952 Ferrari 500 F2, winner of the first F1 Championship for the Scuderia. The barrel is decorated with a forged ‘metal’ part made from Au 750 solid gold with ruthenium coating representing the engine of that very car.

As a tribute to his success, the Au 750 solid gold nib is engraved with the word ‘Drake’, another name under which Enzo Ferrari was known, and the steering wheel of the 250 GTO, one of the world’s most renowned racing cars. The winding curves of the test track in Fiorano embellish the forepart, while the edition is crowned by the Montblanc emblem in mountain crystal with Enzo Ferrari’s signature in the centre, surrounded by intricate metalwork reminiscent of a vintage car grill.

The spirit of racing, the ingenuity of innovation and an unrelenting passion for speed drove Enzo Ferrari to imagine and shape one of the greatest brands in the world; one associated with victory, prestige and performance. With its new edition, Montblanc celebrates the character and genius of the man who would stop at nothing to race against speed and bring automotive enthusiasts the thrill of racing with every one of his Ferrari cars.

Synonymous with excellence in craftsmanship and design, Montblanc has been pushing the boundaries of innovation ever since the Maison first revolutionized the culture of writing in 1906. Ingenuity and imagination continue to be driving forces for the Maison today as it advances its expression of fine craftsmanship across product categories: luxury writing instruments, watches, leather goods, new technologies and accessories. Reflecting upon its ongoing mission to create fine lifetime companions born from bold ideas and expertly crafted through the skills of the Maison’s artisans, the iconic Montblanc Emblem has become the ultimate seal of performance, quality and an expression of sophisticated style. With its origins deeply rooted in the culture of handwriting, Montblanc continues to assert its cultural commitment around the world honouring modern day patrons who support the advancement of the arts, as well as wide-ranging initiatives that promote arts and culture. 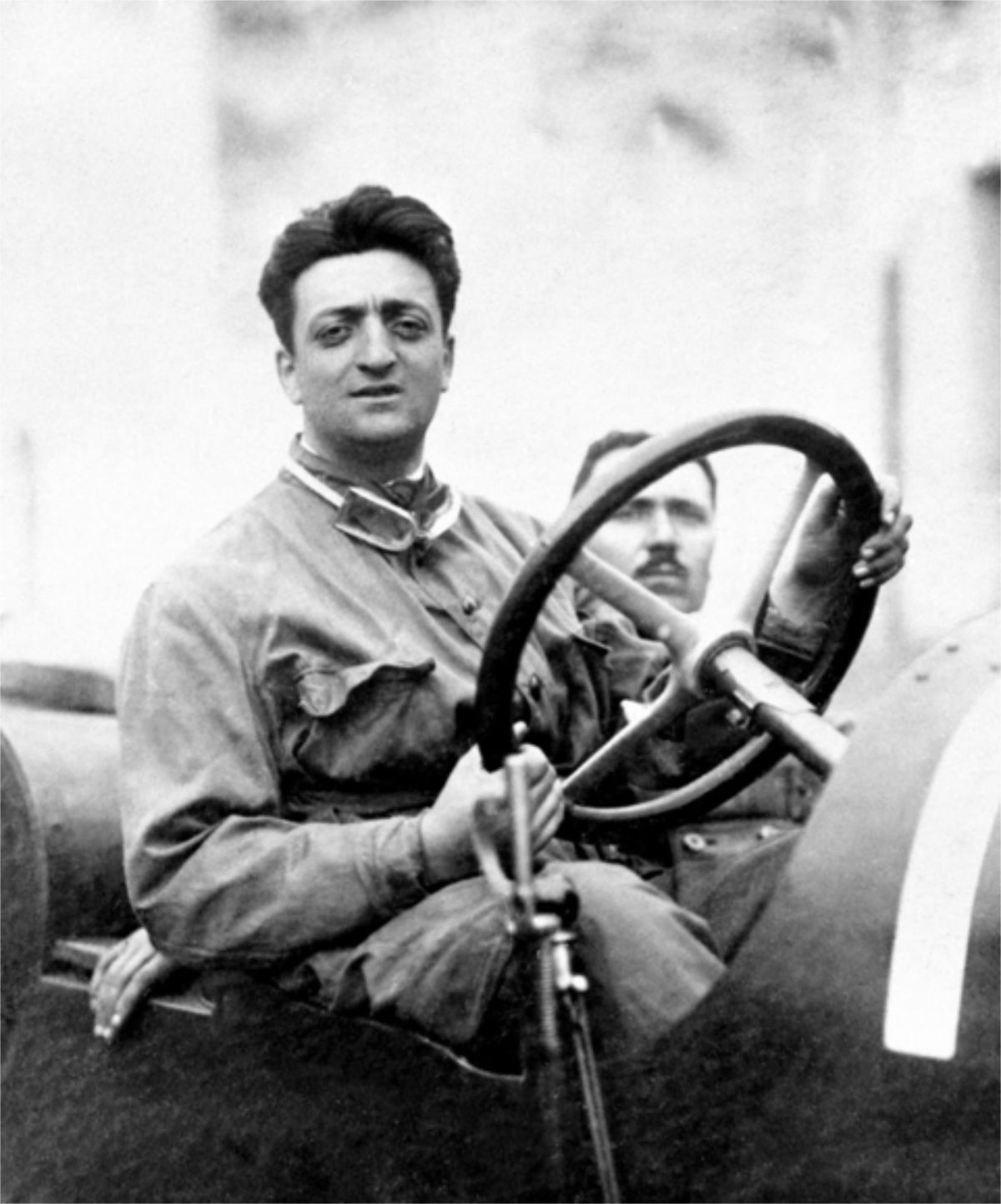