Hermès opened an entirely new space inside Harrods, dedicated exclusively to the women’s universe of the Parisian house.

The store will celebrate the depth and richness of these collections and will be the house’s third addition to the luxury department store, where Hermès has been present since 1991.

Located on the first floor and inspired by the rounded and organic forms of the listed windows that decorate the façade, the space feels like a home, an expanded dressing room with a warm and feminine spirit. An ideal backdrop to peruse all the métiers of the women’s universe, including ready-to-wear, shoes, accessories and jewellery collections as well the new Hermès Beauty métier.

Upon entering the store, designed by Parisian architecture agency RDAI, customers are greeted by the Hermès ex-libris, an iconic signature of the house created in unique wood marquetry. From the entrance, the Spring Summer 2021 women’s ready-to-wear collection, designed by Nadège Vanhée-Cybulski, artistic director of Hermès women’s ready-to-wear, is in full view. This collection is about freedom, the freedom to reinvent, a fresh spirit reflected in the feminine silhouettes, sensual lines, and delicate details. This spirit continues across the shoe collections that are illuminated by the ‘Grecques’ lights that frame the ceiling and playfully reflect upon the glossy wall panels. 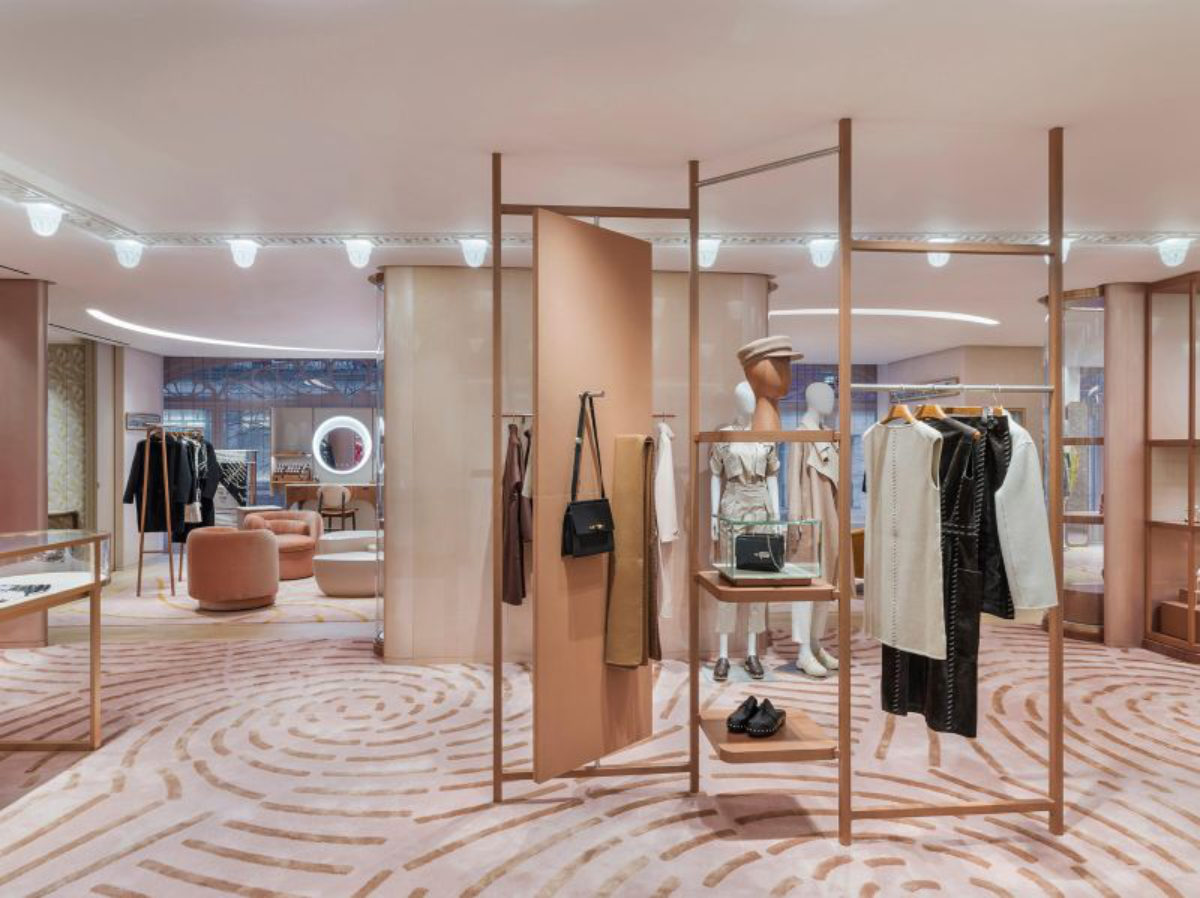 Passing through the central space, a pair of high glass cases display the bags. These double-sided partitions create a focal point, with natural light pouring through, guiding the visitor. The leather offering includes the Sac à Malice. Originally created in 1988 the bag has taken on numerous themes, the latest of which is inspired by space travel and decorated with detailed leather marquetry, echoing Hermès’ annual theme "An Odyssey".

Each métier permeates the open plan space without fixed boundaries, creating a fluid motion that encourages discovery across the collections. Visitors are invited to delve into the variety of fashion accessories - hats, gloves, belts and fashion jewellery – and explore the colourful silk collections that include the exceptional Étole Précieuse Brides de Gala en Désordre, three 70cm silk squares delicately assembled and meticulously hand-embroidered with beads and coloured thread. The watch and jewellery collections are displayed alongside the Hermès Beauty métier. The Rouge Hermès collection and the limited-edition trio are housed in their own bespoke beauty station.

The store will showcase the Bride de Cour Remix silk caftan in an exclusive blue and beige colourway created especially for the opening. The pattern, designed by French artist Françoise de la Perrière, is also featured on Oran sandals to accompany the look.

Expressing an optimistic vision and reflecting the house’s creativity, the Harrods Femme store combines original architectural signatures with a modern twist. Offering a new kind of stimulation — one of understated femininity and lasting dedication to craftsmanship.

In London, Hermès is also present on Bond Street, Sloane Street, within the Royal Exchange and at London Selfridges.

Since 1837, Hermès has remained faithful to its artisan model and its humanist values. The freedom to create, the constant search for beautiful materials, the transmission of savoir-faire of excellence, and the aesthetic of functionality all forge the singularity of Hermès, a house of objects created to last. An independent, family-owned company, Hermès is dedicated to keeping the majority of its production in France through its 51 workshops and production sites and to developing its network of 306 stores in 45 countries. The group employs more than 16,600 people worldwide, including nearly 10,400 in France, among whom nearly 5,600 are craftsmen*.

Axel Dumas, a sixth-generation family member, has been Hermès CEO since 2013. Founded in 2008, the Fondation d’entreprise Hermès supports projects in the areas of artistic creation, training and the transmission of savoir-faire, biodiversity, and the preservation of the environment.