On November 20, 2020, Hermès opened an entirely new store in the Mall at Short Hills, relocated within the iconic shopping center, doubling the original footprint with 4,424 square feet of retail space. Taking inspiration from the bucolic surroundings of eastern New Jersey, with its lush forests and verdant gardens, the design concept also provides expanded access to Hermès’s sixteen métiers, offering customers a new setting with which to enjoy exceptional craftsmanship and service.

Capturing the dappled sunlight of a stroll down a wooded path, the store’s façade is outfitted in a cascade of tiles glazed in varying shades of green. The signature mosaic tile floor found in Hermès stores worldwide has been rendered here in caramel and forest green tones and extended beyond the border of the entrance. Spilling out into the common space of the shopping center, it acts as an invitation to come inside and discover a world of quality and attention to detail. 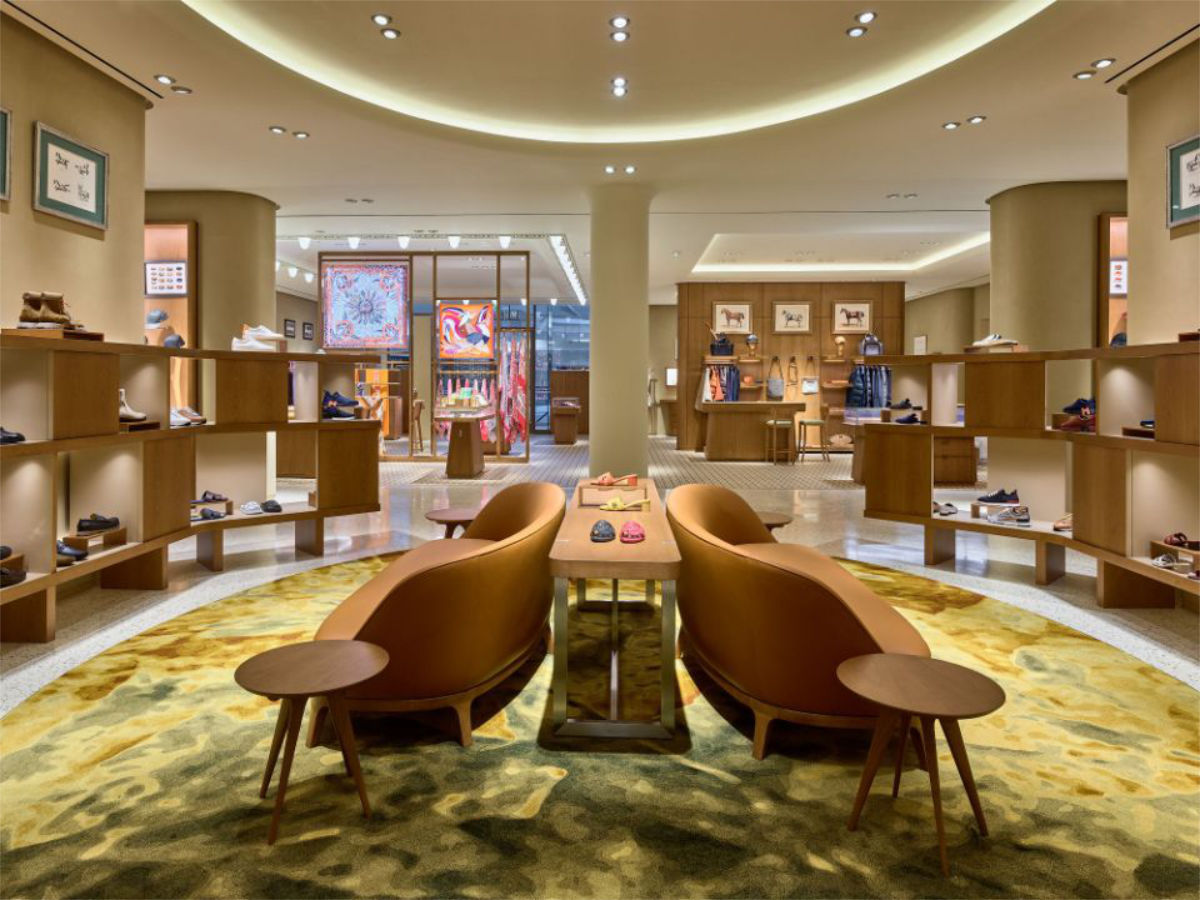 Spread across a single floor, this new store includes dedicated areas for such métiers as leather and equestrian, of special importance to the local clientele, now with its own lounge. A separate area for women’s and men’s silk and fashion accessories sits adjacent, contiguous to the new Parisian house’s métier Hermès Beauty, with its first collection, Rouge Hermès. Bespoke carpets delineate men’s and women’s ready-to-wear and shoe salons accessible deeper in the store, adding texture to an organic design motif that echoes the forest floor. Walls throughout the space are covered in a variety of textured materials, including varnished cherry wood, braided cork and a jute and cotton blend. Further, visitors will find two additional salons for watches and fine jewelry as well as an offering for the home. RDAI, the Parisian architecture agency that designed the new store at Short Hills, strives to capture in interior design the same values that Hermès imparts to its own creation: refinement, harmony and ingenuity.

Throughout the years, the Mall at Short Hills has been a treasured destination for an ever-expanding community of sophisticated customers living in the surrounding garden districts. Hermès has been a part of this development since 2011, and with this new store, it can now ideally accommodate its faithful clientele and new visitors.

Since 1837, Hermès has remained faithful to its artisan model and its humanist values. The freedom to create, the constant search for beautiful materials, the transmission of savoir-faire of excellence, and the aesthetic of functionality all forge the singularity of Hermès, a house of objects created to last. An independent, family owned company, Hermès is dedicated to keeping the majority of its production in France through its 43 workshops and to developing its network of 311 stores in 45 countries. The group employs more than 15,600 people worldwide, including more than 9,700 in France, among whom nearly 5,250 are craftsmen*.

Axel Dumas, a sixth-generation family member, has been Hermès CEO since 2013. Founded in 2008, the Fondation d’entreprise Hermès supports projects in the areas of artistic creation, training and the transmission of savoir-faire, biodiversity, and the preservation of the environment.