Carl F. Bucherer opened its new retail space located inside the newly renovated Bucherer 1888 TimeMachine at 12 East 57th Street (between Madison Avenue and Fifth Avenue) in New York City. The Lucerne-based watch manufacturer congratulates Bucherer on this milestone with a dedicated limited-edition of 188 pieces, of which 30 are only available at the new boutique, and for a special reason.

Carl F. Bucherer Takes Its Place of Privilege in the Bucherer 1888 TimeMachine

With its new boutique in the Bucherer 1888 TimeMachine on 57th Street in New York City, Carl F. Bucherer joins some of the world’s leading fashion, jewelry, and watch brands in the almost 19,000-square-foot store, which has recently undergone a remarkable renovation and a transition from Tourneau to Bucherer. The Bucherer 1888 TimeMachine’s impressive facade has been designed to allow natural light to flood the retail areas, creating a particularly inviting shopping environment.

The boutique’s interior reflects Carl F. Bucherer’s classic aesthetic codes, which blend seamlessly with the impressive surroundings of the Bucherer 1888 TimeMachine. The Bucherer 1888 TimeMachine has three floors. Alongside areas dedicated to watches, jewelry, and fashion, there are relaxing lounges filled with art and three separate bars where visitors can take a break from the hustle and bustle of the city outside.

Carl F. Bucherer looks forward to welcoming guests from around the world to its new boutique. Sascha Moeri, Carl F. Bucherer’s CEO, says: “We’re excited having a boutique in the Bucherer 1888 TimeMachine on 57th Street and look forward to introducing our unique heritage, our innovations, and a bit of what we like to call our ‘Made of Lucerne’ spirit at one of the world’s best addresses. We believe that our customers will be as amazed as we are by this incredible store. It’s not an exaggeration to say that it redefines the luxury shopping experience.” He smiles and adds: “When people are making a to-do list for their trips to New York, they should include the TimeMachine along with the Statue of Liberty and the Empire State Building!” 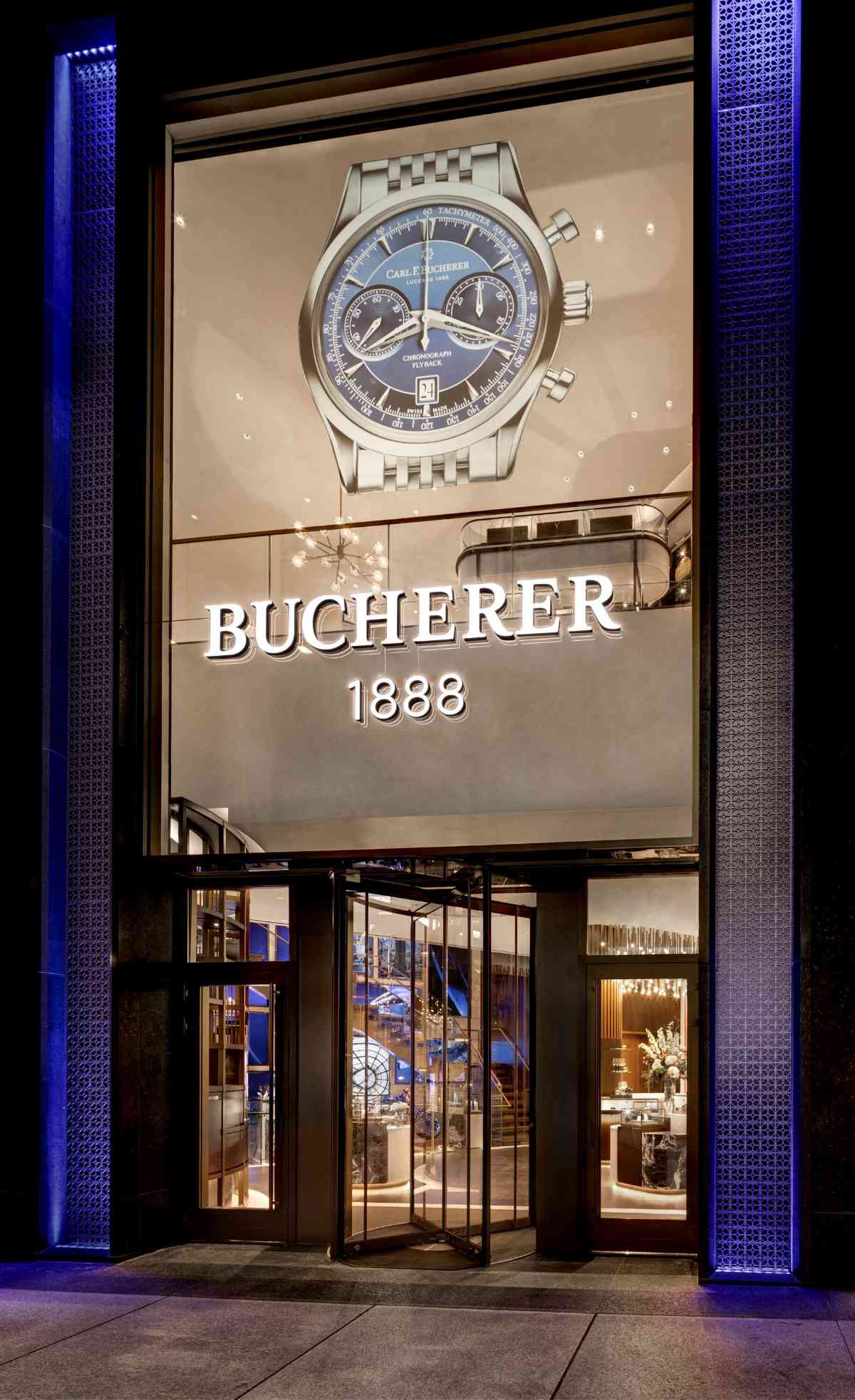 The Swiss prestige watch brand Carl F. Bucherer and the global luxury retailer Bucherer share more than a name. Both trace their roots back to 1888, when Carl Friedrich Bucherer opened his first watch and jewelry shop in Lucerne. Over the years, the watch brand and the retailer have evolved separately, but they are both proud members of the Bucherer Group under owner and Chairman of the Board Jörg G. Bucherer, who represents the third generation of the Bucherer family. It’s fair to say that these key players in their respective segments are cousins – or even siblings – defined by their strong Bucherer family DNA. Carl F. Bucherer is truly proud to be part of the iconic Bucherer Group.

The Carl F. Bucherer boutique offers a carefully curated selection of some of the brand’s most beloved timepieces, including the Heritage BiCompax Annual Bucherer BLUE Limited Edition. It has a 41 mm stainless steel case and a luxurious black leather strap. Its striking dial features graduated shades of blue with blue subdials with chronograph minute and small seconds counters. The dial is ringed by a blue tachymeter scale. The dial is completed by a month aperture at the 4:30 position and a big date window just below 12 o’clock. It has been created in an edition whose total size is 188 pieces, a reference to the fact that founder Carl Friedrich Bucherer opened his first watch and jewelry shop in Lucerne in 1888. 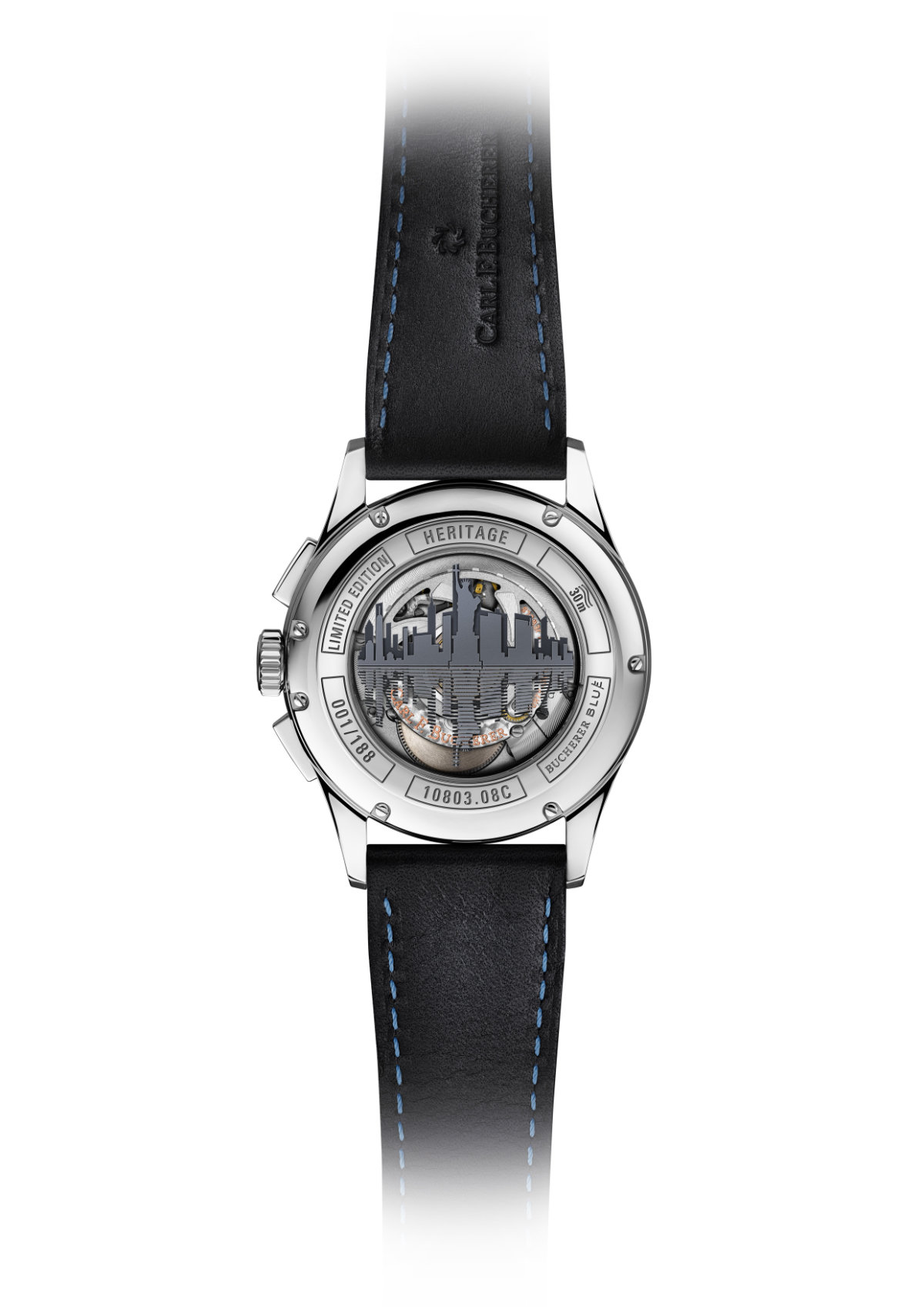 Thirty of those 188 watches feature a case back crystal with an engraved silhouette of the New York City skyline, a homage to the fact that the first Tourneau store in New York was opened in 1930.

A Vintage Vibe with a Cutting-Edge Contemporary Mechanical Movement

Like all the timepieces in Carl F. Bucherer’s Heritage collection, this Heritage BiCompax Annual Bucherer BLUE Limited Edition recalls some of the brand’s classic timepieces from one of watchmaking’s great eras, but the mechanical movement at the heart of the watch is a contemporary masterpiece. The CFB Caliber 1972 automatic chronograph has a power reserve of 42 hours. Its innovative annual calendar complication considers different month lengths – 30 and 31 days – so the date only has to be corrected once a year, on March 1, whether you’re in our hometown of Lucerne, our new boutique at the Bucherer 1888 TimeMachine in New York City, or anyplace in between. We are always proud to point out that we may be rooted in the heart of Switzerland, but we’re at home everywhere in the world. 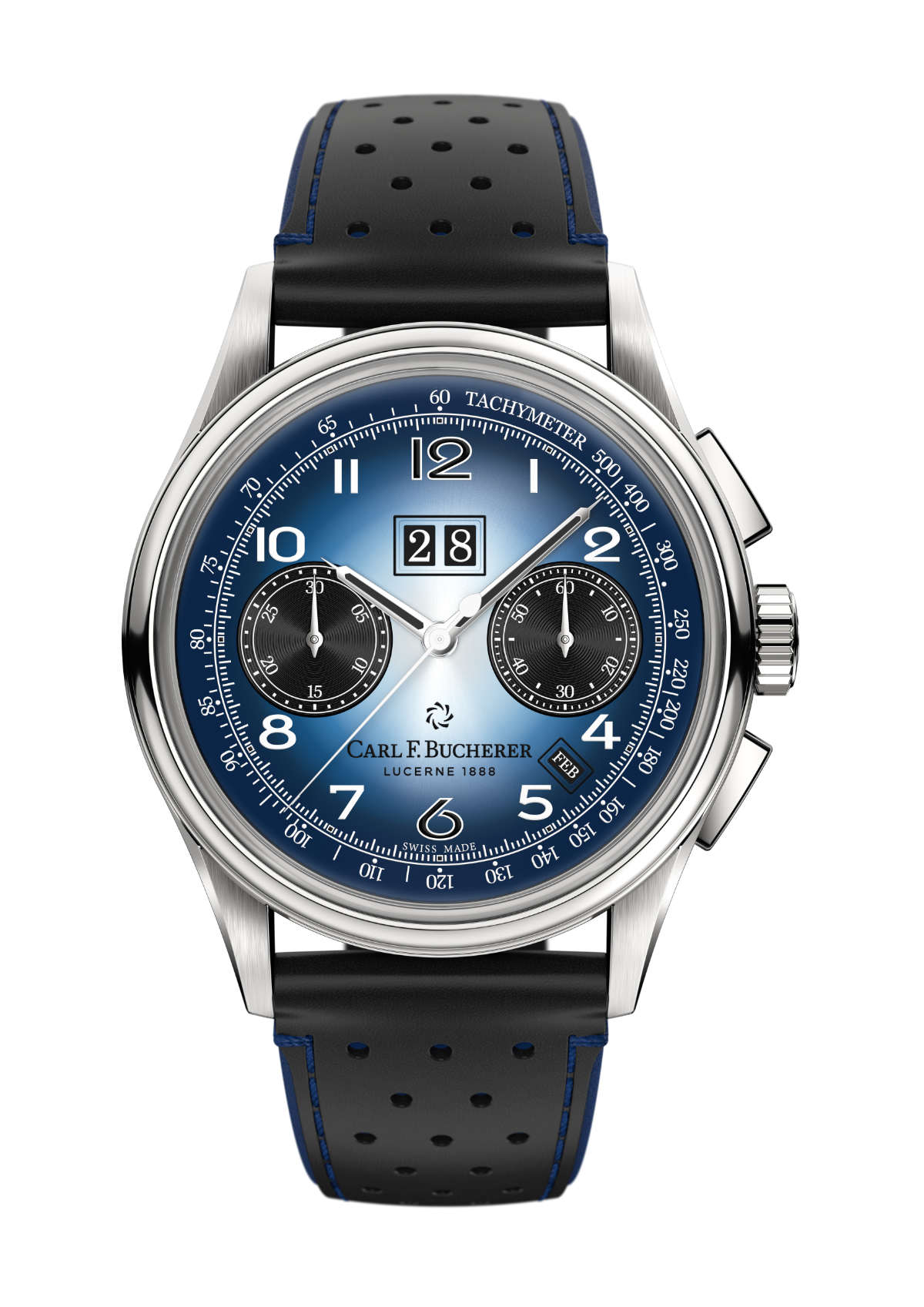 Carl F. Bucherer in the United States: A Proud History

Well-traveled, cosmopolitan Americans have been aware of the Bucherer name for more than a century. Lucerne was a favorite destination, and holidaymakers and adventurers from the United States enjoyed visiting our stores and taking home a keepsake timepiece. When Bucherer Watches officially became Carl F. Bucherer some 20 years ago, the enthusiasm for the brand remained strong among Americans, many of whom already knew the family name from the fine watches that had already found their way across the ocean.

Carl F. Bucherer is excited to reinforce its presence in the United States and to introduce itself to Americans who haven’t yet had the chance to experience the heritage of the brand with a stunning release that celebrates the opening of its new boutique in New York City’s Bucherer 1888 TimeMachine.

- Limitation: Total of 188 pieces (of which 30 are engraved with the NYC skyline on the case back crystal) 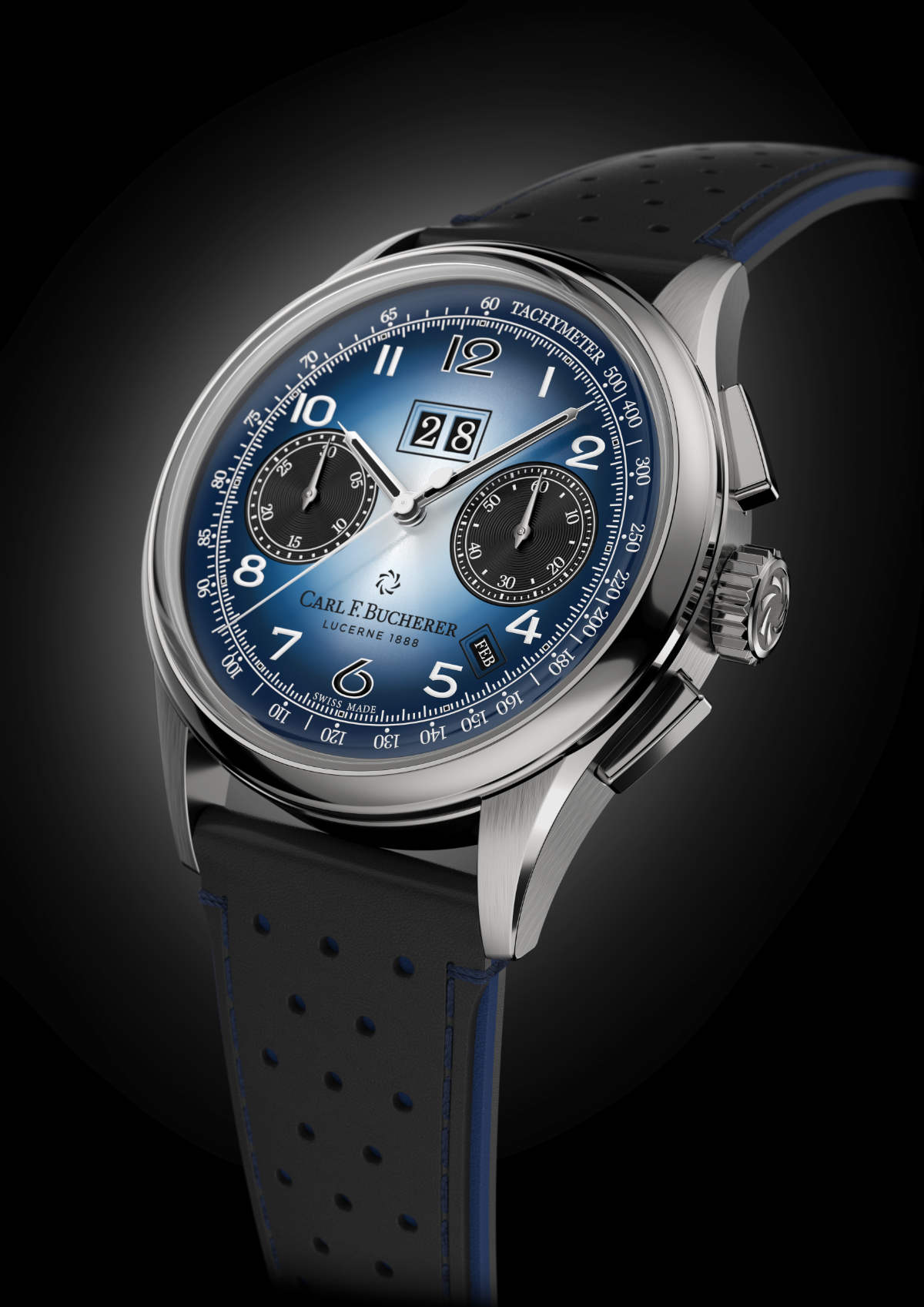 Carl F. Bucherer has been synonymous with excellence, innovation, and passion since 1888. The Swiss company has become an internationally renowned global brand with a presence throughout the world, characterized by its founder’s pioneering spirit and the cosmopolitan esprit of its home city of Lucerne. Carl F. Bucherer is one of the few remaining independent family-owned Swiss watch manufacturers and is now headed in the third generation by Jörg G. Bucherer. The contemporary timepieces produced by Carl F. Bucherer combine unique design with the utmost precision and outstanding functionality. Committed to technical innovation, Carl F. Bucherer is the market leader in peripheral technology and has patented not only a peripheral winding system but also a “floating tourbillon” in a peripherally supported cage and a peripherally-mounted minute repeater regulator.

Carl F. Bucherer – Rooted in the heart of Switzerland but at home everywhere in the world