In 1928, Boucheron was commissioned the largest special order in the history of Place Vendôme by the Maharajah of Patiala. In 2022, Creative Director Claire Choisne pays homage to this treasure by creating the “New Maharajahs” Collection, writing a new page of Boucheron’s History of Style.

Once upon a time, the Maharajah of Patiala...

On August 2nd, 1928, Place Vendôme was buzzing with the arrival of Bhupindar Sing. The Maharajah of Patiala had come to Paris with forty of his servants.

Thirty-five suites had been booked at the Ritz to welcome the Party. The Maharajah was a colossus – he was about 6 ft 7 – and he was famous for his immoderate taste for jewels. No one knew which jeweler he would go to. On that summer day, escorted by Sikh guards carrying iron safes, Bhupindar Singh crossed Place Vendôme and pushed the door of Boucheron.

There, he was welcomed by Louis, son of Frédéric Boucheron. In those safes, Louis counted diamonds, rubies, emeralds, and pearls by thousands. For these gems, Louis then imagined 149 designs: emerald and diamond collars, multiple-strand pearl necklaces, belts covered in precious stones…To this day, these parures created by Boucheron have remained unforgettable.

“This commission by the Maharajah of Patiala seemed like a fairytale, it is the stuff of dreams,“ says Claire Choisne. “In our archives, we have kept the 149 original designs from which I got my inspiration for this collection. I wanted to transpose these designs into the 21st century, and to reinvent them for today’s Maharanis and Maharajahs. For these women and these men who want to express their personality and their own style”.

For these New Maharajahs, the creative studio has highlighted designs referring to elements which symbolize ancestral India, such as the lotus flower, turban ornaments or wedding bracelets, but also for traditional techniques such as glyptics – which is the art of engraving stones. To give life to her creative and contemporary vision, Claire Choisne has made the radical choice of purity through white and transparency, effects of scale that she has naturally transposed both on men and on women.

In this Histoire de Style collection, ceremonial parures have become jewels reflecting one’s singularity. Colors have faded into a monochrome metamorphosis. Pared down from their original polychrome, from opulence to delicateness, these New Maharajas are writing Boucheron’s new Histoire de Style. 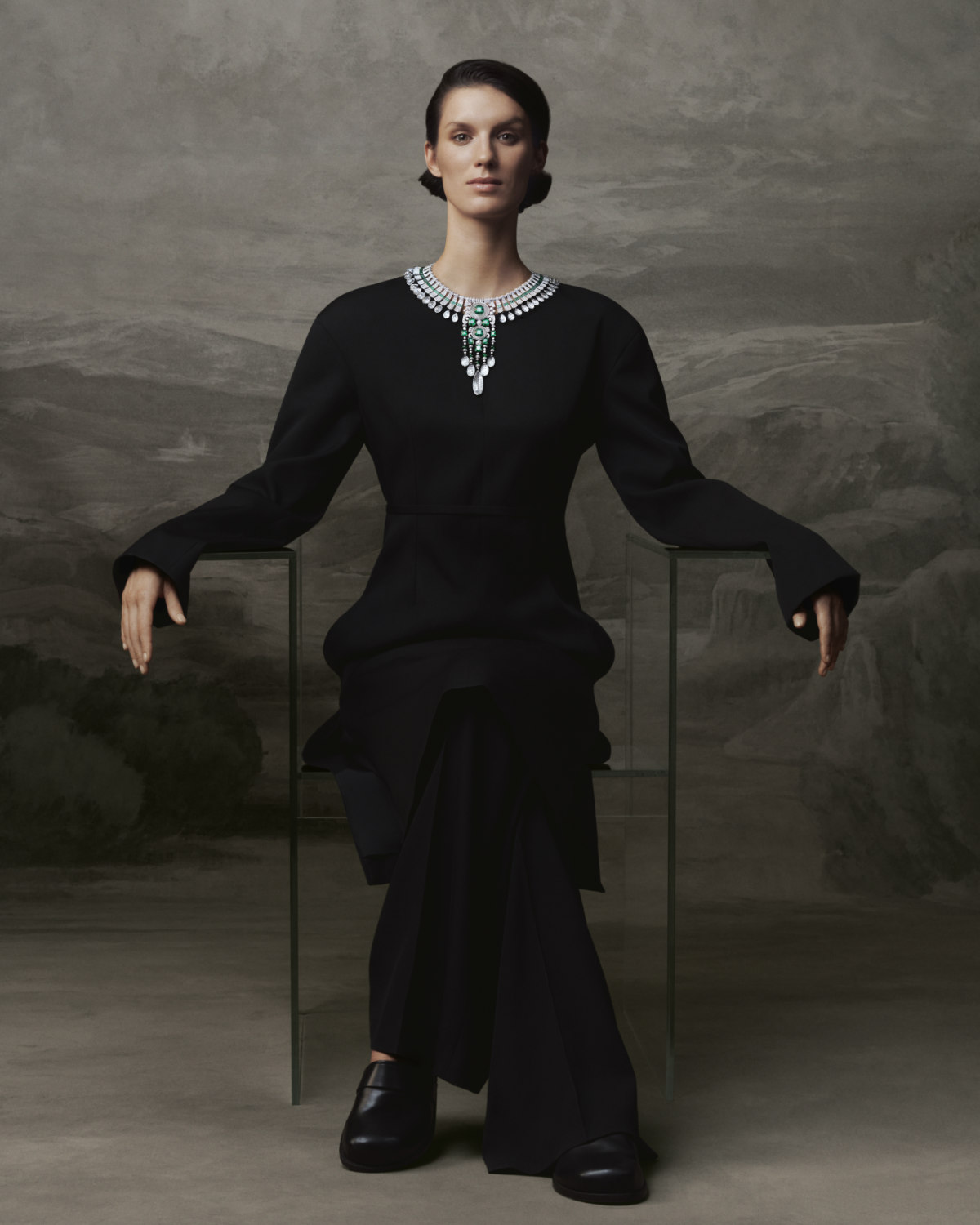 “This is the only colorful parure of the collection. It tells the story of the Maharajah of Patiala’s commission, but without the weight of History”, says Claire Choisne.

The set consists of a necklace and a pair of earrings. Platinum, diamonds, emeralds, rock crystal. 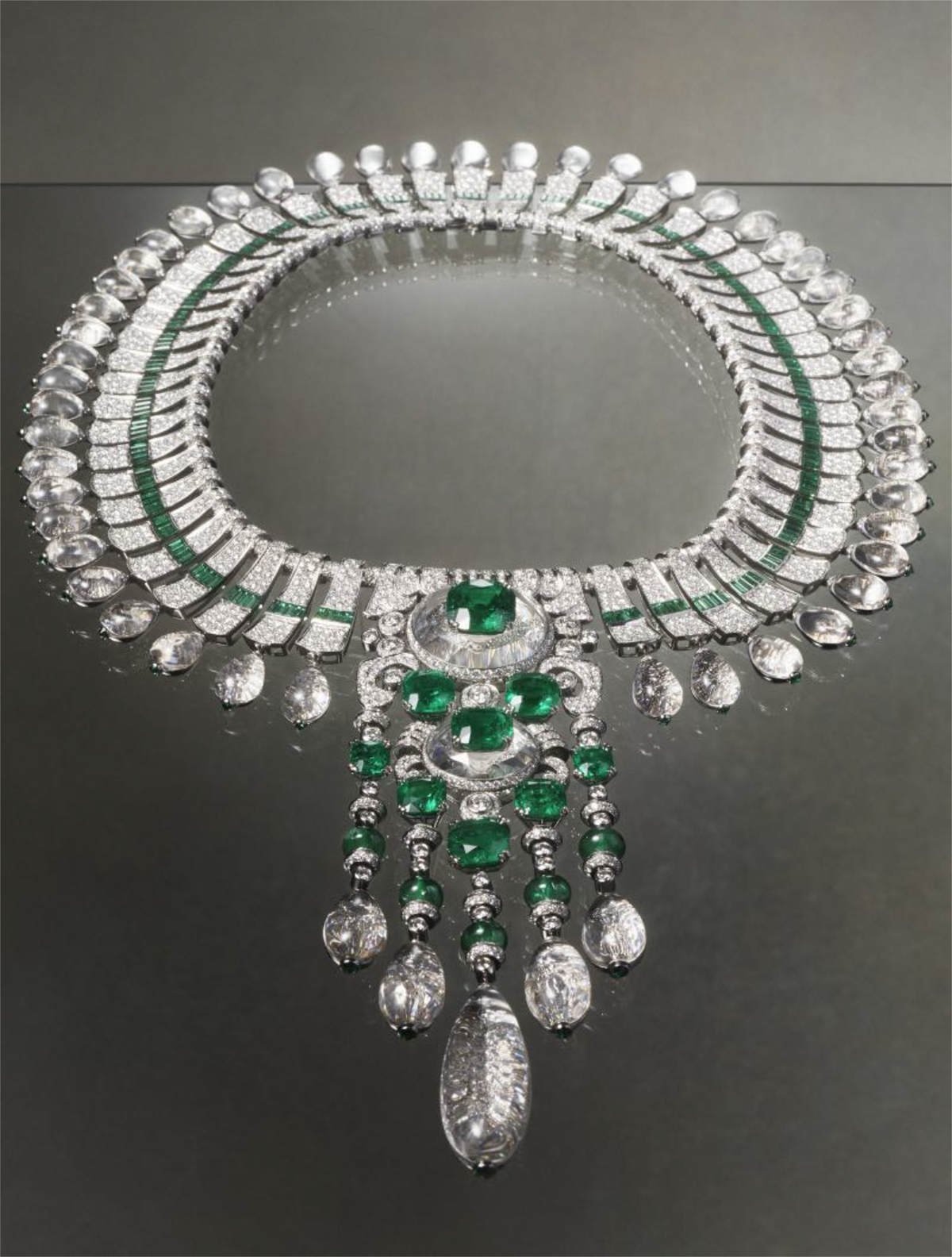 Nine Colombian emeralds, for a total of 40 carats, compose the central motif, which can also be worn as a brooch. Once transformed, the necklace becomes a collar, lined with baguette-cut emeralds, fitting every movement of the body.

So as to lighten up this necklace without altering its beauty, Boucheron has replaced the green gems placed at its ends in 1928 by diamonds. These diamonds are covered by rock crystal, which amplifies their brightness and emphasizes their flow.

New Maharajah Necklace set with 9 Colombian cushion cut emeralds for a total carat weight of 38.73 ct, paved with diamonds, rock crystal and emeralds, in platinum and white gold. Necklace in the tradition of the multiwear. 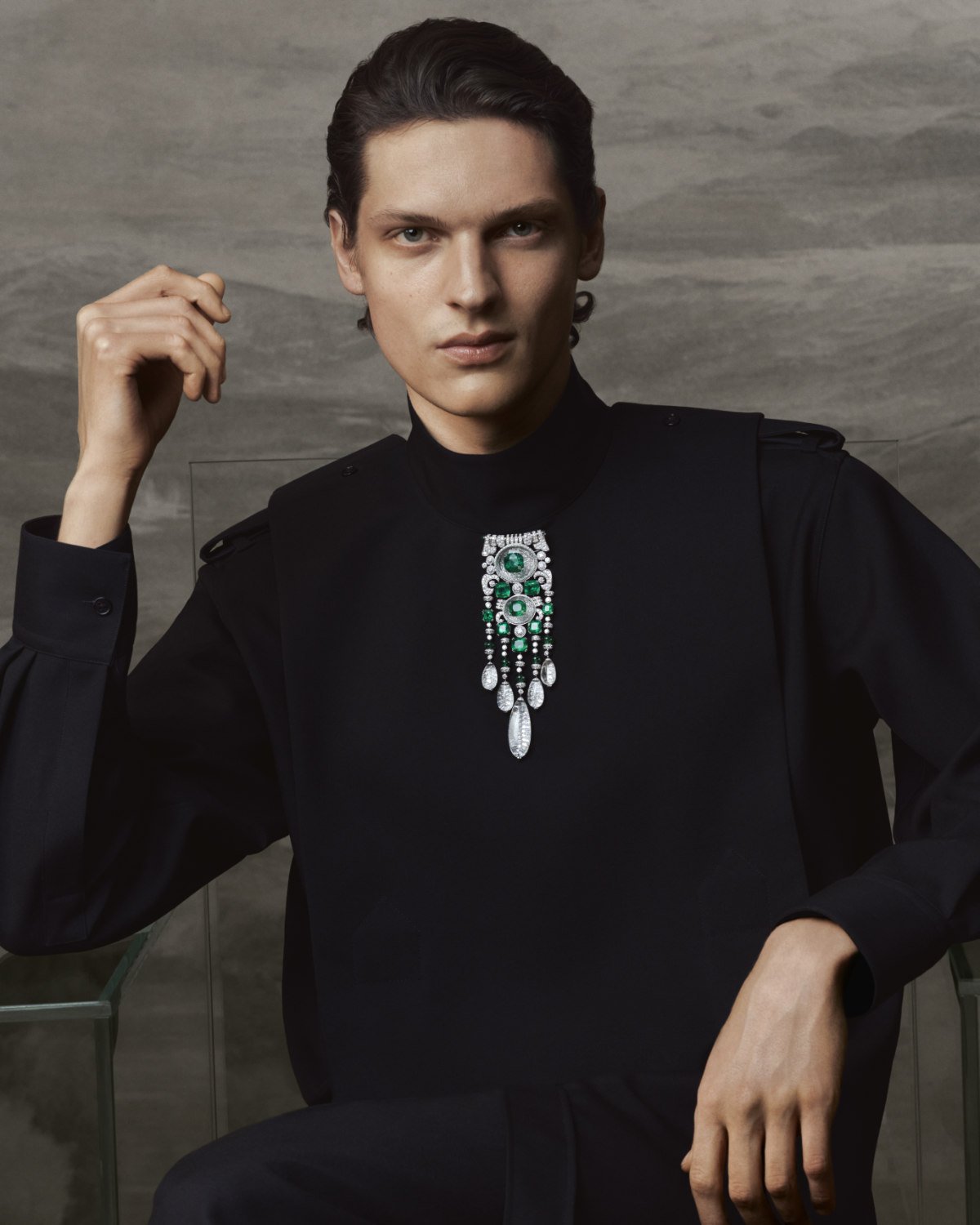 Brooch version of the New Maharajah Necklace set with 9 Colombian cushion cut emeralds for a total carat weight of 38.73 ct, paved with diamonds, rock crystal and emeralds, in platinum and white gold. 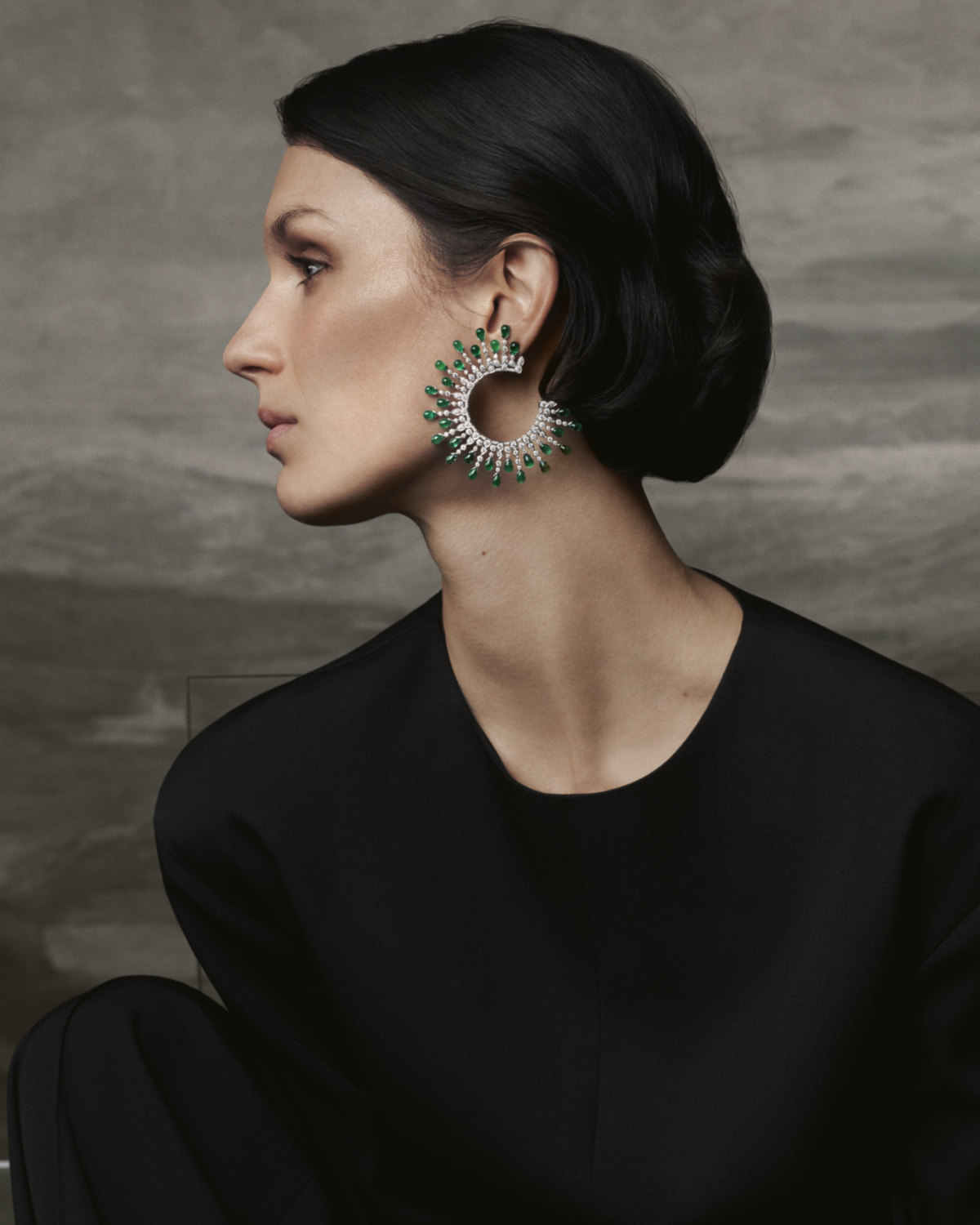 Inspired by another necklace from the 1928 commission, Claire Choisne has worked on effects of scale to imagine this pair of platinum and emerald hoops: their shape is identical to the Maharajah’s original necklace, on a different scale. 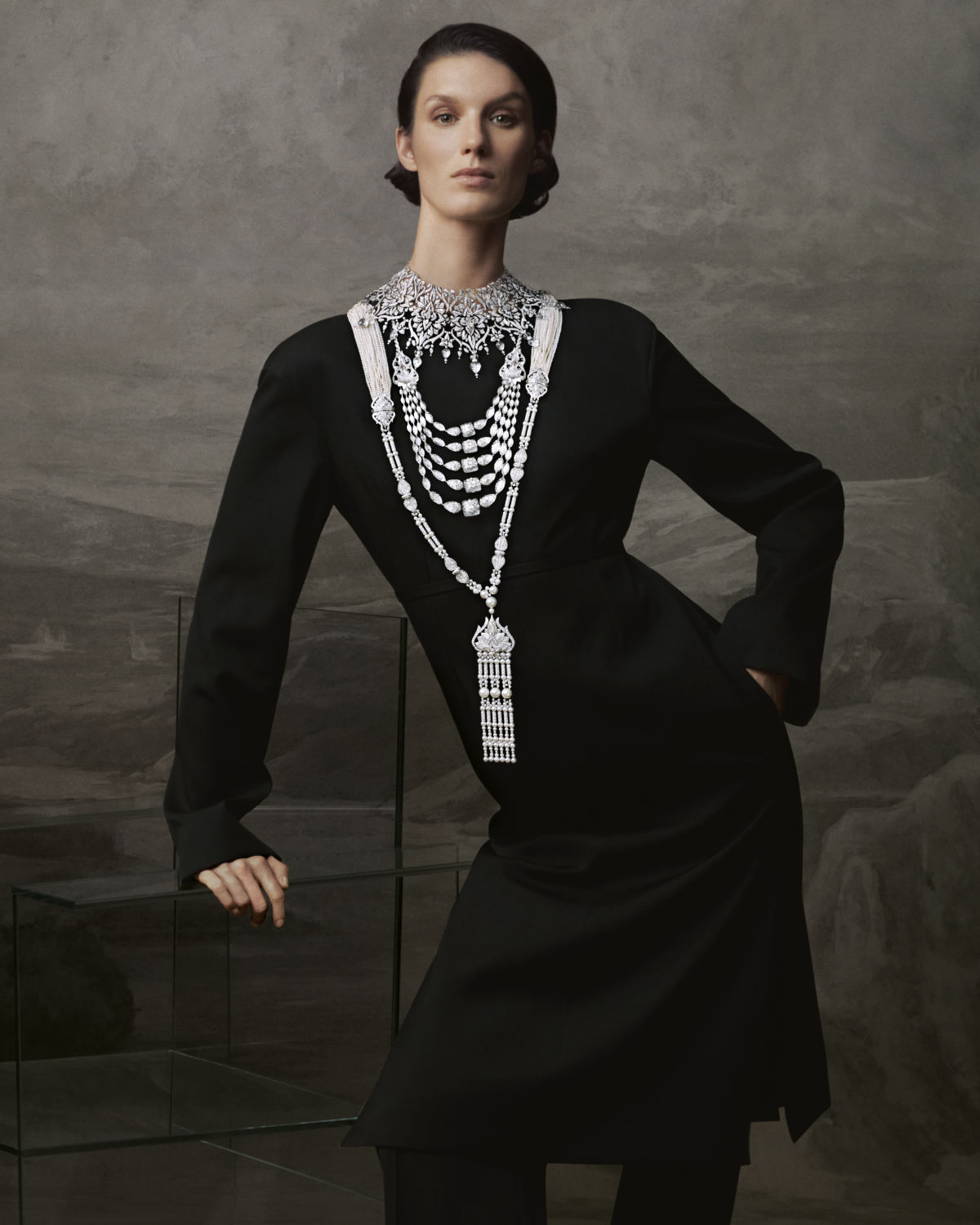 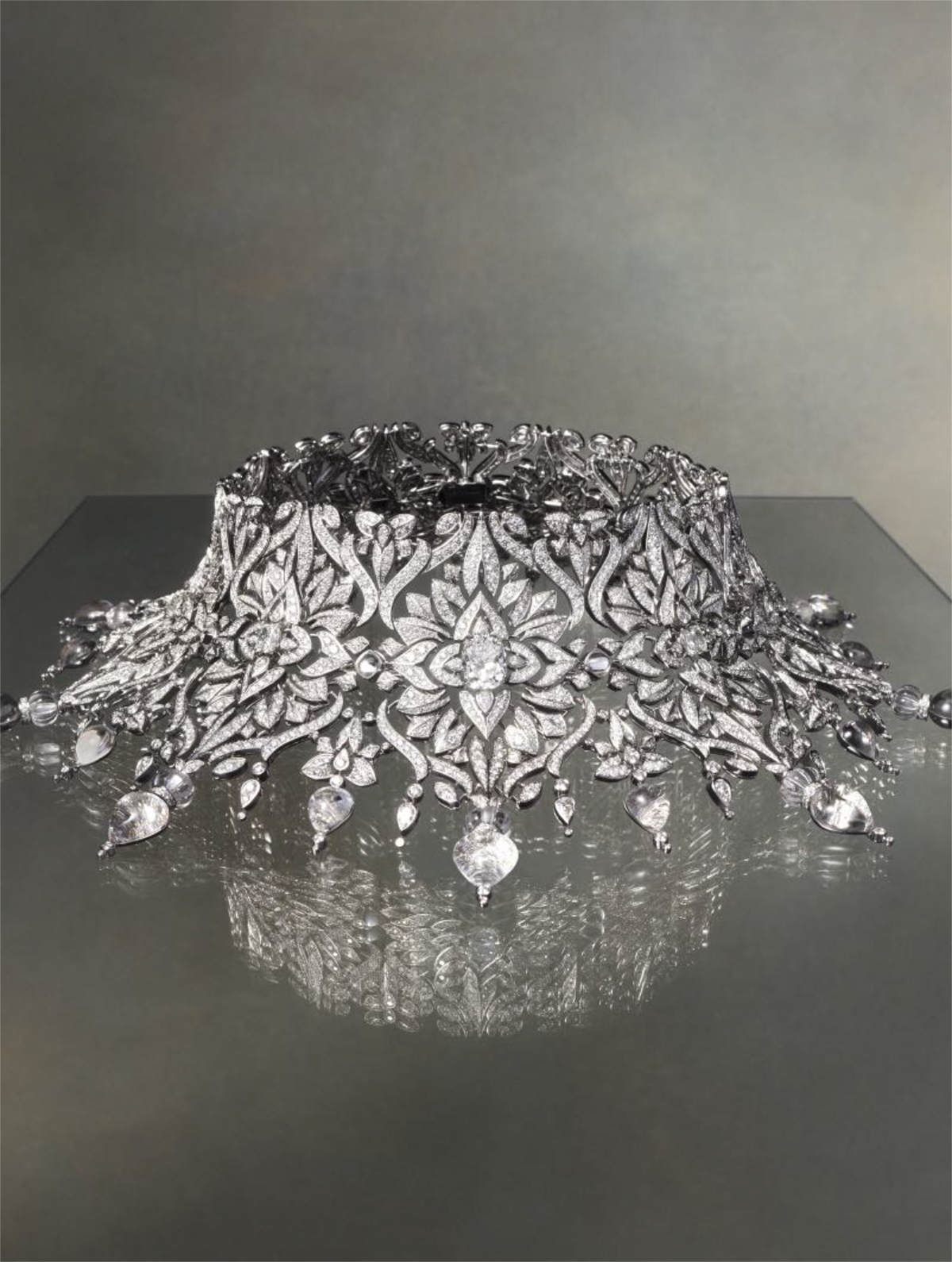 A celebration of the lotus motif, this monochrome choker plays with the downstrokes and the upstrokes of white gold to draw a diamond lace on the skin, a 4,08ct cushion diamond shining at its center. The exquisite delicateness of this piece has required all the expertise of the Boucheron jewelers. “We have chiseled the proportions of this piece from its empty parts and have associated diamonds to it, to give even more lightness to the final result,” says Claire Choisne. “This convertible necklace stands out by its elegance, which is as remarkable as a ribbon version or as a choker.“

It matches a pair of diamond and rock crystal ear pendants which, once united, depict two parts of the same lotus flower. 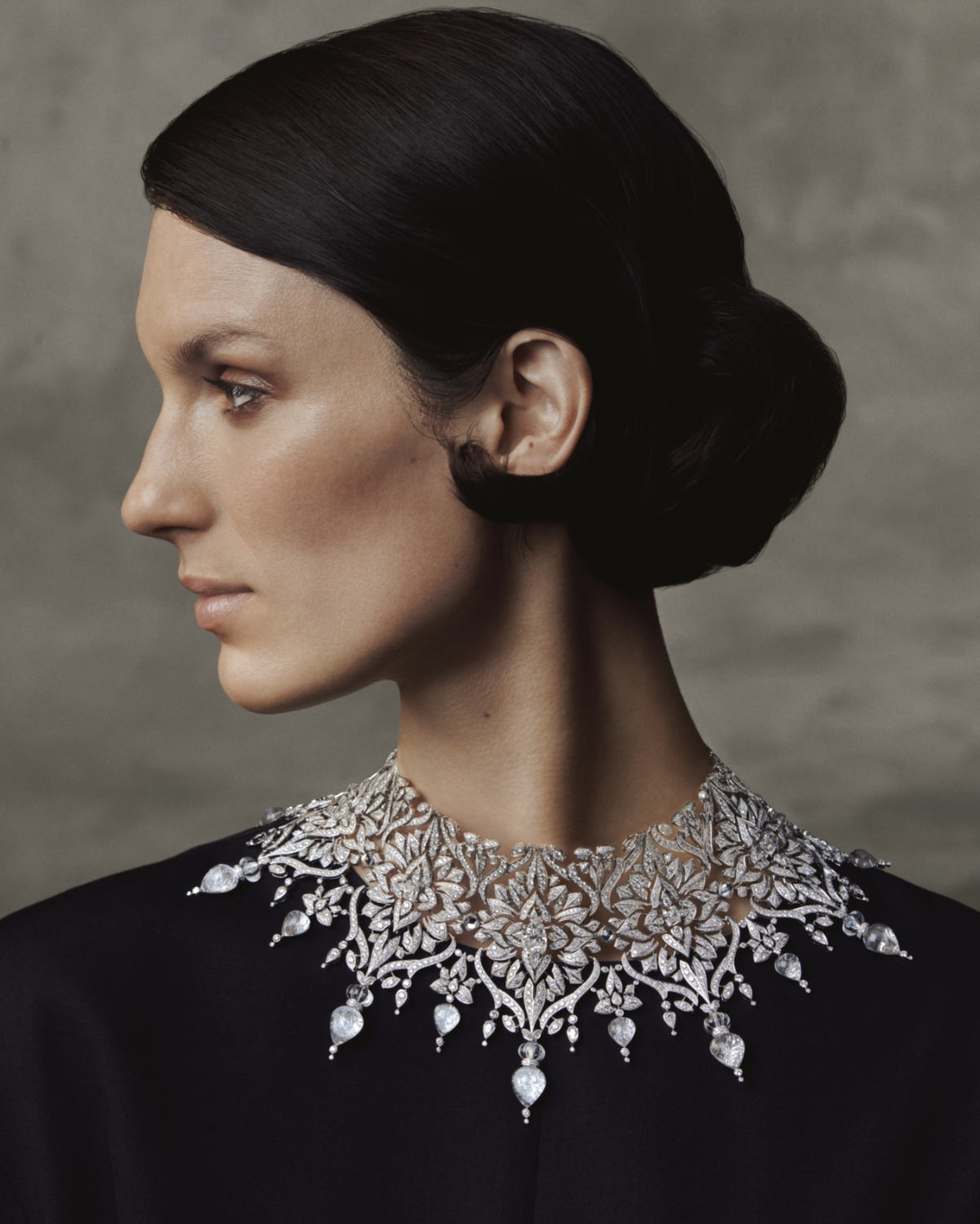 New Maharani Necklace set with a cushion diamond of 4.08 ct, paved with diamonds and rock crystal, in white gold. Necklace in the tradition of the multiwear. 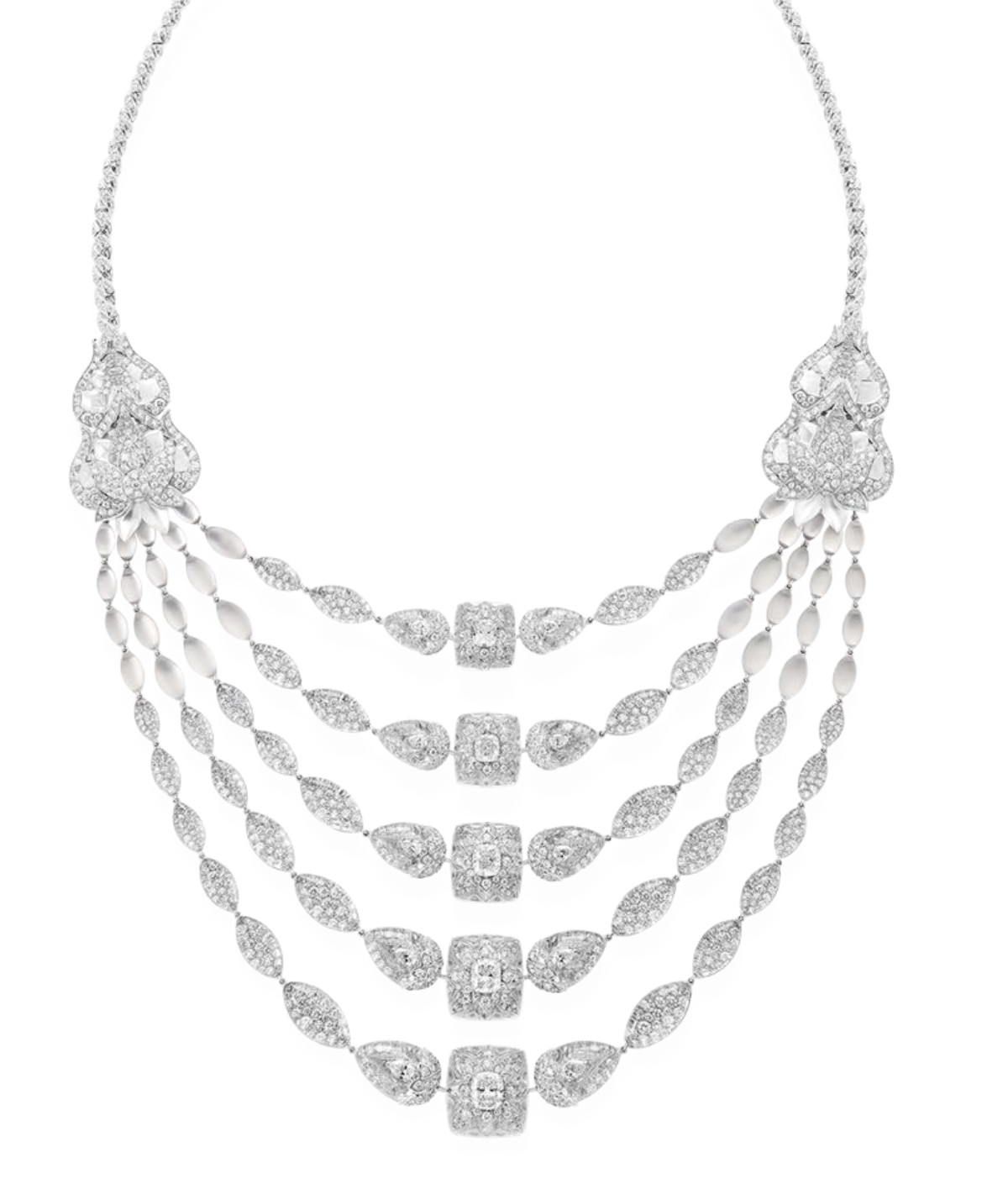 This sparkling necklace, ending with a white gold cord paved with diamonds, was inspired by traditional Indian long necklaces. This piece displays the glyptics technique, applied on rock crystal – which consists of sculpting on a stone. In India, rock crystal was seen as petrified water. At both ends of the necklace, the stone is chiseled in a melon cut, according to the Indian tradition.

The contrast between the complexity of the diamond-paved motifs and the natural evanescence of rock crystal gives this piece all its singularity. It is convertible into a tassel chocker and a short necklace.

New Maharani Cristal Necklace set with 5 cushion diamonds for a total carat weight of 7.35 ct, paved with diamonds and rock crystal, in white gold. Necklace in the tradition of the multiwear. 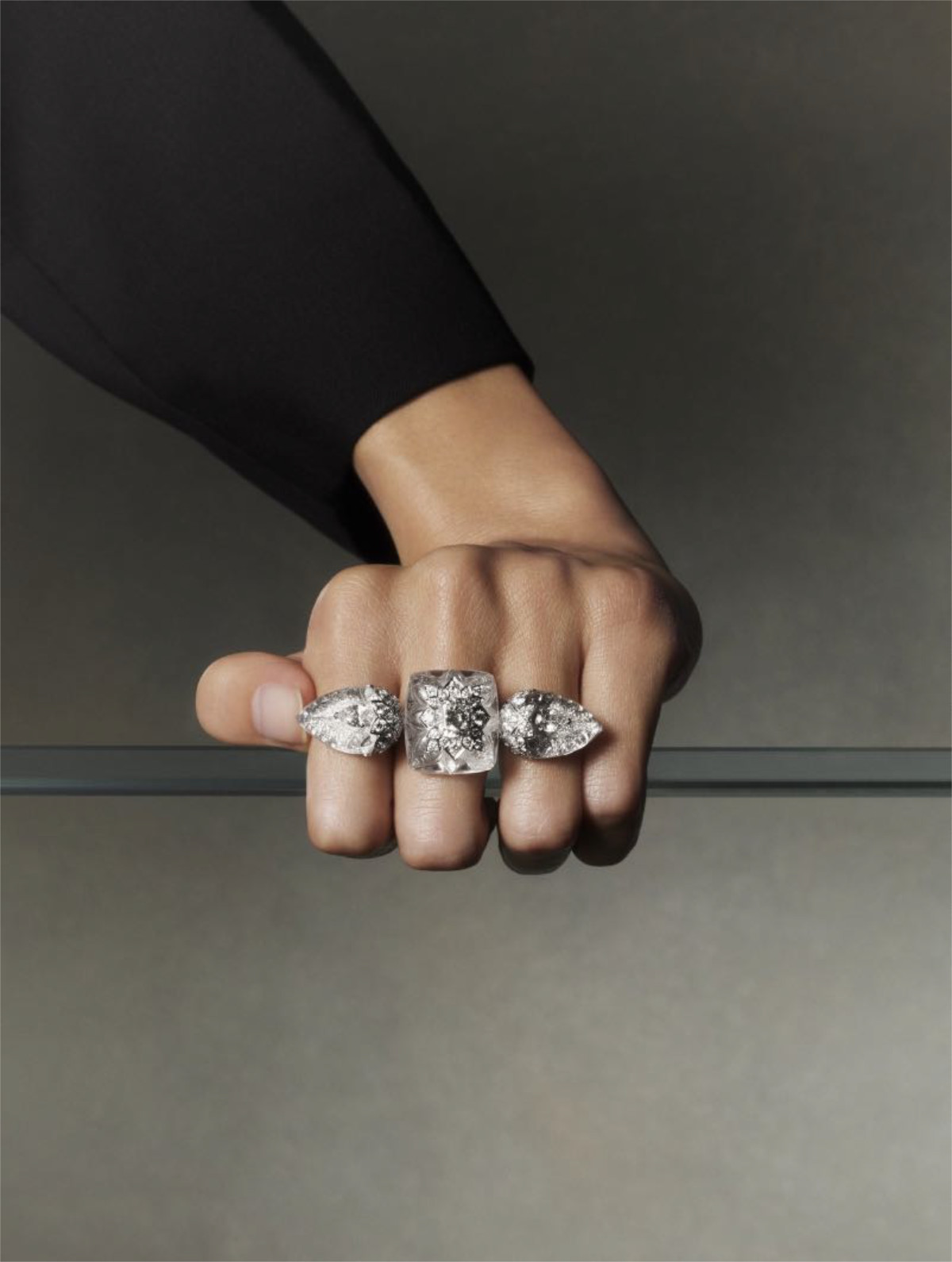 New Maharani Cristal Ring set with a cushion diamond of 1.60 ct, paved with diamonds and rock crystal, in white gold. Ring in the tradition of the multiwear. 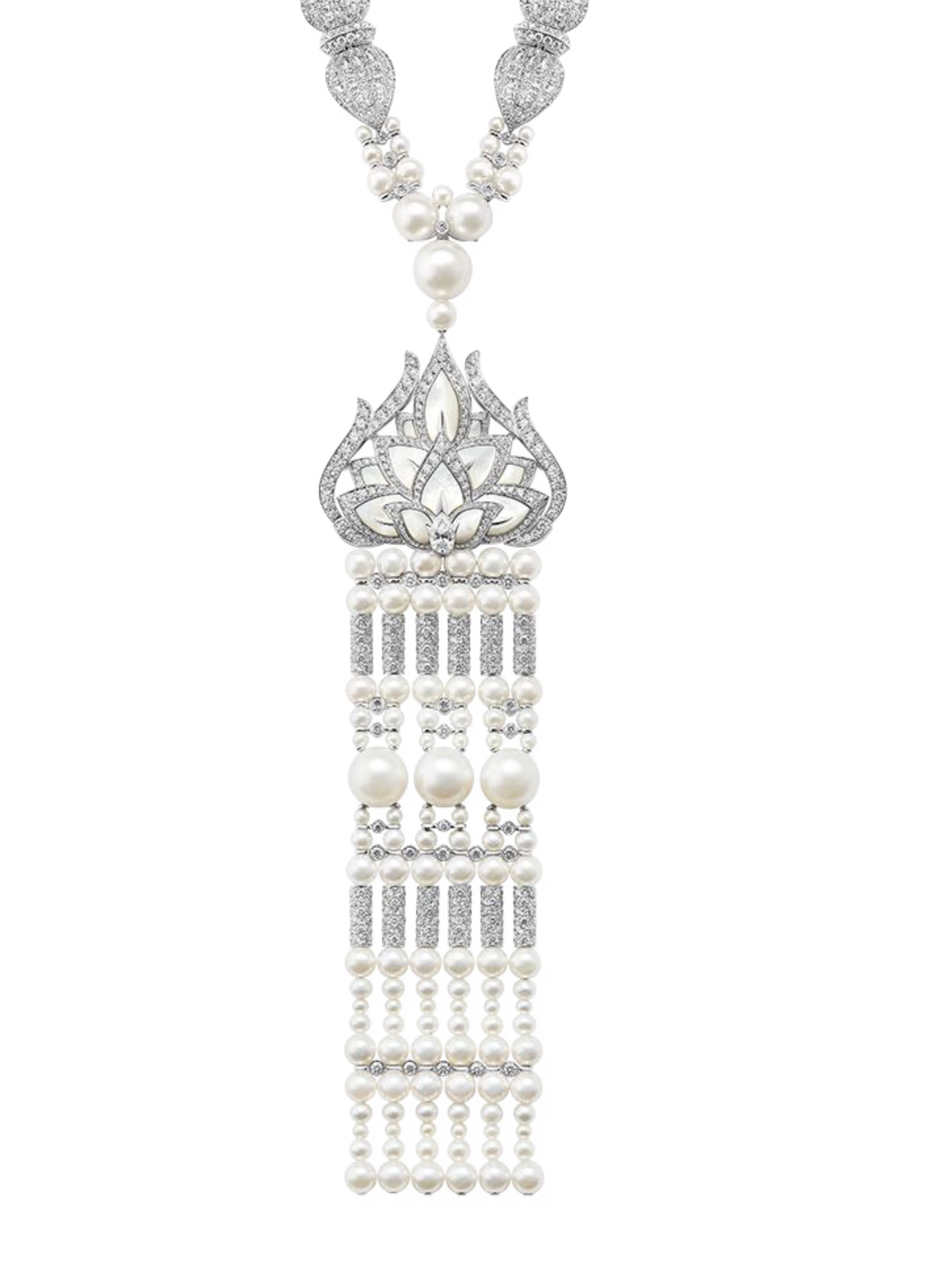 A 5 178 Japanese pearl-cascade springs from this majestic necklace. This flow is cadenced by melon-cut rock crystal beads, shining from the inside thanks to their diamond paving. The lotus flower, chiseled in mother of pearl, is the central motif of this multiwear jewel which offers seven different looks.

The necklace keeps the elegance of its movement whether it is worn in its long or in its short form, or even as a choker. As are the two pearl bracelets, that can be extracted from the full piece.

The long main motif, made of pearls, diamonds and mother of pearl, can be worn as a brooch, on a man’s suit for example.

New Maharani Nacre is also the name of a matching ring. This white gold band, adorned with a mother of pearl lotus and lined with diamonds, can only be worn with its central stone: a marquise solitaire diamond.

New Maharani Nacre Necklace set with a diamond of 0.71 ct, paved with diamonds, rock crystal and mother-of-pearl, with cultured pearls, in white gold. Necklace in the tradition of the multiwear. 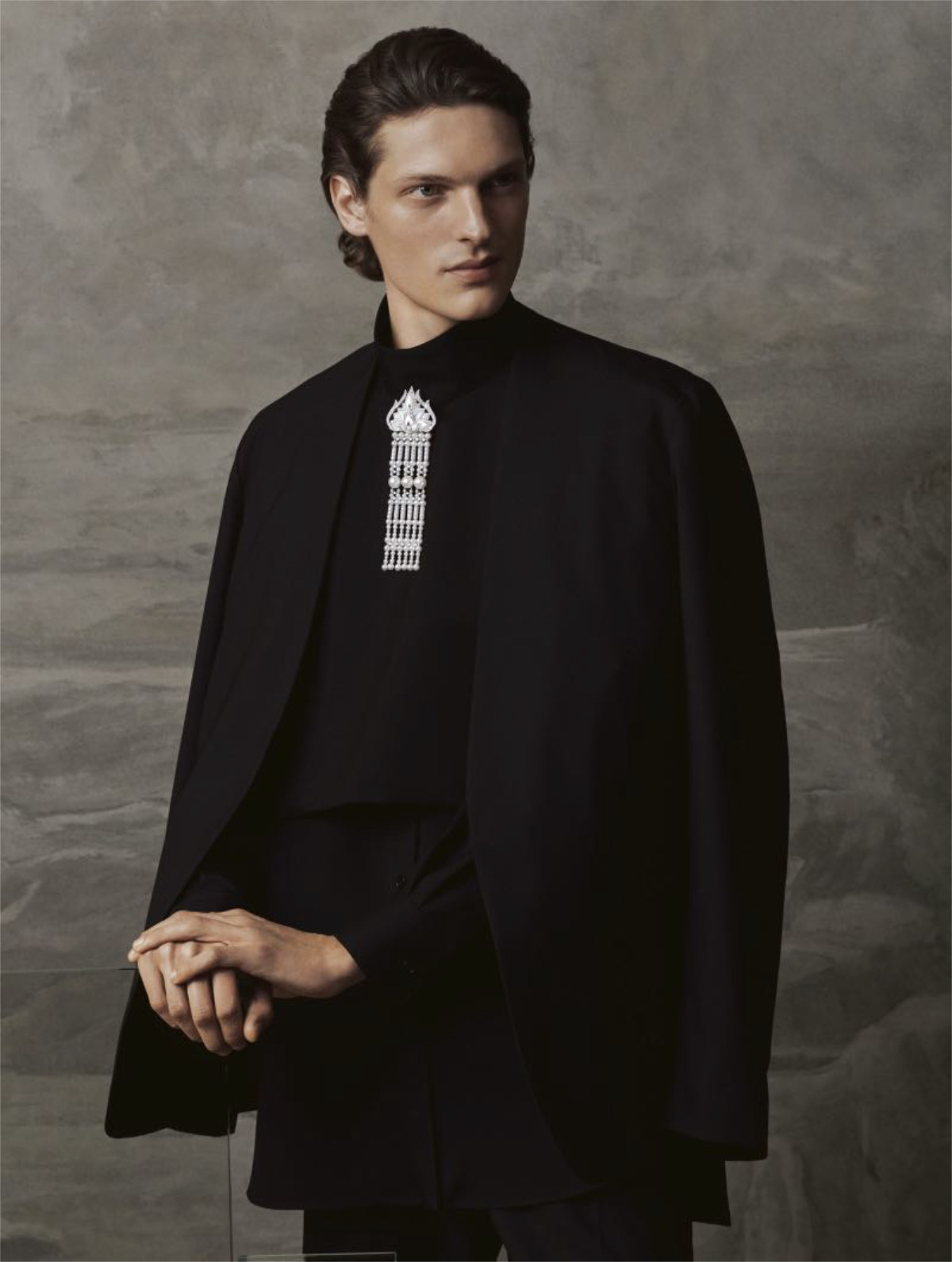 Brooch version of the New Maharani Nacre necklace set with a diamond of 0.71 ct, paved with diamonds, rock crystal and mother-of-pearl, with cultured pearls, in white gold. 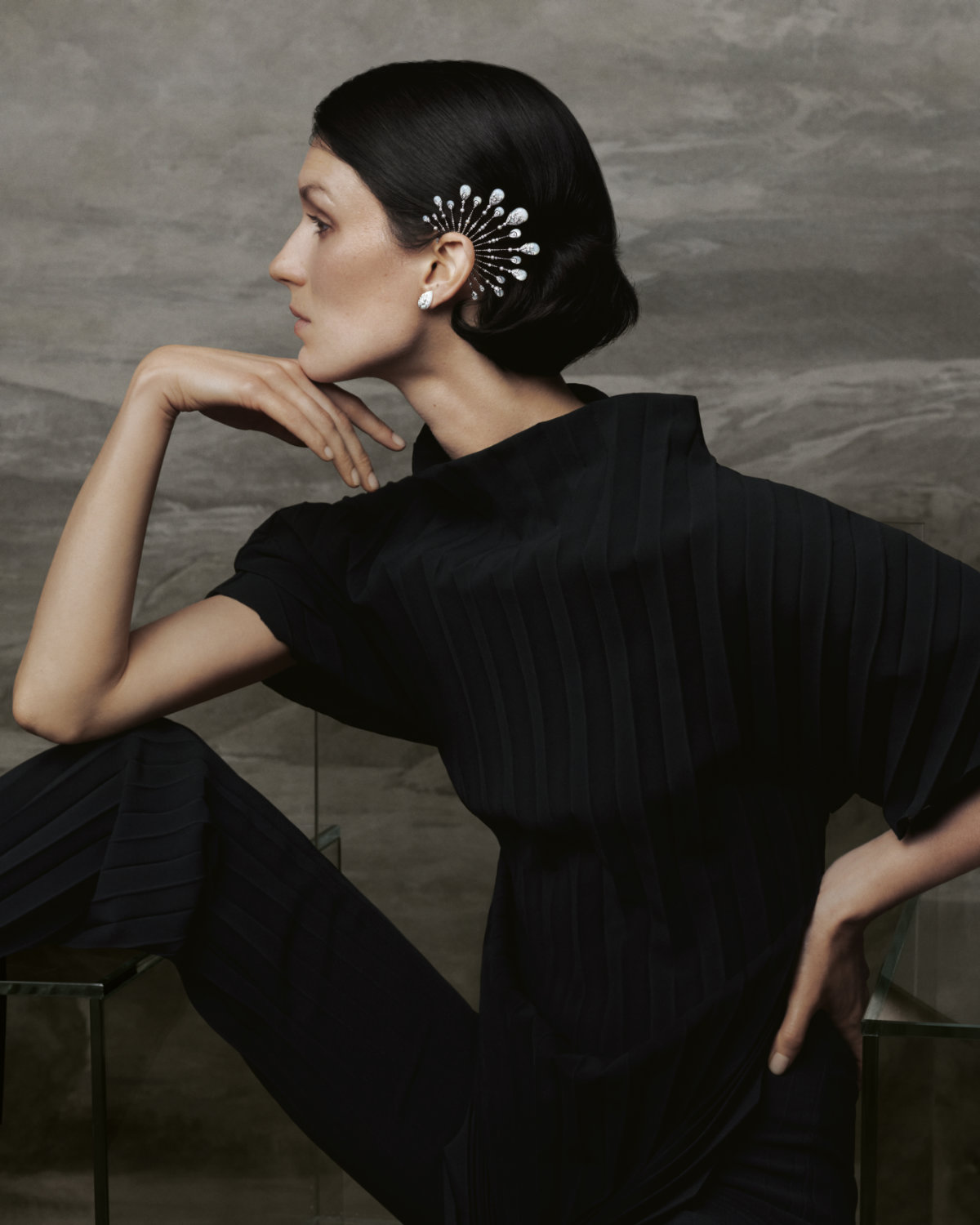 A symbol of purity in India, “Padma” means “Lotus”. Boucheron gives this sacred flower a contemporary dimension through this exclusive ear jewel. Like a reversed miniature necklace, this piece is to be laid on the ear. It shines its gold and pearl beams, ending with diamond and mother of pearl drops, engraved as a tribute to glyptics.

Along the same lines, Boucheron has created a pair of diamond and rock crystal earrings, engraved with the lotus motif, the pendants of which are detachable. 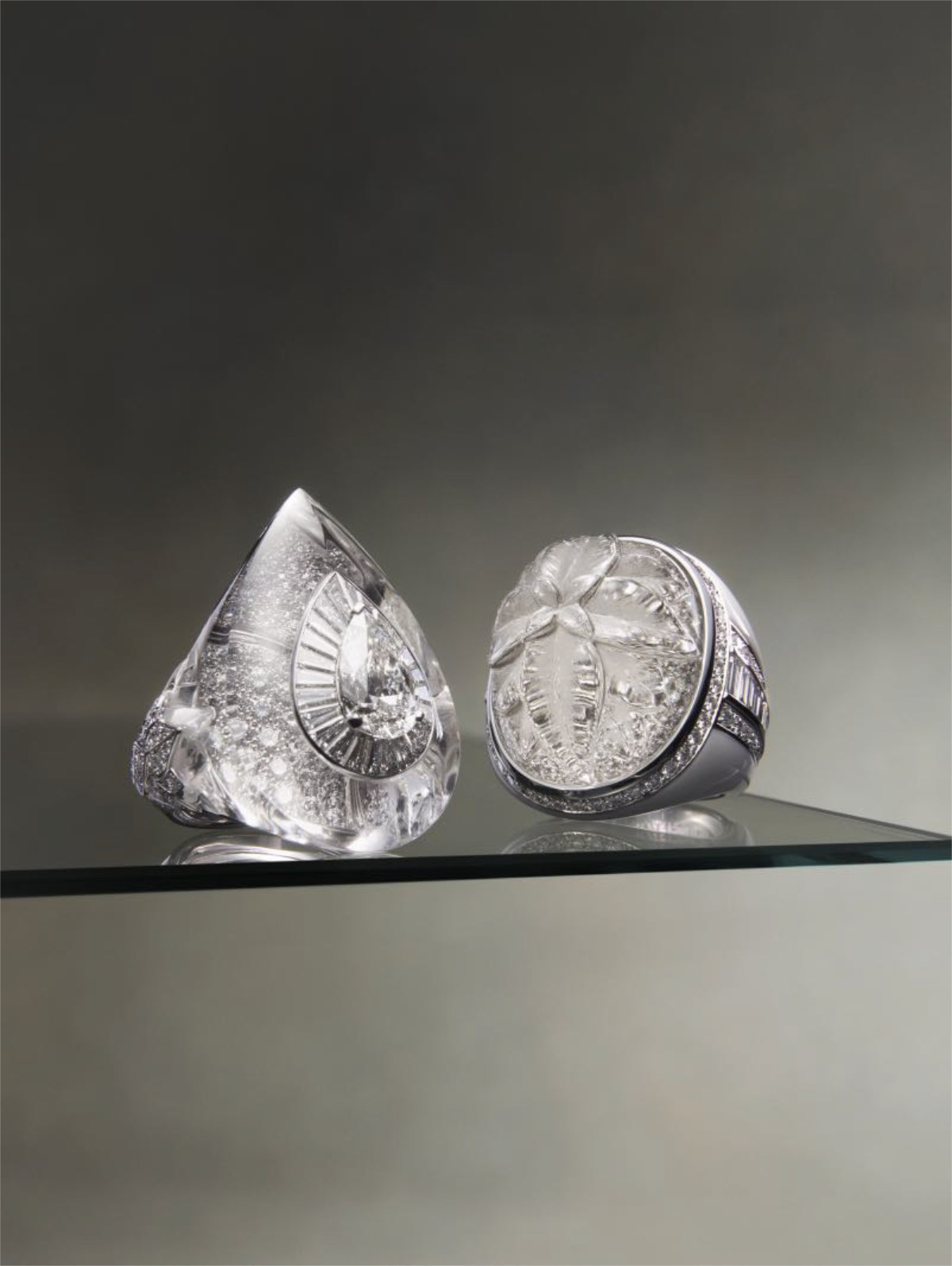 Two rings of radiant purity complete this set. The first one is a reference to Boucheron’s iconic Parfum ring. It displays a rock crystal dome, showing a lotus flower in transparency, shaped with the glyptics technique. This rock crystal dome is mounted on a spotless cacholong ring. The second ring was sculpted into rock crystal. Paved with round and baguette diamonds, it holds a pear-shaped diamond at its center. 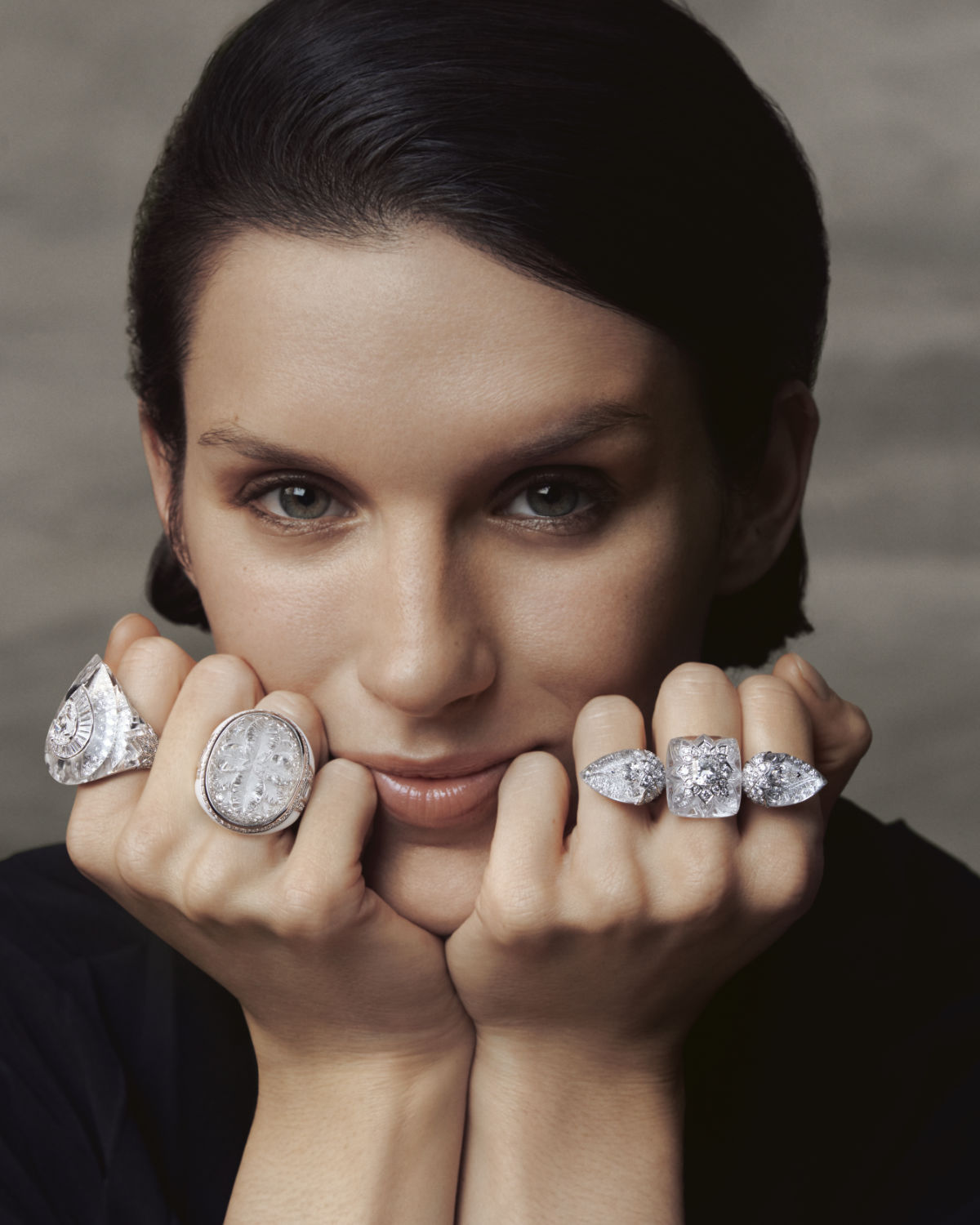 New Padma Diamants Ring set with a pear diamond of 2.01 ct, paved with diamonds and rock crystal, in white gold. 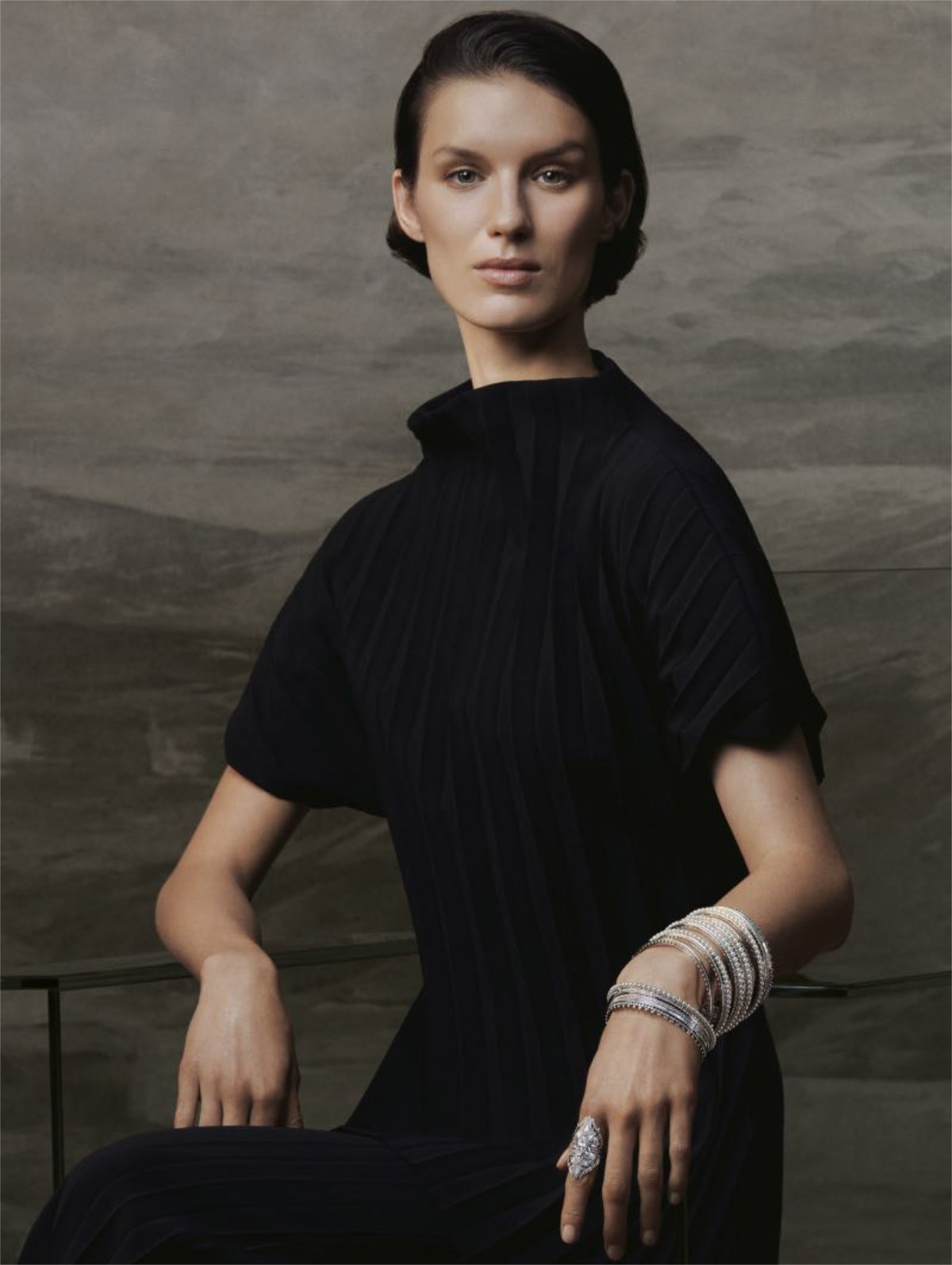 Worn by women when they get married, these “Churiyans” bracelets are considered tokens of protection. Boucheron has revisited these traditional ornaments by forging them in white gold set with diamonds, mother of pearl and pearls. Thanks to these different gems, these bangles offer a subtle palette of shades and textures, changing according to the way they are placed on the wrist.

Always inspired by the history of Boucheron, Claire Choisne has designed a mother of pearl bobbin to store these 10 bracelets when not worn, in line with the art pieces created by Boucheron. 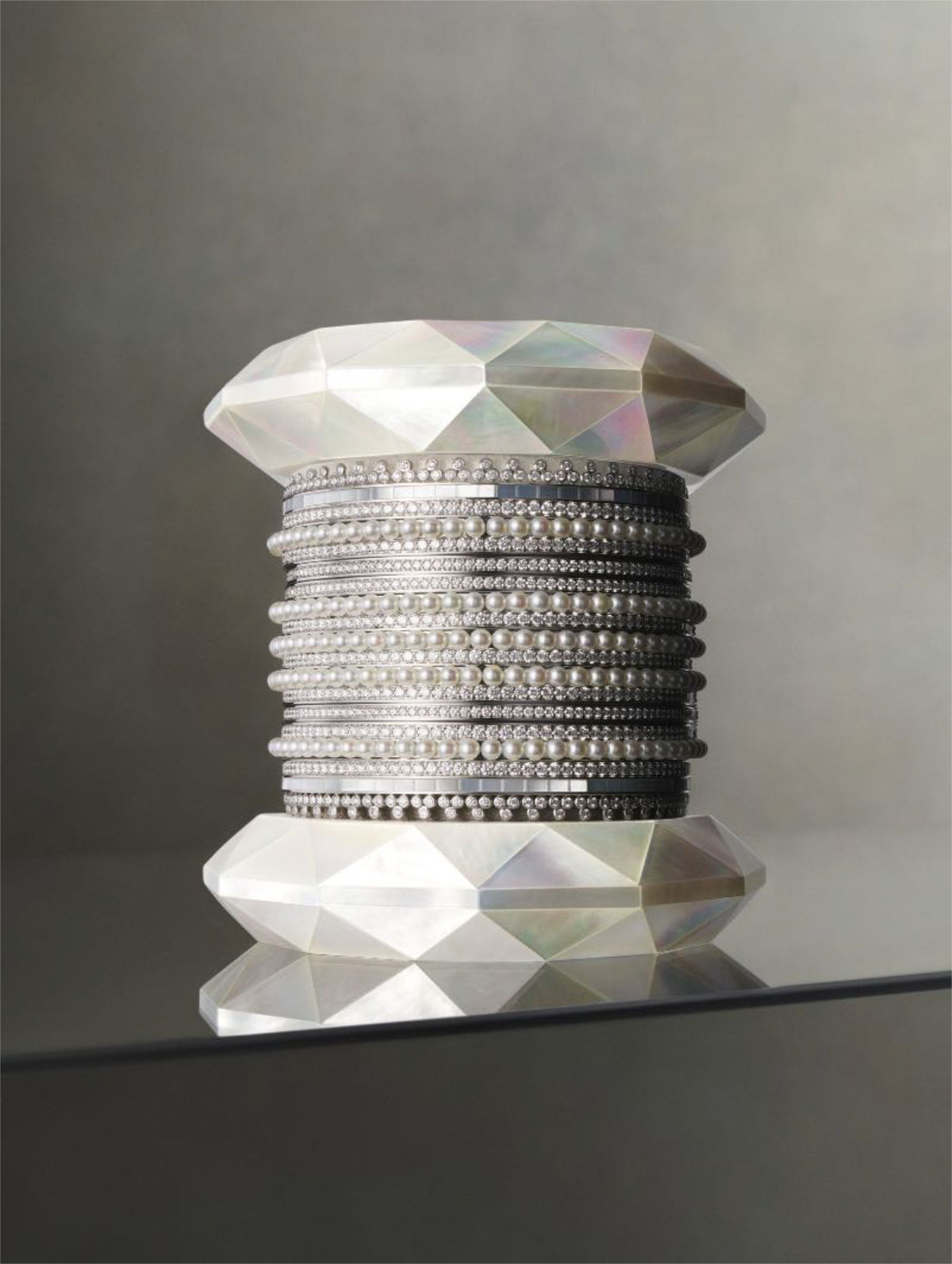 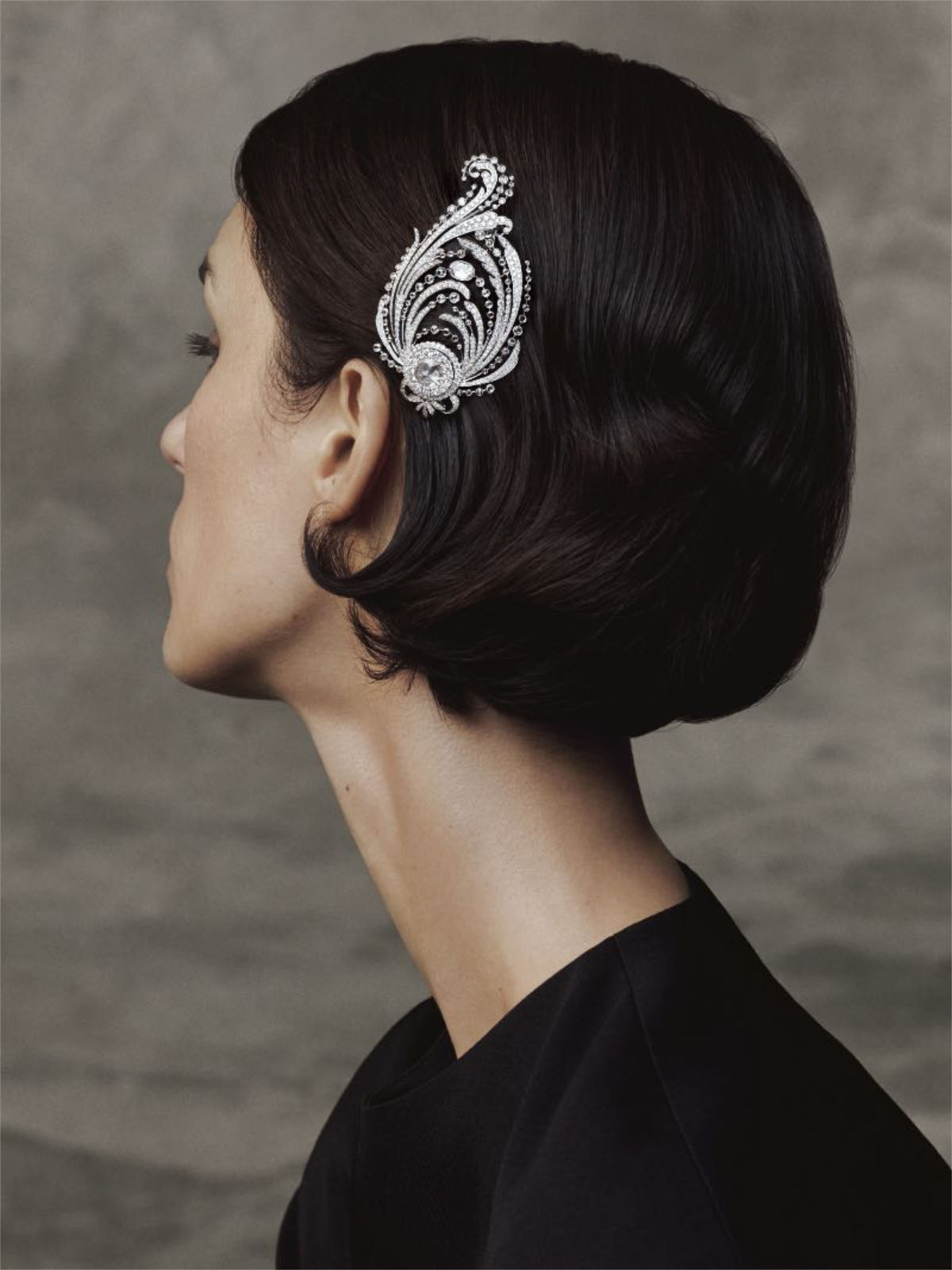 This turban ornament, called a «Sarpech», has become a hair jewel or a brooch, through Claire Choisne’s eyes. It is a contemporary interpretation of the aigrettes that Maharajahs proudly sported at the beginning of the last century. Set with diamonds, the curls of this piece are highlighted by the presence of rose-cut diamonds. 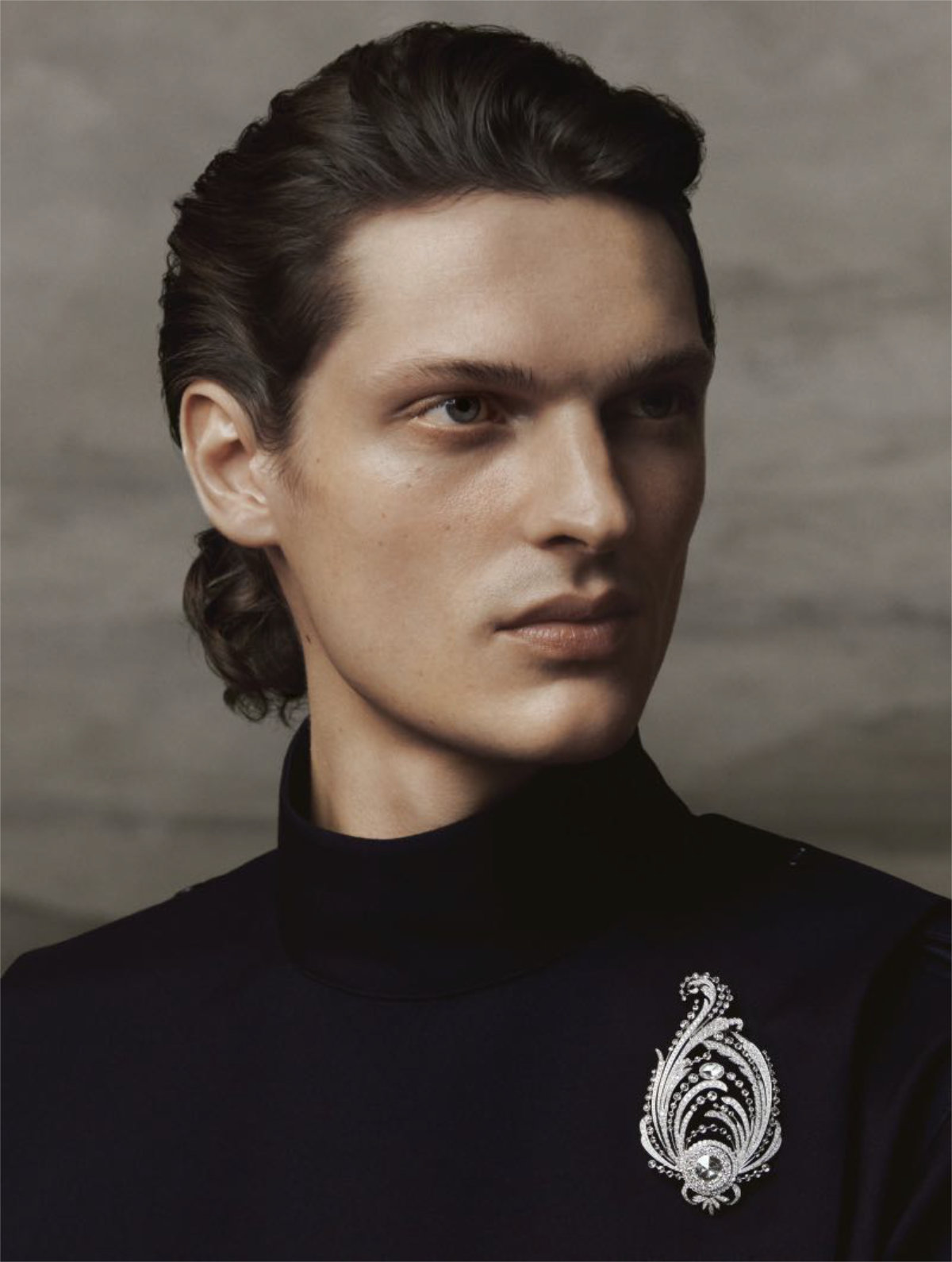 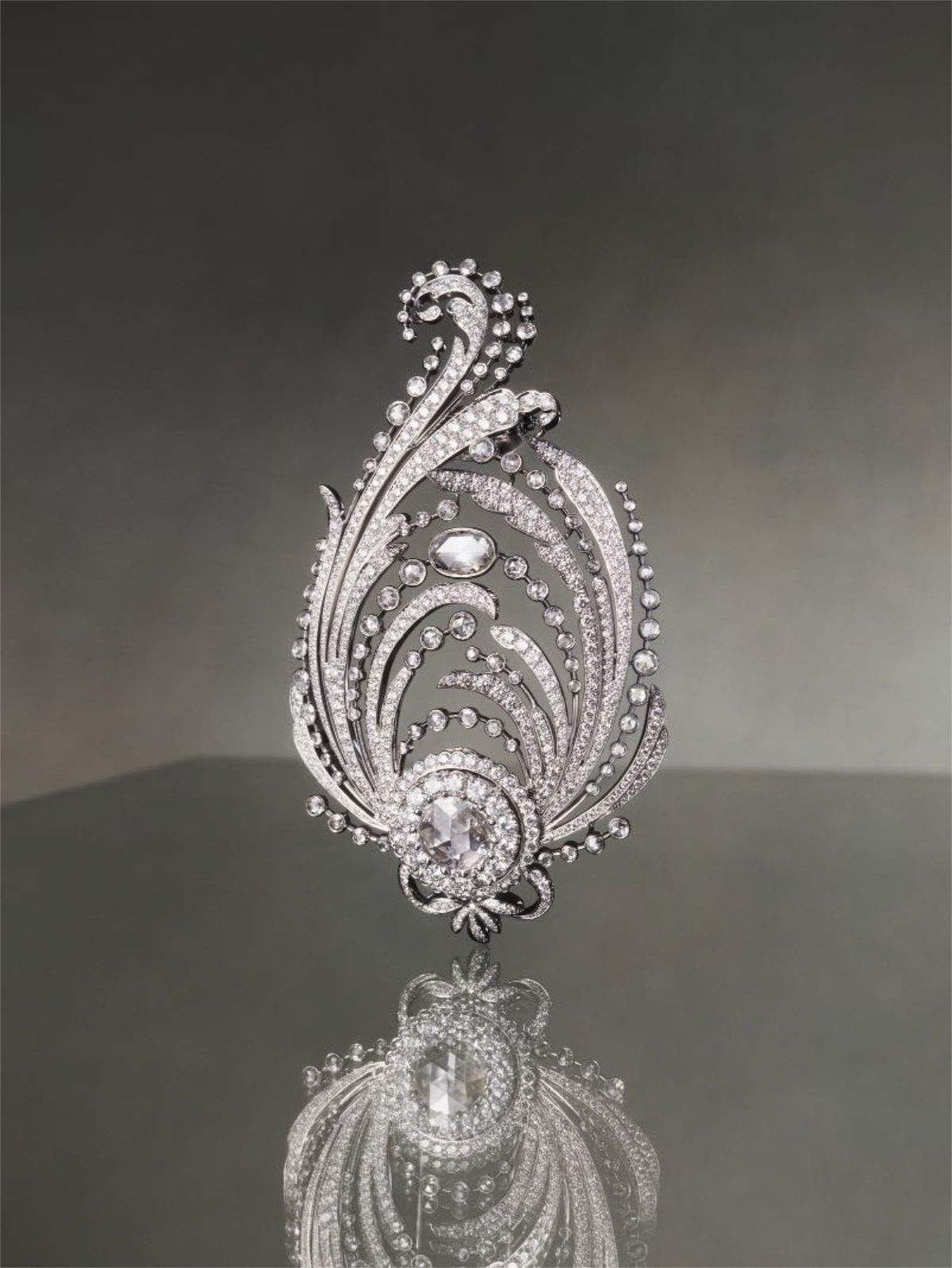 Created by Frederic Boucheron in 1858, Boucheron is built through four generations of direct descendants. Visionary designer and first of the great contemporary jewelers to open a boutique on Place Vendôme, Boucheron embodies excellence in Jewelry, High Jewelry and Watchmaking. The Boucheron style, free and audacious, continues to create the classics of tomorrow. There are currently more than 80 Boucheron boutiques across the world. Boucheron is part of the global Luxury group Kering.