A. Lange & Söhne presents two new versions of the award-winning mechanical digital watch in platinum and pink gold. Thanks to the evolved calibre L043.6, the exceptional timepiece now has a power reserve doubled to 72 hours and offers even greater convenience. The revolutionary design concept has been subtly reworked as well, enhancing its expressive style. Even though the minute-by-minute progression of the large jumping numerals may seem to be moved by magic, it is precisely controlled by a reliable calibre with seven patents.

In 2009, A. Lange & Söhne presented the first ZEITWERK to the amazement of the world of horology. The unprecedented wristwatch concept features large jumping numerals for the hours and minutes as well as a constant-force escapement as a beat controller. To this very date, the clear, avant-garde display of time is peerless. It underscores the manufactory’s ambition to constantly redefine the limits of technical feasibility. Company founder Walter Lange repeatedly urged the need “to never stand still”. Following this maxim, the watchmakers at A. Lange & Söhne regularly question conventional concepts and pursue new innovative approaches to promote the development of precision watchmaking. 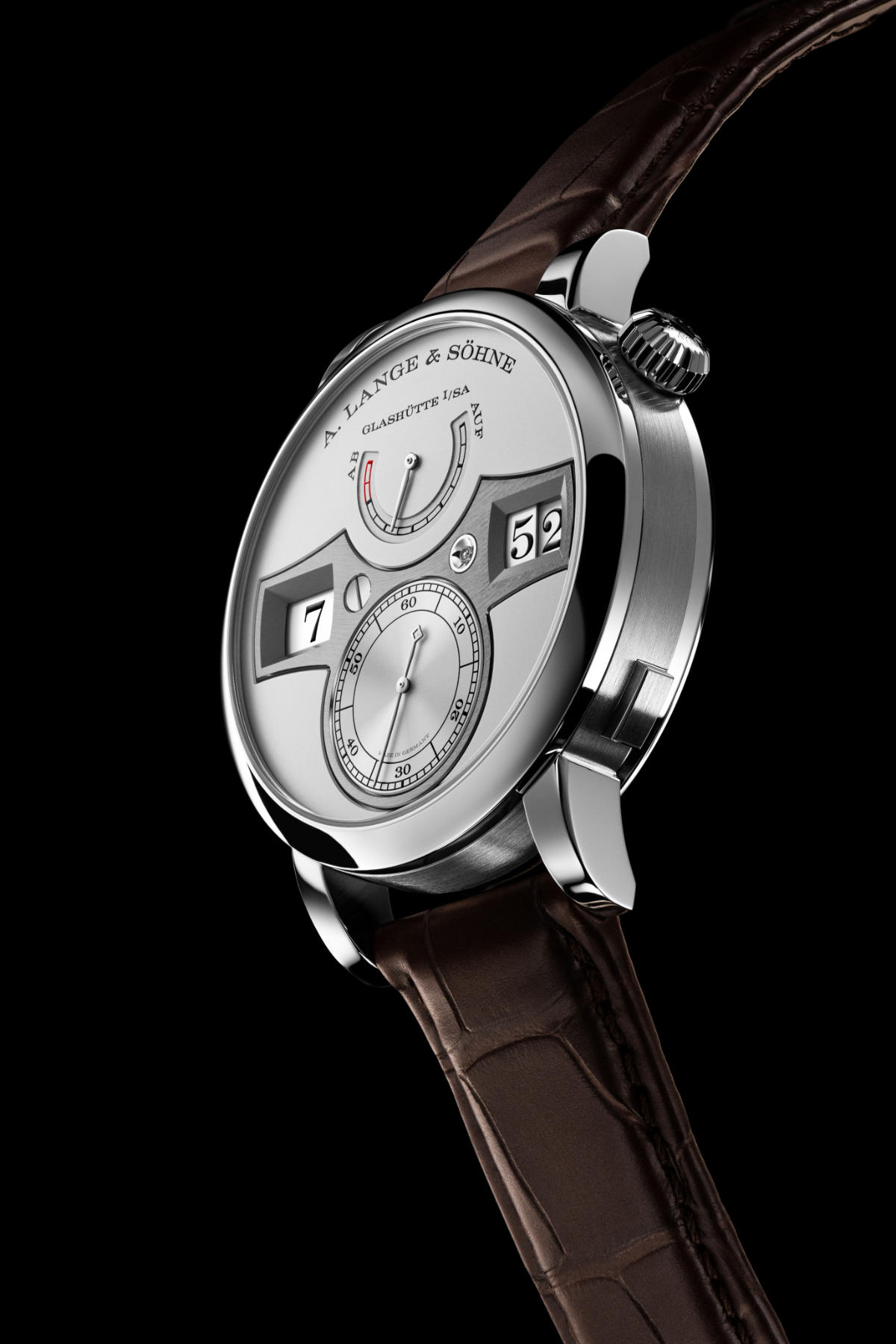 Historic inspiration: from the five-minute to the one-minute rhythm

This innovative approach is closely intertwined with the tradition of our manufactory. For the ZEITWERK, the master watchmakers at A. Lange & Söhne took their inspiration from the famous five-minute clock at the Semper Opera House in Dresden. At the time, court clockmaker Johann Christian Friedrich Gutkaes was commissioned to create it. He was asked to develop a time display that would be easily legible even from the rearmost seats. It was a challenge that forced Gutkaes to rethink the assignment. Contrary to all large-format clocks with hands, he opted for a revolutionary solution: a clock that displayed the time digitally in five-minute steps. In 1841, he completed the five-minute clock with his co-worker Ferdinand Adolph Lange. The unusual idea behind this clock was transposed to the ZEITWERK, even though it switches five times more often than its source of inspiration, namely once per full minute. 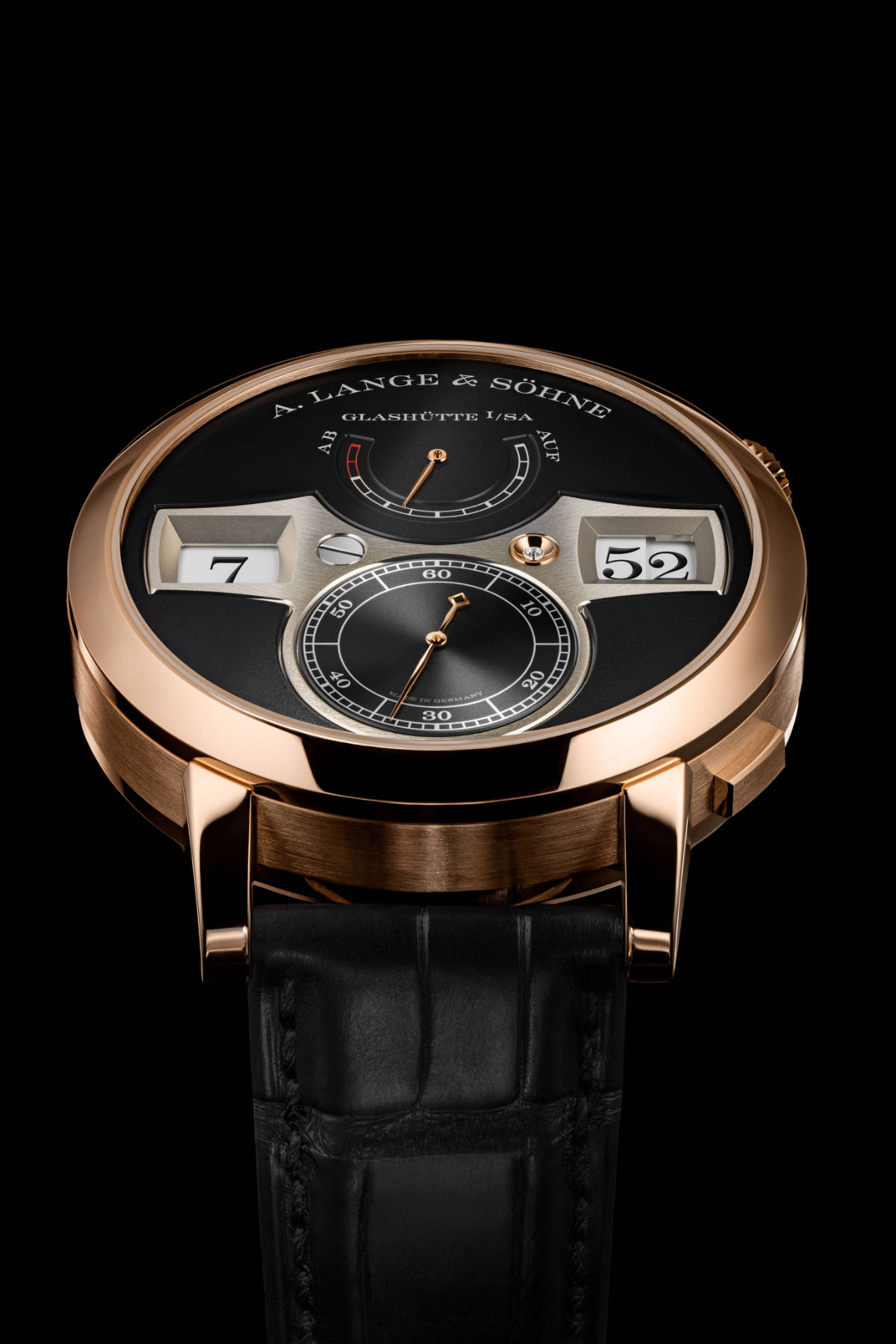 Hours and minutes at a glance

The ZEITWERK has a patented mechanism with three jumping numeral discs that make a glance at the watch a special experience. The hours and minutes are displayed from left to right by large-format numerals that are 2.9 millimetres high and 2.3 millimetres wide. The harmonious arrangement on the curved time bridge and the size of the displays ensure superb legibility. Additionally, this aesthetically original and technically elaborate display endows the dial with vibrancy and verve because the underlying mechanism switches the three numeral discs – one displays the hours, the other two display the units and the tens digits of the minutes – within fractions of a second. The most exciting event happens at the top of the hour when all three numeral discs are simultaneously advanced by one increment. With this precise choreography, the moment becomes the event. 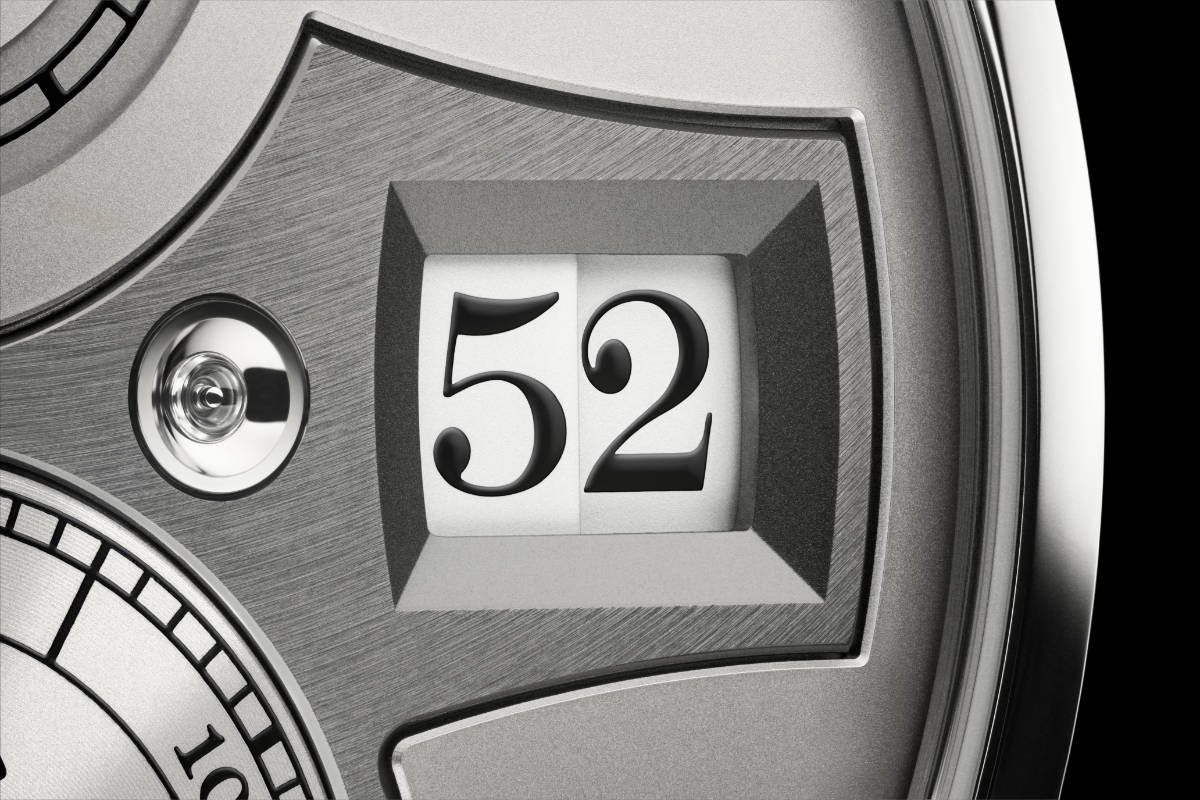 To create this lucid and innovative display, Lange’s designers questioned the conventional principles and rules of precision watchmaking afresh. This was necessary, because the challenge of fitting the mechanism in the limited dimensions of a wristwatch and at the same time providing enough energy to produce the synchronised switching steps was enormous. Some key figures make this impressively clear: For instance, the hour ring with a diameter of 30.0 millimetres extends to the outer circumference of the movement. In addition, there are two discs – the tens-minute and units-minute discs. Their diameters are 19.0 and 12.7 millimetres, respectively. Both discs are separated by a height difference of merely 0.2 millimetres, which calls for highly precise settings by the watchmaker. 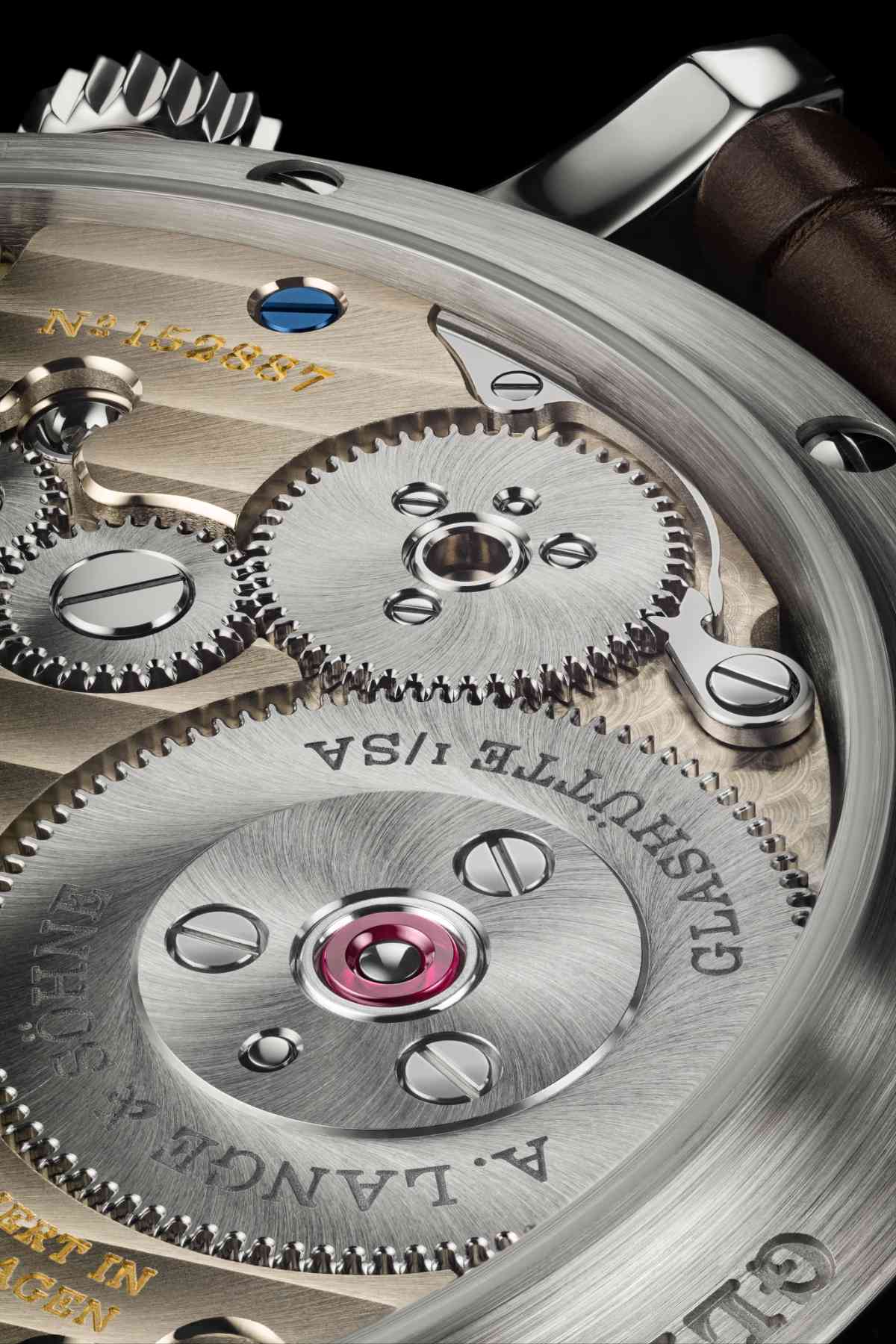 “To switch the discs of the jumping numerals mechanism to forward on time every minute, the movement requires much more energy than a classic time display,” explains Anthony de Haas, Director of Product Development. “Not only are the numeral discs very heavy by watchmaking standards, but they also have to be quickly accelerated and braked again. This calls for considerably higher forces than the uniform rotation of a pair of hands of much less weight. The greatest amount of energy is needed at the top of the hour when the movement advances all three discs at the same time.”

Also, the incremental step must be executed precisely after 60 seconds. This challenging operation is handled by the patented constant-force escapement. As a multitalented device, it even makes a further contribution: It assures that the movement is also powered by a uniform amount of force; this benefits rate stability. 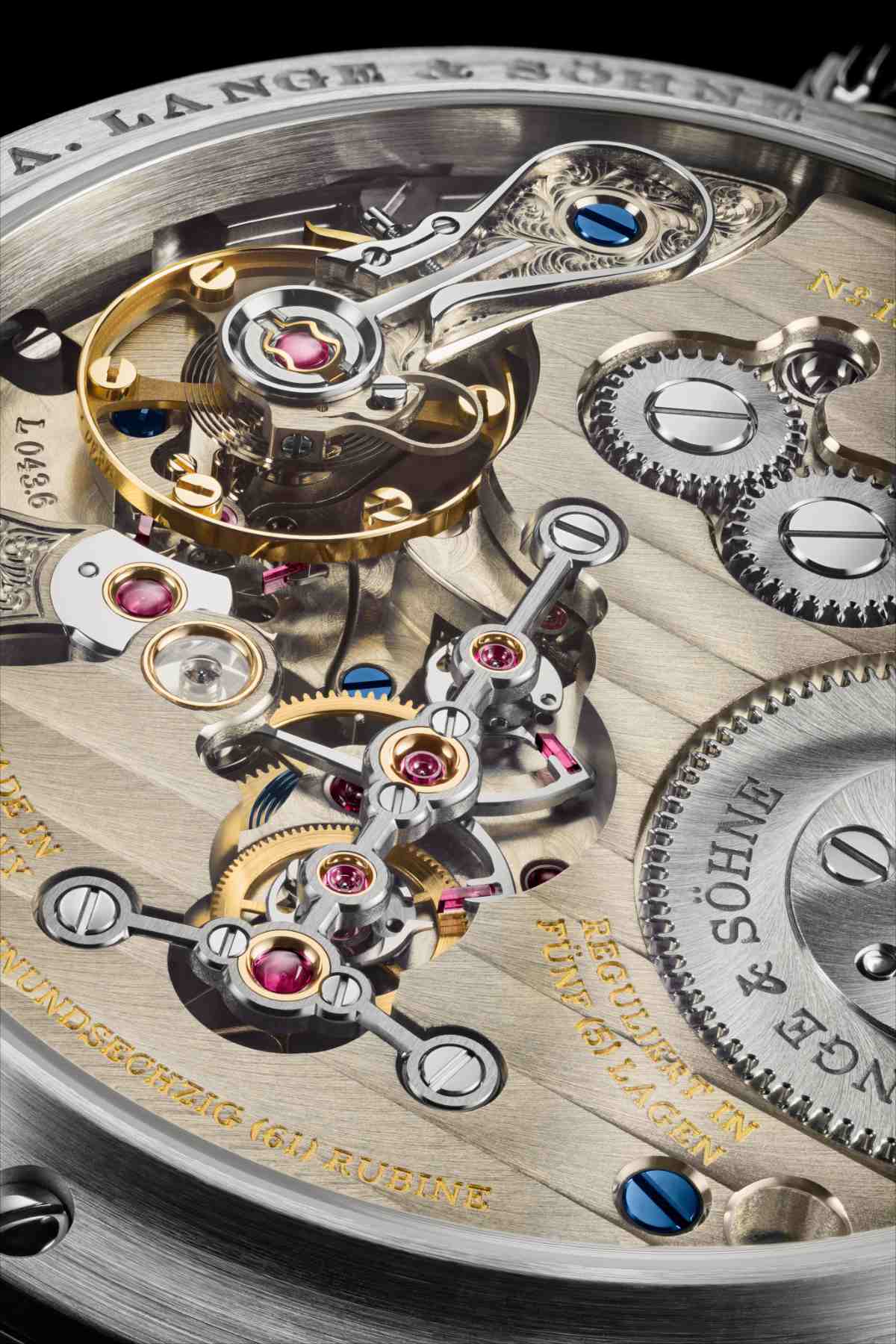 The calibre L043.6 – the second generation of a mechanical masterpiece

While these challenges were already intelligently mastered by the first-generation ZEITWERK, the new generation goes a step further with the refined calibre L043.6.

Thanks to a patented barrel design with two mainsprings, it was possible to double the power reserve from 36 to 72 hours. Or, to express it with other numbers: When fully wound, the ZEITWERK now has sufficient energy to perform 4,320 minute jumps or, more precisely, 72 jumps with all three discs, 360 jumps with only two discs, and 3,888 jumps with only one disc. Another improvement versus the predecessor model is the simplified setting of the hour. A pusher at four o’clock can now separately advance the display, which is particularly useful when the time zone changes during a trip. The pusher is an inverted type: Nothing happens when it is pressed but the display switches forward when the pusher is released. 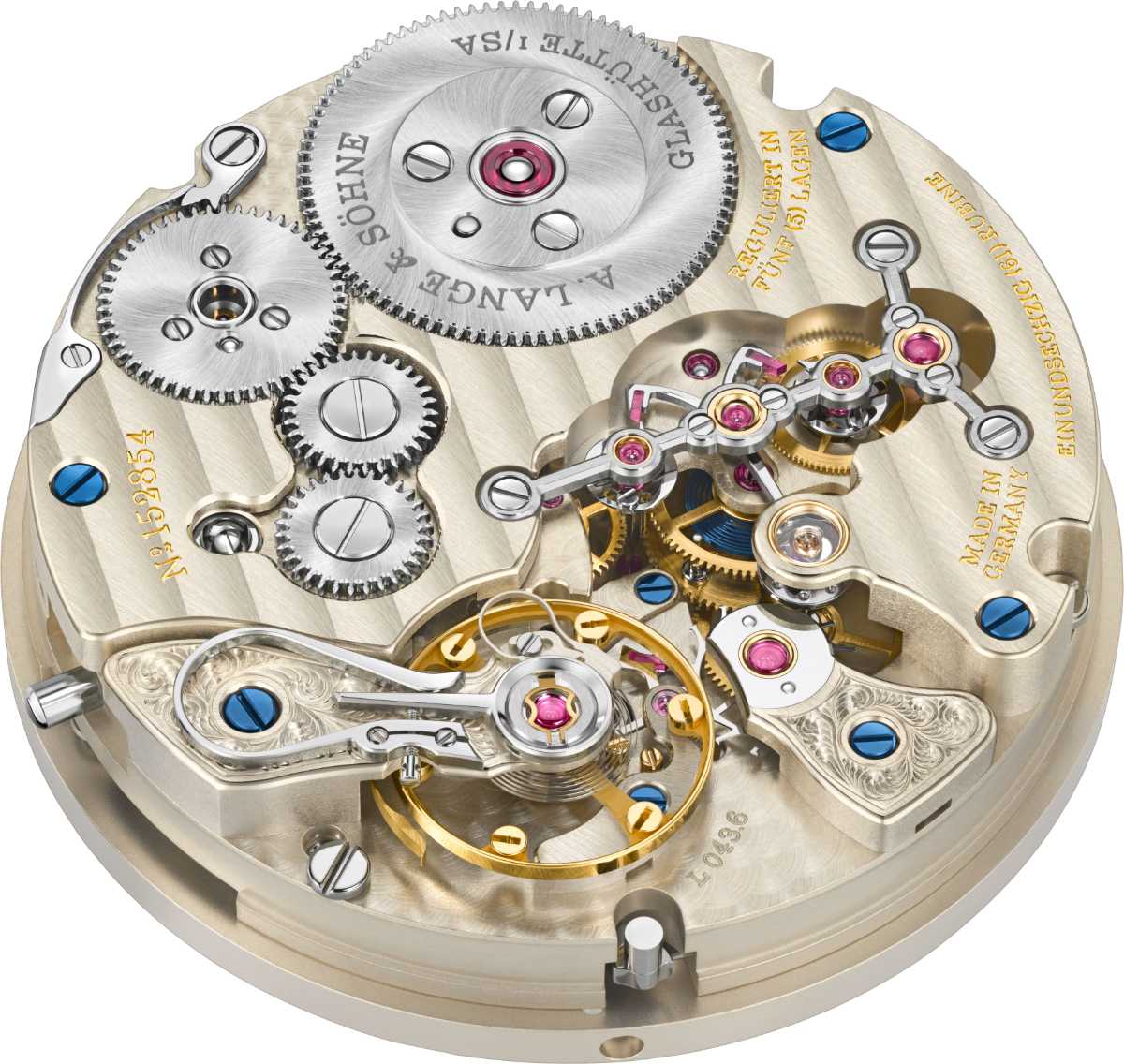 The integration of a pusher for correcting the hour indication, first introduced in the ZEITWERK DATE, required considerable constructional effort. To enable the correction independently of the switching cycles of the time indication, a patented vertical clutch uncouples the hour ring from the jumping numerals mechanism each time the pusher is pressed. The setting of the minute indication in both directions is still performed with the crown at two o’clock.

In its second generation, the ZEITWERK also features an oscillation system with its own balance spring and patented beat-adjustment system. It oscillates with a frequency of 18,000 semi-oscillations per hour (2.5 hertz). As with all of the manufactory’s calibres, the artisanal finissage of the 451-part movement complies with the most ambitious Lange standards. With a glance through the sapphire-crystal caseback, connoisseurs can admire the hand-engraved balance and escape-wheel cocks, the solarised winding wheels, the 59 jewels, and the intricate, straight-grained remontoir bridge that accommodates two recessed, screwed gold chatons. 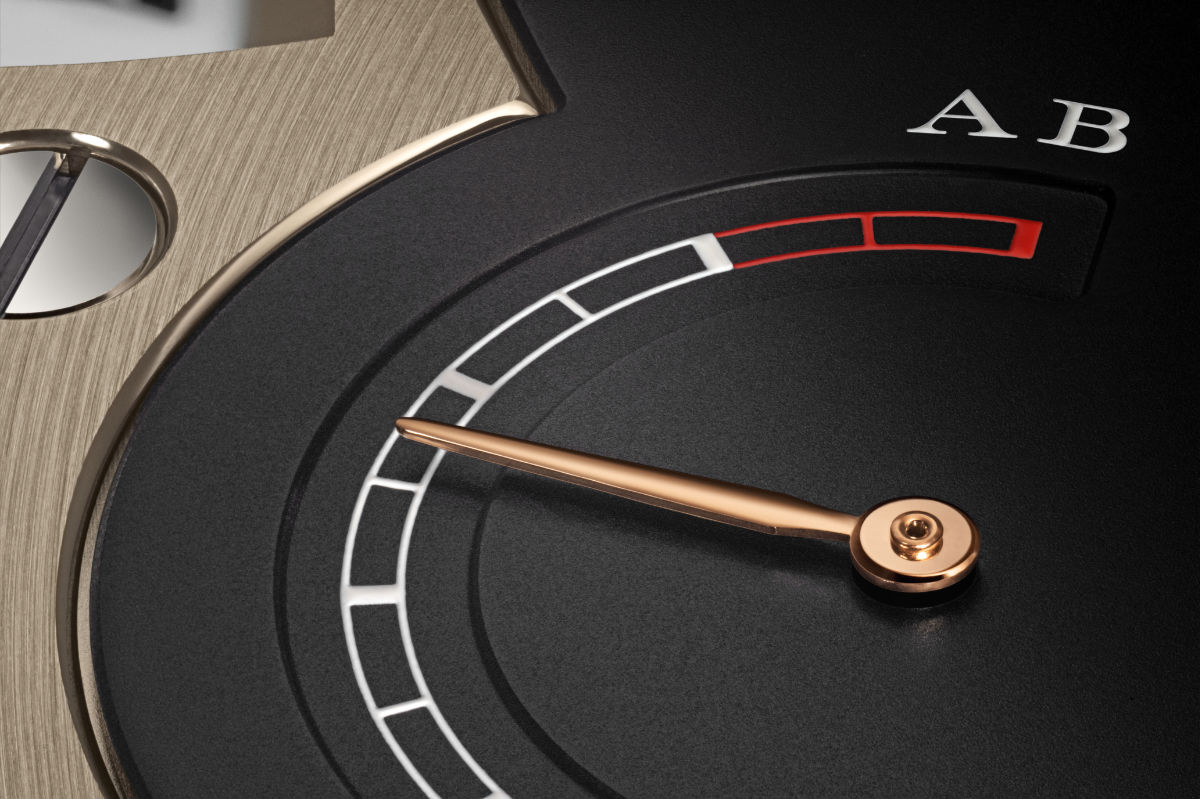 Inimitable – in design as well

Watch enthusiasts often refer to the dial as the face of a timepiece. It not only reflects the designers’ aesthetic perceptions but also the skills of the movement engineers. This applies in particular to the ZEITWERK: Its innovative technical concept is expressed by progressive design.

The most prominent element is the time bridge made of German silver. The material, traditionally used by A. Lange & Söhne for frame parts such as bridges and cocks, makes it clear that it is an integral component of the movement. In the new ZEITWERK, it was subtly reworked to make more room for the subsidiary seconds dial at six o’clock. In the scale of the power-reserve indicator on the opposite side, harmoniously positioned above the round of the time bridge, the last twelve hours are now marked in red to clearly indicate that the tension of the mainsprings is gradually waning.

The sapphire bearing jewel for the ones- and tens-minute ring to the left of the two indications is a refined detail that also builds a bridge to the movement. In most cases, rubies are used for bearing jewels, but in this case, Lange’s watchmakers chose this colourless, transparent precious stone for aesthetic reasons. 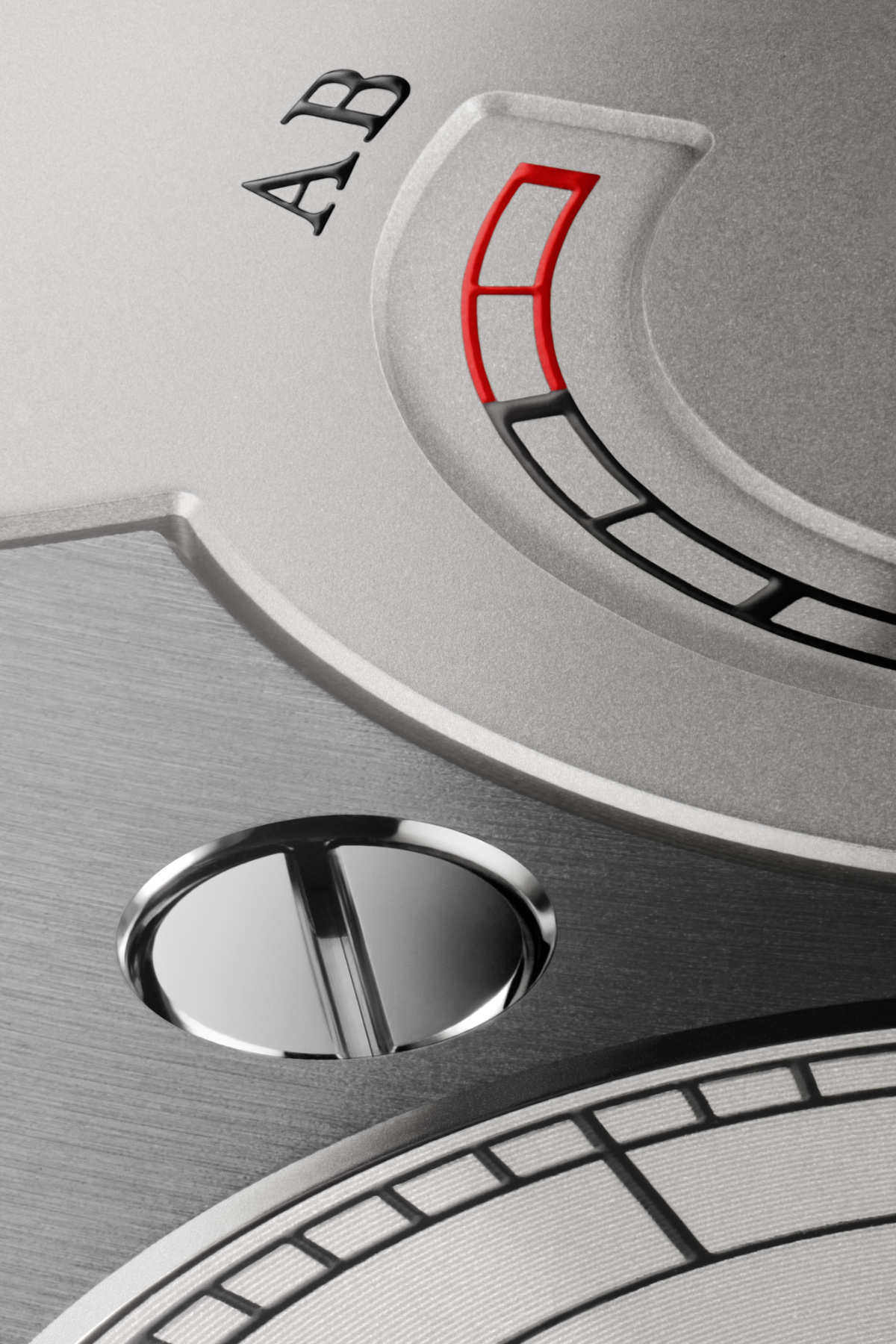 The new ZEITWERK has a case diameter of 41.9 millimetres and a height of 12.2 millimetres. It is available in two versions. It comes in pink gold with a black dial and a time bridge made of untreated German silver. The platinum edition has a rhodié dial made of solid silver. The time bridge is black rhodiumed. Colour-matched hands round out the harmonious design. The pink-gold model has a black alligator leather strap while the platinum version is paired with a dark-brown alligator leather strap. 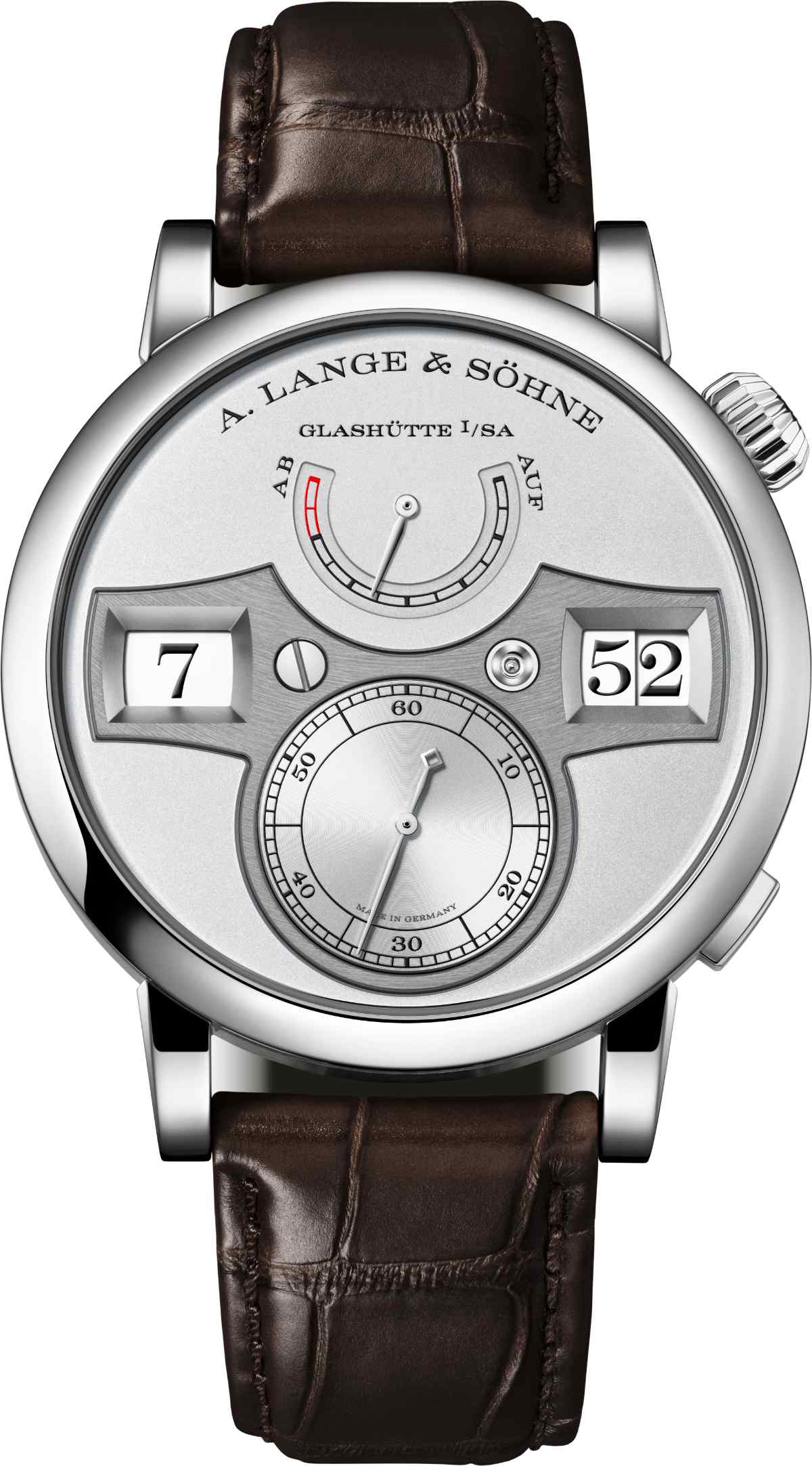 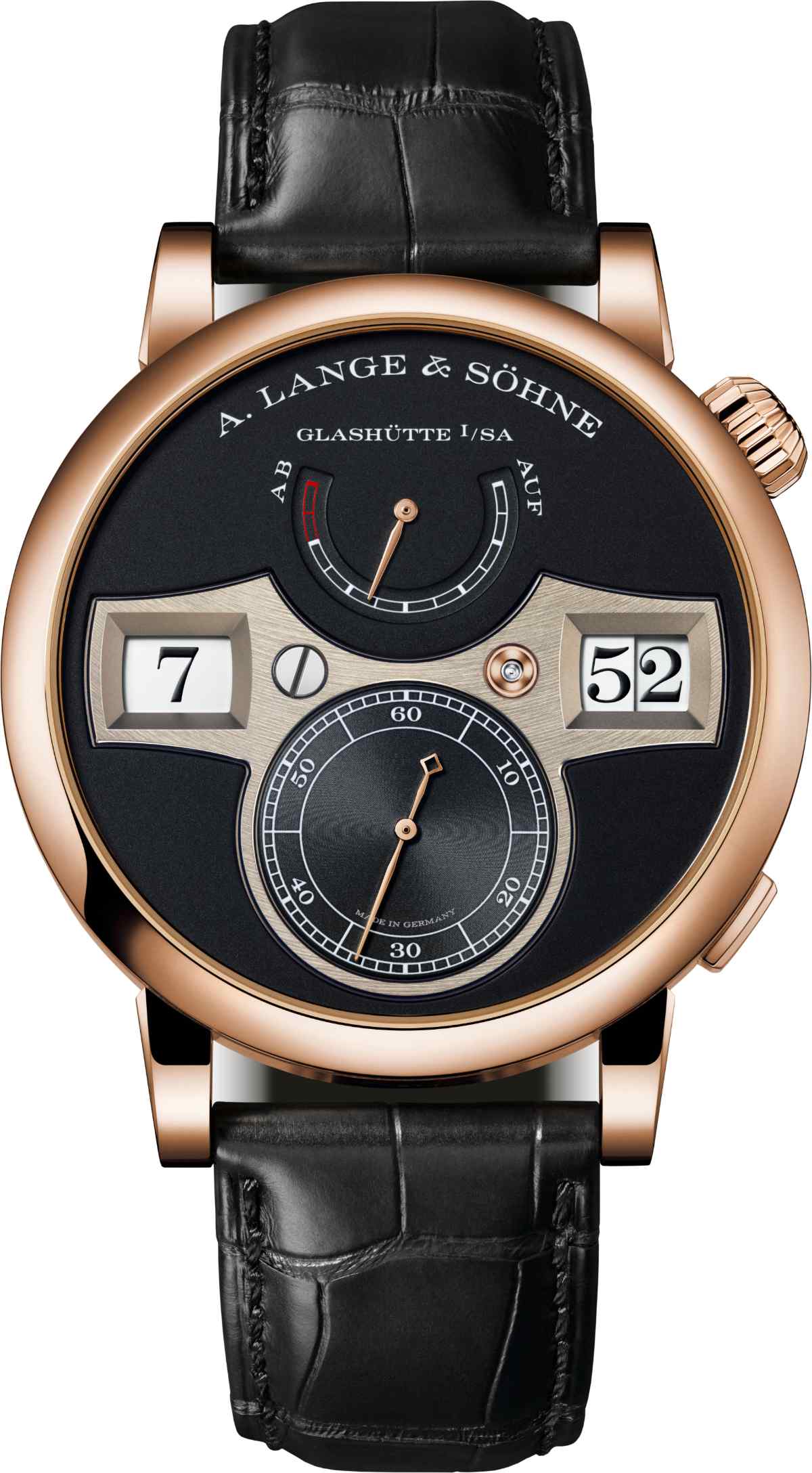 Dresden watchmaker Ferdinand Adolph Lange laid the cornerstone of Saxony’s precision watchmaking industry when he established his manufactory in 1845. His precious pocket watches remain highly coveted among collectors all over the world. The company was expropriated after the Second World War, and the name A. Lange & Söhne nearly vanished. But in 1990, Walter Lange, Ferdinand Adolph Lange’s great-grandson, ventured to start over again. Today, Lange crafts only a few thousand wristwatches, mainly in gold or platinum, per year. They are endowed exclusively with proprietary movements that are lavishly decorated and twice assembled by hand. With 70 manufacture calibres developed since 1990, A. Lange & Söhne has secured a top-tier position among the world’s finest watch brands. Its greatest successes include brand icons such as the LANGE 1, the first regularly produced wristwatch with an outsize date, and the ZEITWERK, with its precisely jumping numerals. Extraordinary complications such as the ZEITWERK MINUTE REPEATER, the TRIPLE SPLIT and the so far most complicated model, the GRAND COMPLICATION, introduced in 2013 in a limited edition of six, represent what the manufactory always strives for: to drive the traditional art of watchmaking to ever-new heights. The sporty yet elegant ODYSSEUS, introduced in 2019, marked the start of a new chapter for A. Lange & Söhne.