Is it any coincidence if Edith Piaf sang that she saw life as being rose? This flower, with its pink colour, as a symbol of both romantism and daring, has always played a part with Nina Ricci. In the sillage of Nina and Nina Rouge, Nina Rose makes for condensed optimism. Chiming with the codes injected by Rushemy Botter and Lisi Herrebrugh, the new artistic directors of Nina Ricci, the world of Nina Rose is at once tender and sparkling, while being tinged with irreverence.

It tells of an impertinent, vibrant femininity. Cool couture. 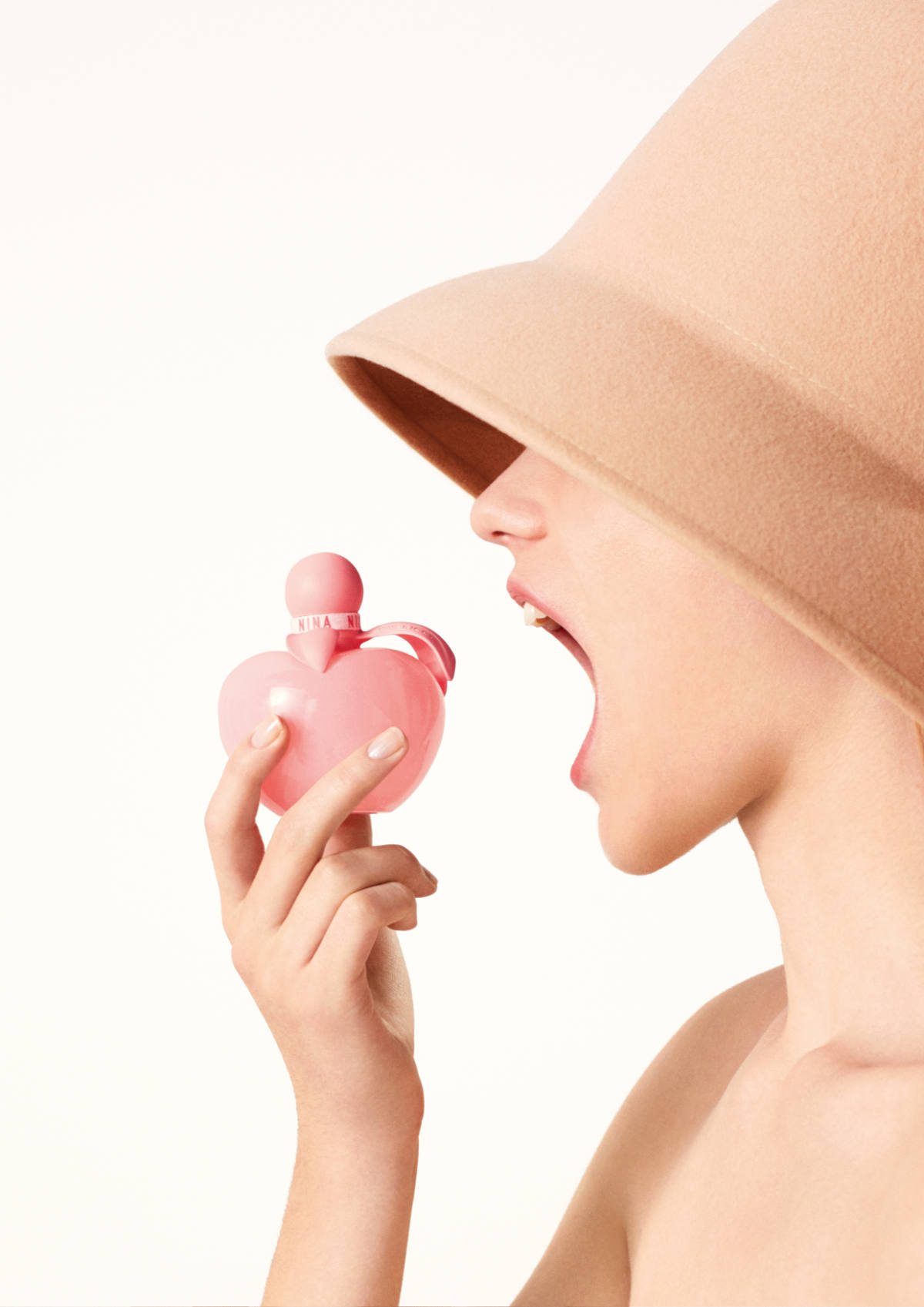 A rosy pink, of course, but not just any kind. The one that decks the bottle of Nina Rose is a candy, ultra-glossy pink on the glass, chiming with a bubble-gum spirit as seen during the Maison Nina Ricci SS20 parade. From the neck to the pack, a ribbon stamped “Nina” sets its seal on this new olfactory creation. 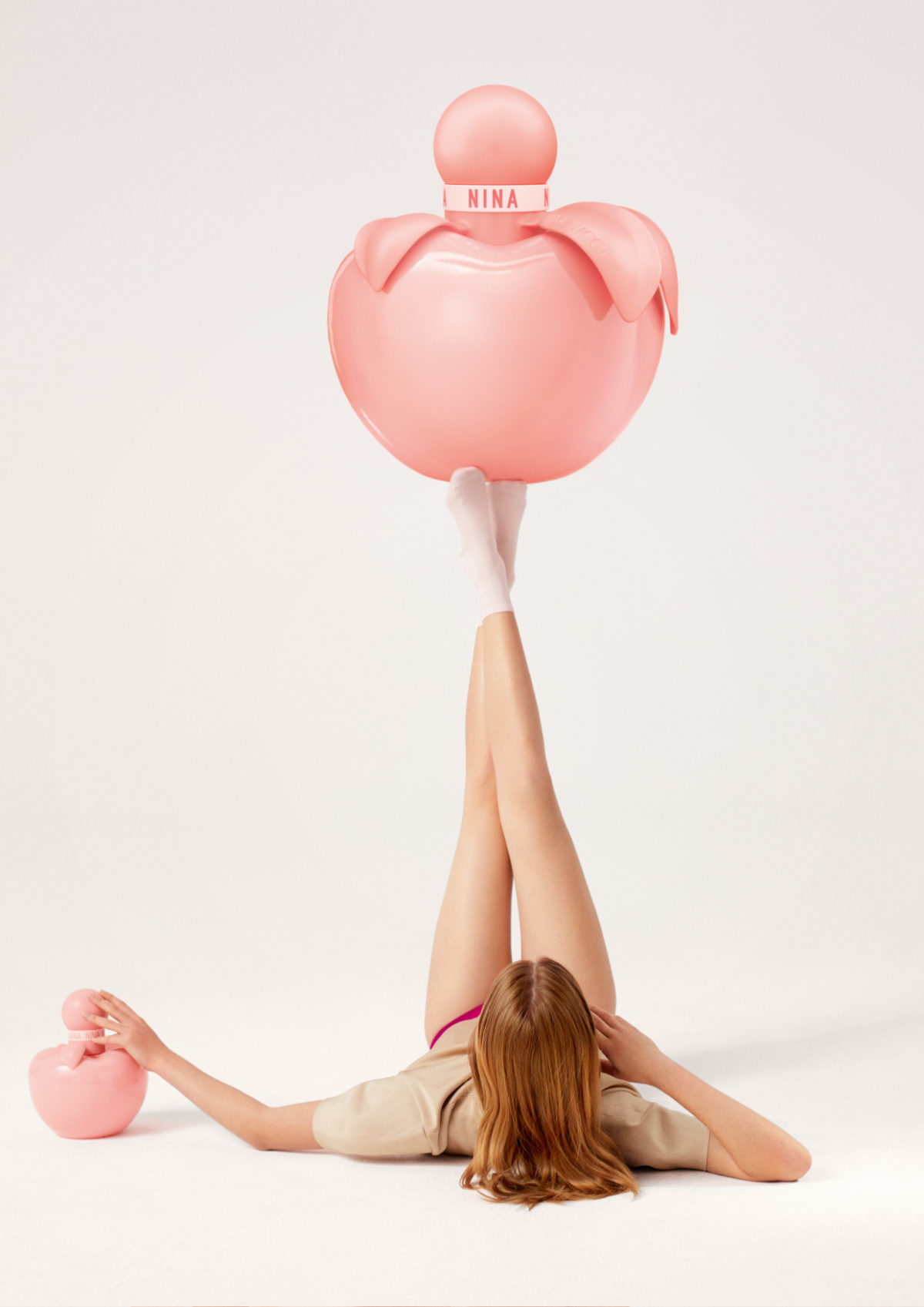 After composing Nina and Nina Rouge, the master perfumer Olivier Cresp has conceived this new, deliciously Ricci-style eau de toilette. Nina Rose is a fresh gourmandise tinged with irreverence and brightness. This grand floral fragrance is giving an original breath of air to Nina’s olfactory story.

Bold and sparkling bergamot and lemon join with the juiciness of pear to create a luminous, ultra-fresh accord. This acidic touch melts into the velvety softness of orange blossom absolute and neroli essence, while being exalted by a note of jasmine. And as the tenderness of this floral bouquet is extended into a wave of addictive musks, Virginian cedarwood then gives the composition its added modernity. 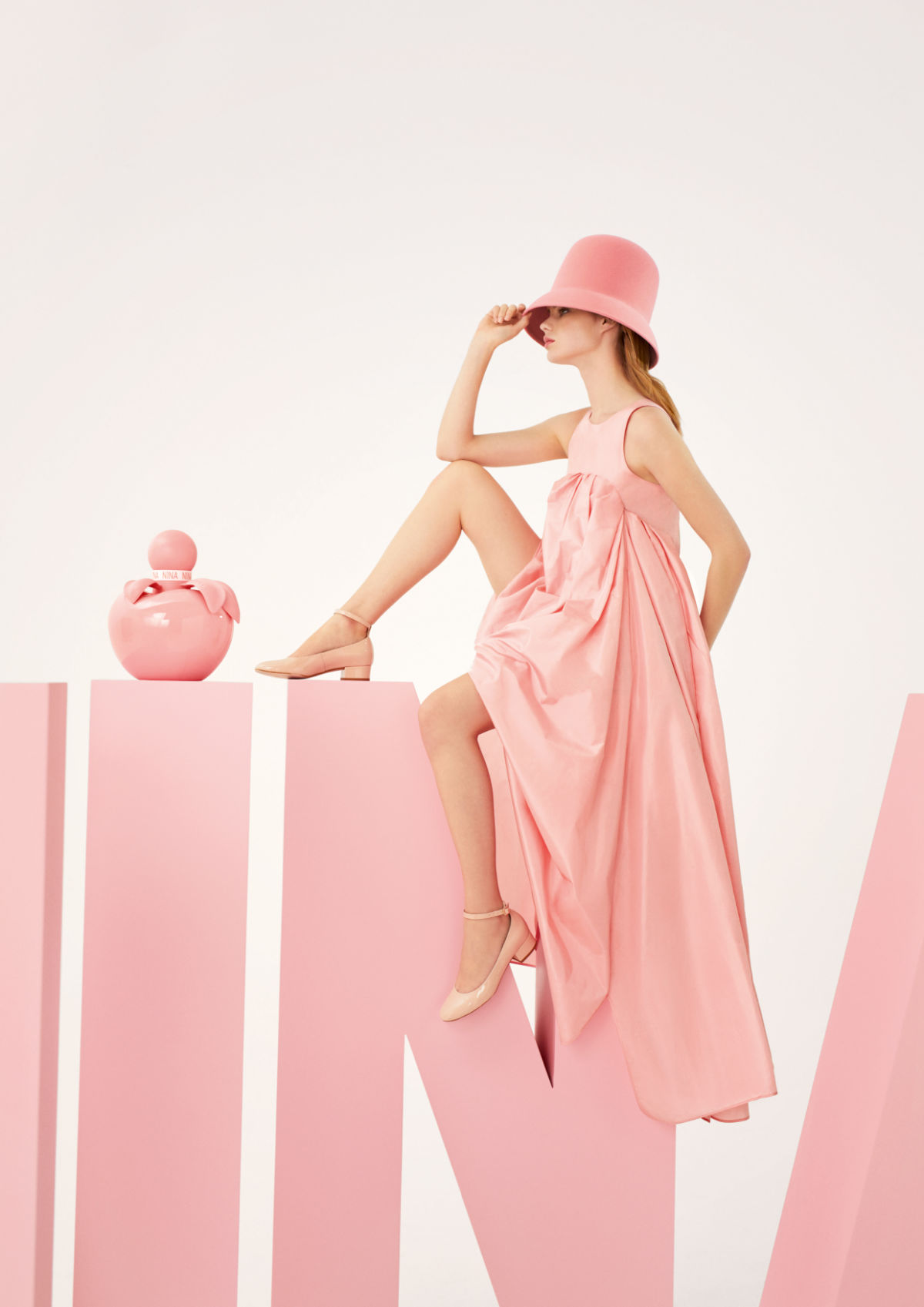 Everything about it is terribly Nina.

After embodying Nina Ricci’s emblematic heroine in campaigns for Bella and Nina Rouge, the Dutch model Estella Boersma is lending her face to Nina Rose. Here she is in a dress by Nina Ricci. She can be recognised thanks to her lacquered mouth, and eyes concealed not by one, nor two, but by a stack of three cloche hats. Accessories with pop tones, whose accumulation is a joyful sign of irreverence. More than ever, life is a game, à la Nina Ricci. 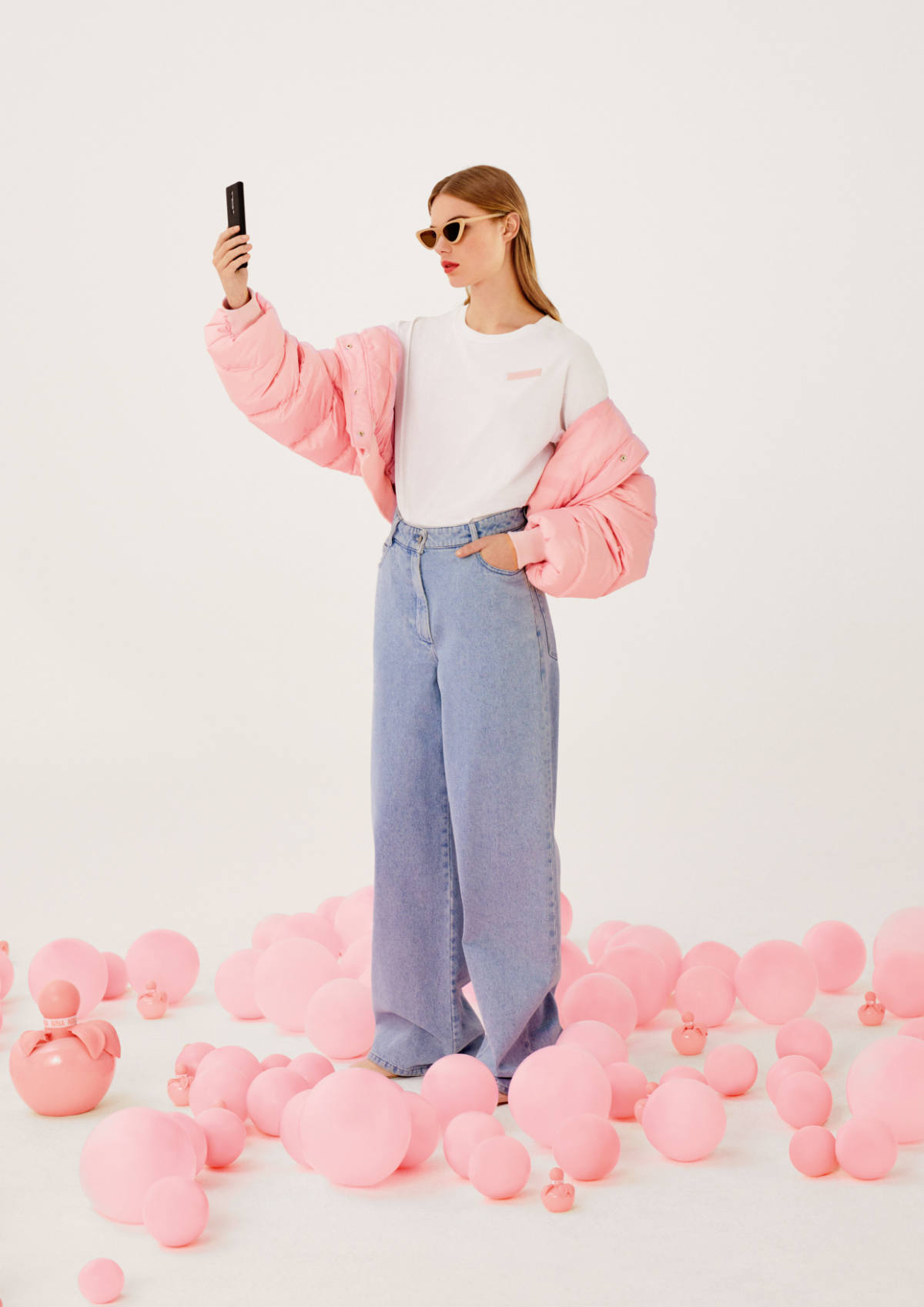 The apple every which way

In 2006, Nina Ricci created a surprise with Nina: mingling Calabria lemon, Caipirinha lime, gardenia, toffee apple, cedar and white musks. This creation by Olivier Cresp stood out from the usual perfumery codes. Nina is an invitation to dream and to romanticism. What is most daring about it? A gourmand facet that shook up codes with its apple-bottle which has since become a genuine emblem.

In 2019, the story continued with Nina Rouge. The bottle is dressed in the glossy lacquered red of a toffee apple, enclosing a juice pushing gourmandise to its zenith: raspberry and citron merge, gardenia quivers in unison with ginger blossom, while bourbon vanilla is clad with a crisp caramel. Nina Rouge bites into an apple then declares its toffee-like love for colour. 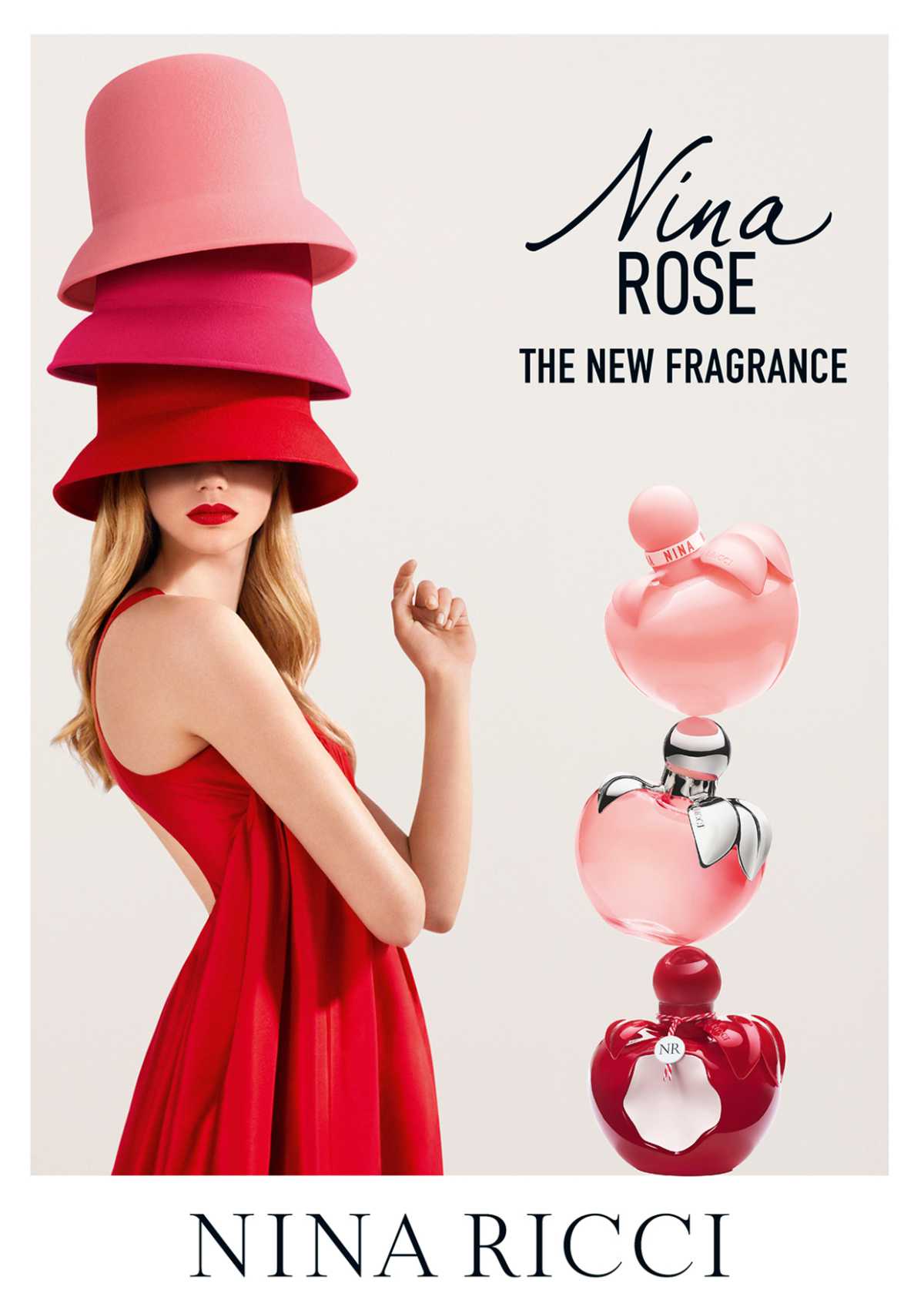