Hermès is delighted to announce the opening of its first store in Poland, in the dynamic cultural city of Warsaw on 28th November 2019. Settling on the edge of the historic city centre, Hermès will be taking up residence on the ground floor of the emblematic Europejski Hotel. The inauguration will mark a new chapter in the history of the Parisian house, affirming its presence in Central Europe. The new address will allow Polish customers and international visitors to discover the abundant variety of Hermès métiers and savoir-faire.

Following meticulous renovation, the building has been restored to its full splendour. Punctuated by columns, alcoves and mouldings, the listed structure of the ground floor of the Europejski hotel has been carefully preserved by Parisian architecture agency RDAI to welcome the new store.

Upon entering, visitors discover a central nave where they are greeted by a brushed-metal Hermès ex-libris, a horse and carriage and its groom, inlaid into the chequered marble floor. Display units and rails in cherrywood soften the 216m2 space’s precise lines, large rugs in gentle tones brighten up and energise bustling areas, and taut textiles in coloured metal mesh delicately filter the light. It is in this elegant setting that women’s silk, fragrances and fashion accessories are displayed, followed by the equestrian collections and leather goods, delimited by two tall wooden structures in straight lines. Men's ready-to-wear and silk occupy one end of a transept, watches and jewellery the other. Further on, a space dedicated to the women's universe offers a more intimate atmosphere. The ceiling and walls form an organic continuum that has been sculpted into curves and pierced with openings to serve as entrances, let in light, and offer a subtle interplay of shadows. It is a timeless boudoir, where visitors can delight in the women’s ready-to-wear and shoe collections. A joyous conversation between heritage and modernity inform this new architecture, giving voice to creation, know-how and French craftsmanship through the diversity of the collections and exceptional materials. 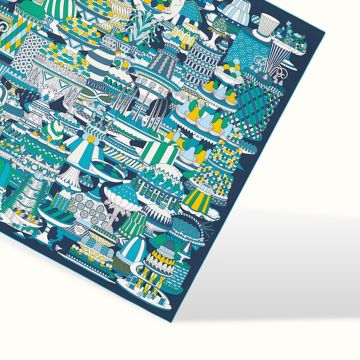 Since its creation, Hermès has maintained lasting ties with Poland, a nation with an established equestrian culture. With the opening of the Warsaw store, Hermès gives new energy to an enduring relationship and reinforces its attachment to Europe. This opening in a new home country expresses the house’s desire to surprise, to reward loyal Polish customers throughout the world, and to enchant new ones with the discovery of the house through beautiful materials and objects of quality.

Since 1837, Hermès has remained faithful to its artisan model and its humanist values. The freedom to create, the constant search for beautiful materials, the transmission of a savoir-faire of excellence, and the aesthetic of functionality all forge the singularity of Hermès, a house of objects. An independent, family owned company, Hermès is dedicated to keeping the essential element of production in France through its 42 workshops and to developing its network of 310 stores in 50 countries as of 31st December 2018. Axel Dumas, a sixth-generation family member, has been Hermès CEO since 2013. Founded in 2008, the Fondation d’entreprise Hermès supports projects in the areas of artistic creation, training and the transmission of savoir-faire, biodiversity, and the preservation of the environment.