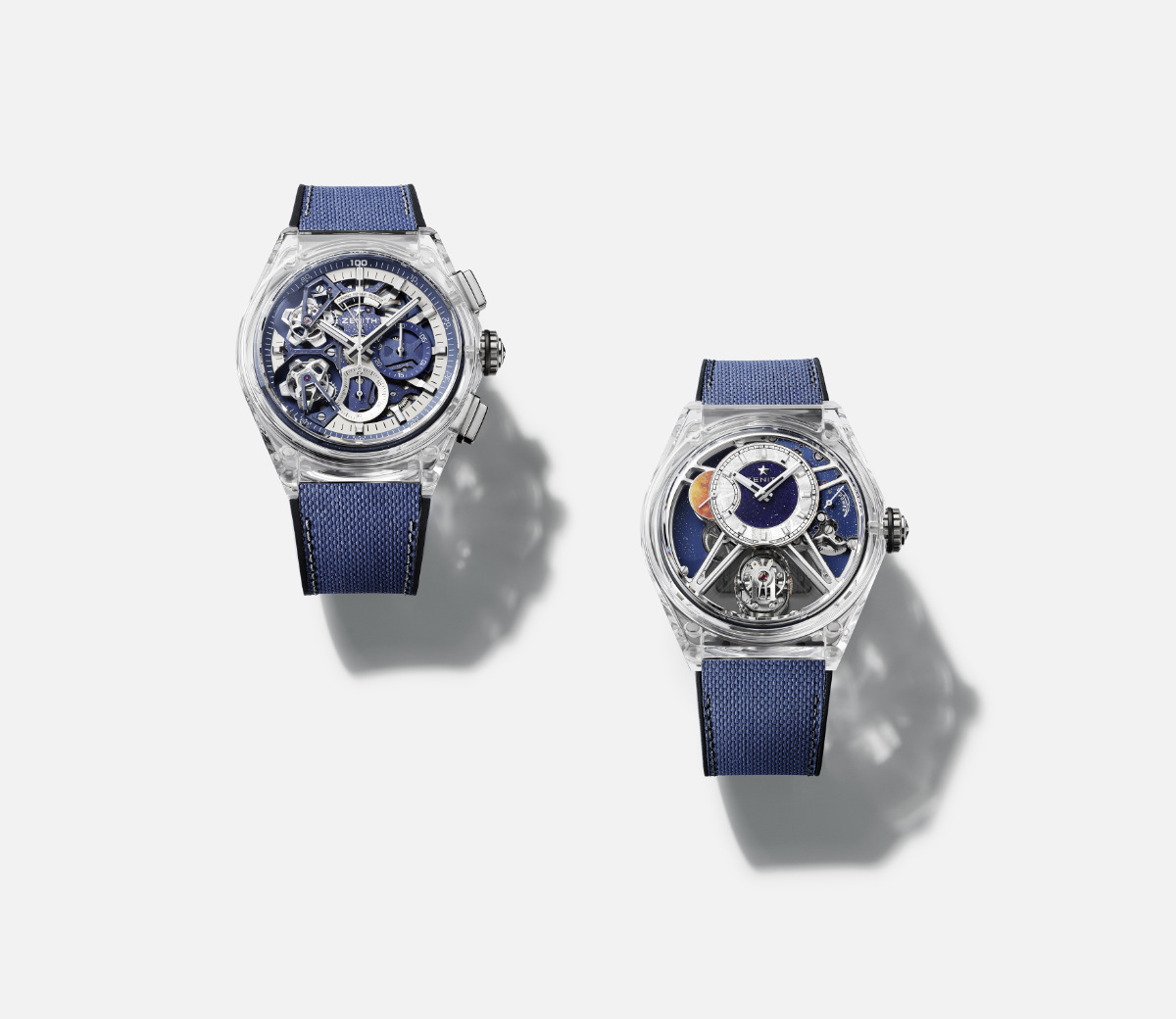 A new expression of haute horlogerie, the Zenith way. The Manufacture has reimagined two of its most extraordinary movements through contemporary architecture and finishing techniques that can be admired through luminous and transparent sapphire cases. Just like Georges-Favre Jacot who named his Manufacture after the highest point in the sky reached by a heavenly body in the sky, Zenith’s watchmakers and designers sought inspiration from the endless universe beyond our horizon for its grandest and most ingenious haute horlogerie creations.

Zenith has reinterpreted two of its most cutting-edge haute horlogerie calibres in a way that could only be admired through the transparency of a sapphire case. These two creations place Zenith’s uniquely futuristic and evocative aesthetic centre-stage, using novel and previously unheard-of decoration methods for a stellar result.

First, all the movement’s components are treated with blue PVD. The inscriptions as well as decorative elements like miniature stars are then carefully engraved onto the bridges, after which the chamfered edges of the bridges are precisely finished with a rhodium-coloured PVD; a specially developed technique that provides a striking contrast and adds even more visual depth to an already intricately layered movement with its futuristic form. Framed by totally transparent sapphire cases, the movements shine in a light of their own – and from all angles.

Overcoming the effects of gravity on chronometric precision has long been watchmakers’ ultimate goal. Zenith accomplished precisely this with its Gravity Control mechanism, where the regulating organ is fixed to a gimbal that always remains in a flat position regardless of how the watch is rotated. Today, the Manufacture has completely redesigned the entire movement with a new architecture to enable a more open and exhibitive display, encapsulated in a transparent sapphire case that allows the singular mechanism to be admired from all angles: a first for the Manufacture. 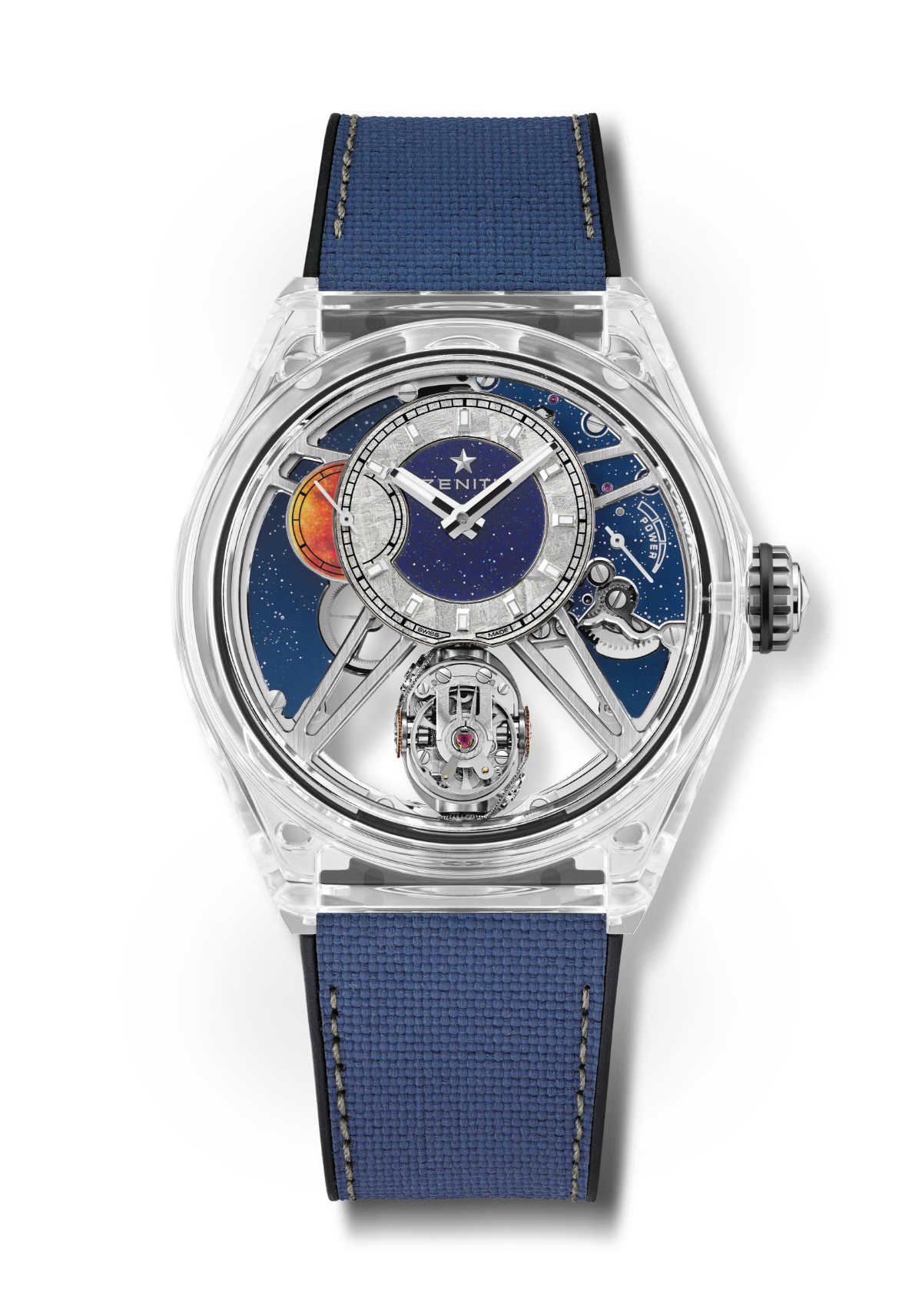 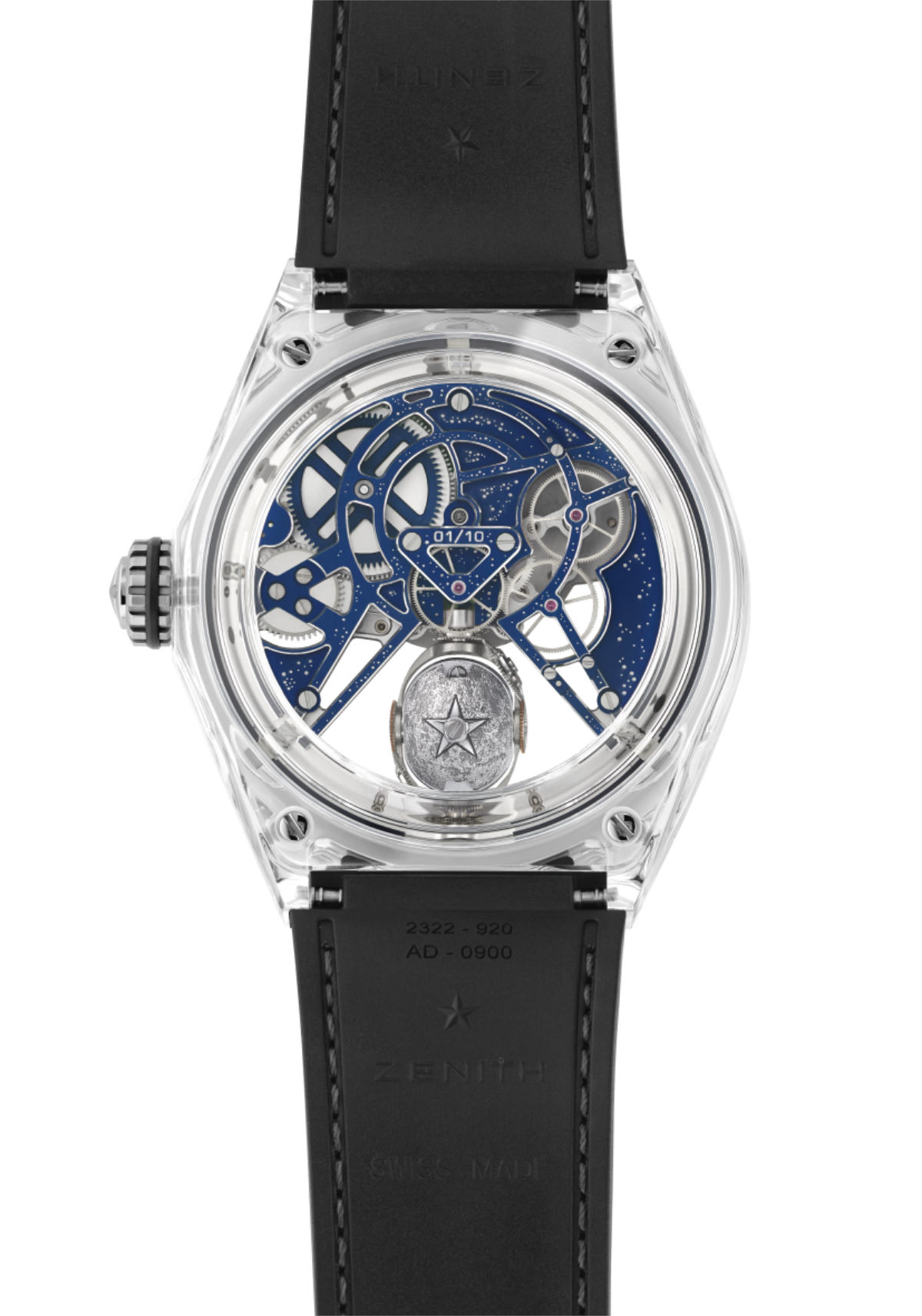 Like an object suspended in space and free from the effects of gravity, the off-centred dial of the DEFY Zero-G Sapphire combines several traditional crafts in a contemporary execution, handcrafted in a mosaic of meteorite, aventurine glass and grand feu enamel on a gold base. It depicts our neighbouring red planet Mars on the small seconds, partially eclipsed by the hour and minute dial. A special touch that can only be seen when the watch is overhead is the back of the gyroscopic module, fashioned with a cratered texture mimicking the moon. The entire main plate and bridges of the movement are finished in a blue tone with contrasting grey rhodium chamfers, speckled with white stars of varying sizes. This astronomically inspired finish extends to the movement’s cylindrical container, which can also be viewed through the sides of the case.

For the latest execution of the fastest tourbillon chronograph around - equipped with two independent tourbillons completing rotations in 60 seconds for the time-keeping tourbillon and 5 seconds for the chronograph’s tourbillon – Zenith took its evocative “starry sky” aesthetic to new cosmic heights in the DEFY 21 Double Tourbillon Sapphire, with a nod to the universe and space exploration. 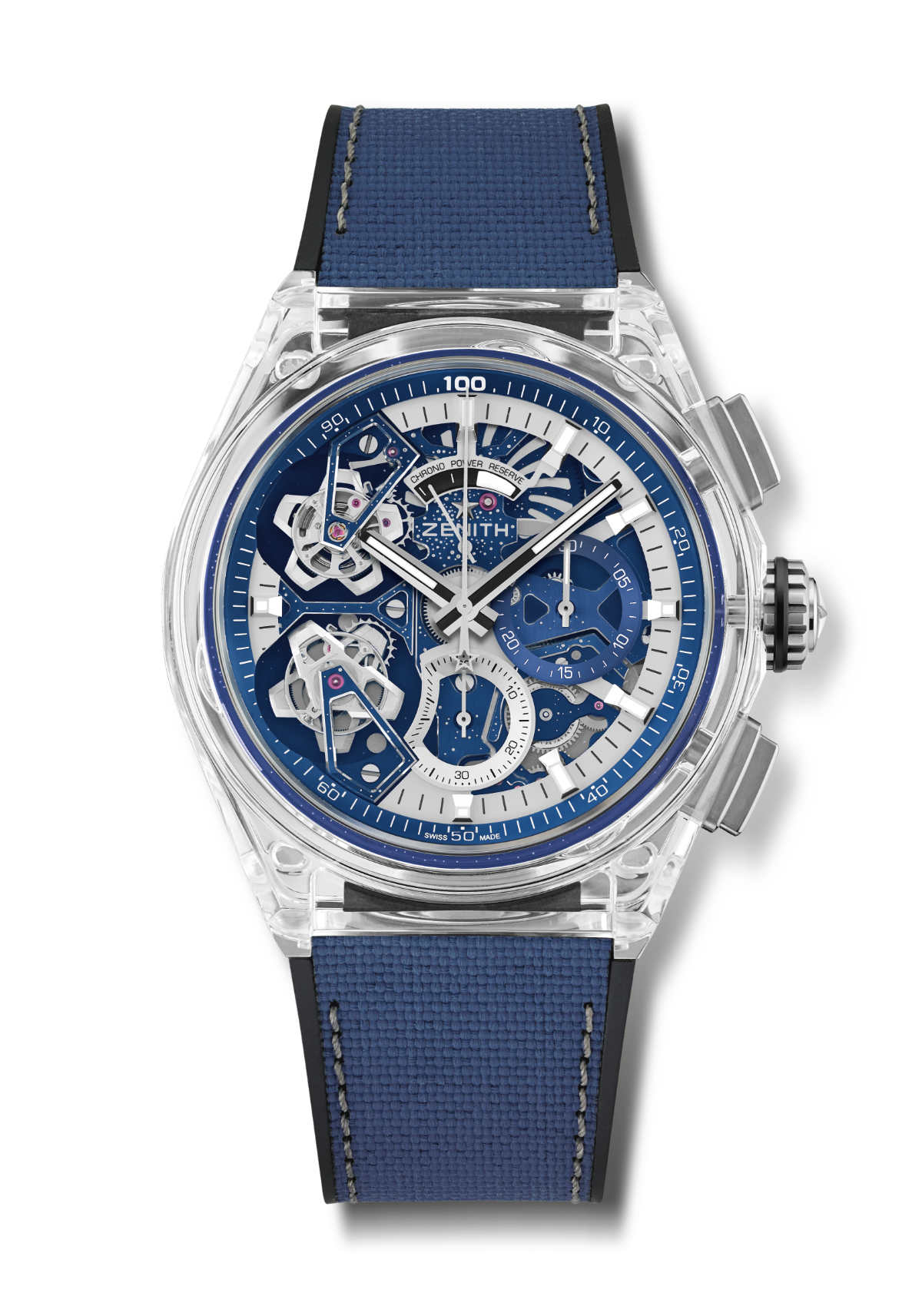 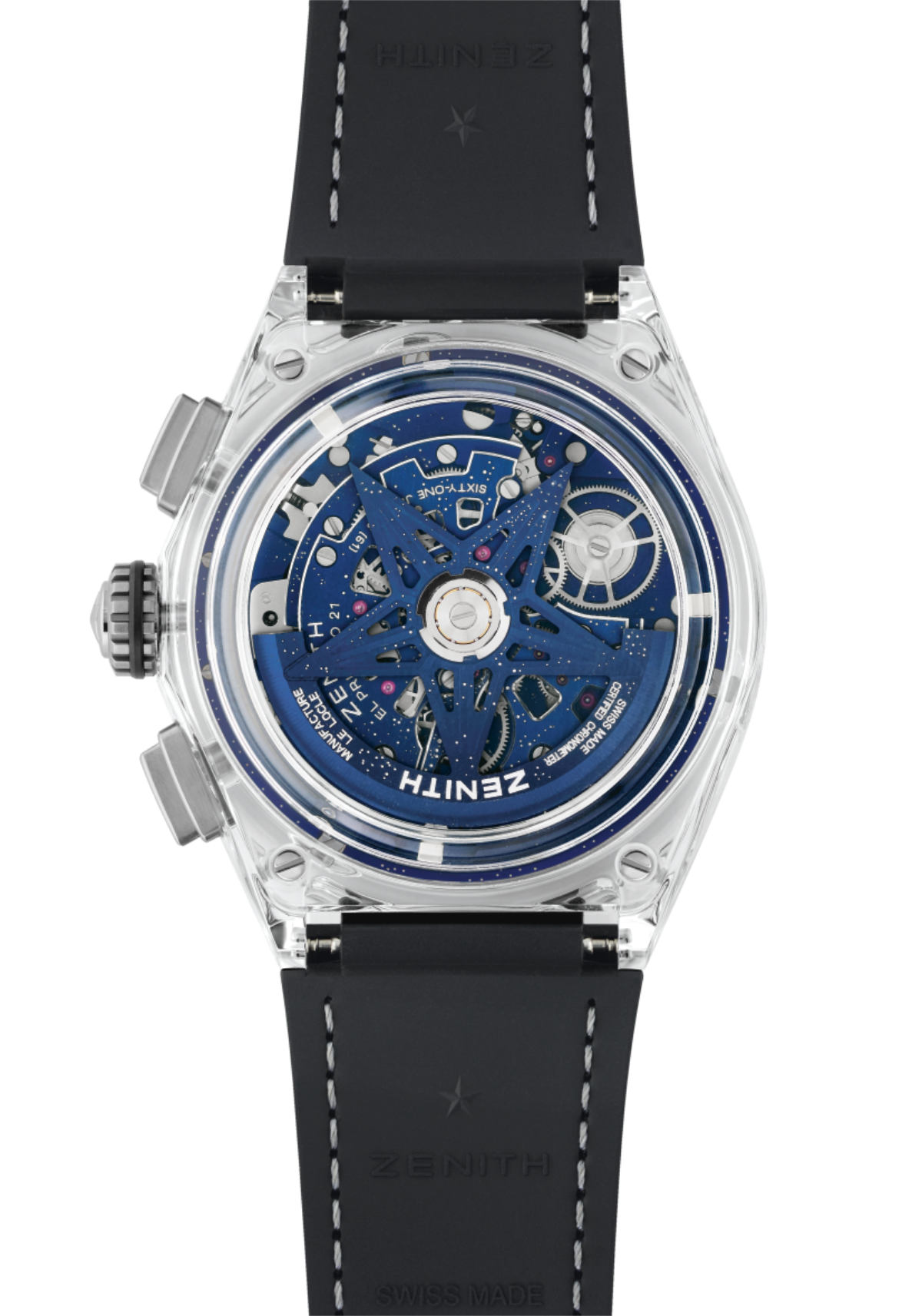 Visible for all to admire through the crystalline case, the DEFY 21 Double Tourbillon’s exceptional chronograph movement is rendered in a stellar and futuristic aesthetic. The main plate of the movement is finished in a striking blue PVD tone, and in a first for Zenith, some of the dial-side bridges are engraved with stars, like a distant galaxy of micro-mechanics in perpetual motion. Truly at the summit of precision, the 1/00th of a second chronograph moves at incredible speed, juxtaposed against a still, starry backdrop.

The DEFY 21 Double Tourbillon Sapphire and DEFY Zero-G Sapphire will be produced as a limited edition of 10 pieces each.

For the 20 owners of the DEFY Zero-G Sapphire and DEFY 21 Double Tourbillon Sapphire limited editions, Zenith is offering the opportunity to live an unforgettable experience: a parabolic zero-gravity flight. Scheduled to take place in February 2022, Zenith has partnered with Novespace, a subsidiary of the French National Space Center, to offer the experience of weightlessness.

Guests will arrive at the Novespace facility in Bordeaux, France, where they will meet with their instructors. French astronaut Jean-François Clervoy will also be present at the pre-flight conference. The flight itself will consist of 15 parabolas, where the airplane ascends than plunges in a freefall to reproduces the effect of floating in weightlessness in a perceived absence of gravity. 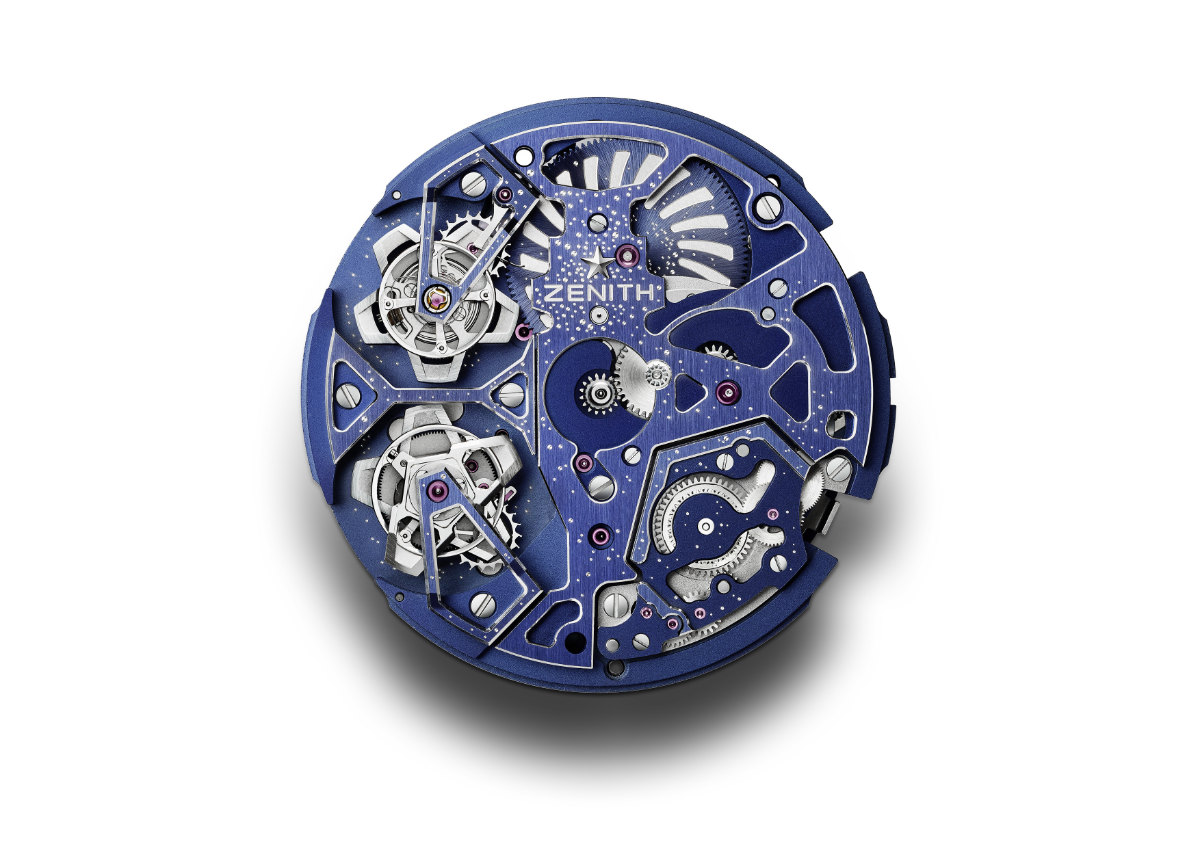 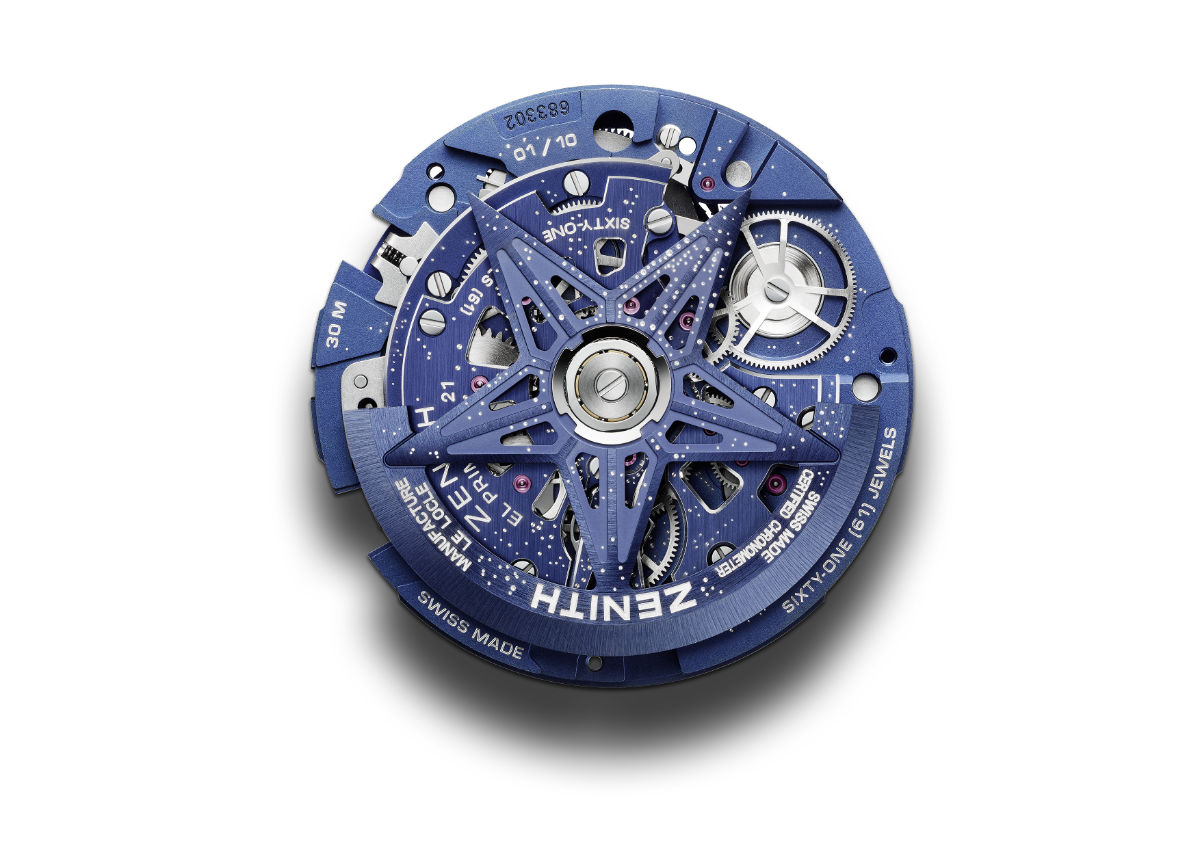 - Domed sapphire crystal with anti-reflective treatment on both sides 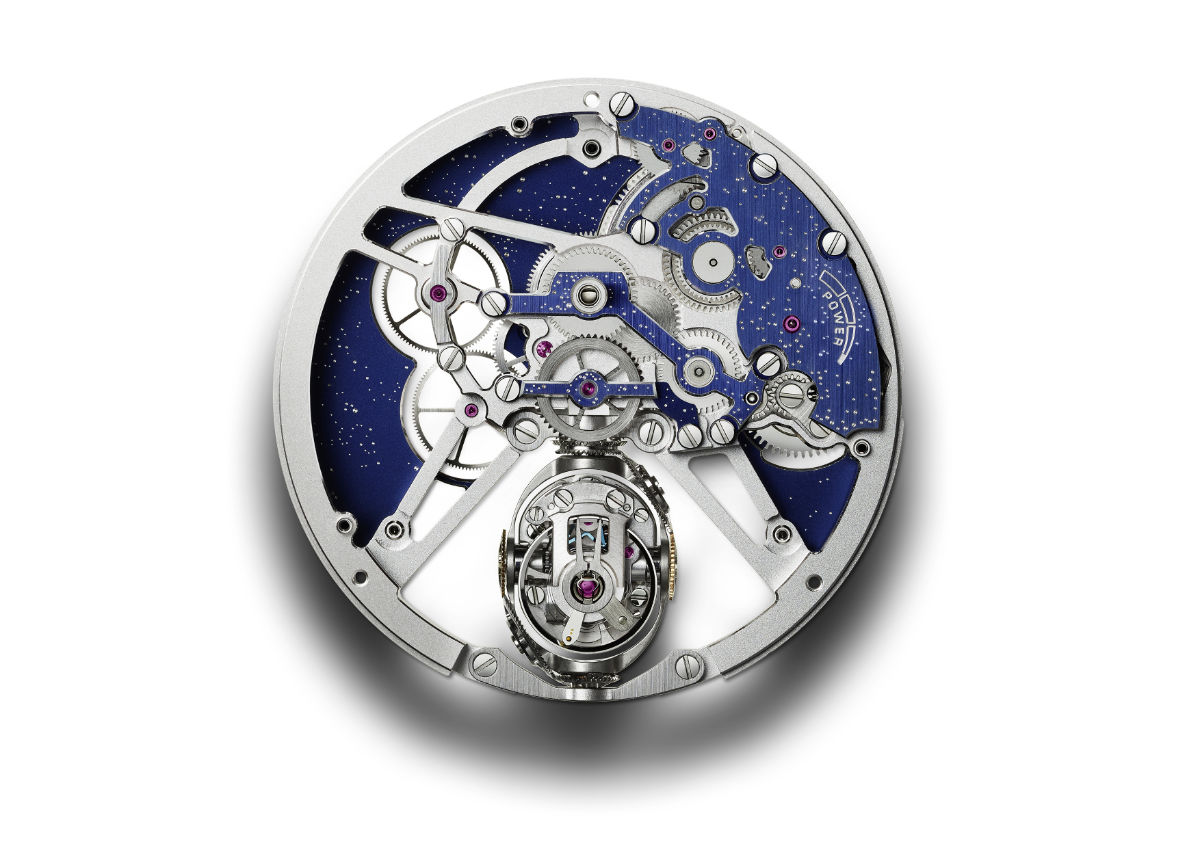 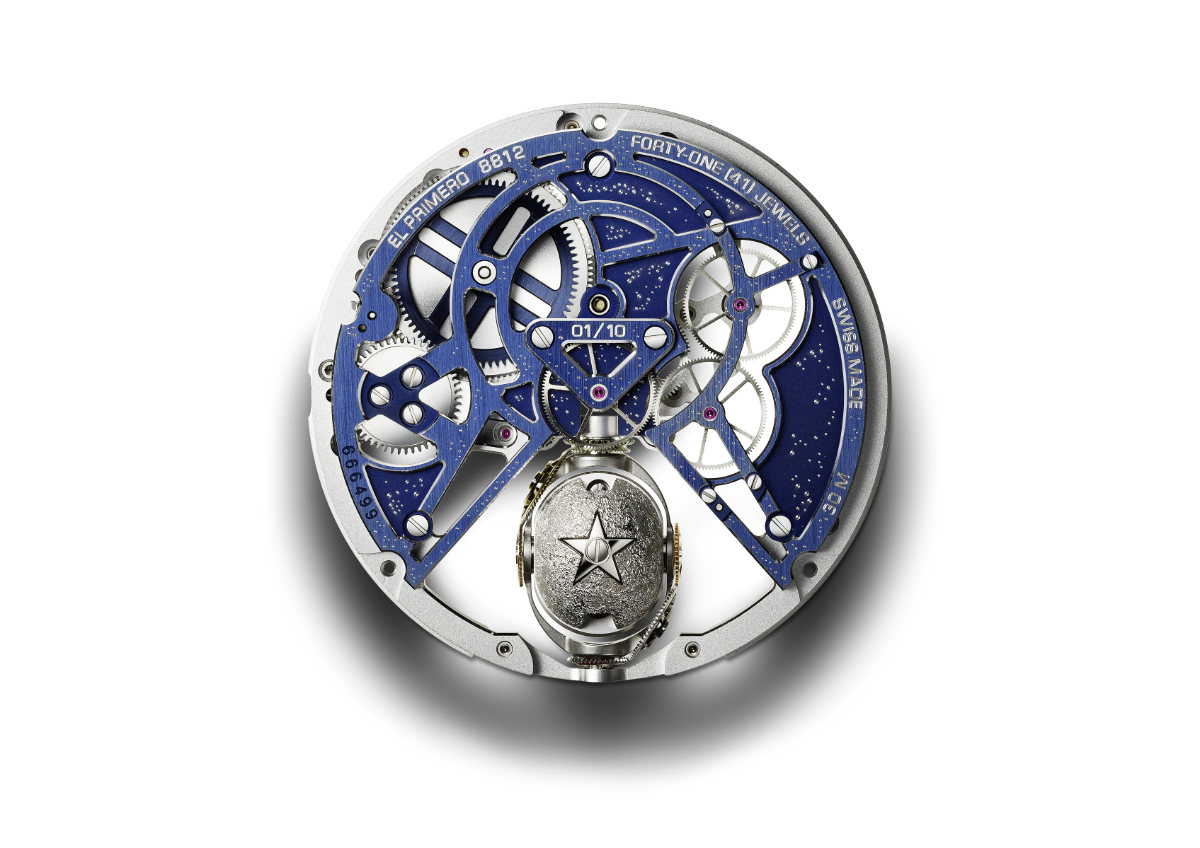 - Hours and minutes excentred at 12 o'clock. Small seconds at 9 o'clock

Zenith exists to inspire individuals to pursue their dreams and make them come true – against all odds. Since its establishment in 1865, Zenith became the first watch manufacture in the modern sense of the term, and its watches have accompanied extraordinary figures that dreamt big and strived to achieve the impossible – from Louis Blériot’s history-making flight across the English Channel to Felix Baumgartner’s record-setting stratospheric free-fall jump. Zenith is also highlighting visionary and trailblazing women – past and present – by celebrating their accomplishments and creating the DREAMHERS platform where women share their experiences and inspire others to fulfill their dreams.

Zenith exclusively uses its own in-house developed and manufactured movements across all of its watches. Since the creation of the El Primero in 1969, the world’s first automatic chronograph calibre, Zenith has gone on to master the complication with even more precision, capable of measurements to the closest 1/10th of a second in the most recent Chronomaster lines, and 1/100th of a second in the DEFY collection. Zenith has been shaping the future of Swiss watchmaking since 1865, accompanying those who dare to challenge themselves and break barriers. The time to reach your star is now.