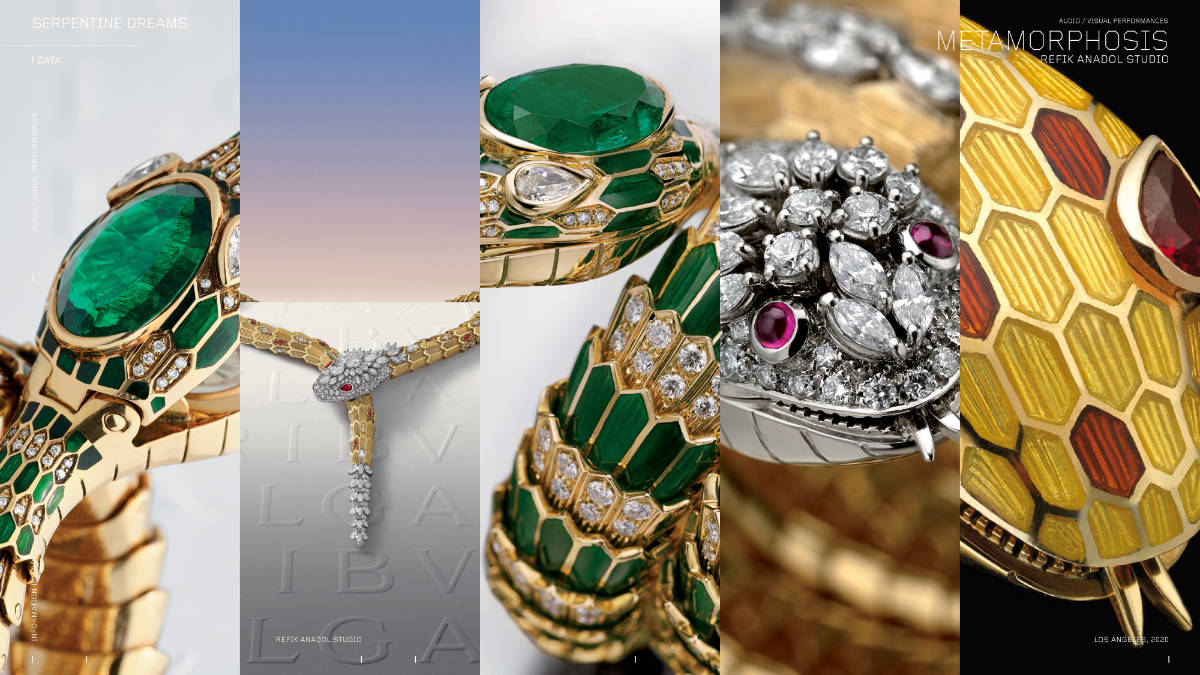 Bulgari embarks on a new chapter with award-winning media artist and director Refik Anadol. After last year's success with their exhibition and digital experience in Piazza del Duomo in Milan, it is London's chance to celebrate the second chapter of Serpenti Metamorphosis.

From November 25th to December 23rd, Bulgari will present an immersive experience with Refik Anadol's artwork representing its most famous icon, Serpenti, within the world­ renowned Saatchi Gallery in Chelsea, London, for the first time ever. It will be the moment to kick off a momentous milestone, the 75th anniversary of Serpenti, to be celebrated in 2023. 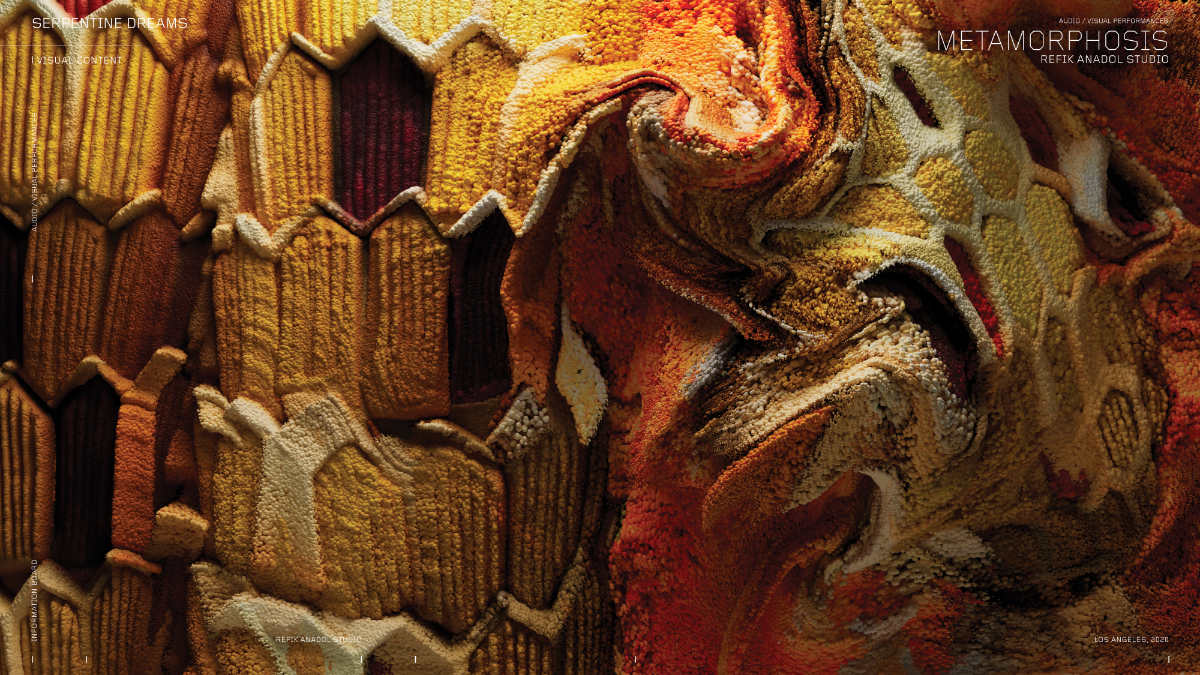 Serpenti is Bulgari's most emblematic icon. It first appeared in 1948 under the form of stylish bracelet-watches crafted with the famous tubogas technique that became an instant success. Seducing and adorning the most quintessential actresses in the 50s and 60s, such as Elizabeth Taylor, it quickly became one of Bulgari's most desirable and recognisable signs, which over the years has been able to renew and evolve itself in an unstoppable and fascinating metamorphosis that continues to the present day. 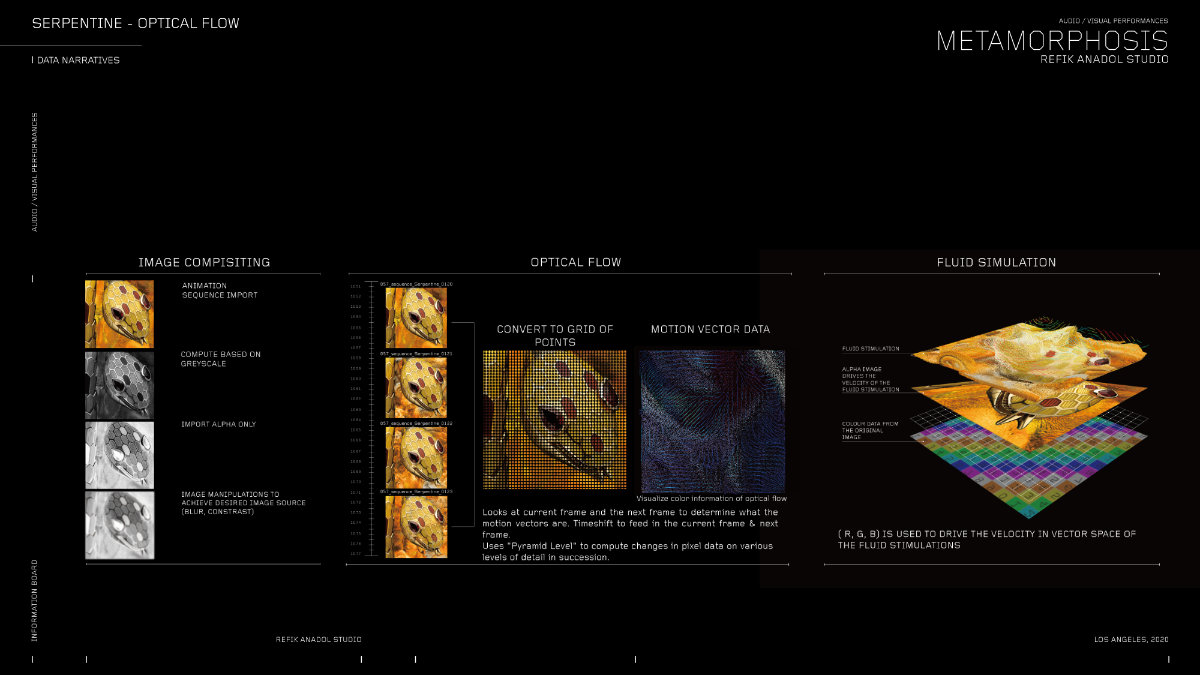 Bulgari and Refik Anadol will bring visitors through an immersive journey. The unique Al developed by the artist and director will take explorers through the infinite intricacies of an ever-changing snake, showcasing its continuous rebirth and evolution all while being tantalised by complimentary sound and smell synonymous with Bulgari's finest fragrances. 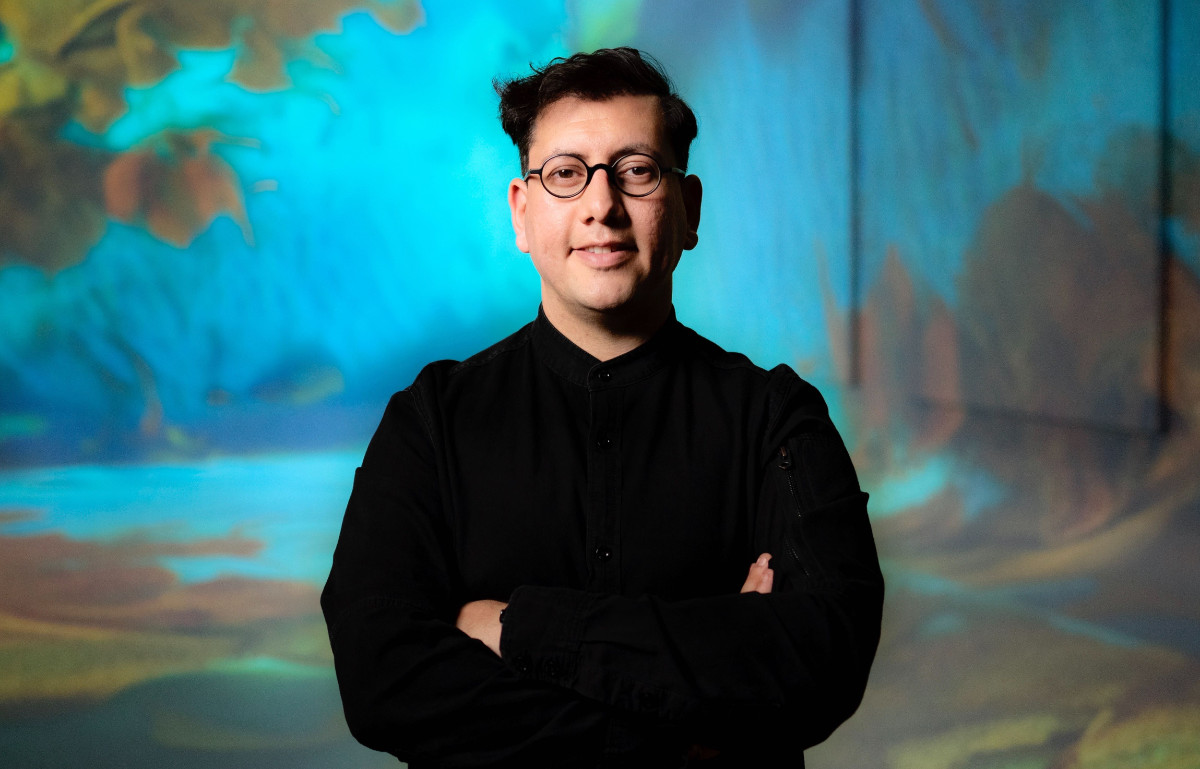 Machine learning algorithms trained on more than 200 million images of nature result in a mesmerizing visualisation of an alternative reality of nature that mimics its textures, recalling the snake evolution, a new take on the meaning of Metamorphosis.

As evocative premise to Refik Anadol's experience, the setup is enriched with Bulgari Serpenti archival images and sketches in dialogue with the creations on display that will fittingly illustrate the unceasing evolution of the icon and its deep connection with the women's universe. 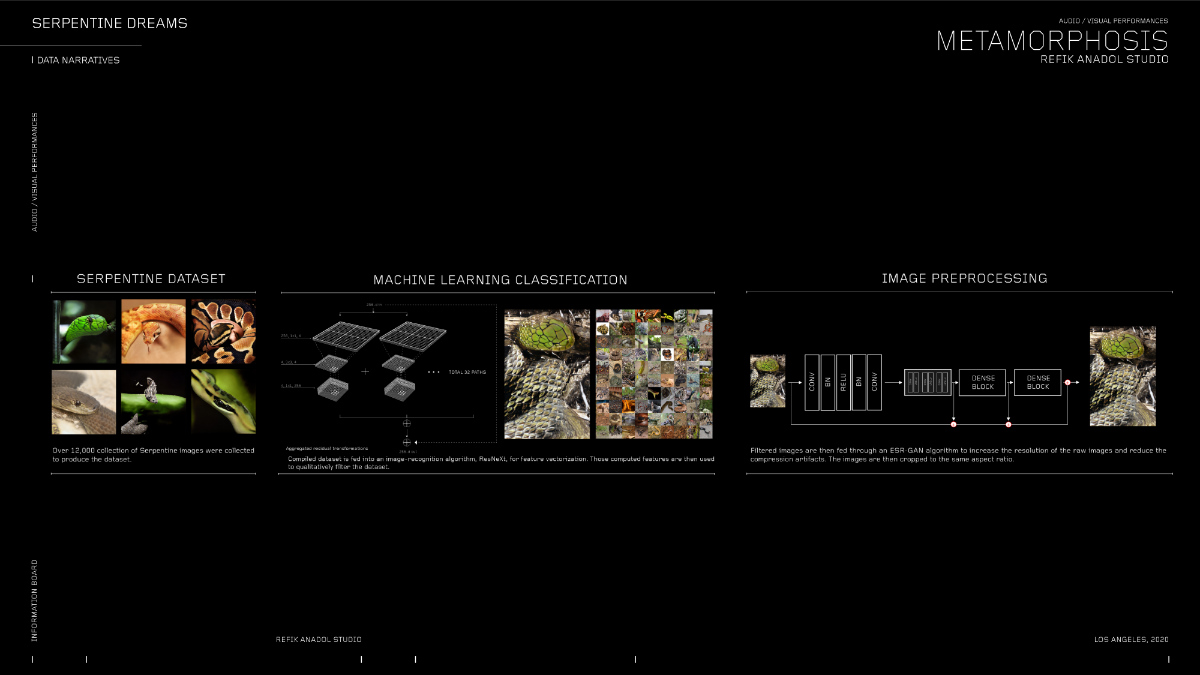 It will be brought to the tangible world by an exclusive selection of Serpenti pieces complimenting the exhibition, from heritage jewellery and horology pieces dating back from the 1940's, right up to the present day with the latest high jewellery creations of the Roman jeweller. 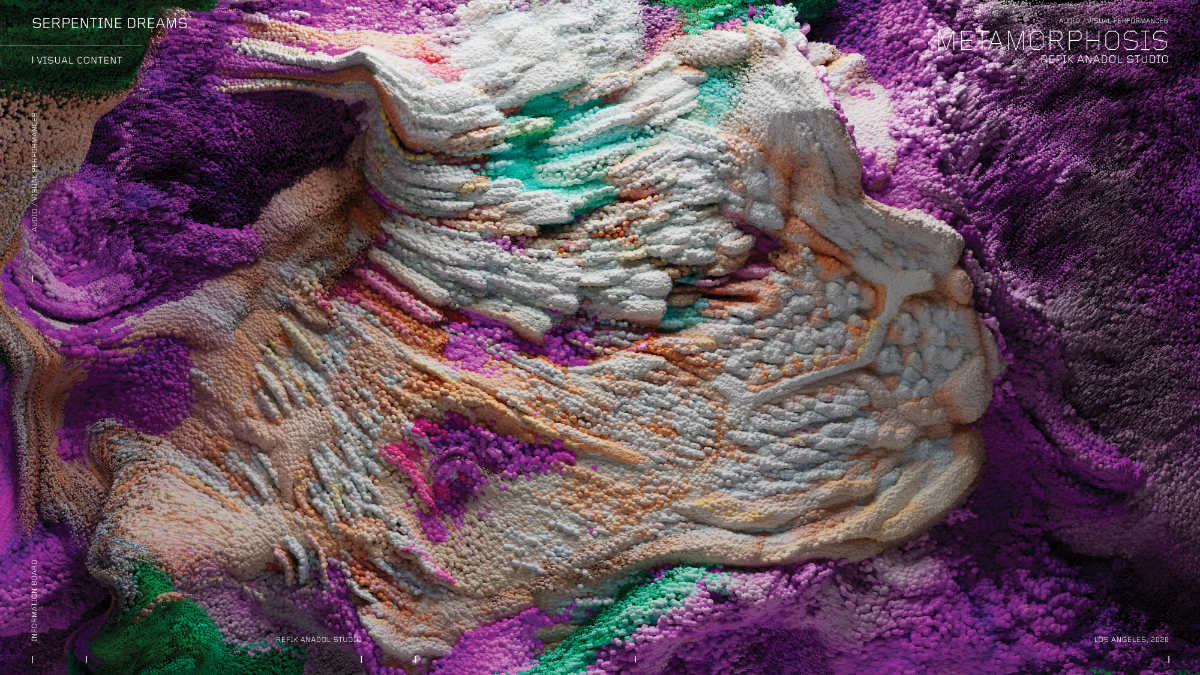 From the most stylised models of the beginning, to the animal variants with polychrome enamels and precious eyes, until the cool, graphic charm of Viper; Serpenti will tell the story of a multi-faceted sign that has always been able to be in sync with fashion and social trends of female emancipation. 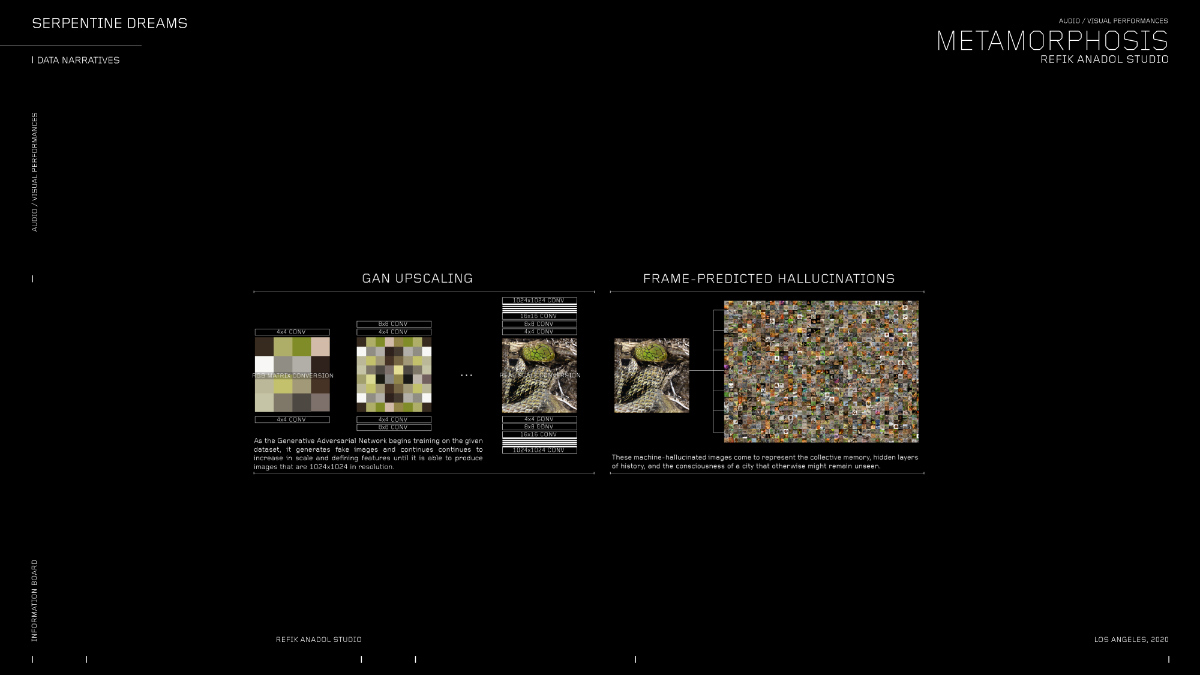 The exhibition will take place at Saatchi Gallery, London from November 25th until December 23rd in Gallery 3, with free entry available to book on Bulgari.com.

Part of the LVMH Group, Bulgari was founded in Rome in 1884 as a jewellery shop. Known as the magnificent Roman jeweller and master of coloured gems, Bulgari has established a worldwide reputation for Italian excellence and enjoys renowned for its exquisite craftsmanship. The company's international success has evolved into a global and diversified luxury purveyor of products and services, ranging from fine jewels and high end watches to accessories and perfumes, and featuring an unrivalled network of boutiques and hotels in the world's most exclusive shopping areas. Demonstrated through its numerous philanthropic partnerships, Bulgari deeply believes in innovating the present for a sustainable future through its commitment to Corporate Social Responsibility and giving back - to nature and to the community. 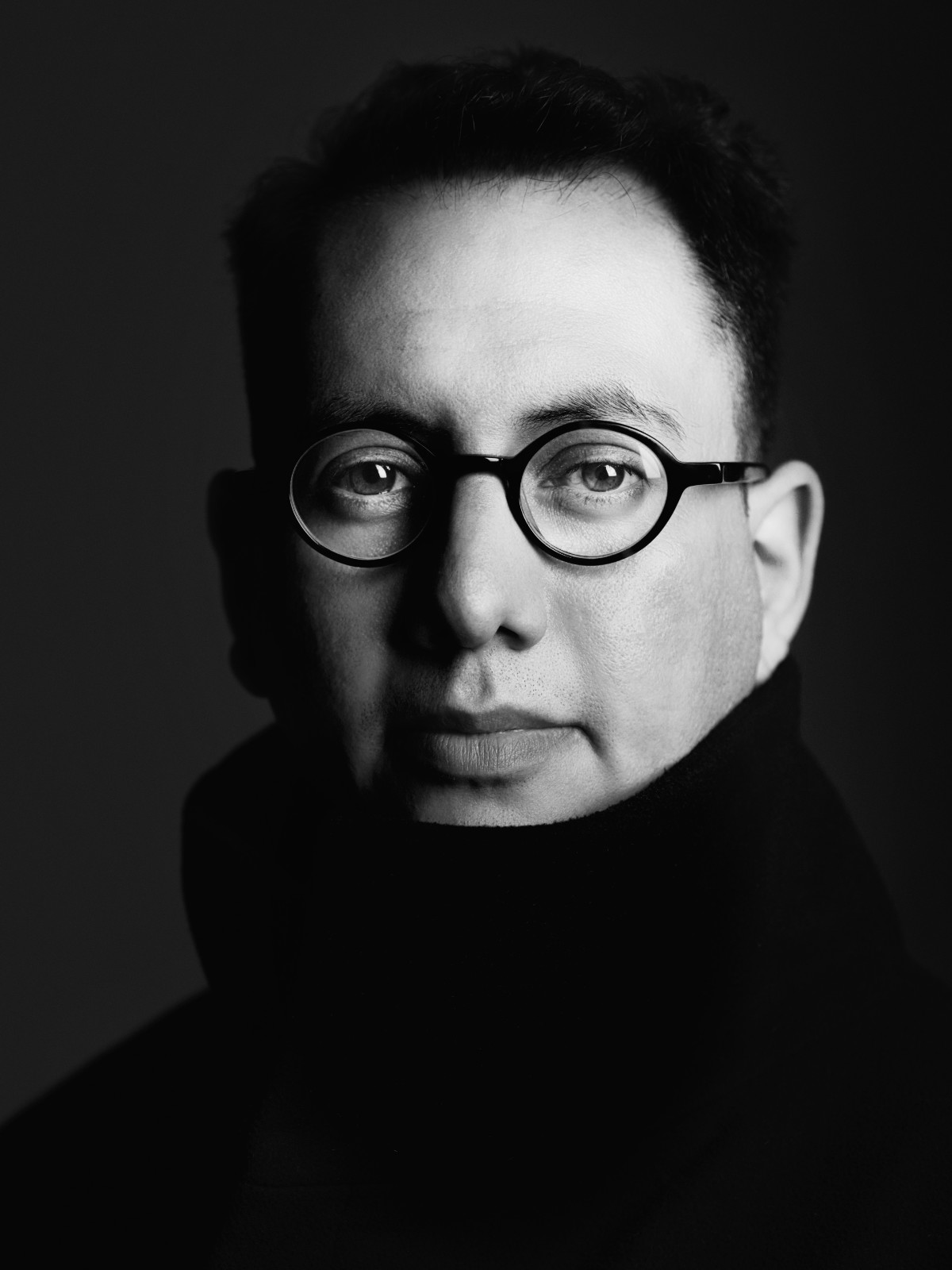 Refik Anadol (b. 1985, Istanbul, Turkey) is a media artist, director and pioneer in the aesthetics of data and machine intelligence. His body of work locates creativity at the intersection of humans and machines. In taking the data that flows around us as the primary material and the neural network of a computerized mind as a collaborator, Anadol paints with a thinking brush, offering us radical visualizations of our digitized memories and expanding the possibilities of architecture, narrative, and the body in motion. Anadol's site-specific Al data sculptures and paintings, live audio/visual performances, and immersive installations take many forms, while encouraging us to rethink our engagement with the physical world, its temporal and spatial dimensions, and the creative potential of machines.

Since 1985, Saatchi Gallery has provided an innovative platform for contemporary art. Exhibitions have presented works by largely unseen young artists, or by international artists whose work has been rarely or never exhibited in the UK. This approach has made the Gallery one of the most recognised names in contemporary art. Since moving to its current 70,000 square feet space in the Duke of York's Headquarters in Chelsea, London, the Gallery has welcomed over 10 million visitors. The Gallery hosts over 5,000 schools visits annually and has over 6 million followers on social media. In 2019 Saatchi Gallery became a charity, beginning a new chapter in its history.