Mens sana in corpore sano: a healthy mind in a healthy body. For Francis Kurkdjian, this quote describes in a few words the benefits attributed to the eau de Cologne which could also be ingested until the mid-19th century. Thus, it had a double effect: it smelled good while making you feel good.

A staunch defender of the heritage of perfumery, Francis Kurkdjian is first and foremost a free-spirited creative mind and a pioneer in many ways. Through his creations, he conveys his contemporary vision of the perfumer’s profession and its interpretation in utterly modern fragrances. Thus, since the creation of the Maison in 2009 with Marc Chaya, co-founder and CEO, he revived the spirit of the eau de Cologne and reinterpreted it in his own way with Aqua Universalis, a fresh eau for everyone and everything. Since then, the tradition lives on and has been enriched with two additional olfactory silhouettes, Aqua Vitae and Aqua Celestia. 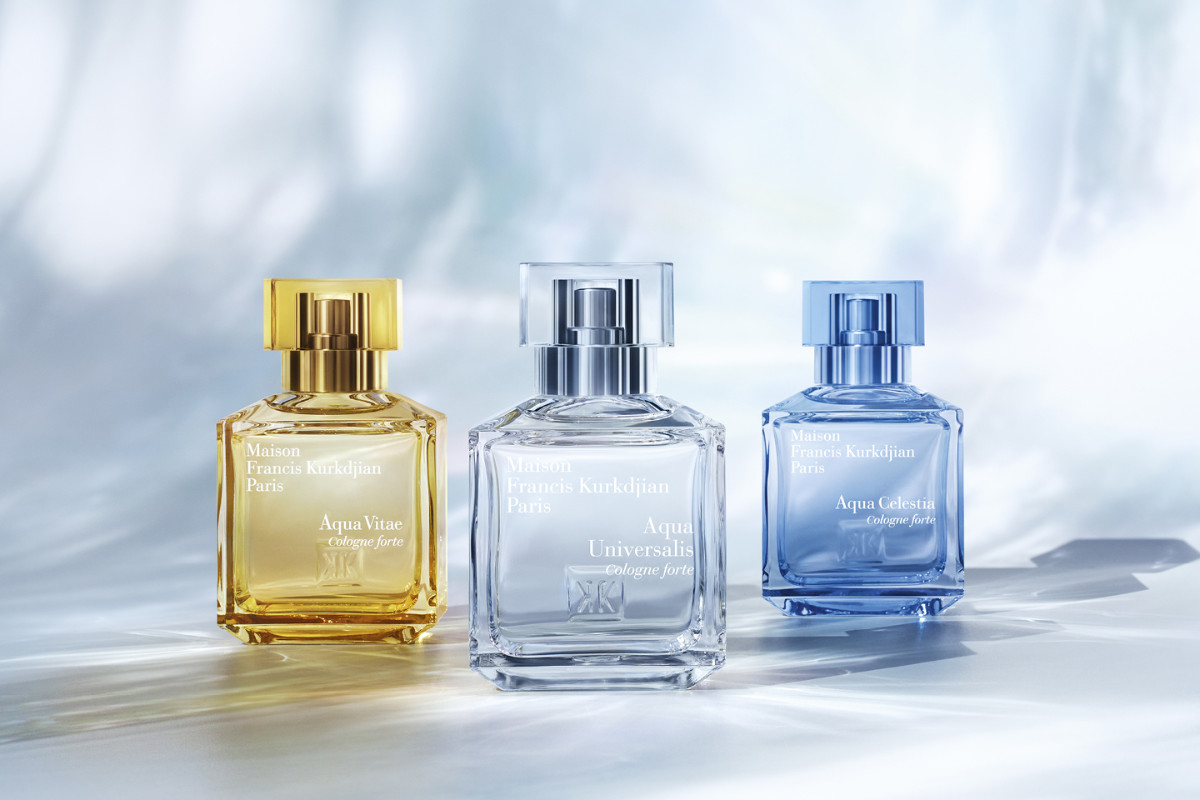 Today, Francis Kurkdjian continues the saga, by unveiling three new versions of his Aqua fragrances within the Cologne forte collection. Three windows open on landscapes beckoning to evasion, three invitations to travel towards a destination steeped in light, colors and, of course, freshness. Mostly provided by the bergamot - the fundamental ingredient of the traditional eau de Cologne - which different ingredients and accords modulate without distorting the original inspiration, freshness plays the leading role in these new creations of the Maison’s olfactory wardrobe.

“Freshness is to perfume what water is to life on earth: essential,” Francis Kurkdjian.

Francis Kurkdjian believes that the main idea behind the Cologne forte fragrances is to convey freshness through the sensations induced by light. Aqua Universalis Cologne forte is the notion of whiteness pushed to the extreme, a pure breath of fresh air, the feeling, not the smell, of cleanliness. Aqua Vitae Cologne forte symbolizes the sun at its peak with a floral blaze crossed by a surge of hot air. Aqua Celestia Cologne forte is the encounter between the blue hues of the sea and the sky, a horizon beckoning you to evasion.

“The Cologne forte collection is a palette of emotions induced by light,” Francis Kurkdjian.

Cologne: Eau de Cologne (French: [o d(ə) kɔlɔɲ]; German: Kölnisch Wasser [ˈkœlnɪʃ ˈvasɐ]; which means “ the Eau de Cologne"). Until the mid-19th century, the eau de Cologne perfumes could be ingested because they were composed of natural ingredients. Originally created in Italy by Jean Marie Farina, this composition eventually became a generic name to describe an olfactory type. Eau de Cologne now defines a low-concentration (2-5%) fragrance or an olfactory family built on the combination of citrus fruit essences and floral and aromatic notes.

Forte: in Western music, dynamics are a sign marked on a music sheet defining the relative intensity of a note, a phrase, or even a full passage in a musical composition. Dynamics allow musicians to render the variation in loudness of the composition during its interpretation.

Why did you create the “Cologne forte” collection?

To understand the genesis of this Cologne forte collection, you need to go back to the creation of Aqua Universalis, launched when Maison Francis Kurkdjian was created in 2009.
The inspiration for this fragrance, later followed by Aqua Vitae and Aqua Celestia, could be summarized with this Latin quote “mens sana in corpore sano”, meaning “a healthy body in a healthy mind”. I thus wished to reconnect with the tradition of the Eau de Cologne which, in its original form, was also drinkable, creating a visible “inside-outside” effect. What is good for my body is also good for my mind.

In 2011 we came up with the forte name, a reference to music, to express the idea of a powerful intensity in these fresh fragrances.
Finally, in 2021, I wanted to bring a new light to this Aqua collection and a new caliber to the forte range, keeping in mind that the idea of freshness could also be explored starting from the sensations induced by light. This is how Cologne forte became a reality: a modern, long-lasting Cologne, showcasing the idea of light, color and sensations which was already in the genesis of the original eau de toilette fragrances.

What makes these fragrances different from the other Aqua perfumes?

The heart of the history and inspiration of these eau de parfum fragrances is still identical to that of the eau de toilette fragrances. It is not only a matter of intensity but also a reharmonization of the formula, with Aqua Universalis, a step back of over 10 years. Imagine a musical composition played on the piano, then imagine the same composition played by a symphony orchestra. The melody stays the same but you feel the composition more intensely, it becomes more emotional because it fills up more space. The same principle applies to these fragrances whose concentration has been increased so as to find the right balance between freshness and a long-lasting trail. I think the result is more refined and asserts the olfactory signature of each inspiration.

Are these fragrances masculine, feminine or gender-neutral?

All the Aqua collection fragrances are gender-neutral, as the Eau de Cologne has always been.

Could you assign an adjective to each of these Aqua Cologne forte fragrances? 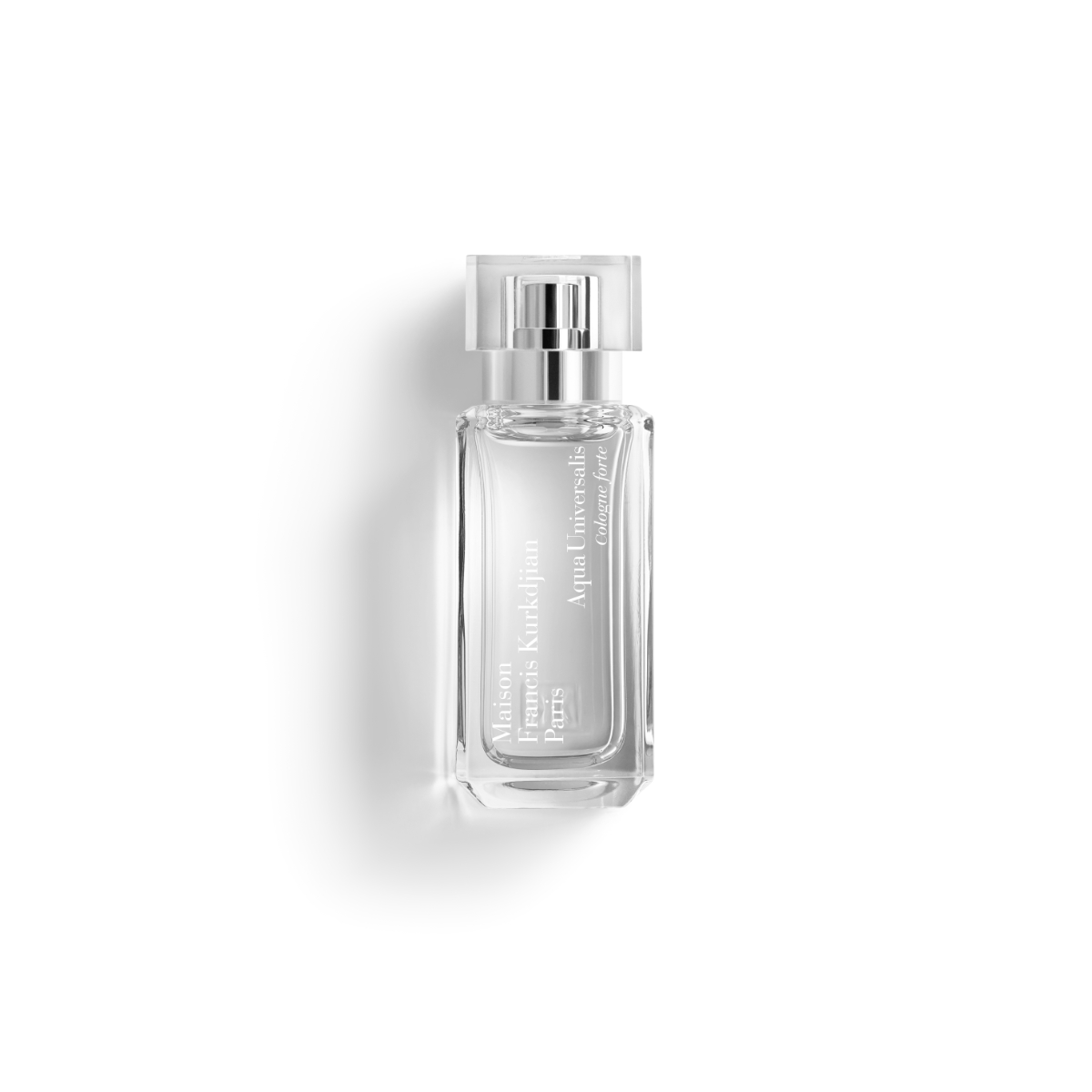 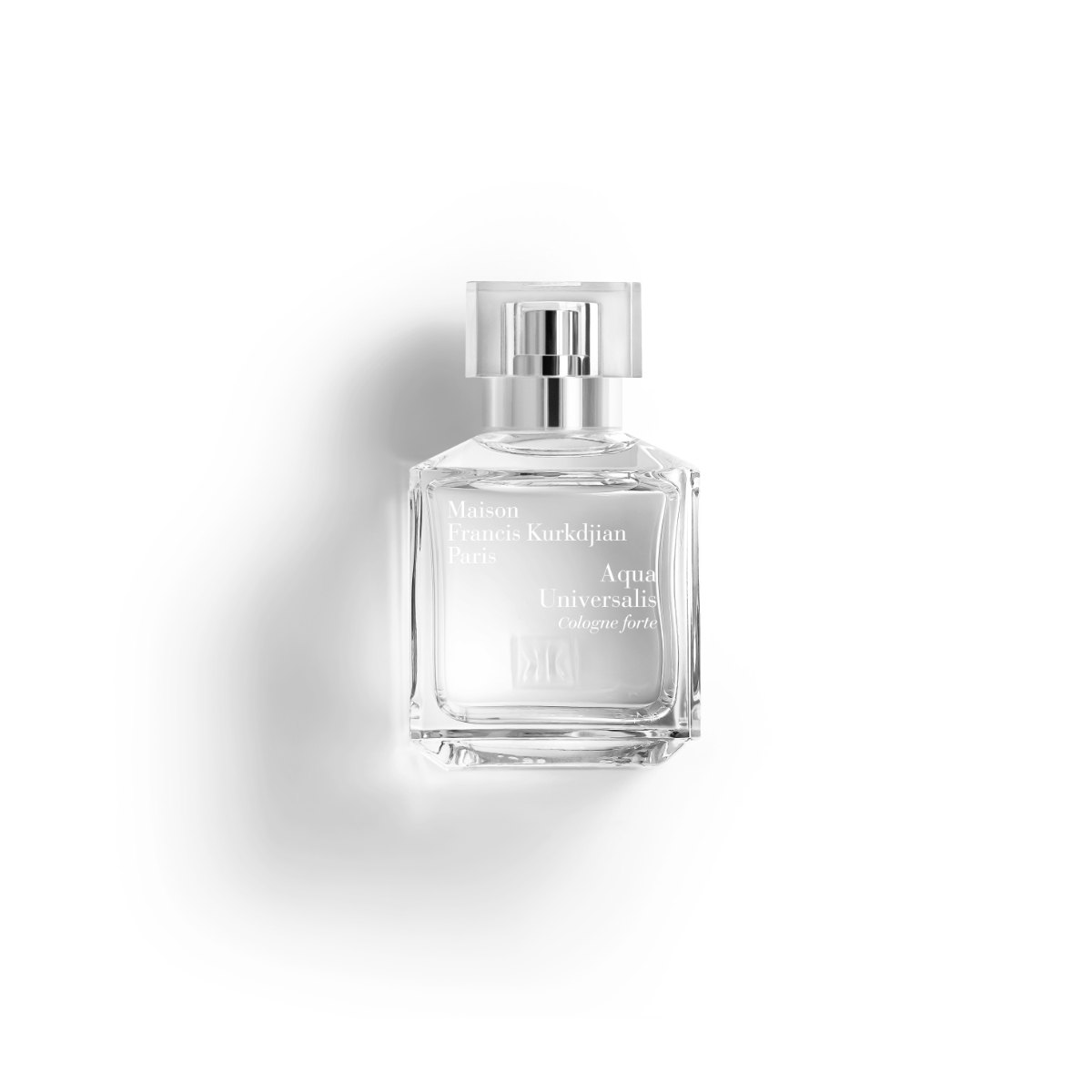 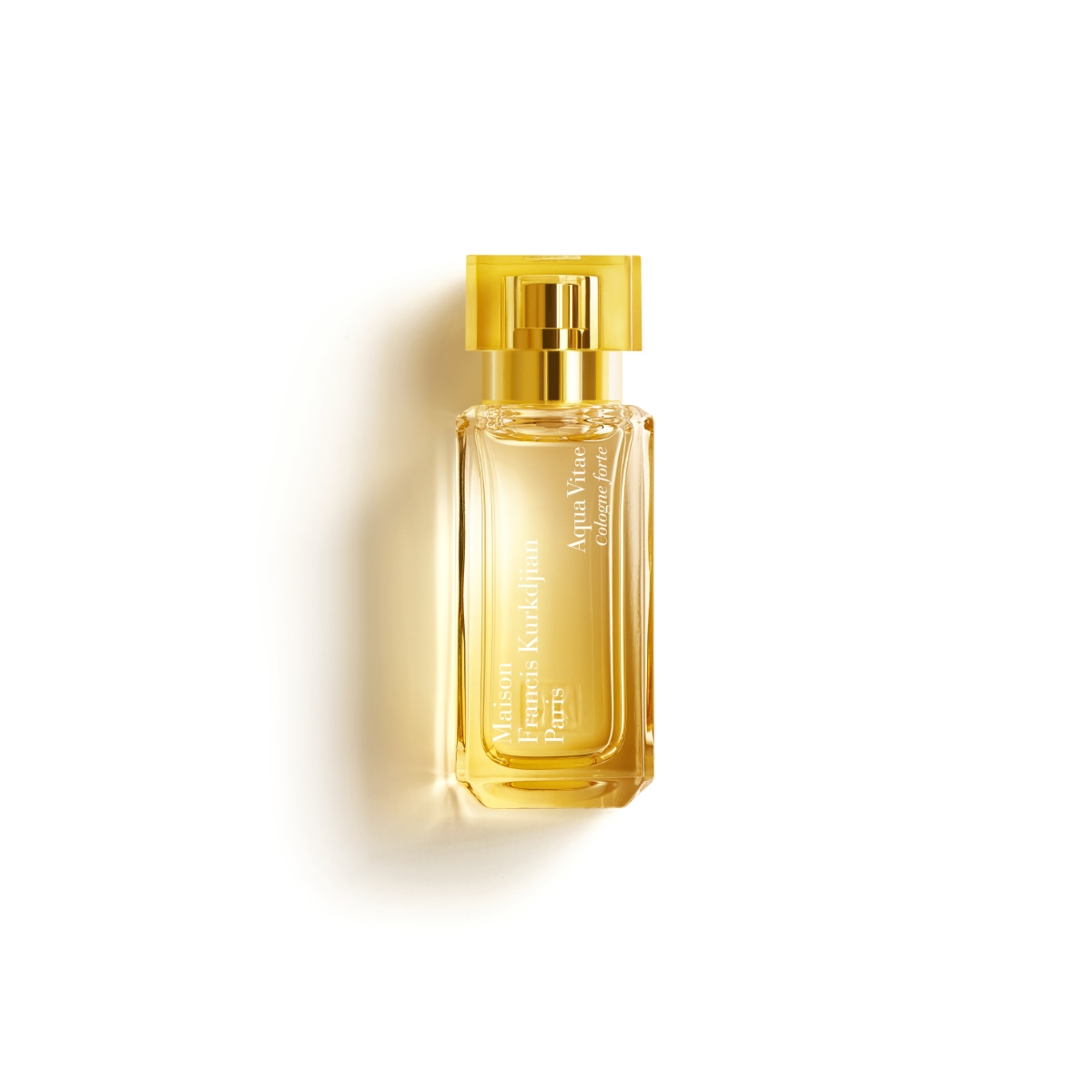 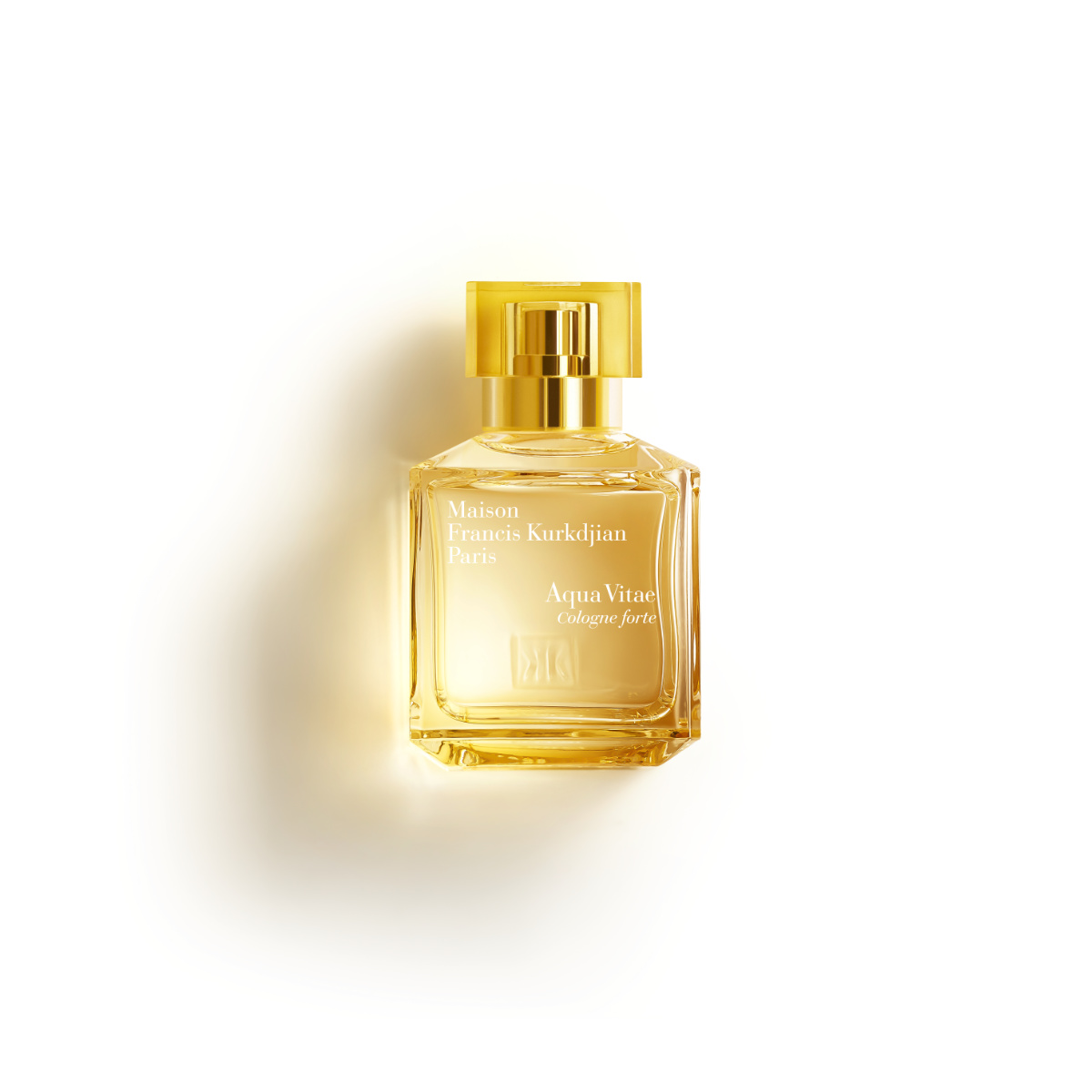 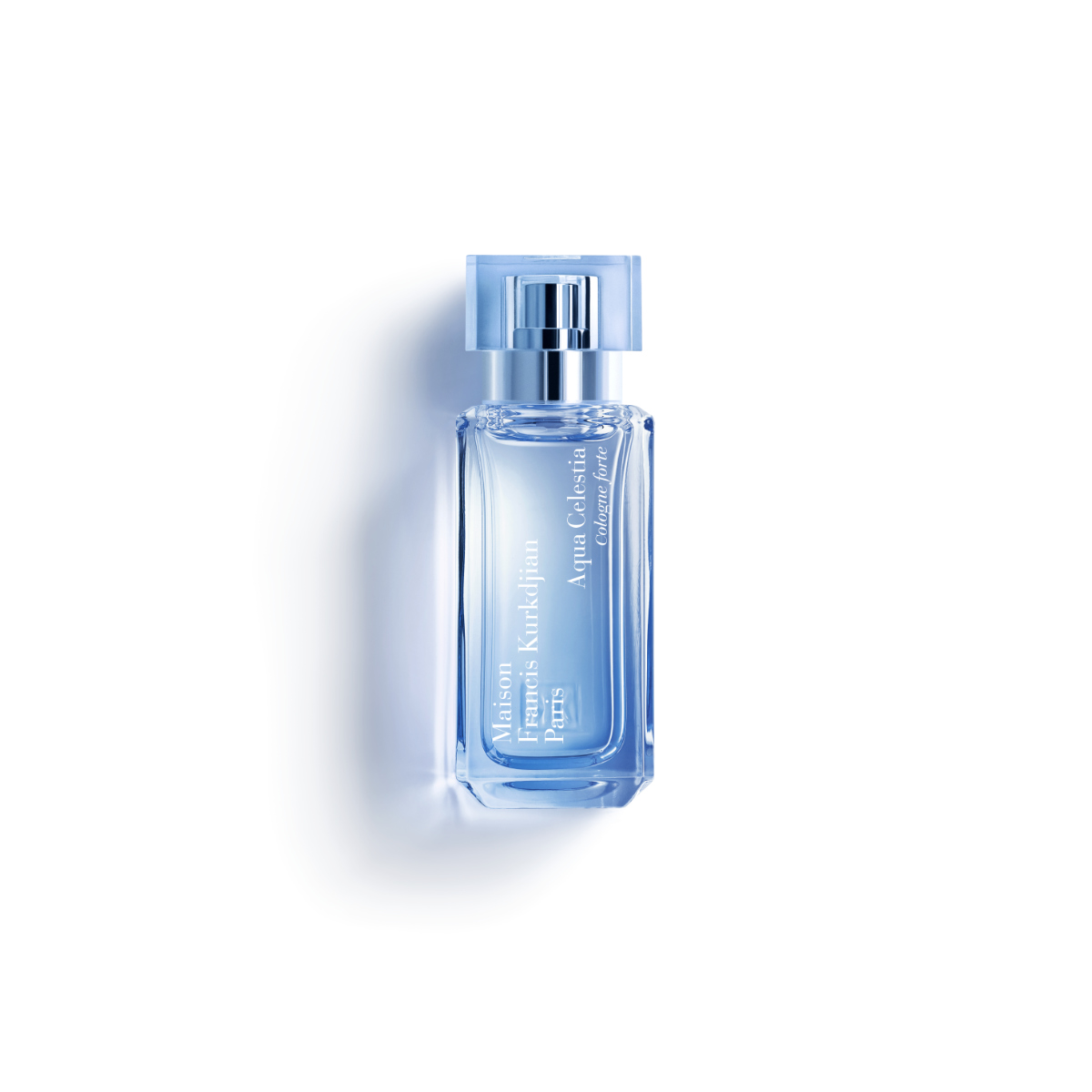 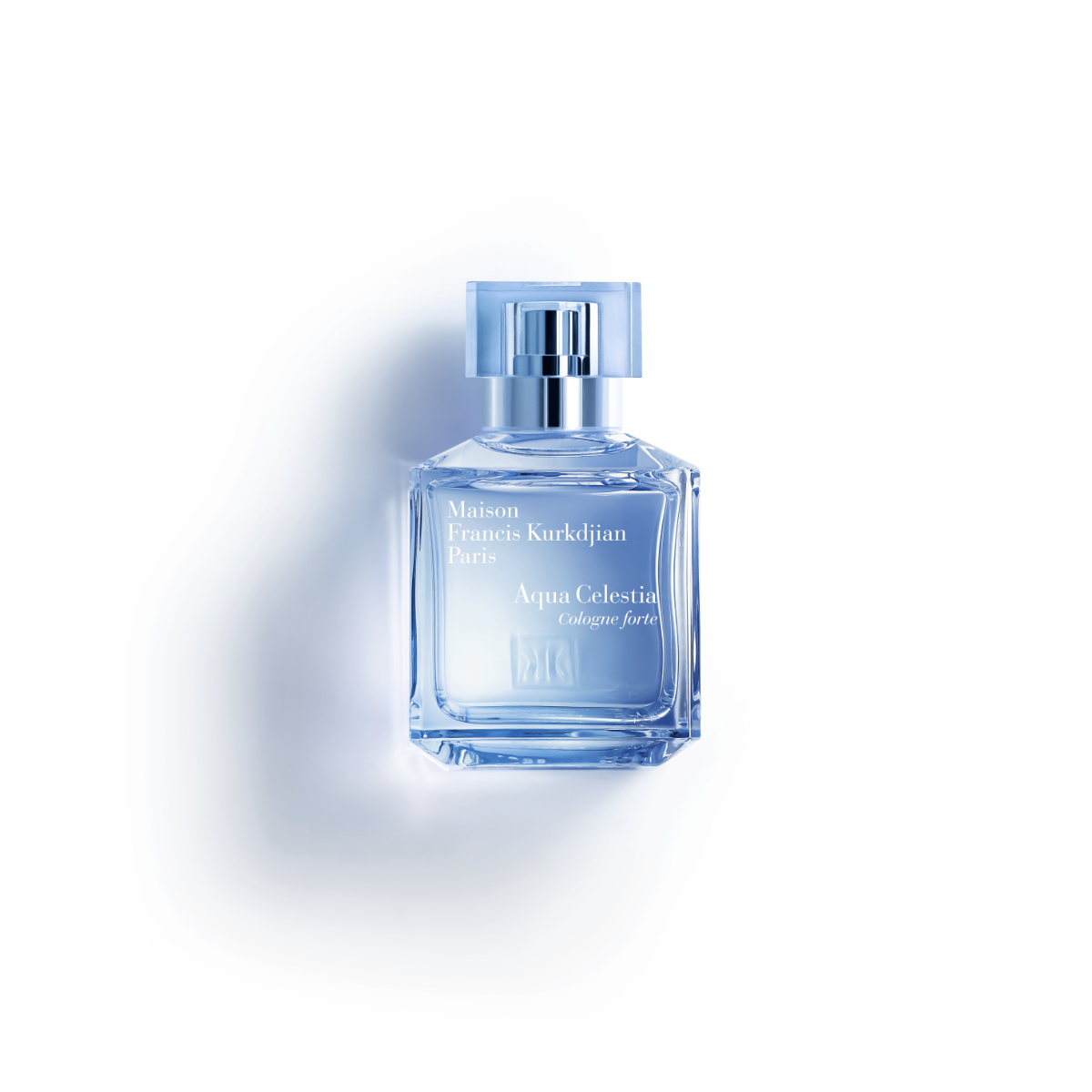 Colored bottles are very rare at the Maison. What inspired you when choosing these colors?

I wanted to give each bottle a color according to the light I had in mind for each perfume with a subtle bottom-to-top gradation. Only the Aqua Universalis remains unchanged. It symbolizes pure white, transparency and clearness of freshness. Aqua Vitae is nuanced in a sunny yellow shade and Aqua Celestia a translucent blue gradation. The cases are soberly underlined with a stroke of color which symbolizes the architecture of each note, a shade mirrored in the upper interior part of the case. Last, the cap is transparent to convey a feeling of lightness and let light seep through.

What is the concentration of these Cologne forte fragrances

It’s the duality between the freshness and the evanescence of the Cologne, and the duration of the trail, a distinctive feature of my creations, which results in the fragrances of this Cologne forte collection being classified as eau de parfum.

Bergamot from Calabria and the sweetness of a white musk accord are intertwined with an effervescent surge of diaphanous white flowers, such as mock orange and sweet pea. Aqua Universalis Cologne forte embodies the joy of whiteness, radiance, the purity of a breath of fresh, enveloping air. 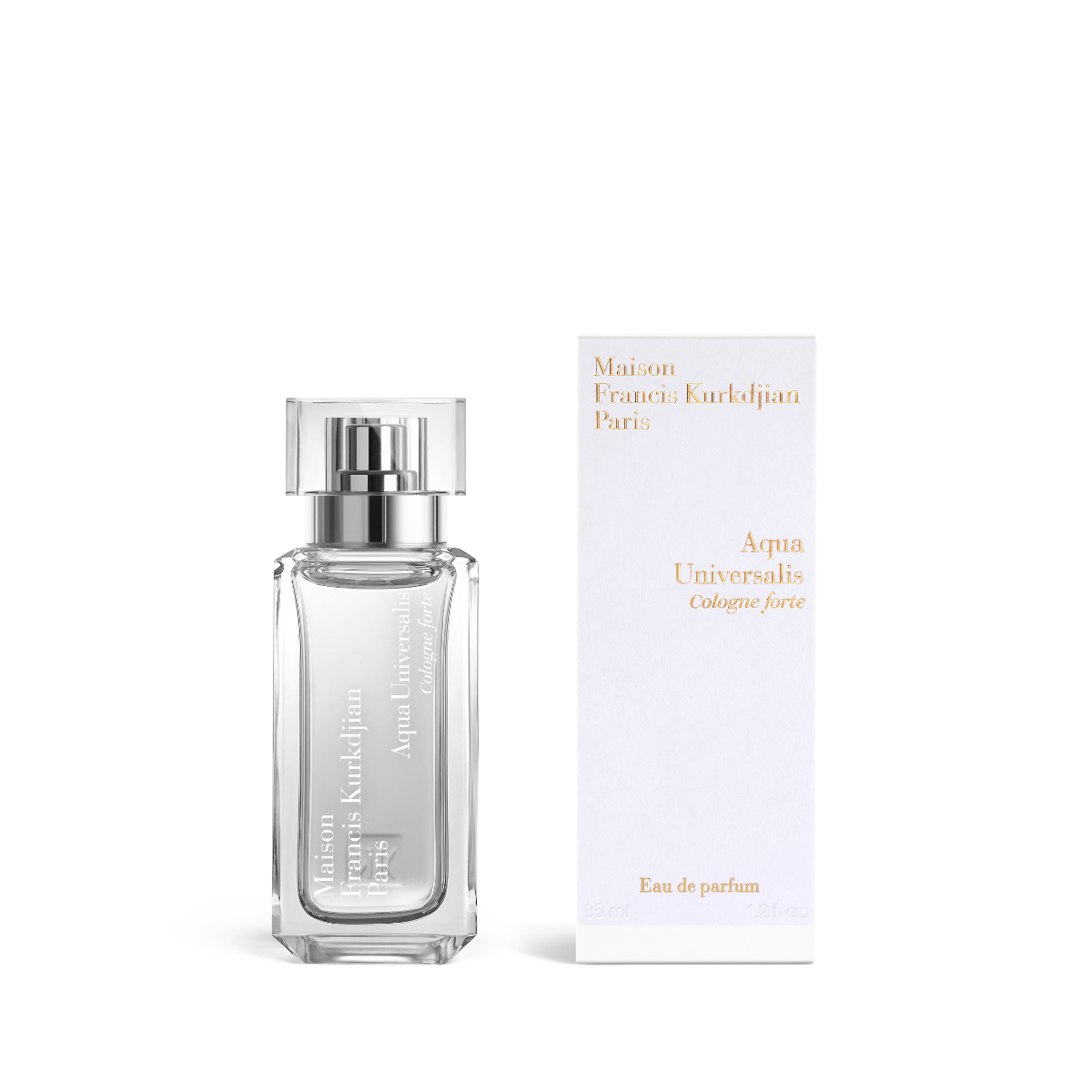 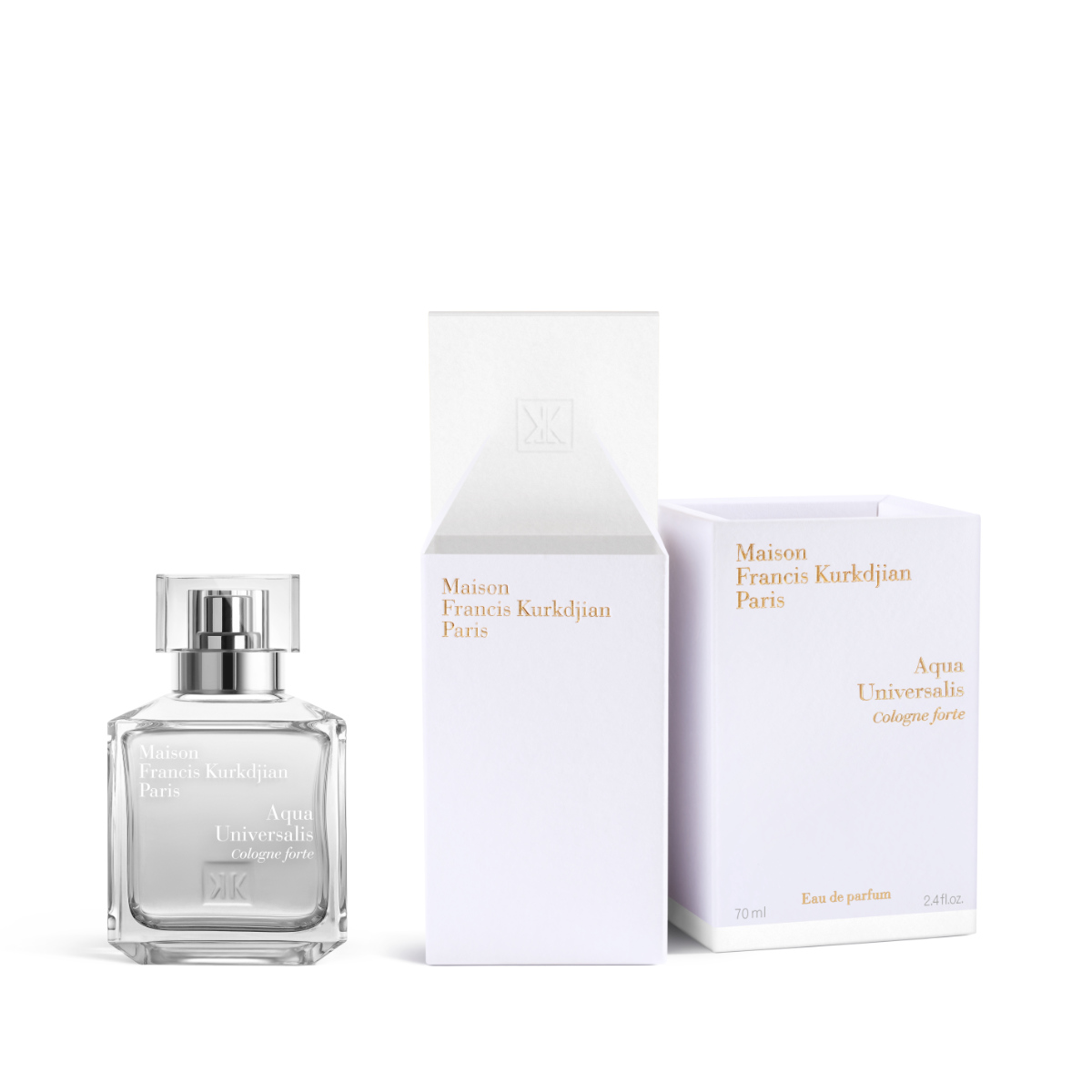 Mandarin from Italy gives bright freshness to the bergamot, leading to a luminous citrusy and sunny floral scent. Vibrating in unison in a halo of warm light, Aqua Vitae Cologne forte is a pampering eau de parfum whose trail is saturated with sun and sensual musks boosted by sandalwood from India. 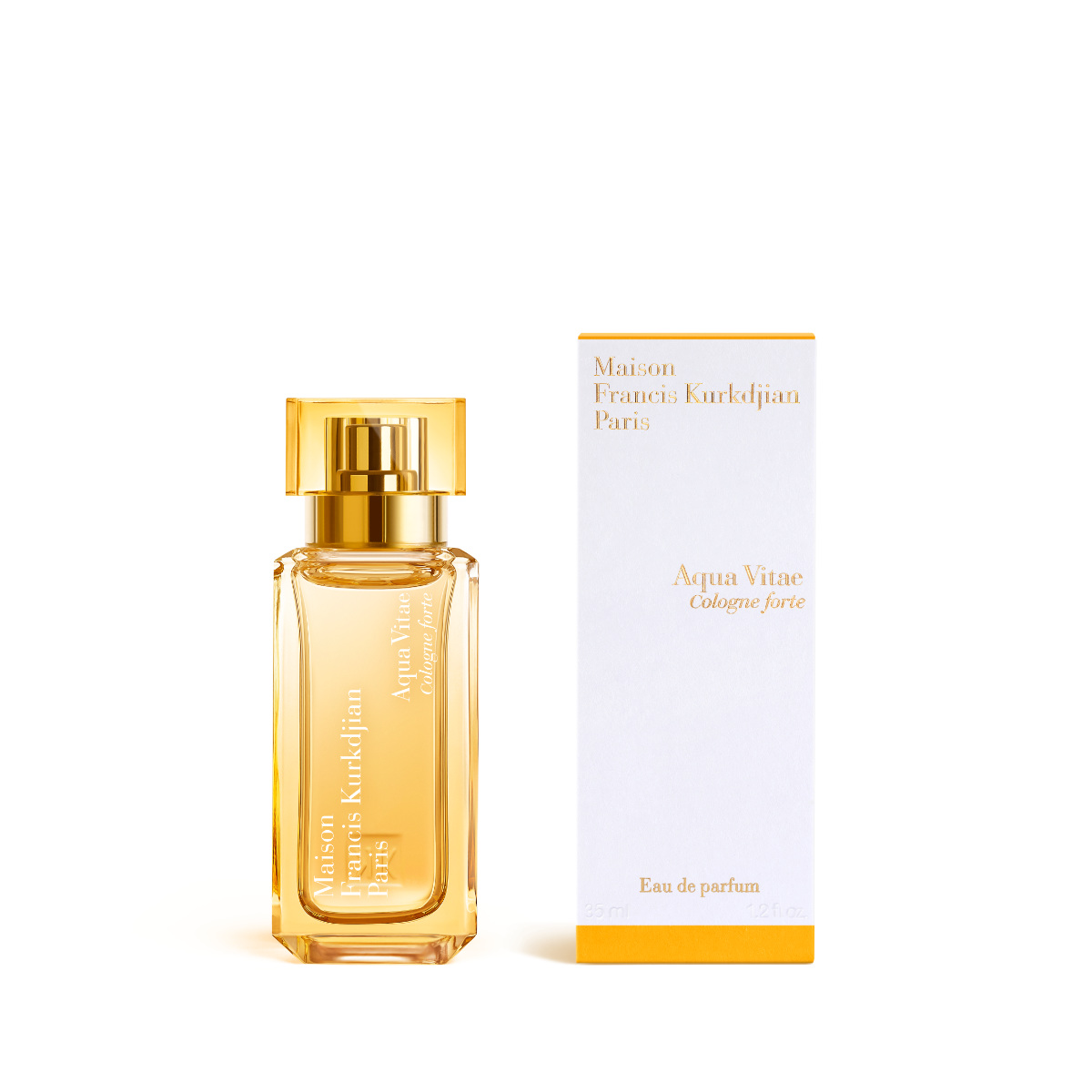 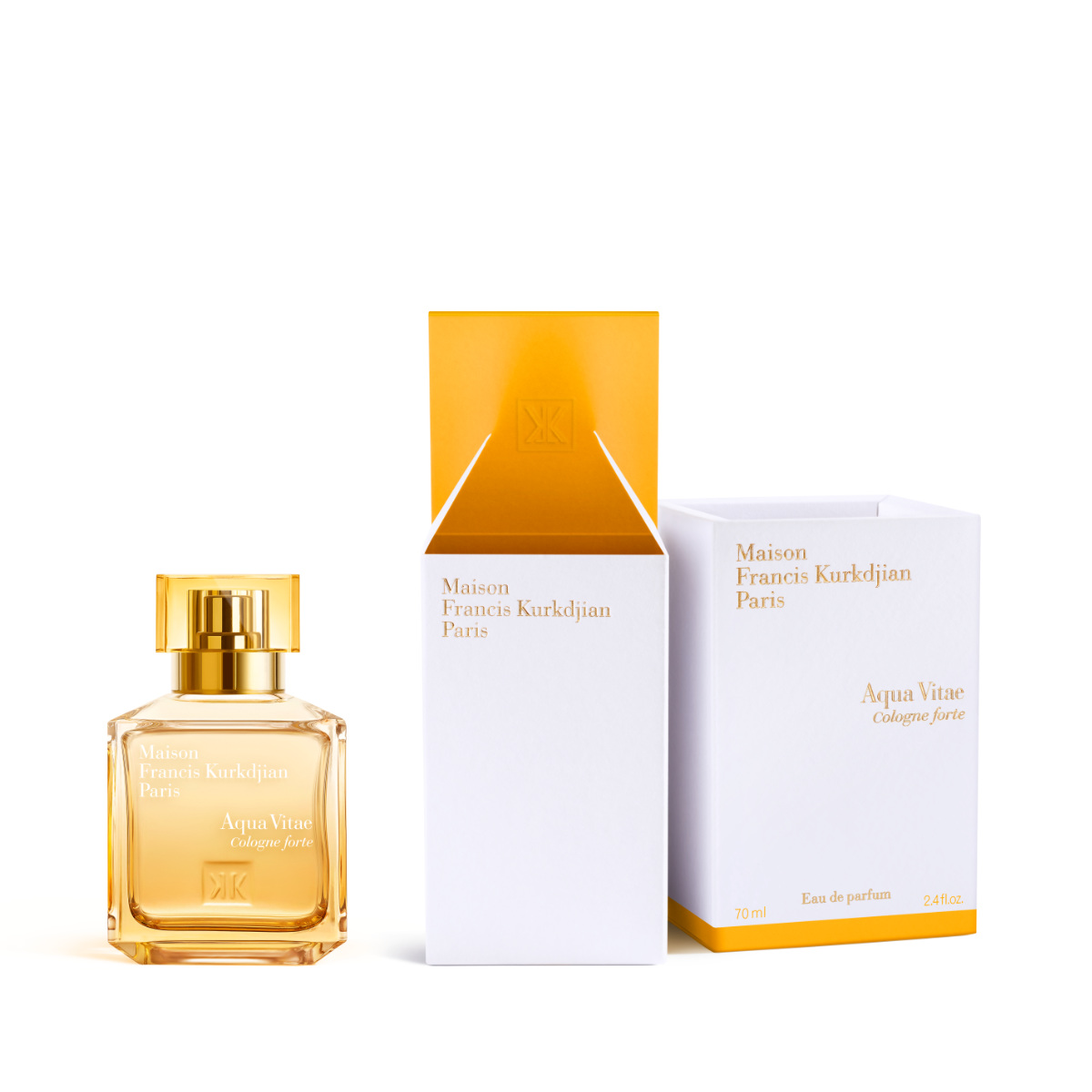 The bergamot becomes tinged with the fruity notes of blackcurrant, mimosa (with its raspberry and blackberry facets), and jasmine (strawberry, apricot and peach accents), before gradually melting into the mellowness of a fruity musky accord. Aqua Celestia Cologne forte releases a bright, crystal-clear aura and offers a flight towards the horizon. 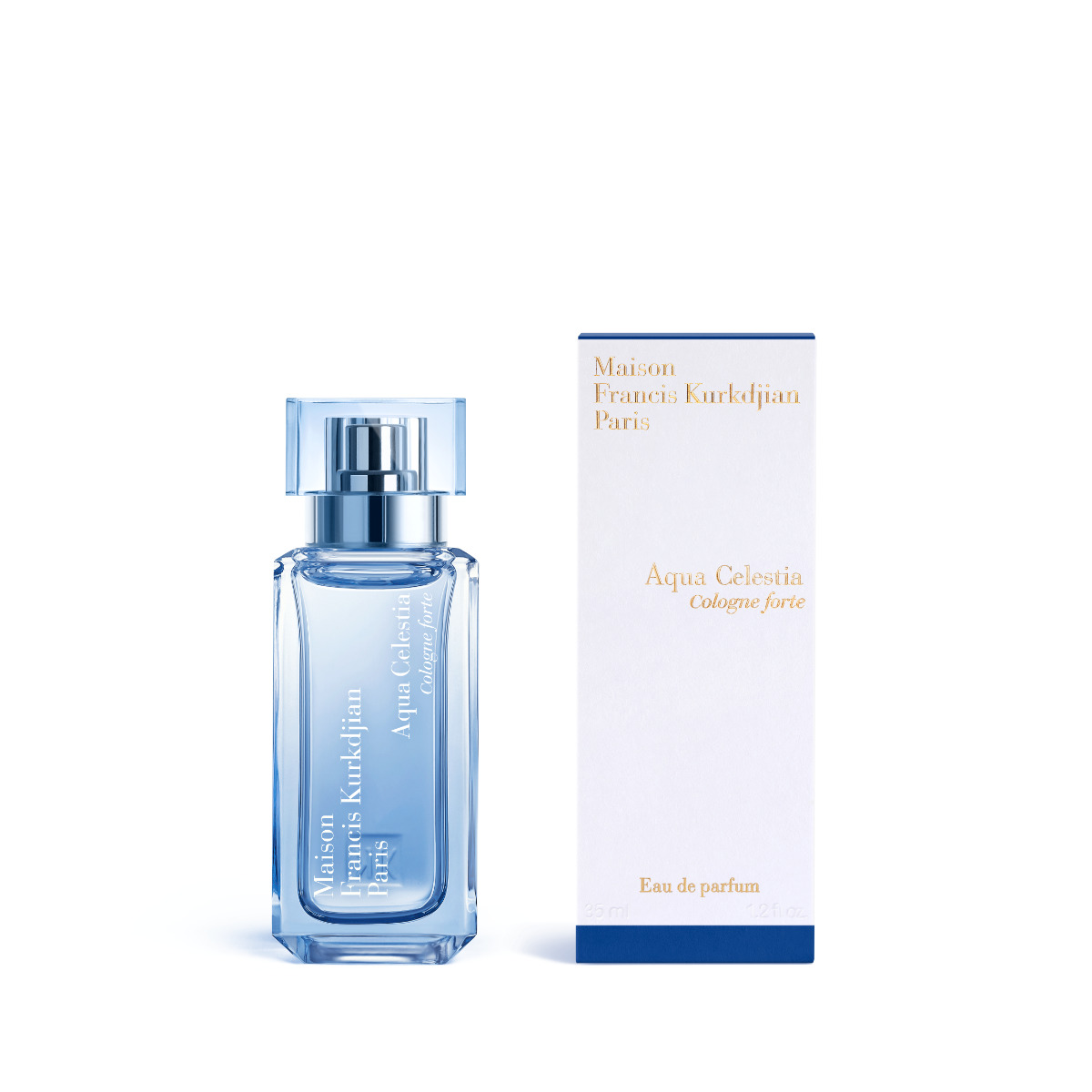 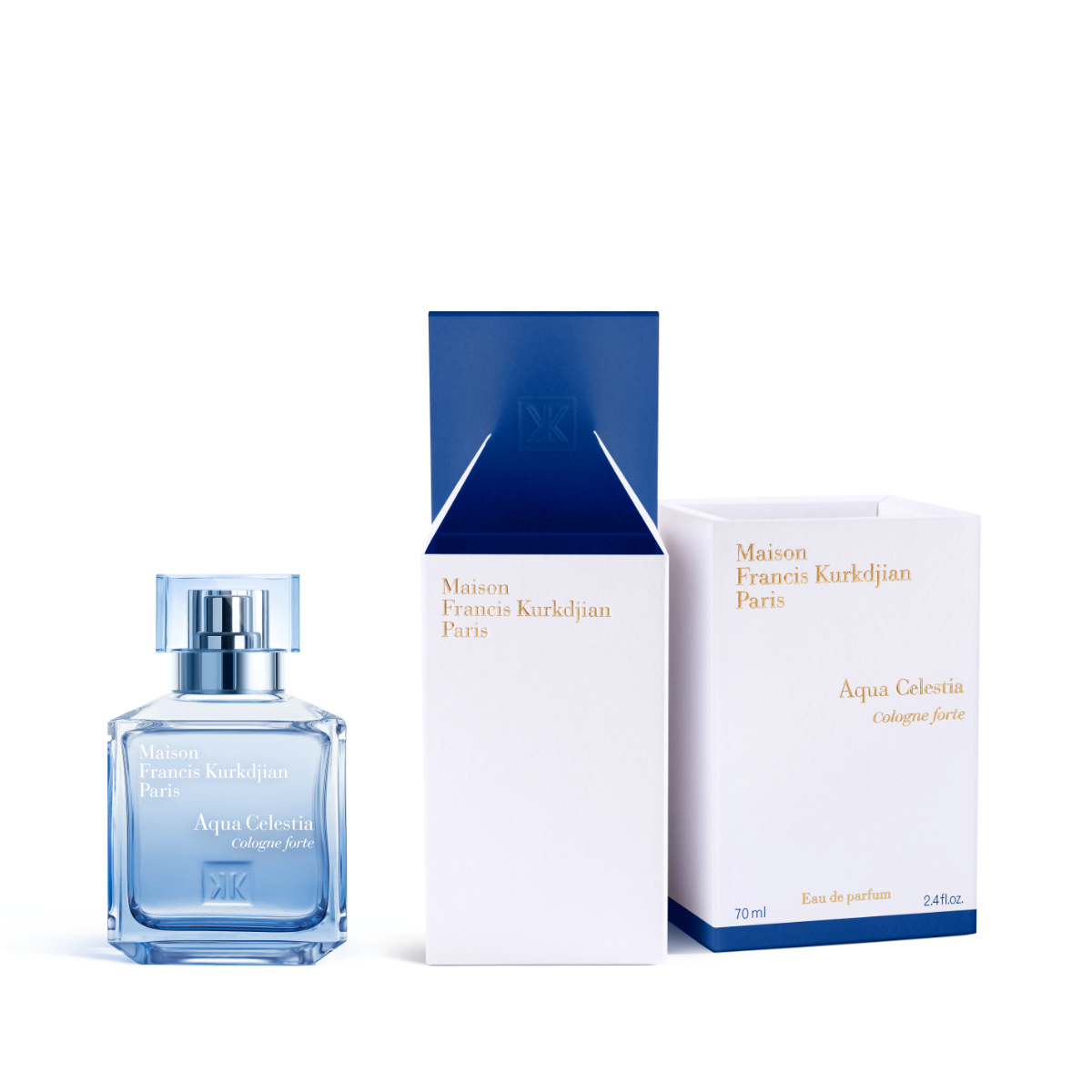