Today, more than ever, the world needs the power of creative freedom. A force to open up new horizons, to move us forward. A force to share and be shared. A force as powerful as love. A force that brings Lady Gaga and Dom Pérignon together.

This is the story of two creative forces. Two creators who believe in the power of absolute creative freedom, and the paramount importance of sharing it with the world.

On One Side, Dom Pérignon

The House that sees champagne as an act of creation that aims to inspire the deepest emotions and elevate people and moments.

Dom Pérignon is driven by one unyielding, absolute commitment: every vintage bears witness to a single year. With every vintage, Dom Pérignon pursues its never-ending quest of a deep aesthetic ideal: creating and revealing harmony from an everchanging nature, climate, and the unique constraints that every year brings.

And Dom Pérignon never compromises on this creative ideal – choosing to remain silent and not declare a vintage when a year falls short of this ideal.

On The Other Side, Lady Gaga

She reigns at the center of an exuberant, multifaceted, radical creative universe. Global music icon. Shape-shifting actress. World-builder, story-teller, cultural leader, always ahead of the times, always showing the way.

She is a woman of the 21st century – boldly speaking her mind, and driving change through her art, her commitments, her actions. Through her Born This Way Foundation, she has been at the forefront of empowerment and well-being issues for 10 years. She has been a powerful voice for the LGBT+ community. Her One World concert initiative raised over 120 million dollars for the World Health Organization and the frontline healthcare fighting the Covid-19 pandemic. And this year, she was honoured for her art and activism by the Martin Luther King Center.

When she reinvents herself again and again, she inspires the world to open up and grow.

The inspiration to create is not a choice. It is an unstoppable impulse that sustains you, that keeps you alive, that energizes you to break free and keep pushing boundaries.

Not just to create, but to create yourself, to write your own story – and rewrite it, again and again. This is what Dom Pérignon brings to life with every vintage. And this is what Lady Gaga embodies more than anyone, with unbridled energy.

Dom Pérignon and Lady Gaga recognize each other as kindred spirits. The connection is deep, sincere – and instantly, electrifyingly fruitful. Together, they write a story of mutual inspiration, of creative partnership and wide-open horizons. And Lady Gaga is a long-time aficionado of Dom Pérignon.

This champagne has accompanied her throughout her life as an artist, as an activist, as a woman, to elevate moments of celebration shared with family, friends, Little Monsters*…

What Lady Gaga discovered on closer acquaintance was the House’s history and the depth of a creative legacy and drive that dates back to the 17th century.

To learn about Dom Pierre Pérignon, the Benedictine monk who gave the House his name and ideals, is to learn about an unwavering work ethic, relentless discipline, a wealth of patience and precision.

Dom Pierre Pérignon’s lifelong ambition was to “make the best wine in the world”. His champagne earned a place at Louis XIV’s court in Versailles.

But what we really experience today is mastery honed over generations, at the service of an aesthetic ideal expressed anew in every vintage.

Across centuries, Lady Gaga and Dom Pérignon are brought together by the profound realization that a creative pursuit without craft, without work, cannot be fully realized. And that the work itself is the noblest reward.

Welcome to the shared universe of Dom Pérignon and Lady Gaga. A world born from the collision of their two effervescent energies. A celebration of creativity, in the form of an artistic experiment and a sculpture design by Lady Gaga. 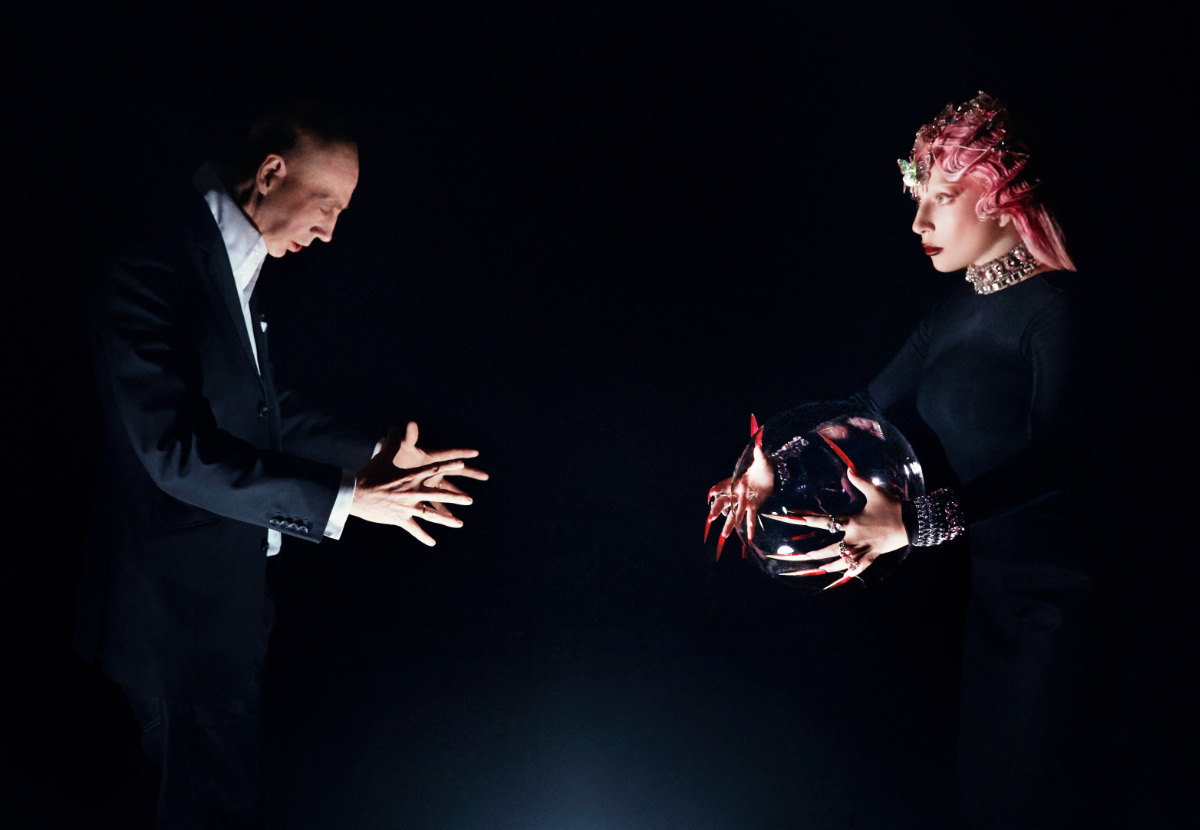 A constellation of creative personalities have come together to push the boundaries of what collaboration means.

is a visionary photographer and director. He has been a progressive image-maker for three decades, with era-defining campaigns. This collaboration brought him and Lady Gaga together again – a match
for her boundless creative energy. His imagination orchestrated this new confluence, by delivering a shared vision through electrifying and shimmering visuals. 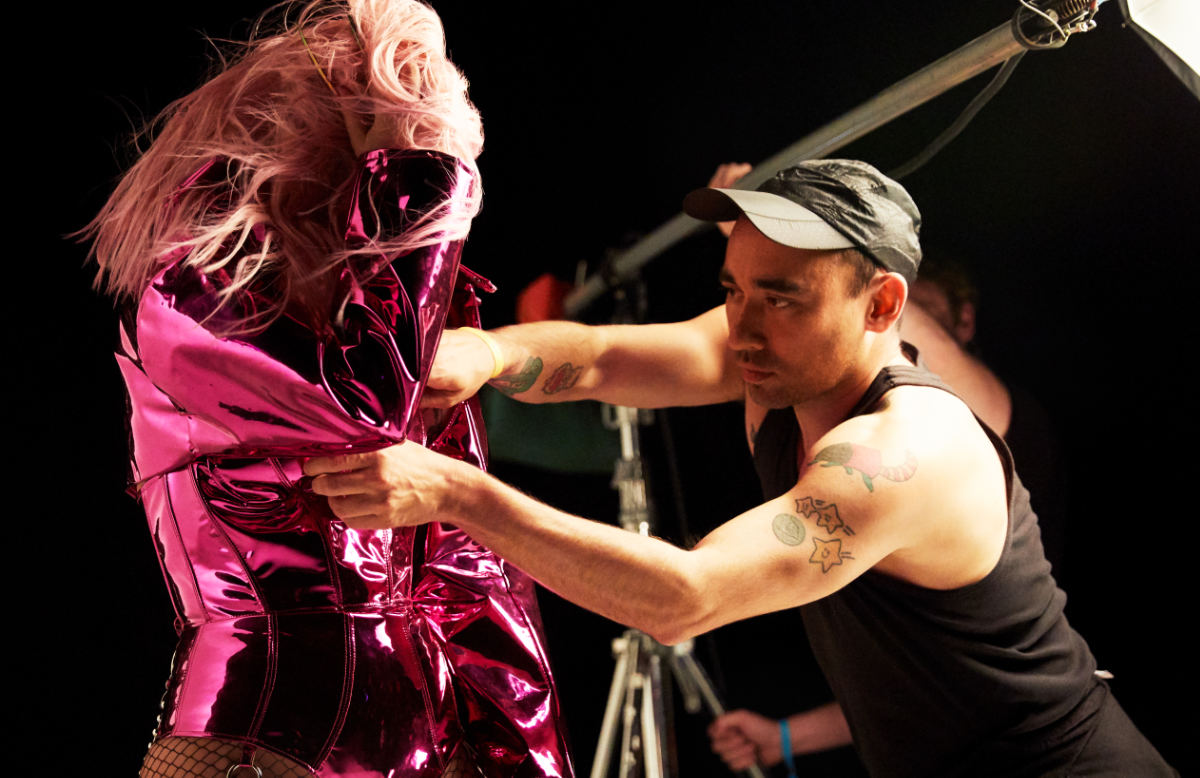 is a cultural icon. Creative and fashion director and editor as well as creative consultant to Haus of Gaga, he’s been creating magic with Lady Gaga since 2009. He brought the characters of this campaign to life, through his avant-garde stylistic vision.

needs no introduction. An acclaimed dancer, Lady Gaga appointed him in 2011 as her choreographer. His aim? To “change the game”. For this collaboration, he sets Nick Knight’s film in motion through his ethereal choreography.

is Lady Gaga’s resident make-up artist and global artistry director for Haus Laboratories. She has worked with Lady Gaga for over ten years and always aims to “add to the moment” and enhance expressions and emotions.

is behind Lady Gaga’s spectacular, wondrous hair creations. In his words, everything he does with Lady Gaga is “a creative experiment”. In this shared, exhilarating universe, he crafted Lady Gaga’s vibrant, timeless hairstyles – and a fantastic crown fit for a reigning Lady.

The Queendom - A Visual Experiment By Nick Knight

“My desire was to create a burst of positive fantasy – a beautiful world that exists only in people’s imaginations. Fantasy is such an important part of our lives; it makes us dream and fuels our creativity. And right now, the world needs celebration. I wanted to create something which would touch people across many different cultures, for its joie de vivre, its energy, its rush of fantasy and celebratory visions, ” Nick Knight, photographer & director.

The Queendom that Lady Gaga and Dom Pérignon bring to life is a radical expression of the electrifying, liberating power of creative freedom. A power they both embody and that we need more than ever. This universe is a celebration of creative freedom as an impulse that opens up new horizons for the world.

It invites us to move forward and embrace this power for ourselves, to encourage it and affirm it for everyone to see.

And of course, the Queendom is also a fabulous, exuberant, exhilarating celebration – a joyful convergence that rewards the inspiration to create, to reinvent ourselves and write our own story.

Everything in the Queendom is an expression of unbridled creativity.

Lady Gaga’s clothes display sumptuous colors and textures, blending with the background in swirling patterns of movement. In dappled light, they seem submerged in a world of softness and warmth. Her crown, her dresses, mix classical and avantgarde elements, making them timeless, elegant and luxurious.

In this bold swirl of refinement, a joyous parade accompanies her. They are participants in the game of life, reminding us that Dom Pérignon is created to be shared. The more you welcome like-minded creators, the better the celebration.

The intensity of the collaboration relies on the assembly of the elements that each creative personality brings. The choreography by Richard Jackson, the costumes by Nicola Formichetti, the hairstyles by Frédéric Aspiras, Sarah Tanno’s make-up and Miho Okawara’s nails… All combine to create a vibrant take on the concept of the power of inspiration. To serve as the music for the film, Lady Gaga chose her song Free Woman, from her album Chromatica.

The film and photos will be featured in an international advertising campaign that will debut on April 6 and run globally. 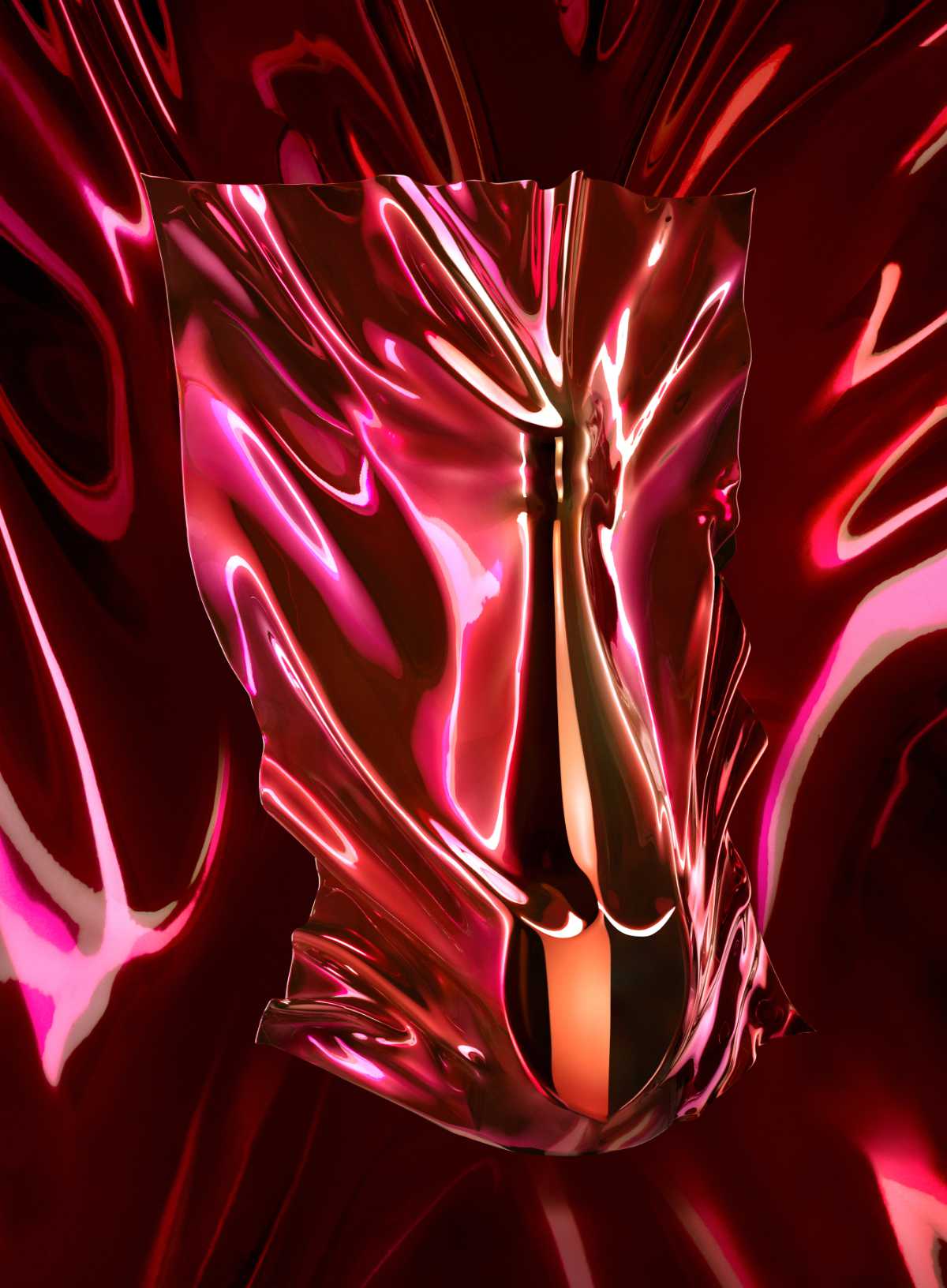 This year, the centerpiece of this  collaboration is not just an object of design and desire. It’s an opportunity to do more: a chance to give something back.

The swathe of iridescence reflects the flow and movement of a magnetic dress. The bottle itself appears to rise through its overlay, an incarnation of antigravity. Motion captured, frozen in time.

Designed by Lady Gaga for Dom Pérignon in collaboration with Nicola Formichetti, the enthralling sculpture acts as a veil, enfolding a majestic jeroboam of Dom Pérignon Rosé Vintage 2005.

Produced in 110 exclusive pieces, the limited-edition sculpture will be sold in private sales, and showcased in flagship Dom Pérignon locations. All Dom Pérignon’s profits from the uberpiece’s sale will be given to Lady Gaga’s Born This Way Foundation.

The Born This Way Foundation, launched in 2011 by Lady Gaga and her mother Cynthia Germanotta, supports the well-being of people and works with them to create a kinder and braver world through campaigns and programs such as Channel Kindness or #BeKind21 Events. 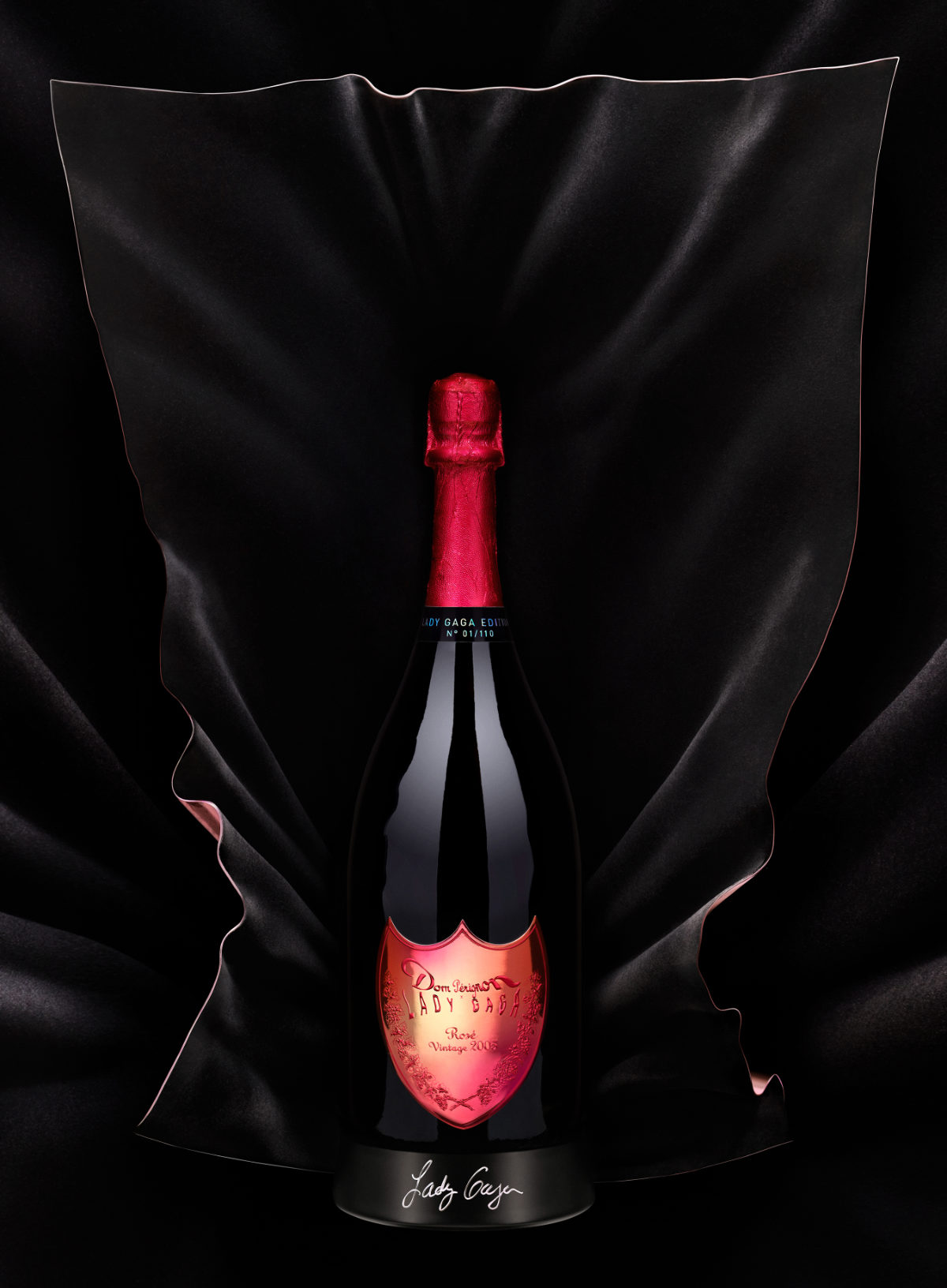 Dom Pérignon Rosé: The Symbol Of The Collaboration

When Lady Gaga delved into the depths of the house’s history, her attention was particularly caught by the radical boldness behind Dom Pérignon Rosé, making it the perfect vessel for the collaboration.

When Dom Pérignon chooses to be rosé, it is a radical declaration of freedom. Freedom to explore. Freedom to cast aside conventions and push the boundaries of creation.

Dom Pérignon Rosé springs from this desire to dare, seizing the red of the pinot noir grape in its primal radiance, capturing its vital power in a bold, assertive assemblage. Tempered by a slow, masterful transformation during nearly 12 years in the cellar, Dom Pérignon Rosé is untamed and carnal, both light and dark, magnetic.

Its vibration embraces the thrill of the unknown and is an invitation to explore – and enter the world Lady Gaga and Dom Pérignon created together. 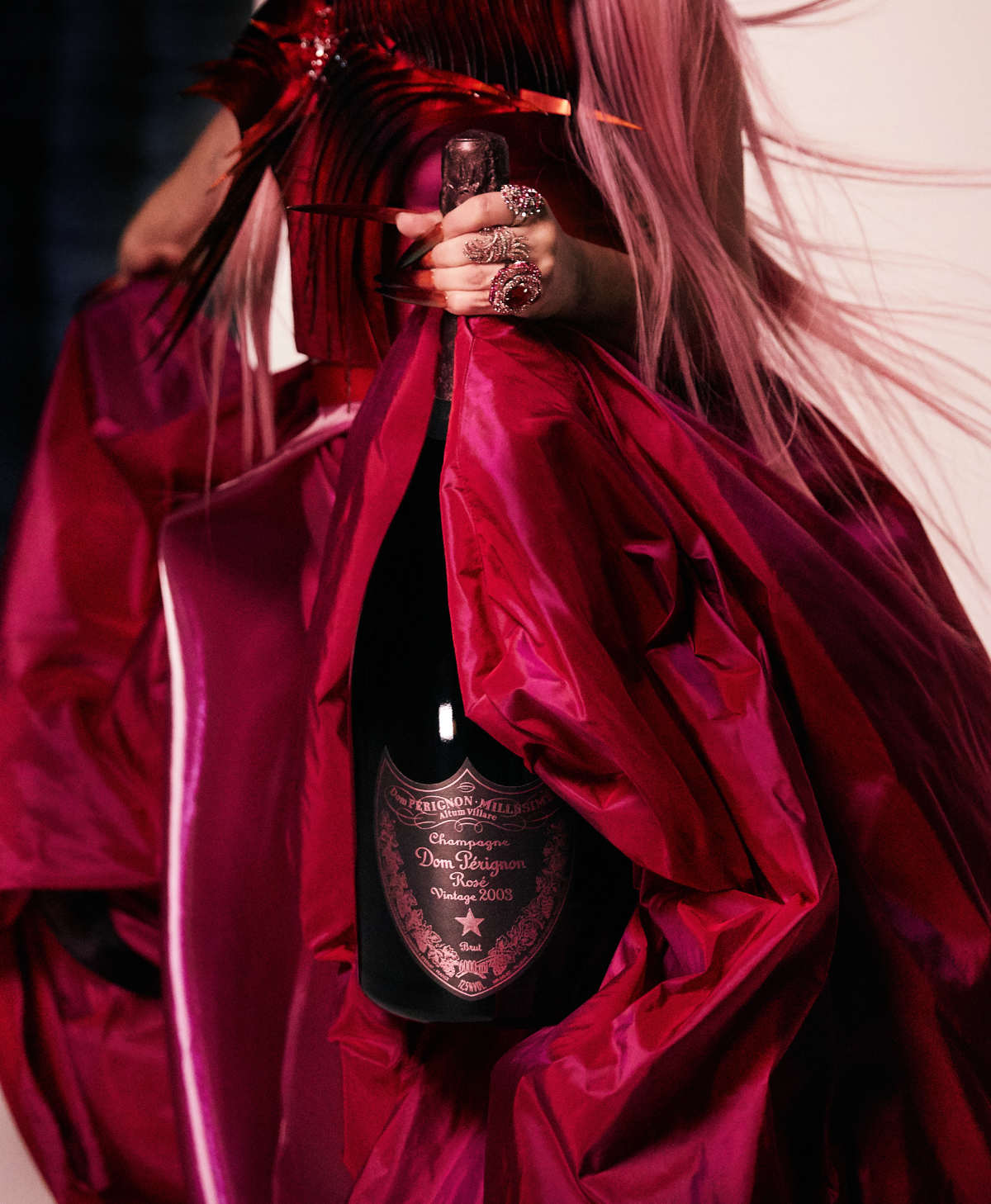 Together, lady gaga and dom pérignon encourage us to join them in their continually renewed quest for harmony.

The inspiration to create is the force that drives both Lady Gaga and Dom Pérignon.

They are united in the desire to break new ground, to experiment, to explore. Each in their own way, they never stop reaching for the stars. And by doing so, they inspire us all to move forward.

The world Lady Gaga and Dom Pérignon invite us to discover is a positive, exuberant affirmation of the transformative power of creative freedom. It celebrates how pushing boundaries, constant reinvention and passionate, tireless dedication to one’s craft can elevate us, individually and collectively.

They invite us to open up new horizons, experience profound emotions and share wondrous memories along the way.

Over the next two years, Dom Pérignon and Lady Gaga will announce further exciting outcomes of their collaboration.

In the fall, Dom Pérignon will release a Limited Edition of Vintage 2010 and Rosé 2006 in exclusive and creative cases.

As their journey together continues, we can’t wait to see what other exciting expressions this radical collaboration will produce. This is how the story unfolds. But it is far from over. 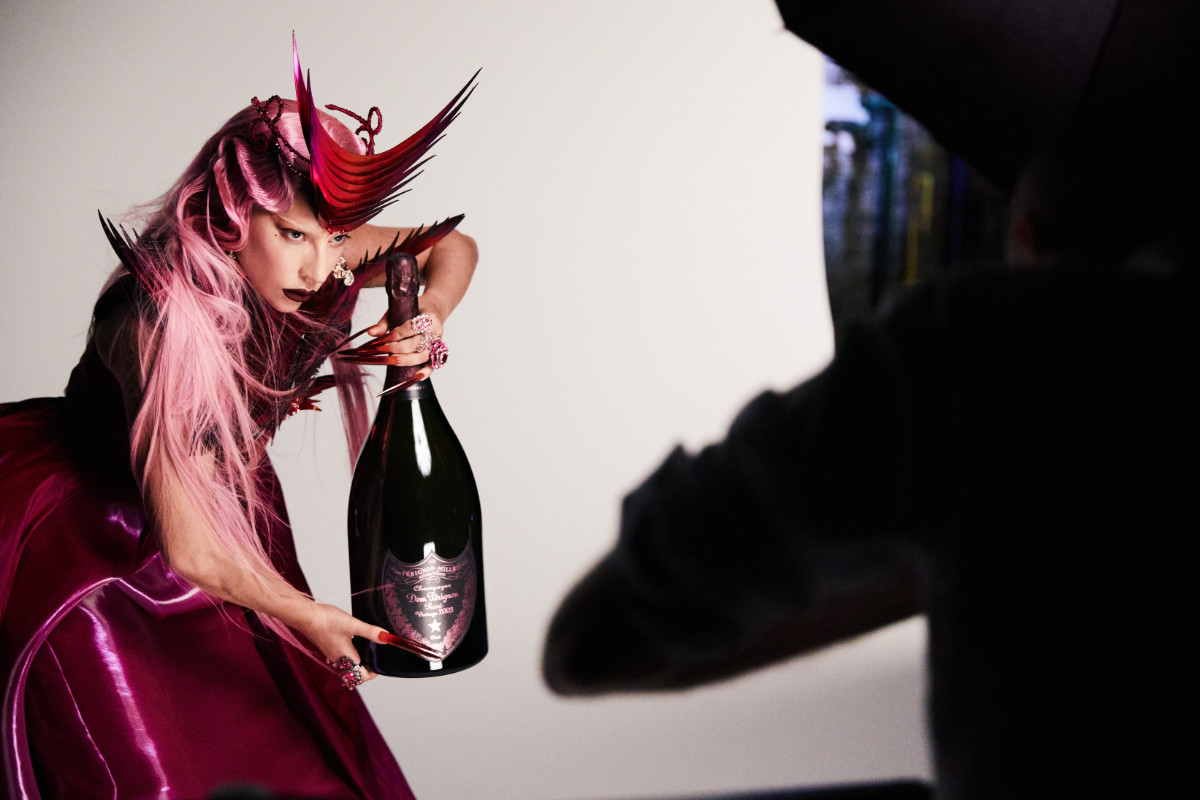